Cycle the famous Golden Circle, where the scenery is just as likely to get your blood pumping as the ride. There’s a lot more to Iceland than ice (and Bjork). Ford the fjords, glaciers, volcanoes, black sands and thermal springs of this magical land in the world’s far north. The Eurasian and American tectonic plates may now be pulling apart in Thingvellir National Park, but over a thousand years ago this was the site where Iceland’s first parliament came together. Southern Iceland is a world of striking contrasts. Walk past blue-white icebergs at the Jokulsarlon glacier lagoon, and soak up the silence of the surrounding grey sand desert

Travel to Iceland and delve into the ancient land of Vikings and volcanoes on this 9-day Icelandic cycling adventure. Marvel at geothermal hot springs, witness the steamy eruptions of a giant geyser, touch the tongue of Europe’s biggest glacier and scale giant waterfalls. Travel through Iceland’s desolate lands, so mysterious and ethereal that they have inspired artists, poets and musicians for centuries. The ancient, untamed beauty of Iceland will stay with you forever. 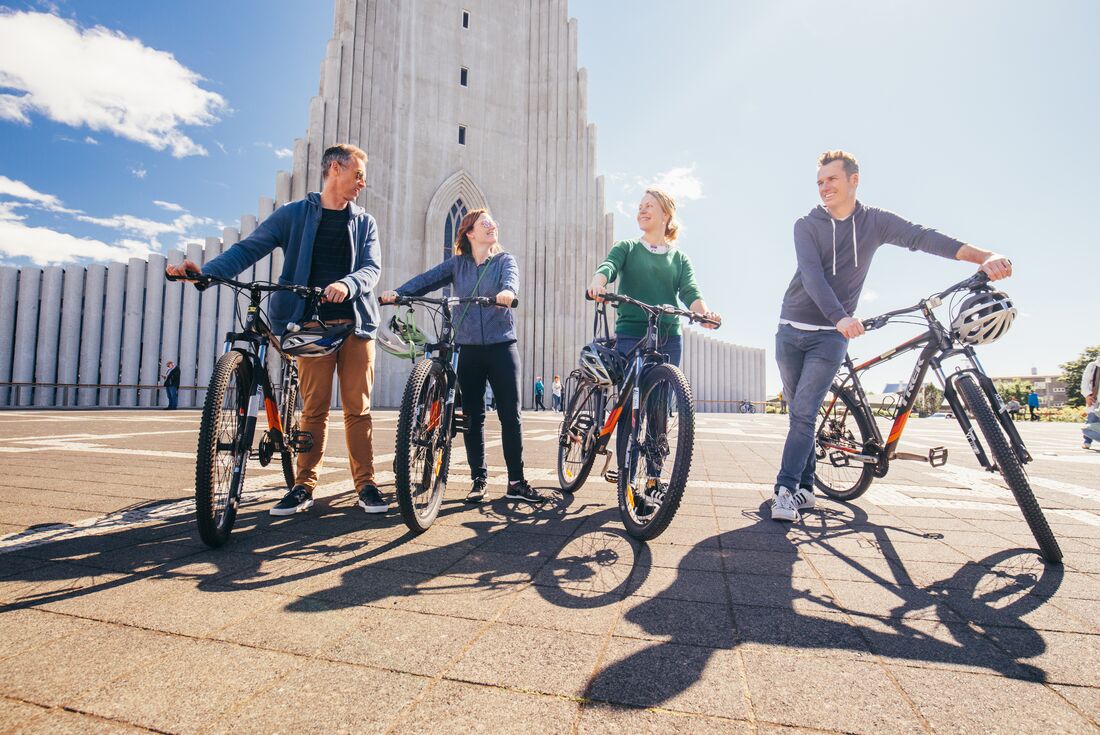 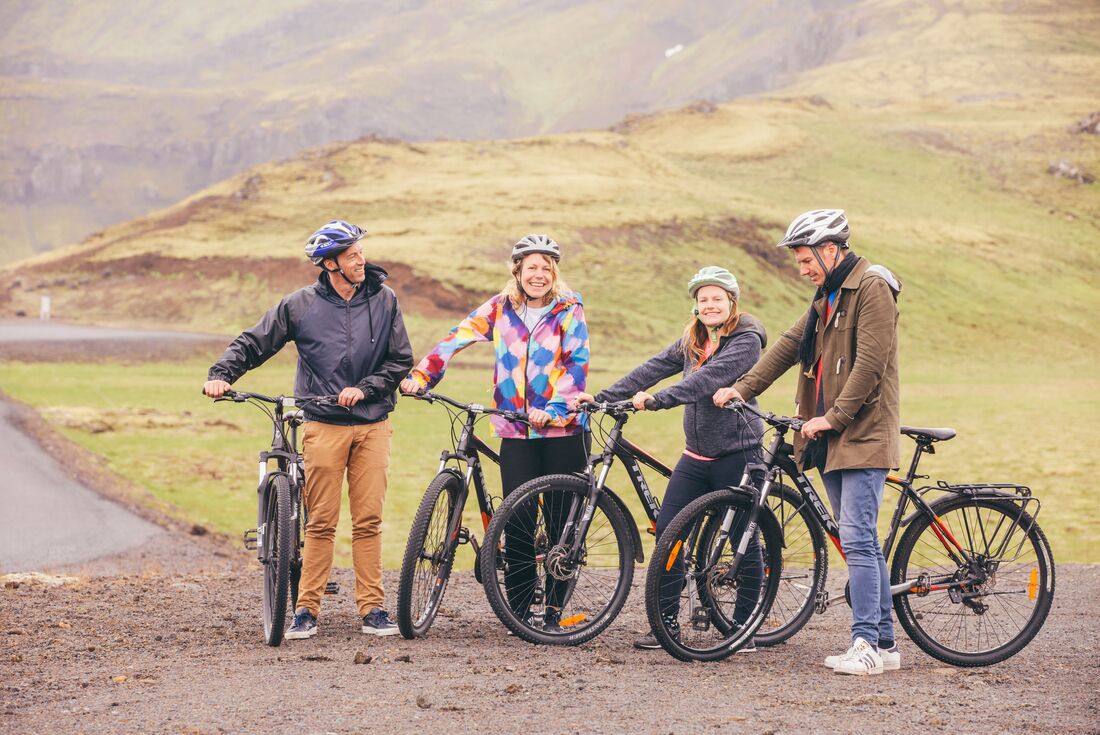 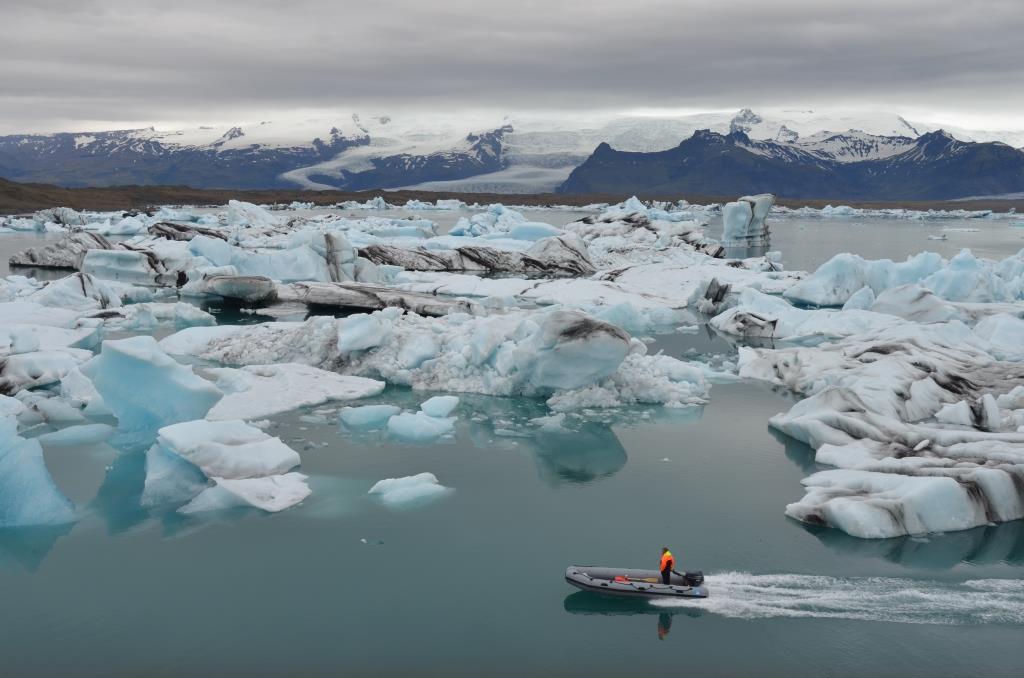 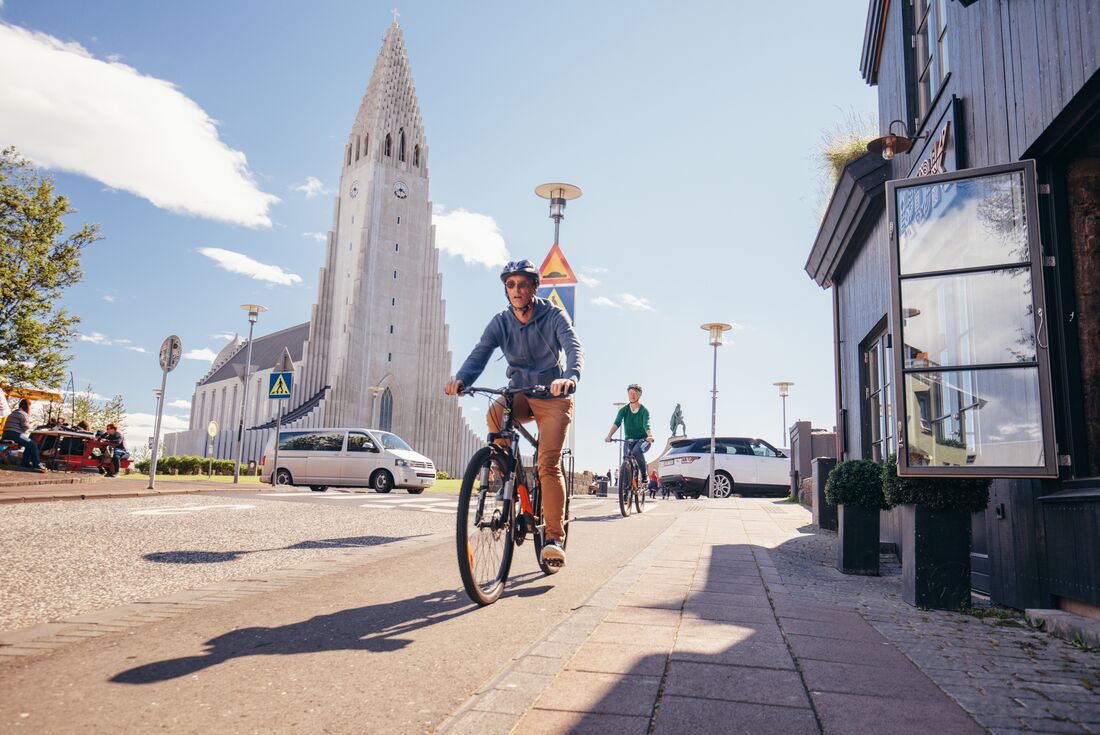 Welcome to Reykjavik, where colourful houses and striking expressionist buildings are set against a backdrop of blue-grey mountains. Your tour begins at 6 pm with a welcome meeting at your hotel. It’s important you attend this meeting, as we’ll be collecting your next of kin and insurance information. If you can't arrange a flight that will have you arrive in time for today's meeting you may wish to arrive a day early so you're able to attend. We'll be happy to book additional accommodation for you (subject to availability). If you're going to be late, please inform the hotel reception. With that out of the way, you’re free to spend your evening how you like. Reykjavik has a lively food scene, so perhaps ask your leader for recommendations on where to grab a bite. Modern Icelandic food is hearty and steeped in Viking tradition, meaning it’s designed to sustain and keep you warm during periods of physical activity – perfect considering the first leg of your cycling tour starts tomorrow.

Today you begin your cycle around the Golden Circle, and the scenery is just as likely to get your blood pumping as the ride. Head out of Reykjavik through valleys of green and gold shrubbery. Your first stop is Thingvellir National Park, the historic spot of Iceland’s first parliament and the location of the Silfra Fissure, where the North American and Eurasian tectonic plates are slowly pulling apart. You can see the water pooled in the gap between the plates and cycle between craggy cliffs that sprung from the earth because of the grand geological shift. Then, peddle to Laugarvatn, a shallow lake kept warm year-round by hot springs. This is the last stop on today’s 90 km journey, so you might want to soak your muscles in the natural pools or spa. Spend the evening at Efstidalur II, a comfortable farm hotel.

Today you continue riding along the famous Golden Circle. There’s no better way to appreciate the immensity of this ancient environment than from your bike, close enough to see the often black volcanic ground around you and guided by giant mountains. Pull up at Geysir, where the ground is alive and geysers spurt water high into the air. Bike between the various bubbling mud pools and spitting earth in this geothermal hotpot. Then, ride about ten kilometres to nearby Gulfoss, a mighty waterfall that spills down two tiers into a 70-metre-deep canyon. Breathe the crisp Icelandic air on the tail end of your 76 km ride, hunkering down for the evening in a campsite in the tiny town of Brautarholt. Tonight is camping.

Waterfalls of the South

Today you’ll be biking 104 kilometres, so ease into it with a ride in the support vehicle, alighting to peddle along the side of vast (and partially active) Eyjafjallajokull. You might remember it as the source of much panic and grounded flights after it erupted in 2010, spewing ash far and wide. This towering, glacier-capped strata volcano will be your silent guide as you ride past some of the spectacular waterfalls that dot the south of the country. As you’ll remain close to the coast today, there might be an opportunity to park your bike and hike to the wreck of a US Navy plane that lies on the black sands of Solheimasandur Beach. Even if weather or time doesn’t permit that little venture, the views along the South Coast are stunning, and you’ll spend the evening in at a guesthouse in Solheimahjaleiga – close to the black shore that the country is famous for.

The columns of basalt rise like small skyscrapers from the ashen sands of Reynisfjara, your first stop today on a 92 km journey. From the shore, you can see staggering rock pillars that jut from the ocean. Next, you’ll hop on your bike and cycle near the fire-lava field of Eldhraun, weaving between bizarre lumps and bumps created by an eruption hundreds of years ago. At 565 square kilometers, this vast, moss-covered terrain is an endless source of wonder. Later, get some well-deserved rest at the Klausturhof Guesthouse, nestled in the hamlet of Kirkjubaejarklaustur beneath picturesque mountains.

Hit the road again and cross the vast, arid sand plain of Skeidararsandur. The most extensive of its kind in the world, this desolated plain was formed by glacier meltwater post-eruption. Skeidararsandur announces the proximity of Vatnajokull – the largest ice cap in Iceland. The runoff from this epic glacier has created a river that splits the giant sand plain in two. Ride further into the wilderness of Vatnajokull National Park, taking in the brown and white peaks and perhaps stopping at Svartifoss Waterfall, where black basalt columns frame a narrow cascade. Setup camp in Skaftafell, completing today's 71 kilometre ride. Tonight is camping.

The icy crown jewel of Iceland, the Jokulsarlon Glacier Lagoon awaits after a morning of cycling along rocky coast. This glacial lake has only existed for less than 100 years, and continues to swell as temperatures rise. If you’d like, you have the option to explore the lagoon via the water. Board an amphibious vehicle (half car, half boat) to get the most awe-inspiring views of the jagged icebergs floating in this natural lagoon. If you’re lucky, you might even see sea seals swimming gliding through the water or resting on icebergs. Otherwise, you are free to bike or walk along the shore, taking in the majestic views of blue and white waters. Today you’ll travel just 67 kilometres, and your guesthouse for the evening – Reynivellir – is close to the lagoon, meaning you can get the most of this feat of nature.

It’s time to sit back and relax on the long return drive to Reykjavik. The 400 km drive will take about six hours, so you might want to have a book or podcast ready to pass the time. It’s also a good opportunity to soak up the scenery you’ve come to know and love over the past week. Upon arrival in the capital, you can choose to attend an optional group dinner to bid farewell to your leader and cycling pals.

Your journey comes to an end today.