Act like Mowgli on the hunt for Shere Khan in your own real life version of ‘The Jungle Book’. You’ve not truly seen the Taj Mahal until you’ve got up at the crack of dawn and watched the sun rise above it. Seeing the building glow in the early morning light is truly magical. Cruise around the Malabar backwaters onboard a traditional Keralan houseboat, complete with carpets – have fun with locals, and maybe try your hand at fishing. Get back to nature as you safari for rare animals in Periyar National Park – a prize for the one that spots the tiger or leopard!

Travelling through India is like turning up everything in your life – the volume with the throbbing streets of Delhi, the colour with the markets and spice bazaars, and the brightness with the sight of the white Taj Mahal. Take the family on an adventure through the north and south of India, through the unique cities of Delhi, Agra, and Jaipur, then fly to the relaxed south to float worries away on the waters of Kerala and Kovalam. Live out the ‘Jungle Book’ life in the forests and jungles of Periyar and Ranthambore. From landmarks to national parks, this adventure has it all. 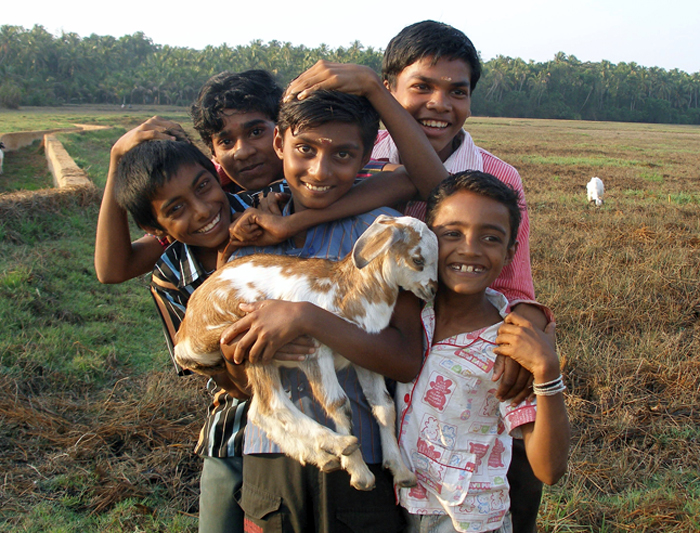 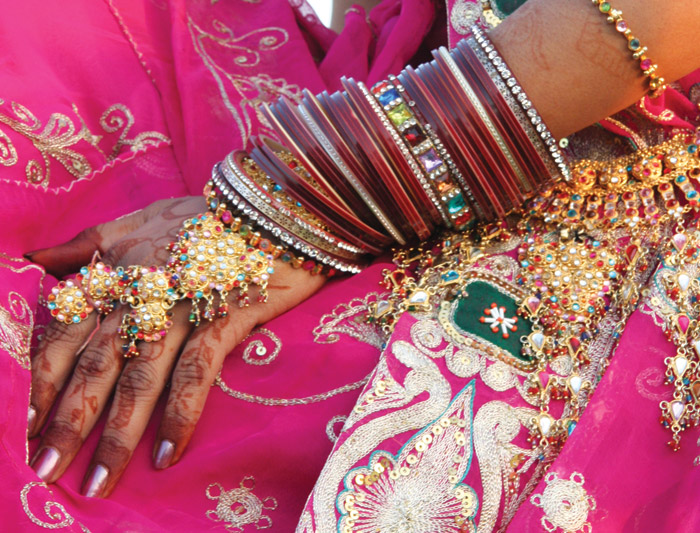 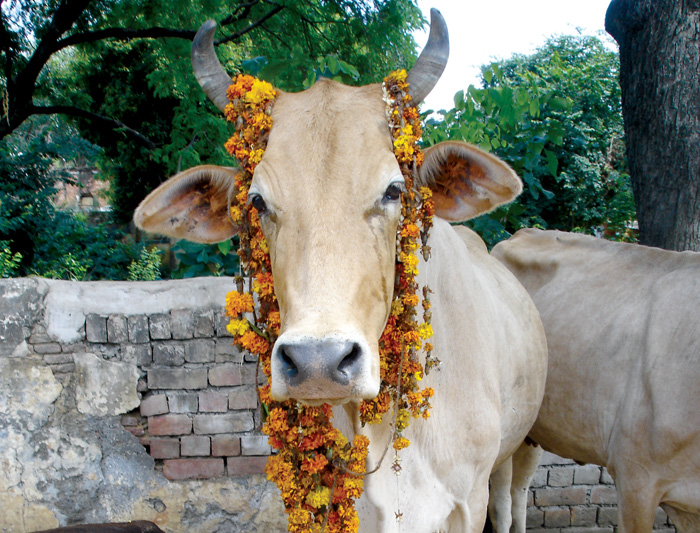 Namaste! Begin your Indian adventure in one of the oldest cities in the world, Delhi, a suprising city of magic and mayhem. There’s a Welcome Meeting today at 1pm. You can arrive any time beforehand as there are no activities planned until then. India's capital is an exciting and often chaotic city packed with historical sites, museums, galleries, shops and endless bazaars. Take a guided sightseeing tour to explore the contrasts of Old and New Delhi. Squeeze through Old Delhi’s fortified walls on the way to visiitng Jama Masjid mosque. Then, leave the crowds behind and breathe a little easier in New Delhi with its broad, tree-lined avenues filled with monuments to former British rule.

Rise early to catch the morning sun and a train to Agra (approximately three hours). The city once alternated with Delhi as the capital of the Moghul Empire, and it still grips to its glory days linked with the most famous of India’s rulers. On arrival, take some time to relax after the early start until mid-afternoon, before heading out to see the city’s big attractions. Agra’s not just about the Taj Mahal, it’s also home to one of the finest looking forts in India, a Friday Mosque and royal tombs.

This is one very early morning start that will be worth the effort. Get up before the sun to see it rise over the Taj Mahal. Watch the iconic building bathed in early morning light. Many people believe it to be the most perfectly proportioned building ever constructed. At first glance it appears to be simply white marble, but closer inspection reveals that the surface is inlaid with semi-precious stones that form stylised flowers and bowers. Next, head east and pass the Kos Minar medieval milestones, which point the way to the abandoned city of Fatehpur Sikri (approximately two hours). Deserted after only a few years because there wasn’t enough water, the incredibly well preserved 16th century royal complex is a haven of courtyards, pavilions, ornamental gardens, the striking Jama Masjid mosque, and home to the intricately carved Rumi Sultana palace. Continue on to Sawai Madhopur and Ranthambhore National Park (approximately two hours) – the 'Jungle Book' brought to life!

Ranthambhore National Park is one of the premier national parks of India – a place teeming with wildlife where nature has reclaimed ancient fortresses and temples. You’ll make a couple of game drives during your stay here, with hopes of getting a sighting of the majestic Bengal tigers that survive among the ruins, stalking through the jungle. Game drives take place early in the morning and in late afternoon, as this is when animals are most active. Even if the tigers are being too stealthy, the park is filled with other animals like gazelle, hyenas, sloth bears, crocodiles, jackals, three types of antelope (nilgai, sambar and chital) and leopards to watch out for. Notes: During the hot summer months, Ranthambhore National Park is closed between 1 July and 30 September each year. Therefore, during this time, we alter our itinerary and take the opportunity to visit the nearby Swai Mansingh Sanctuary instead. A wide variety of interesting wildlife resides here, including hyena, sloth bear, wild boar, panther and cheetah. While there is the rare chance to spot a tiger, this should not be expected. An exciting wildlife walk and a game drive will be included here.

Enjoy a leisurely start to the day before heading northwest to Jaipur, the capital of Rajasthan (approximately 2 hours). Surrounded by a wall dripping in an earthy red colour in the style of the Mughal sandstone cities. Walk through the Pink City’s streets, busy with camels, motorbikes, rickshaws, and past traditionally dressed Rajput men wearing colourful turbans and sporting magnificent moustaches. Jaipur, like Delhi, has both old and new parts, although you will concentrate on the old. Your free time here is perfect for haggling to your heart's content at the many bazaars and backstreets filled with textiles, precious gems, and blue pottery. Cool off afterwards with a lassi from Lassiwala , Jaipur's oldest and most famous lassi shop.

Visit the sprawling City Palace, once home to the Maharaja, an amazing complex filled with fascinating museums and guards whose moustaches are almost as impressive as the building itself. Continue on to the Jantar Mantar observatory and the five-storied Hawa Mahal, or Palace of Winds, with its detailed honeycombed façade filled with concealed windows. Royal maidens once watched the streets below through the fabulous lattice screens, which hid them from prying male eyes. Today snake charmers and fortune-tellers ply their trade below the same hideaway. Climb the twisting roads of the Aravalli Hills and round the final bend to see the massive Amber Fort loom into view (approximately 30 minutes). The opulent palace is packed with elaborate rooms of lavish murals, frescoed arches and delicate jali work. Don’t miss the sparkling Mirror Palace, covered floor-to-ceiling in thousands of reflective tiles.

After the last few days of activity, today is a travel day. Say 'goodbye' to the North and jump on a plane to the more relaxing South. Your destination is Kochi, a once important spice-trading centre that’s split between the mainland and a group of islands just off the coast. Cochin, as it is more commonly known, is a fascinating melting pot of Portuguese, Dutch, Chinese and British influences. Here see spice markets, Chinese fishing nets, a Portuguese palace, the first European church in India, and 17th century Dutch homes. In your free time you can wander down to the beach at sunset, or maybe seek out the best coconut curry in town.

Take in some of the city’s most interesting sights today on an orientation tour. Hop on a local ferry to Mattancherry and drop by the 16th Century Dutch Palace. It was actually built by the Portuguese, but the Dutch took it over, improved on it, and then presented it to the Rajas of Cochin. Later, amble around the spice bazaars and antique stores of Fort Cochin. This evening you’ll experience a Kathakali performance. This Keralan dance is an ornately costumed display of storytelling, a vibrant and extraordinary form of theatre that requires complete control of the body.

From the swaying palm trees, lush rice paddies and winding waterways of the Kerala area, head inland to the thick jungle and spice plantations of Thekkady (approximately four hours). Take some free time to relax and settle into the hotel before exploring the local area. This region is well known for its spice growing, so in the evening prepare for a fragrant tour of a spice plantation and discover local ginger, cardamom, vanilla, pepper, cinnamon, clove and more.

Venture into the acclaimed Periyar Wildlife Sanctuary for a guided nature walk, with hopes to encounter the park’s rich variety of wildlife. Encounters with animals in the wild are never guaranteed, and this is more of a jungle walk than an animal spotting tour, but look out for tiger tracks, spotted deer, Indian elephants or gaur – the world's largest species of buffalo. For something extra, opt for a boat tour on the lake, or maybe attend an exciting demonstration of Indian martial arts (kalaripayattu) at the Kadathanadan Kalari Centre. Notes: The nature walk has a minimum age requirement of 12. For those with children under 12, an alternative activity will be arranged. Normally a traditional tribal dance.

Swap jungles for backwaters, leaving Periyar and heading back west to discover sleepy Alappuzha (approximately three hours). Once a significant trading port, the town is now famed for the long ‘snake boat’ races that take place in August every year. Here board a typical Keralan houseboat to cruise through the complex system of beautiful lagoons and canals known as the ‘Malabar Backwaters’. These floating cottages have western toilets, private bedrooms, a dining area and sundeck to relax on. The backwaters are best explored by boat as life revolves around the water here – children often learn to swim before they can walk and they row boats before they ride a bike. These waterways are the principal means of communication and trade for scores of homes and villages. Along the banks, at jetties and ferry stops, there's often a wonderful array of produce ready for market, with sacks of cashews piled high next to coconuts. You can learn about the unique culture of local Keralan life with a village tour.

Travel down the west coast of the continent to end the trip with a relaxing slice of royally sanctioned paradise. Head to Kovalam via Kerala’s capital, Trivandrum (approximately four hours). Move from sun lounger, to beach, to hotel pool, and then back again, perhaps squeezing in a traditional ayurvedic massage. 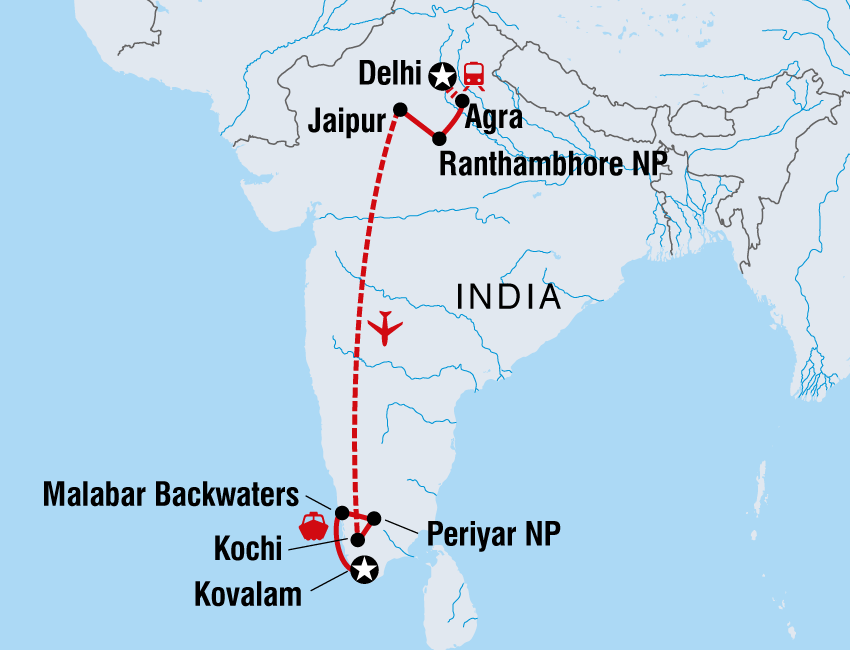