One of the last truly wild places on earth, Borneo offers rare treats for the nature lover – see orangutans at a sanctuary and quirky proboscis monkeys in Bako National Park.. Discover the colourful history of a variety of different ethnic groups and spend the night in a homestay with a local family.. Explore labyrinthian caves and watch as millions of bats emerge from their depths at sunset, darkening the sky like a plume of black smoke, in Mulu National Park.. Follow in the infamous footsteps of tribal warriors on a trek through wild, dense jungle on the Headhunters’ Trail – rich with wildlife like hornbills and monkeys.

Wild, tropical and remote – think of Borneo as South East Asia’s answer to the Amazon. This 10-day tour is full of active adventure set in natural paradise. See orangutans swinging through the rainforest treetops at a sanctuary in Semenggoh, weave through the vast Mulu cave systems and spend a night in an Iban homestay. Follow the Headhunters’ Trail through dense jungle in Sarawak, wander along Kuching’s riverside promenade and relax on golden-sand beaches on Labuan Island. 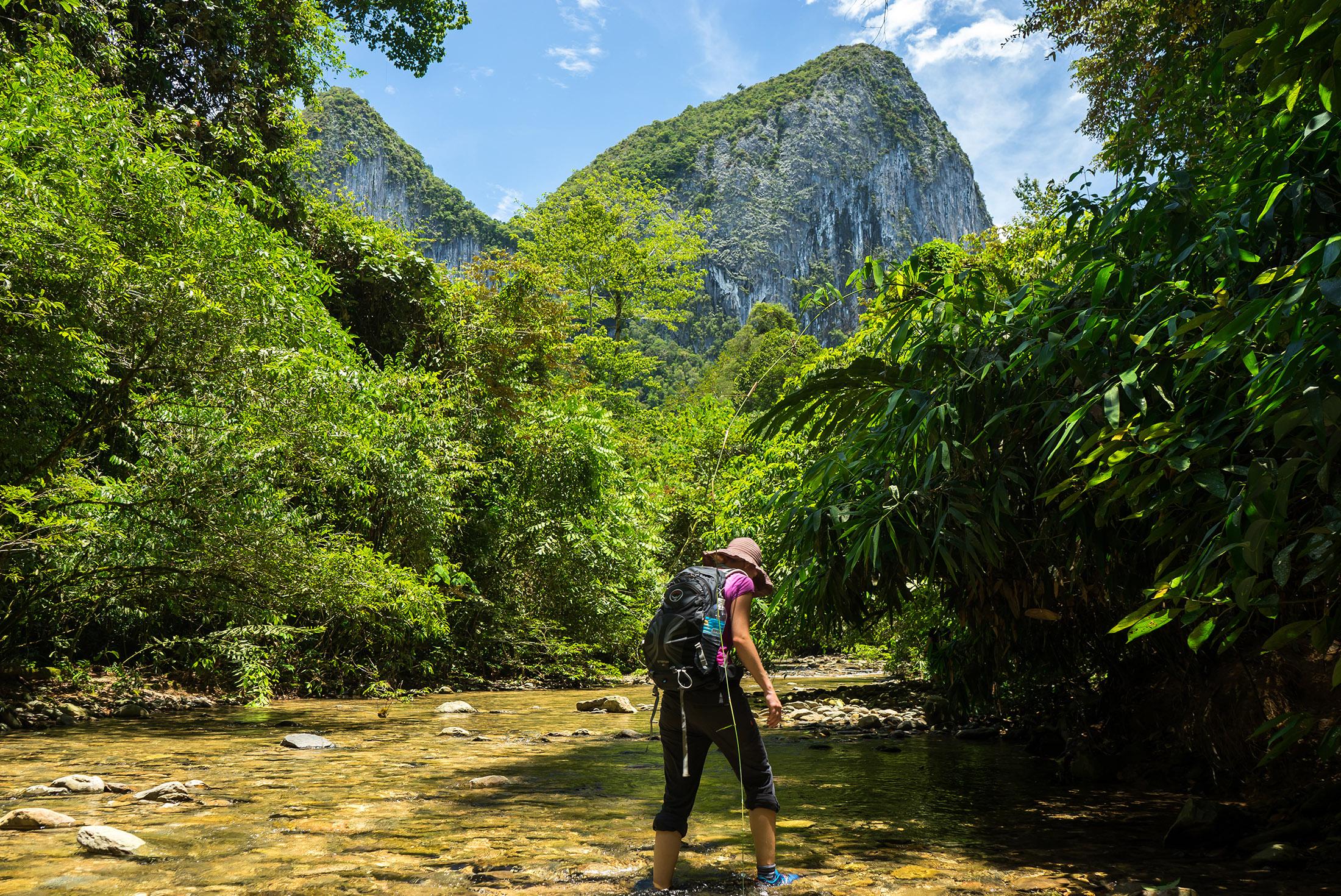 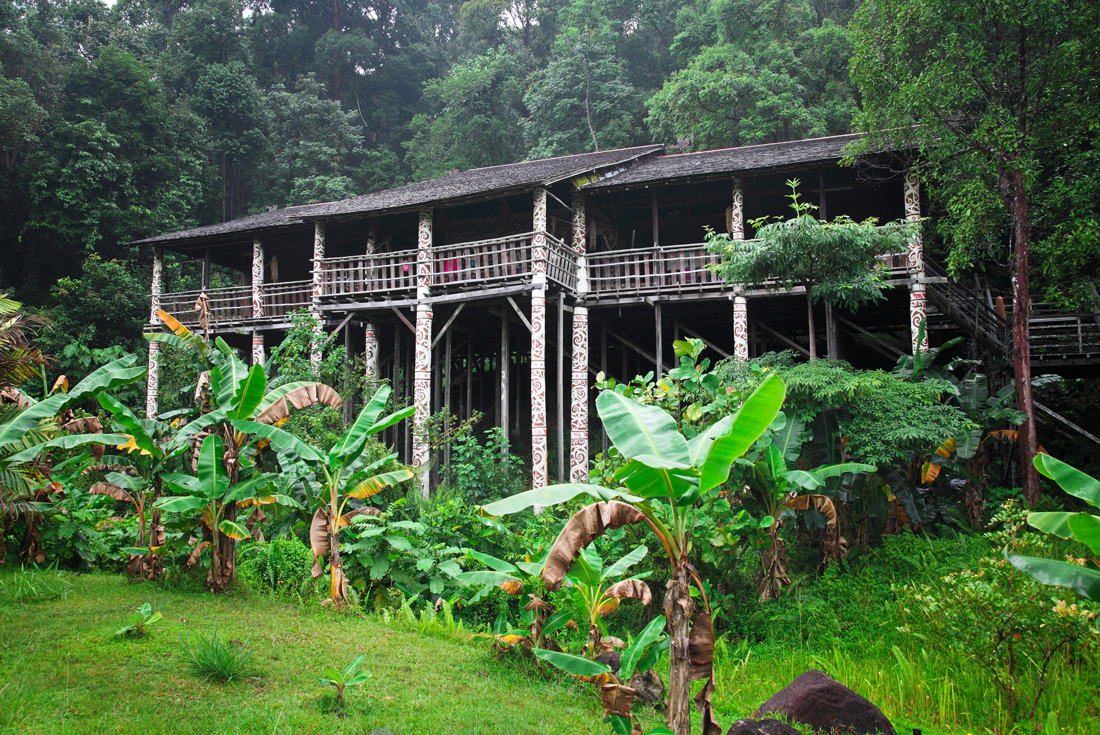 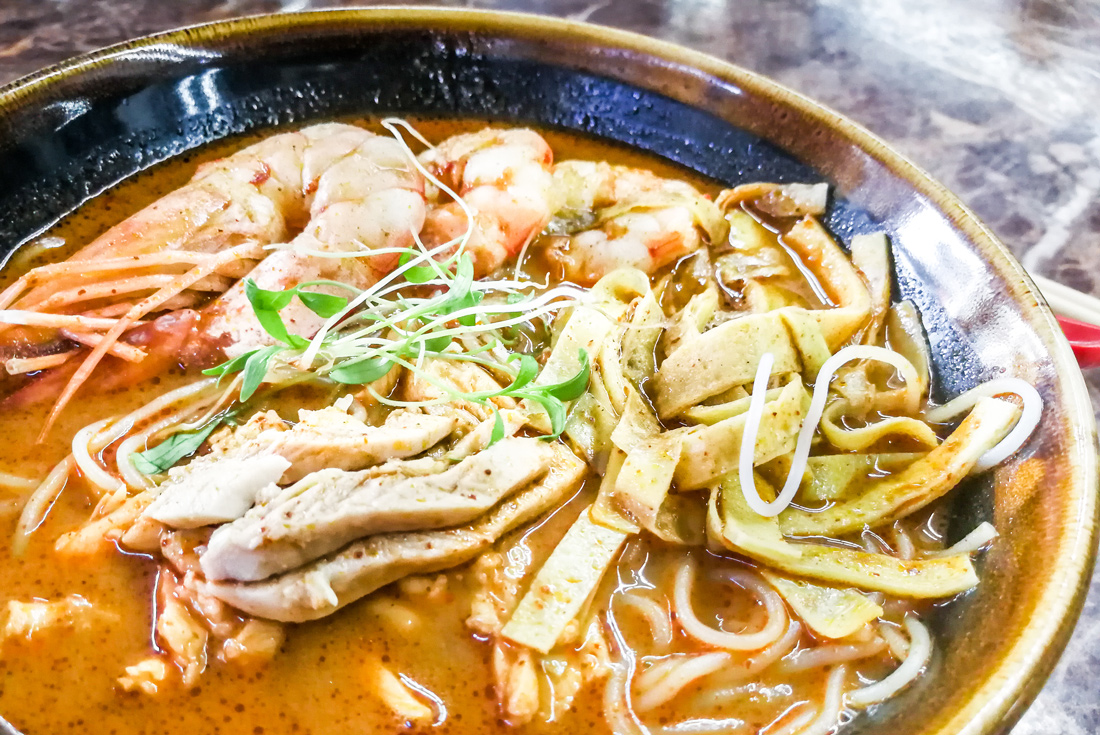 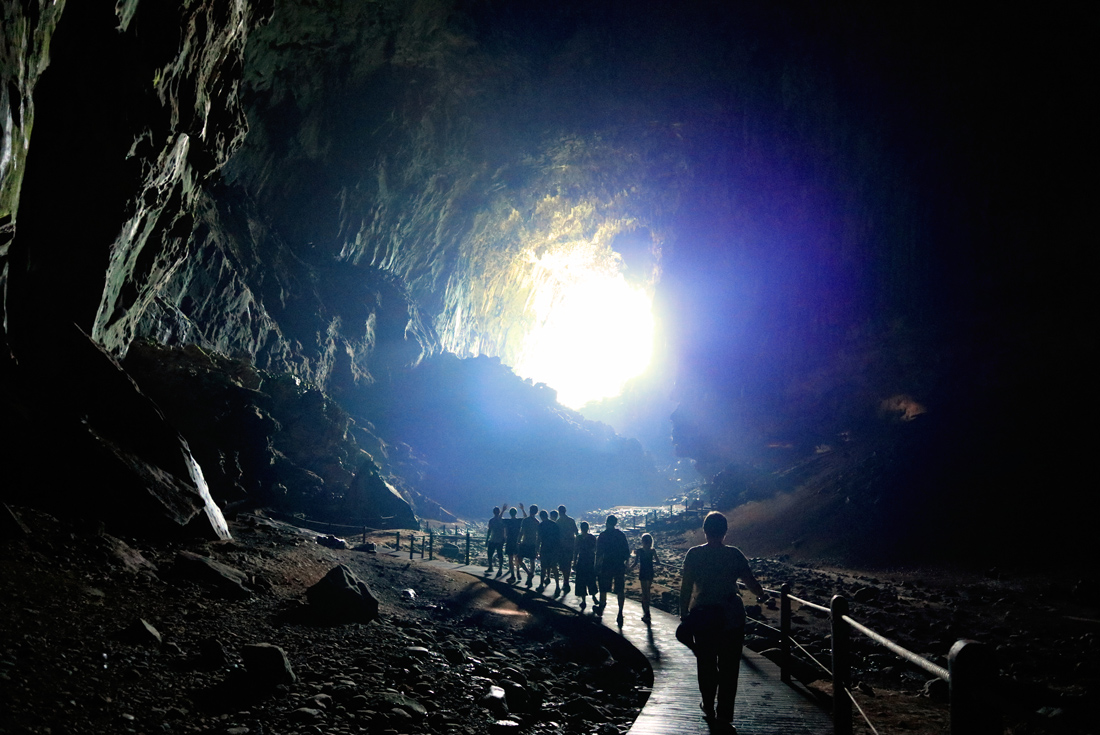 Selamat datang! Welcome to Malaysia. Kuching, meaning 'cat' in Malay, is arguably the most pleasant city in Malaysian Borneo. It was home to the infamous White Raja of Sarawak, whose mysterious rule in this remote corner of the world sparked the imagination of many people who dreamt of becoming royalty. Your adventure begins with a welcome meeting at 6 pm, which you can find details about at the hotel’s reception. In any free time before the meeting, check out this cosmopolitan city rich in architecture, where the waterfront houses a wealth of curious shops and local vegetable, spice and fish markets. This city of skyscrapers sitting near lush green jungle is easily walked around, so maybe relish the mellow vibe and head out with your new travel companions to try some local dishes like Sarawak Laksa and Kolok mee.

Hop in a private van to the fishing village of Kampung Bako (approximately 1 hour), then a local boat up the coast to Bako National Park (approximately 20 minutes). Bako is the oldest national park in Sarawak and features rainforest, abundant wildlife, jungle streams, waterfalls, interesting plant life, secluded beaches and trekking trails. Millions of years of erosion formed a coastline of steep cliffs, rocky headlands and stretches of white, sandy bays. Waves have carved the cliffs into fantastically shaped sea arches and sea-stacks, with coloured patterns formed by iron deposits. Weather permitting, you’ll take a leader-led walk to the beautiful beach at Teluk Pandan Kecil (5 kilometres, approximately 3 hours ). The trail climbs through the forest before emerging onto an open plateau covered in scrub, from where curious pitcher plants can sometimes be seen. It can be a hot, but always rewarding hike. For those looking for a longer (or shorter) hike, you are free to explore as many of the 18 different trails as you like. Whatever your plan, check with the ranger for the best time to spy the quirky proboscis monkeys up in the trees. Return to Kuching in the late afternoon and spend the evening in a hotel.

Head to the Semenggoh Orangutan Sanctuary – a government-funded rehabilitation centre set in lush surrounds. The centre was set up to help reintroduce these wonderful creatures back into the wild after a life of domestication or having been orphaned. Head into the jungle via a walkway, where from a viewing platform you can watch and photograph the orangutans as they swing into view and eat the supplementary diet of bananas and milk that is laid out for them twice a day. Take some time to savour the special moments in these animals’ company. Human contact must be kept to a minimum and it's essential that you follow your leader's instructions. Afterwards, return to Kuching and the hotel, where you can freshen up from the heat. This evening perhaps mosey down to the riverbank and watch tambang ferries glide by, or head out to one of the many Chinese-influenced hawker markets for dinner and experience the range of local seafood.

Fly to Mulu, sending your large bag on to Limbang and packing a day bag with the essentials for the next four days. When you arrive in Mulu, head into the heart of one of the most spectacular national parks in Asia – Gunung Mulu National Park. Transfer the short distance to Mulu HQ (2 kilometres) where you’ll stay for the next 2 nights. Your leader will go through some of the options for your free time here. You can take to the some of the self-guided trails around the park, or to the treetops on the world’s longest tree based canopy walkway. Or maybe simply kick back with a book and enjoy the sounds of the nearby jungle. Later there is the chance of an optional night walk to search for some weird and wonderful insects and reptiles. Tonight you’ll stay in the park headquarters, which has its own restaurant and Information Centre. Accommodation is multishare rooms with private bathroom.

Today you have a free morning to explore or have a sleep in. Spend the afternoon strolling the walkways of this 180-million-year-old rainforest, and then catch the sunset flight of the bats at Deer Cave. The World Heritage-listed park has absolutely spectacular limestone geology, with enormous caves, vast cave networks, rock pinnacles, cliffs and gorges. In fact, its system of caves is the largest known in the world, formed when surface water worked its way through the rock, carving gigantic passages through the bedrock. Deer Cave has one of the single largest cave passages in the world, 2.2 kilometres long and 220 metres tall at its highest point. Before it was part of the park the cave was a well-known hunting ground for deer, who were attracted to the pools of salty water running off the heaps of guano. The guano comes from the millions of bats who call the cave home, and at dusk there’s a mass exodus as they emerge for their nightly feeding, like a seemingly endless black plume of smoke twisting across the sky. In nearby Lang cave you can appreciate the work that the water does on the limestone, sculpting waves on the ceiling, drawing stalagmites, columns and stalactites.

Leave Park HQ behind and head into the jungle. Take boats for around 30 minutes downriver to the amazing Clearwater and Wind caves, which contain Asia’s longest underwater river. The Clearwater cave system runs for 107 kilometres, 75 of which have been explored. The system gets its name from the bright jungle pool at the base of the steps that lead up to the cave mouth. Wind Cave draws a cooling breeze through its lengths and features some of Gunung Mulu’s best cave formations, while Clearwater is covered in a species of bright green plant that is unique to the park and offers a real opportunity to see the water at work on the rock. Afterwards, take a longboat downriver before disembarking to hike through undisturbed jungle to Camp 5, nestled at the end of Melinau Gorge (approximately 8.5 kilometres). During dry season, the boats may need to be pushed over certain sections of the river, so it is advisable to wear strap on sandals or shoes that can get wet. At Camp 5 you will sleep in these wonderful surrounds, on mats on raised open-air platforms in a mixed gender dormitory, with shared bathroom facilities and cold water showers. Bedding is not provided so bring your own sleeping sheet and a warm layer for cool nights. Mosquito nets are available to rent for a small charge. Please be aware that at certain times of the year there can be many bees around Camp 5.

Today you’ll tackle the infamous Headhunters' Trail. Located in an isolated area of the Bornean jungle, this 11.3-kilometre (approximately 5-hour) trail takes its name from its historical role as the route taken by warring parties between the Tutoh and Limbang rivers. The trek is through dense jungle along a well-defined, mainly flat track, although the way can be muddy during the rainy season. You'll also have to cross some streams by rope bridges, wooden walkways, logs or by getting your feet wet as you wade through. You’ll be surrounded by stunningly diverse flora, massive bird-filled trees, and the magical sounds of the forest – a hornbill flapping its wings, the cries of monkeys, and the pulse of cicadas and crickets. Then you’ll take a boat from Kuala Terikan to Kuala Mendalam, a journey of around 4 hours. Depending on how much rainfall there’s been, you may be required to help push the boat over shallow parts of the river and there will be a stop at a ranger station for lunch along the way. It’s a long, challenging and rewarding day. Spend the evening at a guesthouse, a short walk from the river, where you’ll reunite with your luggage. Freshen up on arrival and enjoy dinner with the host family.

Farewell your hosts and depart the longhouse to travel by private vehicle to Limbang (approx. one hour). From here, catch a ferry to Labuan Island (approx. 2-2.5 hours) where you’ll have a free afternoon and evening at a beach resort. Relax and recover after yesterday’s trek, chilling out with a cold drink and a good book. Maybe head to Layang Layang Beach for a swim and the sunset.

Labuan was occupied by Japanese forces during WWII and this morning you’ll have time to visit the Labuan War Memorial, where British, Australian, New Zealand, Indian, Malay and local soldiers are buried. This morning you’ll take a historical tour of Labuan. Learn about the coal mining days with a visit to the Coal Museum and Chimney. Then drive along the west coast to Peace Park, built in memory of all who died during the War. Next you’ll head to Surrender Point, where the Japanese surrendered to the Allied Forces on 10th September 1945. Continue the journey to the War Memorial and History Square. Head to Labuan Museum to learn more about the history of the Island. Then catch the afternoon ferry to Kota Kinabalu (approx. 2.5 to 3 hours), the capital of Sabah and a modern metropolis that rebounded from multiple bombings during WWII. Kota Kinabalu has interesting museums to explore (the Sabah State Museum is a great place to immerse yourself in its backstory), markets to browse, and the surrounding beaches and islands are perfect for swimming or snorkelling. Tonight, perhaps head out for a final meal with your group to celebrate your Borneo adventure – the night market is filled with fresh grilled seafood.

Aside from breakfast, there are no activities planned for the final day and you are able to depart the accommodation at any time. 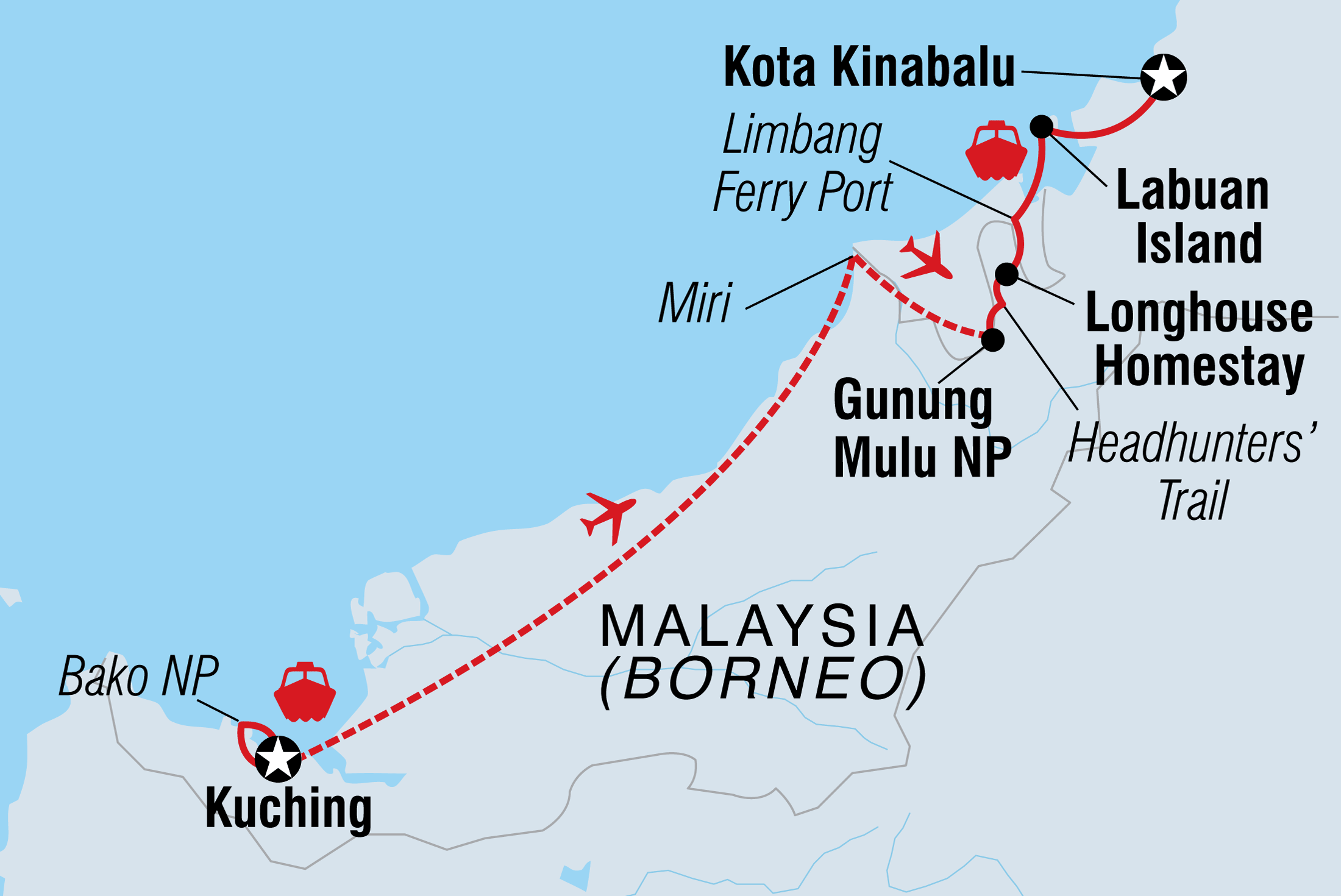