Encounter the legacy of Russian tsar Peter the Great while exploring the enigmatic streets that showcase the many palaces and museums of St Petersburg.. Join a local family in St. Petersburg and have some tasty home cooked meal while learning some Russia games!. Visit the Solovetsky Islands, location of one of the first GULAGs. Travel to Murmansk, the biggest city within the Arctic Circle, and venture through tundra to the deserted town of Teriberka by the Barents Sea.

It’s the multi-faceted culture Russia has to offer that makes it so appealing. Places like St. Petersburg or the cities of the Golden Ring boast so much in art and culture that it would take near decades to even loosely acquaint yourself with what they have to offer, yet the frosty reaches to the north tell different tales of old castles, derelict towns, prison camps and time-lost labyrinths. This trip takes you across a land shrouded in both magnificence and secrets as you explore the bustling architectural glory of St Petersburg, Yaroslavl and Moscow and right up to the Arctic treasures of Murmansk and the Solovetsky Islands. 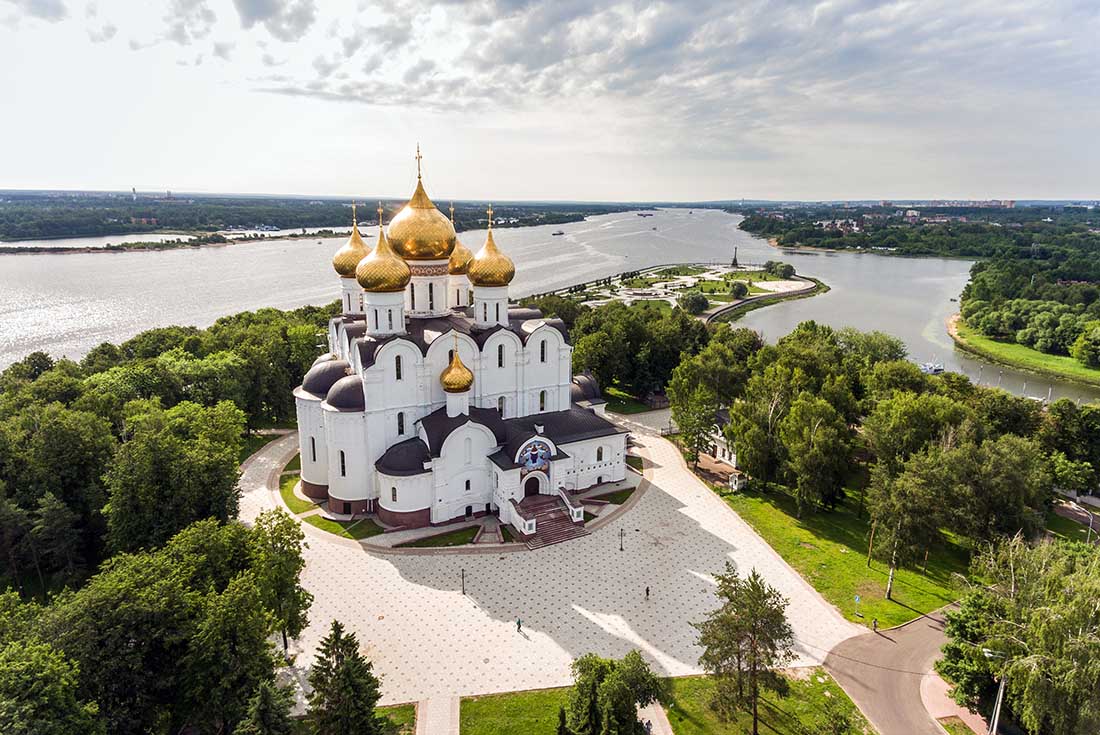 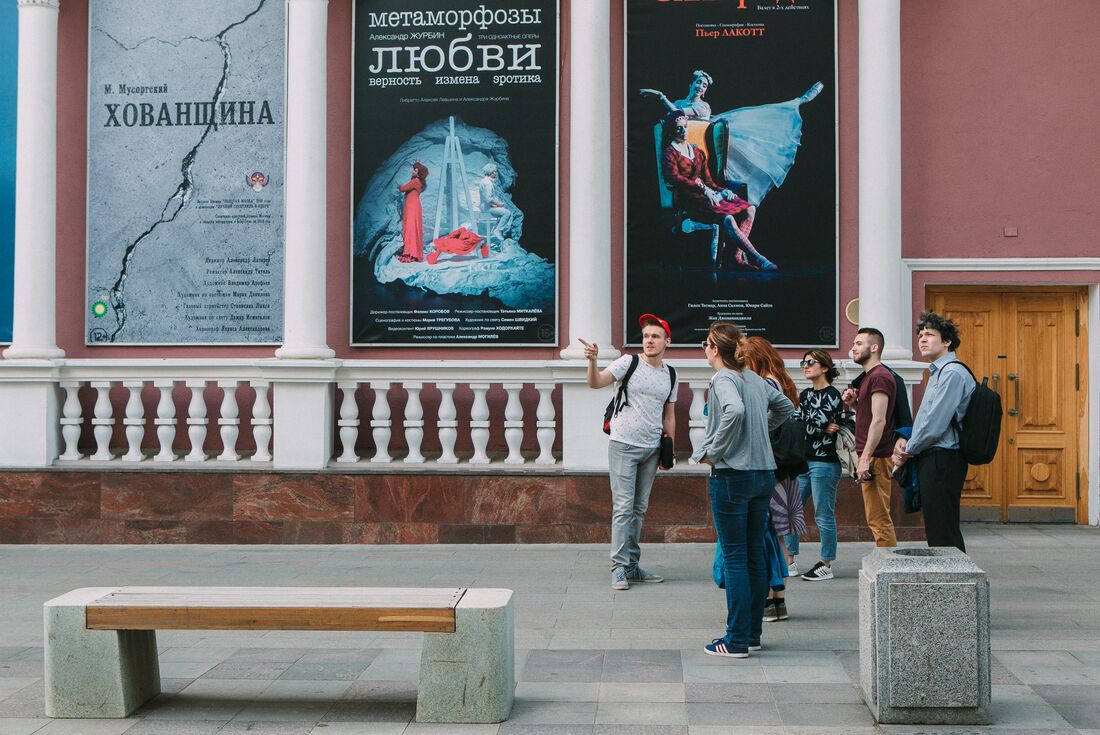 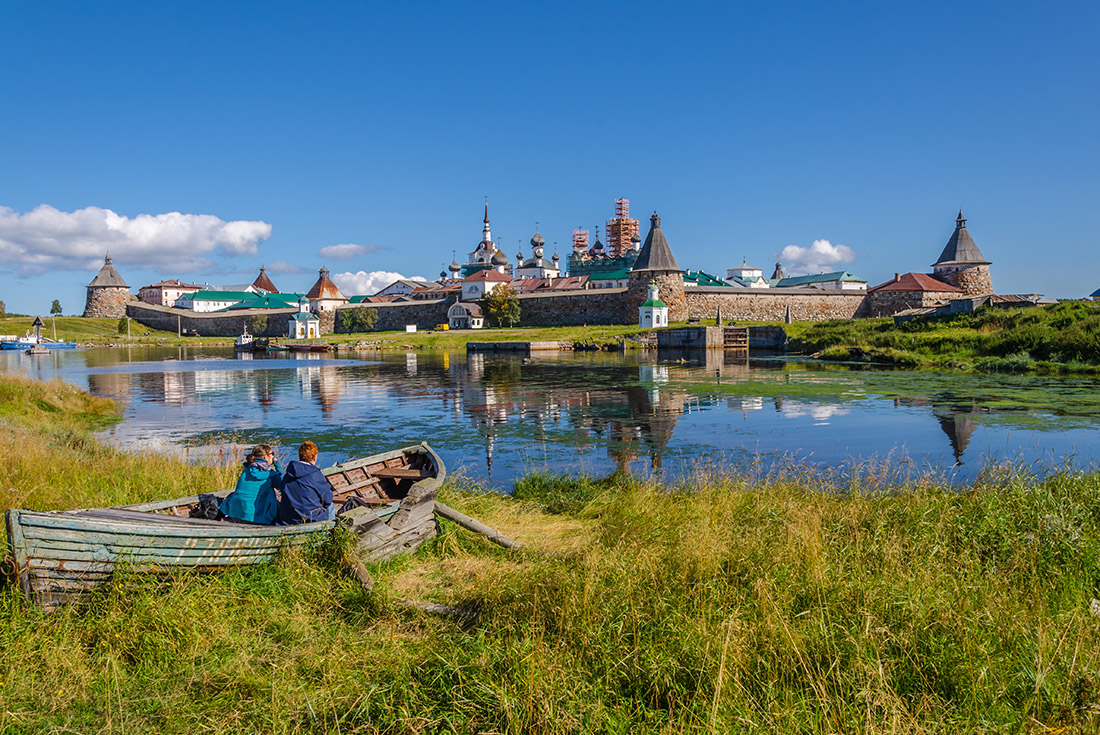 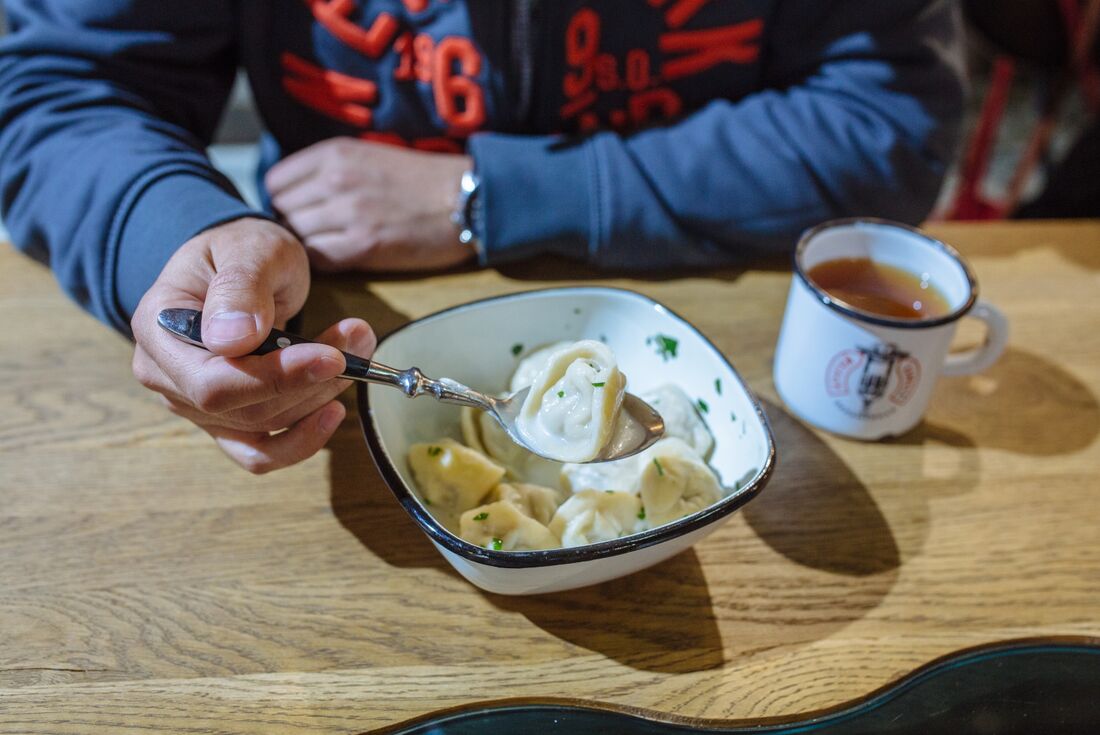 Zdrastvutye! Welcome to St. Petersburg, Russia’s second largest city. This adventure begins with a welcome meeting at 6:00pm. Please make sure your bring your passport and insurance details with you to the meeting. Please have two copies of your passport, visa and migration cards ready. One will be collected by your leader, the other is for you to keep on you at all times whilst on this trip. St. Petersburg, the ‘City of the Tsars’, is full of architectural monuments – if you’ve arrived early, it’s well worth tracking down some of the impressive structures throughout the city. The Palace Square, Kazan Cathedral, Peter and Paul Fortress, Saint Isaac’s Square and many more of these historic centres capture the city’s imperialist charm, showing touches of European influence in the architecture of these old buildings.

Spend a day exploring St. Petersburg with a city tour through the former center of the Russian empire, learning about Nevsky Prospekt, the Neva River embankment and more historical parts of the city. Then enjoy some free time in the city. Perhaps take the hydrofoil boat to Peter the Great's summer palace - Peterhof and see the golden fountains glistening under the northern sun or maybe go up to the Colonnade on the top of St. Isaac Cathedral for a panoramic view of this magnificent city. Maybe head to the Mariinsky or Mikhailovsky Theatre to witness some world class performances (advance bookings essential).

Discover one of Russia’s most spectacular sights – the stunning Hermitage museum. Founded by Catherine the Great in 1764, the Hermitage is one of the largest and oldest museums in existence. The museum itself boasts over 2.7 million exhibits, displaying a diverse range of art and artefacts from across the world and throughout history (from Ancient Egypt to the early 20th-century Europe). Experts have calculated if you watch each item for one minute and spend 8 hours in the Hermitage daily, it will still take you almost 15 years to view everything that the museum has to offer.

This morning, before we say goodbye to St. Petersburg, discover authentic Russian culture from visiting the oldest market through to a modern residential neighbourhood — where you’ll be welcomed into a local’s home for lunch! Dig into a traditional home cooked meal then play some typical Russian games with your hosts. This surely is the best (and tastiest!) way to uncover the real St. Petersburg. In the evening, board our first train from Ladozhskiy Vokzal and travel overnight (approx. 15 hours) towards the Russia's north and the gateway to the Solovki Islands.

We disembark in Kem mid morning and transfer to the ferry for our journey on the White Sea to the Solovetsky Islands, also known as "Solovki" (approximately 2 hours). These remote islands have a turbulent and varied past. Historically, the islands housed a famous Russian Orthodox Monastery from the 15th century onwards, serving as the site of many repelled attacks attacks across the ages. The communist era saw it the islands become a place of exile and home to one of the earliest GULAGs (prison camps) from the early 1920s. Despite this dark past, the natural beauty of the islands is breathtaking, especially during the "White Nights" of midsummer when the sun never fully sets and you are treated to long hours of sunset merging into daybreak without true night inbetween. We stay in a comfortable hotel on the main island, Bolshoy Solovetsky, and expore some of the main sights on a walking tour with a local guide today, including the now re-established Transfiguration Monastery - a UNESCO World Heritage site.  In free time here you may choose to hire a bike and explore some of the trails around the island or visit the Botanical Gardens (from where there are some excellent views).

Take a boat trip to the nearby Bolshoy Zayatsky Island today a place shrouded in myth and mystery. Explore the well preserved mossy stone labyrinths built 2,500 years ago and reflect on the fact that these remain, but yet there is no trace of the fact that the island was used for female solitary confinement during the GULAG era. The origins of these labyrinths are uncertain, let alone their uses but it’s been suggested that they symbolise the border between this world and the underworld, assisting the souls of the dead to travel to the afterlife. Others also speculate there were built as complex fishing traps! The climate here is fairly severe resulting in little vegetation other than moss and low growing shrubs. Dress warm both for the boat here and back and for the windswept terrain. Spend another in our hotel on Solovki tonight.

Return to Kem again by ferry and transfer back to the train station. Our next overnight train journey takes us to the world's largest Arctic city - Murmansk (approximately 12 hours).

Arrive in Murmansk this morning. This bustling, modern metropolis boasts plenty of Soviet-era architecture set to the backdrop of stunning Arctic scenery. Murmansk is often referred to as a 'hero city’, and today’s guided walking trip will highlight its role in the Great Patriotic War (World War II). Begin with a visit to the Alyosha monument, dedicated to the Soviet soldiers, sailors and airmen who fought so valiantly to defend their country. Continue to the angular Lighthouse monument, housing a memorial hall dedicated to sailors lost at sea. Lastly, ascend to a lookout point with sweeping views over the city. You'll be able to check into the hotel after the city tour and in the afternoon, the city is yours to explore. Maybe check out the Naval Museum of the Northern Fleet, where you'll get an in-depth look into Russian Navy history.

Take a day trip to Teriberka, an Arctic fishing town situated on the northern coast by the Barents Sea. Travel along rough roads on a 2.5 hour drive through tundra before arriving at the town. While the adventure may be bumpy and long, the experience of seeing this half abandoned town offers a real life historical view of the rise and fall of provincial life in this isolated, challenging part of the world. For any movie buffs on the trip - Andrey Zvyagintsev’s Golden Globe winning film Leviathan was shot here in 2014. Stop in at the local ship "graveyard", where old wooden boats can still be seen sitting in clear view of the houses across the river. Take a short scenic hike (approx. 1 hour return) to a local waterfall that flow directly into the Barents Sea and for those who are daring, maybe dip your toes in this most northern waters in Russia! Lunch is included during our visit here. Return to Murmask for the evening.

Embark on a lengthy day of travel today to take us back to the "mainland". First a 2.5 hour flight from Murmansk to Moscow and then private transport to Yaroslavl, one of Russia's famed "Golden Ring" of former ancient capitals. Yaroslavl is situated on the banks of the Volga river and is the largest city of the Golden Ring. It boasts some impressive buildings in the country, retaining many beautiful old structures that date back to the 17th, 18th and 19th centuries. As a result, much of Yaroslavl has officially made it onto the UNESCO World Heritage list. Settle into our riverside accommodation in preparation for a full day of exploration tomorrow.

Yaroslavl is a goldmine of architectural wonders and the best way to experience them is on a guided walking tour. Sitting at the confluence of the Kotorosl and Volga Rivers lies the Spassky Monastery, a 12th-century marvel with brilliant green rooftops. For a small extra cost, the bell tower can be climbed for a marvellous panoramic view of the city below. Afterwards, see the Church of St. Elijah the Prophet, regarded as one of the best-preserved monuments of Yaroslavl. Finish up the walk by wandering along the riverbank, taking in views of the city and the surrounding landscape. The rest of the day is free to explore on your own. There is the intriguing little Museum of Music & Time, options for Volga River boat trips, and all manner of cafes, restaurants and bars to relax in.

Depart from Yaroslavl this morning and travel to Moscow today. Arrive midday in Moscow, a great city that has survived centuries of revolution and seen Russia through some of its most turbulent years, from tsardom to communism, to today's contemporary society. Central Moscow may be modern in parts, but its fascinating, historic heart hosts a wealth of sights to see. Check into our centrally located Moscow hotel and rest up for another intense day of sightseeing tomorrow. 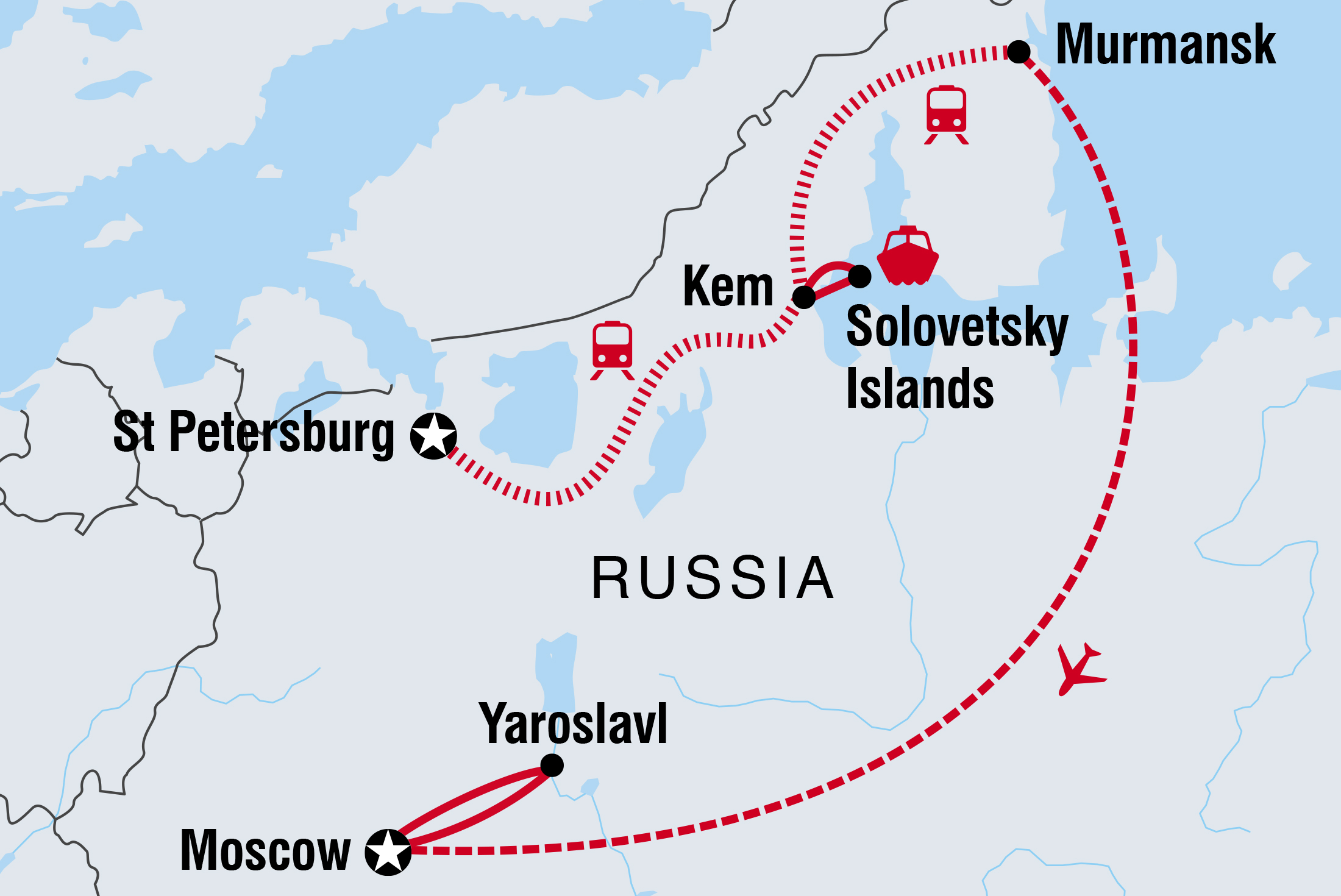