There’s a lot more to Iceland than ice (and Bjork). Ford the fjords, glaciers, volcanoes and black sand beaches, and consider adding on a visit to the renowned Blue Lagoon for a soak in the geothermal springs.. Spend the evening at the quirky farm town of Modrudalur – an isolated settlement and the highest inhabited place in Iceland.. Walk to the mottled blue, grey and black tongue of Vatnajokull glacier – an ice cap so large it covers eight per cent of the country – and discover the incredible Skogafoss Waterfall.. Glide past blue-white icebergs on an included boat tour of Jokulsarlon glacier lagoon and soak up the silence of the surrounding grey sand desert.

Travel to Iceland and delve into the ancient tales of Vikings and volcanoes on this eight-day adventure to its heartlands. Marvel at geothermal hot springs, witness the steamy eruptions of a giant geyser, touch the tongue of Europe’s biggest glacier at Vatnajokull and cruise the Jokulsarlong Glacial Lagoon, see lava that’s still warm after decades and witness the giant Skogafoss and Detifoss waterfalls in all their splendour. Travel through Iceland’s isolated corners and the land of the famous Blue Lagoon – so mysterious and ethereal that they have inspired artists, poets and musicians for centuries. Plus, with a local leader on hand to answer any questions and get you from place to place, you’ll be cruising around this icy isle in no time. 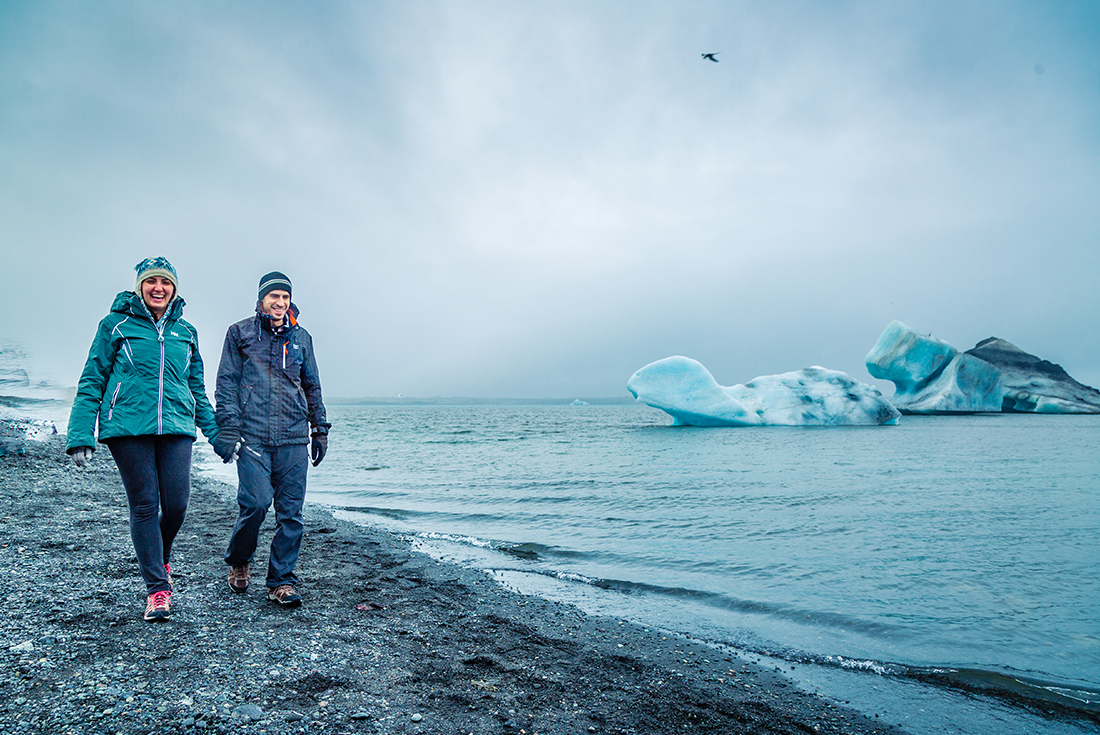 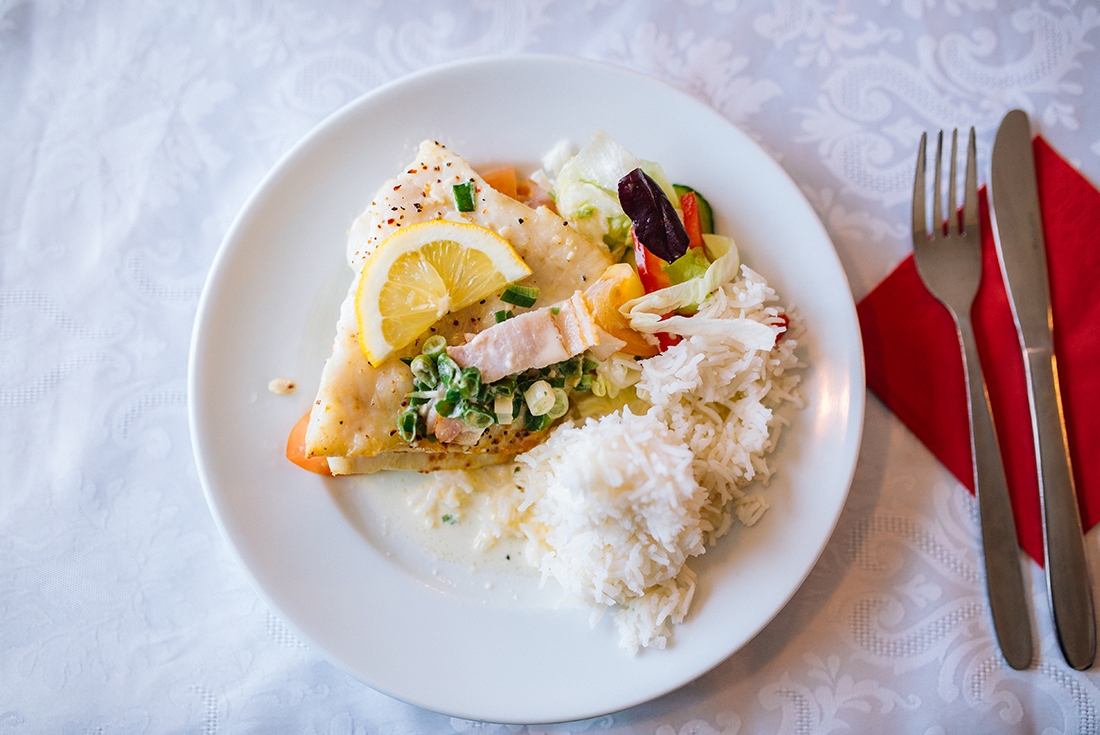 Hallo! Welcome to Reykjavik, which lies just below the Arctic Circle. The city sees around four hours of sunlight a day in winter and 22 hours or more in summer. Surrounded by volcanic peaks and crystalline ocean and boasting a vibrant arts and nightlife scene, Reykjavik's contrasts are utterly beguiling. Your adventure kicks off with a welcome meeting at 6 pm at your accommodation. If you arrive early, why not head to the National Museum, which depicts the history of Iceland from the ninth century – when the first Vikings from mainland Scandinavia arrived and settled – to the present day. Or perhaps join locals who gossip and chatter in the Laugardalslaug Geothermal Pool.

Make an early start to beat the crowds on the Golden Circle route. Head to Thingvellir National Park, home to the Parliament Plains and location of Iceland’s first parliament. Thingvellir also contains the Silfra fissure, where the North American and Eurasian tectonic plates are slowly pulling apart. The resulting gap is partly filled with fresh water and is clearly visible. From here head to the Geysir geothermal area, checking out Strokkur and watching as the geyser swells with blue water before erupting and shooting some 20-30 metres in the air. Be spellbound by the immense beauty and sheer power of the Gullfoss (Golden) double waterfall on the Hvita River, before proceeding to a remote farm in the Hvolsvollur region, our overnight stop for the night. The guesthouse is the leader in responsible tourism and sustainability in Iceland. Since the arrival of the first settlers to Iceland, deforestation has taken place in order to make space for pastures. Overgrazing has then led to soil erosion. With this in mind, the owners had the idea to start a tree planting project on their land to contribute to lowering CO2 and counteract soil erosion. Join the effort to counteract this and head out into the hills surrounding the property to plant trees. Upon return head into the kitchen and help your leader prepare a self-catering dinner.

Begin the day with a visit to breathtaking Seljalandsfoss waterfall, followed by Skogafoss waterfall. At 25-metres wide with a 60-metre drop, this waterfall roars. You can feel its power up close with a strenuous walk up a windy set of stairs up to a stunning viewpoint. The black sands and bizarre, rectangular rock formations of Reynisfjara are up next. The last stop of the day is the famous Jokulsarlon Glacier Lagoon. Make sure you head down to Diamond Beach, where some of the icebergs are washed onto the black sand. You'll also have the option to walk on the mottled blue, grey and black face of one of the tongues of Europe's largest glacier, the epic ice cap of Vatnajokull. From here it is not far to our overnight stay, located on another lagoon that is sheltered by a black sandbar.

Start the day by returning to the Jokulsarlon Glacier Lagoon. Cruise between jagged icebergs in an included boat tour. Then take a scenic drive along the rugged coast of the East Fjords. Enjoy spectacular views of high mountains, deep fjords, spectacular waterfalls, glaciers and quaint fishing villages. Make stops along the way at small but notable towns like Djupivogur, which became a member of the cittaslow movement in 2013 and is aiming to be the Happiest Town in Iceland, and drop by Egilsstadir, home to the mythic Lagarfljot Wyrm. Continue along mountain roads into the highland to the farm village of Modrudalur. At 469 metres (1539 feet) above sea level, Modrudalur is the highest inhabited place in Iceland, and snow can be seen almost year-round. Stretch your legs with a walk to the farm's church, built in 1949 by farmer Jon Adalsteinn Stefansson in memory of his wife. Spend the evening on this unique farm, which is small but rich in history.

Set off for magnificent Dettifoss, Europe's mightiest waterfall at 100-metres wide and with a 45-metre drop into the craggy shores of Jokulsargljufur canyon below. It’s so powerful that it’s vibrations can be felt underfoot. Continue to volcanic Lake Myvatn. Next is Namaskard, where steam rises from the sulphuric terrain and it’s hard to believe you’re on Earth and not Mars. Take a walk around the lava stacks and caves of Dimmuborgir and then observe the massive pseudo craters of Skutustadir. Continue to the crescent shaped Godafoss waterfall, where legend says a lawmaker priest threw the idols of the Norse gods when Christianity became Iceland’s official religion in AD1000. Travel on to Akureyri and settle into your accommodation for the evening.

Situated at the head of Iceland's longest fjord, Akureyri is the nation's second-largest city. Embark on a short walking tour of the town, taking in the striking church and other local sights. If you’re travelling between May and December, you might have the option to partake in a whale watching excursion. Ask your leader for details. Later, continue to Snaefellsnes Peninsula, home to the magnificent Snaefellsjokull Glacier, which played a starring role in Jules Verne's 1864 novel Journey to the Centre of the Earth. Next up is Lysuholslaug, where you can bathe in thermal pools (depending on the season) or check out the Icelandic horses grazing in the fields. Look forward to an included home-cooked dinner this evening. If you are up for it, you can also join in a cooking class with your host and help prepare tonight's meal.

Continue exploring the Snaefellsnes Peninsula, beginning with the white beach at Budir, then go on to Arnarstapi, where a short stroll along the coastal cliffs exposes you to rich bird life and other wonders of nature. Continue on to the basaltic pebble beach Djupalonssandur. In the afternoon head back to Reykjavik to complete your circuit of Iceland. The rest of the evening is yours for the taking. Perhaps head out for dinner with your fellow travellers and toast with a glass of Brennivin, a savoury schnapps.

Today is departure day and time to say sjaumst (see you soon)! Check out time is at midday. If you are departing later, you can arrange with reception to store your luggage at the hotel. If you wish to spend more time in Reykjavik, we'll be happy to book additional accommodation for you (subject to availability). Please speak to your booking agent at the time of booking. Perhaps browse some of the city's great art galleries. If you feel like something more active, book yourself on a Silfra Fissure snorkelling adventure, where you’ll discover this underwater ridge with water visibility of up to 120 metres. Alternatively, while away the hours with a soak in the geothermal waters of the famous Blue Lagoon. Nearby is the currently erupting Fagradalsfjall volcano. See basaltic lava bubbling from the central vent, making its way down the flank of the cone. Make sure you pre-book your full day tour to see this fiery spectacle.