Spend a night in a family-run guesthouse in the countryside near the Great Wall. Participate in a marathon run along the greatest wall in the world. (Full/Half or 10km). Like everything it does, China’s ancient history is on an epic scale – see it when face-to-face with thousands of Terracotta Warriors (or thousands of local tourists at the Forbidden City!). Feel the might of China’s imperial power while exploring Beijing’s Forbidden City, filled with palaces, gardens and seemingly never-ending grand courtyards.

Step your running goals up a notch with this incredible, yet challenging, marathon course along the Great Wall of China (Full, Half or 10km). Warm up in Beijing before heading to the Great Wall for the big run – the only Chinese-supported marathon in the country. This ain’t your average track; runners will navigate rough paths, sloping trails and narrow steps, so you’ll need to be fit and alert. That said, runners have the option to sign up for a full, half and ten-kilometre course, so there’s something for most fitness levels. Recover with a week of travel around Northern China, taking in the Forbidden City, Tian’anmen Square, Xi’an’s famous Terracotta Warriors and stylish Shanghai. On your marks, get set, GO! 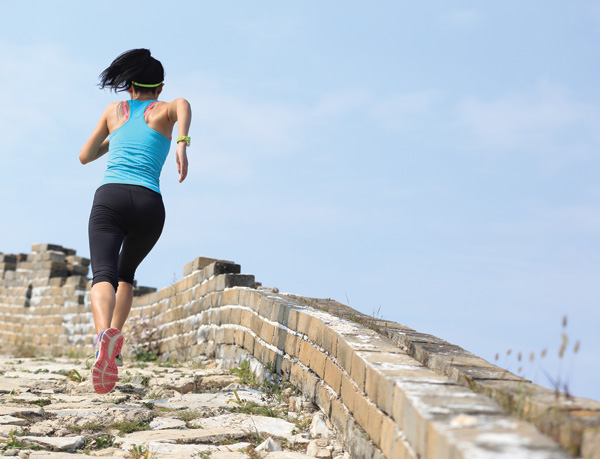 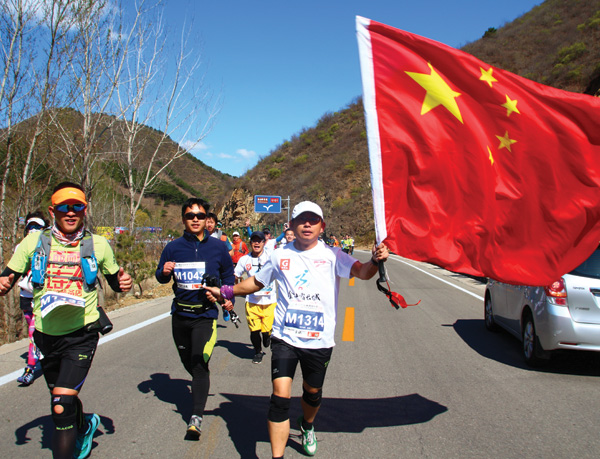 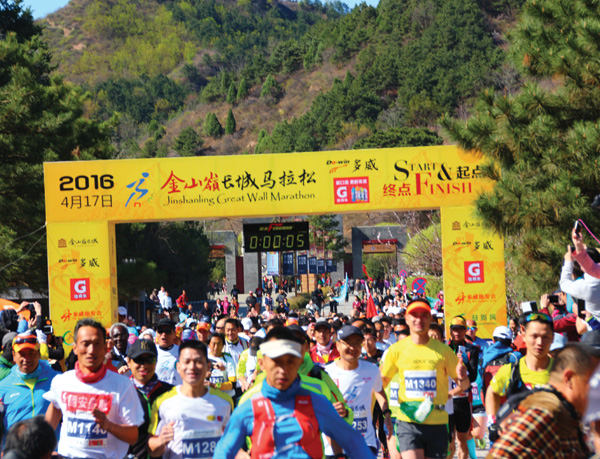 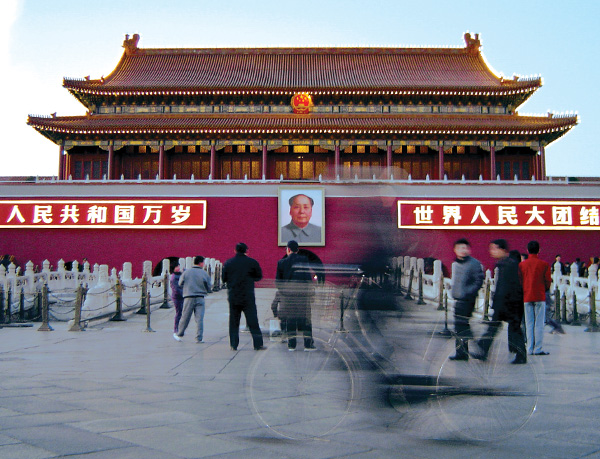 Nimen Hao! Welcome to China. Beijing has quickly shed its historical face in favour of a more modern look. Still, there are plenty of places that offer a great insight into the nation's ancient past, alongside its contemporary culture. If you arrive early, stretch your legs with a walk around the Temple of Heaven, Summer Palace, Panjiayuan Market, Houhai Lake, Nanluoguxiang Street or the night food market – anyone up for protein-rich scorpion on a stick or fried cicadas (perfect snacks for your upcoming marathon!)? Your expedition begins with a Welcome Meeting at 6 pm this evening. Look for a note in the hotel lobby or ask reception where it will take place. Afterwards, settle into your hotel and get a feel for this vibrant city.

This morning we will explore the hutong areas in Beijing on a walking tour with our leader. These narrow winding streets in the heart of the city form the Chinese capital's ancient heart and while they are rapidly disappearing, still offer a great insight into traditional life. Then travel by private transport from Beijing to a village near the Gubeikou section of the Great Wall. Spend the night in a family-run guesthouse, where you’ll experience local hospitality and some time in the fresh country air. Sample some delicious regional produce with a home-cooked dinner at the guesthouse (not included), before heading to bed for a good nights sleep.

Rise and shine, it’s marathon day! We’ve got an early start today, as we travel to the starting line at the Jinshanling section to begin the race. An incredible piece of engineering, the wall stretches 6,000 kilometres westwards from the mountain ridges north of Beijing (fortunately you won’t be running the whole way!). Originally constructed to protect Chinese empires from the 'barbarians' of the north, it's, without doubt, one of the country's most remarkable achievements and an iconic destination. Choose to run the 10km, half or full marathon for a truly unforgettable, but challenging, experience. There are three types of track on the marathon route: tarmac roads, 10 kilometres on the Great Wall itself, and rocky, narrow paths alongside the wall and through the surrounding countryside. Parts of the wall are unrestored so you'll need to concentrate in order to keep your footing, while the mountain paths can be slippery with gravel and very steep in places. There are many steps and slopes along the way, so be prepared for some tough terrain. There are also a number of snack stops dotted along the trail, providing energy-boosting bananas, sports drinks, chocolate bars and local snacks. First aid teams are also available on site - they'll be positioned in the trickier parts of the trail. Some runners recommend bringing trekking poles to make the journey a bit easier. After the run, celebrate your achievements and return to the hotel in Beijing for the night.

Some sightseeing is on the agenda for today. Journey by metro and local bus to Tian'anmen Square, long regarded as the symbolic centre of Chinese power. Framed by the Gate of Heavenly Peace, Mao's Mausoleum, the Great Hall of the People, the National Museum, and with elaborate flag raising and lowering ceremonies at dawn and dusk, it's a place of pilgrimage for many. From here, enter the enormous Forbidden City. Built more than 500 years ago (and off limits to commoners for almost all that time), it’s a truly amazing place. Despite Beijing’s continuing transformation towards modernity, the Forbidden City, thankfully, looks pretty much the way it always has. As you explore the great halls and courtyards, gain a deeper appreciation of the Imperial Chinese court’s might and grandeur during the height of its power during the Ming and Qing dynasties. OK, that’s enough walking; stop for a reflexology foot massage, which will be much needed after yesterday’s epic run!

All aboard the bullet train (approx 6 hours) for Xi’an, the capital of Shaanxi Province and the largest city in northwest China. Once the imperial centre of China for 2,000 years, Xi'an is now a vibrant, modern city dotted with many interesting historical sites. Join your leader on a walking tour to uncover what was once the start of the ancient Silk Road trading route. Visit the Bell and Drum Tower square; legend says that the former was built to restrain earthquake-causing dragons, while the latter is (unsurprisingly) full of drums, once used to mark time and warn of impending emergencies. Wander the narrow streets of the city’s Muslim Quarter, made up of quaint shops, lively markets, groups of white-bearded men in skull caps sipping tea, and the Great Mosque (which is optional). With an exciting mixture of cultures – thanks to its Silk Road history – Xi’an is home to some incredible food, ranging from delicious Muslim fare to moreish little dumplings. Perhaps visit the night markets and try some tantalising local specialties such as pao mo (lamb broth and flat bread), hand-pulled noodles, hot pots and barbecue. After all that running, you’ve earned it.

Take a private bus (approx 2 hours) to visit what is undoubtedly one of the greatest man-made wonders of the world: the Terracotta Warriors. Learn about this incredible archaeological find, discovered by farmers digging a well in 1976, after being buried for 2,000 years. Emperor Qin Shi Huangdi commissioned the clay statues of soldiers, horses and chariots after he ascended to the throne in 264 BC. Three main pits are open to view, where over 6,000 warriors – individually sculpted and with different costumes, heights and facial expressions – stand in battle formation. Return to Xi’an for the evening.

Let’s roll. Today we’ll take a leisurely cycle on the Xi'an city wall, an ancient fortification in the heart of Xi'an, built in 1378 AD. If you’d prefer not to cycle the 13-kilometre wall, you can walk just part of the way instead. The rest of the day is free time to explore Xi'an. This evening, board our overnight sleeper train to Shanghai (approximately 15 hours). Train travel in China may not be entirely luxurious but it's one of the best ways to come face to face with the country and its people, as it's the main form of transport for locals. We use hard sleeper class trains for most of our overnight train journeys. These aren’t as rough as they sound – compartments are open-plan, clean, with padded three-tiered berths (6 to a compartment). Wherever possible, we will group our travellers together, but this depends on group size and ticket availability. Sheets, pillows and a blanket are provided, but some travellers prefer to bring their own sleeping sheet. Food is available to purchase, but we suggest stocking up on snacks for the trip. Safe, hot drinking water is always available. It is a good idea to bring a mug, spoon, knife and fork if you will be preparing your own hot drinks or food on the train (these are not provided in cabins). Basic bathroom facilities with toilets and washbasins are situated at the end of each carriage. Toilet paper isn't always available, so bring an emergency supply. Keep in mind general train cleanliness may not be to the same standards you are accustomed to. An optional upgrade from a hard sleeper to a soft sleeper berth (4 travellers per compartment with a lockable door) may be available for some overnight train journeys on this trip. Please contact us for booking and more details.

Arrive in Shanghai this morning and after settling into our hotel and grabbng some breakfast, head out to explore. Join your leader for a walking tour through historical Shanghai. At the Bund, get a taste of 1920s Shanghai; a spectacular array of art deco-style buildings, formerly belonging to Western banks, line what was once the most important financial street in Asia. Wander the narrow winding lanes (nongtangs), where you can get a real glimpse into what daily life is like for the locals. Walk onwards to the picturesque Yuyuan Gardens where we finish and you are free to continue exploring at your own pace. Perhaps choose to explore the European-influenced French Concession, an area once designated for the French, consisting of the Luwan and Xuhui Districts. Luwan's busy Huaihai Road is home to popular shopping and eating spots, Xintiandi and Tian Zi Fang. The area's tree-lined avenues and Tudor mansions still retain an air of the 'Paris of the East'. Tonight enjoy an optional final group dinner to celebrate the end of your journey with your newfound marathon mates.

Your Great Wall Marathon trip comes to an end today. No activities are planned and you are free to leave the accommodation at any time.