Look behind the closed doors and tents in Wadi Rum and to find a culture usually hidden from the eyes of visitors.. What do Jordanian women do on a summer afternoon? They head to the beach! Bathe in rejuvenating mineral muds nearby, mingle with locals, and retire to the local resort and pool.. Take a cooking class at Beit Sitti, a unique and innovative initiative of three sisters who carry on their grandmother’s legacy and dedication to tradition. Discover their stories and help prepare a delicious authentic meal under the sisters’ supervision.. Join some of the local women for dinner in their home, this will be an informal evening to make new friends and learn the art of Arabic cooking in the home.

What’s life really like for women in Jordan? You know what a hijab is, a burqa is, a niqab. You see women wearing them, perhaps on the news or in your own city. But how many of these women do you know? Join this eight-day adventure in Jordan as we break the barriers of traditional tourism and discover sisterhood in this tiny desert nation. Spend a night in Wadi Rum and learn the traditional art of henna with Bedouin women, and discover how kohl has been used for years not just as a beauty product but to protect the eyes from the harsh desert sands. Spend an afternoon at a local female-only beach, discover the Dead Sea, and visit stunning Petra. Learn the art of Arabic cooking with your local host in her home, enjoy afternoon teas and gossip time with local women, and even meet a shepherd and help milk her goats. The reason we’ve made this tour just for women is that, culturally, it’s just not possible for men to participate in a lot of the activities on this tour, and we want to offer the best opportunity possible for developing a deeper understanding of Middle Eastern women – with full respect for their traditional cultural values. 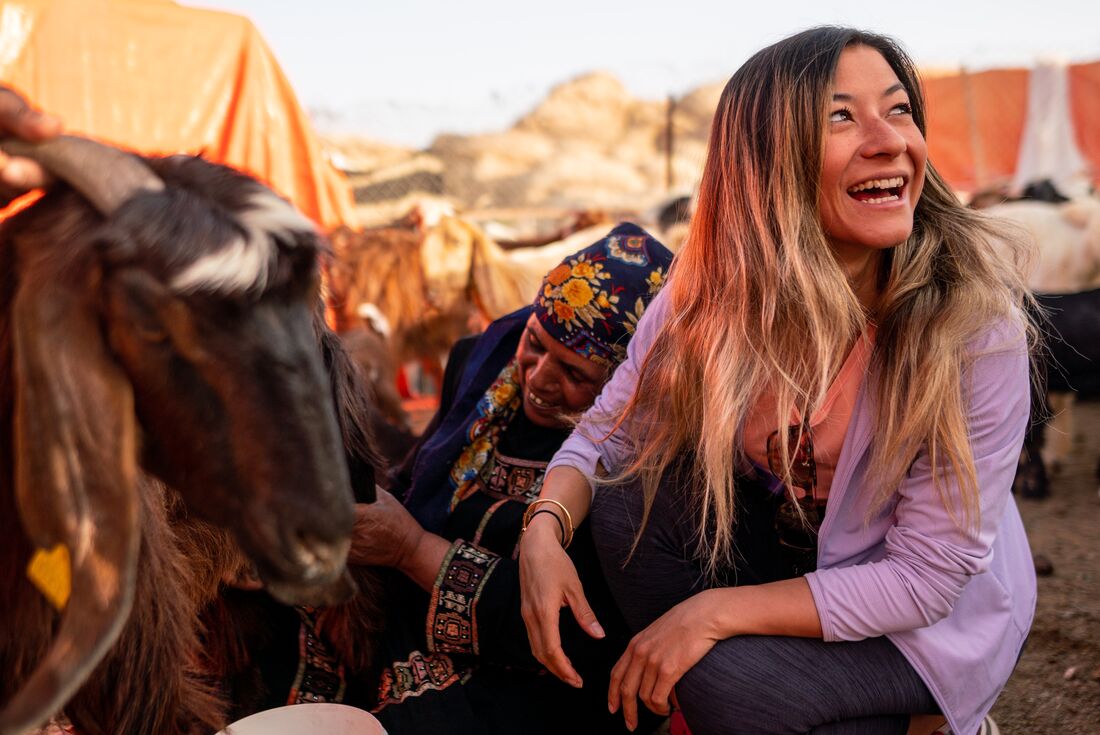 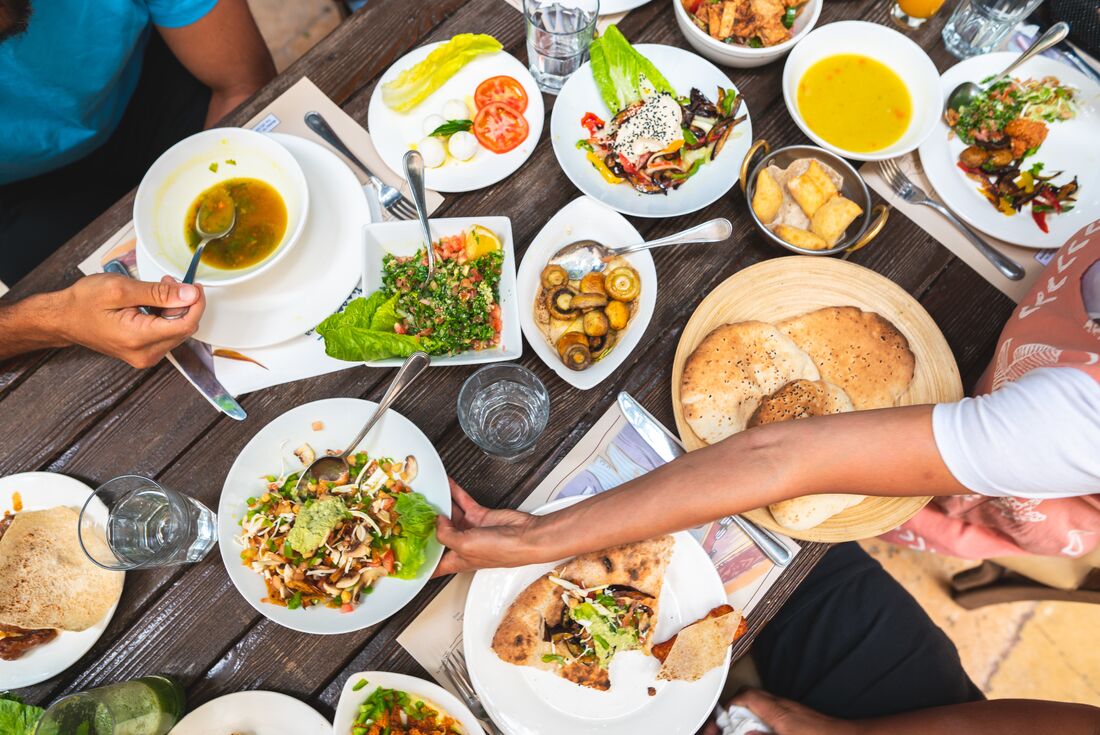 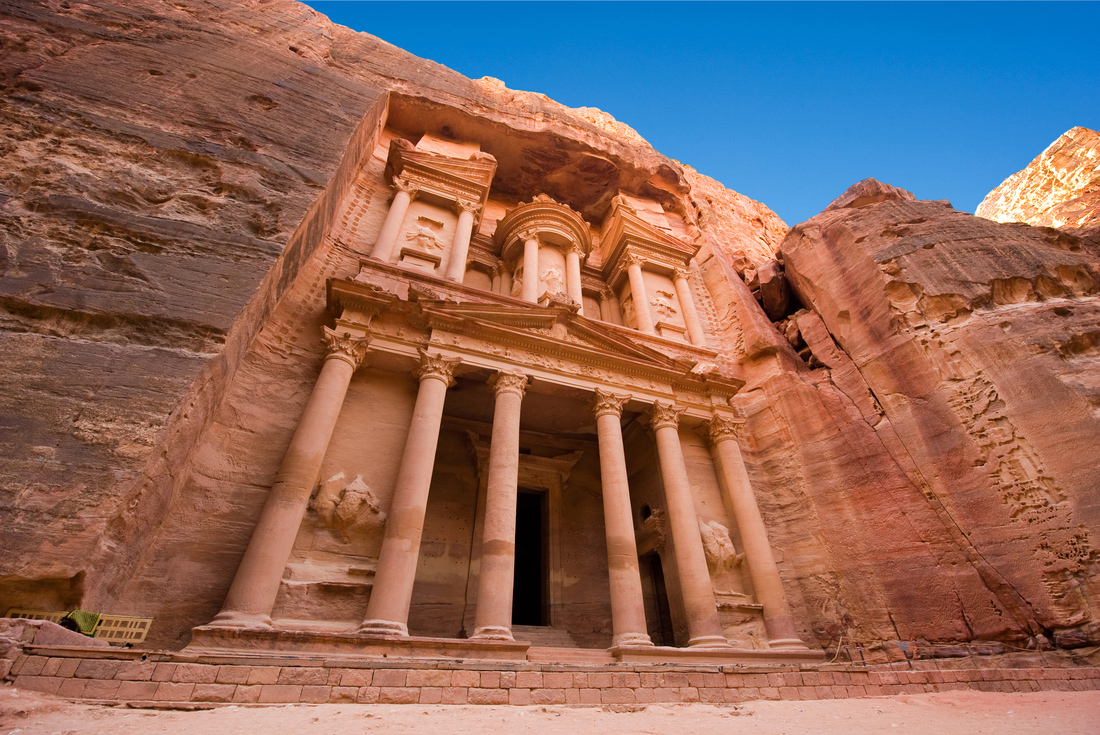 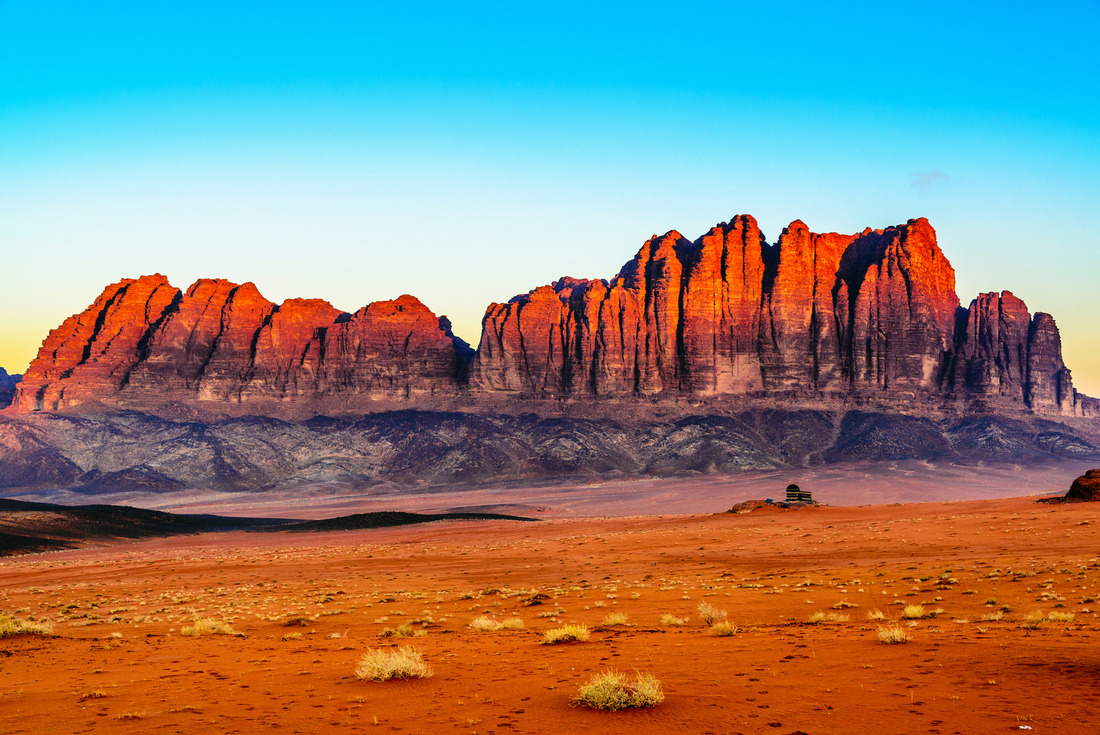 Ahlan Wa Sahlan! Welcome to Amman, a city that's cosmopolitan and contemporary yet steeped in biblical history. Your adventure begins with a welcome meeting at 6 pm, followed by dinner at a cooking school, Beit Sitti, which is run by three sisters who continue their grandmother’s legacy. Learn their stories as you cook and enjoy an authentic meal under the sisters' supervision. On the menu is maqluba, a dish that literally translates to ‘upside down’. It's a hearty casserole with rice, vegetables and chicken that's cooked, flipped and served with either yoghurt or an Arab salad with tahini.

Take a walking tour of Amman, starting with the citadel, Roman Odeon, and the Roman Theatre. Then head over to Rainbow Street, the heart of Amman’s arts and shopping scene and home of the city’s best falafel. A stroll along this lively street takes you past cafes, arts venues, and galleries. Check out the Rainbow Theater, admire 1920s villas, and take in ‘Mango Street’ and Malouf Street, known as ‘Souk Jara Street.’ Sit, relax and grab some lunch afterwards. In the early afternoon we leave Amman for a short drive north (approximately 1 hour) to Jerash, some of the greatest Greco-Roman ruins around. Reaching its zenith as a favourite of the emperor Hadrian, it has a striking collection of archways and theatres, baths, public buildings and colonnaded streets, and is a beautiful place to spend an afternoon exploring. Returning to Amman in the early evening, for a free evening

It's an early start this morning as we drive (approximately 4 hours) to the rugged sandstone mountains of Wadi Rum. Discover the Rum the way the locals do – in rather old, rickety (but reliable) jeeps operated by the local Bedouin community. Later, grab some lunch (not included) in the small village of Rum and a browse around the excellent and informative visitors centre. Then it's off to see some of the most stunning desert scenery in the world. Great gouts of rock around Wadi Rum have been eroded by wind and ancient water into fantastical gnarled shapes. Meet your new Bedouin friends, the backbone of Jordan. Ride through sweeping swathes of desert, perhaps wondering how this place could be livable – until you see a Bedouin camp, a group of dark tents low-pitched to the ground. In traditional Bedouin culture, a huge onus is placed on taking in and feeding any visitor, so a very warm welcome is assured. Later in the evening when our drivers depart camp, we'll be joined by local Bedouin women. This is an honour, as these ladies of the desert are usually very reluctant to mix with visitors. Note that it will be necessary for one man to be present in the camp, as per local culture. This evening we learn the ancient art of henna and discover the natural kohl of the region (and how to apply it just right). When it's all over, fall asleep under a huge expanse of stars.

After waking up in the unique surrounds of the Bedouin camp this morning, enjoy a walk around the area (the length of which will depend on your energy levels) before scaling one of the large dunes to enjoy sensational views of the surrounding area. Keen photographers will be delighted. Mid-morning departure to the 'Rose City' of Petra (approximately 2.5 hours). The Rose City remained unknown to the western world until 1812, when it was discovered by Johann Ludwig Burckhardt, a Swiss explorer. UNESCO has described it as 'one of the most precious cultural properties of man's cultural heritage,' which should give you a hint of what you are in for. Spend the afternoon on a guided tour. You'll squeeze through a mile-long narrow path, known as the Siq, through huge towers of rock and get your first glimpse of the iconic Treasury, which amazingly was hand-carved out of rock. Back at your hotel, there's time to freshen up before joining some local ladies for dinner in their home. This will be an informal evening, a chance to make new friends and learn the art of Arabic cooking in a home environment.

Embrace another early start as we join a local female shepherd and learn about her day-to-day life. We'll also try our hand at milking a goat. It's a fascinating insight into a very different way of life, one that has remained unchanged for centuries. Afterwards, enjoy a free afternoon of self-discovery as you explore Petra on your own. The site is surprisingly big, and you can explore the old Roman road, temples and several old tombs, as well as the rock-hewn amphitheater. For those with the energy, there's the challenging but highly rewarding walk up the steps to the stunning Monastery (approximately 1 hour).

Travel to the Dead Sea today (approximately 3 hours). After checking into our local hotel, we'll head for the shores of this famously salty sea that marks the lowest point on Earth (420 metres below sea level). This isn’t actually a sea but in fact a super-salty lake, and it's called 'Dead' literally because of the lack of life in it. The density of the water makes it beautifully easy to float in; you'll be going for more of a float than a swim. Spend some time relaxing here and of course snap some classic floating pictures. The mud here is supposed to have healing properties, so make the most of it by covering yourself from head to toe in a nutrient-rich natural mineral mud bath. Later, join the local ladies at a Dead Sea beach resort for the afternoon. The locals are most often found around the pool, which on Saturday is open and available for ladies only. Meet some new friends, relax and enjoy. Dinner is included this evening.

Heading off at 8 am, travel to Mt Nebo (approximately 1 hour), the spot where the prophet Moses is said to have seen the ‘promised land’ and is believed to be buried. Explore this sanctuary and view the remarkable mosaics of the 4th century church. 30 minutes down the road is the historic town of Madaba, famous for its Ottoman-style houses and beautiful Byzantine-era mosaics, including the 6th-century mosaic map of Jerusalem and the Holy Land at St George's Church. Other mosaic masterpieces found within churches and the Archaeological Museum depict a rampant profusion of flora and fauna, as well as scenes from mythology and daily life. Literally hundreds of other mosaics from the 5th to 7th centuries are scattered throughout Madaba’s churches and homes. Later we'll visit Bani Hamida Women’s weaving project. Founded by Save The Children in 1985, this is an intitiative that's done wonders for women rug makers in Jordan. After lunch with the ladies here, continue to Amman and check into your hotel. Afterwards, enjoy a soak in a hamam alongside your newfound sisters, followed by a picnic dinner of local Arabic mezze.

This trip comes to an end today. There are no activities planned and you are able to depart the accommodation at any time.