Explore the Weddell Sea, where Shackleton and his crew drifted for months, and Elephant Isle where they finally landed and the next epic journey began, all while hearing stories from polar and Shackleton expert Tim Jarvis.. South Georgia and the Antarctic Peninsula are rich in history and wildlife. Stand upon beaches teeming with thousands of penguins, see abundant species of whales, seabirds, and seals, and make sense of it all with talks from special guest expert Ross MacPhee.. Toast to the New Year in the southernmost region in the world and enjoy the included onboard celebrations.. Freezing is great but freedom is better. Customise your trip with a wide range of optional activities on top of regular Zodiac excursions. Explore the water by kayak, sign up for a photography masterclass, rejuvenate with some onboard yoga and a massage, take a refreshing polar plunge or camp overnight like a true polar explorer.

Follow in the legendary footsteps of Shackleton and his crew, hear stories from the experts who have delved deeper than most into the great explorer’s life, and toast to the New Year with a celebration like no other. Make your way south from Buenos Aires and spend the days around the Peninsula, Weddell Sea and South Georgia in search of humpback whales, seals and penguins from the bow of a Zodiac, and the evenings making the most of the ship’s onboard luxuries. With land excursions, adventurous optional activities and two special guest polar experts, this adventure is one you don’t want to miss. 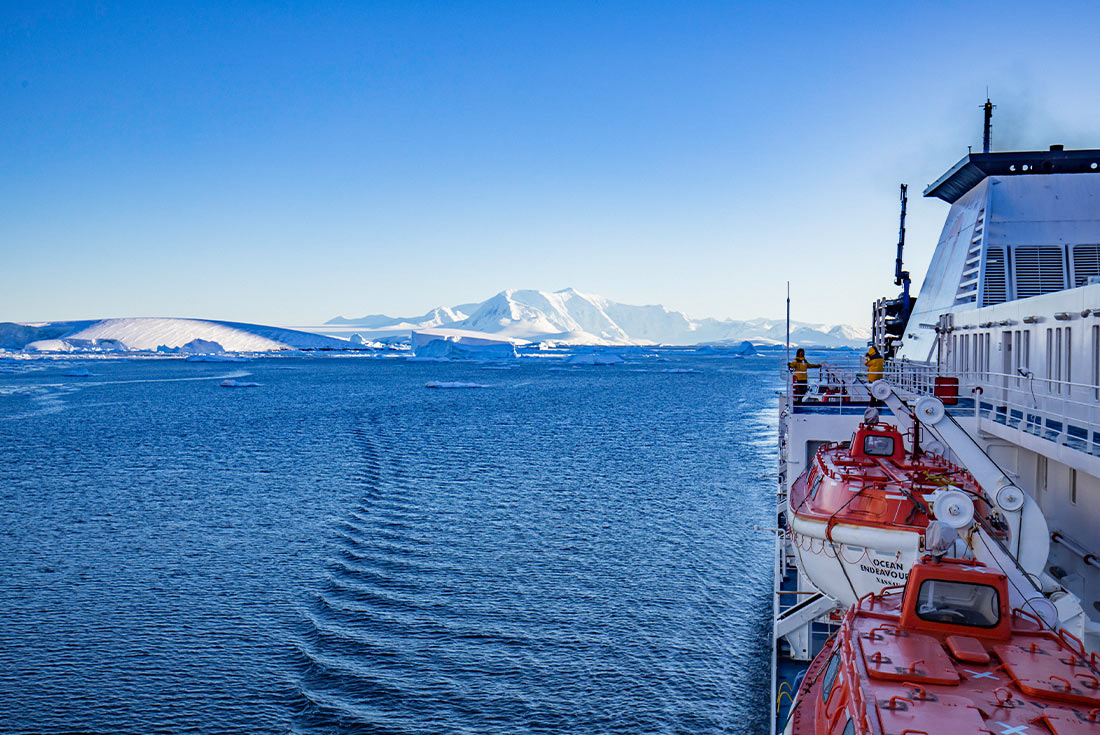 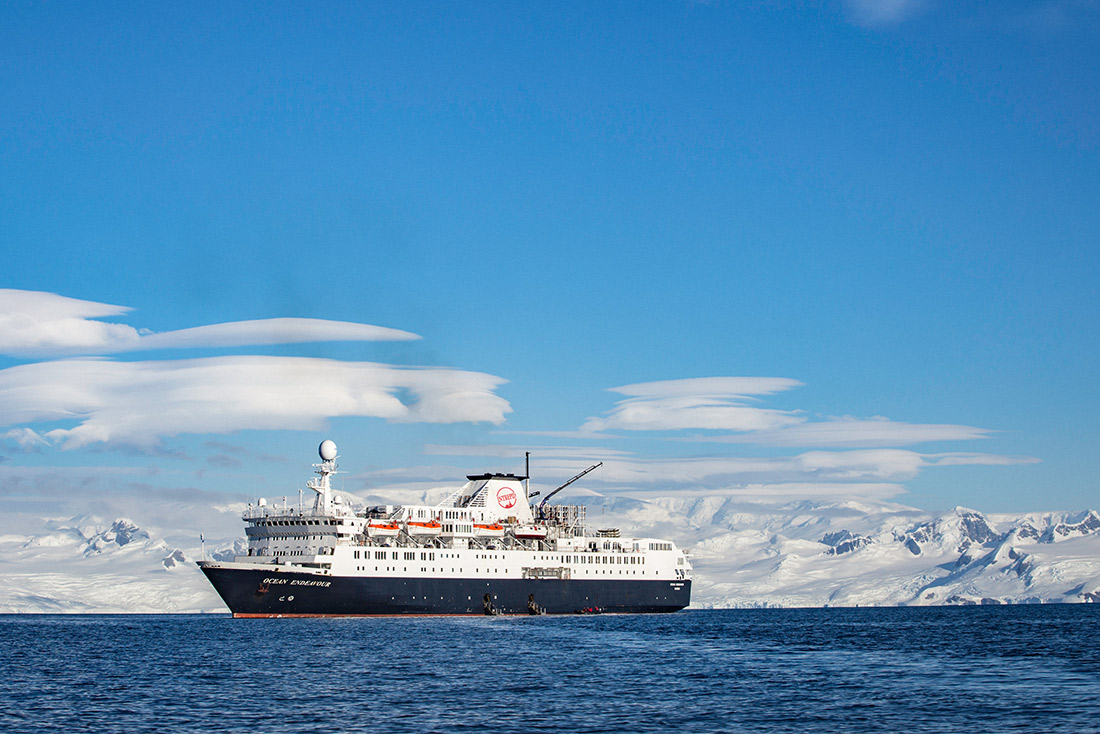 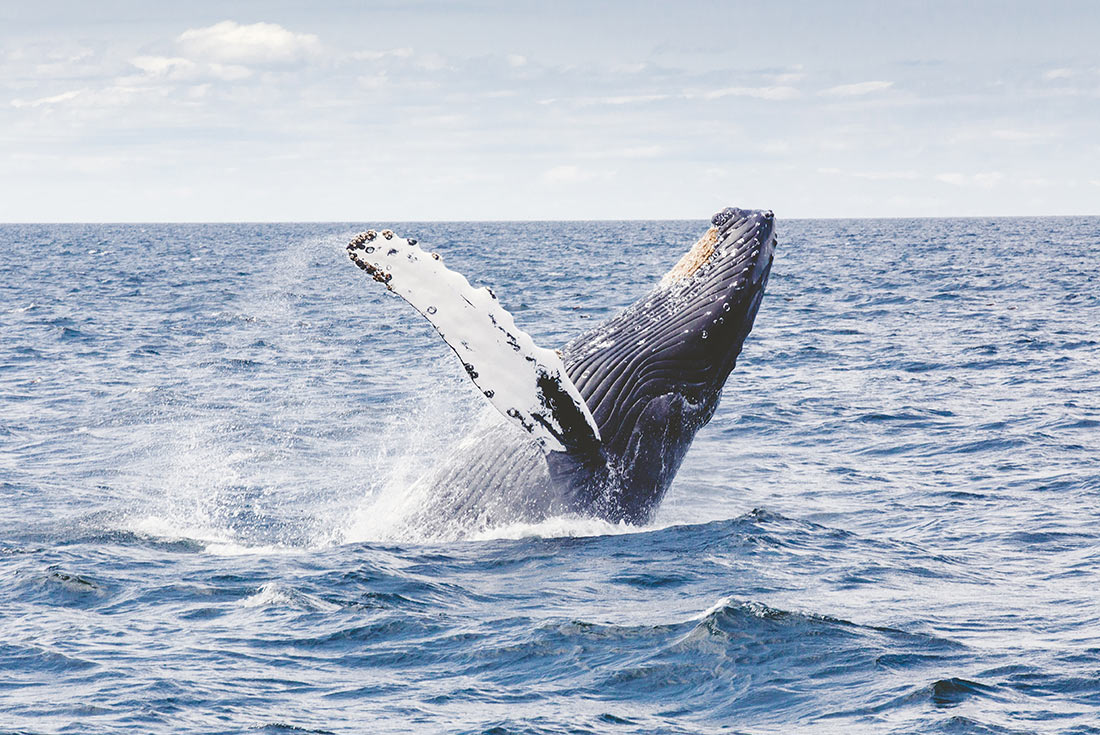 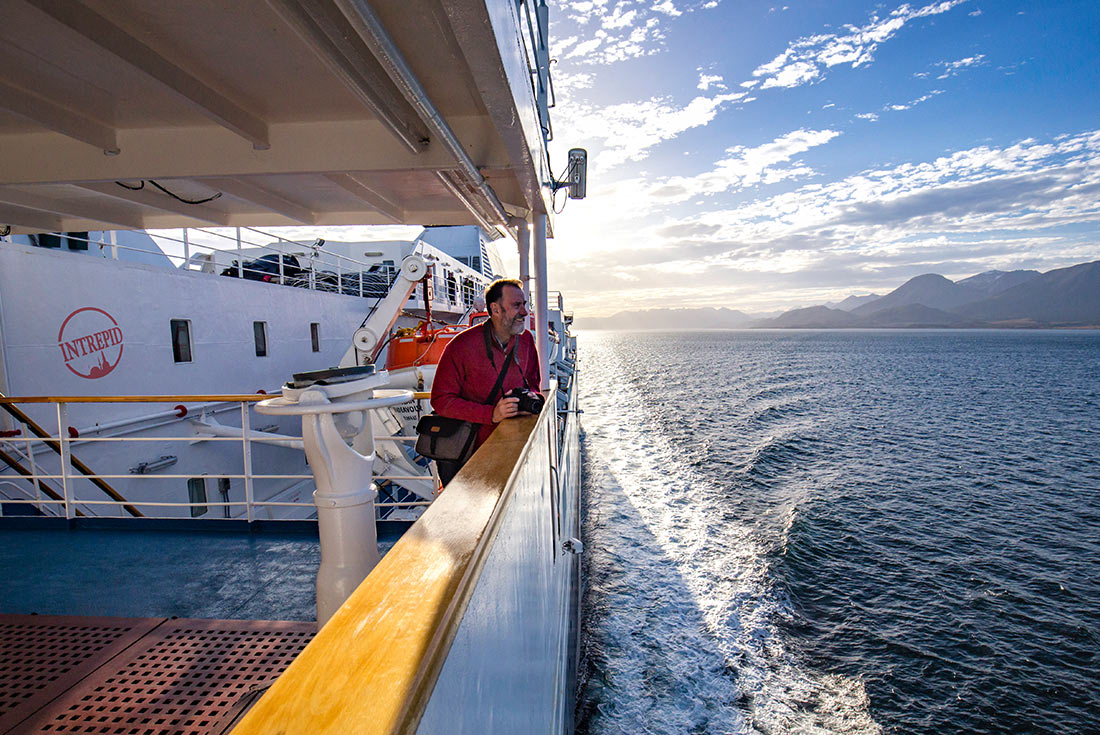 Welcome to Buenos Aires, where your Antarctic adventure begins. Arrive into the city any time today, and make your way to the hotel. There’s plenty to see and do if you arrive early into Buenos Aires. The city features an eclectic mix of European, Latin and cosmopolitan influences, with a thriving cultural and nightlife scene. Comb the antique markets and cobbled streets of San Telmo, see the presidential palace of the Casa Rosada in the Plaza de Mayo or pay your respects to Eva Peron at the famous Recoleta Cemetery.

Begin with a polar rite of passage – crossing the Drake Passage – then spend the next few days diving into the history, geography and wildlife of the Antarctic region with presentations from the expert expedition team members, plus insight into the Shackleton story that you won’t find anywhere else. Enjoy unique talks from two distinguished special guests who have delved deeper than most into the life of Sir Ernest Shackleton. In 2013, environmental scientist, author and explorer Tim Jarvis – with a crew equipped in era-authentic gear – re-enacted Shackleton’s 800-mile (1,300 km) journey from Elephant Island to South Georgia in a replica of the 23- foot whaler James Caird. In fact, the foreword to Jarvis’ book, “Chasing Shackleton: Re-creating the World’s Greatest Journey of Survival,” was written by Alexandra Shackleton, granddaughter of Sir Ernest himself. Also onboard is mammologist, palaeontologist, anthropologist and polar historian Ross MacPhee, a curator at the American Museum of Natural History, which hosted the ground-breaking exhibit “The Endurance: Shackleton’s Legendary Antarctic Expedition.” MacPhee is the author of “Race to The End: Amundsen, Scott, and the Attainment of the South Pole”, and has participated in more than 50 scientific expeditions (including both Polar Regions), while also researching the extinction of early mammals who roamed Antarctica 45 million years ago. Suffice to say, you’re not going to be short of things to talk about over the next few days.

Welcome to the Antarctic Peninsula, where a vast amount of wildlife can be found with a backdrop of ice, water and mountains. The sheer scale of everything must be seen to be believed. No two days on any expedition are the same and landing sites can’t be guaranteed, but our expert expedition crew will make sure each day is memorable. Zodiac rides allow for closer encounters with marine life including whales and seals, while onshore exploration might take you to penguin rookeries or on an optional activity such as kayaking or a polar plunge. The lecture program will continue throughout your time at the peninsula and the team of experts will be available to answer any questions you may have about the region.

The vast Weddell Sea is edged by a seemingly endless coastline of basaltic beaches, islands that tower from the sea, and collections of islands that few humans have laid eyes on. This is where British explorer Ernest Shackleton and his crew began their legendary journey north after their ship was crushed and sunk. There are so many potential landing sites from this location, and aboard the Ultramarine – with its two twin-engine helicopters and 20 quick launching Zodiacs – you’ll be able to explore by sea and air, an experience never before possible until the launch of this game changing expedition ship.

Throughout this special voyage you’ll get the chance to enjoy one-of-a-kind presentations from the expedition team members – and from our two distinguished special guests, polar experts Tim Jarvis and Ross MacPhee. Your days at sea are also perfect for experiencing the superb luxury amenities of Ultramarine, which include a spa and a sauna with floor-to-ceiling windows – where else can you relax with just a towel on and still look out across the incredible polar environment outside. Ultramarine also has more wildlife viewing stations than any ship of its size, so you’ll have plenty of opportunity to stay on the lookout for birds and other wildlife while at sea.

This land mass sits in the outer reaches of the South Shetland Islands, close to the northern tip of the Antarctic Peninsula. The island is where Shackleton and his crew of 28 landed on April 9, 1916, after spending 165 days drifting through the hostile ice of the Weddell Sea after losing their ship – the Endurance – far off the coast. Arriving here 100 years later you’ll see the island exactly as Shackleton and his men first encountered it. It looks harsh and desolate, but to the stranded crew it was a haven, offering vital shelter while they waited for rescue. We hope to visit Point Wild, located on the northern shores of the island, where Shackleton and his men were able to come ashore. From here Shackleton launched his epic boat journey aboard the James Caird, and where his men waited for his return. If conditions allow, we will attempt a landing or Zodiac cruise around Elephant Island, which will give you a real sense of just how impressive Shackleton and co’s survival really was.

Whoever said New Year’s is a disappointment obviously hasn’t celebrated it in Antarctica. The inaugural season of Ultramarine, much like Shackleton’s feats in Antarctica, makes for a memorable moment in polar history. In addition to the New Year’s celebrations aboard Ultramarine, your days at sea are filled with presentations led by our two special guests and your expedition team, who will prepare you for the wildlife and landscapes that await you in South Georgia. Raise your glass with your fellow passengers and toast a New Year’s Eve party that you’ll never forget.

Make sure you’ve got a seat by a porthole or are out on deck when South Georgia comes into view – the snow-capped mountains are vast and rugged. Over the next few days, you’ll explore a variety of landing sites and areas around South Georgia. While exact excursions can’t be guaranteed due to weather and other conditions, you might find yourself cruising through Drygalski Fjord, watching elephant seals on Gold Harbour or exploring Salisbury Plain.

After more than two weeks of unique wildlife encounters and remarkable landscapes, your journey home begins. Now is the time to reflect on the amazing journey – and New Year’s Eve – you’ve just experienced. Spend time on deck watching for seabirds and whales, enjoy presentations by your expedition team, rejuvenate in the sauna, or indulge in the luxury amenities of Ultramarine – including its spa-inspired suites and beautifully designed lounges and restaurants, or simply relax and reminisce.

Arrive into Ushuaia in the morning after breakfast. After disembarkation the group will tour Tierra del Fuego National Park for a little taste of Patagonia, before transferring to the airport for your flight back to Buenos Aires. On landing, there are no more activities planned for today and you’re free to leave at any time. 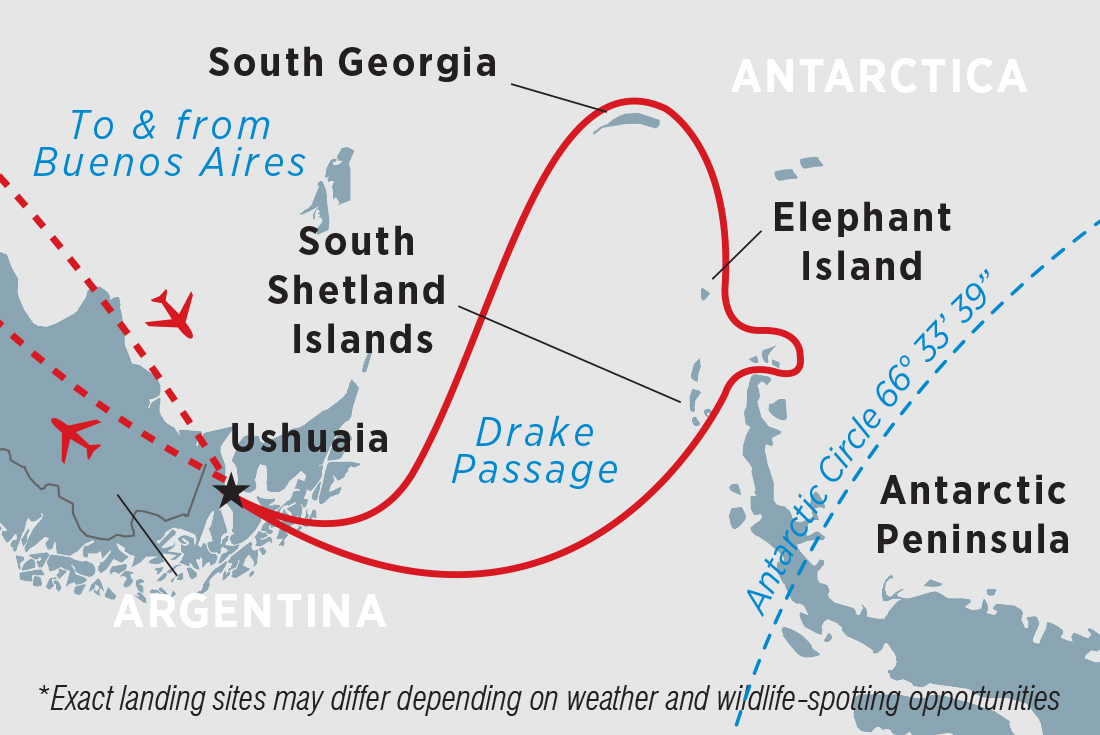