Your voyage at sea brings new experiences every day. Cross the wild and wintry Drake Passage, pass between blue-tinged icebergs and explore the coastlines of a multitude of contrasting islands. Daily Zodiac trips along the Antarctic Peninsula provide unequalled encounters with nature. See thousands of penguins in their natural habitat, elephant and fur seals lining beaches and various species of whales. The Falkland Islands are a haven for birdwatchers. Search for petrels, cormorants and Black-browed albatross before heading to the pub to rub shoulders with friendly locals in Port Stanley. Discover the old abandoned whaling station of Griytviken in South Georgia, paying your respects at the grave of the explorer Sir Ernest Shackleton

This extended expedition encompasses the wildlife paradise of South Georgia, the remote Falkland Islands (Islas Malvinas) and the extraordinary beauty of the Antarctic Peninsula. You’ll experience a great diversity of landscapes and unprecedented wildlife viewing opportunities. Join us for the quintessential Antarctic experience for polar travellers! 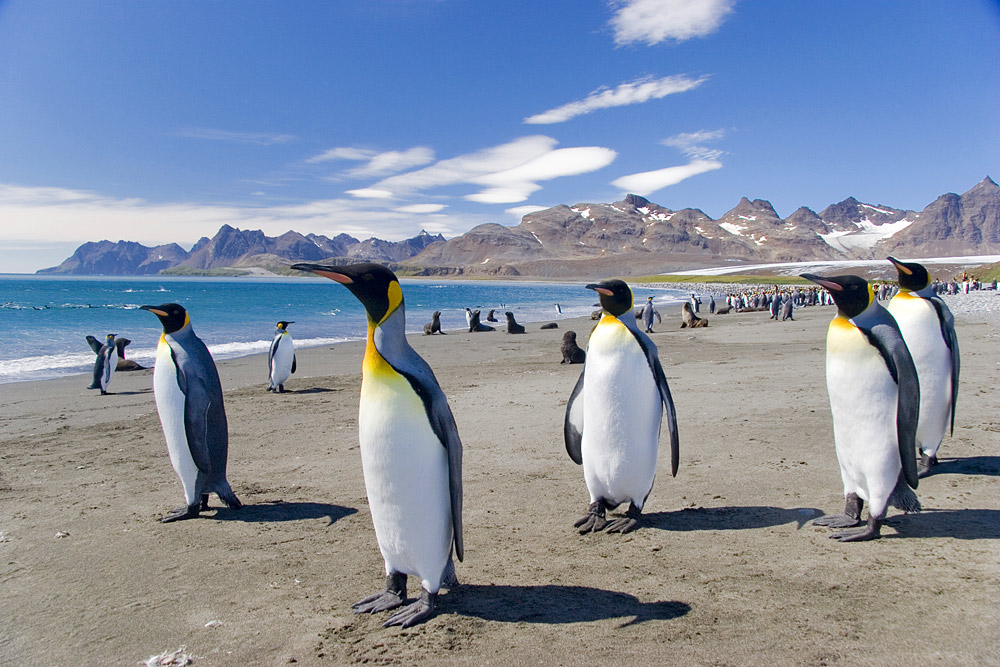 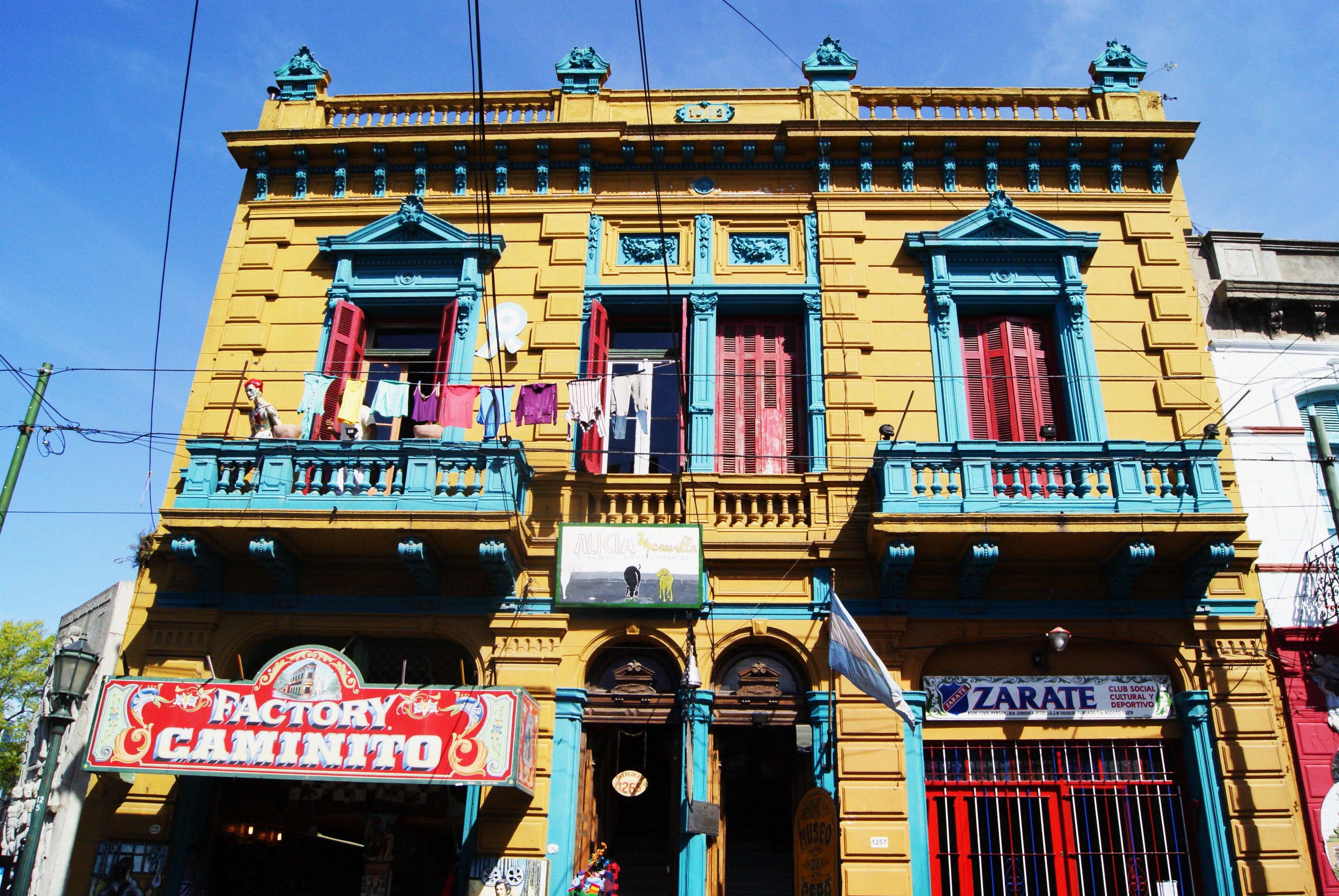 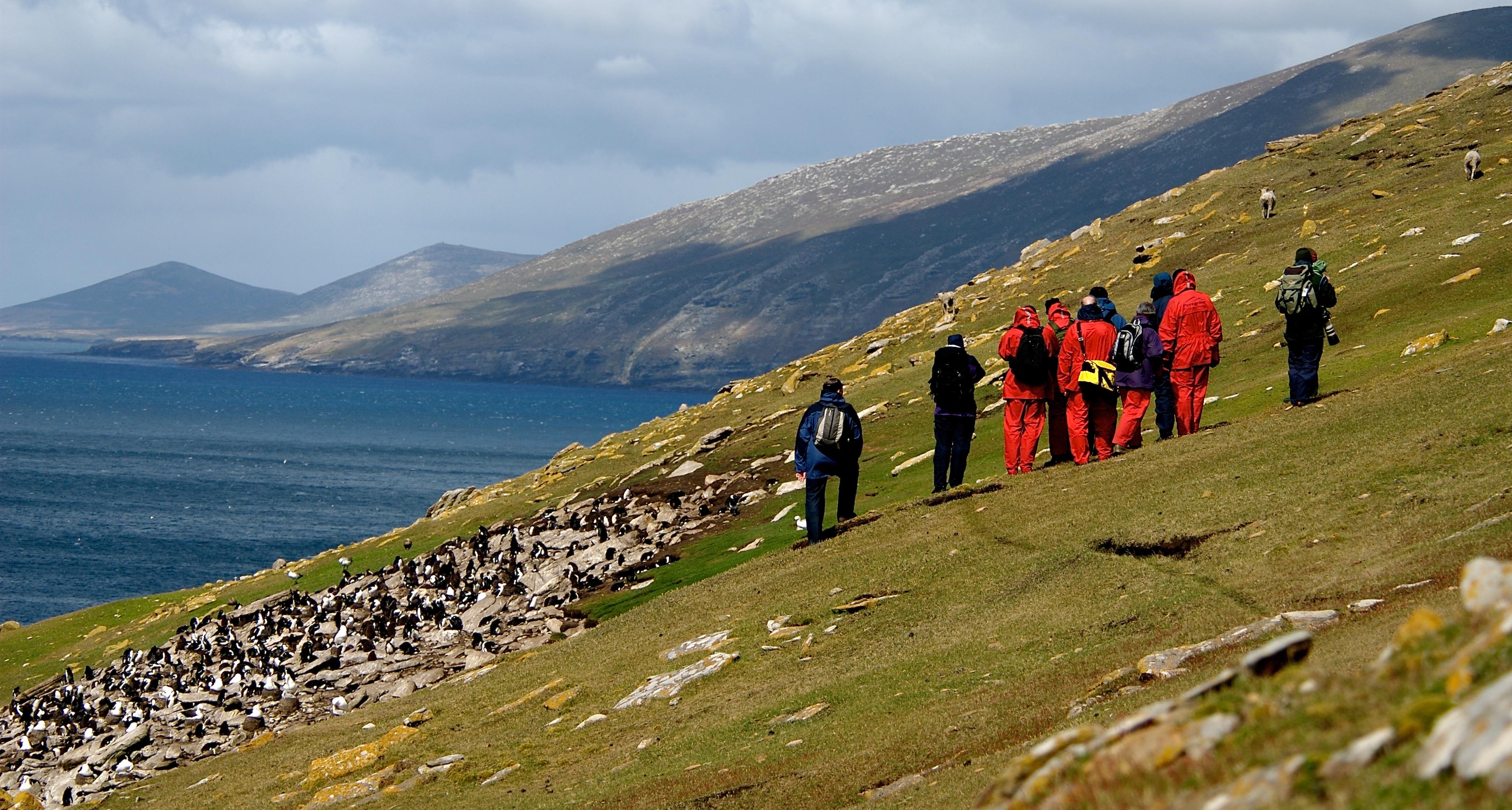 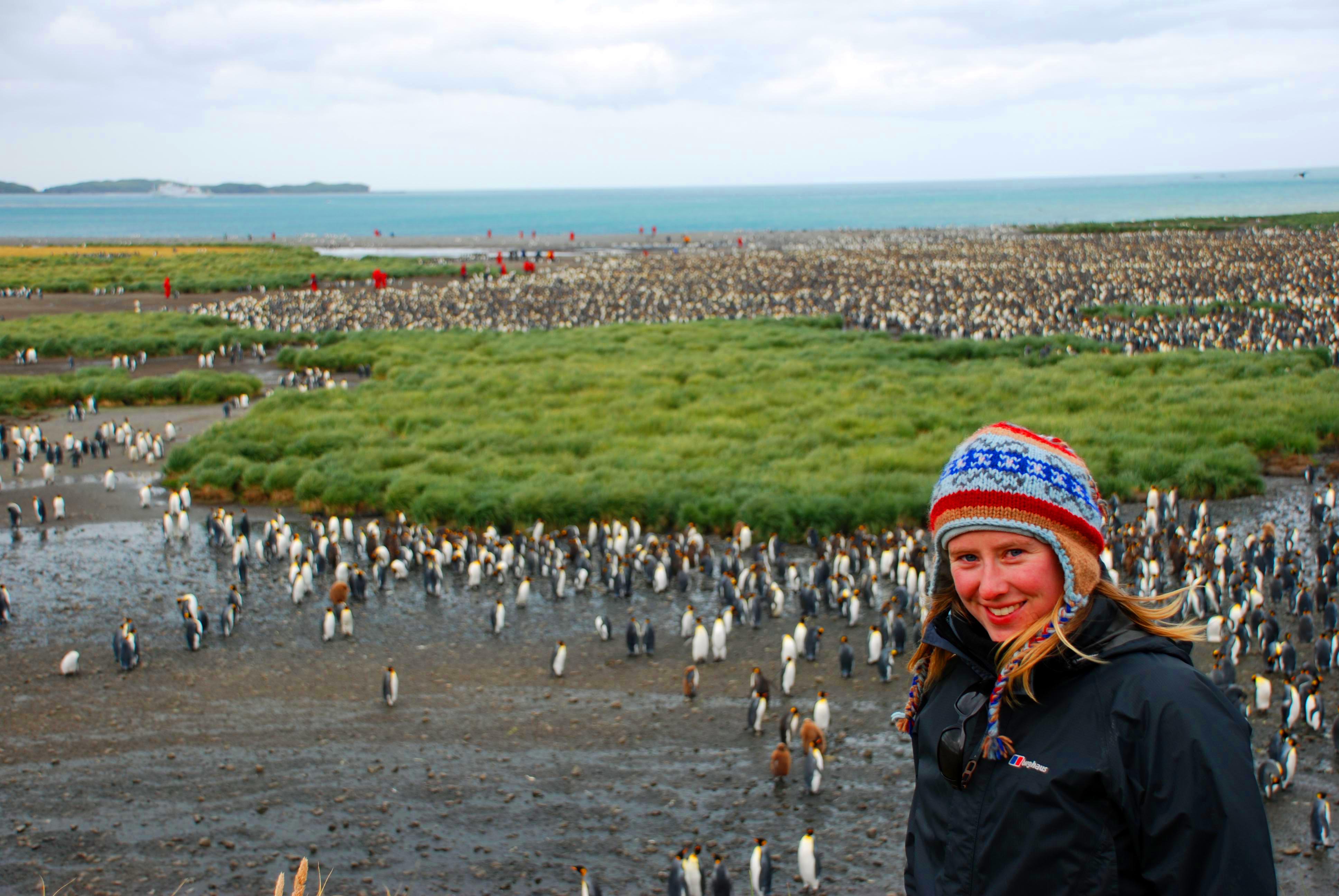 Welcome to Buenos Aires. Begin your Antarctic Explorer adventure with an overnight stay in this Argentinian metropolis and explore its sophisticated streets. Note: A transfer from Buenos Aires airport to the hotel is not included, nor are any meals today. If you arrive early into the city or wish to extend your stay and need accommodation, please ask Peregrine or your agent for details and costs.

This morning take a 3-4 hour charter flight to Ushuaia. On arrival enjoy a little free time to explore the charming port town. Board the ship and cruise out through the beautiful Beagle Channel in the afternoon. Named after the British ship the HMS Beagle, this channel is rich with birdlife, so look out for penguins, cormorants and petrels. The waterway transects the Tierra del Fuego archipelago in the extreme south of South America, providing unforgettable scenery along the way.

While at sea, you'll be kept busy by your expedition team, who will prepare you for the adventures to come. The team may include marine biologists, historians, geologists and more. Enjoy on-board presentations about the history and wildlife of Antarctica.

Your first encounter with land after being at sea will be the Falkland Islands (Islas Malvinas). This area is packed with birdlife so you'll be able to use your newfound knowledge to identify particular species of animals. Look out for Magellanic, gentoo and rockhopper penguins, Black-browed albatross and two endemic bird species - Cobb’s wren and the Falkland’s flightless steamer duck. Meet the friendly local residents and explore the islands on daily Zodiac landings. POSSIBLE LANDING SITES IN THE FALKLAND ISLANDS CARCASS ISLAND The 5 mile (8 km) island northwest of West Falkland is owned by Rob and Lorraine McGill. It is a picturesque island, where songbirds nest amongst the luxuriant growth that covers the gently rolling landscape. The island is named for a Royal Navy ship, HMS Carcass, which arrived in 1766. NEW ISLAND The most southwesterly island in the archipelago is about 8 miles (13 km) long and half a mile (800 m) wide. The western side of the island is a cliff 600 feet (183 m) high, while the eastern side slopes to the sea. The ownership of the island is held by Tony Chater and Ian Strange. Both men have turned their portion of the island into nature reserves. STANLEY The deep-water harbor of Stanley was the economic mainstay of the community since the Port’s completion in 1845. Sailing ships damaged while rounding Cape Horn called in for expensive repairs. Stanley is as lively as it gets in the Falklands (Malvinas) and the future of the port may be bright if hydrocarbon deposits off the coast prove to be abundant. WEST POINT ISLAND The Napier family has owned the island since the 1860s. Black-browed albatrosses nest in colonies on cliffs along the water’s edge on the western side of the island. Rockhopper penguins share the cliffs, while Commerson’s dolphins are often seen in the water surrounding the island. The following Optional Activities are available to participate in, on some or all of the departures of this itinerary. These must be booked in advance (additional costs apply) and space is limited. KAYAKING – Our kayaking adventures are the best way to feel at one with the sea. Taken in small groups of maximum 16 people, multiple times per voyage, kayaking adventures are only conducted during calm weather conditions. Kayaking is open to all levels of experience, however kayaking in the polar waters is not suitable for novice kayakers. Beginners interested in kayaking should first take an introductory course prior to the voyage which includes how to do a wet exit. In addition regardless of your experience, we recommend you take part in some kayaking practise prior to the voyage to ensure that you are comfortable on the water in the icy conditions. MOUNTAINEERING – There are many unclaimed or rarely climbed peaks in Antarctica. Imagine standing on an icy ridge looking at the ship in amongst the icebergs far below. This is a once in a lifetime experience. To take part in mountaineering, you must have a good level of fitness as excursions can last up to 5 hours. A fitness waiver form must be completed before taking part in this more challenging option. CROSS COUNTRY SKIING - Cross-country skiing is one of the most efficient ways to travel over ground that is covered in snow and ice, enabling you to travel in Antarctica the same way that pioneering explorers like Amundsen and Shackleton did. With journeys taking a few hours, it is imperative to be in good physical shape. Ideally, you’ll have cross-country skiing experience to partake in this activity, however exceptions may be made for those deemed physically capable. While Quark provides the essential gear, you will be responsible for certain extras such as additional warm clothing and a pair of good sunglasses. STAND-UP PADDLEBOARDING - Combining surfing with kayaking or canoeing, stand-up paddleboarding will give you a very personal and unique perspective on Antarctica. This activity is taken in small groups in good weather conditions on calm bays and harbours, with a Zodiac following for your safety. INCLUDED OPTIONAL ACTIVITIES offered on some or all departures of this itinerary SNOWSHOEING - A novel way to experience the beauty of the polar landscape, and discover remote alcoves and hidden valleys. The rewards of walking atop the snow are well worth the effort, as we’ll be able to visit new places that may be inaccessible on foot. This traditional means of transport across the snow comes from the indigenous people of North America. While you can appreciate a connection with the past, the snowshoes we use today are much lighter and more forgiving than the old wood-weave snowshoes used during the days of the North American fur trade. PHOTOGRAPHY - Antarctica is one of the most abundantly photogenic destinations in the world. Penguins amble across pebbled beaches, whales spy-hop from the crystal blue sea and sparkling icebergs tower in this serene, yet dramatic environment. Whether you own a serious SLR or a simple point-and-shoot, our on-board photography expert provides you with hands-on instruction and technical tips to ensure that you capture the best of your Antarctica experience.

Further shipboard presentations over the next few days will prepare you for upcoming landings and Zodiac cruises along the coast of South Georgia. Cross the Antarctic Convergence, the biological boundary dividing Antarctica from the rest of the southern seas, and sail into true polar waters. Keep warm in the parka provided up on deck and take advantage of the unlimited hot drinks available.

Jagged mountains erupting from the sea, your first sight of South Georgia is spectacular. Once ashore, you might hear a chorus of barking and squealing seals and penguins. Planned activities over the next few days include a series of landings at king penguin rookeries and abandoned whaling stations. Keep an eye out for albatross and petrels, and don’t be surprised if you spot the odd reindeer, as these were introduced by Norwegian whalers in the early 20th century. Perhaps visit Sir Ernest Shackleton's grave at the abandoned whaling station of Grytviken. As landings are dependent on weather and ice conditions, please be aware that plans may change with little notice. POSSIBLE LANDING SITES SOUTH GEORGIA DRYGALSKI FJORD This is a photogenic and dramatic fjord, with sharp and jagged peaks rising out of the sea. Glaciation never reached the peaks of this fjord, giving it a unique landscape. GOLD HARBOUR The backdrop to this harbor is the hanging Bertrab Glacier. King and gentoo penguins call this home, as do rowdy elephant and fur seals. GRYTVIKEN Only a handful of people live, albeit temporarily, on South Georgia, a United Kingdom overseas territory. Two of them are curators of the South Georgia Museum, located in the former whaling station manager’s villa. The church was built for the whaling community and is the only building in Grytviken that is still used for its original purpose. PRION ISLAND Robert Cushman Murphy named this island for the species of petrels seen on the island. Birders will be pleased to know that wandering albatross are also known to nest on the island. SALISBURY PLAIN One of the largest king penguin rookeries on the island is located on Salisbury Plain. The Murphy and Lucas Glaciers flank the plain, creating a perfect backdrop for photographers. ST. ANDREW’S BAY Thousands of breeding pairs of king penguin nest at St. Andrew’s Bay. It is the largest king penguin rookery on South Georgia and is a wildlife spectacle to behold. Reindeer introduced by Norwegian whalers are known to feed on the grass in the area. STROMNESS This abandoned whaling station was in full operation the day that Ernest Shackleton and his companions staggered in after a 36-hour trek across the island. There is a small cemetery here, with the graves of 14 whalers.

Heading south again, spend a couple of education-filled days at sea en route to the South Shetland Islands and the Antarctic Peninsula. Make use of the on-board library and attend more lectures made by the expedition team. If conditions allow, the ship may attempt landfall on the South Orkney Islands, which are officially in Antarctica.

Begin your homeward journey through Drake Passage. Cross your fingers for smooth sailing but be prepared for potentially rough seas. This immense passage separates the Antarctic Peninsula from South America, and was named after the famed English explorer, Sir Frances Drake. Enjoy your last couple of days at sea relaxing with your shipmates and enjoying views from the deck.

Arrive into Ushuaia this the morning after breakfast. After disembarkation, experience a little bit of Patagonia by touring Tierra del Fuego National Park. Transfer to the airport for the group charter flight back to Buenos Aires (approximately 3-4 hours). You should arrive into the Argentinian capital at about 5 pm, but we recommend that any onward flights should be booked to depart after 8 pm in case of delays. 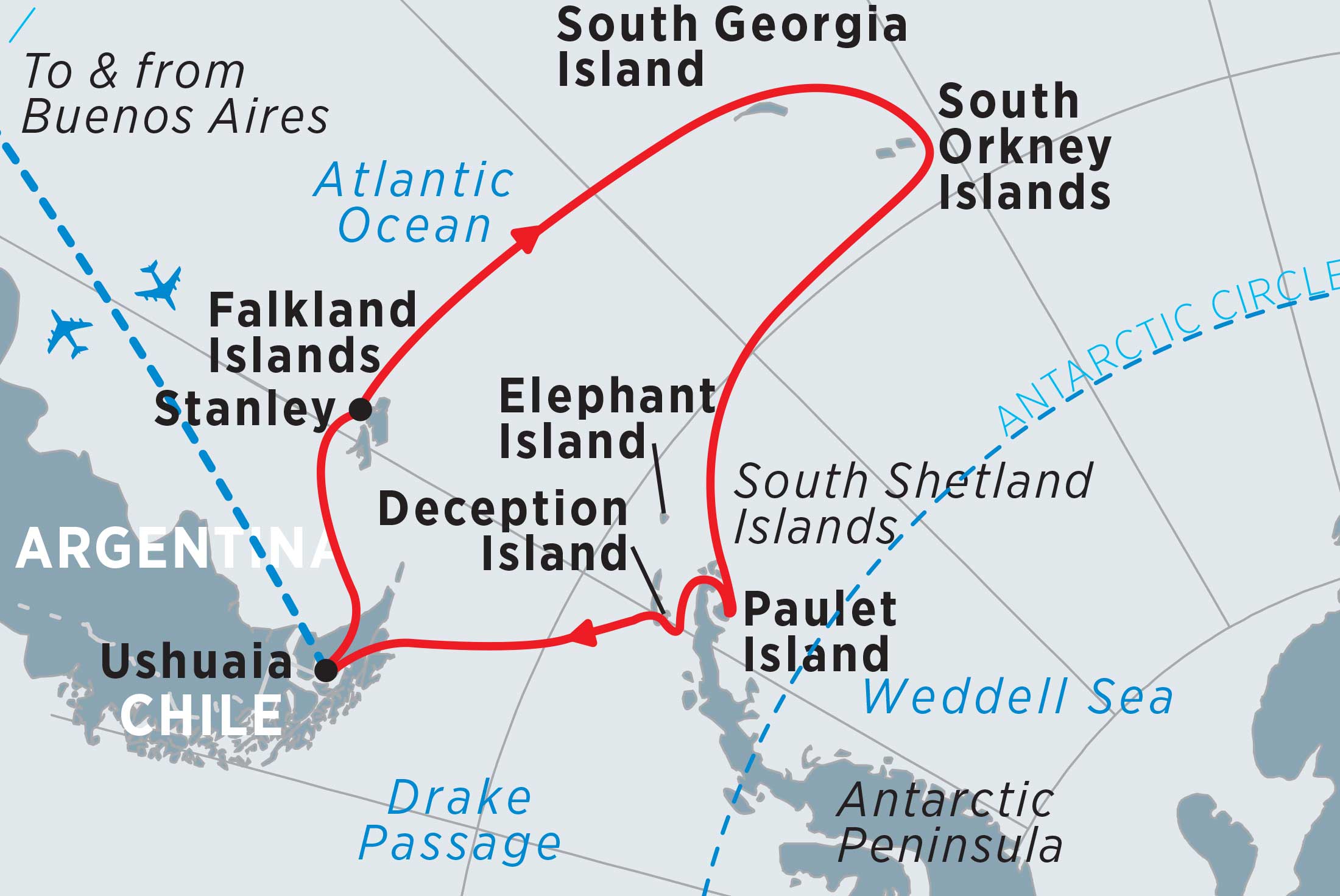