Explore two of Africa’s premier regions for viewing wildlife – the Serengeti and Masai Mara.. Relax in the Ang’ata Serengeti Tented Camp, your feature stay in the Serengeti, perfectly located in the heart of the park but away from the crowds.. Visit the Maasai, known for their vibrant red dress and elaborate jewellery, and enjoy a fascinating talk, full of insights into this remarkable and ancient culture.. Venture through the spectacular World Heritage-listed Ngorongoro Crater by 4WD.

The vast grasslands of East Africa support the largest concentration of wildlife in the world. Over twelve days you’ll get among the massive herds and their predators from the comfort of a 4WD Landcruisers with our expert local leaders at the helm. From Nairobi, travel to the waters of lakes Naivasha and Nakuru, then take in quintessential, breath-taking Africa in the Masai Mara, the Serengeti, and the magnificent Ngorongoro Crater – all filled with iconic vistas and animals. Enjoy plenty of included game drives and walks to spot the local inhabitants – lions, cheetahs, elephants and more. There is nothing quite like staying in the heart of these incredible national reserves, returning to a welcoming camp after days exploring the plains with guides who have grown up on this land, and falling asleep to the sounds of east Africa. This is an unforgettable journey. 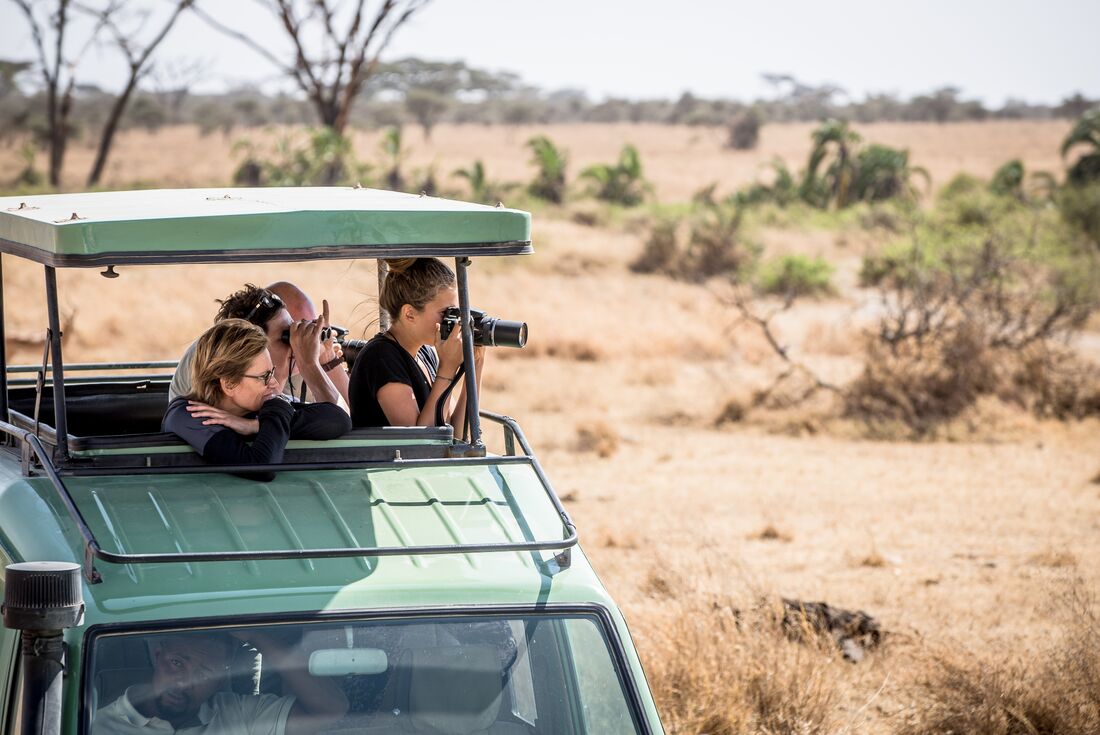 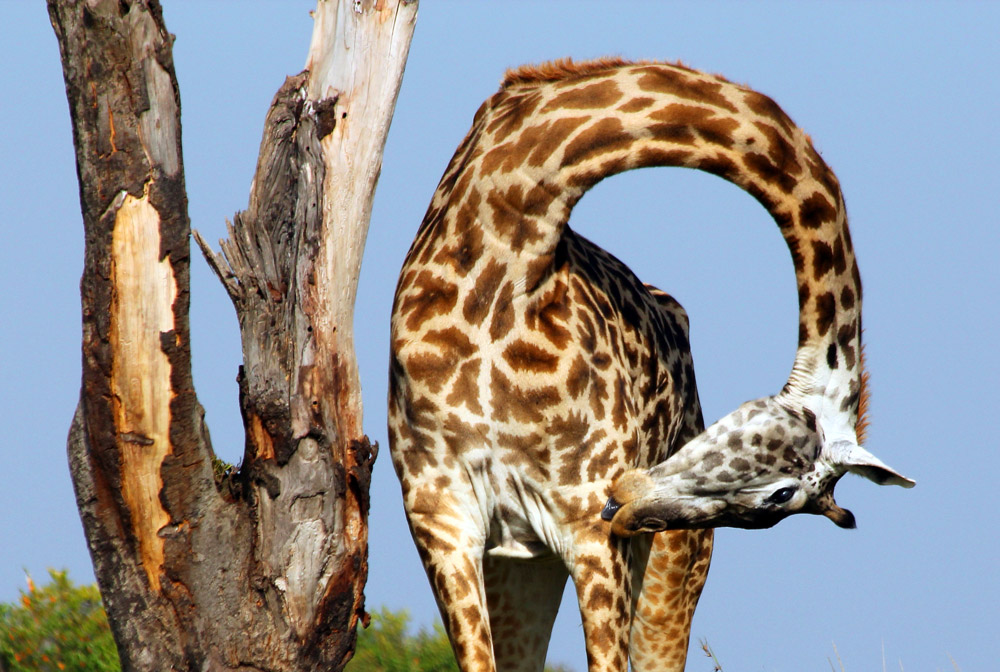 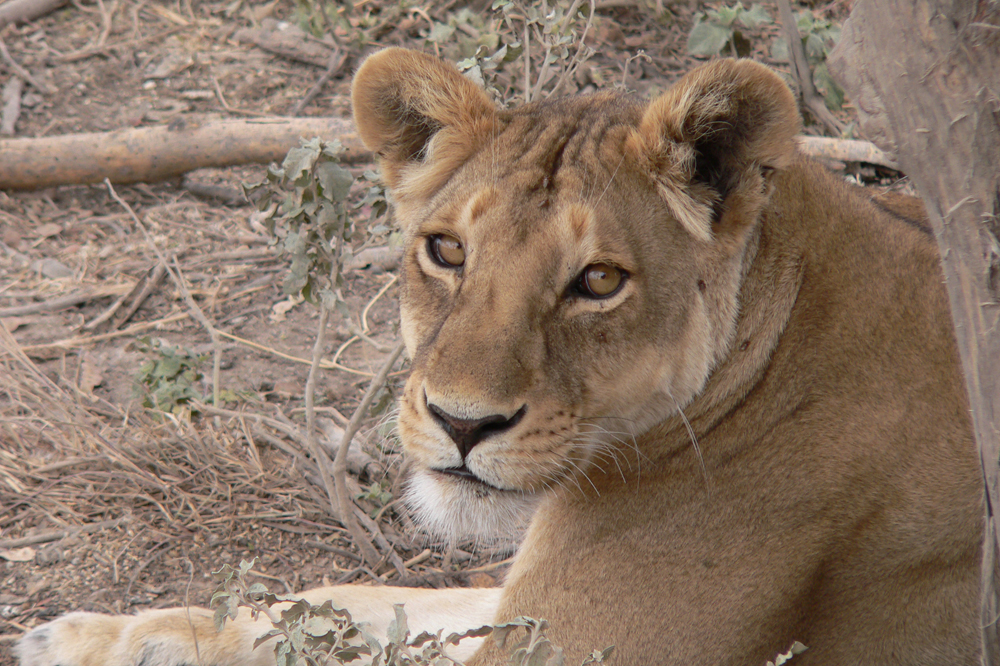 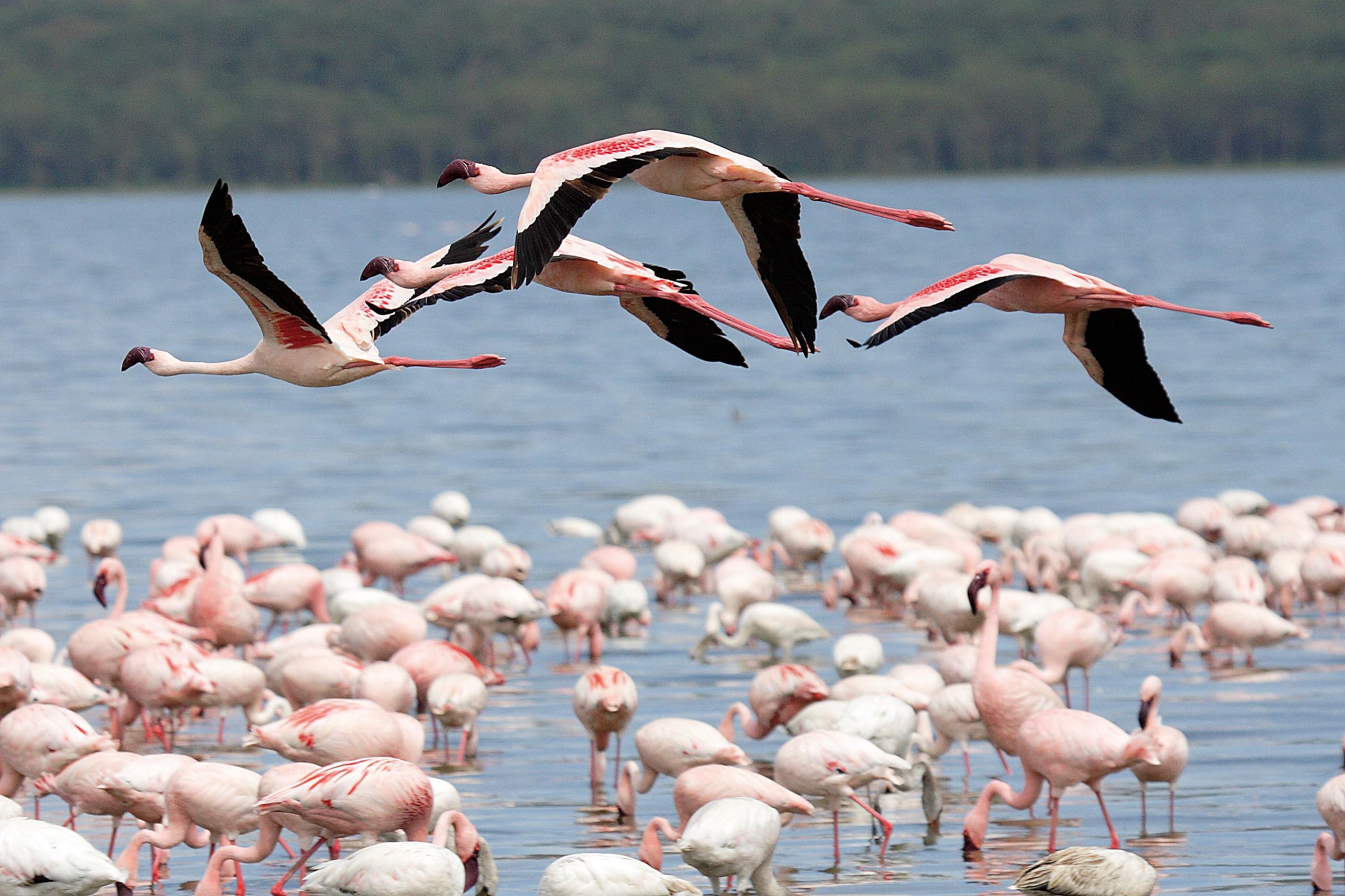 Arrive in Nairobi, Kenya's capital. Meet your Peregrine representative and be driven to your hotel (approximately 45 minutes). There will be an important group meeting at 6 pm this evening. More details about this meeting can be found at the hotel reception. Spend free time today at your leisure.

Depart Nairobi for Elsamere after breakfast and head north, driving along the escarpment of the Great Rift Valley (approximately 4 hours of driving in total). Elsamere is the former home of the writer Joy Adamson, whose 1960 book 'Born Free' helped bring wildlife conservation into the mainstream. The house is a veritable museum that dedicated to the works of Joy and George Adamson, with many photos of Elsa, the lioness that started it all. You'll then embark on a boat trip on Lake Naivasha, the highest of all lakes in the Great Rift Valley and home to many a hippopotamus. Later, enjoy lunch with the lake as a serene backdrop. After lunch, continue to your Lake Nakuru lodge, arriving in the early evening.

This morning you will visit Lake Nakuru National Park by 4WD. Mornings can be cold so it's important to bring warm clothes. You might see why this great soda lake has been described as the world's greatest ornithological spectacle; it amazingly turns into a sea of pink on occasion. Flooding in recent years has unfortunately caused a decline in birdlife. The park boasts substantial numbers of other species, including waterbuck, reedbuck and gazelle. Leopards are also to be found here, and the chances of sighting one is significant. Keep your eyes peeled too, for one of Africa's most endangered creatures, the elusive black rhinoceros (white rhinos are much easier to spot).

Today you will head southwest to the Masai Mara (approximately 6–7 hours), arguably one of the finest game reserves in Africa. Before you arrive, you'll first cross the Great Rift Valley, Africa's immense and spectacular great divide. Pass by the remote region of Loita Hills, home of the traditional Maasai people known for their vibrant red dress and elaborate jewellery. This is one of the key places where the Maasai people still practice their traditional way of life, with little influence from the western world. Make a stop at Tepesua Village, which is known for championing Maasai women’s health and education. You’ll be welcomed by Maasai Warriors by way of traditional song and dance. Meet your Maasai hosts and enjoy a fascinating talk, full of insights into this remarkable and ancient culture. Take a walk to the community village which was founded for widows who had lost their cows due to drought, and can never remarry. The village offers support, safety and economic growth through the ‘Tepesua Widows Income Project’. Here the women are engaged in making handicrafts and sewing eco-friendly handbags, washable sanitary pads, and backpacks to sell to visiting travellers and locals. Learn about village life and be shown around a traditional Maasai home, and their cattle enclosures. We then continue on your journey to ‘The Mara’. After checking into the park, take a short game drive on the way to camp. Set in what is considered Kenya's prime wildlife area, Mara Leisure Camp is located along the Talek River, on the northern boundary of the Masai Mara Game Reserve. Facilities at the camp include a swimming pool, gift shop, bar and restaurant.

Explore more of the park by 4WD today with further game drives in the morning and afternoon. Witness the wonderful procession of wildlife that inhabits the area. Wildebeest, zebra and gazelle are plentiful, and you might even spot predators keeping a casual eye on their movements. Elephants, giraffes and elands are also commonly sighted, along with plenty of bird life. The area is known for its rolling green plains and riverine woodlands, and amongst the many species of game, a black-maned lion, leopard or cheetah might appear, with some luck. As dusk falls, a variety of animals might be visible in the vicinity of your camp also.

Today is a free day. If you wish to continue your exploration of arguably one of the finest game reserves on the continent there are a number of optional activities that you can choose from including half-day or full-day game drives or walking safaris. A morning game drive involves waking at dawn for a light breakfast followed by an early morning game drive, setting off at sunrise and returning to the camp three to four hours later. An afternoon game drive departs around 4 pm and returns after sunset. On returning to the camp, freshen up before joining other guests around the campfire for a pre-dinner drink. An optional balloon ride over the Masai Mara at sunrise is an unforgettable experience. If you have pre-booked this activity you will be picked up from camp before dawn and driven to the launch site for a safety briefing with your pilot. You then glide through the dawn, sometimes at tree height, making the most of the amazing photo opportunities. Sometimes you'll ascend to get an overview of the enormity of the Masai Mara plains and the early-morning movements of the teeming herds. Upon landing you'll be treated to a bush breakfast before re-joining your group.

Say goodbye to the Mara and head to Kisii (approximately 5 hours). Once arrived stop for lunch (at your own expense) and visit a local soapstone factory in Kisii. This town is home to the best soapstone carvers on the continent. Their products are quite popular around the world. It's a favourite stopover for travellers seeking a taste of the exquisite Kisii carvings.

Cross into Tanzania before heading to the Serengeti National Park (approximately 8 hours, not including time spent at the border). These 'Endless Plains' span some 14,700 square kilometres, but their main claim to fame is 3 million or so animals. The game most likely to be seen in the Serengeti are the wildebeest, zebra, gazelle, lion, cheetah, warthog, hyena, hippo and ostrich. You'll take a game drive en route to your camp and watch the landscape change within the park from the vast treeless central plains to thick scrub and forest in the north. Linking these areas is the savannah, dotted with acacia trees and magnificent rock outcrops. Pull up in the park and enjoy a refreshing sundowner and some nibbles before carrying on to you camp. The next two nights are spent at a mobile tented camp, our feature stay on this trip. Meru-style tents are a great place to relax at the end of the day and have large beds, table, clothes rack, sink, 'bucket' showers and a toilet. The eco-friendly camp has a comfortable lounge area, and a cosy mess tent located in the centre of the camp where meals are served. The campfire is ready every evening for appetizers before dinner. This is a unique opportunity to enjoy a real safari camp experience with modern comforts.

Enjoy a full day of game drives in the truck in the magnificent Serengeti. Pull up in the park and enjoy a refreshing sundowner and some nibbles before returning to camp. Perhaps the ultimate way to go game viewing is on a hot air balloon safari over the great plains of the Serengeti National Park. Hot-air ballooning in East Africa can be an unforgettable experience, an exceptional way to see this part of the world. We strongly recommend booking this extra activity prior to departure if you're interested. Tonight we have a private dinner under the stars within our permanent tented camp while listening to the sounds of the Serengeti.

After an early morning game drive, it's time to leave the park and travel through the Ngorongoro Crater Conservation Area to Karatu (approximately 5 hours). It's one of Africa's most beautiful nature reserves and the world's largest intact caldera. Upon arrival you will check into your accommodation, which is located on the lower slopes outside of the crater. This small and exclusive lodge faces the Oldeani Volcano and is located approximately 15 kilometres from the Ngorongoro Lolduare gate.

In the morning, climb aboard the 4WD for your descent to the crater floor. Hopefully you'll see some, or all, of the 'big five' creatures that rule here. Animals within the Ngorongoro Crater are less shy of people and safari vehicles, so it's easier to see them up close. Views from the rim of the crater are sensational. On the crater floor, grassland blends into swamps, lakes, rivers, woodlands and hills. The Masai are permitted to water their cattle at the permanent lake and can be seen leading their animals in and out of the crater. The most commonly seen animals are the lion, wildebeest, zebra, eland, bushbuck, cheetah, jackal, buffalo, Grant's gazelle, Thompson's gazelle and black rhinoceros. The afternoon is yours to spend as you please, perhaps with optional walking activities or a coffee tour.

Drive to Arusha (approximately 3 hours) where your East African adventure comes to an end at the finishing point hotel. Alternatively, you can continue on to finish in Nairobi (approximately another 6 hours). Please review the 'Special Information' below before booking any flights. 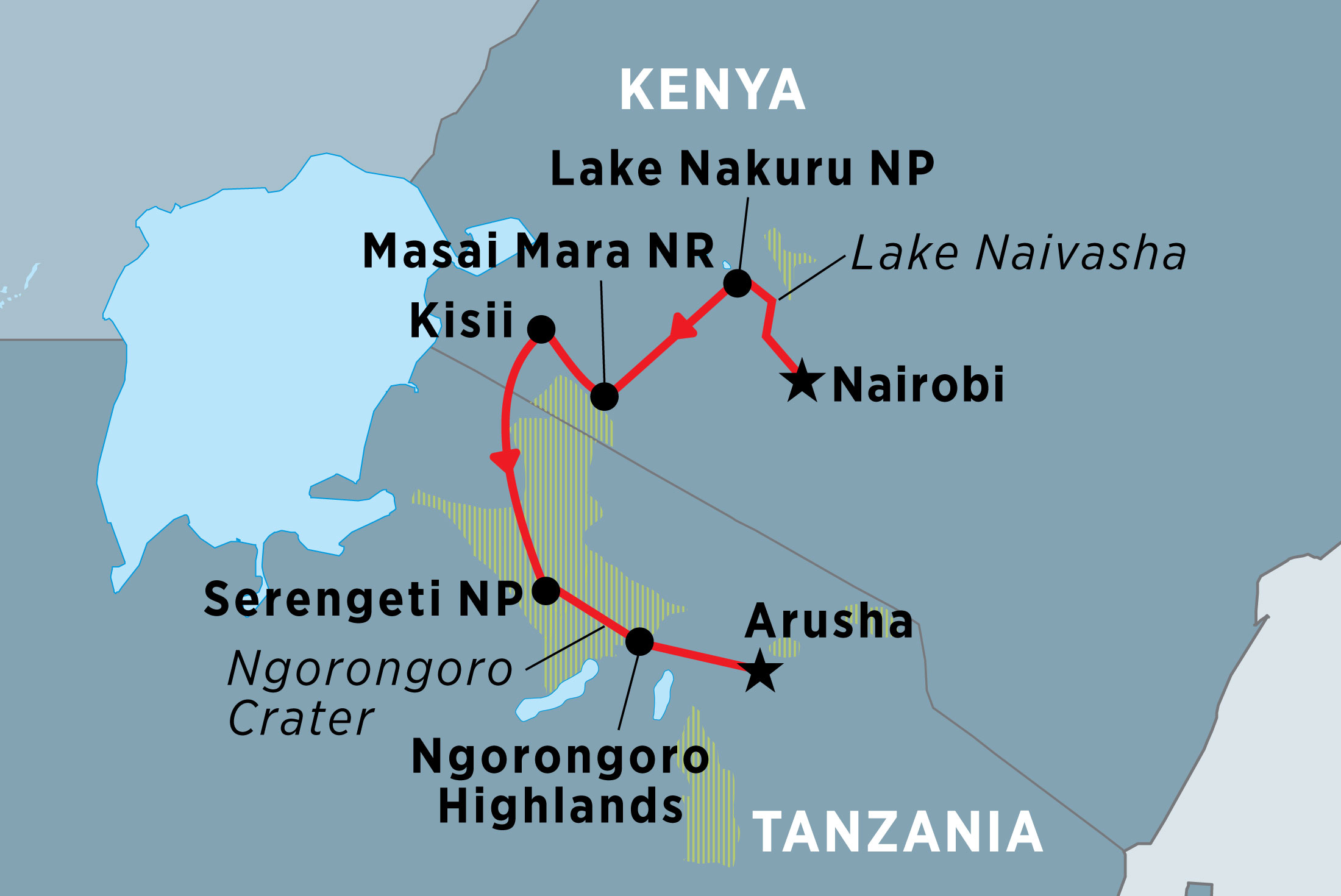