The stars of this trip are the dramatic and varied landscapes of lush Central America. If you’re thinking active volcanoes, idyllic beaches and emerald jungles – this trip has got you covered.. Quaint Suchitoto is a contemporary arts hub with a colonial facade. Explore the flower-studded balconies, galleries housed in 19th-century buildings and a lake teeming with thousands of local birds.. Stray off the beaten track in El Cuco, where the dark-sand beaches are secluded, the surf breaks are pumping, and the sunsets are unforgettable.. Nicaragua is often neglected by travellers in favour of its neighbours, but their loss is your gain! Travel through Central America’s largest country and discover towns largely untouched by tourism.

From tropical cloud forests alive with jungle melodies to vast freshwater lakes and active volcanoes, this pocket of Central America is a pure, unrefined paradise. Relaxing beneath shaggy palms on a dark-sand beach in El Cuco, or spotting colourful birds perched on the colonial facades of Suchitoto. Standing in the shadow of mighty Arenal Volcano or spotting sloths among the canopy of Monteverde, this 17-day Central American journey through Guatemala, Honduras, El Salvador, Nicaragua and Costa Rica is perfect for those who like their Lonely Planet Experience ‘la forma natural’ (the natural way). 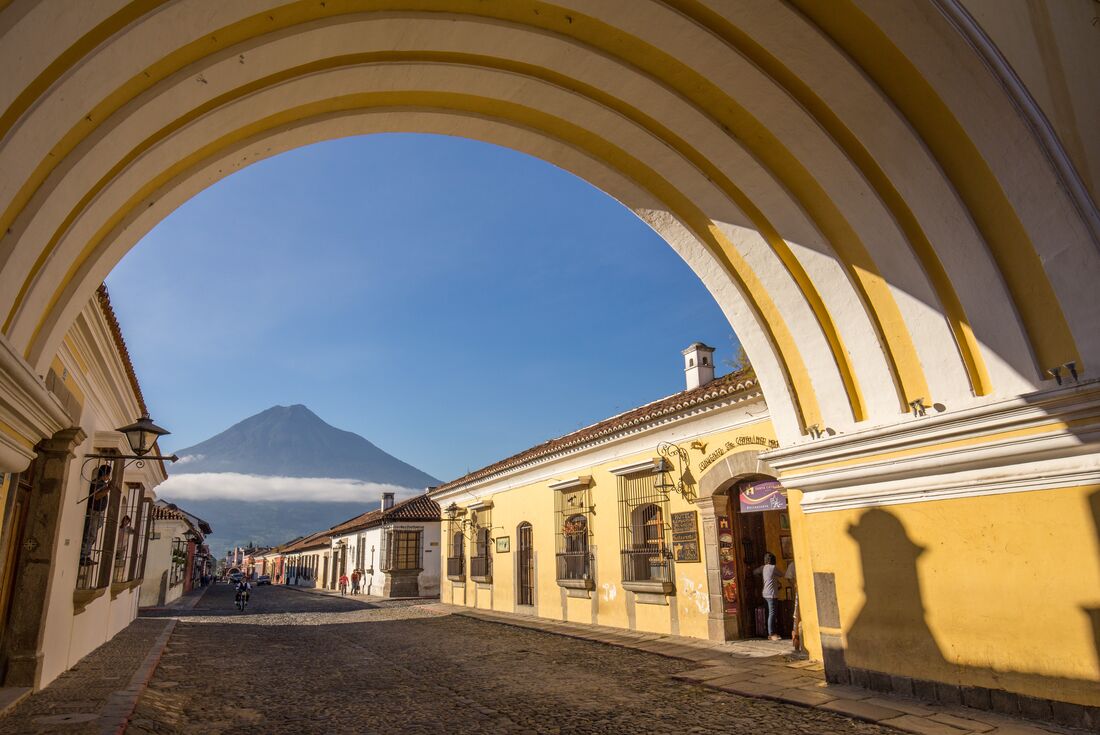 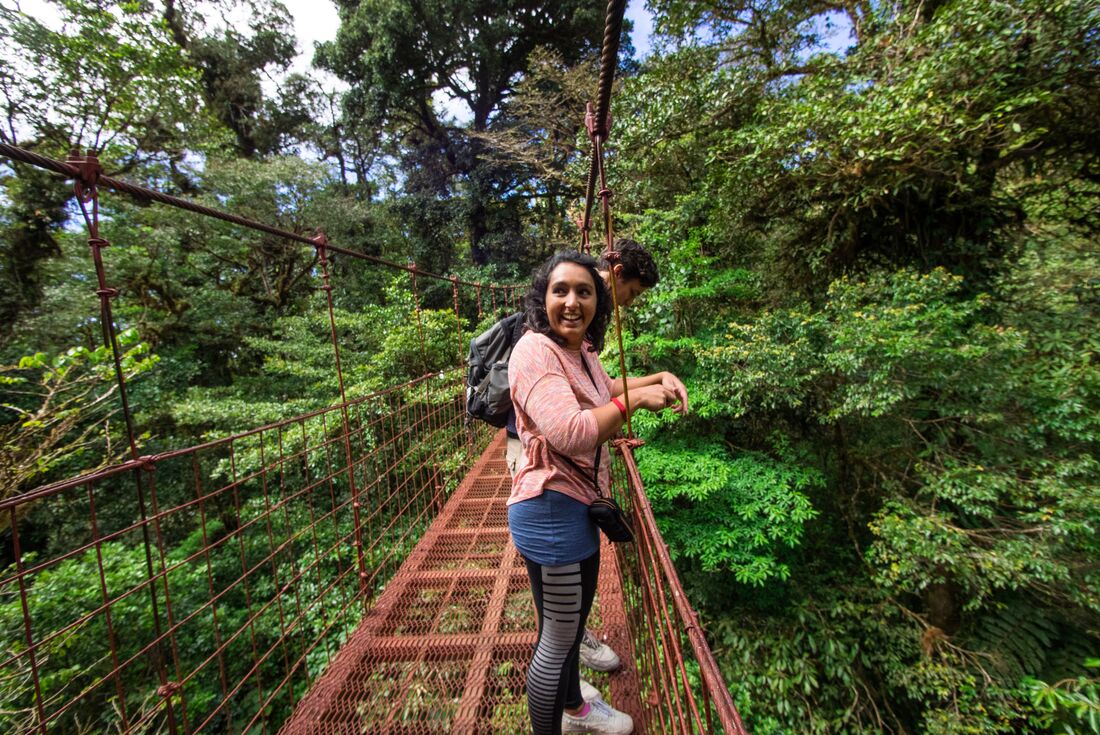 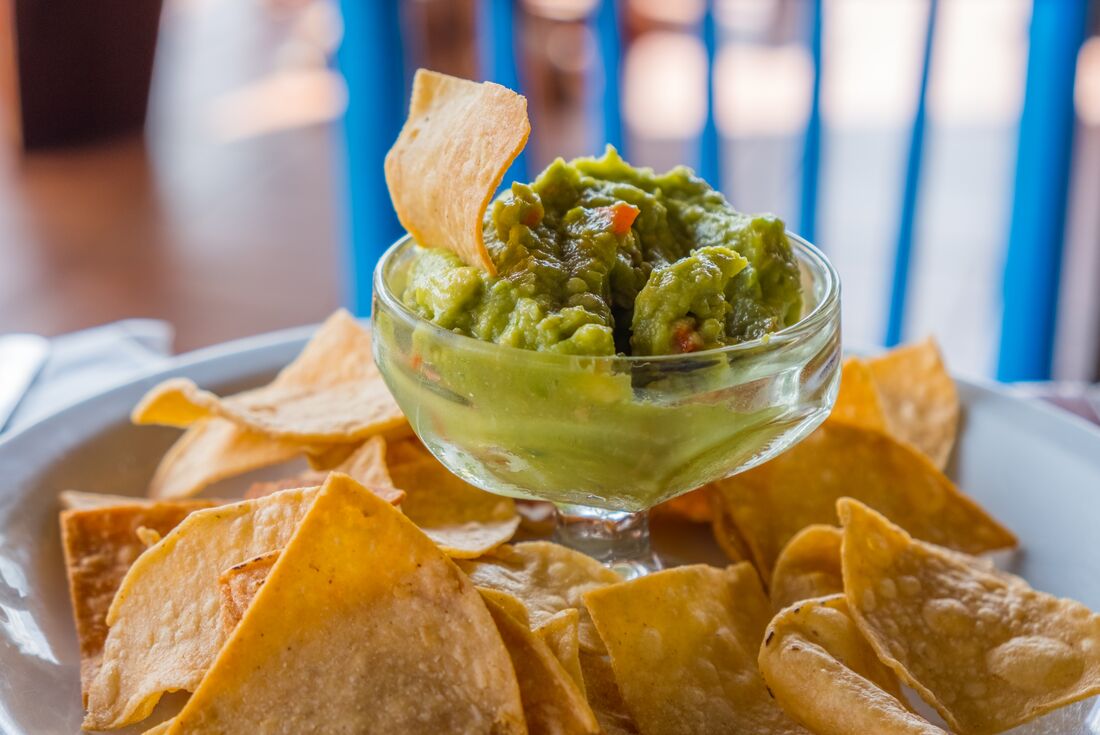 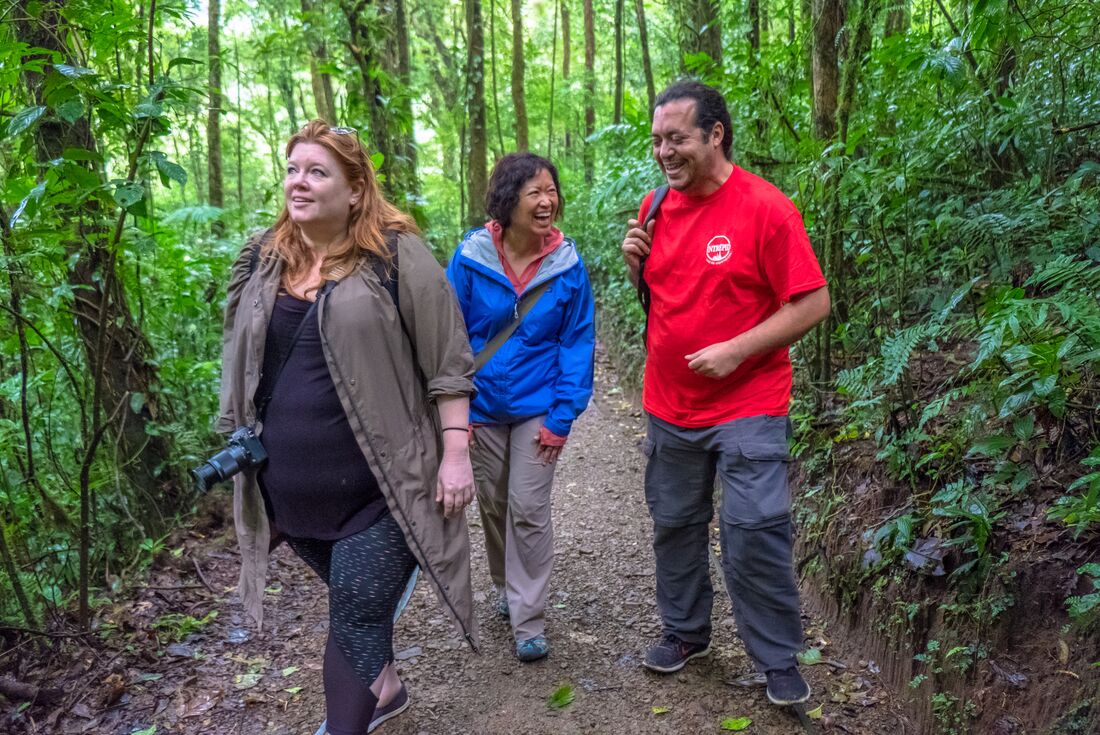 Welcome to Antigua, Guatemala. With crumbling churches, vibrant markets and bohemian cafes set against the backdrop of monumental volcanoes, Antigua is the perfect place to ease into your Central American adventure. Speaking of adventure, yours officially kicks off with a welcome meeting at 6 pm today at the hotel. If you do decide to arrive in the city a little early (smart move!), there's plenty to do. Maybe satisfy your cravings and learn the art of old-world chocolate production at the ChocoMuseo, or sit by the fountain and people watch in Central Park. After the welcome meeting, the night is yours, so perhaps head out with some of your fellow travellers for a tamale: a classic staple of Mesoamerica that sees dough, meat and sauces steamed and served in a corn husk.

Rise and shine for a day of travel, leaving at around 4 am to beat the rush-hour traffic around Antigua. All up you'll be spending around 8 hours driving to Copan by private vehicle, and while the scenery is breathtaking in sections, it's a good idea to pack a book or have some snacks ready to make the journey more comfortable. During the drive, your group leader will run an informal Spanish lesson, providing you some useful phrases to break the ice with the locals. Head into Honduras through the wild countryside of eastern Guatemala, arriving in the charming town of Copan in the early afternoon. While most people use Copan as a base to explore the nearby ruins, there are plenty of other points of interest, both along the cobblestone streets and set into the lush surrounds. Maybe get started in the Central Plaza and follow your nose to a cafe, or perhaps head to the nearby natural hot springs. This optional tour gives you hours of soak time in mud, steaming natural baths and refreshing pools in the lush jungle, with an included dinner.

This morning, take a visit with your group to the World Heritage-listed ruins of Copan, the remnants of the southernmost of the great Maya sites for which Central America is famous. It's unique because of the numerous elaborate stelae – carved columns – still intact on site, and there are also temples, excavated vaults and walls inscribed with ancient faces. Otherwise, nature lovers may wish to travel two kilometres out of town to the Macaw Mountain Bird Park and Nature Reserve. Dedicated to the conservation of the Central American macaw, the reserve also houses toucans, motmots, parrots, kingfishers and orioles. Wave goodbye to Copan early in the afternoon and head across the border to El Salvador by private vehicle. There's another substantial amount of time spent on the road this afternoon (approximately 7 hours). Depending on traffic and conditions, you are expected to reach the colonial town of Suchitoto in the evening, just in time for a late dinner.

Begin the day with a guided orientation walk of Suchitoto – widely considered the cultural capital of El Salvador. Stroll past gorgeous colonial facades and get your bearings. Birders will want to crane their necks – Suchitoto lies on a bird migration path. The rest of the day is all yours to relax or join the optional activities on offer. Suchitoto overlooks the Embalse Cerron Grande. Also known as Lago Suchitlan, this freshwater lake is a haven for the aforementioned migrating birds, particularly falcons and hawks. Maybe hustle a crew of four or more together and take a boat trip to Bird Island, or perhaps grab a historically-minded quartet for a guided walk through Cinquera Forest, where guerrilla fighters used the forest as cover during the civil war.

This morning, get your chef’s hat on with a pupusa making session in a private home. These thick cornmeal flatbreads are a classic Salvadorian recipe from the Pipil culture, and are stuffed with some delicious ingredients, like cheese or chicharron (fried pork). Later on, head to coastal El Cuco (approximately 5 hours). There are some great dark-sand beaches close to town, including the beautiful Playa El Esteron and Playa Las Flores – one of the best surf spots in the country. Maybe head to a beach for a swim or relax under the palms with a beer while you wait for sunset. As night falls, you could enjoy a seafood dinner along the water – the local crab are some of the tastiest in the country.

Today you're free as a bird to explore the beautiful coast around El Cuco at your own pace. If you and a few others feel like getting active, you could take a trip to see nearby Conchagua Volcano. The views from the lookout are stunning, but you'll need a minimum of five people to take part. Alternatively, you might prefer to take a boat out on the ocean, find some inner peace during a free yoga class at the resort or simply relax in a hammock on the beach. Life’s good.

Rise early for a full day of travel by private vehicle. Leave El Cuco at around 8 am and drive to El Amatillo border crossing (approximately 1.5 hours), before a 2.5 hour drive by of Honduras (including a stop for lunch) to the next border crossing Guasaule, and finally reaching Leon after another 2.5 hours. Upon arrival your leader will take you on a walking tour of this charming city. Though it's the second largest in the country, Leon is relatively free of tourists, making strolling the mural-lined streets a real pleasure.

Make the most of Leon in the morning. The street food behind the Lady of Grace Cathedral is some of the best in town, so why not grab a 'Nica taco'. Made with maize, rolled and then deep fried, these beauties are usually served with shredded cabbage and smothered in cream. Otherwise a thrilling volcano sand boarding adventure could be on the cards! In the afternoon, get ready for the 5-6-hour journey to the oldest city in the 'New World'. Featuring Moorish and Andalusian architecture and oozing colonial charm, Granada is set on the banks of Lake Nicaragua and is surrounded by active volcanoes. First, take a taxi from the hotel to the bus station, next board a local bus bound for Managua that will depart when it's full and takes around 2-3 hours depending on the amount of stops it needs to make and the complexity of onloading and offloading the passenger’s luggage. There will be about a 30-45-minute transit in Managua before taking the next public bus to Granada with a duration of approximately 1.5 hrs, and finally taking a 20-minute taxi ride to the hotel. Upon arrival, your leader will take you through the leafy Parque Central and 'La Calzada' – a lively pedestrian street with plenty of bars and restaurants to choose from.

Today is all yours, so explore the city at your own pace. You may want to take a more comprehensive self-guided tour of the city, bargain hard in the markets, or wander the cobblestone streets snapping photos of the colourful buildings. Hundreds of evergreen islets dot the waters of vast Lake Nicaragua, and you can spend a few hours exploring them by boat. Or perhaps hire a kayak and find your own way around, stopping to wave at fisherman who live in wooden huts on the islets, or the monkeys who live in the trees the huts are built from. Just remember not to take a dip, as freshwater sharks live in the water! Alternatively, you could take a day trip out to Mombacho or Masaya Volcano National Park.

Have a morning of leisure in Granada. Perhaps start the day with a classic Nicaraguan breakfast of eggs, rice and beans, soft cheese, plantains and strong coffee. Then maybe hit the Convento y Museo San Francisco and view the collection of indigenous stone statues. At 2 pm take a local bus to Rivas (approximately 1.5 hours) and transfer to the port of San Jorge to catch a 1-hour ferry across the seemingly endless waters of Lake Nicaragua to Ometepe Island. Hourglass-shaped Ometepe is formed by two volcanoes rising out of Lake Nicaragua, one active and one extinct. The island is home to fruit plantations, deep jungle and exotic wildlife such as howler monkeys, caiman and parrots. Spend the evening on the island, and maybe head out for a beer at one of the waterfront bars.

Spend your free day however you wish on Ometepe. You can hike both Concepcion or Maderas Volcano, however, at 1700 and 1340 metres above sea level, the treks are no walk in the park. If you are going to tackle them, ask your leader for a recommendation for a local guide. You should also be aware that even for the very fit, both volcanoes will likely take all day (8–10 hours) to summit and then descend. Instead, you might prefer to splash around in the clear waters of the natural springs, soak up the sun on the beach or check out the ancient petroglyphs (rock carvings) scattered about the island. While the restaurants on the island are of decidedly mixed quality, your leader can give you the lowdown on which places to avoid and which to eat at. Stick to local fare and you'll have more luck – perhaps try indio viejo: a stew of corn, beef, onion, tomatoes and capsicum.

Today is another early start in order to grab a 7 am ferry to the mainland (1.5 hours) and a 1.5-hour transfer to Penas Blancas before crossing the border into Costa Rica. Once in Costa Rica, travel by private vehicle for 5 hours to Monteverde. Phew – long day, but you made it! Welcome to beautiful Monteverde, which you can begin exploring straight away on a walking tour with your leader. Monteverde was founded as an agricultural community in 1951 by a group of North American Quakers. These environmentally-aware settlers also established a small wildlife sanctuary, which has since grown into the internationally-renowned Monteverde Cloud Forest Biological Preserve. Cloud forests are like rainforests, but instead draw their water from a semi-permanent cloud covering the region. This is truly a nature lover's paradise. More than 2000 plant species, 320 bird species and 100 mammal species call Monteverde home. Be sure to keep an eye out for the resplendent quetzal, one of the most elusive birds in the world.