Attend one of the most important festivals of the Inca calendar, Inti Raymi (Festival of the Sun), and witness the colourful processions, traditional dances and historical re-enactments. The floating reed islands of Uros on Lake Titicaca are a marvel of concept, construction and history. Take a boat tour on the world’s highest navigable lake, then spend two nights on a private Island overlooking Lake Titicaca. Visit the iconic Machu Picchu not once, but twice! Witness the winter solstice at Machu Picchu on your second visit. Journey to the magnificent Colca Canyon, which is deeper than the Grand Canyon and dotted with ancient villages

Peru is a country in the midst of a cultural revival. It’s only in the last century that the country’s proud inhabitants have broken free of the shackles imposed by the Spanish conquest to embrace their ancestral Quechua language and customs, including the Inti Raymi – one of the most important festivals of the Inca calendar. Full of colour, movement and spectacle, this unique event offers a rare glimpse into ancient Inca life. Join us on a Peruvian adventure from the capital’s thriving food scene to the wildlife-filled Ballestas Island. Fly over the cryptic Nazca Lines and explore the white streets of Arequipa. Experience not one, but two visits to the iconic Machu Picchu in celebration of the winter solstice and finish up in ancient Cusco in time for historic Inti Raymi itself. 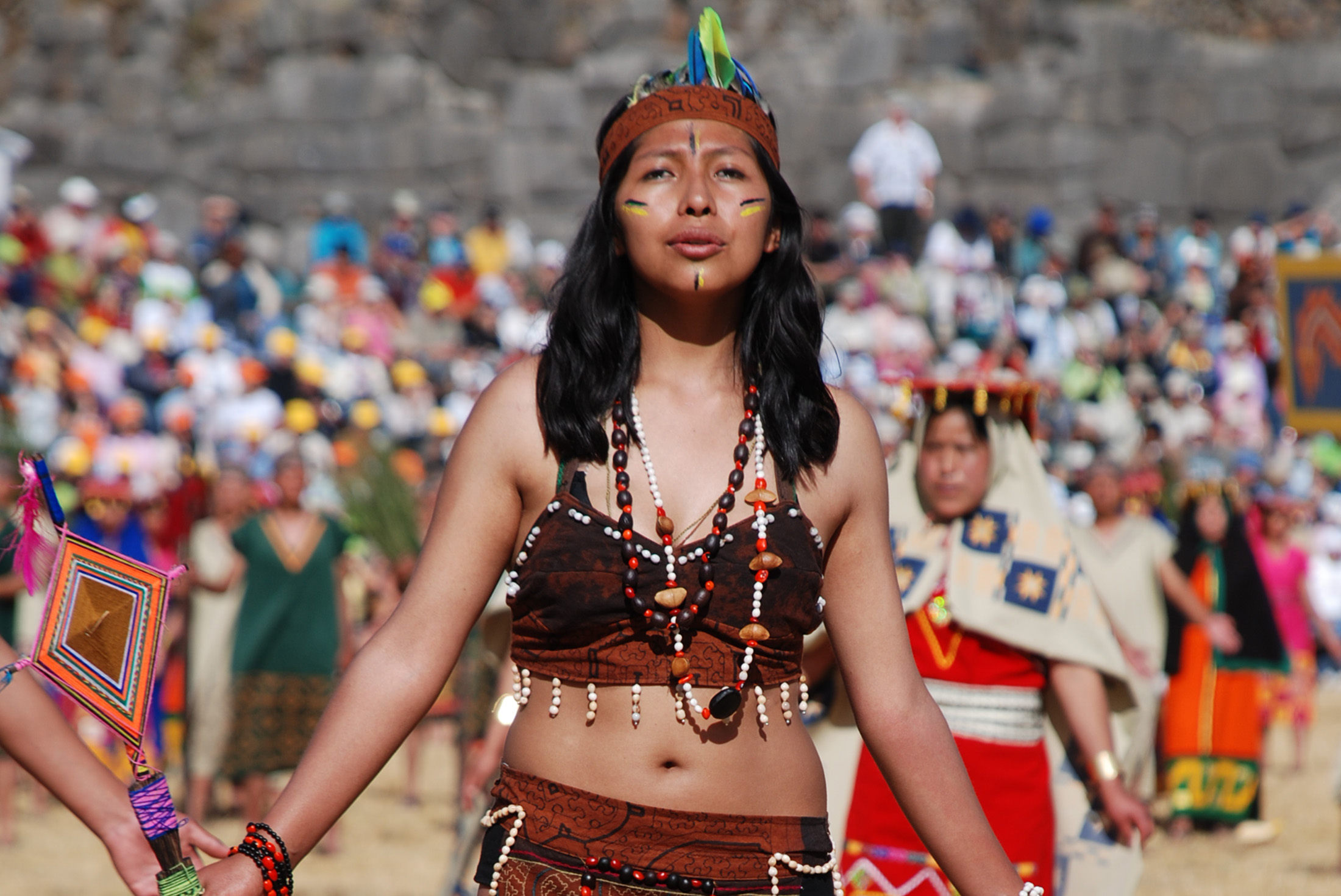 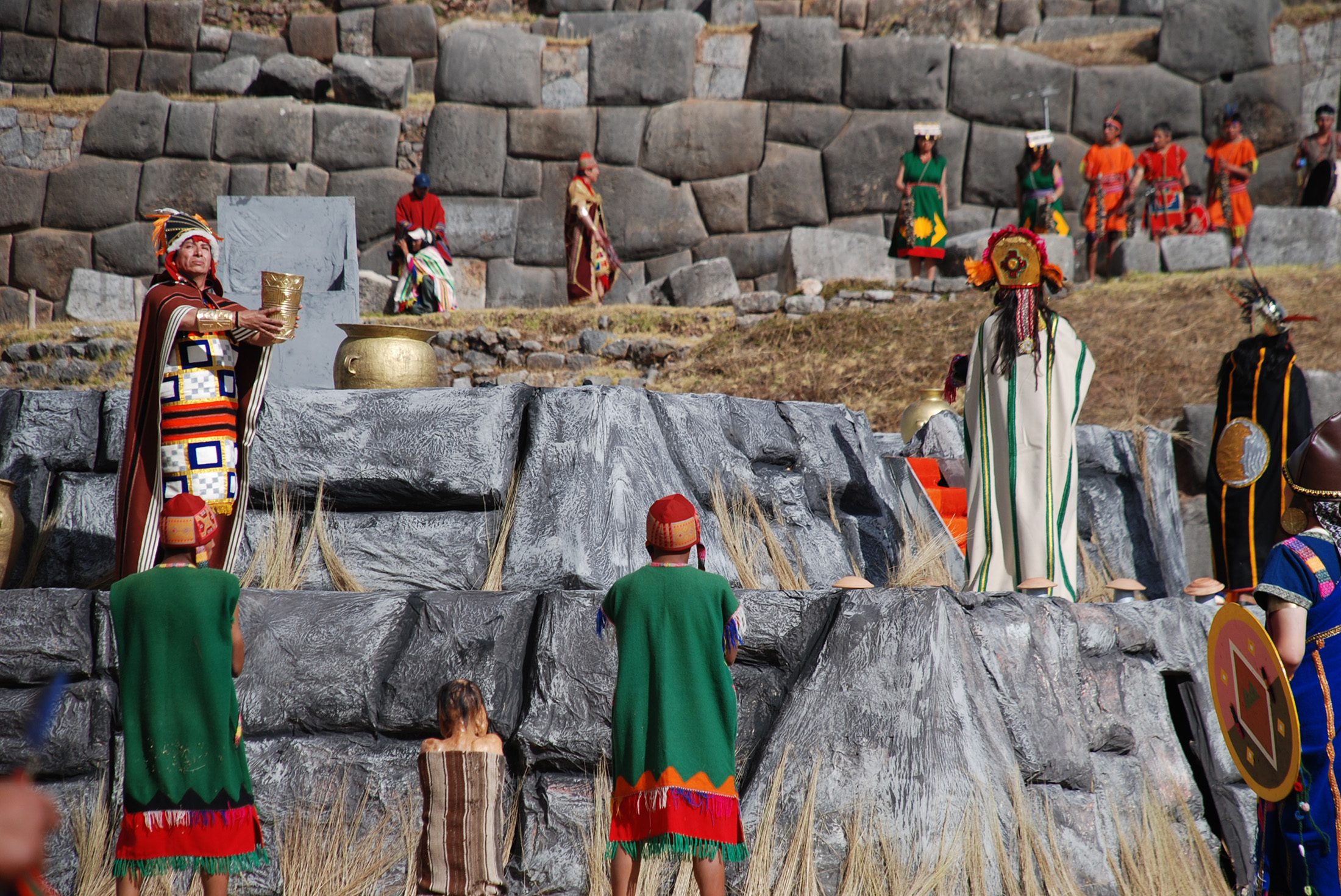 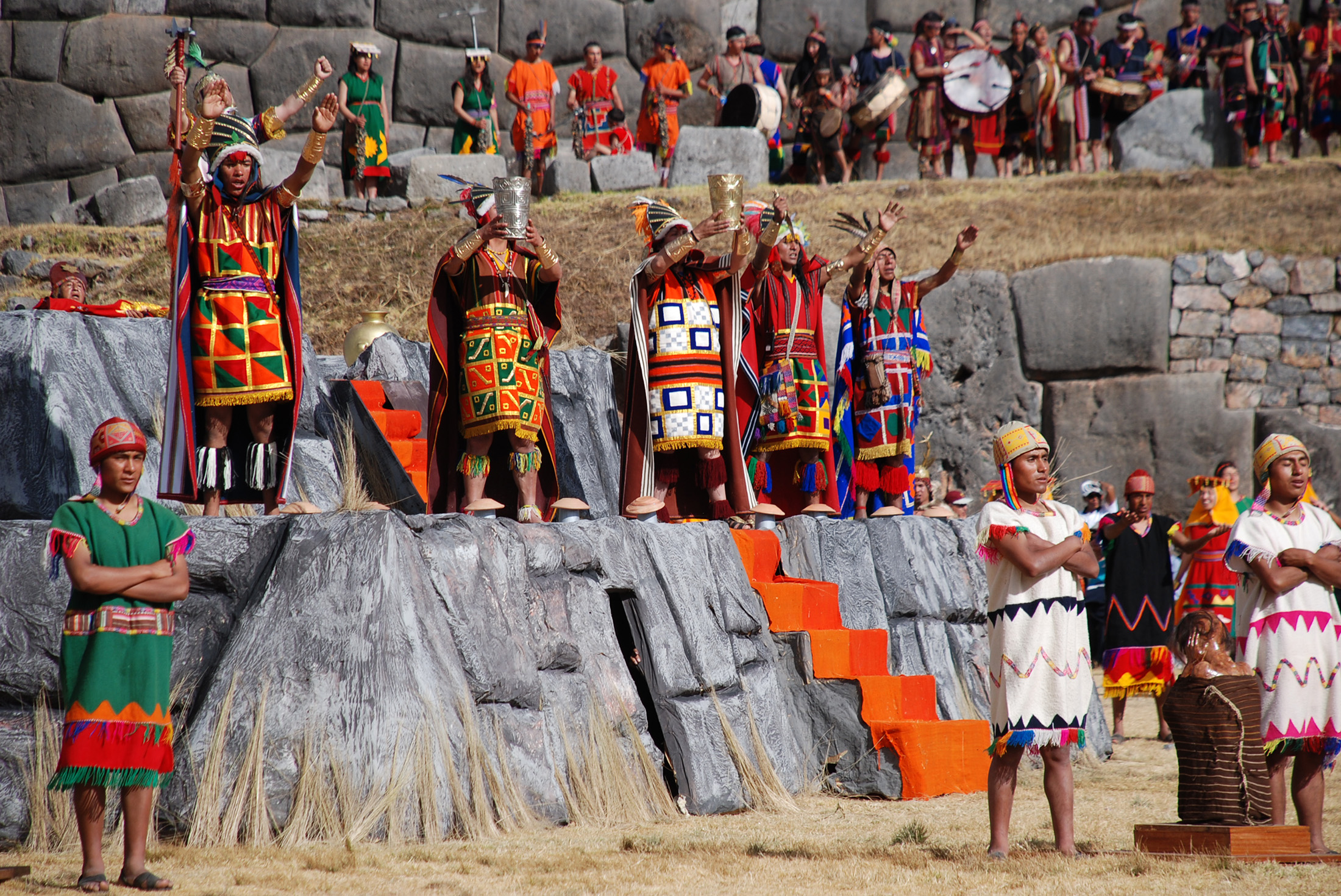 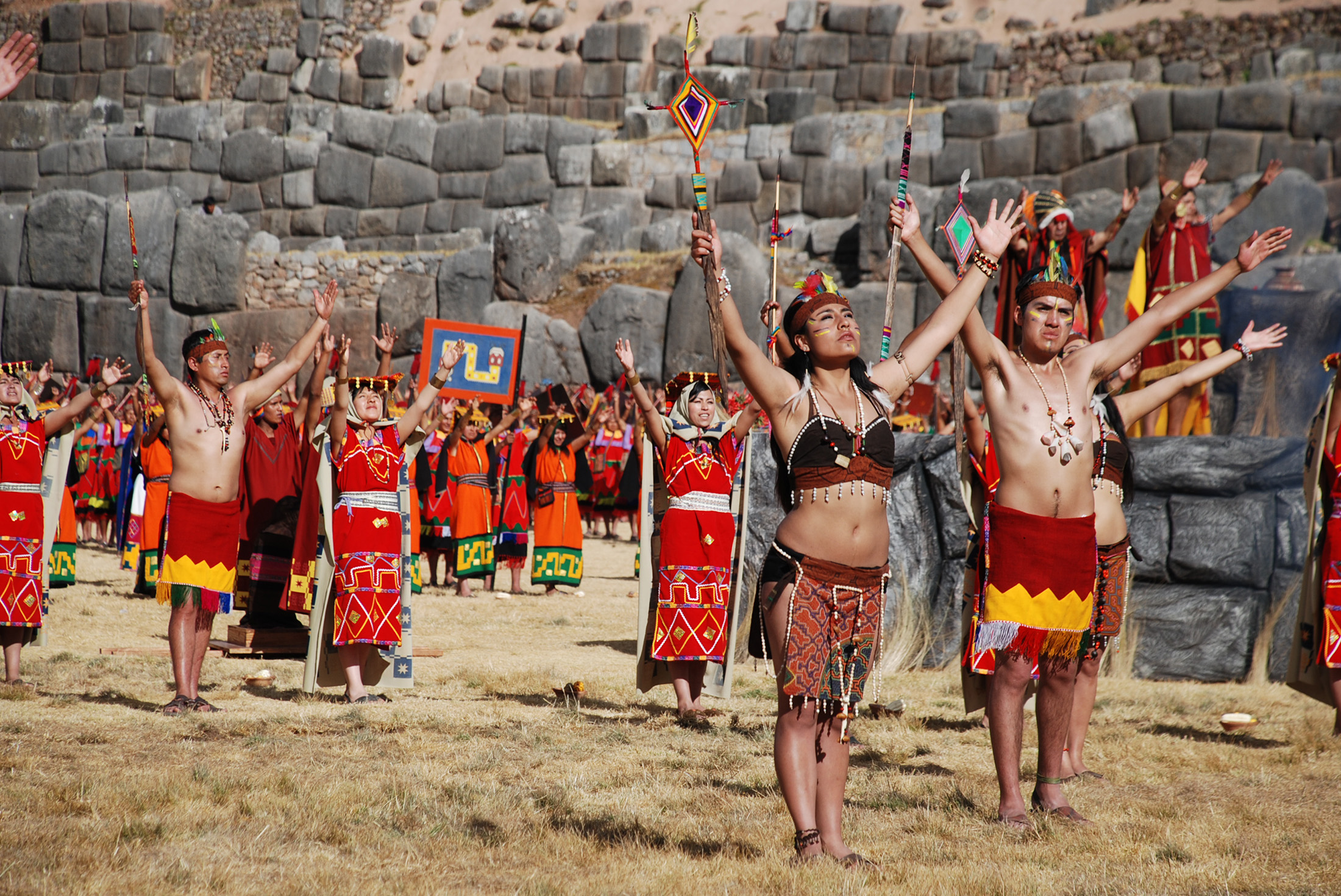 Hola and welcome to Lima, where the delights and personality of modern Peru jostle for attention amoung the remnants of ancient and colonial history. On arrival to Jorge Chavez International Airport you will be transferred to your hotel. In the afternoon there will be a short welcome meeting in the hotel (please check the lobby or with reception for the exact time and location), after which you will set out on a brief orientation tour of Miraflores. One of Lima’s more cosmopolitan and gourmand neighbourhoods, you might want to keep an eye out for restaurants to revisit in the evening. Later, perhaps get to know your fellow travellers while sampling Peru’s national dish, ceviche, which is raw fish marinated in lime juice, onions and spices (often served with hot peppers).

The ornate and grand sights of downtown Lima's historical centre await in a morning walking tour. See the baroque Cathedral of Lima, which houses the remains of Lima's founder, Francisco Pizarro. Then, visit the nearby San Francisco Monastery, which is famous for its catacombs containing nearly 70,000 human remains. Continue on to the Central Market, which is home to a huge variety of fresh produce, including fruits, vegetables and even guinea pigs. Next, head away from the gringo trail and visit ‘Alameda de Chabuca Granda,’ a place locals go to enjoy desserts such as ‘mazamorra morada’ (a sweet porridge made from purple corn), or ‘picarones’ (Peruvian donuts made from local squash called ‘macre’).

Head south to the coast. The journey will take approximately 3-4 hours, a great opportunity to get to know your leader and fellow passengers or simply enjoy the rugged country views. Arrive in Paracas and take an afternoon to explore at your leisure. Perhaps visit the Museo JC Tello, which houses a collection of weavings, ceramics, trophy heads and skulls belonging to the Paracas culture for which this town is named.

Rise early for a morning excursion to the Ballestas islands. Often referred to as the Galapagos of Peru, the islands are home to an abundance of wildlife, including pelicans, red-footed boobies, flamingos, sea lions and even penguins. You will have the opportunity to see wildlife up close on a boat tour of the area. Remember to keep an eye out for the famous three-pronged candelabra etched into the sandy hills. Later, travel by private van from Paracas to Nazca. This is a three-hour drive with the possibility of a stopover in the oasis town of Huacachina on the way. Nazca’s origins date back to the 200 BC, making it a treasure trove of textiles, ceramics, relics and mummies, which have been well preserved by the region’s dry desert conditions. Nazca is also famous for the mysterious Nazca Lines, a series of barely discernable paths etched into the desert, which, when viewed from above, come together to form giant symbols such as hummingbirds, spiders and trees. There are many theories about how and why the lines exist and who created them. Take the opportunity to visit a viewing platform to see the lines for yourself. Tonight enjoy an included 'pachamanca' meal, which is prepared using a traditional baking method over hot stones.

Despite being centuries old, the Nazca Lines were only discovered in 1939 after American scientist Paul Kosoko happened to fly over them during a routine ancient-irrigation research flight. This discovery helped Nazca grow from a barren desert town into a World Heritage-listed destination for inquisitive adventurers. Today you’ll follow in Kosoko’s footsteps with an included flight over the lines, which will reveal just how vast and well coordinated these desert carvings really are. Afterwards, hop aboard a private van headed to Arequipa (approximately 8-9 hours). Colonial Arequipa is an excellent place to while away the rest of the afternoon. Stretch your legs on a walk through the city’s white streets or grab a drink at a bar and admire the views of volcanic El Misti looming in the distance.

After breakfast head out on a walking tour of Arequipa. The city has earned itself a nickname as Peru’s ‘White City’ thanks to the distinctive volcanic stonework that is used extensively throughout its streets. The stately Arequipa Cathedral is a stunning example of how this material was used in constructing some of the city’s colonial architecture. Pay a visit to the Jesuit Iglesia de La Compania, which features an ornate facade and is home to the San Ignacio Chapel and its intricate cupola of angels, flowers and birds. Later, get lost in the colourful walkways and manicured courtyards of the Santa Catalina Nunnery, which was only opened up to the public in 1970 after decades of being shrouded in mystery.

Drive through Peru’s altiplano (high plains), passing spectacular woodlands, grazing llamas and stone cairns built by the local indigenous people, to the Colca Valley. More than twice as deep as the Grand Canyon, the Colca Canyon provides some breathtaking views and is a great place to spot Andean Condors. The pre-Inca terraces carved into the canyon’s walls are still cultivated today, and villages are dotted throughout the area. Keep an eye out for locals in colourful traditional dress selling goods by the roadside or walking their alpacas to market. Stop at the highest point of the valley (4910 metres) to enjoy views of the rugged landscape below and the snow-capped volcano of the Nevado Ampato in the distance. The height might leave you feeling a little short of breath, but after taking some photos you'll quickly descend to a lower altitude. Continue on to the town of Chivay, where there is some time to visit the local hot springs. In the evening there is the option to visit a local pena to enjoy a Peruvian dance and music show. Spend the night in Chivay.

Spot Andean Condors, one of the world's largest flying birds, at the Condor Viewpoint this morning. After lunch, board a private van headed to Puno (approximately 4 hours). The group will stop on the way and see the ruined 'chullpas' or funeral towers of Sillustani, which were built by a pre-Inca civilisation to house the remains of noble men. Arrive in Puno, which is located on the shores of Lake Titicaca, and is a veritable melting pot of Aymara and Quechuan Indian culture. The town is known as the folklore capital of Peru and is famous for its traditional dances. Wander the town’s cobbled streets and, if time allows, perhaps climb the many steps to the Mirador El Condor, which provides spectacular views over Puno and Lake Titicaca alongside an enormous condor sculpture.

Be enchanted by the tranquil scenery and silken waters of Lake Titicaca on a boat cruise around the world’s highest navigable lake. A word of caution however, the sun here can be extremely strong so be sure to wear a hat and sunscreen, even on cloudy days. After time on the water, stop by the floating Uros Islands. In ancient times, the Uros people constructed these islands to isolate themselves from rival tribes on the mainland and have lived on the water ever since. The islands are built completely from multiple layers of totora reeds, which grow in the shallows of the lake. After time to explore the floating villages, stop in at Taquile Island to see how local woollen handicrafts are made. Knitting on this island is strictly a male domain while women do the spinning. In the evening, retire to the private island of Suasi, which will be the groups’ base for the next two nights.

Visit the island’s cultural museum this morning and learn more about the history of Lake Titicaca and its communities. Visitors can see the varied handicrafts and fabrics created by the different groups that developed around the lake, as well as different types of Andean grains, such as quinoa, that formed part of their diet. Afterwards, navigate across the island in Canadian canoes, passing totora reeds and observing birdlife, such as Titicaca flightless grebes, Andean geese, black skimmers, Peruvian boobies and many species of gulls. You may even see all four species of camelids–llamas, alpacas, guanacos and rare vicunas–and adorable viscachas. An easy late-afternoon walk (approximately 1-2 hours) will take you to the highest point of the island–the perfect place to witness an unforgettable sunset over Lake Titicaca while enjoying a private picnic with drinks. This is a unique moment to soak in the beautiful landscape, appreciate the serenity, and if the clouds behave, watch the sun go down.

Backtrack across the lake to Puno and enjoy a free evening to explore this port town. Perhaps eat dinner at a local restaurant, play Jenga at the Kamizaraky Rock Pub, or simply relax in the hotel. Puno is often named as the folklore capital of Peru, with many lively and colourful festivals taking place throughout the year. Most of the major festivals are celebrated around Catholic feast days, particularly in January and February. If you're lucky your visit might coincide with an evening parade, when the streets are filled with costumed dancers and musicians.

Catch a local bus across the spectacular altiplano to the high-flying city of Cusco (approximately 6 hours). Cusco is South America's oldest continuously inhabited city, and was the home of the Incas for two centuries before the Spanish built their first capital here. Today, Cusco is a fascinating combination of both cultures and is proudly championed as the heart and soul of modern Peru. Inca-built walls line the central street and many of the city's colonial buildings are built on or around Inca foundations. The city is also the ideal place to acclimatise to the altitude (3450 metres, or 11,150 feet above sea level) before visiting the surrounding Sacred Valley and Machu Picchu. Perhaps take a wander and see the many Baroque churches and ancient temples dotted around town, or go on the hunt for chicharron (fried pork ribs) on Pampa del Castillo. 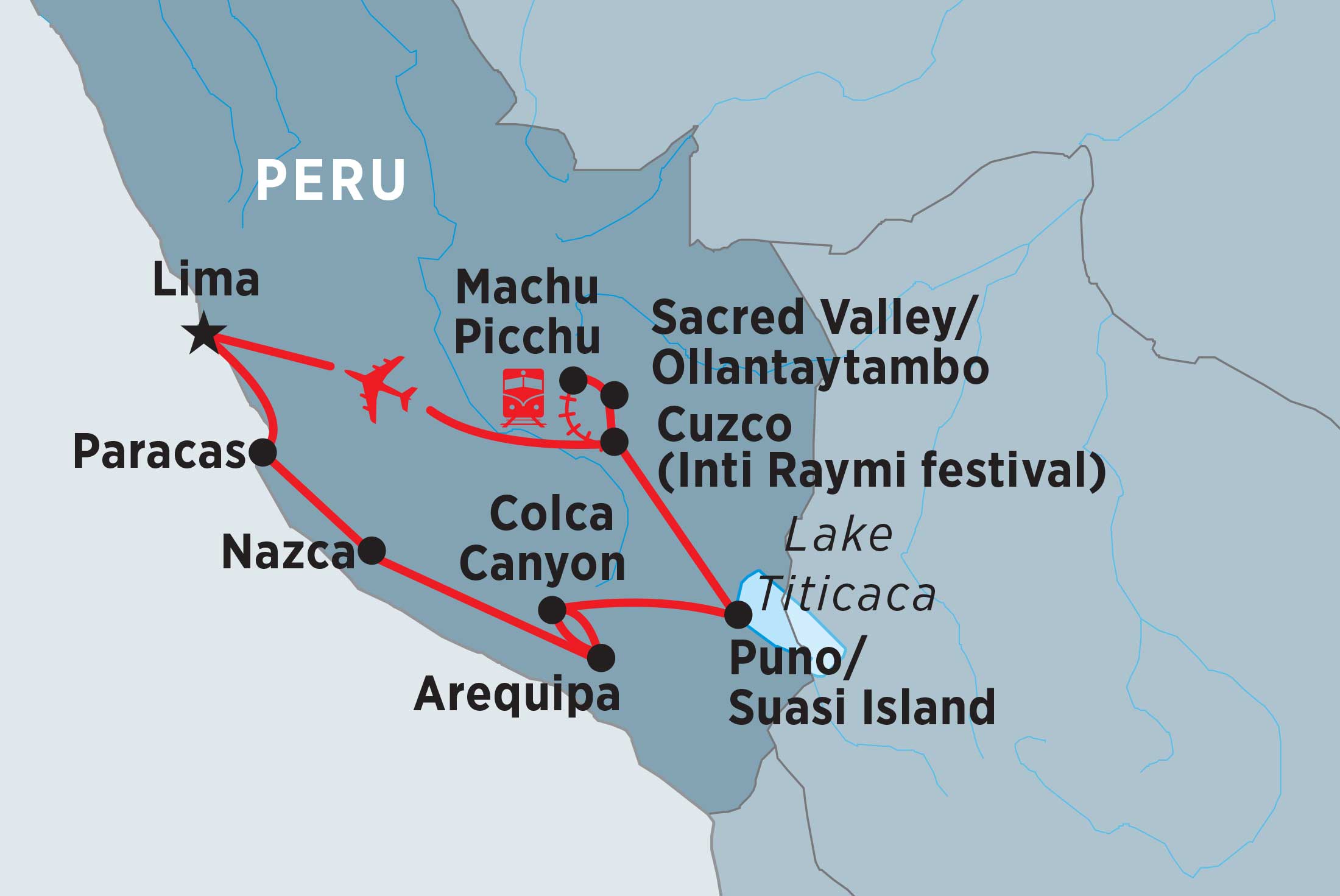