In Medellin, witness the elaborate displays of the Feria de Las Flores and experience the festive atmosphere of the ‘City of Eternal Spring’. Wander the historic heart of Bogota, Colombia’s cosmopolitan city filled with cafes, museums and old churches. Travel into the serene highlands of Colombia’s coffee country, discovering the secrets of the industry with a stay on a coffee estancia. From the World Heritage-listed Old Town to the maze of the colourful, chaotic Bazurto Market, discover how Cartagena is a place to feel as much as do

Like a green shoot emerging from the earth, Colombia has put its past as a no-go zone of Pablo Escobar and cartels behind it to blossom into one of South America’s most exciting up and coming destinations. Join Peregrine for a special trip that shows off the verdant side of this beautiful country, spending extended time in Medellin during its famed flower festival. Begin by discovering the colonial heart of Bogota, then travel into the heart of coffee country and Salento, before spending time on a coffee plantation in the lush Cocora Valley. Once notorious for a reputation built on the coca plant, Colombia has longer had renown as an exporter of live flowers. You will travel to Medellin, a centre of the trade, and see a flower festival held since 1957 – the Feria de Las Flores – and witness the spectacular parade of silleteros. Finish with the chance to embrace the Caribbean coast from the beautiful walled old town of Cartagena. This trip is the perfect chance to be a part of one of south America’s most unique and colourful festivals, as well as spend time with the locals that make Colombia one of the world’s friendliest countries. 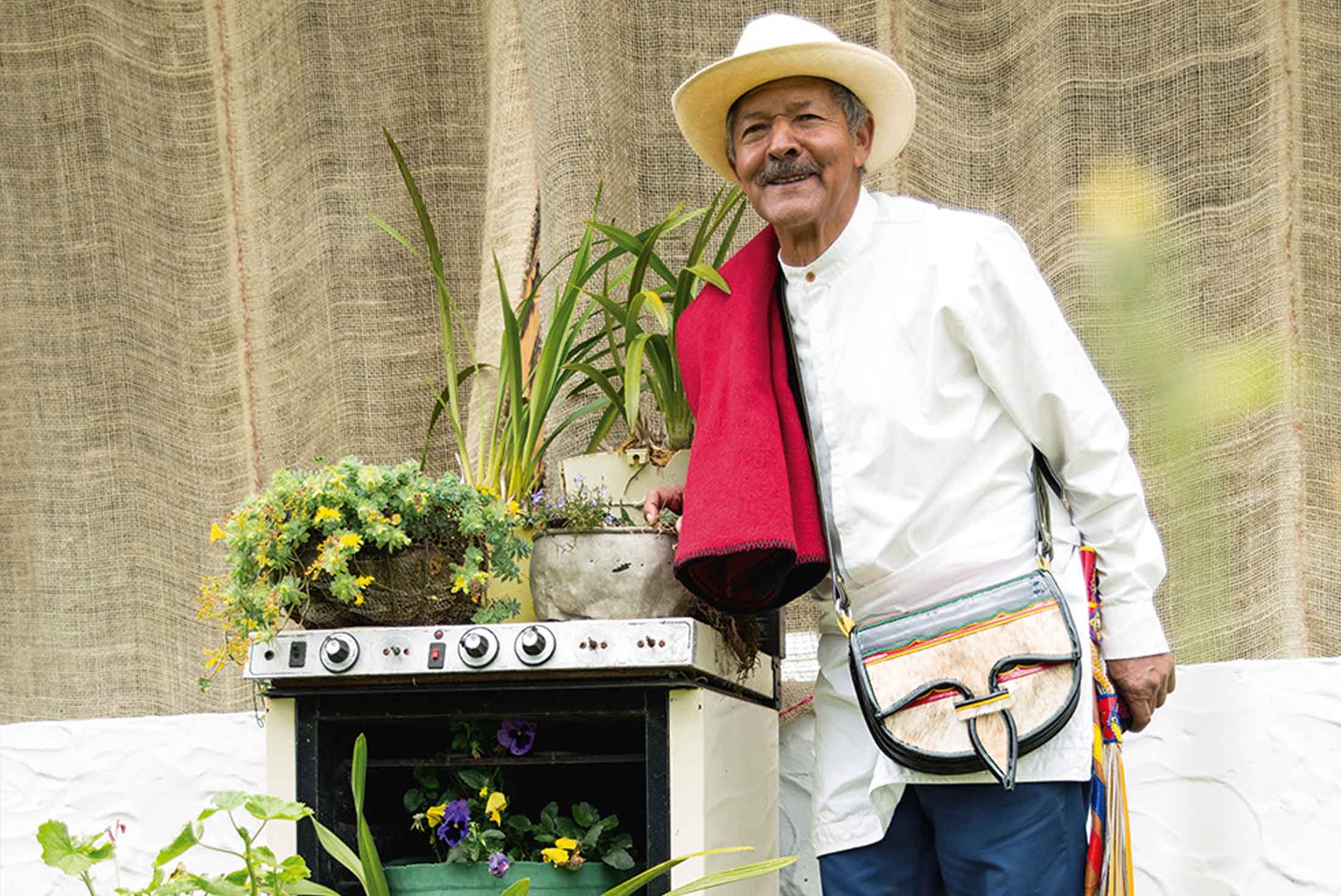 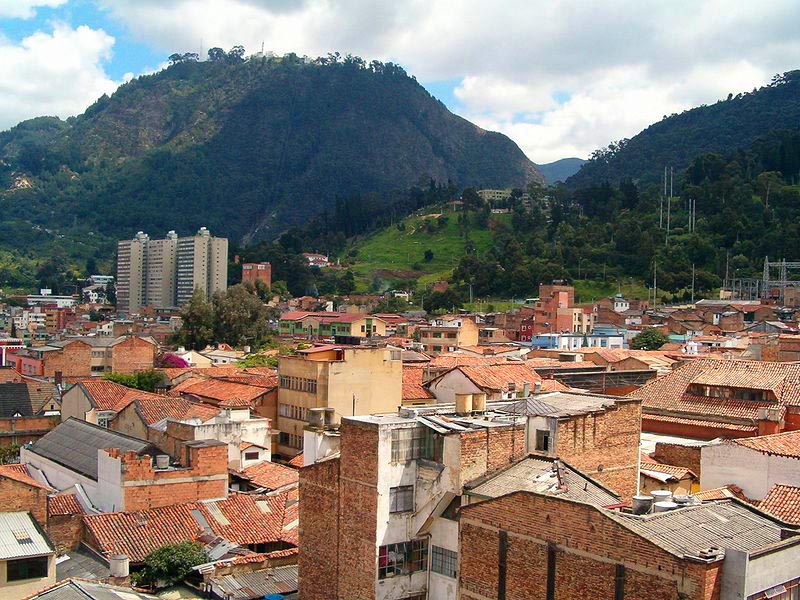 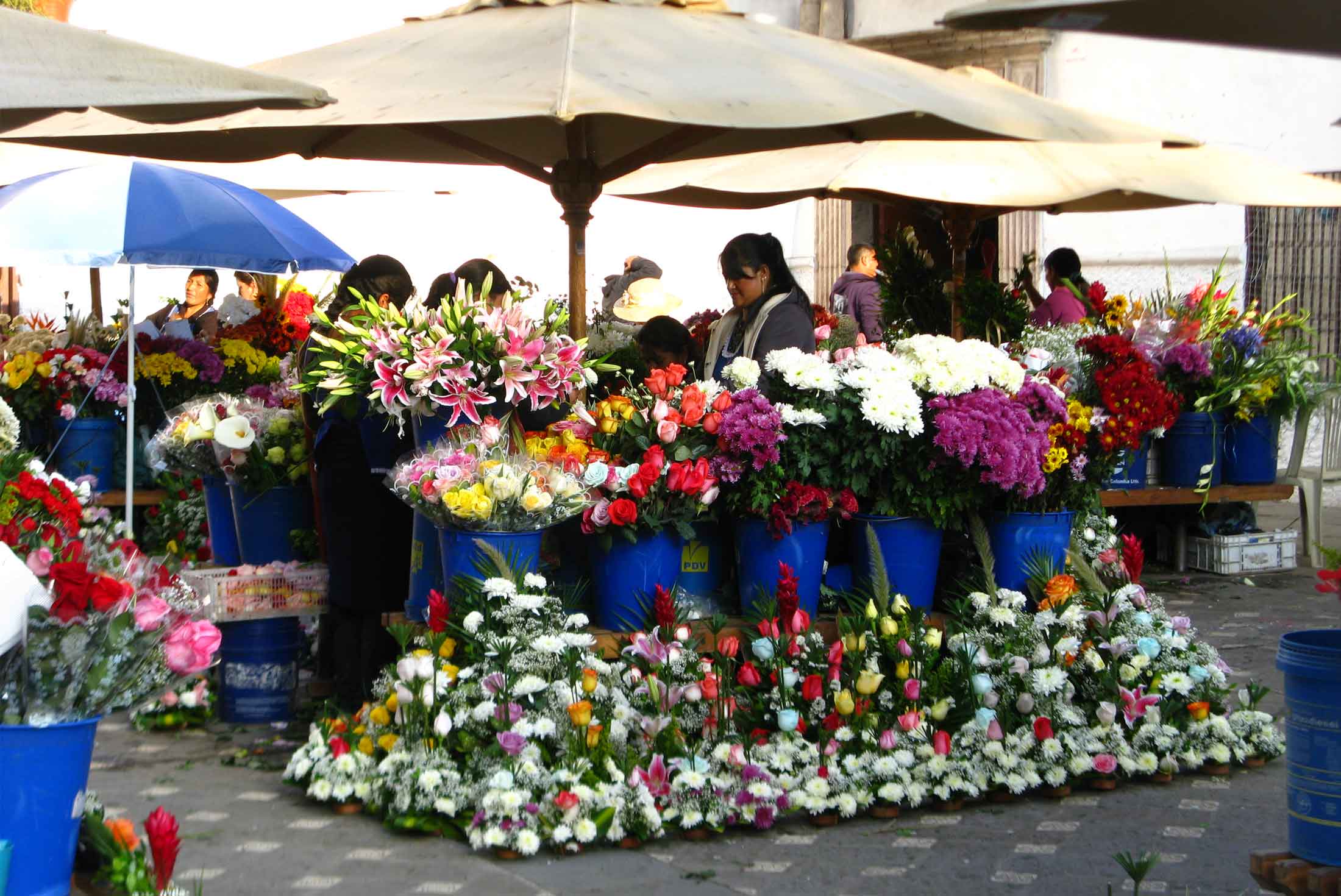 Bienvenidos! Welcome to Colombia. Your adventure begins with a welcome meeting at 2 pm, where you will meet your guide and fellow travel companions. Until that time you’re free to explore. Bogota rests among emerald, mist-shrouded mountains 2,640 metres above sea level and has over seven million inhabitants, making it one of the largest cities at altitude in the world. Perhaps get your first taste of the city with a meander through the colourful laneways of the city's historic heart, La Candelaria. A good way to get to know your new travel companions is by getting together for an optional dinner tonight.

Embark on a city tour of Bogota. This surprisingly cosmopolitan city has an abundance of cafes, museums and old churches, making it a delight to explore. Visit the Gold Museum and the Botero art museum. You will also have time to explore on your own – perhaps ride up the gondola on Cerro de Monserrate to see the 17th century church that looks out over the expansive metropolis below, or visit the Museo Nacional, a good option if you're interested in learning about life in Colombia before and after the Spanish conquest.

Today you will visit Paloquemao Market before taking a short flight west to Armenia – the gateway to Colombia’s coffee zone – and transfer to the beautiful village of Salento. Take the time to appreciate rural Colombia – stroll through the colourful streets, enjoy the breathtaking mountain views, and admire the colours of 'paisa' architecture at its best. Be sure to sample some of the local food, with trout the regional speciality. There are many different ways to prepare and enjoy it, but it is most commonly served in a rich garlic and cheese sauce.

Begin the day by taking a jeep out to the magnificent Cocora Valley, where you’ll experience the magic of the giant wax palm (Colombia’s national tree). You will spend the morning walking among the region's incredible scenery and, if you're feeling active, there will be time to hike up to Acaime Reserve where colourful hummingbirds come to feed. The hike to Acaime (approximately 5 hours) is quite strenuous, with some steep and slippery sections, so you'll need good walking shoes, as well as plenty of water and snacks. If you'd rather be more relaxed, you can explore the valley as you please, then take a jeep back to town. In the afternoon, travel deep into Colombia’s remote and beautiful coffee region for a two-night stay in a traditional coffee estancia. Here you’ll have the unique opportunity to learn first hand about the world’s most popular bean.

Thanks to its tropical altitude and fertile volcanic soil, Colombia is one of the world’s largest coffee producers. You will find out more about the bean on a guided tour of the coffee plantation and processing centre. Dig into the history of the plant, learning the inside story of the industry that's long buoyed the country's economy. See how the beans are grown and harvested, processed, dried, roasted and ground, and then enjoy sampling then for yourself. Try different types of coffee grains and get a lesson on preparing different types of coffees, finishing off with a freshly brewed cup. Afterwards, relax amid the estancia's beautiful surrounds of sloping green hills and valleys.

Today you will transfer (approximately 6 hours) to Medellin. Having spent the 1980s and 90s with an international reputation as one of the world's most dangerous cities (thanks to Pablo Escobar's infamous drug cartel), Medellin has turned itself around to become one of the most exciting cities in South America. With some of the country's finest museums, parks and architecture (as well as a much safer and comfortable atmosphere) it's easy to see why its popularity is increasing. Look out for some Antioquian staples to try for dinner – mondongo, a tripe stew, or bandeja paisa, a plate full of beans, rice, chorizo and more.

Today you’ll take an orientation walk of this beautiful “city of eternal spring” with your leader. Along the way you’ll see how social politics, buildings and constructions have transformed the city into a model metropolis, and learn a little more about the town's interesting recent history. You will also make a visit to the beautiful botanical garden (Jardin Botanico de Medellin), a 14-hectare green retreat in the city. You can join your leader in a walk around, or spend as much time here as you wish. The garden is home to a number of different habitats, birds, wandering iguanas, butterflies and fish, as well as a vast greenhouse filled with orchids. This evening perhaps stop by one of the city’s numerous energetic salsa bars, or follow the designer set to the chic nightlife of Parque de Lleras.

While Medellin gained a notorious reputation built on the coca plant, for longer it’s actually had fame for other types of flora – specifically flowers. Colombia is the second largest exporter of live flowers in the world after Holland, and Medellin is a centre of the trade. Since 1957 the city has held a festival that celebrates this – the Feria de Las Flores. Since the end of the control of the cartels, the city has turned the festival into a major cultural event. There are numerous events on during the festival, including music, dancing, and fireworks, but the major drawcard is the parade of silleteros. This is where flower farmers and local people parade enormous flower arrangements on their backs through the streets. The silleteros are large wooden disks strapped to the back, once used to carry the sick from St Elena (a beautiful town just east of Medellin nestled up in the side of the mountains) down to Medellin, and also reportedly by slaves to carry the wealthy up to the mountains of Antioquia. They were then repurposed to carry flowers down to market and now used to feature elaborate floral displays for the parade. You’ll get an entrance ticket to the one of a kind 3-4 hour Desfile de Silleteros (flower parade) and witness the 500 or so silleteros carry their stunning displays.

This morning starts at about 9am. Explore another side to the city with a Pablo Escobar focused tour. Take a tour around his old haunts and hear the story of Colombia's most infamous drug kingpin and the wealthiest criminal in history – at his cartel’s peak, Escobar was bringing in $240 million a week. During the tour some of the places visited include the main Escobar residence, the cemetery in which Pablo Escobar is buried and the very place where his life came to end. The tour will finish around lunch time. The remainder of the day is free to explore.

Take a free day to enjoy some of the hundreds of cultural events and activities on offer around the festival. In recent years there have been nocturnal concerts in the cultural park, classic car and horse parades, dance performances, theatre, concerts by some of Colombia’s favourite artists, special markets and more. Your leader can help with organising tickets to any events that need booking. Outside of the festival you can visit the Museo de Antioquia to see some of Botero and Picasso’s famous works, stroll the verdant public parks, or visit the old steel mill that has been transformed into the beautiful Museo de Arte Moderno. Whatever you choose, be sure to soak up the unique festive atmosphere that envelops the city.

Enjoy another day to take in the festivals events. You might also choose to travel outside of Medellin to explore the nearby charming old town of Santa Fe de Antioquia. This 16th-century township has maintained much of its colonial-era charm, its narrow streets and leafy central plazas providing plenty of places to relax away from the midday heat. The Bridge of the West, Metropolitan Cathedral and House of Two Palms are certain to impress, and the plaza is also home to a daily market where vendors sell various varieties of locally-grown Tamarind products.

Today you will fly from Medellin to Cartagena (approximately 1 hour). Cartagena is one of South America's most historic cities. This town, founded in 1533 by Spaniard Don Pedro de Heredia, was a major centre of early Spanish settlement in the Americas. Its gold and silver exports made it a popular target for pirates, and its spectacular walled fort (now on UNESCO's World Heritage list) was built to protect both shipping and the slave trade. You’ll join your leader for a short orientation walk in the area surrounding your accommodation. Afterwards, perhaps take some time to explore the old city, walking along the fortified walls next to the Caribbean. Enter the centro historico (the inner walled town), which is filled with beautiful churches, monasteries, plazas and antique mansions. Cartagena also has famously late-night nightlife for those interested too. 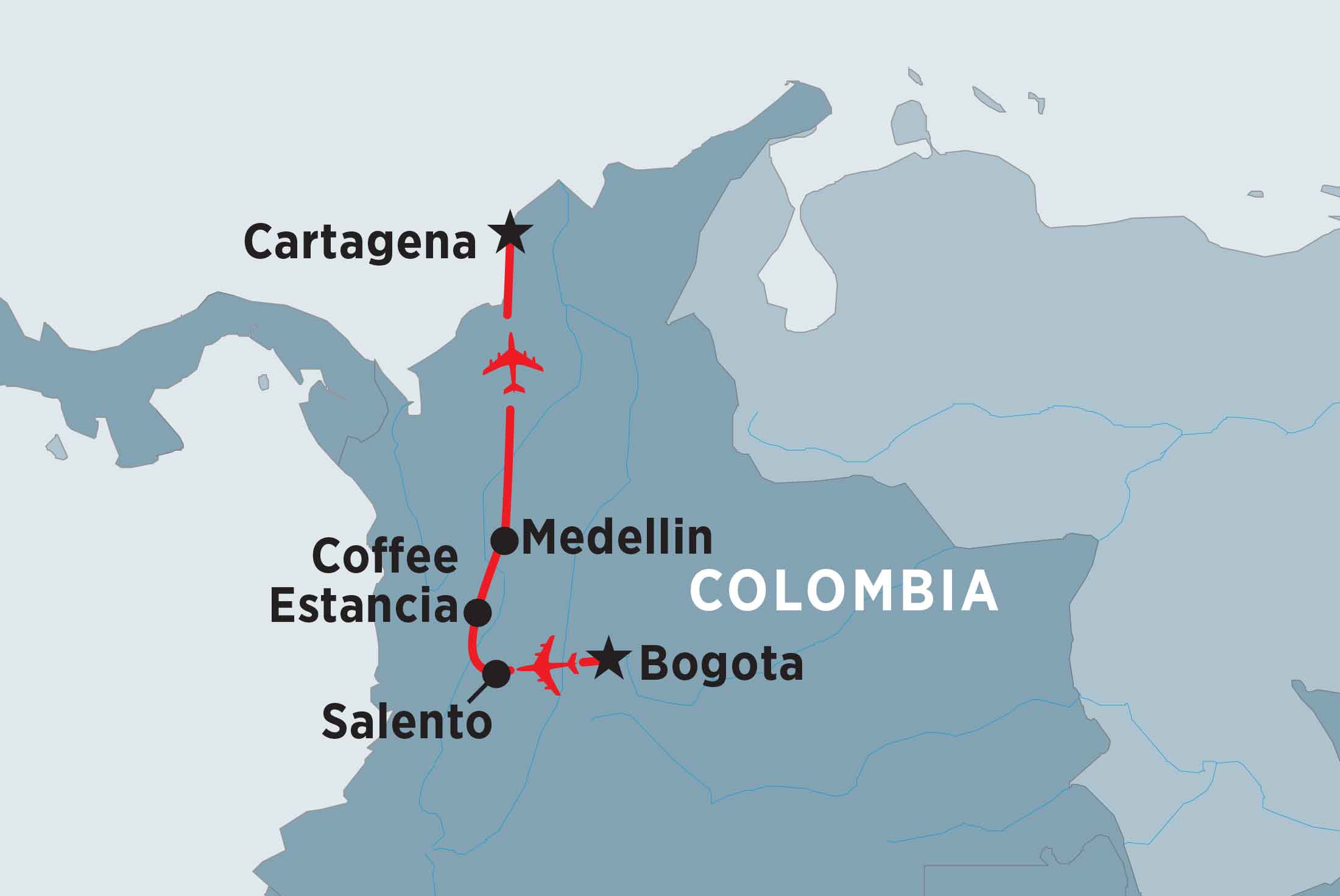