Enjoy a unique festive season in the Holy Land, a time when streets are bright with Christmas lights, parades and impromptu concerts. Experience Midnight Mass in the place where it all began – the Church of Nativity in Bethelehem. The atmosphere of reverence and joy will stay with you forever. Try a Christmas menu with a twist and sample some of the world’s greatest falafel in the centre of Bethlehem. The viscous, salty waters of the Dead Sea are shrinking due to a combination of evaporation and other factors – don’t miss the opportunity to float in this healing saline lake

Spend the festive season of a lifetime in the Holy Land of Israel and the Palestinian Territories on this 8-day journey. Explore the ancient sites of Tel Aviv, Jerusalem and Nazareth and join pilgrims for the annual Christmas day procession to Bethlehem, then partake in an atmospheric Midnight Mass at the site where Christians believe Jesus was born. Explore a region alive with history during a time of great celebration, and gain a new perspective on the season. 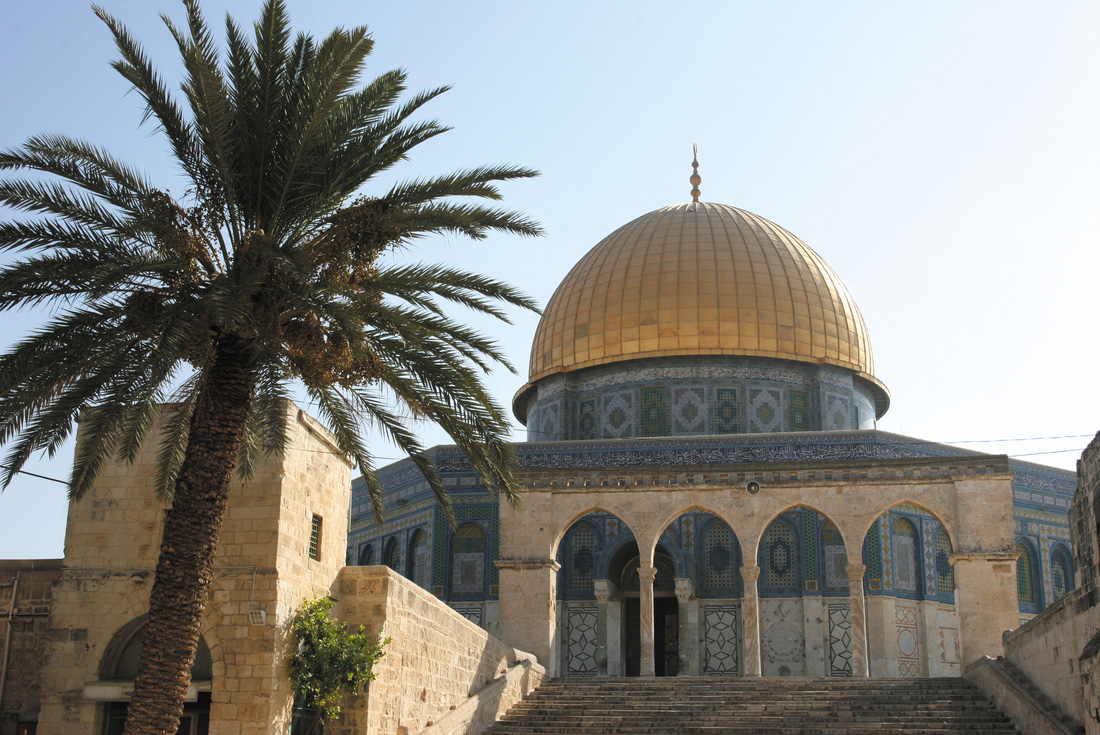 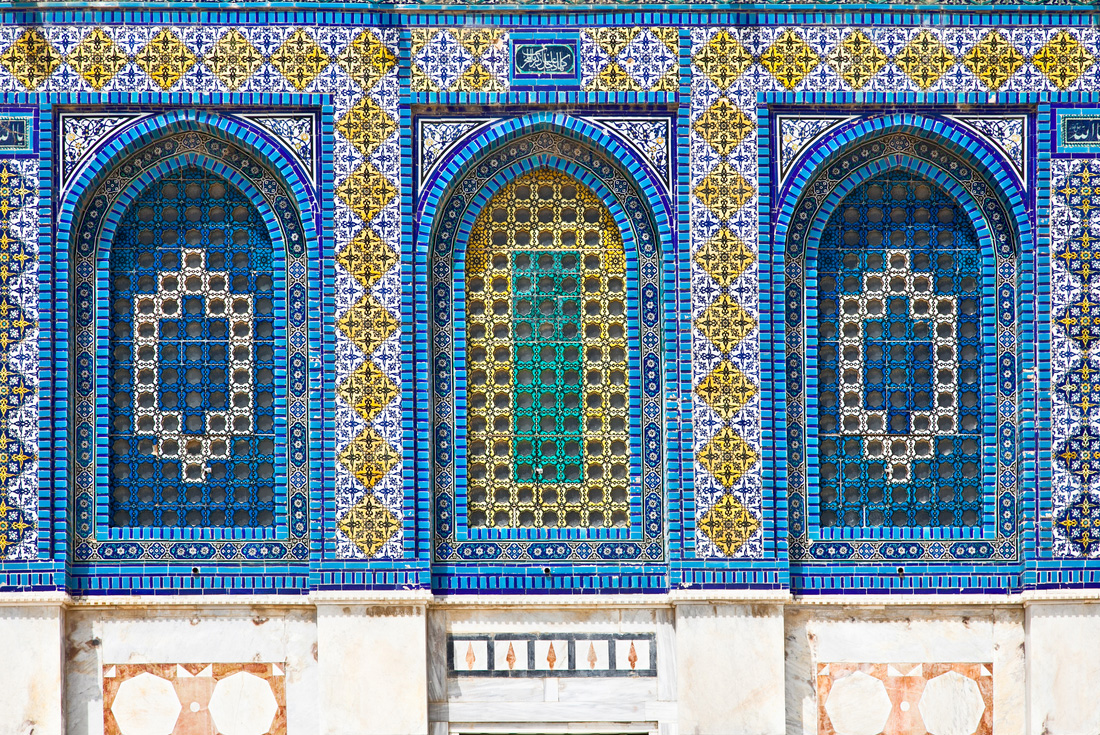 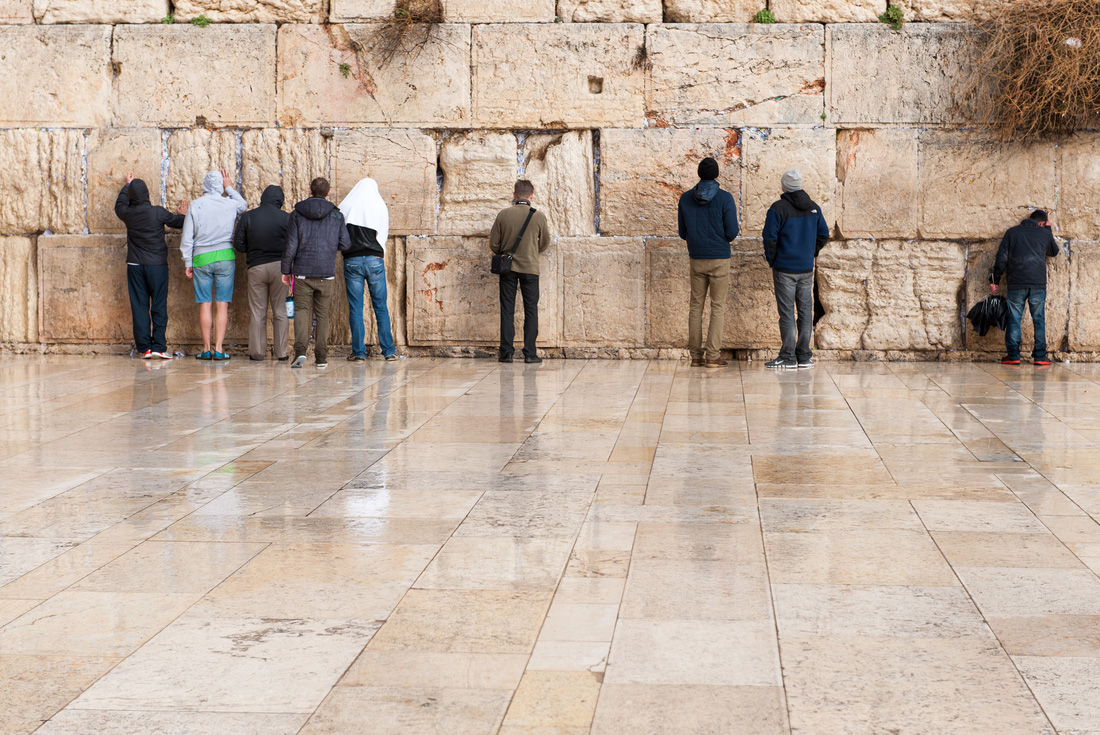 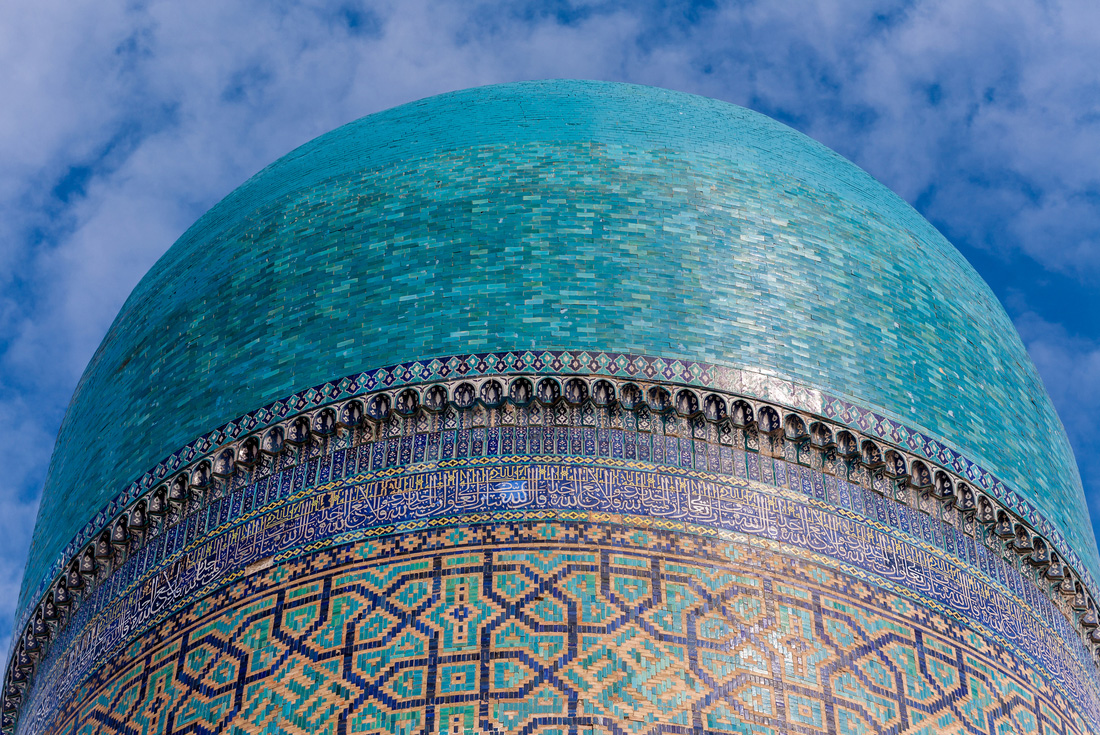 With its lively cafe culture, relaxed Mediterranean beaches and rich in Abrahamic history, Tel Aviv is the perfect place to begin the festive season. This Christmas celebration in the Holy Land officially begins at 1 pm with a welcome meeting at the hotel. Please be sure to have your insurance and next of kin details on hand to pass on at this meeting. If you can’t arrange a flight that will arrive in time for the meeting, consider organising one that lands a day or two early. Following the formalities, it’s time to begin exploring Tel Aviv’s ancient city of Jaffa. It was from the city’s port that Jonah is said to have fled in defiance of God’s wishes, and Jaffa is closely associated with many other biblical figures. Visit St Peter’s Church, twice destroyed and rebuilt in red-brick. Stroll through the ramshackle but charming Jaffa Flea Market, traversing narrow alleyways richly decorated for the season. Keep an eye out for one-off gifts for family and friends back home. Many locals swear the best hummus in Israel is made by the descendants of Abu Hassan, and the family run three hummus shops in Jaffa. If all the walking has roused your appetite, perhaps join the group for a hummus tasting at one of these institutions. Be sure to save some room for tonight’s optional welcome dinner.

Rise and shine for a day full of historic sightseeing. Begin in Caesarea, the capital of Israel during the Roman and Byzantine eras. This once great port town was built by King Herod around 25 BC. Its theatres, hippodrome, palace, Roman temple and extensive network of aqueducts – once lost under the desert sands – were excavated in the 1950s and their splendour is on show once again. Spend some time exploring here and then travel to Haifa and to visit the sculpted Bahai Gardens, which are perched on the Mount Carmel mountain range. Stop for lunch at a Druze restaurant, then continue to Akko. Visit the vast complex of buildings occupied by the Knights of St John (Knights Hospitaller), excavated to uncover rooms such as a dungeon, a dining room and the crypt of an ancient Gothic church. See also the secret tunnel of their rivals, the Knights Templar – an underground passage between their fortresses. Finally, press on to Nazareth, where you may spend the evening as your please in a city decorated handsomely for the season.

Begin the day with a visit to the Church of the Annunciation, a two-storey basilica set over the cave where the Bible says the Virgin Mary received news of the Immaculate Conception. Travel to Tiberias, and (weather permitting) take a boat ride across the calm waters of the Sea of Galilee. Continue to Tabgha, the site where it is believed Jesus fed a crowd 5000 with five loaves of bread and two fish. The aptly-named Church of the Multiplication of Loaves and Fishes was built to commemorate the miracle in 1984, though shrines in various forms have existed on the site since AD380. A short way up the lakeshore is Capernaum, where you can see another church named for St Peter, this one said to have been built over the foundations of the apostle’s home. Enjoy a traditional fish lunch before travelling to Bethlehem. The biblical birthplace of Jesus, the city positively hums with spirituality, particularly at this time of year. Visit Manger Square, a pedestrian only zone and the religious heart of the city. Marvel at the giant Christmas tree that dominates the square and perhaps take a wander to soak up the palpable feeling of anticipation throughout the city.

After an early breakfast, dive into a city alive will festivity, joining pilgrims for the annual Christmas procession, a parade of joy and colour. Follow scouts dressed in red berets as they march with bagpipes blaring, guiding the Latin Patriarch of Jerusalem on his journey from Jerusalem to the Church of Nativity. His entry to the city officially marks the beginning of the Christmas celebrations. In the afternoon, enjoy free time to soak up the atmosphere, taking in the life-sized biblical scenes, dancing and music. Following a hearty Christmas dinner, re-join the crowd for a poignant Midnight Mass. View the service on giant screens in Manger Square from a crowd of the faithful. Speak to your travel agent or Peregrine representative about the possibility of booking tickets in advance for the opportunity to attend Mass inside the Church of Nativity itself.

Merry Christmas! Ease into the day with a few hours of free time. Later, travel the short distance to Battir Village, a small town set in a verdant valley. Explore the Old Town, also known as the Seven Widows Quarter, on a guided tour. After a local lunch, take a short hike throughout the fertile valley. Continue to Jerusalem’s Old City, approaching from the hills and getting spectacular views of the Holy City from the Mount of Olives. Visit the Garden of Gethsemane, where the gnarled olive trees are some of the oldest in the world. It is here that Jesus is said to have prayed and accepted the imminence of his betrayal while his disciples slept.

Take a guided tour along the “way of sorrows”, which follows the biblical path of Jesus to the crucifixion. Begin at the narrow stone arch of St. Stephen’s Gate (aka the Lion’s Gate) and walk by the austere, medieval church of St. Anne, arriving at the Pool of Bethesda. Now located in the Muslim Quarter of Jerusalem, this pool was mentioned in the Gospel of John and is strongly associated with healing. Finally, see the stone-cut Church of the Holy Sepulchre, built where Jesus is believed to have been crucified and buried before rising after three days. Walk along the ‘Cardo’ in the recently restored Jewish Quarter, which was a road that ran the entire length of the city in Byzantine times. Visit the Wailing Wall. Here you can run your hands over the remains of the Temple Mount, where written prayers are slid into the cracks between stones. The rest of the afternoon is free for you to wander the city further, or perhaps find a café to sit in while you reflect. If you have the energy, you may wish to explore the many stairwells and archways of the historic neighbourhood of Yemin Moshe in the west. If a morning of intense sightseeing has left you feeling drained, maybe watch the world go by at one of the many laneway bars in Machane Yehuda Market.

Drive to Masada via the biblical town of Ma'aleh Adumim and the Inn of the Good Samaritan in the Judean Desert. The Inn of the Good Samaritan is a museum located near the site of the inn mentioned in the New Testament's parable of the Good Samaritan, and it displays mosaics and artefacts discovered throughout Israel. Arrive in Masada and take a cable car to discover the spectacular cliff-top fortress built by King Herod around 35BC. This World Heritage site is of great importance in the Jewish faith, a symbol of the exile of the Jewish people from the Holy Land. Afterwards, drive to an archaeological site on the West Bank, about a mile from the north shore of the Dead Sea. Major discoveries have been made here in Qumran, not the least of which is the Dead Sea Scrolls. Here you will also have a chance to float in the salty, viscous waters of the Dead Sea. Continue up the shore to the town of Jericho. Discover this slow-paced town in the West Bank where people have lived for 11,000 years. On a drive around the city see the Mount of Temptations (where Jesus was tempted by the devil) and a Sycamore Tree mentioned in the Gospel of Luke. Return to Jerusalem for your final night.

Your festive season in the Holy Land comes to an end after breakfast today. You may depart your accommodation at any time after you check out. 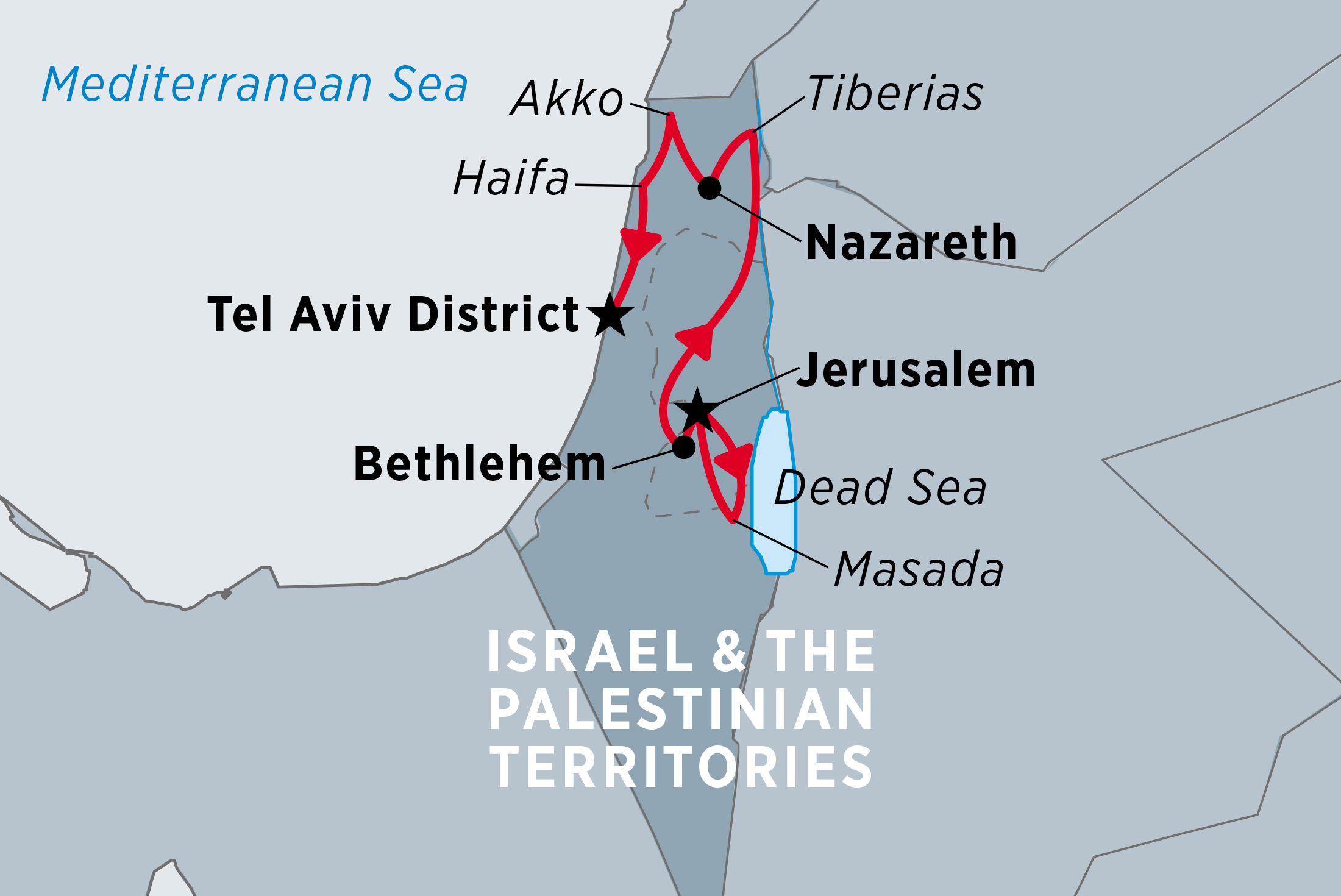