Enjoy a 2-night Feature Stay in Vancouver at an aboriginal-owned and themed hotel and learn about the First Nations history of the city on a walking tour of Stanley Park with a First Nations guide. Explore the Rockies the way the early fur traders did, with a canoe trip around McGillivray Lake followed by a four-course meal of the type the fur traders would typically have enjoyed. There are plenty of wildlife-spotting opportunities on this trip, including a river boat tour searching for bears, and a half day wildlife tour in Jasper looking for bears, elk, moose, coyotes and wolves . Enjoy a buffet breakfast at the famous Fairmont Lake Louise before free time to explore this stunning turquoise lake, either by foot or canoe

The Rocky Mountains of Canada offer spectacular landscapes of speckled white peaks, brilliant clear lakes, bear-filled forests and tranquil rivers. Stroll the streets of Vancouver, hike the flower-lined alpine trails of Sun Peaks, explore the great valleys and canyons of Jasper and Banff national parks, canoe across the vivid blue of Lake Louise, uncover dinosaur fossils in the Alberta badlands and ponder the age-old secrets of Native American hunting outside Calgary. This special new itinerary delivers the best of what this stunning mountain range has to offer. 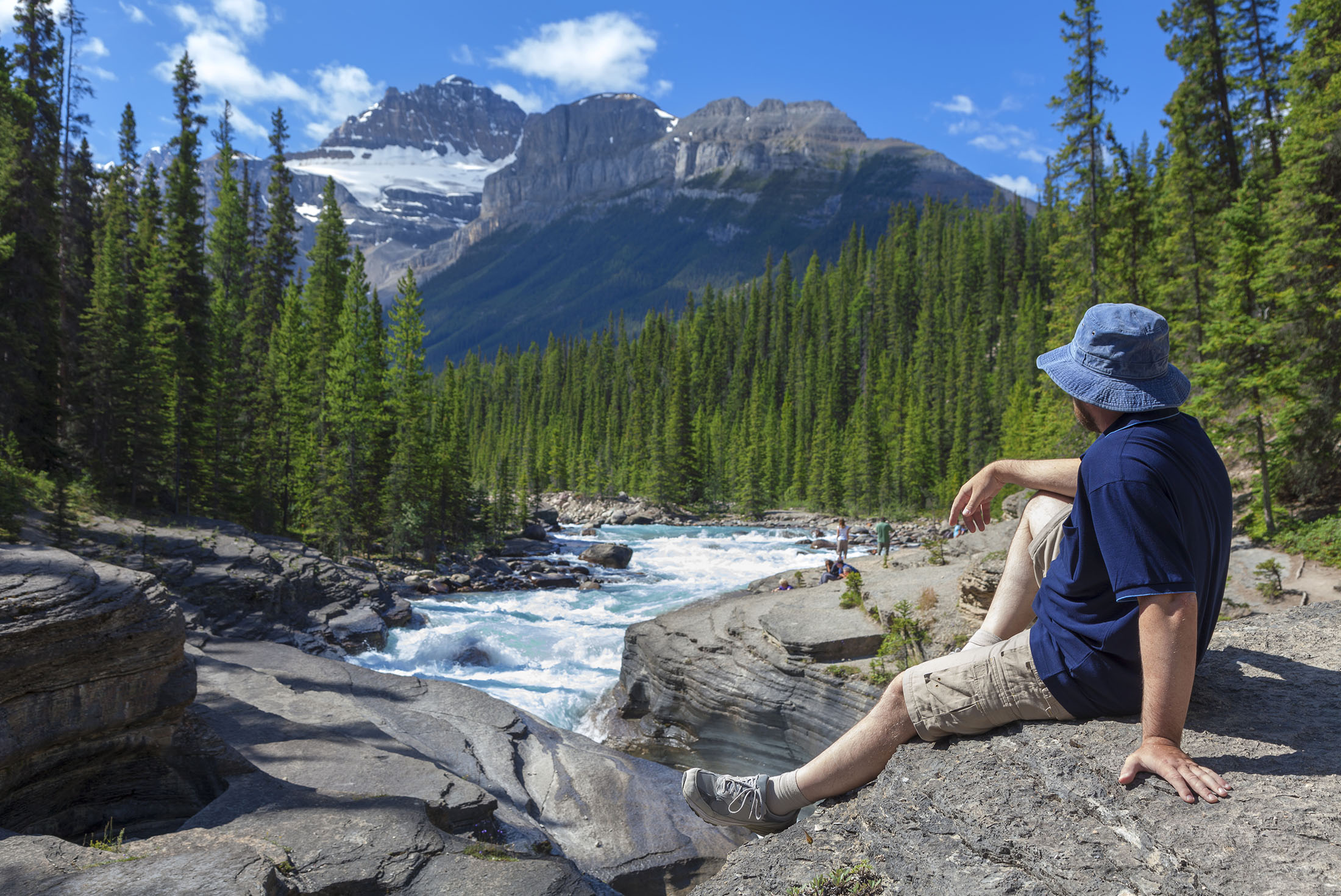 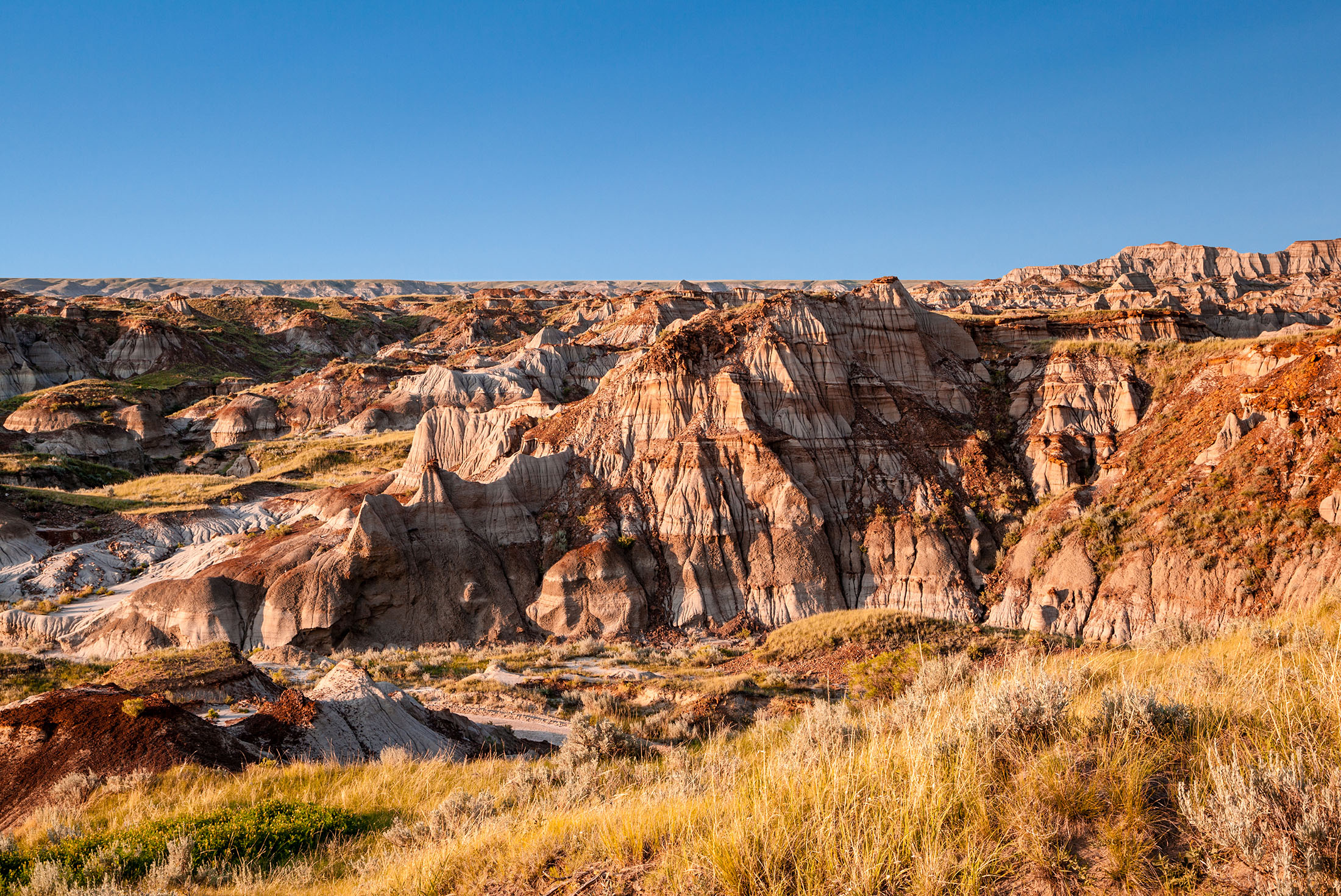 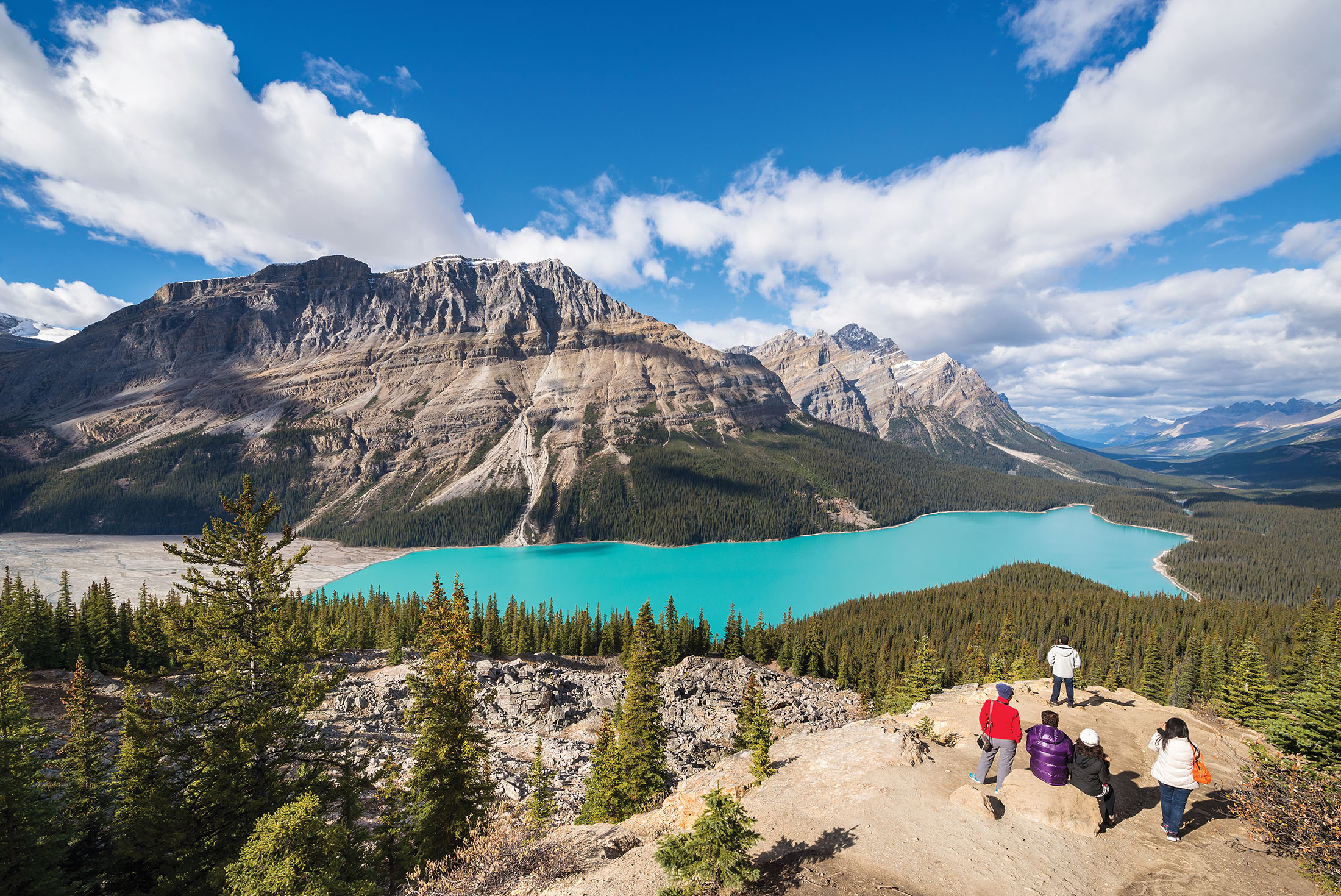 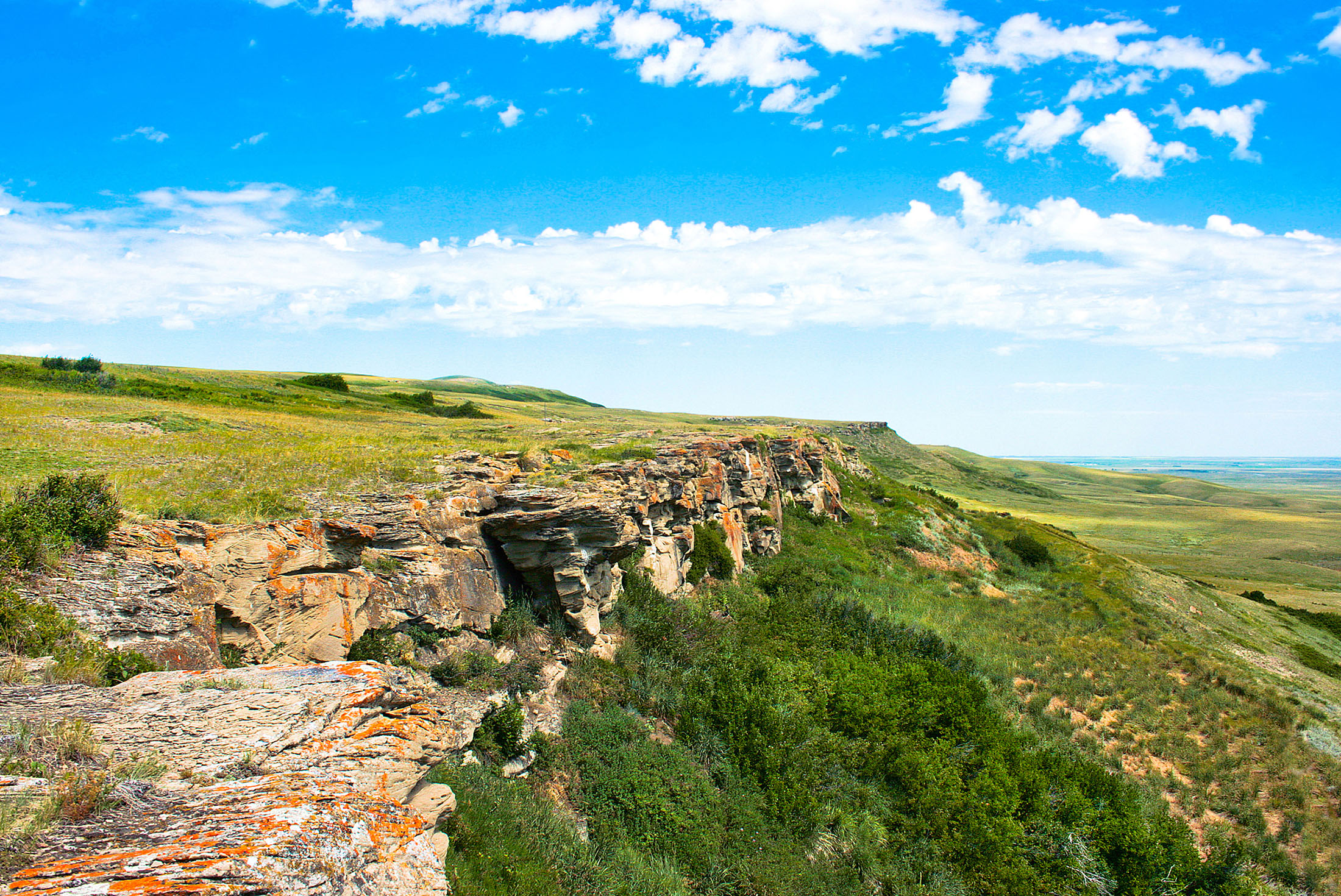 Welcome to Canada! You will be transferred to your hotel upon arrival. Your adventure begins with a welcome meeting at 6 pm today. If you arrive early into Vancouver, take a walk around the city's historic Gastown site or wander through Chinatown for a bite to eat. The city's coastal setting is beautiful, bordering an ocean harbour to the north and a river to the south. The majestic Rockies, often snow capped, provide the eastern horizon.

Like many great cities, Vancouver is graced with a natural oasis: the 1000-acre downtown sanctuary called Stanley Park. Unlike other large urban parks, Stanley Park was not drawn up by landscape architects, but rather evolved over many centuries. Its land was originally used by indigenous peoples for thousands of years before the mid-19th-century gold rush brought British settlers to the region. This morning you will take a First Nations interpretive tour of the park that not only highlights its natural beauty but imparts intimate cultural and scientific knowledge of the Northwest Coast trees and plants. You will then be free to explore a city of remarkable charms, from diverse and distinctive neighbourhoods to a thriving grassroots cultural presence to a craft-beer scene that’s among the best in the world.

Head into the Canadian Rockies with a drive to Sun Peak Resort (approximately 5 hours). Billed as Canada's Alpine Village, the resort is nestled at the centre of three mountains and features shopping boutiques, restaurants and accommodations, all within easy walking distance. After settling in stretch your legs with an included hike through wildflower-covered hills offering panoramic British Columbia vistas.

Enjoy a free day to breathe clean mountain air, take a hike, play tennis or a round of golf, or maybe treat yourself to a spa treatment. Later in the afternoon, set off on a canoe trip around nearby McGillivray Lake. While basking in the serenity of your surroundings, learn about the history of Voyageurs (French Canadians who transported furs by canoe from the early 17th to the mid-19th centuries) and the role of the North West Company and Hudson Bay Company in the settlement of Canada. During the trip keep an eye out for eagles, osprey, loons, beavers, deer, moose, bears and other wildlife. You will also see fur trade-era artefacts like original maps and beaver traps before enjoying a four-course ‘Fur Traders Feast’ at the McGillivray Lake Outpost.

Drive to Jasper National Park today (approximately 6 hours). Along the way you will stop to embark on a remarkable one-hour safari along the Blue River. Board a specially designed boat and explore up to 12 kilometres (8.7 miles) of the spectacular Grizzly Bear Valley. Guides will point out bears, glaciers and waterfalls toppling from snow-capped mountains as you skim over the water’s surface. Later on, explore the shops, bars and restaurants of Jasper at your leisure.

Go in search of bears, elk, moose, coyotes and wolves today on an included wildlife trip through the postcard-perfect Athabasca Valley. This half-day tour is done by vehicle and will leave you understanding how the valley’s ecosystem supports these large animals. The rest of the day is free. Perhaps try one of the walking trails close to town such as the Red Squirrel trail along the Athabasca River. If you're looking to take it a bit easier, head down to the Miette Hot Springs and soak in the views of Fiddle River Valley. Or you can opt for some indoor fun at the Jasper Brewing Company sampling local beers.

In the morning, take a unique guided tour of Maligne Canyon. At over 50 metres (160 feet) deep, and steeped in roaring waterfalls, it’s a sublime 90-minute walk (and included picnic) you won’t soon forget. If you have time, take the Jasper SkyTram, the highest guided aerial tramway in Canada. Its 7-minute ride elevates 2277 metres (7472 feet) to a magnificent vantage point that includes views of six mountain ranges and Mt Robson in British Columbia (conditions permitting).

Prepare yourself for the drive of a lifetime – and make sure your camera’s fully charged – as you set out on the Icefields Parkway. The world-renowned roadway between Jasper and Banff stretches 232 kilometres (144 miles) through a mind-blowing landscape of jagged mountaintops and over 100 ancient glaciers. At its heart is the Columbia Icefield, the largest ice field in the Rocky Mountains of North America. As the massive 6 kilometres (3.7 miles) long and 1 kilometre (.62 mile) wide Athabasca Glacier flows to within walking distance of the roadway, your 3-hour trip includes a hike to its ‘toe’ and included glacier walk. You will arrive in Lake Louise, inside Banff National Park, after nightfall.

Pay a visit to Lake Louise with the group. After a buffet breakfast with a view at the stately Fairmont Chateau Lake Louise, take a walk around the impossibly turquoise, glacier-fed lake, hike trails in the surrounding hills, or perhaps take a canoe trip along its placid surface.

You're free to spend your final day in one of Canada’s most popular national parks however you like. An optional helicopter ride throughout the park’s unparalleled mountain scenery is highly recommended. With its coniferous forests, alpine meadows, icefields and glaciers, Banff is an outdoor enthusiast's paradise. There are opportunities for canoeing, mountain biking, hiking or riding the gondola to the top of Sulphur Mountain. Alternatively, don an old-fashioned swimsuit and soak in the hot mineral waters of the local hot springs.

It's one thing to see dinosaur bones in a museum, and quite another to see the remains of an in-situ hadrosaur where it’s laid undisturbed for millions of years. Today you'll drive to Dinosaur Provincial Park (approximately 4 hours) for a guided tour of a UNESCO World Heritage Site that covers 80 square kilometres (620 square miles) near Brooks, Alberta. Since the 1889 discovery of an Albertosaurus – a cousin of the T-Rex – more than 400 dinosaur skeletons have been found in the park, representing 55 individual species. This makes it one of the world’s richest dinosaur fossil sites. Afterwards you’ll visit the rustic Patricia Hotel and have a chance to cook your own steak over a fire. You’ll then drive to Brooks and stay there for the night.

Begin the day with a 2–3 hour drive to an archaeological site that preserves some remarkable Native American history. Head-Smashed-In-Buffalo-Jump is a UNESCO World Heritage Site that bears witness to a method of hunting practiced by the Plains People for nearly 6,000 years. Due to their understanding of the regional topography and bison behaviour, the native people were able to hunt bison by stampeding them over a cliff. You’ll then continue on to Calgary (approximately two hours) for a free afternoon before a farewell dinner this evening.