Take part in a hands-on cooking class in Konya that will introduce you to the earthy flavours of Sufi cuisine – a hearty fare that dates back to the 13th-century.. Experience the traditional way of dining in Sanilurfa as you gather with the locals, dine on handmade cig kofte and witness a magical performance by regional musicians.. Indulge in the Iskender kebap at the restaurant where it was invented in 1867 – there’s a reason this mouth-watering Turkish classic sees eager diners queuing out of the door.. Enjoy a homecooked dinner of a local fare as you’re welcomed into Nuray’s enchanting cave house in Cappadocia to try your hand at Central Anatolian cuisine under her tutelage.

Take a culinary journey through Europe and Asia on this authentic food adventure full of Turkish delights. From the aromatic spice bazaars of Istanbul, through the Anatolian wine cellars of Goreme, and on to the kitchens of Gaziantep – the country’s kebap capital – discover an intoxicating combination of east and west cuisine and be rewarded with a wealth of secret recipes and endless memories. From bites to sights: witness the spectacular Blue Mosque, the impressive whirling dervishes, and the ancient site of Gobeklitepe – an archaeological complex that pre-dates the pyramids – all while feasting on the delectable dishes of their regions. Whether you’re dining on age-old Ottoman recipes that were served to the Sultan, indulging in a heart-warming homecooked fare in the caves of Cappadocia, or exploring the gastronomic alleys of Kalakoy on the hunt for flavour-filled street food, this exploratory adventure through the tastes of Turkey will surpass all expectations. 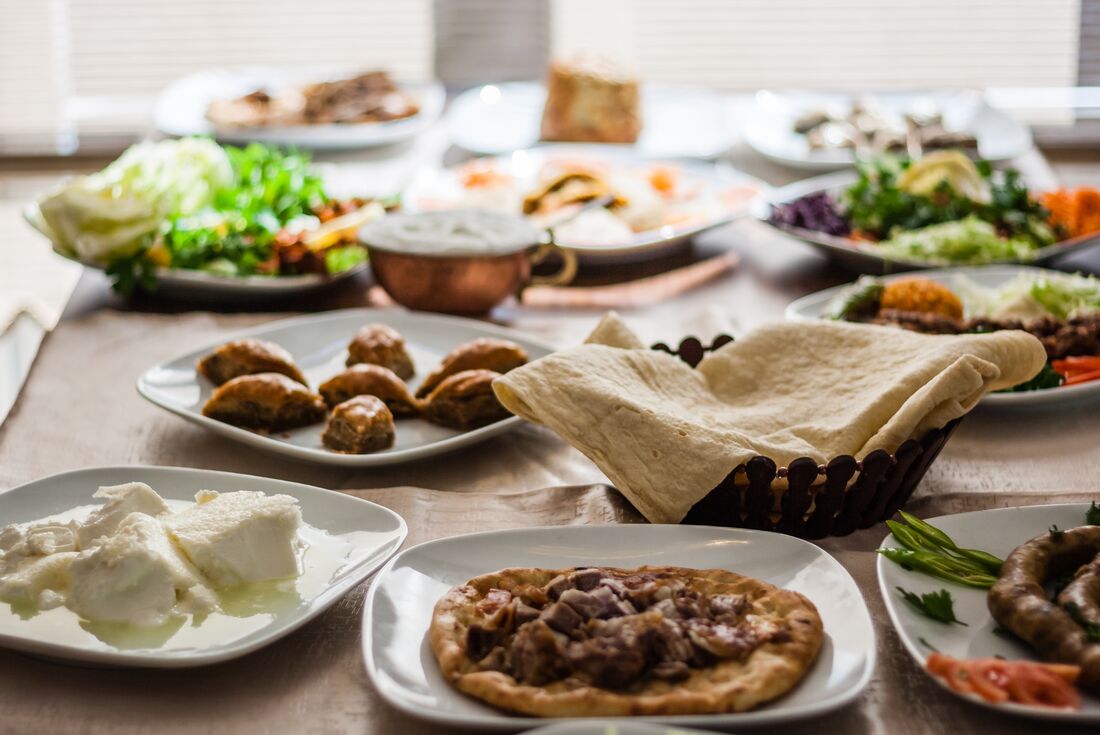 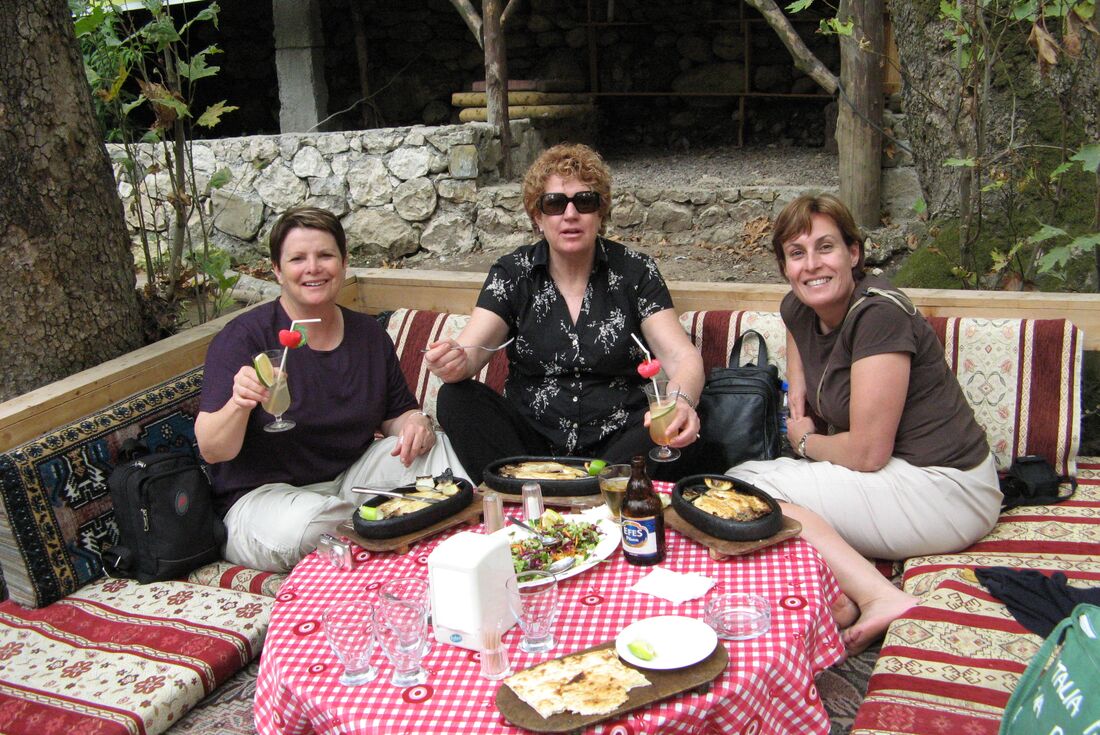 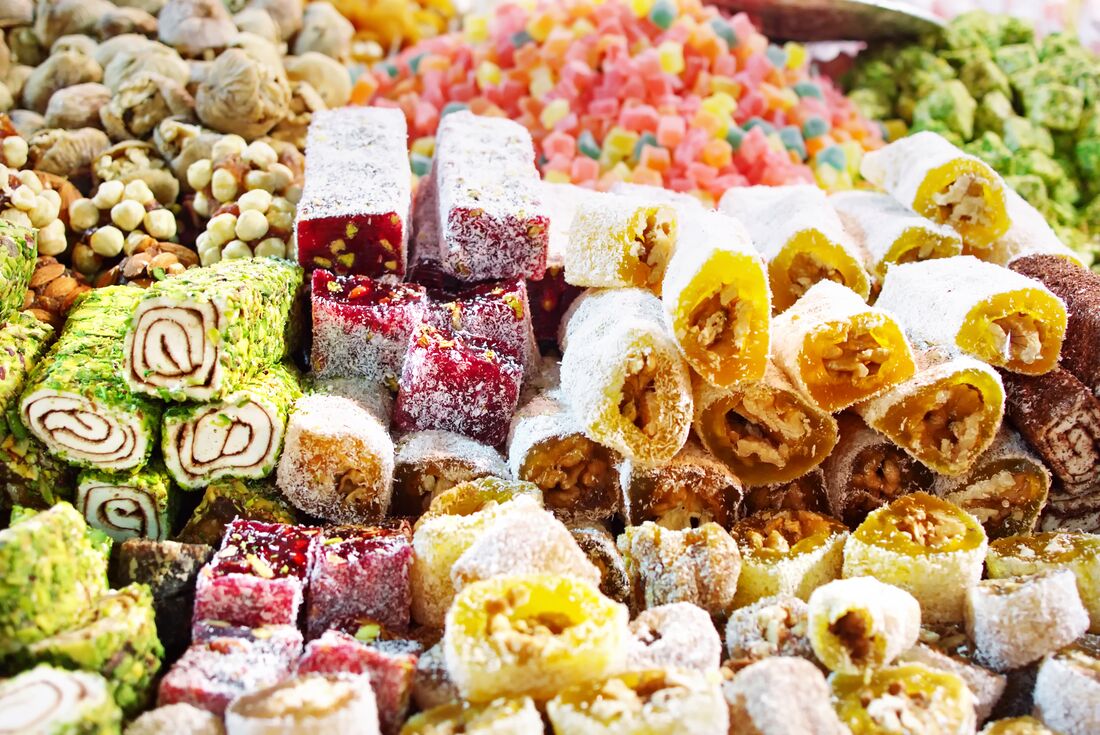 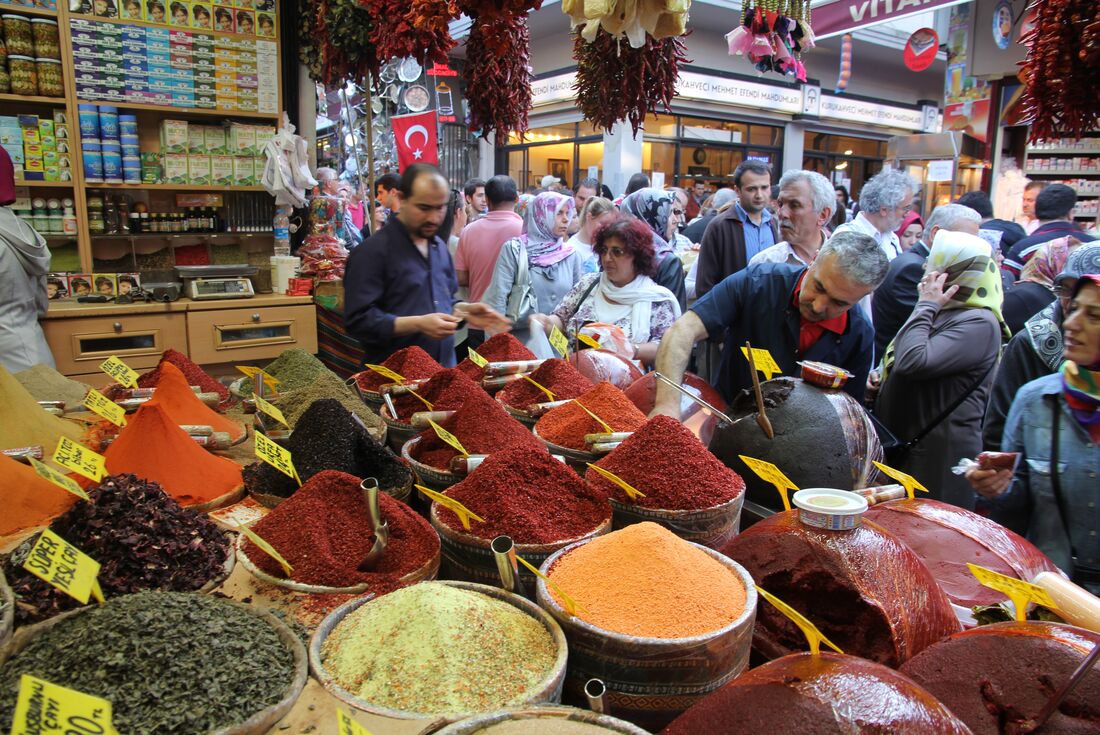 Welcome to Istanbul, a historic city straddling two continents and simply brimming with delectable dishes. Your food adventure begins with a welcome meeting at 6 pm, however if you arrive early, don’t be afraid to head out into this captivating city, where east beautifully blends into west, and start exploring. This evening join your new companions for a welcome dinner at at a traditional restaurant, a favorite with locals and the perfect introduction to the 'meze' of the region with sweeping views of the city.

After breakfast, embark on an orientation tour of Istanbul – a magical metropolis that the Greeks, Romans, Byzantines and Ottomans have all called home. Explore the Old City, visiting the Blue Mosque, Hippodrome, Grand Bazaar and the celebrated Egyptian Spice Bazaar. Sample Turkey's iconic 'Balik Ekmek,' (grilled fish sandwich), a hallmark of the country's street food. Enjoy an afternoon at leisure, perhaps exploring the bazaar’s further and getting into some good-natured haggling with local artisans at one of over 3000 stalls of handcrafted jewellery, textiles and books. Alternatively, you might like to hunt down some delicious delicacies like ‘peynir borek’ (feta cheese pastry) with a tulip glass of sweet tea. Later, join back with your group and take a ferry to Kadikoy where you’ll explore the culinary backstreets on a guided street food tour of Istanbul’s tastiest treats. Your tour concludes at the celebrity chef’s restaurant ‘Çiya Sofrasi’, the owner of which, Musa, was featured on ‘Chef’s Table’ season 5. Watch this master meticulously recreate a selection of regional dishes, which you have the pleasure on indulging in for dinner.

This morning, depart Istanbul and fly to Sanliurfa. Refuel with a delicious lunch at Altin Lokantasi, a traditional restaurant renowned for their lahmacun (Turkish pizza) and considered one of the best places in the country to try it. Walk off your satisfied stomach with an orientation walk around the lake, before driving to Gobeklitepe, one of the most significant archaeological discoveries of the 21st century and considered to be the first temple of the world. The site dates back over 12,000 years, which makes it 8000 years older than the pyramids and 7000 years older than Stonehenge. This evening, enjoy a special kind of welcome party, known as Sira Gecesi, and experience the traditional way of dining in the south east part of Turkey. Sit on the ground with locals, dine on handmade ‘cig kofte’ (a savory meatball dish) and enjoy a wonderful performance by regional musicians.

Today you’ll drive to Gaziantep, kebap capital of the country, and is home to over 180 pastry shops producing some of the world’s best pistachio baklava. On arrival, take a walking tour of the old bazaar, finishing up at the Millethan Baklava Museum. For dinner, enjoy the real Turkish kebaps at Kusleme Kebaphan – one of the best kebap houses in the country – take the chance to check out their kitchen, watch a demonstration, and pick up some great cooking tips!

Today you’ll take a long drive from Gaziantep to Cappadocia, stopping at Maras along the way to try their famous Turkish ice cream. Arrive in Cappadocia late this afternoon and join your friendly host, Nuray, for a homecooked dinner of a local fare in her enchanting cave house. Nuray is a participant of Peregrine’s women empowerment training, a programme which supports gender equality across the workforce in Turkey.

This morning, go underground to explore the ancient subterranean city of Ozkonak and get a taste of what life was like 40 metres below the surface. Next, enjoy a pottery demonstration and carpet weaving demonstration. The evening is free for you to explore or relax. Perhaps take an optional Wine and Sunset tour! Your leader will be able to assist you.

Bid farewell to Cappadocia after a relaxed morning. Today discover Sufi cuisine - a combination of earthy flavours and spices that date back to 13th century Konya region, known as the Sufi era. The dishes are similar to the Ottoman cuisine, but with more of a meat focus. After this delicious insight into age-old Sufi recipes, head to the train station and board your overnight sleeper. The overnight train is a 1st class sleeper and very comfortable – this is a great way to make the most out of your adventure as you’ll be saving on travel time and waking up in a brand-new destination.

Arrive by train and unwind with a traditional Turkish breakfast before continuing to Selcuk. Later this afternoon visit Ephesus, one of the best-preserved classical cities in the Eastern Mediterranean and arguably the greatest Greco-Roman site in the world. Tour around the amphitheatre, stroll the marble streets once walked by Cleopatra and Mark Antony, and marvel at the gymnasium, baths and beautifully restored Library of Celsus. After a long day at Ephesus return to your hotel to freshen up before a cooking class focusing on Turkish and Mediterranean cooking.

This morning, drive to the pretty port town of Ayvalik, home to a fascinating mix of Greek and Turkish cultures, and a place that even takes its name from food (ayva is Turkish for quince). The town is famous for olive oil, but for todays lunch, you’ll enjoy local fare of stuffed mussels and a traditional Ayvalik toasted sandwich, stuffed with sausage, pickle, tomatoes, salad and chips – smothered with tomato sauce and mayonnaise. This afternoon, join your leader for a walking tour of Ayvalik’s local market – pick up fruits and snacks before taking a boat over to Cunda island for a delicious picnic. Cunda Island is filled with Greek Orthodox churches and is famous for its dairy farming, if there’s time, perhaps indulge in a selection of delicious treats created with local cheeses. Back in Ayvalık, the village is set around a harbour and looks out to the Aegean Islands, so a drink at a harbourside bar is a great way to enjoy the sunset.

After breakfast, drive to the city of Bursa, but not before stopping off on the way for a regional varietal wine tasting at Ma'adra vineyards! Bursa is an old and important city with a rich and varied history. It had a central role in the creation of the Ottoman Empire, and from 1326-1402 AD, served as the Sultan's capital. With elegant mosques, such as the supremely beautiful Yesil Camii, an intriguing covered bazaar, and teahouses filled with locals, Bursa offers a glimpse of traditional Turkish life. Perhaps enjoy a delicious Pideli Kebap for lunch before embarking on an orientation walk through though the fascinating warren of streets and old Ottoman hans (warehouses) that line the city. Bursa is also home to thermal springs nearby at Cekirge, famously used by Byzantine imperial families. In your free time, perhaps treat yourself to a soak, steam, and scrub, Turkish style. This evening is free, but your leader can recommend for you to indulge in a Bursa delicacy, the hearty Iskender Kebap, at the place where it was first created. One of the most famous dishes in Turkey, the Iskender takes its name from its creator, Iskender Efendi, who resided in Bursa during the late 19th century. This mouth-watering feast involves a filling of thinly slice lamb, tomato sauce and melted sheep butter, wrapped in fresh pita bread and dressed with yoghurt. However, be prepared to wait in line as this incredibly popular establishment has seen long lines of eager diners since it opened its doors in 1867, and for good reason. Later in the evening, experience a real highlight – as you’re welcomed into a Dervish Lodge to witness a hypnotic performance of the Sema (the ceremony of the Whirling Dervish) and take the opportunity to learn a bit more about their mesmerising culture.

This morning, drive back to Istanbul and enjoy time at leisure to relax or perhaps re-visit some of your favourite spots from the first few days. As night falls, gather with your group and leader for a farewell dinner at a specialist restaurant focusing on Ottoman palace cuisine which preserves the original recipes and techniques of the Ottoman empire’s greatest cooks. Many dishes were originally prepared at Topkapi Palace for the Sultan and his family in the 15th and 16th centuries. In addition to the venue also houses a historical archive of Ottoman culinary literature and recipes. 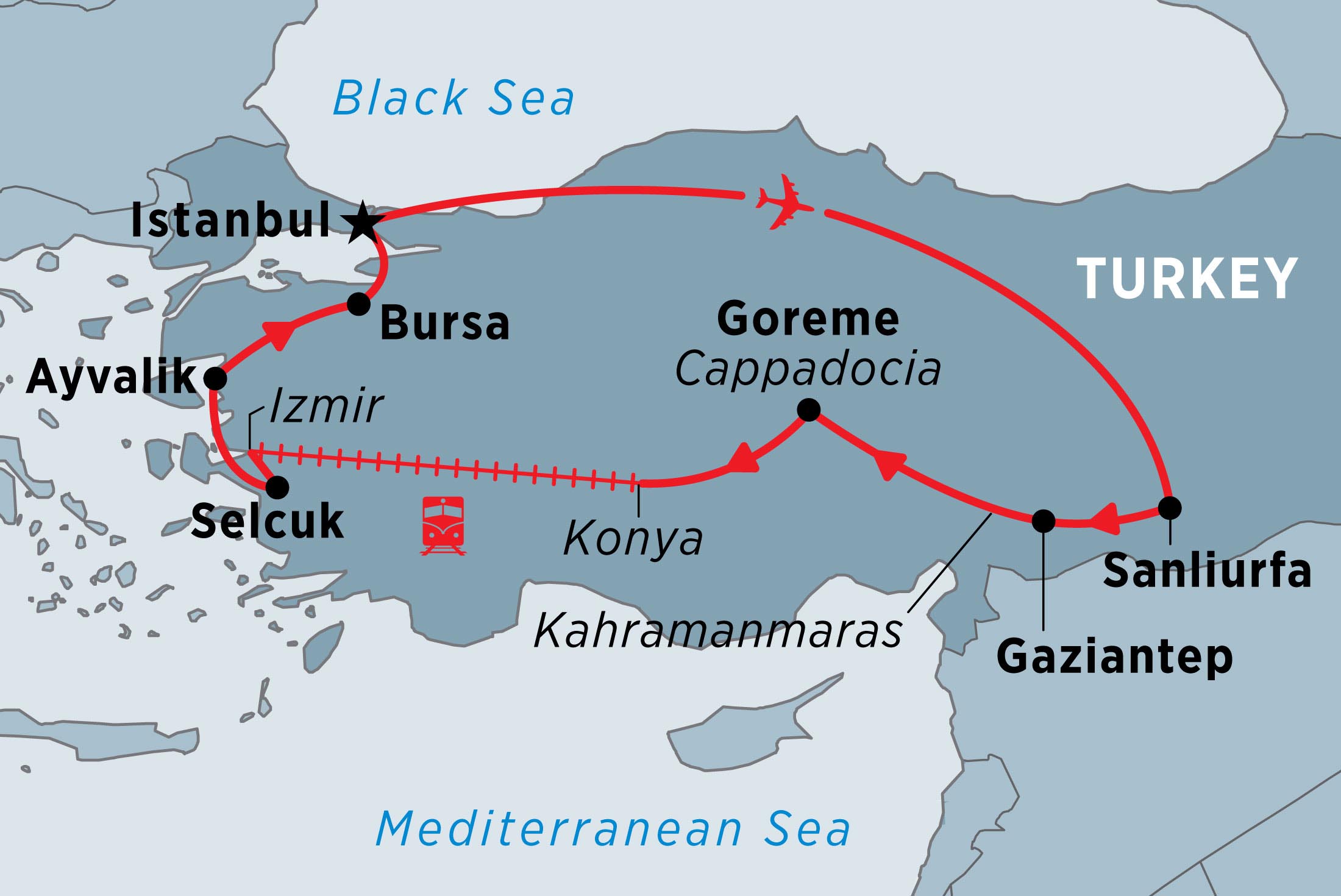