Dubrovnik’s charms reach far beyond the famed beautiful city walls. Explore the undisputed jewel of the Dalmatian Coast, and maybe cruise to Lokrum Island where a botanical garden, Benedictine monastery, and excellent swimming spots await. Korcula Island is a quiet escape full of vineyards, olive groves and tranquil coves – indulge in local island food and drink specialties during a feast in a sleepy village. Hvar Island seems to have it all: Renaissance architecture, beautiful beaches, lush green landscapes and excellent Dalmatian cuisine. Split is a haven of relaxation and culture. Unwind with a walk along the waterfront promenade and explore the impressive ruins of Diocletian’s Palace

Idyllic beaches, ancient ruins and rustic old world charm are just a few reasons that people are drawn to Croatia and it’s not just your everyday travellers either – Game of Thrones continues to shoot season after season in the stunning scenery of places such as Dubrovnik and Split. Pepper up this trip with a bit of island hopping between Korcula and Hvar, visit the pristine beaches of Lumbarda and trek through the woods of Mljet as you share with your family some of the best experiences the Dalmatian coast has to offer. 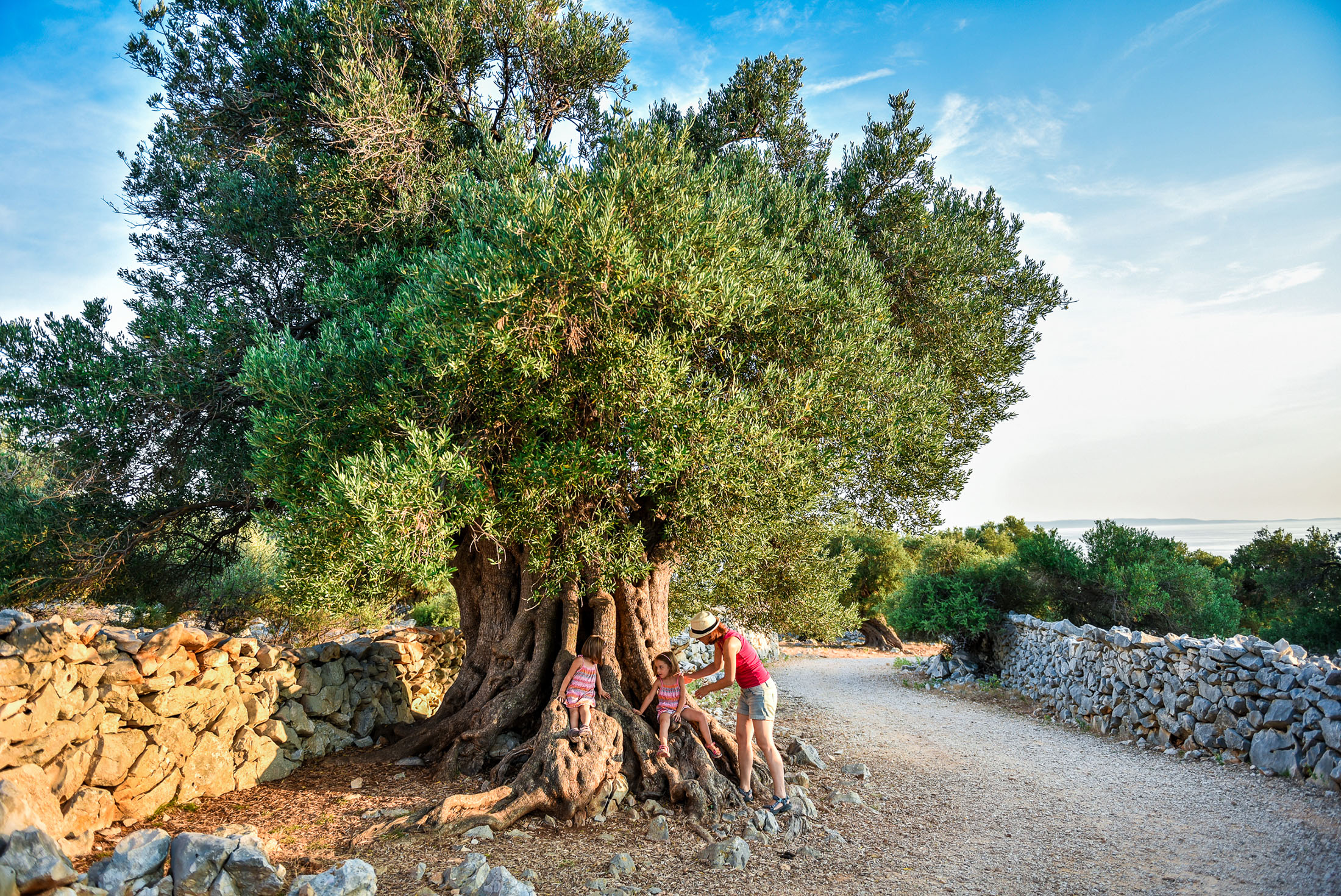 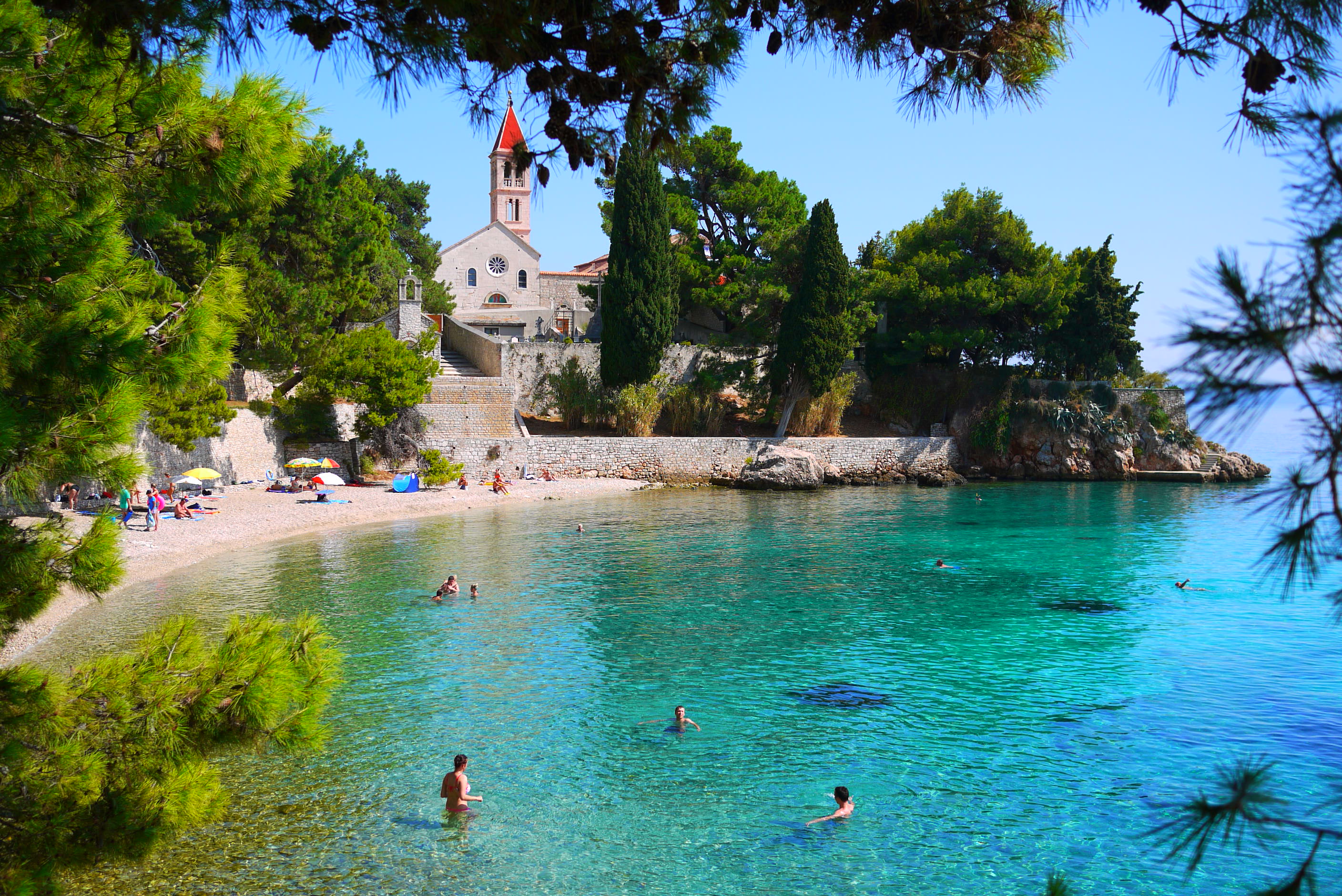 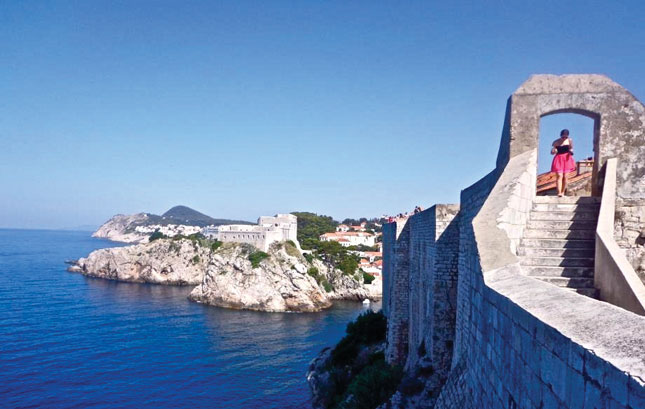 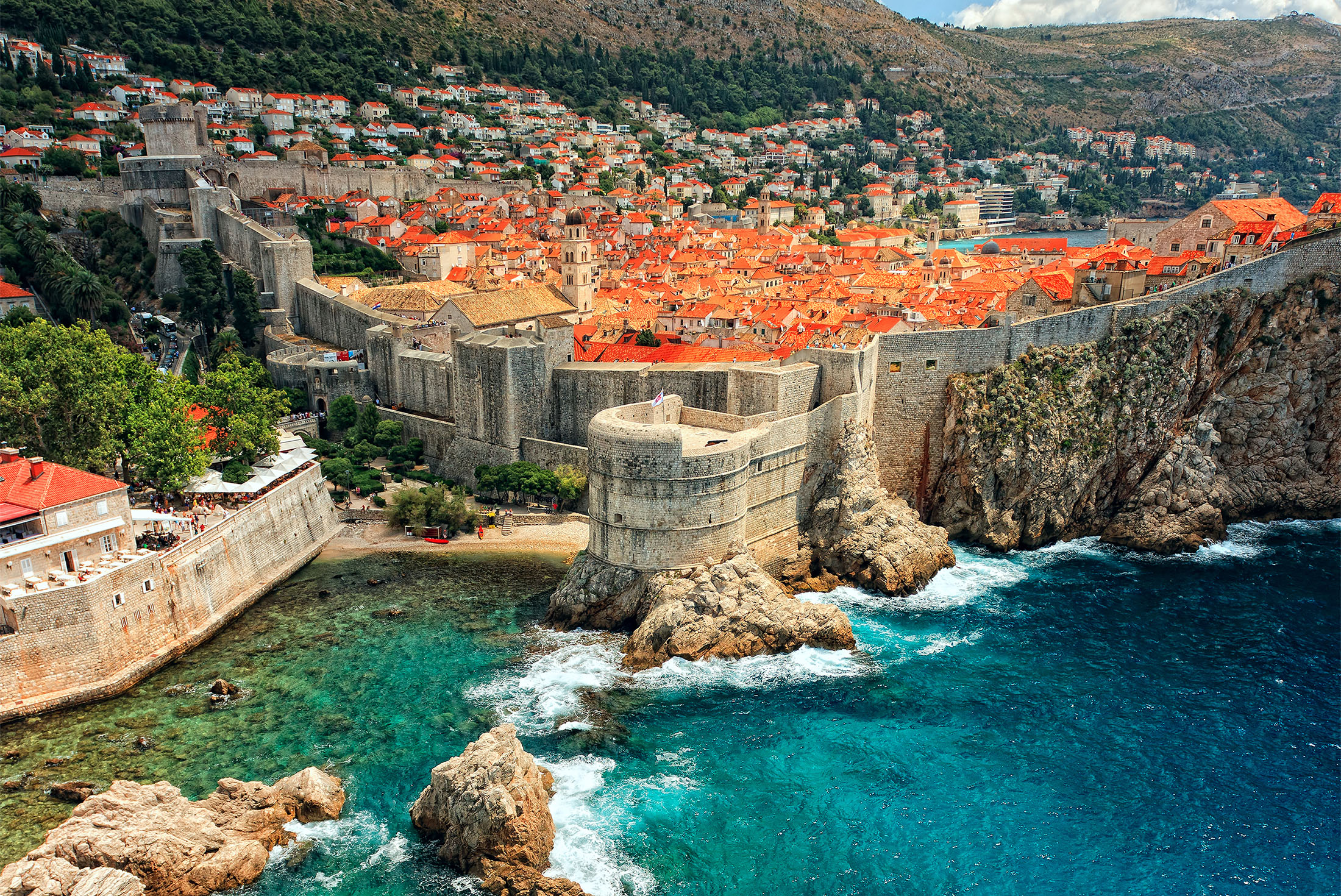 Dobro Dosli! Welcome to Croatia. Dubrovnik' Old town is a beautiful white stone town surrounded entirely by city walls. Although it experienced devastation during the war in the early 1990s, the restored old town remains as charming as ever. With the sparkling water of the Adriatic in the background, Dubrovnik is picturesque, full of character and  the Old Town easily be covered on foot. Meet up with the other adventuring families tonight in a pre-trip meeting at your hotel, beginning at 6 pm. Check with the hotel to confirm the time and place, and remember you can arrive at anytime before then. If you can’t arrange a flight to that will get you to the hotel in the early evening, you might want to arrive a day early. If you're going to be late, please inform the hotel reception. We'll be collecting insurance details at this meeting, so please have these on hand. If you arrive early, perhaps head out to one of the Elafiti Islands. There's Lopud, a quiet island with lovely hikes, clean beaches and a ruined castle. Kolocep is a sleepy enclave that boasts walks for every fitness level, and Sipan is the most populated of the isles and reputedly has the most hospitable inhabitants. After the meeting, perhaps enjoy a meal with the group so you can get to know the other families.

Start the day with an orientation walk throughout Dubrovnik. Enjoy a walk along the city walls of ‘Game of Thrones’ fame, taking in views of the sparkling Adriatic Sea from this undisputed jewel of the Dalmatian Coast. With the rest of the day free for you to explore, you might want to take the family to visit Big Onofrio's Fountain, built by architect Onofrio della Cava in the 15th century to supply water to the city. Perhaps check out the Franciscan monastery, home to one of the world's oldest pharmacies, or the Sponza and Rector's Palaces, the only Renaissance buildings in the city to survive a devastating earthquake and fire in 1667. You can get a snapshot of Croatian history at one of many museums, take a quiet moment inside an old cathedral, or cruise out to nearby Lokrum Island. If the family is still feel energetic after a day exploring the city, you can take the switchbacks leading up Srd Hill behind Dubrovnik for spectacular views of the city and the Dalmatian coastline. Alternatively, the newly restored cable car can whisk you to the top in less than 10 minutes. The hill is topped by a castle from Napoleonic times, which now houses the Museum of the Croatian War of Independence.

Take a visit to the picturesque Trsteno Arboretum, a fortified garden landscape with cobblestone paths, scenic ocean views and impressive statues. If the area seems familiar, then it probably is; this was another filming location for the Kings Landing gardens in Game of Thrones. After a wander past the stone columns and impressively vibrant plant-life, venture onwards in your private minivan towards Ston where you’ll visit a donkey farm just outside of the town. This working farm, a Croatian government supported agritourism project, focuses on producing goat and donkey milk for trade. Take the chance to enjoy a home cooked traditional meal on the farmstead and perhaps sample some of the local cheeses before the trip continues onwards to the island of Korcula. We are accommodated in a small fisherman’s village of Lumbarda, right on the sea front, just 10 minutes drive from the Old Town of Korcula. After checking in,a private transfer will take us back to Korcula Old Town for an orientation walk to get a feel for this historic fortified island town, including the Cathedral of St Mark, the 15th-century Franciscan monastery and the massive fortifications surrounding the city.In the evening take a public bus back to our lovely hotel where you can choose to relax with a drink or two by the hotel swimming pool.

After breakfast we jump on a bike and cycle around Lumbarda region. Child sized bikes and helmets are supplied. Situated on the east side of the island, Lumbarda is surrounded by large sandy vineyards, clean waters, olive groves. forests and open fields – pedal casually to make sure you get to enjoy these serene landscapes. We will finish our bike ride at one of the most beautiful sandy beaches in Croatia, where you can run towards open sea for 50 meters and still be touching sand with your toes. You can either relax here or head out to Korcula Old Town for a bit more exploring. Later in the afternoon, make the short journey by local bus to the tiny village of Pupnat in the interior of the island. Here you’ll visit a local family-owned restaurant and eat outside on the patio. Sample some of the family vineyard's wines and be treated to a meal made entirely from ingredients found on the farm. Perhaps you can drink your wine like the locals do: mixed with a bit of water. The traditional Dalmatian meat loaf, or pasticada, and fresh grilled vegetables with olive oil constitute a typical dish, all served with fresh goat and sheep cheeses, and maybe some smoked ham to tie it all together. Don't forget to have a bit of travarica (a grappa-like drink made with the herb called verbane) and some Korcula cakes for dessert before heading back to Lumbarda town.

Set sail for the picturesque island of Mljet. Legendary in ancient history as the idyllic island where the shipwrecked Odysseus lived for seven years, today the island is a haven of lush national park, forests and small villages. Since Greek sailors sought haven here from storms, filling up on fresh water from the springs, the island has been inhabited by Illyrians, Romans, Slavs and Avars. Explore karst valleys and catch your reflection in inky blue lakes on a leader lead walking tour through the national park. Wander beneath cool pine forests, chasms and gorges while discovering ruins such as the remains of an Illyrian fortification, a Roman palace and a 5th-century church before sitting down to a picnic lunch. While no swimming is possible here, you may want to try the local wine – the fields and vineyards that dot the island are the foundation of the local economy, with Mljet's villagers producing wine and olive oil as they have been for hundreds of years.

A very early morning hydrofoil ferry takes you to the neighbouring island of Hvar. We catch the ferry around 6AM so our hotel will provide the group with a breakfast box to take on the ferry. There is also a cafe on ferry that sells coffee, drinks and pastries. Beautiful Hvar has an air of Venice about it, and is known as the 'Queen of the Dalmatian Islands'. Upon arrival, spend the afternoon relaxing on  Mustaco beach, then get to know the town with an evening orientation walk before visiting the 16th-century Spanjola Fortress, where spectacular views over the town and the Adriatic can be experienced. Accommodation: In Hvar the group will stay in different apartments/ rooms around the town (Families will always be together). There are bakeries selling fresh pastries and coffee around town as well as several restaurants around the main square that offer breakfast during our stay in Hvar.

Take a day trip to Stari Grad on the other side of Hvar Island, where you'll visit the charming Tvdalj Castle. Featuring an impressive developed facade, an ornate fish pool and rustic interior walls, this well-preserved piece of Renaissance architecture once served as the lavish summer residence of Petar Hektorovic, the Croatian poet. Return to Hvar and head to the beach for the evening to catch the sun setting over the sea.

If Dubrovnik is considered the heart of Dalmatia, Split is certainly its soul. Situated on a small peninsula on the eastern shores of the Adriatic Sea, it's the second largest city in Croatia. After taking a short boat trip to Split, start off with breakfast before joining a local guide for a walking tour of the city to learn about its history. See the original and fantastically preserved basements lying under the streets and buildings, as well as the Cathedral in Diocletian's Peristyle and Jupiter's Temple. Explore the impressive ruins of Diocletian's Palace, Split's most imposing structure and some of the most interesting ruins on the Adriatic coast.

There are no activities planned for the final day and you are able to depart the accommodation at any time. As there's a lot to see and do in Split, you may want to consider staying a bit longer – additional accommodation can be arranged if this is the case.