Gunung Leuser National Park is your best chance in Indonesia to see orangutans in the wild. Hike through the jungle, home to some 300 bird species and the endangered Sumatran tiger, on a small-group camping experience.. Begin and end your adventure in Sumatra’s largest city: Medan. Explore the mix of Asian cultures in the city, noticeable in its colourful architecture and delicious mix of food.. Let your knowledgeable group leader guide you through the thickets of the jungle, past small cultural villages, and to the best places to eat around northern Sumatra.. Climb the Sibayak Volcano to enjoy panoramic views at its spectacular summit, then head to local hot springs for some well-earned rest and relaxation after the descent.

Steamy Sumatra is a rugged jungle paradise for all types of adventurers. The world’s sixth largest island is teeming with untamed nature and is home to many endangered species, including the Sumatran tiger, rhinoceros, elephants and the acclaimed orangutan. On this nine-day Sumatran expedition, travel from Medan to Bukit Lawang and explore Gunung Leuser National Park. Head to Berastagi and hike up the steaming active volcano Sibayak, basking in the glory of misty panoramas from the summit. Finish in Samonsir on Lake Toba, where the colourfully dressed Christian Batak people are happy to have your company. Venture off the beaten track and learn a thing or two about Sumatra. 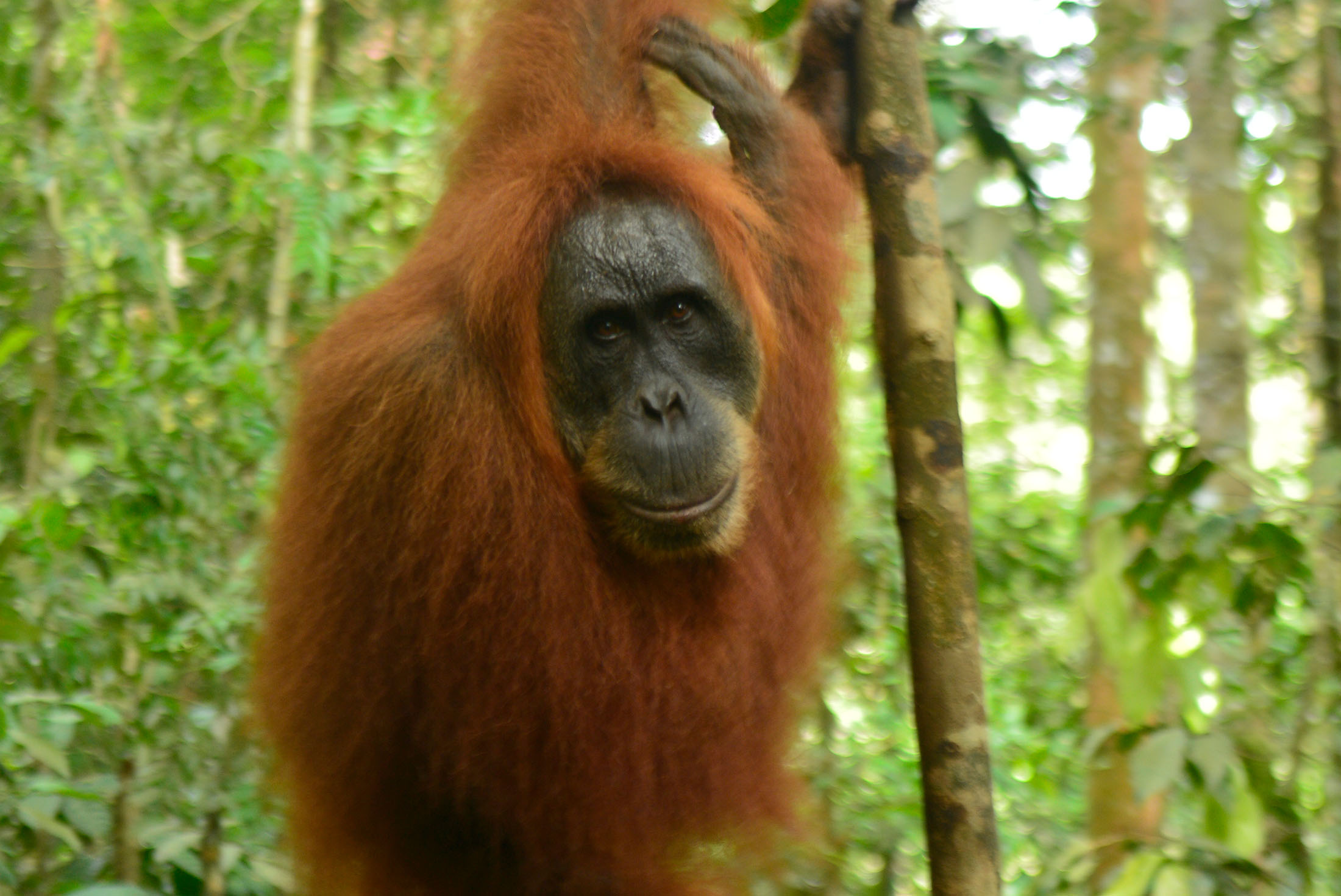 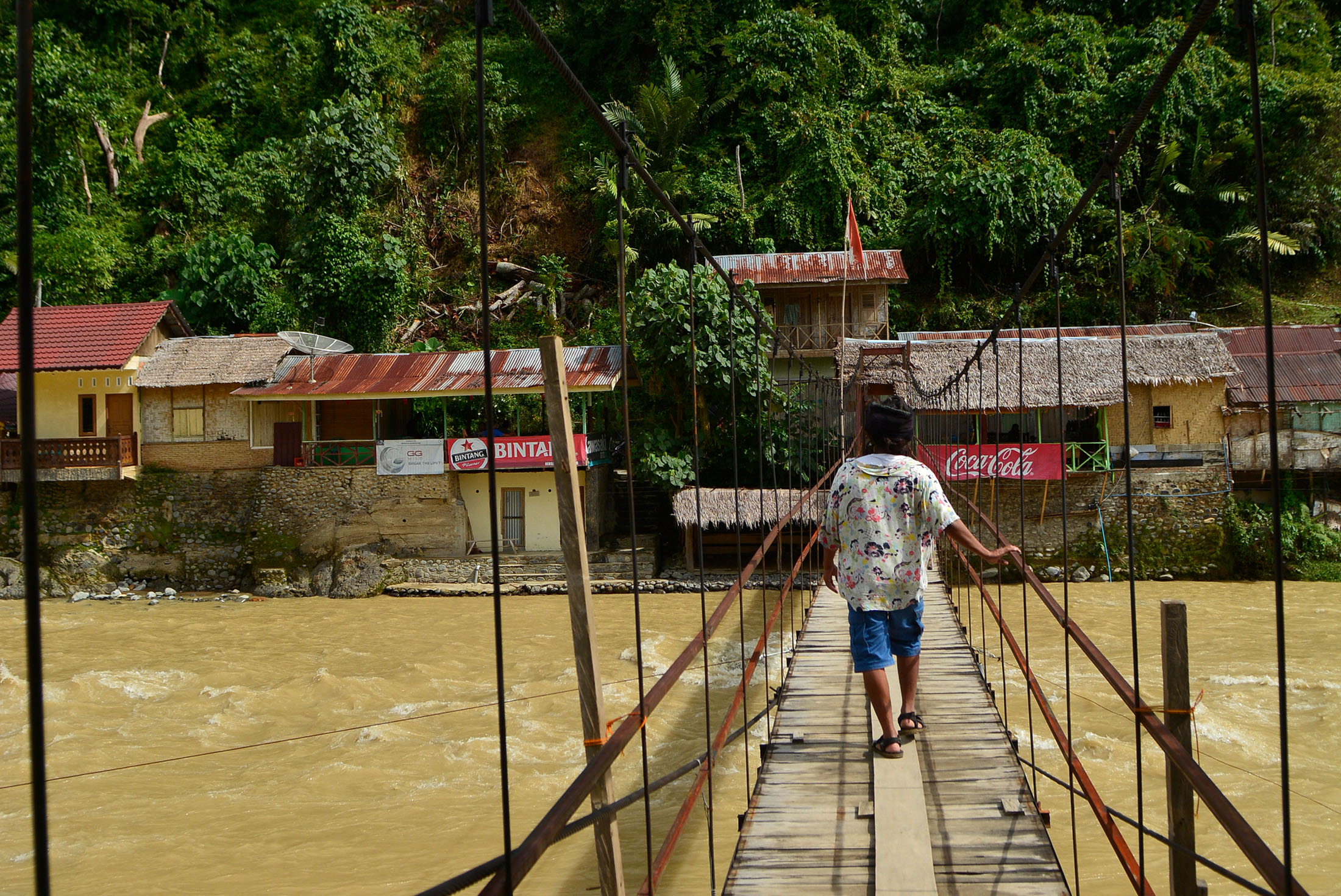 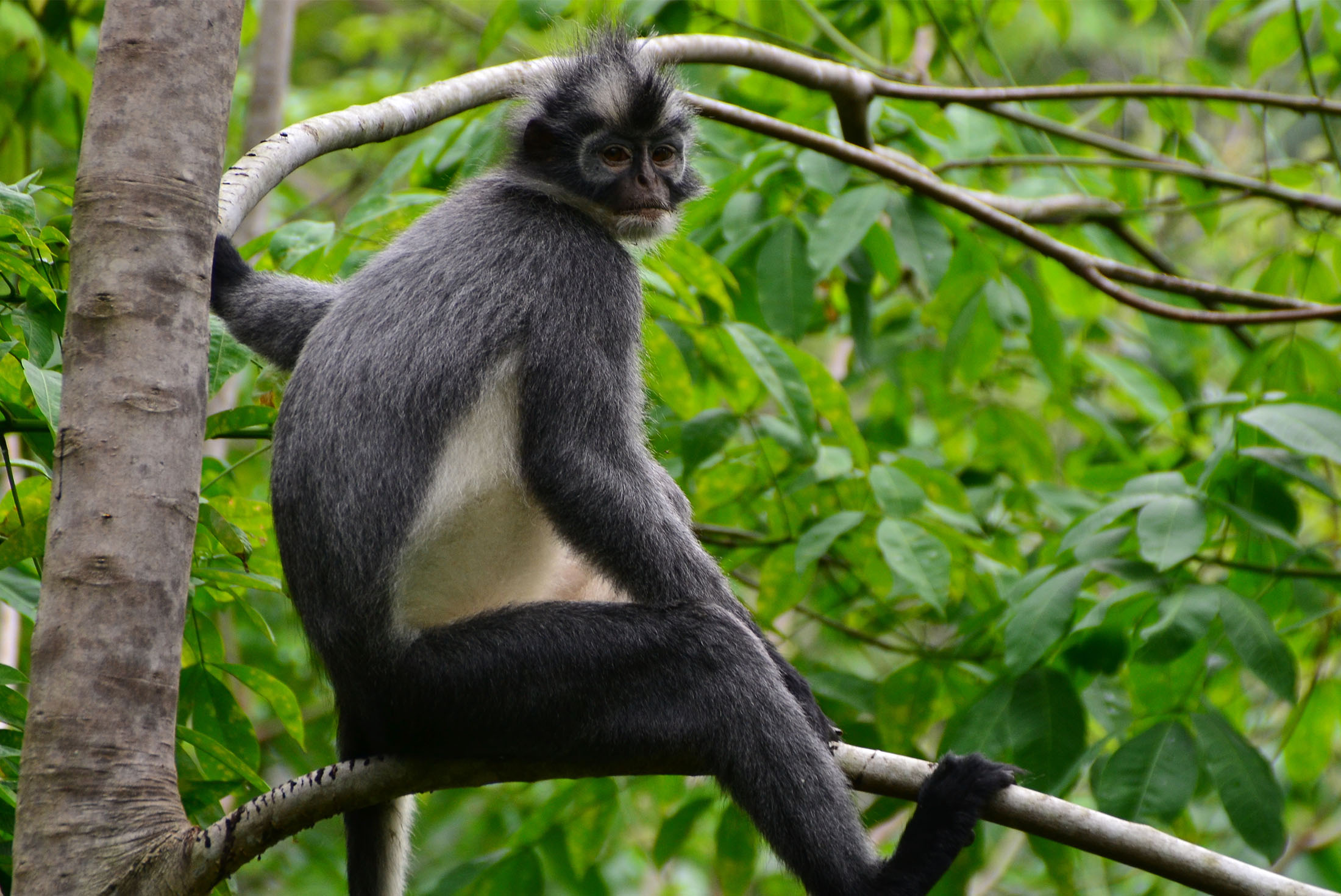 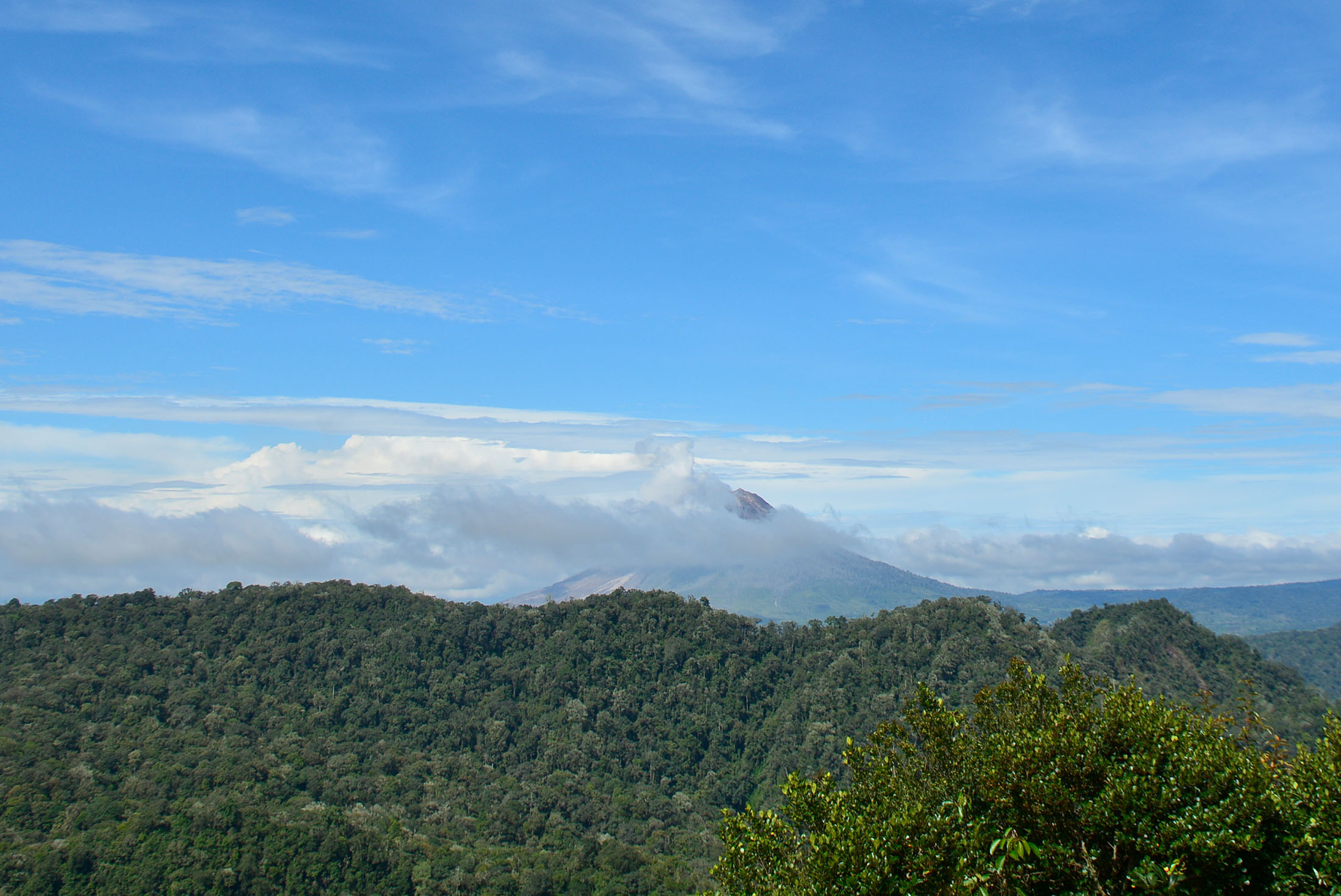 Selamat datang! Welcome to Indonesia. The adventure begins with a welcome meeting at 6 pm. If you happen to arrive early, perhaps check out Maimun Palace – designed by a Dutch Architect and built in the 19th century, it combines architecture from Malay, Indian and Islamic cultures and is now a museum. Alternatively, buy a ticket and take a guided tour of the museum at Tjong A Fie Mansion – known as "the historical jewel in Medan", the Tjong A Fie was built in 1895 by a hakka merchant and is modelled on the Cheong Fatt Tze mansion in Penang. After your important welcome meeting, you could head to grab some street food with your group at one of the night markets in town, or go to a local restaurant – your group leader will know of some good spots.

Jump aboard a private vehicle and drive to Bukit Lawang (approximately 5 hours). The first part of the journey involves quite heavy traffic, but the roads are nice and smooth. Closer to Bukit Lawang it gets bumpy and windy, so brace yourself for a bit of an adventure. The reward for the journey is the destination – Bukit Lawang a peaceful village located on the banks of the Bohorok river, right next to the Gunung Leuser National Park. In the afternoon you can take an optional tour in the countryside by becak (cycle rickshaw) or cool off with a refreshing swim in the river. There will be also be plenty of time to prepare for your jungle trek.

Set off on your trekking adventure through the Gunung Leuser National Park with an experienced guide (approximately 5–6 hours). The night will be spent camping out in the jungle. This UNESCO World Heritage-listed park spans 7927 square kilometres and is one of the world's most diverse ecosystems. It's the home of many endangered species, including the Sumatran tiger, rhinoceros and elephants. These animals are extremely rare to see but you will get the chance to go in search for wild orangutans. There used to be an orangutan rehabilitation centre here, but now these creatures have all been returned to their natural habitat, so this is your best chance in Indonesia to see orangutans in the wild. There are also 300 species of birds, and many rare plants and flowers. Today's hike is hilly and can be muddy. The paths are mostly clear, but there are some sections where you’ll have to climb over large fallen logs. You may stop and rest while the guides go in search for orangutans. Along the way, guides point out orangutan nests, edible plants for you to try, monkeys, birds, and wild orangutan. You will carry your own lunch and break for lunch along the way then continue trekking to the camp site, where the guides set up and cook dinner for the group.

You will wake early to the sound of gibbons and continue the trek down river (approximately 2 hours). Your feet may get wet, so strap-on sandals, booties or local rubber shoes are recommended to pack. Head back to Bukit Lawang, where day rooms will be made available for a freshen up and shower before you get on the bus. It's also a good chance to stock up on some tropical fruit for the road. Depart early afternoon for Berastagi (approximately 5.5 hours). Berastagi is the home of the Karo people, a Batak sub-group with traditional villages (long houses), and is your destination for the night.

Drive for approximately 30 minutes to the starting point of today's hike. The hike (approximately 2-3 hours) brings you to the top of Sibayak Volcano (2094 m). It's quite steep, muddy and slippery, especially in the wet season. Follow a shady jungle path which, towards the top, opens up into a more alpine setting. Long pants are essential to protect you from poisonous plants, and a trekking stick will also come in handy. After reaching the top, sit down to a traditional bungkus lunch and enjoy the views. From the summit you can see (and hear) the steaming vapours escaping from the fumaroles of this active volcano. Then it's time for the descent (approximately 1 hour). Afterwards, head straight to the nearby hot springs for a soothing soak – after a few days of trekking, you deserve to relax in these pools, which are all naturally heated by the volcano.

This morning, head to Tongging Village by private vehicle, on the banks of Lake Toba (2 hours). The road from Berastagi to Lake Toba is a nice, smooth road. Then, continue on and stop at Sipiso-Piso waterfall, which was formed by a small underground river of the Karo plateau. Watch as water cascades from a cave in the side of the Lake Toba caldera some 120 metres (360 feet) down to lake level – forming Indonesia's highest waterfall. Lake Toba itself, surrounded by mountains, is a peaceful spot to relax. It was formed by a huge volcanic eruption 70,000 years ago; a second eruption 50,000 years later created an island the size of Singapore in the middle of the lake – Samosir Island. Your accommodation tonight is right next to the lake and boasts nice views of the water, mountains and rice fields.

Embark on a day tour in Samosir. Visit the Stone Chairs and the Simanindo Museum (in a traditional house). You’ll also travel up to a viewpoint on the island which gives you a panoramic vista of the below Lake Toba and the surrounding Sumatran countryside. Walk through nearby rice fields and stop by a local Batak house for a traditional lunch. Toba Island is dotted with many ancient and modern grave sites, several of which you’ll see on today's tour. You’ll also have the chance to enjoy a traditional Batak dance performance. The Toba Bataks have a unique religion, architecture and culture. Although they are predominantly Christian, they also practice animism. The most distinctive element of their culture is the traditional architecture – extraordinary boat-like houses with roofs resembling buffalo horns.

With no activities planned for today, you are free to depart at any time. If you would like to spend more time in Medan, we’ll be happy to book additional accommodation (subject to availability).