Feast your eyes on the best of Turkey and Greece’s otherworldly sights, from the Cotton Castle of Pamukkale to the psychedelic rockscapes of Cappadocia and the legendary caldera of Santorini.. Indulge in iconic feature stays in a cave hotel in Cappadocia and a whitewashed hotel with spectacular views in Santorini.. Experience the dazzling variety of Turkish and Greek cuisine during welcome dinners in Istanbul and Athens, cooking classes using home-grown produce in Selcuk and Naxos, freshly prepared lunch on board a boat cruise in Kas and wine tastings in both countries.. Join experienced local leaders as you stroll the ancient streets of Ephesus, uncover the secrets of Sagalassos, explore the legendary ruins of Troy and discover the history and charming villages of Paros.

Dive into the magic of the Mediterranean on a 23-day Premium adventure through Turkey and Greece. Discover stunning islands and a sunken city, enjoy guided tours of Gallipoli, Troy, Ephesus, Antalya and more, and marvel at diverse landscapes, from the fairy chimneys of Cappadocia to the glittering Mediterranean Coast. Hop across to the storied city of Athens, explore the charming villages of Paros, uncover ancient riches in Naxos and soak up million-dollar views in Santorini. With knowledgeable local leaders and a group of keen travellers by your side, you’re never far away from an unforgettable moment. 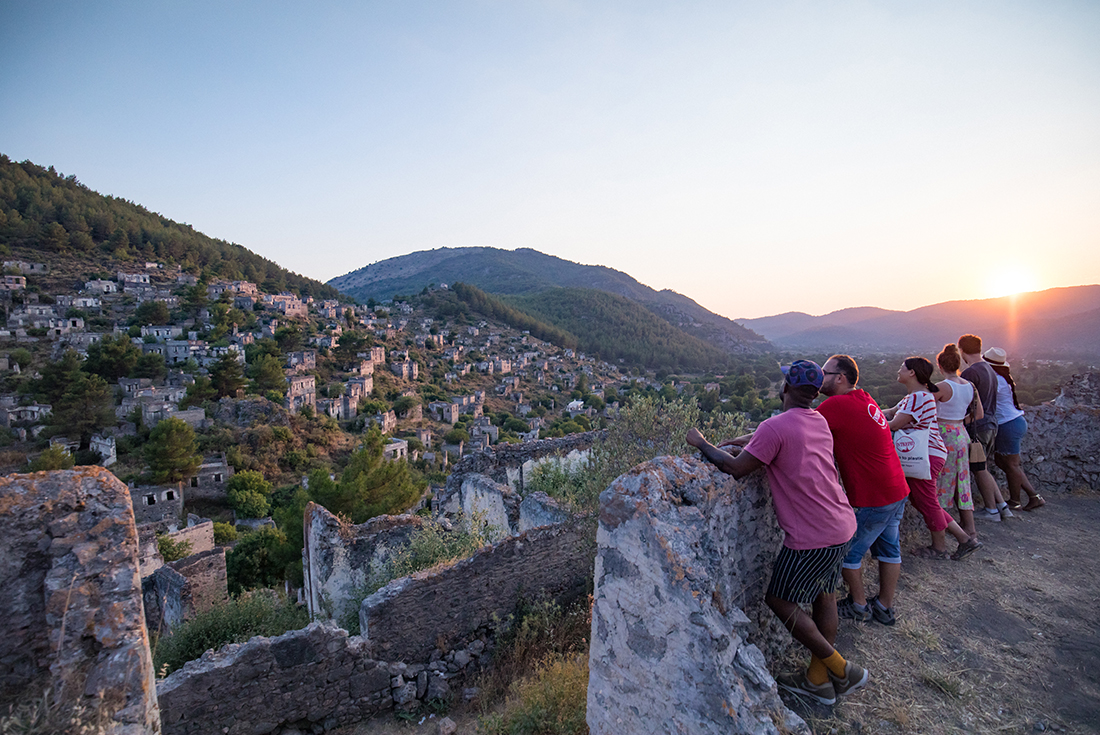 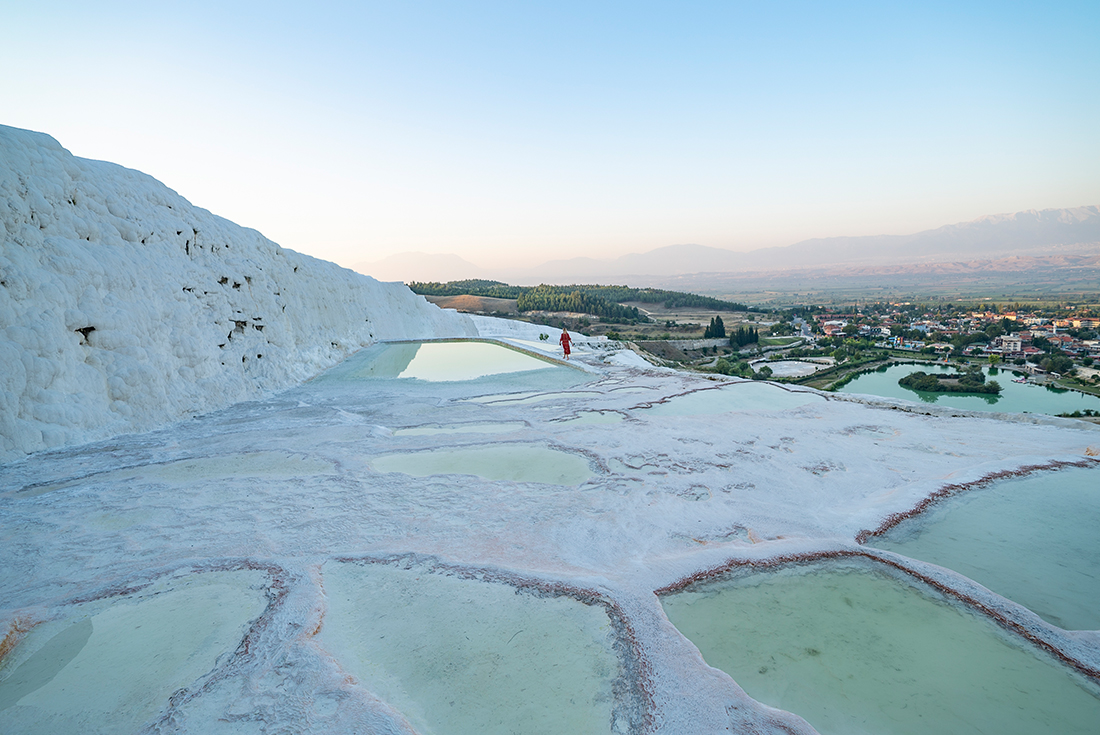 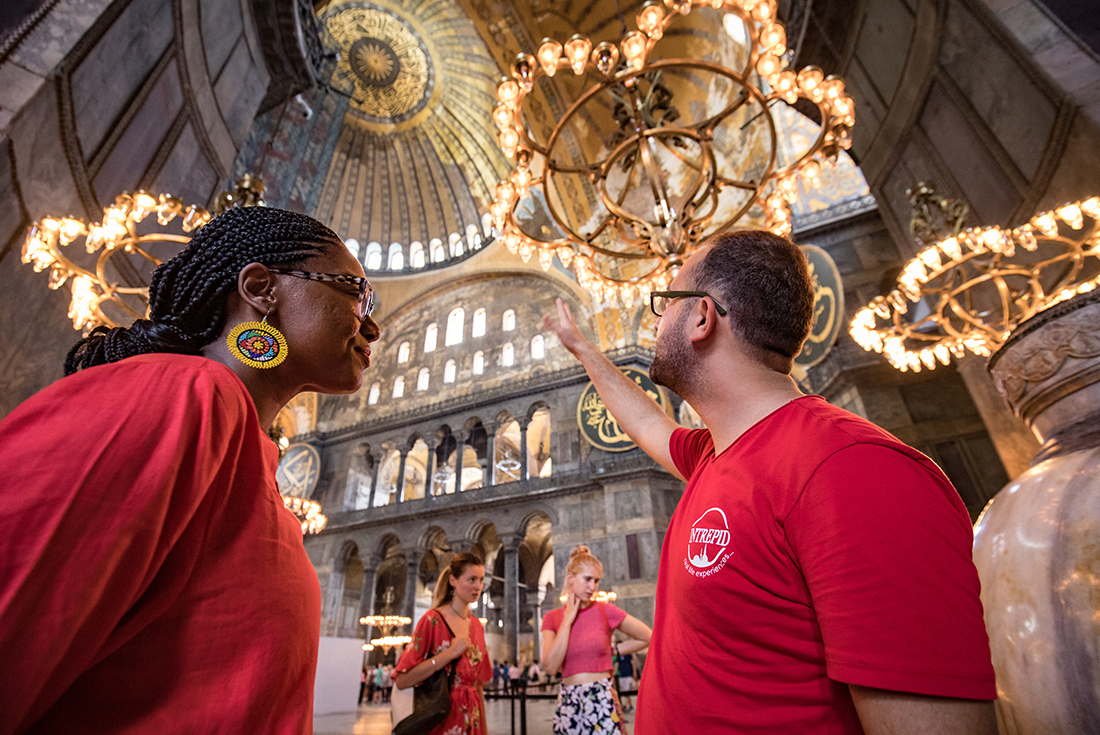 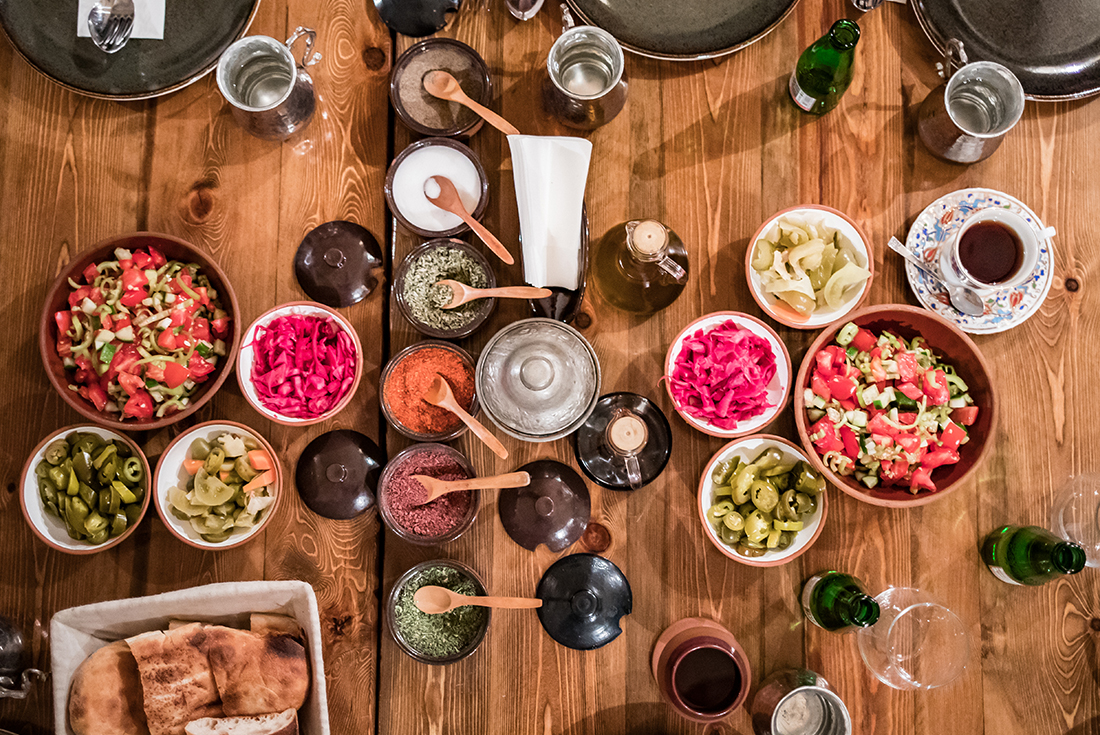 Welcome to Istanbul, the continent-straddling metropolis that the Greeks, Romans, Byzantines, and Ottomans have all once called home. Enjoy a complimentary transfer to your hotel from the airport. You’re never far from a great meal in Istanbul, so if you arrive early be sure to grab some lunch at one of the city’s many eateries. Your Intrepid Premium adventure then begins with a welcome meeting at 1 pm. After the meeting, head out with your Intrepid local leader and small group to explore the Old City of Istanbul. Your knowledgeable leader will introduce you to some of the historical treasures of the city, including the dazzling Blue Mosque, the ancient Hippodrome, and the Million - a stone road marker in use since the fourth century. This evening get to know your fellow travellers over dinner at a stylish restaurant where local delicacies are paired with panoramic views of the Bosphorus.

Rise and shine for an early breakfast, then begin the drive to Çanakkale, a port city located on the shores of the Dardanelles. Arrive in time to buy yourself some lunch, then head to the Gallipoli Peninsula. Thousands from across the world make the journey here each year to pay respect to those who lost their lives in the battles of 1915. Tour the former battlefields and find remnants of trenches used by the Turkish soldiers. Head up to the memorials of Lone Pine and Chunuk Bair while your leader explains the significance of the events that took place across the landscape. Look down upon the rough hills and gullies that became the graveyard for so many thousands of young men on both sides. After a day that will no doubt be full of sombre reflection, the evening is free for you to do as you wish in Canakkale.

Drive to Selcuk with a stop en route in Troy, where history and mythology sit side by side. Your leader will take you around the ancient city walls, and there will be time for a photo op with a replica Trojan horse. Learn how the site has confounded historians and archaeologists, then continue to Selcuk. This afternoon you’re in for an extraordinary treat - meet a local chef (who has appeared on the BBC!) for a Turkish cooking class, using olive oil grown and made on site as well as herbs and vegetables picked fresh from the garden. If you’re just eating Turkish food in restaurants, you’re only getting half the story. Learn how to make a range of small meze dishes using seasonal ingredients. Enjoy the fruits of your labour as this evening’s dinner will be the mouth-watering meze plates you’ve made together.

This morning join your leader for an orientation walk around Selcuk, a sprawling town lying at the base of the ancient Aysoluk Hill fortress. Visit the last remaining column of the Temple of Artemis, the ancient aqueducts and the 14th-century Isabey Mosque. In the afternoon, visit one of the best-preserved classical cities in the eastern Mediterranean and arguably the greatest Greco-Roman site in the world – Ephesus. Learn from your leader what life here was like as you tour the amphitheatre, stroll the marble streets once walked by Cleopatra and Mark Antony and marvel at the gymnasium, baths and restored Library of Celsus. Later, drive past apple and peach orchards to the quaint village of Sirence, where charming red-roofed houses clamber up the hillside. Drop by a local wine house where you’ll enjoy a tasting of the locally produced fruit wines. Try a sip of kiwi, pear, peach, quince or all of the above!

After breakfast this morning, travel to the town of Pamukkale. Named after its incredible travertine terraces, Pamukkale means “cotton castle” in Turkish. This magical and spectacular natural phenomenon was created by deposits from thermal waters that cascaded down the mountainside over hundreds of years, forming a collection of pools and terraces. As the water overflows, dazzling cream-coloured stalactites are formed that, from afar, resemble cotton or snow. The pools are filled with waters that many believe have healing properties for circulation and the digestive system. But that’s not all this site has to offer - head up to the ruins of Hierapolis, an important Roman bath centre founded by the King of Pergamon in 190 BC, where your leader will bring history to life and guide you through an ancient temple, holy area, monumental fountain, bath, basilica, necropolis and an impressive theatre. Enjoy a free evening in Pamukkale.

Make the journey to the coast, with a stop en route at the ghost village of Kayakoy. Abandoned after WWI and the collapse of the Ottoman Empire, this once-thriving village now lies as a sombre reminder of the human cost of war and politics. Spend some time on the eerie streets, then continue to Kas (which means eyebrow in Turkish) and begin exploring on a walking tour. Now primarily a holiday town, Kas is strewn with the remains of Lycian tombs, iconic white-washed walls covered with climbing bougainvillea and an ancient theatre where you can watch a spectacular sunset. The walk is sure to inspire your appetite and your leader will be on hand to show you where to grab a great gozleme (stuffed Turkish flatbread). The rest of the afternoon is free to enjoy this easy-going town, perhaps sit back with a pomegranate cocktail or check out the local markets.

Set off for an experience like no other - a magical boat cruise around the islands with two local guides, Mehmet and Sebahat. The married couple use their special knowledge and love of the local waters to share a distinctly traditional way of cruising and eating with travellers. Cruise to their home village of Ucagiz, then on to the village of Simena, where its friendly inhabitants sell ice cream in front of bougainvillea covered houses. On board you’ll enjoy a range of freshly prepared local greens, zucchini fritters and maybe even some Turkish raki. Sail from large bays to protected inlets where you can cool off with a swim in turquoise waters. Kick back with a cold beer or learn how to play backgammon, Turkey’s most beloved game. Look out for the ruins of an ancient city submerged under the clear water. Return to Kas for an evening at your leisure.

Travel from Kas to a lesser-known treasure - the archaeological site of Sagalassos. Set on the slopes of the Taurus mountains, the views from the site certainly deserve attention, but the ancient ruins are even more memorable. Enjoy a guided visit through agoras, a Roman bath complex, an intricately decorated fountain and a theatre, and learn what life looked like set against this remarkable backdrop. If time permits, you may have the chance to visit a workshop where local women have revived traditional tile-making techniques. Continue on a scenic drive to Antalya. Your accommodation is tucked away in Kaleici (the Old City) so settle in on arrival and then head out on an early evening walk to see Hadrians Gate, the Old Roman Harbour and plenty of photo-worthy views. Soak up the city’s Mediterranean atmosphere and attitude over a fresh seafood dinner – your leader can recommend some superb spots for eating.

Wake up in beautiful Antalya and start your day with a guided visit though the Antalya Museum. The province of Antalya includes dozens of important ancient Hellenistic and Roman cities, and some of the best artefacts are on display in the museum’s 13 exhibition halls and open-air gallery. Your afternoon is free to spend as you wish. Maybe wander the narrow cobblestoned streets of Kaleici with an ice cream in hand, beat the heat with a dip in the sea, chill out poolside or take an optional visit to the ancient cities of Side, Perge or Apsendos. Be sure to speak to your leader for details on these optional activities.

Say goodbye to Antalya and take a morning drive to Konya, an ancient city important in the Roman era where the Sufi practice of 'whirling' was born. On arrival, discover the mystic resting place of Mevlana Celaleddin-i Rumi, the 13th-century mystic, poet and theologian whose teachings continue to inspire and influence Muslims around the world. Visit the small museum dedicated to his life and work. The rest of the day is free for you to get to know the city. Konya offers up a wealth of museums, mosques and monuments worth visiting so be sure to ask your leader for recommendations. For a leisurely afternoon, head to Alaeddin Hill, where locals sip coffee, eat pastries and let the hours slip calmly by.

Depart from Konya and travel to Cappadocia, where on arrival your leader will take you on an orientation walk to get to know your new otherworldly surroundings. Check in to your feature stay accommodation and discover something truly special. Feel miles away from the modern world in a cave hotel that looks like a page straight out of a fairy tale. Uniquely beautiful rooms are carved into stone and feature elegant décor with modern conveniences. The rooftop terrace boasts one in a million views of Cappadocia’s incredible landscape and basalt chimneys – keep an eye out for hot air balloons passing overhead. Head out for a drink with a view and watch the sun set over one of the world’s most enchanting places. The rest of the evening is free for you to take it all in, or perhaps watch a performance of whirling by local Dervishes in a restored han (caravansary).

Early birds have the option of taking a hot air balloon over the ethereal Cappadocian landscape. The scene at sunrise is sure to take your breath away. After a relaxing breakfast overlooking the valley, step back in time with a visit to the Goreme Open Air Museum. See the incredible houses, churches and monasteries carved out of the soft cliff face as your leader shares stories of the civilisations who lived here. Next up visit a carpet weaving co-operative that empowers women by giving them the tools to produce one-of-a-kind traditional rugs. Hear local insight on the history of traditional carpet weaving and see how the intricate pieces are made. Later in the afternoon, go on a short walk through the cheekily named 'Love Valley' which is famous for its phallic rock formations. Then head back to your hotel in Goreme. Perhaps take an optional Turkish bath to unwind at the end of the day. 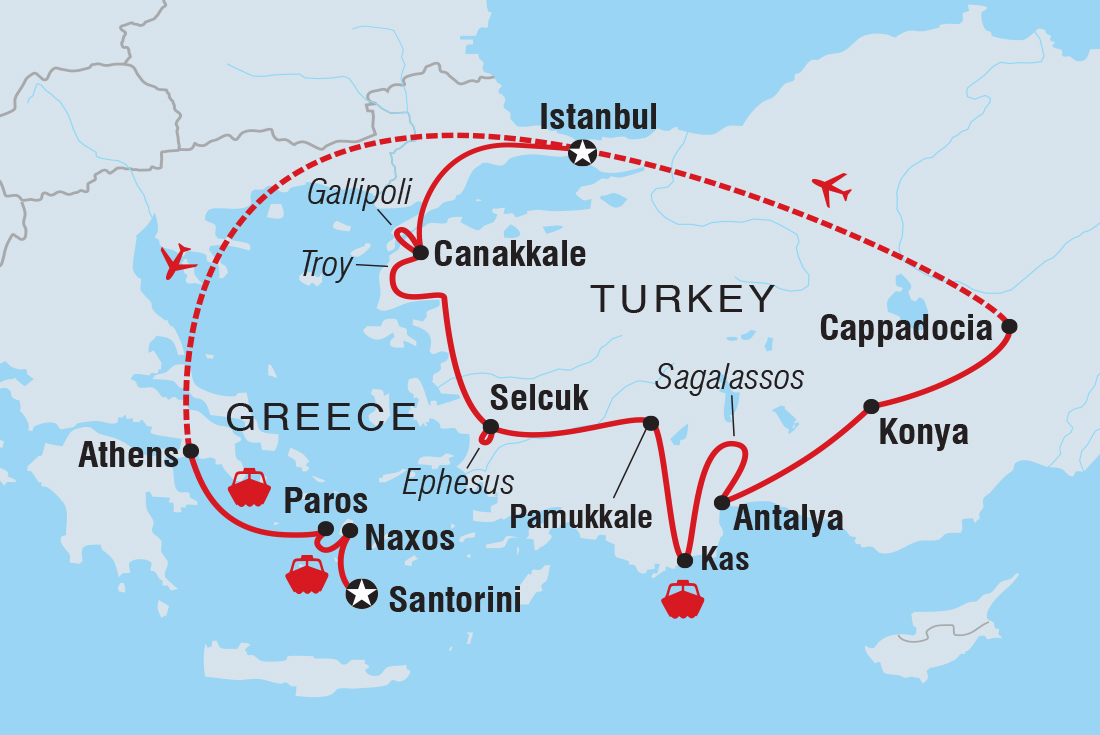