Discover the beauty in buildings that lie across the north of India, from Jaipur’s Amber Fort and Royal City Palace to Agra’s Red Fort and iconic Taj Mahal.. Taste the best of Indian cuisine during a welcome dinner at one of Delhi’s oldest restaurants, a street food tour with a local expert in Agra and a wonderful meal in the home of a Brahmin family in Jaipur.. Embark on both morning and sunset safaris through Ranthambore National Park in search of antelope, sloth bears, leopards and the elusive tigers that call this park home.. Spend two elegant evenings at your feature stay hotel in Jaipur. The heritage hotel has been in the same family since its opening in 1928 and offers opulent details and warm, friendly service.

Welcome to northern India, where ancient religion, cultural heritage and wild wonders are laced through the country’s modern facade. On this 10-day Premium adventure you’ll discover the Pink City of Jaipur, witness the Mughal splendours of Delhi and Agra, safari through Ranthambhore National Park in search of tigers and soak up the ambience of holy Varanasi on a sunrise cruise. A local leader will bring the magic of India to light, from lavish palaces to vibrant bazaars and the incomparable Taj Mahal. Packed with hotspots and hidden gems, discover the cultural heart of India. 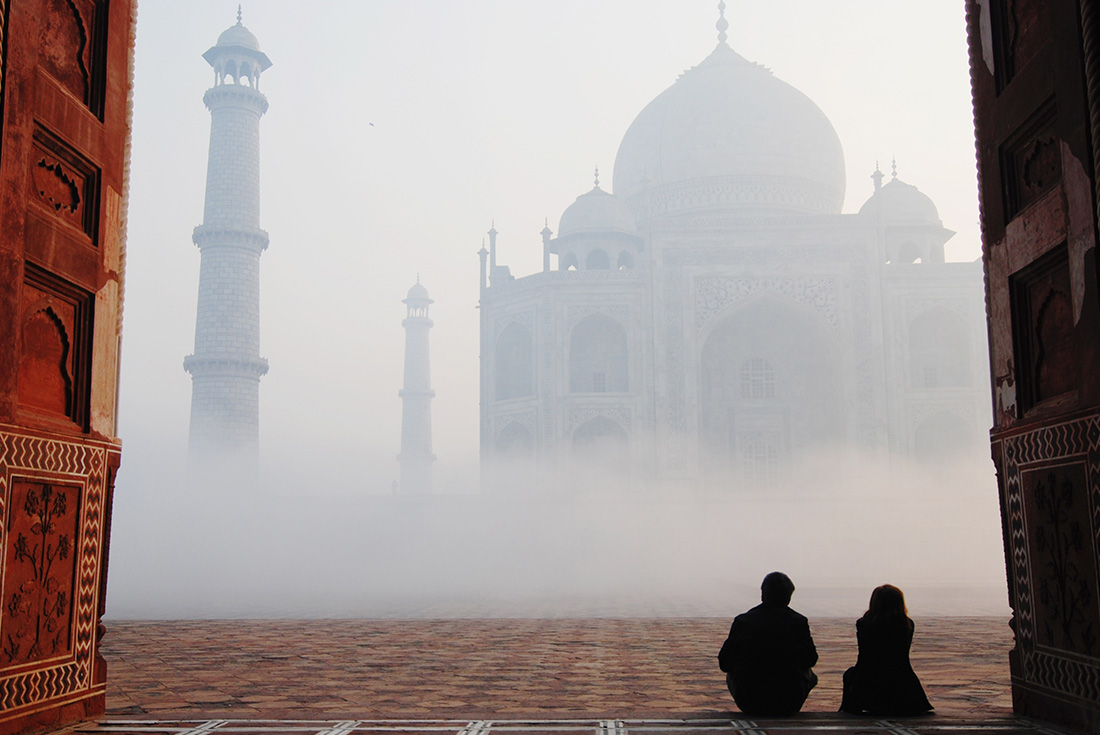 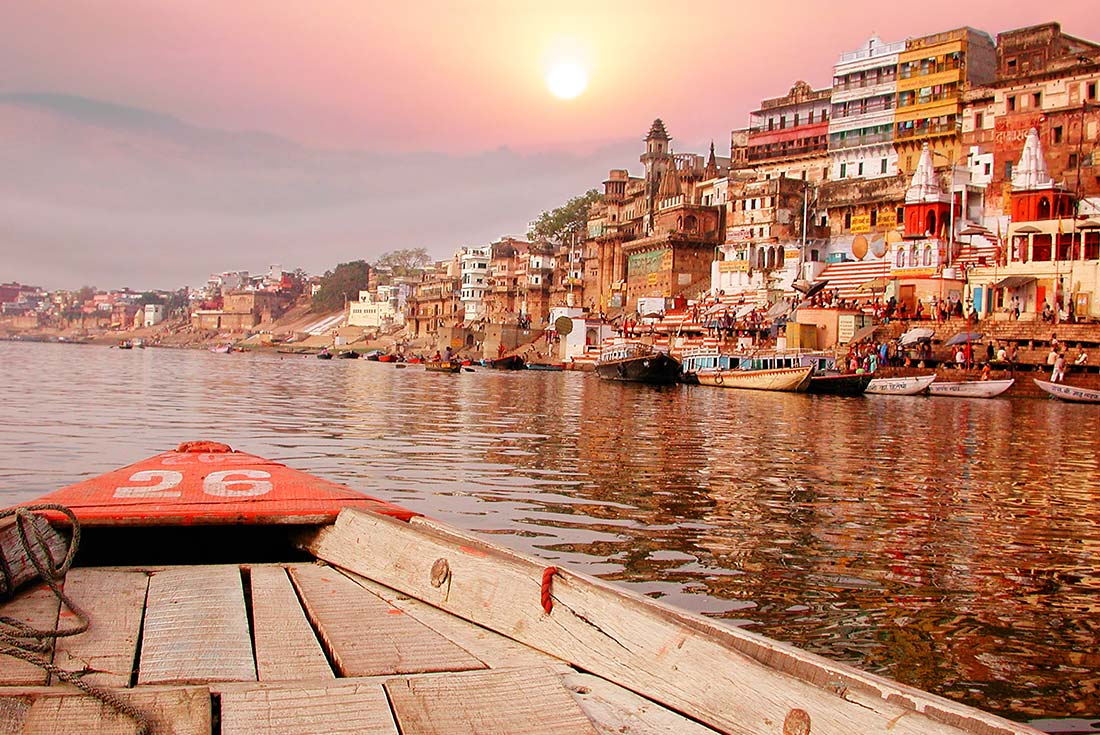 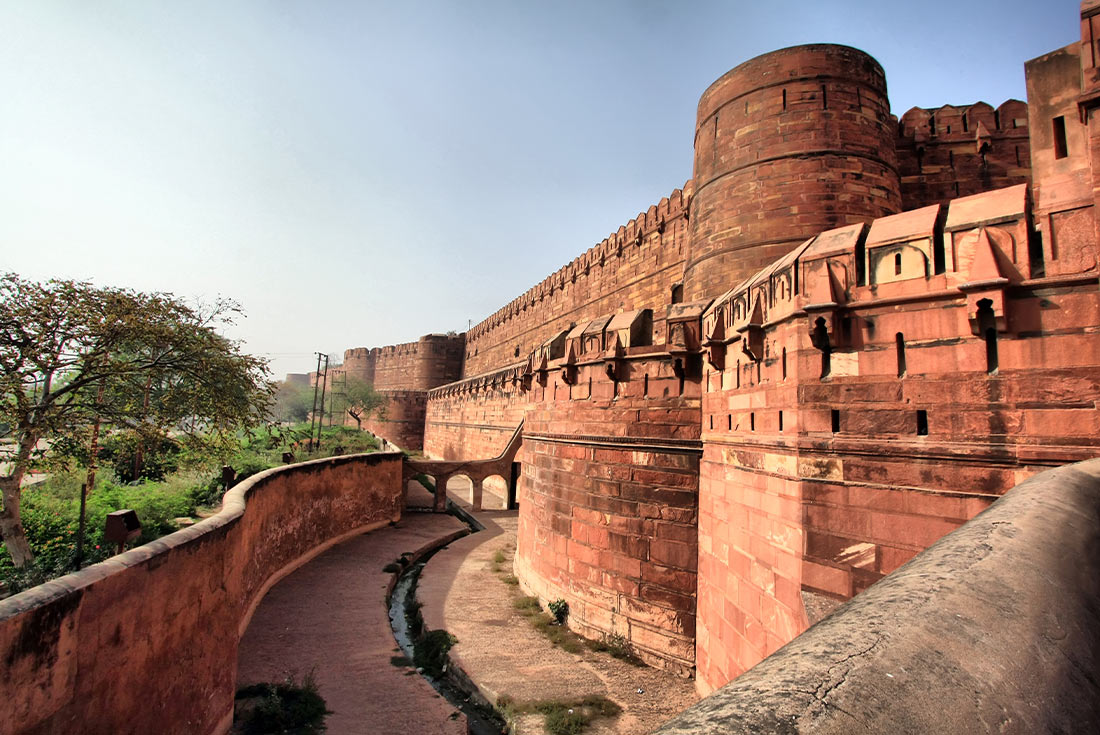 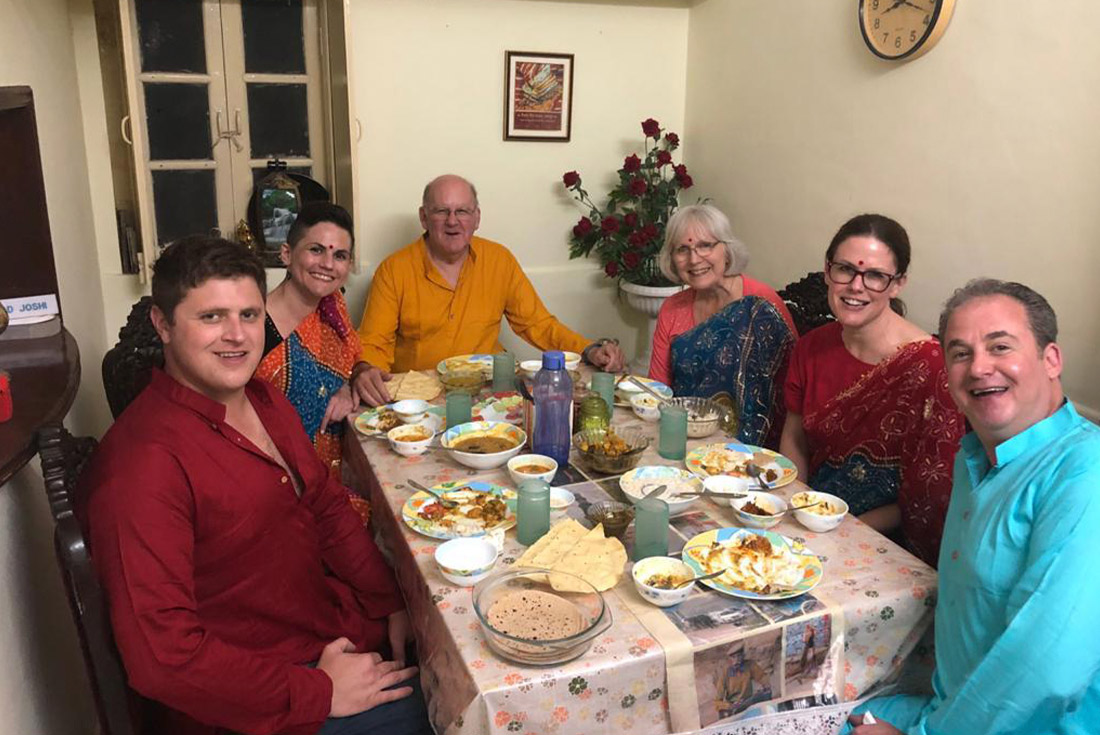 Welcome to India! On arrival at Delhi Airport, you will be collected and transferred to your hotel. This evening, there will be an important welcome meeting in the hotel at around 6 pm to meet your local leader and fellow group of travellers. Until then, you can use any time before the meeting to explore this excitingly chaotic capital city. Filled with historical sites from different eras, museums, galleries and endless bazaars, there’s plenty to see in Delhi. After your welcome meeting, join your leader and small group for dinner at one of Delhi’s oldest restaurants that has been delighting visitors for more than 80 years. The iconic restaurant is credited with introducing India to ice cream and fine dining. Tonight your leader will introduce you to the exciting world of Indian cuisine. Perhaps start out with some classic dishes like mutton rogan josh and paneer tikka.

Today, make the drive to Agra. Once arrived, take some time to settle in to your hotel then head out to visit India's most iconic structure at sunset – the spectacular Taj Mahal. Best known as a monument to love and loss, the 17th-century Taj was built by Emperor Shah Jahan as a tomb for his second wife and is a beautiful example of Mughal architecture, surrounded by trimmed English gardens. Meet with a Taj Mahal guide who will illuminate the fascinating history of this world-famous building as you tour it at sunset. Beyond its most famous structure, Agra also boasts a marvellous food scene. This evening, a local expert will join you on a street food tour away from the main tourist trail and help you understand Agra’s cuisine and culture. Stop by a 19th-century shop serving up age-old recipes from the Braj region of India, and visit hyperlocal eateries most visitors to Agra never see. Pass by the incredible Jama Masjid of Agra, one of the largest mosques in India.

Start the day with a visit to one of the finest looking forts in India – the magnificent Agra Fort. Learn how a fortress and prison was built out of red sandstone by Akbar in 1565, then conversions and additions by Shah Jahan transformed the fort into a palace. Explore elegant courtyards and a labyrinth of buildings while you try to take in the grand scale of this remarkable structure. After your visit, depart Agra and make your way to Ranthambore, arriving in the late afternoon. On arrival, you may like to take a stroll around town, put your feet up and relax beside the pool, or enjoy a meal at the onsite restaurant.

Rise early for a morning safari. Ranthambore National Park is one of the original Project Tiger reserves – a place where nature has reclaimed ancient fortresses and temples and is teeming with wildlife. In 4WD safari vehicles, take game drives to search for animals, including the majestic tiger which stalks through the jungle. Even if they are too stealthy to see, the park is filled with other animals like gazelle, hyenas, sloth bears, crocodiles, jackals, three types of antelope (nilgai, sambar and chital) and leopards to watch out for. Enjoy some downtime at the resort in the afternoon, then venture back out for an evening safari through the park – another chance to spot some of this region’s resident tiger population. You may also have the opportunity to explore the 1000-year-old Ranthambore Fort, where two pavilions that have survived the ravages of war and time, Badal Mahal and Hammirs Court, give an idea of its old grandeur.

Today you will travel to Jaipur, the capital of the Rajasthan region. Arrive at your feature stay accommodation, the fabulous Hotel Narain Niwas Palace. This beautiful heritage hotel has been run by the same family since its opening in 1928 and retains the warm feel of a traditional family home, while opulent touches emanate from every corner – look out for delectable chandeliers, stained glass windows and peacocks roaming the grounds. Surrounded by a glittering swimming pool and lush gardens, you’ll enjoy a magical escape from the rush and racket of the outside world. Take some time to settle in, then join your leader on a walking tour through the crowded streets packed with cars, camel carts, rickshaws, trucks and bicycles, past traditionally dressed Rajput men wearing colourful turbans and sporting magnificent moustaches. Hear stories of the city’s culture and history as you explore crowded bazaars filled with handcrafted textiles, folk art, and the local speciality of semi-precious stones. Dinner this evening is something a little bit special – head to the home of a local Brahmin family for a wonderful homecooked dinner. Chat to your friendly hosts about their way of life and learn their culinary secrets – Brahmin dishes exclude onion and garlic, but you’ll discover their food is still bursting with flavour.

Begin the day with a visit to the extravagant Amber Fort – the jewel of Jaipur. It is quite a sight, with its soft shades of red, sandstone and white marble with elaborate Hindu-style flourishes. Your leader will share the stories of a fallen empire as you explore ornate rooms, lavish murals, frescoed arches and delicate jali work. Afterwards, stop at one of India's most photographed buildings, the Hawa Mahal or 'Palace of the Winds', to capture your own photo. Then pay a visit to the striking City Palace, a marvellous blend of Rajput and Mughal architecture. Tour the grounds and learn about its construction by the founder of Jaipur. Later in the afternoon, hop on a rickshaw and travel to a royal haveli. Haveli’s are old mansions which were ornately decorated as a display of wealth, many of which remain across the city today. Here you will meet the owner of the haveli who will give you a tour of the property and share fascinating photographs and stories of his ancestors who once ruled the nearby provinces. Head to the rooftop for drinks and take in sweeping views of Jaipur’s old walled city.

Enjoy a relaxing morning at your feature stay accommodation then board a midday flight bound for Varanasi. On arrival, make a stop off at Sarnath, one of the four main Buddhist pilgrimage destinations. The site is where Buddha preached his message of the path to enlightenment and features a number of stupas and museums to explore. Continue on to the city of Varanasi. Awash with shrines and temples, it is the ultimate destination for Hindu pilgrims who travel from far and wide to experience the city’s spirituality. Varanasi may not be known for its cleanliness, but there’s no denying it is one of India’s most inspiring places.

Today starts early with a sunrise boat ride on the Ganges. Your leader will explain the significance of India’s most sacred river as pass by the many ghats and temples along its banks. Then, join your leader for a walking tour of the Old City and uncover its secrets as you walk through narrow laneways packed with stalls and shops, past the dhobi wallahs, burning ghats, and the endless temples that echo with bells and the pungent aroma of incense. In the evening, return to the Ganges to see it from another perspective during a sunset cruise. You will be joined by local musicians on board and watch a beautiful flower and candle ceremony take place – an experience that is sure to be etched on your memory long after your time in India is over. Witness pilgrims performing ancient bathing rituals and ceremonies as the sun sets over this sacred city.

Depart Varanasi and catch a morning flight to Delhi. In the afternoon, get a real taste of the city during a tour with your leader. Navigate the city’s metro system and arrive in Old Delhi where you’ll wind through its lanes and markets. It’s not the real Delhi without a traffic jam so hop aboard a traditional rickshaw and weave your way around the streets surrounding the Chandni Chowk marketplace. Stop by India’s oldest and largest mosque, the Jama Masjid, then head into the Sikh temple of Sheeshganj Gurudwara for a moment of peace and to observe the spiritual side of this bustling metropolis. The rest of the afternoon is free for further explorations, then come back together in the evening for a final dinner as a group. This last meal will take place in a beautiful haveli dating back to 1887. Enjoy a feast of Mughlai cuisine, street food dishes and kebabs in a stunning historical setting – a perfect finale to your Indian adventure.

Your journey comes to an end after breakfast. For those who wish to stay on in Delhi to further explore the city, we are happy to help in booking accommodation (subject to availability). Perhaps pre-book an Urban Adventure and let a local show you more of this mega city. 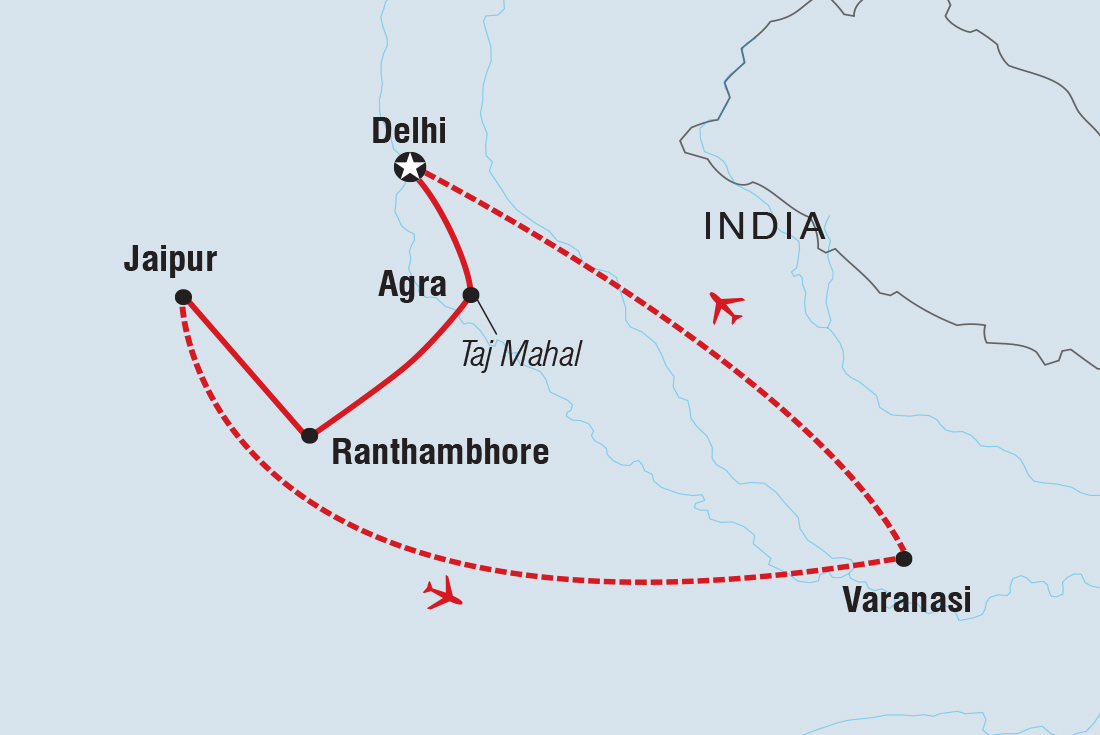