Discover the man-made beauty that lies across the north of India – from Jaipur’s ‘Palace of the Winds’ and Royal City Palace, Agra’s Red Fort and iconic Taj Mahal, to the carved steps leading down to the river in Varanasi. The magical splendour of the Taj Mahal is a must-see on any North Indian odyssey. Enjoy a guided exploration of this immaculate icon. Here’s what you need to know before your visit: https://www.intrepidtravel.com/adventures/taj-mahal-travel-guide/. Be immersed in the spirituality of India – the Jama Masjid mosque in Delhi, the ghats of Varanasi, Kama Sutra carved temples and Buddhist pilgrimage sites; evening prayer ceremonies, ancient bathing rituals and candle flower ceremonies on the Ganges. Feel the magic of India that runs through everything, from a throbbing bazaar to a packed cinema showing a Bollywood blockbuster 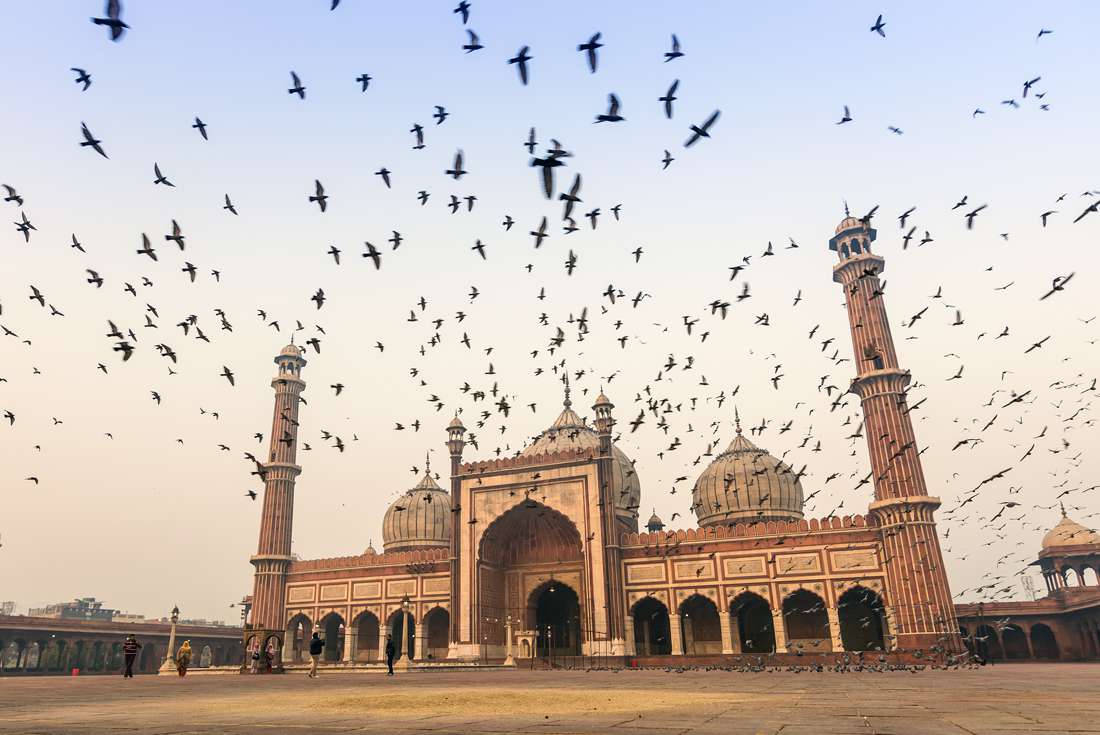 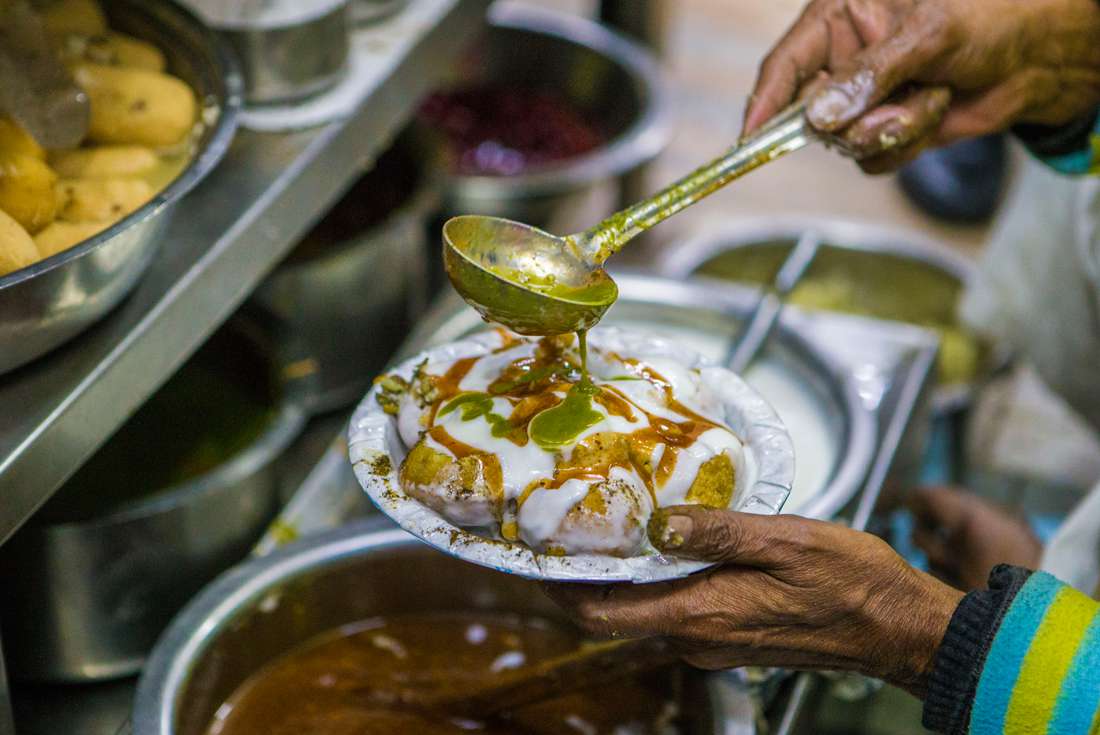 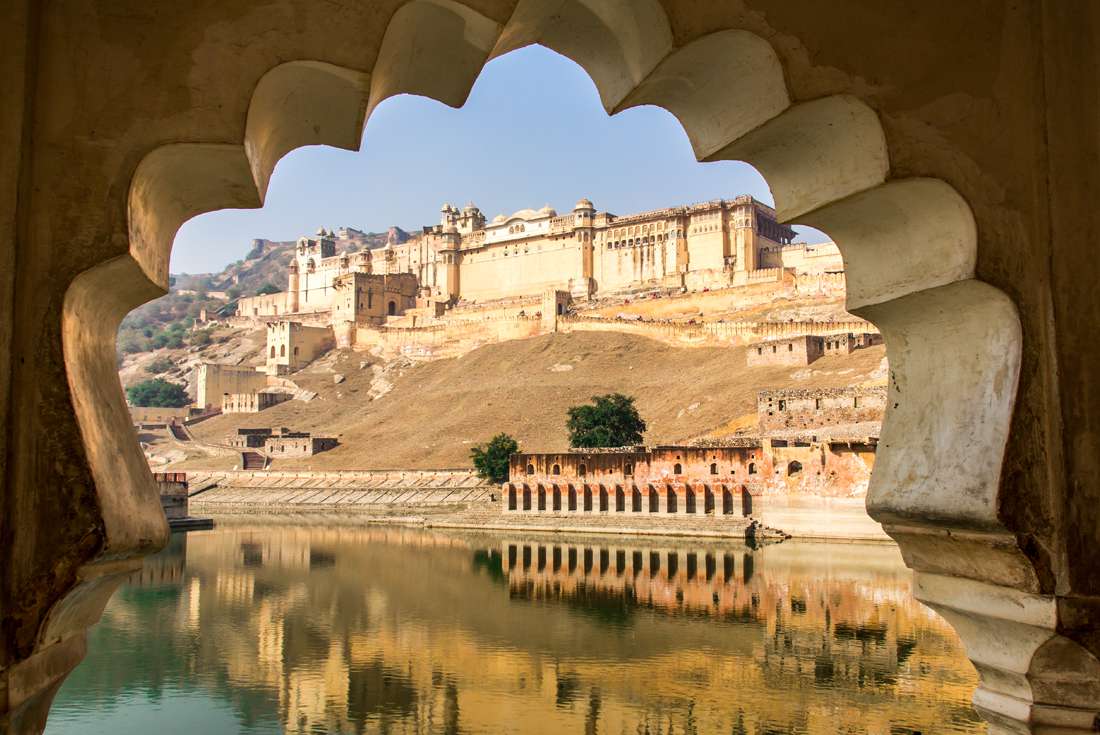 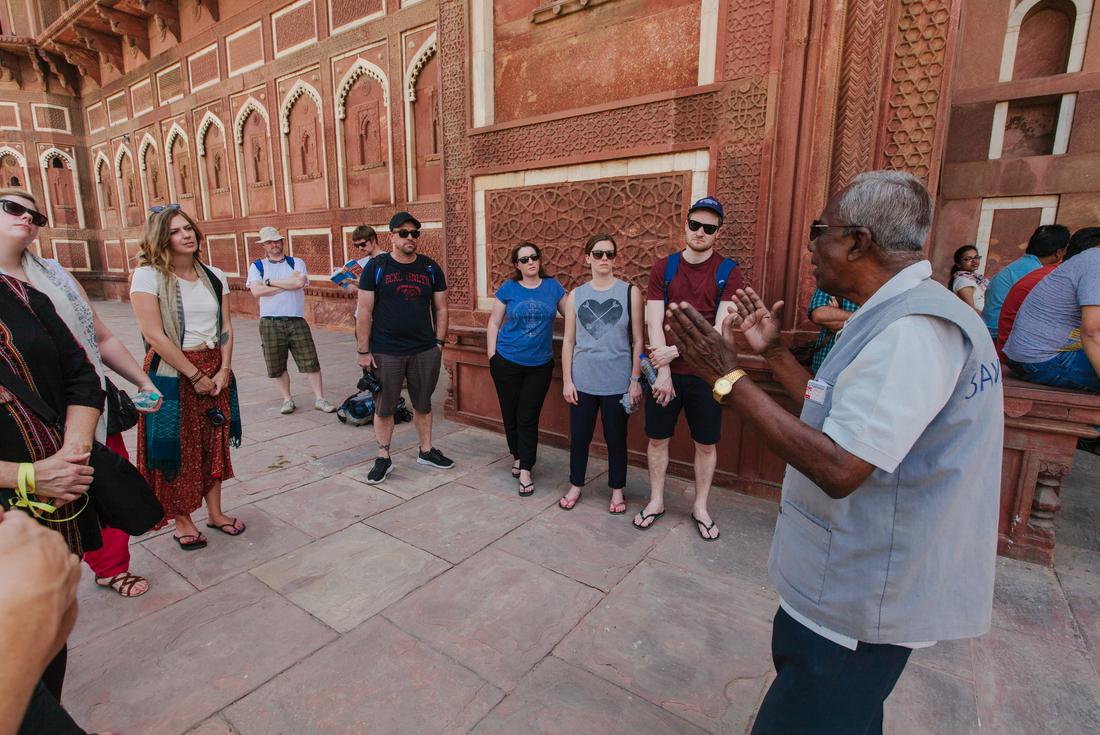 Welcome to India. Arrive in Delhi and take your complimentary airport transfer to the hotel. You adventure begins with a welcome meeting at 6 pm where you'll meet your tour leader and fellow travellers. If you arrive early, make sure to get out and explore this exciting capital. Filled with historical sites from different eras, museums and galleries, shops and endless bazaars, there’s much to see and do.

After breakfast, your tour leader will take you to the city’s historic heart with a guided walking tour of Old Delhi. Set off on the city's modern metro system, then get a taste of India's famed public transport with an optional cycle rickshaw ride through chaotic streets, such as the famous Chandni Chowk. Make a visit to the Jama Masjid, Delhi's oldest mosque and one of its most impressive buildings, then visit the Sheeshganj Gurudwara (Sikh Temple) to learn about the Sikh religion. The rest of the day is free for further exploration or maybe to join an Urban Adventure (booked locally). Perhaps visit the World Heritage-listed Mughal masterpiece of Humayun's Tomb, the first garden tomb in India, built in 1570. Wonder at the tall brick minaret of Qutub Minar, which was started all the way back in the 12th-century, or explore the mighty Red Fort of Delhi. Part palace and part fort, it played an integral part in the history of the city with former residents ranging from royal families to British soldiers.

Head to Jaipur, Rajasthan's capital, by private vehicle (approximately 6 hours). Get your first glimpse of the Pink City and its trademark building colour on a walking tour. Navigate crowded streets packed with cars, camel carts, rickshaws, trucks, and bicycles, past traditionally dressed Rajput men wearing colourful turbans and sporting magnificent moustaches, while observing the city’s intricate architecture. Visit a bazaar to browse handcrafted textiles, folk art, and the local specialty of semi-precious stones. Make a photo stop at India's most photographed building after the Taj Mahal, the Hawa Mahal or 'Palace of the Winds'. You have the option of also visiting Jantar Mantar, an observatory filled with instruments to track the stars, built by the founder of Jaipur, Maharaja Jai Singh. This evening, continue to indulge in the wonders of Indian culture by watching a Bollywood blockbuster Cinema – an elaborate combination of action romance, drama and music – at the spectacular Raj Mandir

An optional early morning hot air balloon experience won’t disappoint – wake early for a breathtaking overhead view of the Pink City bathed in early morning light. (For additional information about this optional excursion, please see the important notes section of your trip notes). Later, climb the twisting roads of the Aravalli Hills and round the final bend to see the massive Amber Fort loom into view. The legacy of a fallen empire, the opulent palace is a superb example of Rajput architecture and is packed with elaborate rooms of lavish murals, frescoed arches and delicate jali work. Don’t miss the sparkling Mirror Palace, covered floor-to-ceiling in thousands of reflective tiles, the hall becomes a dazzling fantasy with the light of a single match. The rest of the day is free to explore more of Jaipur that you might have missed yesterday.

Today starts early with a sunrise boat ride on the Ganges, where you can watch the light gradually illuminate the many ghats and temples along the river as you pass. There is an option to take a trip to nearby Sarnath, one of the four main Buddhist pilgrimage destinations. The site is where Buddha preached his message of the path to enlightenment and features a number of stupas and museums to explore. Alternatively the day can be spent exploring the laneways and alleys behind the ghats, or picking up some examples of the excellent local silk industry. Perhaps witness pilgrims performing ancient bathing rituals and ceremonies as your time in this sacred city comes to an end.

Today, take an included transfer to Delhi airport for a flight bound for Kathmandu. Please note that this flight is unaccompanied. On arrival in Kathmandu, you’ll be met at the airport by our representative and transferred to your hotel. In the late afternoon, there will be a group briefing with your leader to discuss the next stage of your adventure. The evening is free to explore the streets of Kathmandu – a mix of ancient architecture and modern development, and rich artistic and cultural heritage. Crowded markets and bazaars are the centre of Nepali life and the narrow streets are home to holy men, monks, bicycles, incense, goats and sacred cows. Your leader will usually organise an optional dinner at one of Kathmandu’s fine Nepali restaurants.

Weather permitting, take a Mount Everest scenic flight this morning. This amazing experience will take you over Sagamartha National Park, through a crescendo of the highest peaks in the world, climaxing by getting up close to Mount Everest. Later in the morning you will explore Kathmandu on an organised sightseeing tour. You will visit Bodhnath Stupa, one of the biggest Buddhist shrines in the world, where you can observe Buddhist monks in prayer in the monasteries surrounding the stupa. You will also visit Pashupatinath, the most famous Hindu temple in the country, located on the banks of the holy Bagmati River. Here you will see Hindu holy men (sadhus) meditating, pilgrims bathing, and occasionally funeral pyres burning on the ghats. The rest of your afternoon in Kathmandu is free for further sightseeing and exploration. Perhaps head out into Durbar Square, in front of the old royal palace and home to numerous beautiful temples, and browse the stalls of merchant's wares.

Today you will have an early departure from the hotel for your transfer to the domestic terminal at Kathmandu's Tribhuvan Airport. From here you will fly to Pokhara, with a flight time of about 30 minutes. There are often spectacular views of the main Himalayan chain to the north on this flight. On arrival you will take a boat ride across the lake (Phewa Tal), which is the second largest in Nepal. Visit the Peace Pagoda, where spectacular views of the mountains await. You can see the Annapurnas from here, and the famous fishtail peak, Machhapuchhare, and back across to Pokhara. You will also visit the fascinating International Mountain Museum to learn some amazing tales of past climbing expeditions – some ending in triumph, some ending in tragedy.

Enjoy a free day for further exploration in the peaceful surroundings of Pokhara. Your leader can advise you of sightseeing opportunities. It is worth taking a boat for a row out on the lake, especially if the weather's fine. The lakeside area has great shopping opportunities and internet cafes. Pokhara has an interesting old area as well as an elaborate Hindu temple and a Buddhist monastery.