Step back in time in the Soviet time capsule that is Minsk. Marvel at Stalinist brutalist architecture from an era gone by and indulge in the culinary offerings of Belarus’ capital city. Embark on a bike ride in Belovezhskaya Pushcha National Park in search of Europe’s largest land mammal, the European bison. Stay in a traditional village with a local family and enjoy home cooked meals in a cozy environment. Spend the night inside Nesvizh Castle, a 16th-century masterpiece built by the mighty Radziwill family

Castles, cathedrals, rich forests and soviet structures – Belarus is a diamond, shining with post-war intrigue. While much of the country has been shaped in some way by conflict, the result is a modern country where Soviet, Polish, Orthodox and Jewish influences meet in each city to create architectural wonderlands. In contrast, the sprawling medieval forests of Belovezhskaya Pushcha remain unravaged by man and just as full of curious history, riddled in the growth rings of the towering ancient oak trees. From marsh to metropolis, Belarus’ appeal lies in a tranquillity that needs to be experienced firsthand before it can be fully understood. 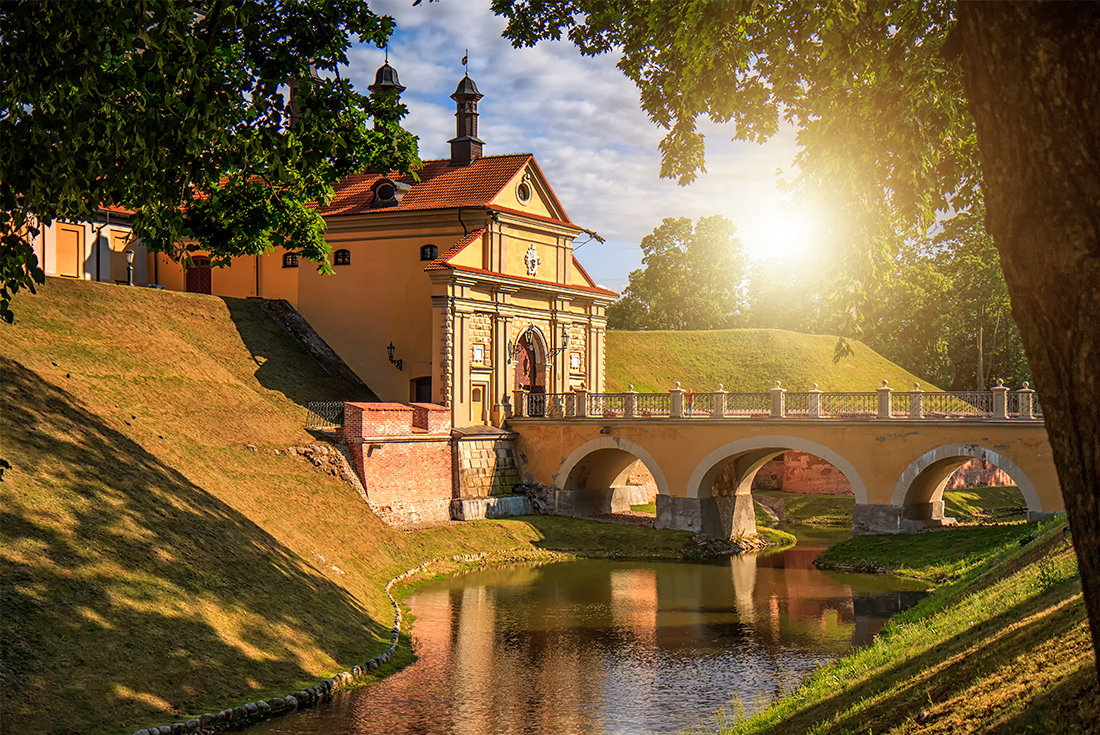 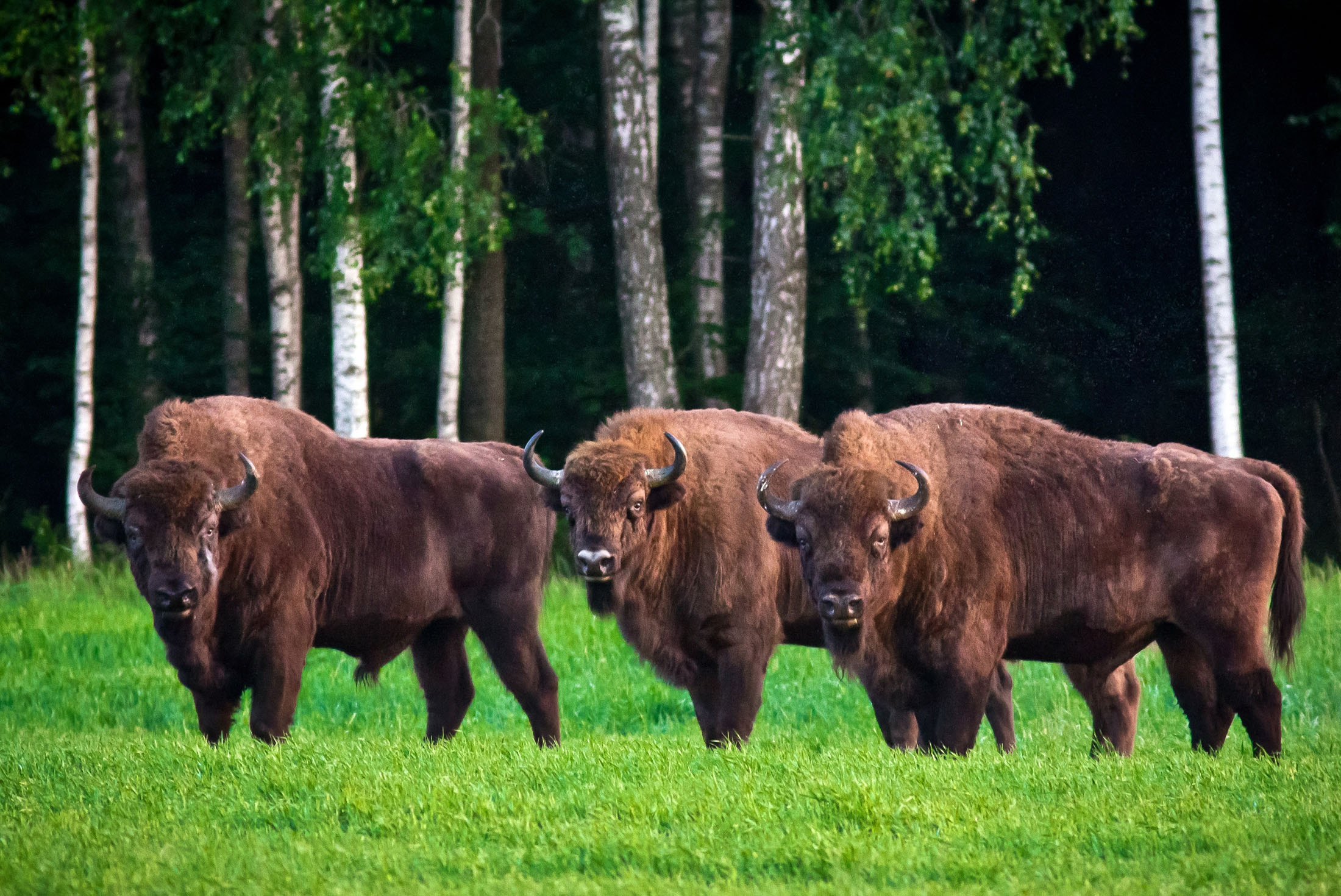 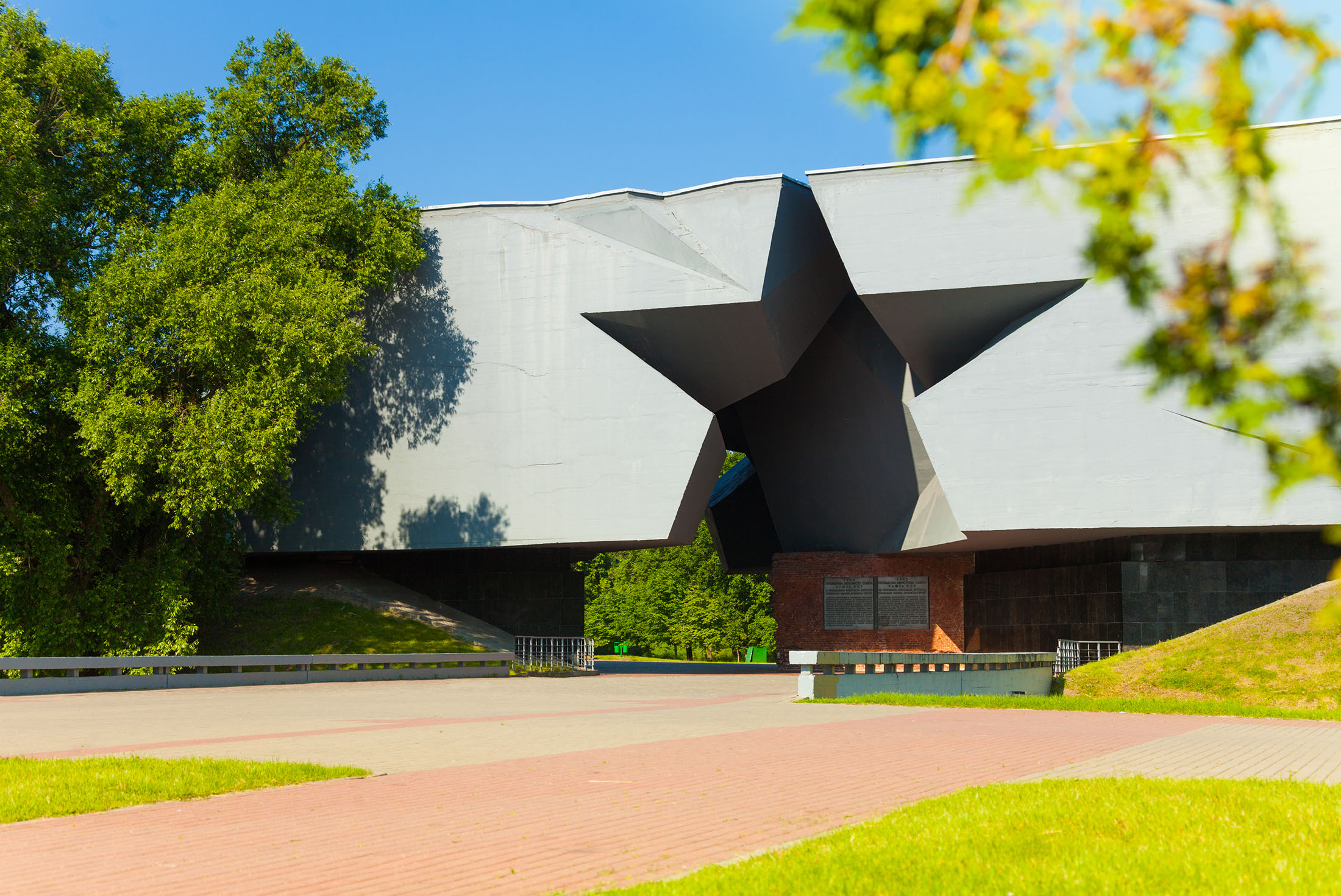 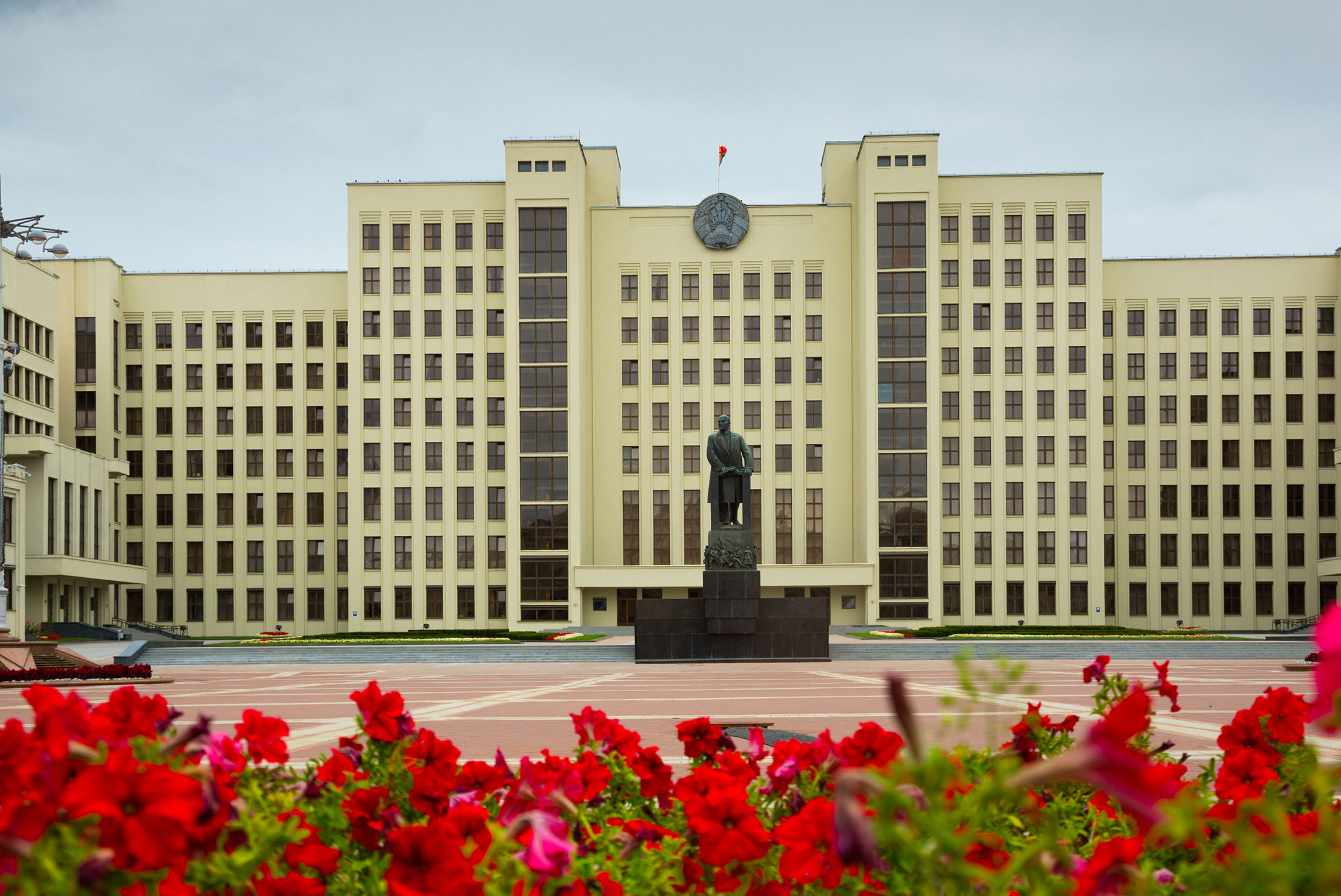 Welcome to Belarus! Your journey begins in Minsk, the capital of Belarus. 80 per cent of the city was destroyed during World War II and rebuilt with a Stalinist aesthetic, favouring grand buildings, wide avenues and sprawling squares. Time has been kind to Minsk, and while this open city plan is still prevalent, it’s currently characterised by a great mix of historical Soviet places of interest scattered around the modern cafes, restaurants and nightclubs. Do keep in mind that English is rarely spoken in Minsk – you would do well to either learn some key phrases in Russian, or keep a handbook of these phrases with you just in case you arrive early.

Three million Belarusians perished during WWII, or as it is known here, the Great Patriotic War. The Khatyn Memorial is a tribute to all the dead, though the site has a particularly sombre significance. German forces descended on the small town of Khatyn in March of 1943, following the death of a German officer in a nearby skirmish. The 149 inhabitants – including 75 children – were rounded up and murdered, and only one man survived. A bronze tribute to the survivor, Joseph Kaminsky, stands six metres tall in the centre of the complex. The 80-kilometre journey to Khatyn will take about an hour, and a guide will be waiting to escort you around the memorial upon arrival. Later, return to Minsk and continue exploring. Perhaps check out the imposing and sand coloured former KGB headquarters.

Head to Nesvizh (sometimes also spelled Niasviz) this morning in a private vehicle. Following a two-hour journey, arrive at the Nesvizh Castle, a grand palace that combines modern and classical architecture styles surrounded by manicured gardens. Your accommodation for the night will be within the halls of this crucially important castle. You’ll stay in a wing of the castle that has been converted into a hotel. There’s a restaurant on the property as well with a menu full of European cuisine should you wish to dine like a noble. You may wish to spend the afternoon wandering the grounds, pretending to be an errant royal who has escaped their dreary duties. If you would prefer to get outside the complex, there is plenty on offer in Nesvizh town. Maybe visit the Corpus Christi Church, where a rather unassuming facade hides a stunning baroque interior.

Make the 30 minute journey to 16th century UNESCO World Heritage listed Mir Castle, where you can explore the grounds that encircle this prime example of Belarusian Gothic architecture. Make sure you also check out the courtyard. If you would like to learn more about the castle perhaps visit the museum inside the castle (optional). After lunch continue on to the railway station at Baranovichy where you will board a local train to the city of Brest. Use the evening however you wish in this historic town. Perhaps check out Sovetskaya Street, a pedestrian street with plenty of little points of interest, from yellow domes to old-fashioned street lights.

This morning head straight to the pock-marked red brick fortress the town is known for. A symbol of Soviet resistance due to its service during WWII, it’s also the site of a sculpture that once topped a CNN list of world ugliest monuments. Called ‘Courage’, the artwork depicts a looming, stubborn face carved from grey rock over 30 metres (100 feet) tall. It’s undeniably impressive, though you can make up your own mind about its beauty. Enjoy a guided tour of the Brest Fortress, gaining insight into Belarusian identity and history. Enjoy some more free time in Brest, so perhaps head to the quirky Museum of Confiscated Art. In the afternoon, transfer to our home stay in a small village. You’ll be staying with our local friends in a rural setting where life has remained relatively unchanged for hundreds of years. In the evening enjoy a hearty home cooked meal that will likely include potatoes in some shape or form.

After a leisurely breakfast head to Belovezhskaya Pushcha National Park (pronounced 'beh-low-veshs-kaya push-cha') where you can survey the sprawling canopies and hidden greenery from the back of a bike. The forest is full of stunning, motionless scenery and stands as a preserved part of the UNESCO World Heritage Site Bialowieza Forest, the last primeval forest fragment of Europe’s woodlands. Many of the trees here have been standing for generations – some pines are aged around 300 years, while some of the oaks are as close as 600. Wildlife in the forest is abundant too as over 55 different species reside in the park. This includes the European bison, the continent’s largest land mammal, which was bred back from the brink of extinction through a successful zoo breeding program. Enjoy a picnic lunch and then return to the village in the afternoon. Perhaps relax in the sauna before another home cooked meal from your hosts.

A private transfer through scenic forested countryside will deliver you in Grodno (approx. 3 hours). One of the few Belarusian cities that avoided bombing during World War II, Grodno (sometimes also spelled Hrodna) is full of pre-war architecture, giving it the feel of a ‘big village’ despite being one of the country’s major cities. Begin your explorations with an orientation walk around town. From the cyan spires of St. Francis Xavier Cathedral to the golden towers of the Bridgettine Convent, Grodno’s mix of medieval and baroque buildings scattered across the city means a surprise could lurk around every corner. Spend the afternoon at your own pace. Perhaps ask your leader where you can grab a draniki (stuffed potato pancakes), and don't miss checking out the interesting looking facade of the drama theatre.

Spend the morning at your own pace. Don't miss checking out the interesting looking facade of the drama theatre, and make sure you visit both the old and the new castle. The Great Choral Synagogue is just opposite. Return to Minsk by public bus in the afternoon. Arrive in the evening and do as you please in Minsk. As tonight is the last night of the trip, maybe head out with your fellow travellers for a final dinner at one of the cozy restaurants across the river in the Trinity Hill area, the oldest surviving suburb in Minsk. It’s a leafy, picturesque part of town that lies on the bank of the Svisloch River.

Your Belarusian romp comes to an end after breakfast this morning. Minsk has a lot to offer so it is recommended you extend your stay in this fascinating city. There are tonnes of optional activities on offer, from churches galore to the National Arts Museum. We'll be happy to book additional accommodation for you (subject to availability).