Skirting the border with Afghanistan, get glimpses of the other side, from the hair-raising Afghan-built ovrings (footbridges) to the exotic imports on display in Khorog’s local bazaar.. Soaring along the renowned Pamir Highway is an unforgettable experience, especially in fine weather when the mighty peak of Muztag Ata rears its head.. Steeped in Silk Road history and immortalised in many great tales, the UNESCO-protected town of Khiva is as photogenic as it is legendary.. Witness the eternal flames of the Darvaza Crater, known as the ‘Door to Hell’, as you camp nearby – one of the strangest, most mesmerising geological oddities on earth.

Get to know – or under-Stan, if you will – the desert landscapes, multicultural influences and religious significance in Kyrgyzstan, Tajikistan, Uzbekistan and Turkmenistan on a 26-day Central Asian adventure. The region’s allure lies in the heritage of the Silk Road, where ideas, culture and people flowed from East to West, and in the green field backcountry and sweeping mountain landscapes that play host to the traditional nomadic lifestyle. Journey through cities featuring crumbling reminders of Soviet occupation and influence and out into the stunning wilds, where the ancient history of these long-lived nations – Persian and Mongol, Buddhist and Muslim – becomes clearer. Samarkand’s iconic Registan Square, the soaring Ak-Baital Pass, Khiva’s city within a city, the ‘Door to Hell’ – Central Asia has got it all. 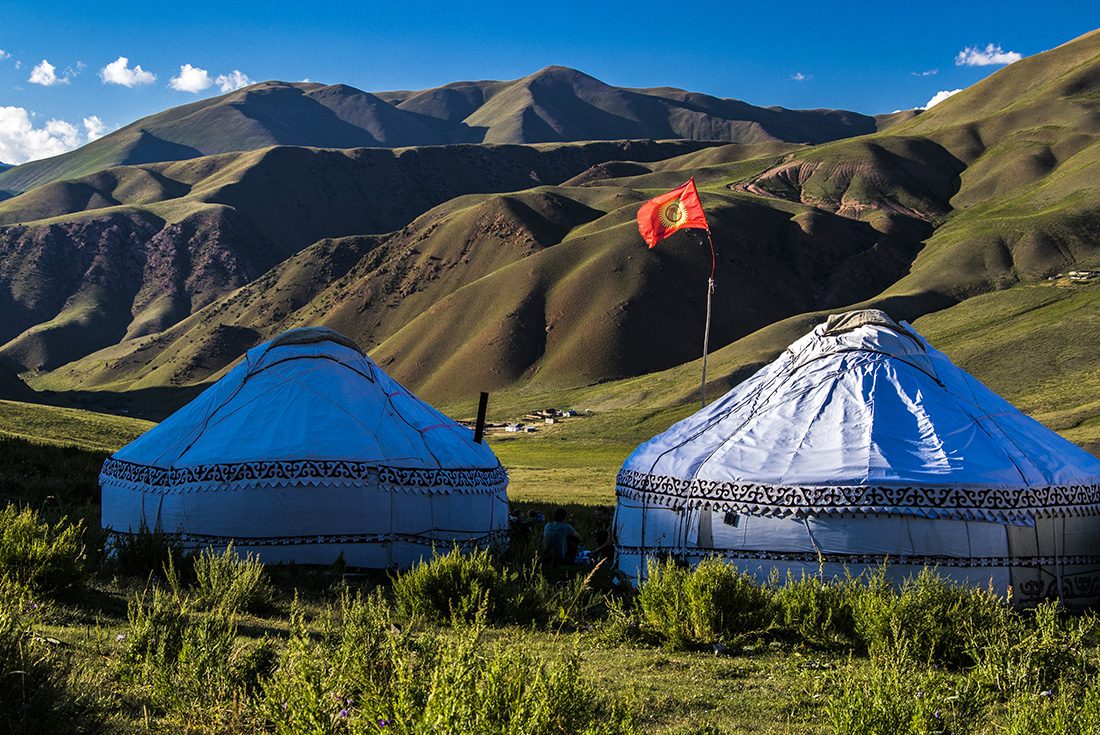 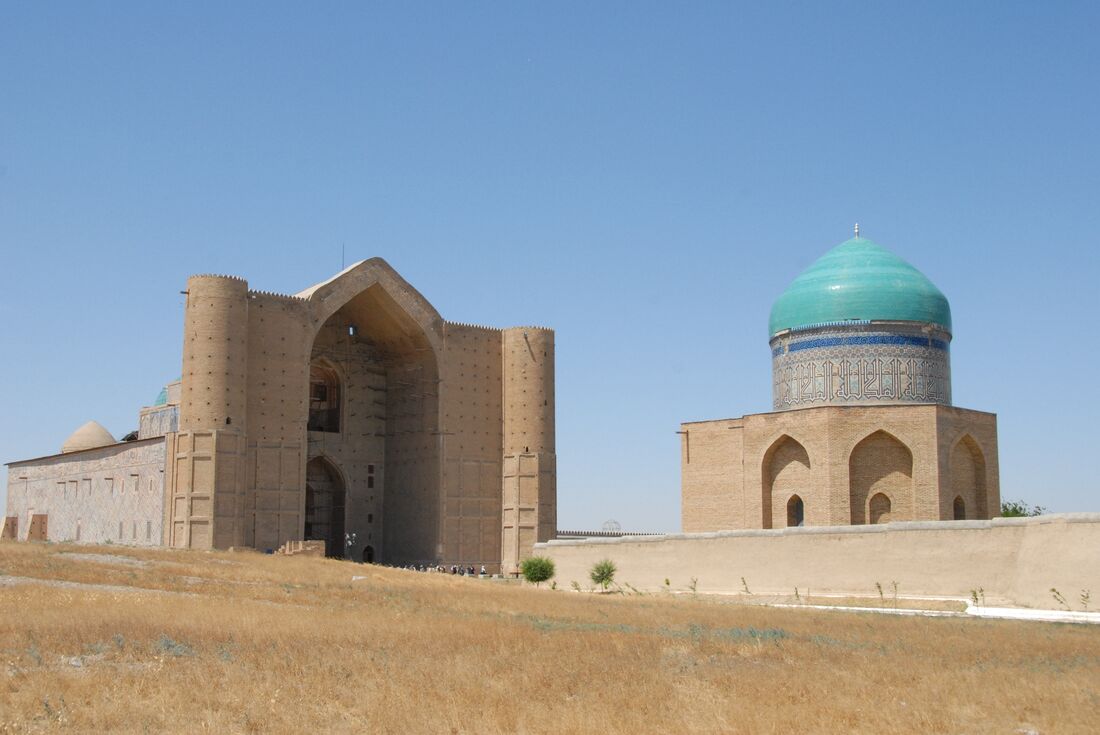 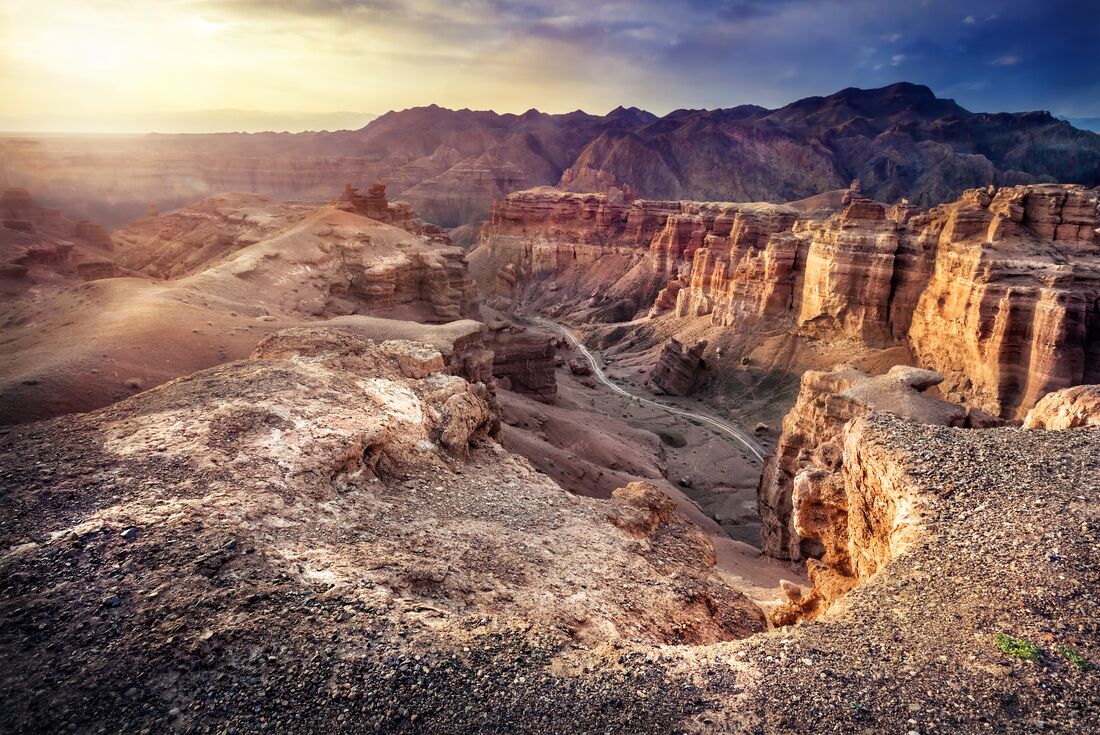 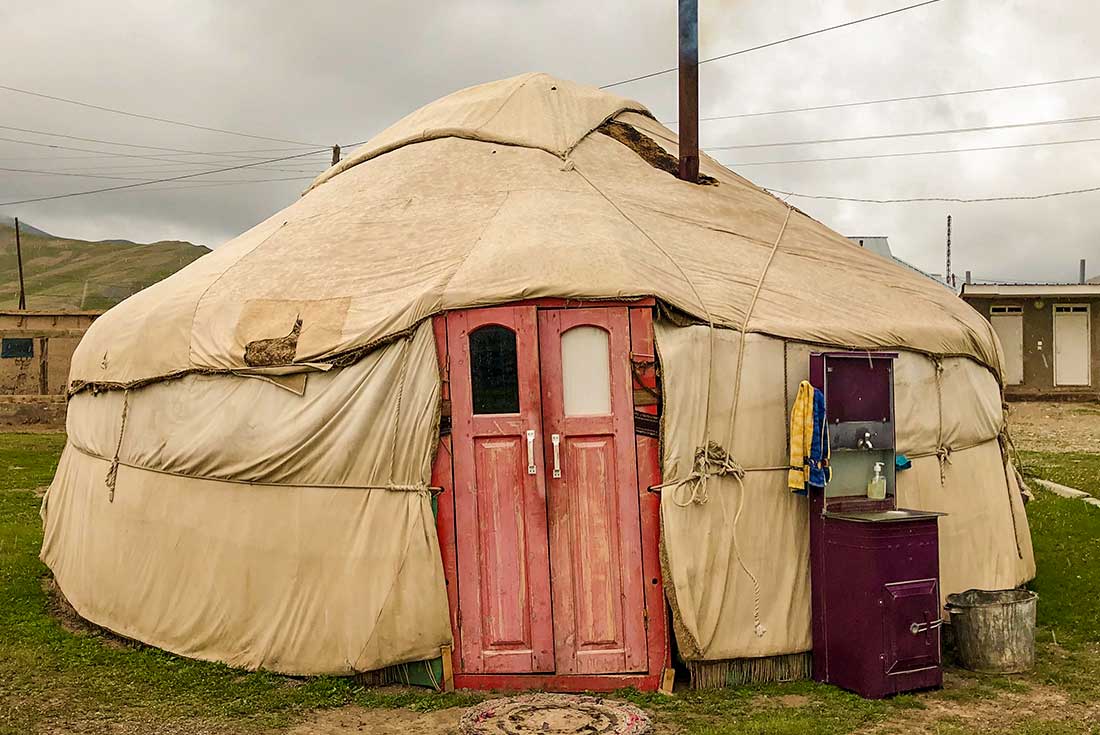 Welcome to Central Asia! Your adventure begins with a welcome meeting at 6 pm tonight. If you arrive early, be sure to explore Bishkek. You'll find it's a relaxed city of wide streets, trees and parklands, and a palpable Soviet past. The State Museum of Fine Arts is the city's premiere museum and TSUM Department Store in the city centre is renowned for having the best range of Kyrgyz souvenirs for shopping.

Depart Bishkek and travel to Toktogul (approximately 6 hours) though spectacular mountain scenery today. This is an urban settlement in the Jalal-Abad province of Kyrgyzstan. You will arrive in the early evening, then enjoy a night of free time. Due to the limited options in this area, the accommodation tonight might be in Chychkan or Kok Bel rather than Toktogul. Your leader will advise you in Bishkek as to where you will stay for your departure.

Travel onward from Toktogul to Kyrgyzstan's second city, Osh (approximately 8 hours). Located in the Fergana Valley in the south of the country, Osh is often referred to as the capital of the south. It has a mostly Uzbek population, which is evidence of its proximity to the border. While you are here, you'll visit Suleiman's (Solomon's) Mountain, a site of huge Islamic importance that dominates the centre of the city. While the walk is not strenuous for those with good fitness, you will need sturdy footwear as there are many slippery and steep steps and slopes. You will also visit Osh Bazaar, one of the biggest markets in Central Asia. As well as browsing this intriguing bazaar, here you can change some money into Tajikistan Somani for the journey ahead. Depending on the arrival time, some activities in Osh will be scheduled for tomorrow instead of today.

After a morning of exploring Osh, continue to Sary Tash (approximately 3 hours). On this journey you will cross the Taldyk Pass (3615 m). Conveniently located in the Alai Valley, bordering Tajikistan, Sary Tash is a junction for explorers heading off in many directions on the road to Osh, Murgab (Tajikistan), and Kashgar (China). You will spend the night in a basic guesthouse or homestay in this small, remote village at the junction of the Silk Road.

Today we drive to Murgab (approximately 6–7 hours). First, after breakfast, drive the 50 kilometres from Sary Tash to the Kyzyl Art Pass (4280 m). In this spectacularly remote spot, you will cross the border from Kyrgyzstan to Tajikistan. Remember to be patient as officials work through the various permits and procedures. Once inside Tajikistan, you'll make your way down the 95 km to Karakul Lake for lunch, with yet more dramatic scenery and photo opportunities along the way. Karakul Lake is too high to support aquatic life and is the largest out of 800 lakes in the Pamirs; these lakes were created by earthquakes, tectonic activity and glaciers. The final 135 km today takes you to Murgab via the Ak-Baital Pass (4655 m), the highest pass on the Pamir Highway and in the former Soviet Union. Murgab is located in a valley at approximately 3000 m above sea level, surrounded by high peaks. This region is inhabited mainly by Kyrgyz people. From here, on a clear day, you can see Muztag Ata (7546 m), the highest mountain in the Pamirs. While here, your hosts will prepare you a simple dinner and breakfast – homemade bread, plov (rice pilaf) and fried eggs or porridge. Keen stargazers will be treated to a great display on a clear night, with very little light pollution affecting views of the night sky.

Today is another long day of breathtaking driving (approximately 10 hours). Drive through the picturesque Alichur valley, over the Khargush Pass (4344 m), to the Wakhan Corridor. As you enter the Wakhan there are amazing views of the Pamirs to the right and of the Hindu Kush to the left. On the other side of the pass you will cross through another check point and travel along the Afghanistan border. In contrast to the previous village stays, the surroundings here are more fertile, with families growing tomatoes, cucumbers, cabbages and flowers on their own garden plots. A stop will be made somewhere along the way for lunch in a local chaikana (teahouse/cafeteria). Tonight you will stay in a traditional Pamiri house, which consists of a large pillared central room where all home life takes place. Home cooking awaits – perhaps lagman (noodle soup) or shorpa (meat and vegetable soup). After dinner your hosts will roll the mattresses and you'll share a sleeping area with the rest of the group.

Today is one of the most active days of the trip so take advantage of the chance to stretch your legs! After breakfast there's the option of hiking to an interesting petroglyph site above the village. The images, carved into the rocks high above the village, depict goats, caravans, horses and Ismaili symbols. You'll hike up a gravelly slope for at least 30 minutes (depending on fitness) before the first carvings are visible. There is little shade and it's hard going, but it's well worth the exertion, especially after so long in a vehicle. Next you will drive to nearby Vrang, where on a cliff-side pitted with caves stands a Buddhist complex with 4th-century origins. It's another climb to get there, but the path is flatter in places and not as physically demanding as the hike to the petroglyphs. Continue to Ptup via the stunning valley that follows the winding river (approximately 3 hours). You'll stop en route for lunch. Ptup is the location of your next Pamiri homestay in the traditional Wakhan style. The multi-generation family who live here have a beautiful garden and house with a flush toilet and shower with solar-heated water. While you're in Ptup you'll visit the stunning Yamchun Fort, which some claim is the most spectacular sight in the country. To get to the fort you'll follow very windy, narrow mountain roads, so for safety reasons this journey will be made well before nightfall. Access to the fort itself is via a tricky scramble down and along the rocky valley. The views out over the valley are amazing. If time and road conditions permit, you might be able to visit Bibi Fatima hot springs too.

From Ptup you will travel to Khorog (approximately 6 hours), which after our village experiences might seem like a bustling metropolis. You will pass through Ishkashim, perhaps stopping for lunch there, and continue along the Afghan border. Look out for the watchtowers and border crossings which, despite the proximity of the countries (sometimes only 100 metres apart), are few and far between, with very little contact between people on each side of the divide. Also watch out for ovrings, the spectacularly scary footbridges that Afghans have built along the cliff faces in order to be able to commute from one village to another. The contrast across the river valley here can be quite stark in places. Tajikistan is undoubtedly a poor country; in general the roads are sealed and buildings are connected with electricity, but over the river you will see locals living in much simpler conditions. You'll often be able to get a wave from your neighbours across the river as you travel along. Once in Khorog you will be in the capital of the Gorno-Badakshan Autonomous Oblast (GBAO). Here you'll stay in a guesthouse or hotel with private bathrooms. Perhaps enjoy a dinner at an Indian restaurant in town – one of the city's best.

Time to explore Khorog's sights today, including the bazaar. As you wander throughout this intriguing marketplace, your leader will be able to point out to you which stalls are selling Afghan goods from our neighbours across the river. There will also be time to check out the lovely botanical gardens that are perched high above the town, which boast some great panoramic views, and the curiously quaint Regional Museum.

Set off to Kala-i Khum (sometimes written Kalaikhum), a small town on the Pamir Highway (approximately 10 hours). Today is mostly a travel day, and since the town is so far away, most groups will arrive too late to be able to explore on arrival. Tonight's accommodation is a guesthouse or homestay which sometimes also accommodates other independent travellers. The guesthouse is multistory, so be prepared for some steep steps to get to and from the sleeping spaces, dining area and bathrooms. There is a simple shower, some running water and both a flush and pit toilet in the courtyard. Dinner is included again this evening, perhaps local style dumplings.

Enjoy some breakfast at the homestay before setting off for the nation's capital, Dushanbe (approximately 8 hours). In Dushanbe we stay for two nights in hotel with private bathrooms. For dinner tonight, the group might head out on the town to a Middle Eastern restaurant – one of the city's finest – or to a popular Chaikhana which has been in operation since Soviet times.

Check out the local central parks, fountains and monuments, with the option of visiting the main bazaar or Soviet-era Central Department Store for some souvenir shopping on our city tour toady. Just outside of Dushanbe (around 30 km) is the 18th-century Hissor Fort. Though this fort is being heavily restored, its colourful 20th-century history makes it quite an interesting visit. Back in Dushanbe, you'll check out the excellent Museum of National Antiquities. This relatively new museum reflects Tajikistan's diverse pre-Islamic cultural heritage, with exhibits from Bactrian, Buddhist, Zoroastrian and Hindu eras. The giant sleeping Buddha on the second floor may well be the highlight here.