Spend a whole day uncovering the majesty and mystery of the world wonder of Petra. The first glimpse of the Treasury from the narrow path of the Siq is unforgettable. Experience the best weightlessness this side of outer space with an effortless float in the super-salty waters of the Dead Sea. Hop in a jeep and experience the extraordinary desert scenery of Wadi Rum, a rugged moonscape of huge sandstone mountains. Meet Bedouin locals, learn about their ways, and sleep under the stars in a desert camp in the far-out destination of Wadi Rum

Looking for something to do over the Christmas break? Why not visit Jordan and marvel at a fascinating mix of modernity and ancient wonders. Live it up in the cosmopolitan city of Amman, explore Jordan’s mystic desert landscapes in Wadi Rum, visit the stunning ruins of Petra and trek to the remote hilltop village of Dana on this enriching and exciting tour of Jordan. With cultural gems, ancient artefacts and warm hospitality waiting around every corner, Jordan is an enthralling and magnetic land to visit. 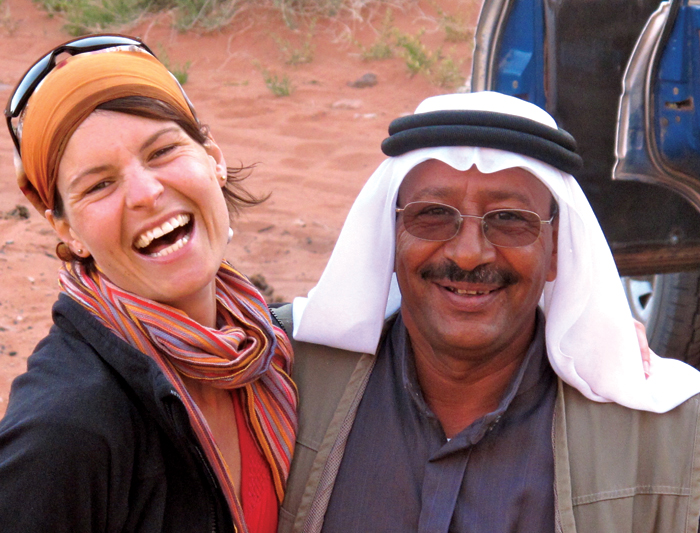 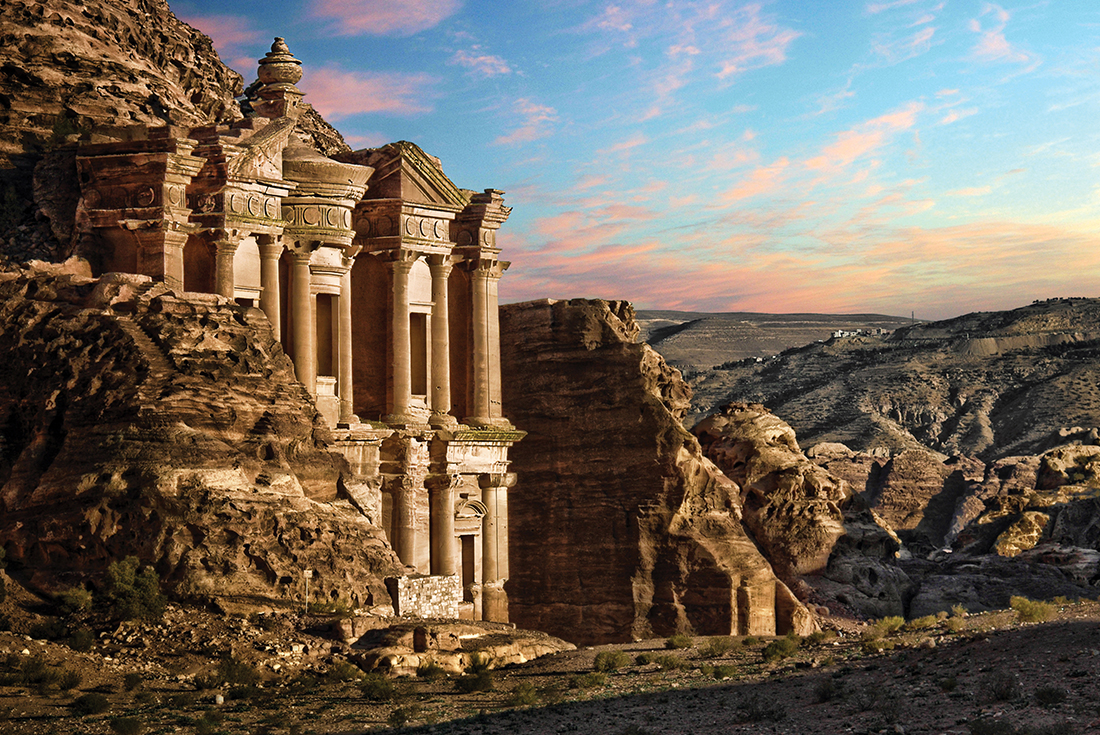 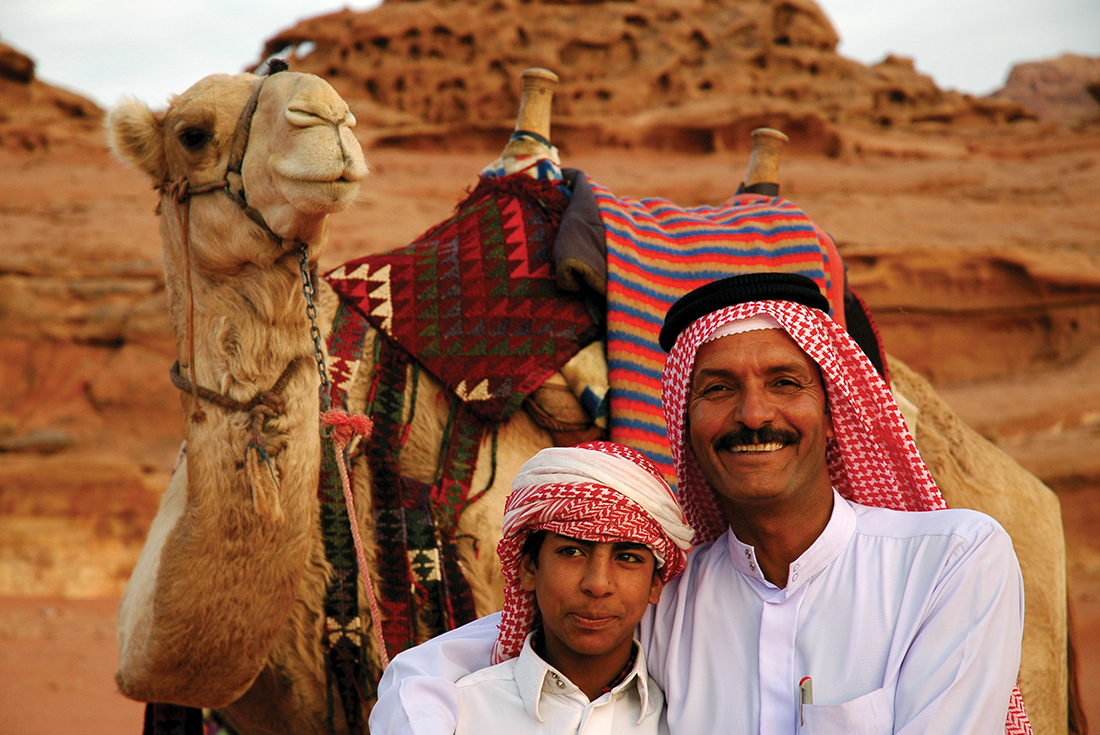 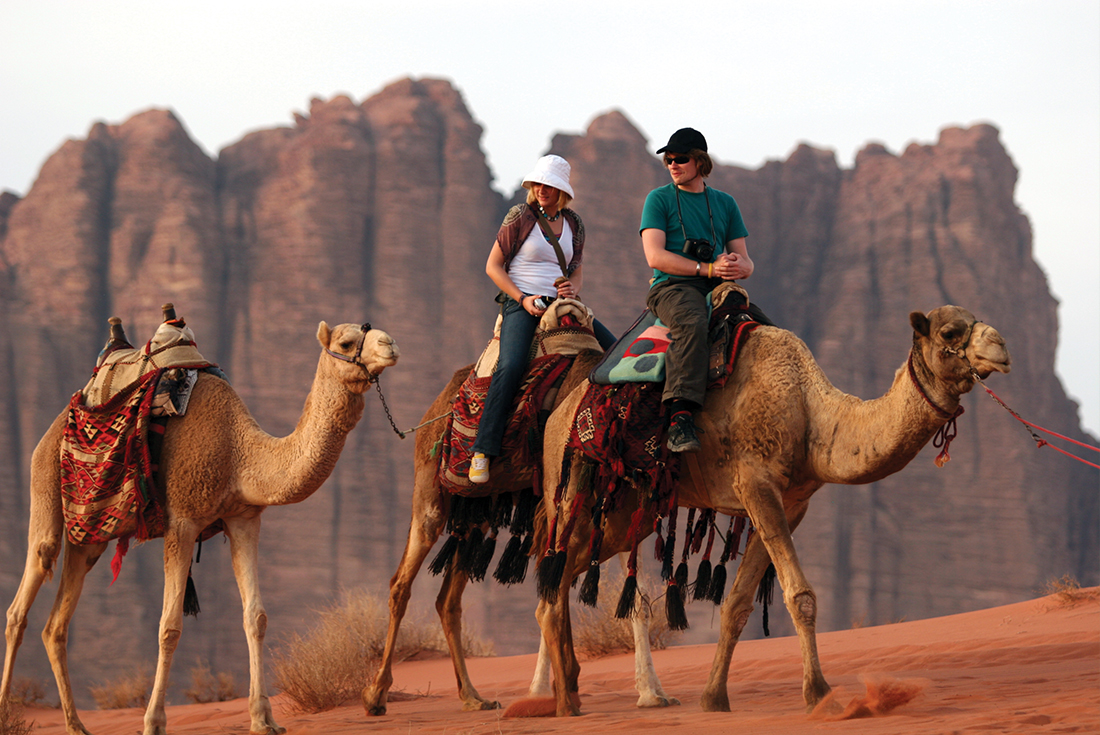 Ahlan Wa Sahlan! Welcome to Jordan, cosmopolitan and contemporary, yet steeped in biblical history. Your adventure begins with a Welcome Meeting at 6pm on Day 1. Please look for a note in the hotel lobby or ask the hotel reception where it will take place. If you can't arrange a flight that will arrive in time, you may wish to arrive a day early so you're able to attend. We'll be happy to book additional accommodation for you (subject to availability). If you're going to be late, please inform the hotel reception. We'll be collecting your insurance details and next of kin information at this meeting, so please have these on hand. As there's not much time spent in Amman on this itinerary, it's worth arriving a day or two early to explore the sights. If you do then the highlights are the citadel with its amazing sweeping views of Amman, the Jordan Museum – home to the Dead Sea Scrolls – or the Roman Theatre, right in the middle of downtown Amman. Tonight join your group at a Christmas Day dinner at a local restaurant in downtown Amman.

Follow in the footsteps of Lawrence of Arabia with a journey to the extraordinary desert scenery of Wadi Rum, a rugged moonscape of huge sandstone mountains (approximately 5 hours). A 4-hour jeep safari will take you through some of the most beautiful and sublime desert scenery on the planet, a true highlight of this trip. Wadi Rum is full of weird and beautiful lunar-like rock formations, and traces of ancient civilisations can be seen in the many carved inscriptions found throughout the area, from pictographs to Thamudic, Nabataean and Arabic texts. The most enduring monuments in Wadi Rum are those carved by nature – the natural rock bridges, towering rose-coloured sand dunes and scattered rocky peaks. Tonight you’ll sleep in a simple desert camp, with the choice of sleeping under a camel hair tent or out under the stars. Enjoy a delicious dinner cooked in an earthen oven by your Bedouin hosts. Conditions are basic at the desert camp, but the hospitality of your hosts is legendary and you'll treasure the memory of sleeping beneath the twinkling desert night sky. Notes: A mattress and blankets are provided. Please be aware that while the desert may be very hot during the day, it will still be cool at night and warm clothes and a sleeping bag are highly recommended when travelling outside of the summer months. Western-style toilet facilities are available.

After waking up in the unique surrounds of the Bedouin camp this morning, you will enjoy a trek around the area (approximately 12 to 15 kilometres), with a stop for tea and a lunch break. You might scale one of the large sand dunes for sensational views of the surrounding area. This is the perfect chance to snap some unbelievable pictures. Wadi Rum is a truly beautiful place, where great gouts of rock on a carpet of bright red sand have been eroded into fantastical gnarled shapes. Explore the distinctive rock formations and soak in the vast silence of this lunar-like landscape. Wadi Rum is probably best known for its connection with the enigmatic British officer T.E. Lawrence, who was based here during the Great Arab Revolt of 1917-18. You’ll get to spend another memorable night in the desert camp with your new Bedouin friends. Meaning ‘Desert Dwellers’ in Arabic, the Bedouins are a semi-nomadic people, and in Jordan up to 40 per cent of the general population is though to have Bedouin ancestry. This might explain the legendary hospitality of the Jordanians – in traditional Bedouin culture, a huge onus is placed on taking in and feeding any visitor, and so you’ll enjoy brilliant hospitality while you’re here in this incredible place. Notes: Please make sure you have appropriate, sturdy, comfortable footwear for this trek.

This morning you'll leave your desert camp, taking 4WDs to the main entrance, which is opposite the Seven Pillars of Wisdom, the mountain named after Lawrence of Arabia’s book. The visitor's centre here is also a great spot to buy some jewellery and handicrafts, mostly made by a women's co-operative that is aimed at supporting traditional local industries. You will then continue your journey to the fabled city of Petra (approximately 2 hours) by private van. On arrival there is time in the afternoon to check out the town that has grown up around the site. Petra is justifiably on most people’s list of ‘must-visit’ places. It's the jewel of Jordan, the lost city of the biblical Nabateans, an impressive series of tombs and dwellings hidden behind ornate façades carved directly into the rock, and one of the new Seven Wonders of the World. Dating back to the 6th century BC, the site was lost to Western minds until it was rediscovered in 1812 by a Swiss explorer – he dressed up like a local to sneak in and then revealed the secret to everyone. Thankfully he did though because this isn’t something you’d want to miss. Squeeze through a mile long narrow path, known as the Siq, through huge towers of rock and get your first glimpse of the iconic Treasury – it’s impossible not to imagine the armies and traders who made their way down here in the ancient times. It’s amazing to think that this awesome, intricate building entrance was hand carved out of the rock. The site is surprisingly big, and you can explore the old Roman road, temples and several old tombs, as well as the rock-hewn amphitheatre. In the afternoon, you have the opportunity to explore the rest of the site at your own pace. For those with the energy, there's the challenging but highly rewarding walk up the steps to the stunning Monastery (approximately 1 hour). Seek out a Turkish bath for the perfect end to an incredible day. Notes: One day's entrance fee to Petra is included. Please note that when entering Petra as a group, a complimentary horse ride is included in the ticket price from the entrance point down to the Siq. Intrepid doesn't recommend that you take this option due to the safety and insurance liability involved. Please note a lot of walking is required to see all the sites and viewpoints of Petra. A basic level of fitness will enhance your enjoyment of your visit.

Today is your day to either return to Petra and continue exploring or consider checking out the town. Perhaps a visit to a turkish bath to relax.

Travel the King's Highway to the historic crusader castle of Kerak, which stands on a cliff commandingly overlooking Wadi Karak and the Dead Sea in the distance (approximately 2.5 hours). You’ll have time to explore the evocative ruins and discover the legends of the 12th-century battles between the Crusaders and the Muslim armies led by the Arab hero, Saladin. Pack your swim gear as next you can wash off the dust from exploring with a dip like no other. Drive to the shores of the Dead Sea, the lowest point on Earth (420 metres below sea level). This isn’t actually a sea but a super-salty lake (dead because of the lack of life in it) where the density of the water means you’ll go for a float, not a swim. Spend some time relaxing here and get some classic floating pictures. The mud here is supposed to have healing properties, so why not cover yourself from head to toe for a nutrient-rich natural mineral mud bath. Towels are available for hire. Continue to Mt Nebo, the spot where the prophet Moses is said to have seen the ‘promised land’ and where he’s supposedly buried. Explore this sanctuary and view the remarkable mosaics of the 4th century church. 30 minutes down the road is the historical town of Madaba, famous for its Ottoman-style houses and beautiful Byzantine-era mosaics, including the famous 6th-century mosaic map of Jerusalem and the Holy Land at St George's Church. Other mosaic masterpieces found within churches and the Archaeological Museum depict a rampant profusion of flora and fauna, as well as scenes from mythology and daily life. Literally hundreds of other mosaics from the 5th to 7th centuries are scattered throughout Madaba’s churches and homes.

Today you will leave Madaba for a short drive north (approximately 75 minutes) to Jerash, once one of the grandest ancient Roman cities in the world. These are some of the best preserved Greco-Roman ruins around. The city thrived due to its position on the route of the spice and incenses trade, and it reached its zenith as a favourite of the emperor Hadrian around AD 130. The ancient walled town that survives today is a remarkable evocation of life 2,000 years ago. It has a striking collection of archways and theatres, baths, public buildings and colonnaded streets, and is a beautiful place to spend a day exploring. Discover Hadrian’s arch, the partially restored hippodrome, ornate public fountains, the south amphitheatre, and see the collection of daily artefacts uncovered during excavations. Grand ionic columns encircle the city's centrepiece, the Oval Plaza, a wonderfully atmospheric place to linger after uncovering Jerash's riches. After a full day of exploring, transfer back to Madaba for your final night. Gather your travel buddies together and share a celebratory dinner and shisha as you bring in the New Year together.

This trip comes to an end today. There are no activities planned and you are able to depart the accommodation at any time.