Immerse yourself in the communist past and vibrant present of Bucharest, a city often underrated by travellers. Travel through the scenic Rila Mountains in Bulgaria, mingling with monks at the 10th-century Rila Monastery. The village of Gorno Draglishte is home to a rich cultural heritage and a delightful community of welcoming locals. Experience the best of both worlds during a family home-stay (delicious home-cooked dinner included). The ancient Roman theatre in Plovdiv’s city centre was only discovered when a landslide uncovered it in the 1970s. Explore the amphitheatre and Plovdiv’s other significant sights on a guided walking tour

Embark on a spectacular journey from Romania and through Bulgaria, discovering the architectural grandeur and quaint cultural enclaves that make this such an intriguing part of the world. Absorb Bucharest’s austere atmosphere on a guided walking tour, compare age-old places of worship in Sofia and be treated to traditional Bulgarian hospitality on an overnight homestay in Gorno Draglishte. Breathe in crisp alpine air on a hike in the Pirin Mountains, and meander back in time in the Old Town of Plovdiv. Relatively short in terms of distance travelled, this nine-day trip is a fascinating study in just how much regions can change as you cross national borders. 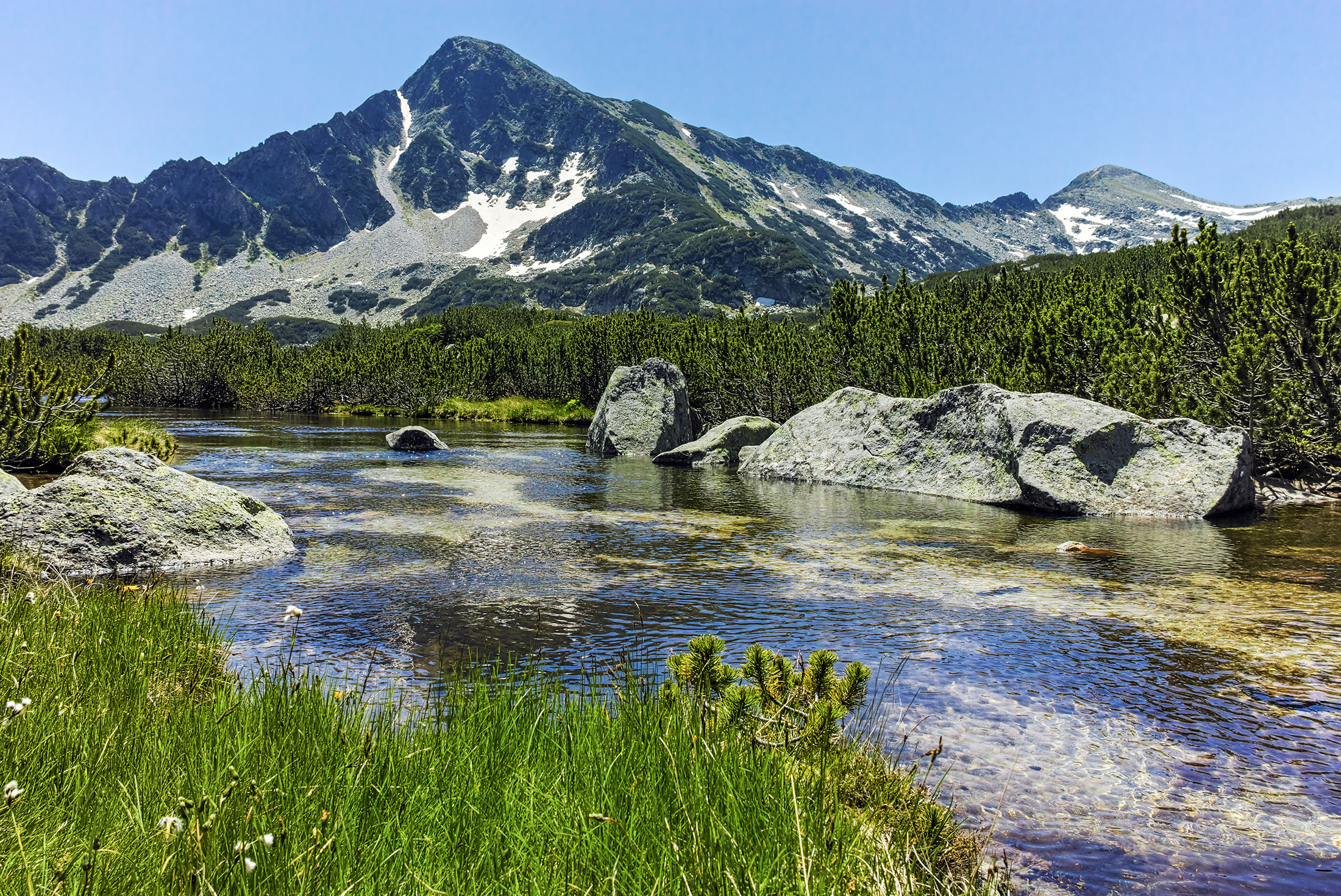 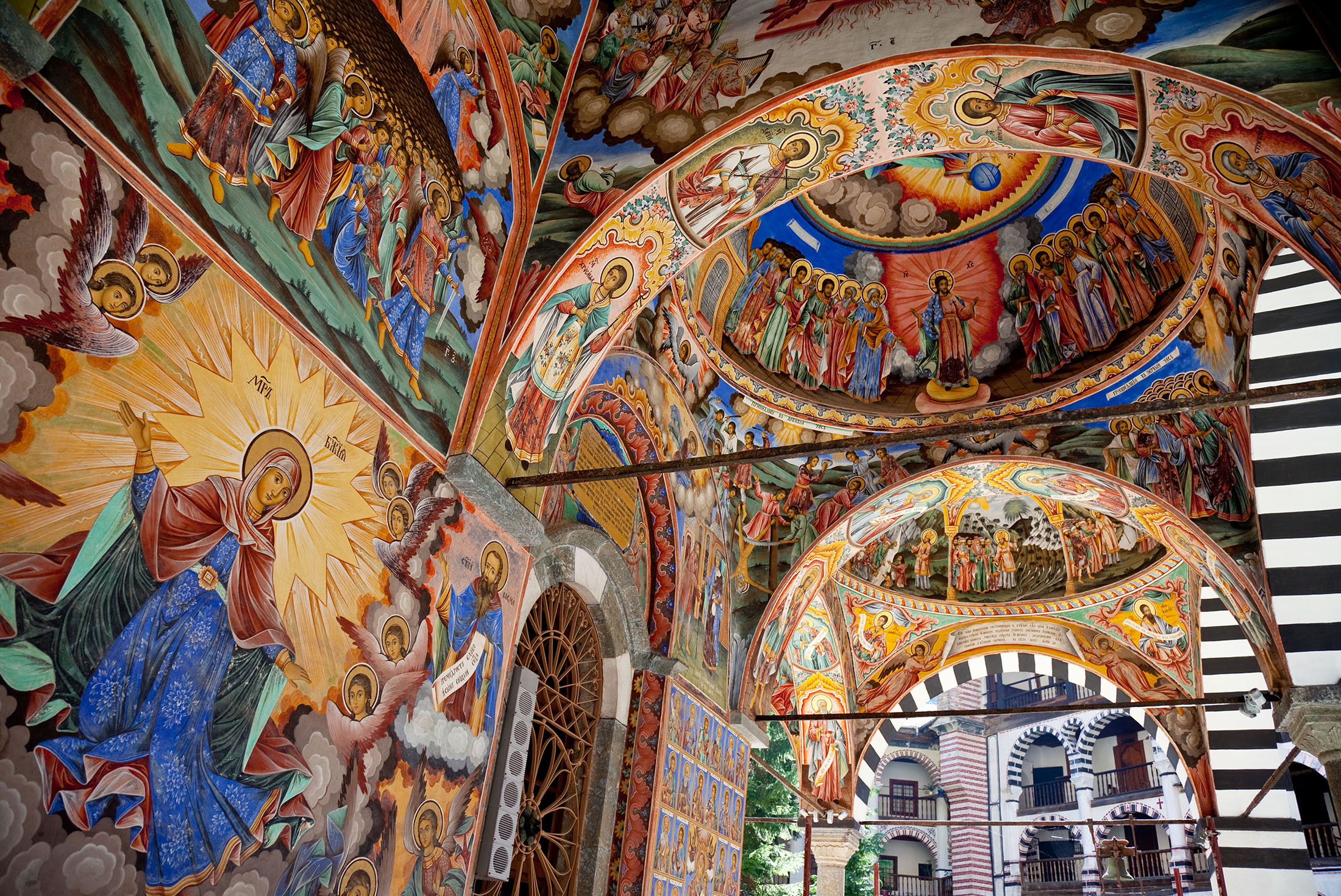 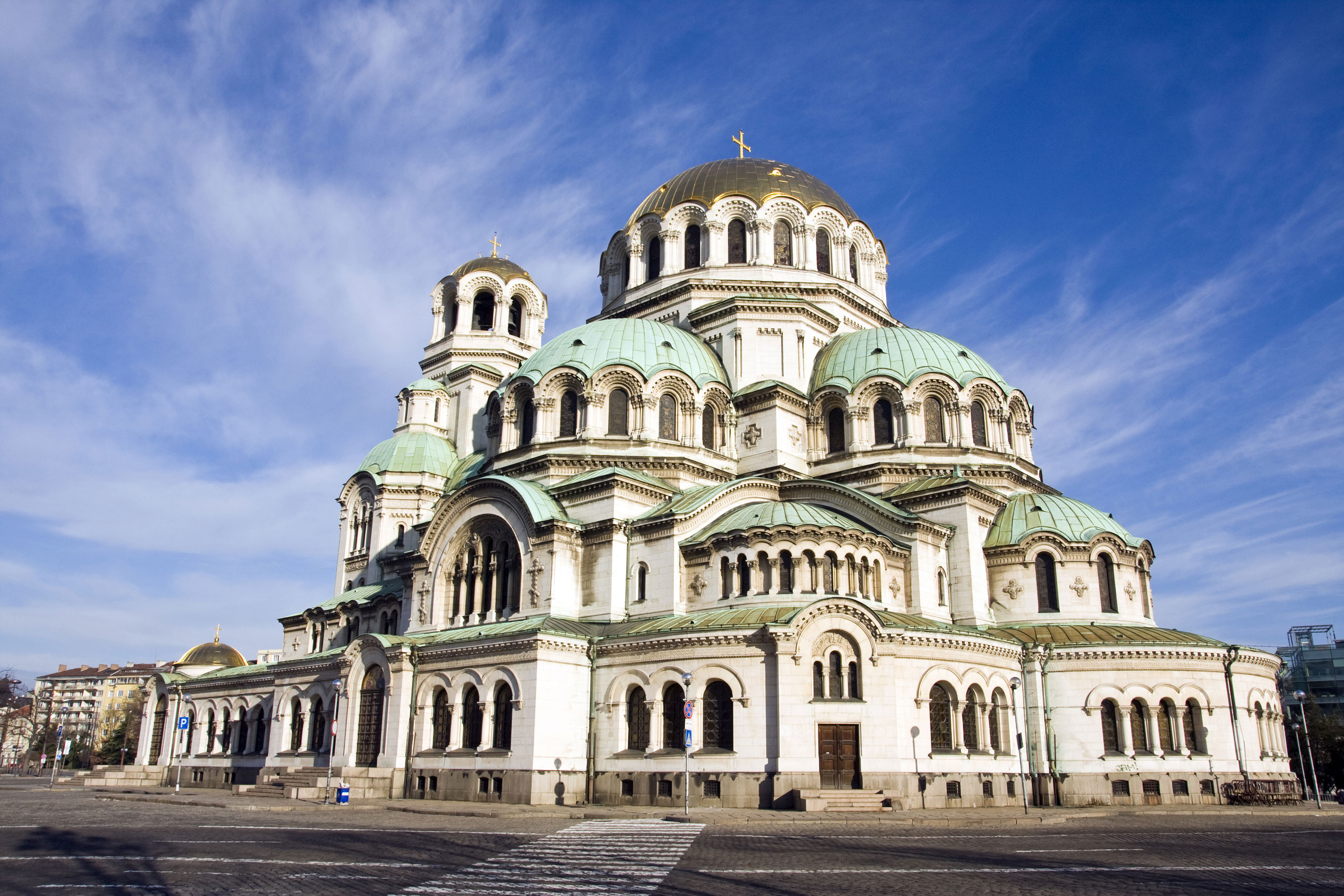 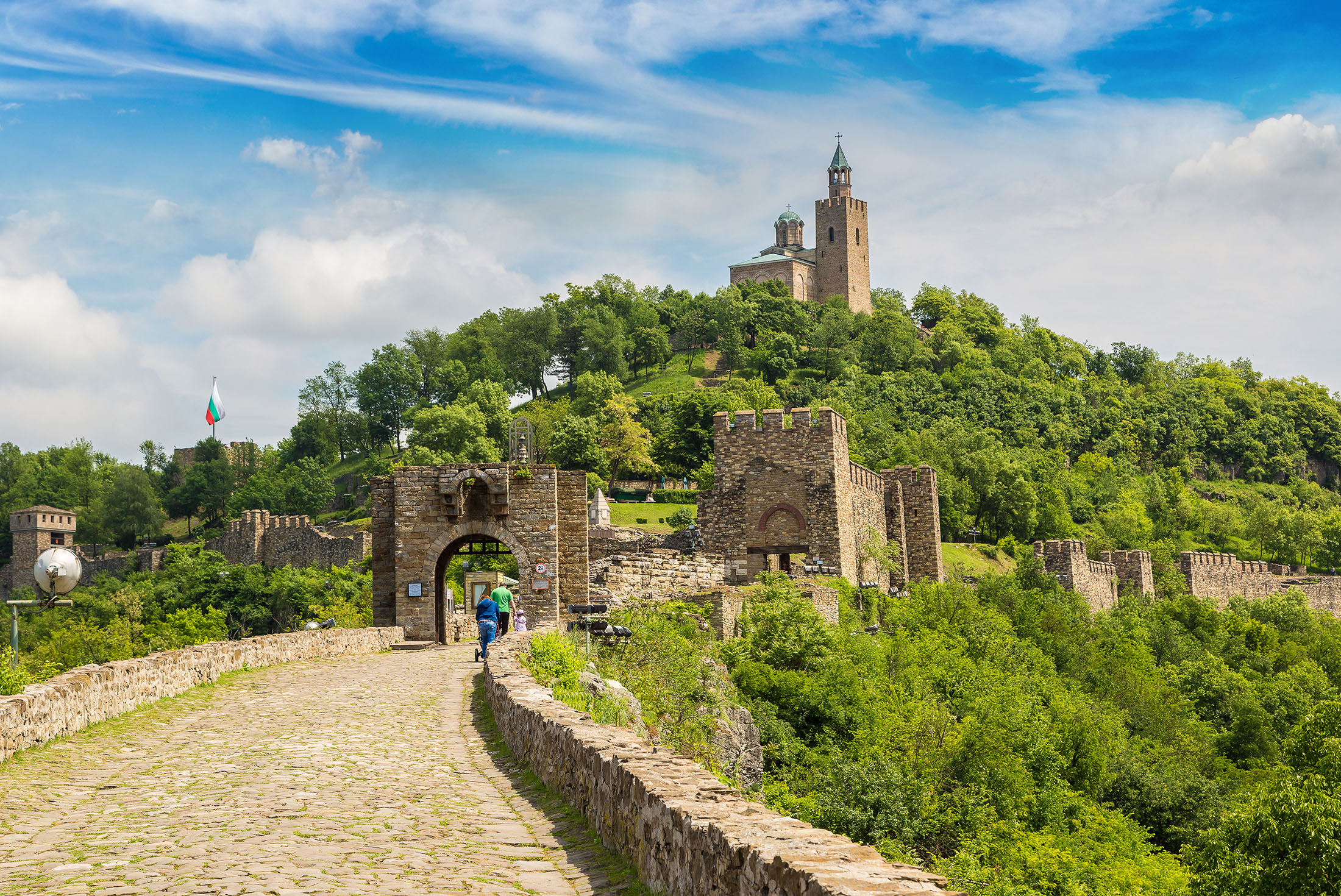 Salut! Welcome to Romania. Bucharest, Romania's capital city, likes big things. It's home to one of Europe's biggest squares and its Palace of Parliament is the second largest building in the world. It's worth arriving into the city a few days early to explore. Perhaps take a tour of the Palace of Parliament (former dictator Nicolae Ceauşescu ordered the construction of this 12-storied monster, a building of staggering scale and opulence that includes 1,100 rooms and 4,500 chandeliers), or check out the Museum of the Romanian Peasant. You might even like to partake in one of our Urban Adventure day trips, such as the 'Home Cooked Bucharest' tour.

Travel by train across the friendship bridge into Bulgaria and on to the picturesque town of Veliko Tarnovo (approx 6 hrs). Veliko Tarnovo's history is incredible. Founded in 4500 BC by the Neolithic people, the Romans later built the first fortress walls and in the 6th century a Byzantine capital was established on Tsarevets Hill by Emperor Justinian. After the foundation of the second Bulgarian empire in 1185, it became the second most important and beautiful city in the region (after Constantinople) and trade and culture flourished for the next 200 years. In 1393 the town fell to the Turks who held the city until the Russians liberated it in 1877. Because of its importance during the second Bulgarian empire, the city was chosen as the place where the Bulgarian constitution was written in 1879 and where the official proclamation of Bulgaria as an independent state was made in 1908.

This morning join your leader for a visit to Veliko Tarnovo's imposing Tsarevets Fortress which overlooks the city. This once-magnificent fortress was first built in the 7th century and the ruined citadel is a delight to wander through. The rest of the day is free for you to explore the City of Tsars. Wander through the Old Quarter with its preserved Renaissance houses and handicraft workshops before relaxing in one of the town's cafes or 'vinarnas' (wine bars).

Travel by public bus from Veliko Tarnovo to Plovdiv (approximately 6.5 hours). Situated on the Maritsa River, Plovdiv was once the meeting point of two ancient transportation routes. Join a local guide for a tour of the main sights and some insight into the town's history. The most remarkable sight is the ancient Roman theatre, accidentally ‘discovered’ after a landslide exposed the site in the early 1970s. Built in the 2nd century BC during the reign of Trajanus, the theatre seats about 6,000 people and is now back in use. From here, wander up to the site of the former hilltop fortress of Nebet Tepe, where you can enjoy excellent views of the city. Head back down to visit the 15th-century Dzhumaya Mosque, still in use today. Later today make sure you indulge in the local cuisine, famed for its grilled meats and vegetables on skewers.

Today is a free day, so why not embark on an aimless wander through Plovdiv's narrow alleyways to see traditional coppersmiths, farriers and potters at work, or browse through the myriads of antique shops lining the streets. Alternatively head out of town and check out the underground crypt at Bachkovo Monastery or discover one of the many hot springs in the Plovdiv region. One of the most well-known spa towns is Hisarya, famous for its 22 mineral springs. Your leader will be on hand to help you organise transportation to get there.

Journey on to the small town of Bansko (approximately 3 hours). Set at the base of the majestic Pirin Mountains, Bansko is home to more than 150 cultural monuments. Down its cobbled streets, many of its stone houses have been transformed into charming ‘mehanes’ (taverns). Wander through pl. Vazrazhdane and check out the frescoes of the Church of Sveta Troitsa, or the paintings in the Rilski Convent. In the afternoon head out to the Belitsa Bear Sanctuary, home to rescued dancing bears. The sanctuary is the largest of its type in Europe, covering over 120,000 square metres. Here the bears can languish in lush green woods, with a river and pool in each enclosure. Seeing them sleeping in the sun, playing in the water and being free from captivity can be very moving. In the evening, you'll have the opportunity to indulge in some local cuisine. Try filet elena (spicy cured meat) or kapama (simmered meat, rice and sauerkraut), washing it down with some delicious melnik (dark red wine).

This morning venture up into the Pirin Mountains. After a short ride on a chairlift stretch your legs with a hike into the eastern slopes of the mountains, with Mt Vihren, the range's highest peak at almost 3,000m, visible to the west. In the afternoon transfer from Bansko to the small village of Gorno Draglishte (approximately 30 minutes) and spend the night at our local friend's house. While the accommodation is simple and not all rooms have an en suite, the atmosphere is warm and welcoming and you'll be treated to a delicious home-cooked dinner. You'll even have the chance to learn about the traditional weaving practices of the area, and maybe join the hosts for a dance.

Today journey into the Rila Mountains, where you'll visit the impressive Rila Monastery. Tucked away in a valley, this World Heritage-listed site is the largest and holiest of Bulgaria's orthodox monasteries. It was founded in 927 to keep Bulgarian spiritual and social life alive during Turkish rule. The entire monastery complex is a work of art in itself – check out stunning murals, the 14th-century Hrelyo Tower, the five-domed Birth of the Blessed Virgin Church and the original 19th-century monastery kitchen. Then it's on to Sofia. Bulgaria's capital is a cosmopolitan city with wide tree-lined boulevards and pleasant parks. You've got the rest of the day to wander, so maybe begin with a browse around the cured meats and cheese of the Central Market Hall, then take a walk through the city and see the gold-domed Alexander Nevski Church. You might want to sate your cultural curiosity at the National History Museum, discover artefacts from the many empires of old that have occupied the city at the National Archaeological Museum, or get cultural at the National Art Gallery. In the evening why not meet for a last dinner with your group.

All good things come to an end, and this morning your adventure officially comes to a close. If you would like to extend your stay in Sofia we are able to book additional accommodation for you (subject to availability).