Bigger and more beautiful than any photo can capture, the Taj Mahal is a triumph of Mughal architecture that promises to inspire even the most seasoned travellers.. Learn to whip up some central Indian staples during a cooking demonstration at home with friends in Orchha; the perfect opportunity to experience an authentic slice of Indian family life.. See pilgrims praying and bathing along the ghats of the sacred Ganges River during an unforgettable sunrise cruise in Varanasi – one of India’s holiest cities.. Stay in a lodge and wake to the calls of the jungle in Chitwan National Park, then embark on a safari in search of rhino, deer, monkeys, and a wide array of birdlife.

Travel from India to Nepal on an insightful overland trip from Delhi to Kathmandu. From reminders of the Mughal dynasty in northern India to the snow-capped Himalayas of Nepal, this trip will truly inspire. Witness the colour and contrast between the bazaars of Delhi, the jungle in Orchha, and the sacred Ganges. Be awed by the Taj Mahal and see the sunrise over the holy city of Varanasi. Come face-to-face with pilgrims, villagers, holy men, and generations of shopkeepers. For those wanting to travel by land between these two very different neighbours, this is the perfect journey. 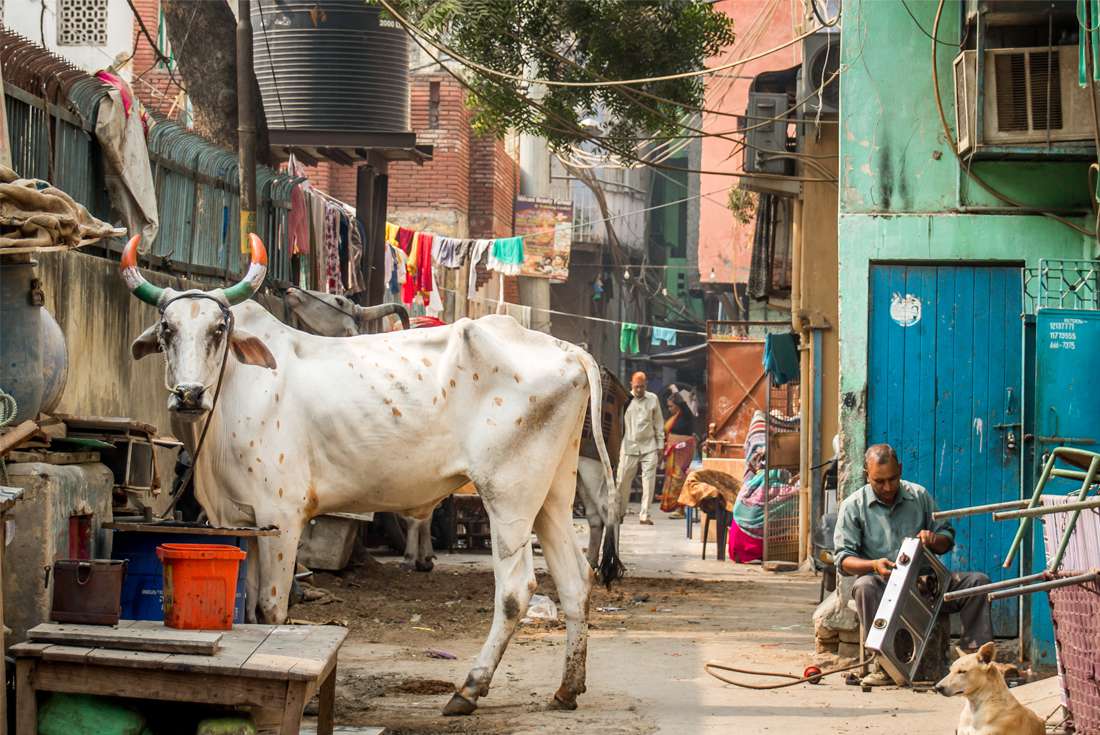 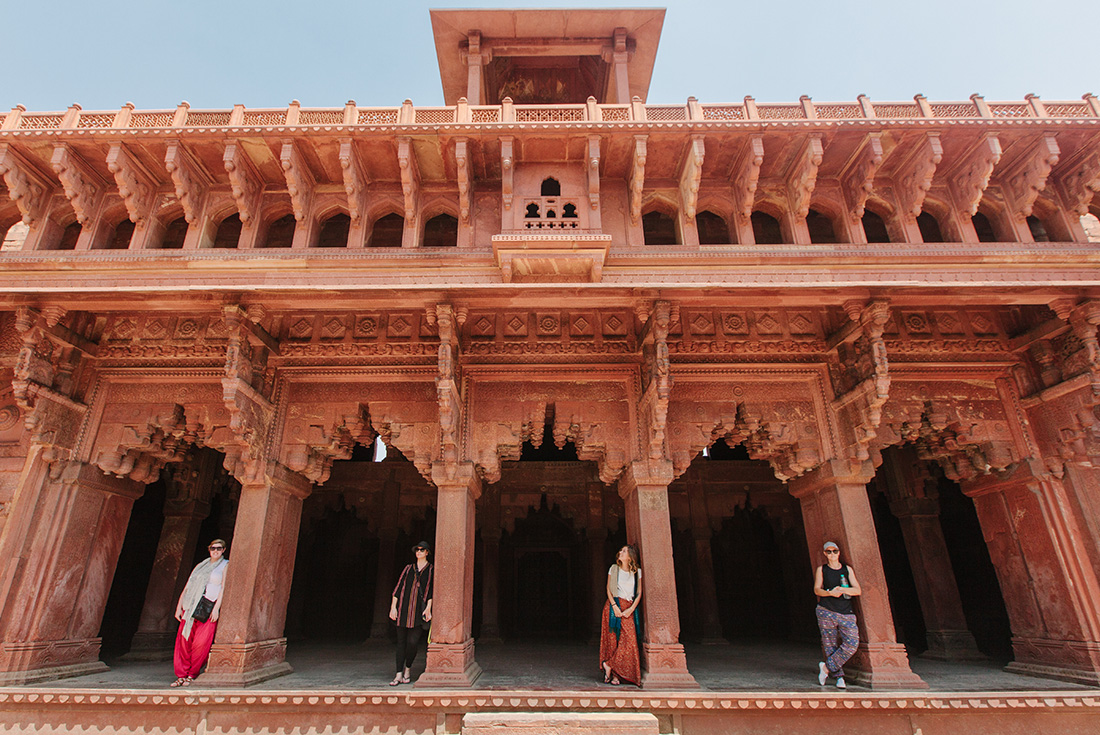 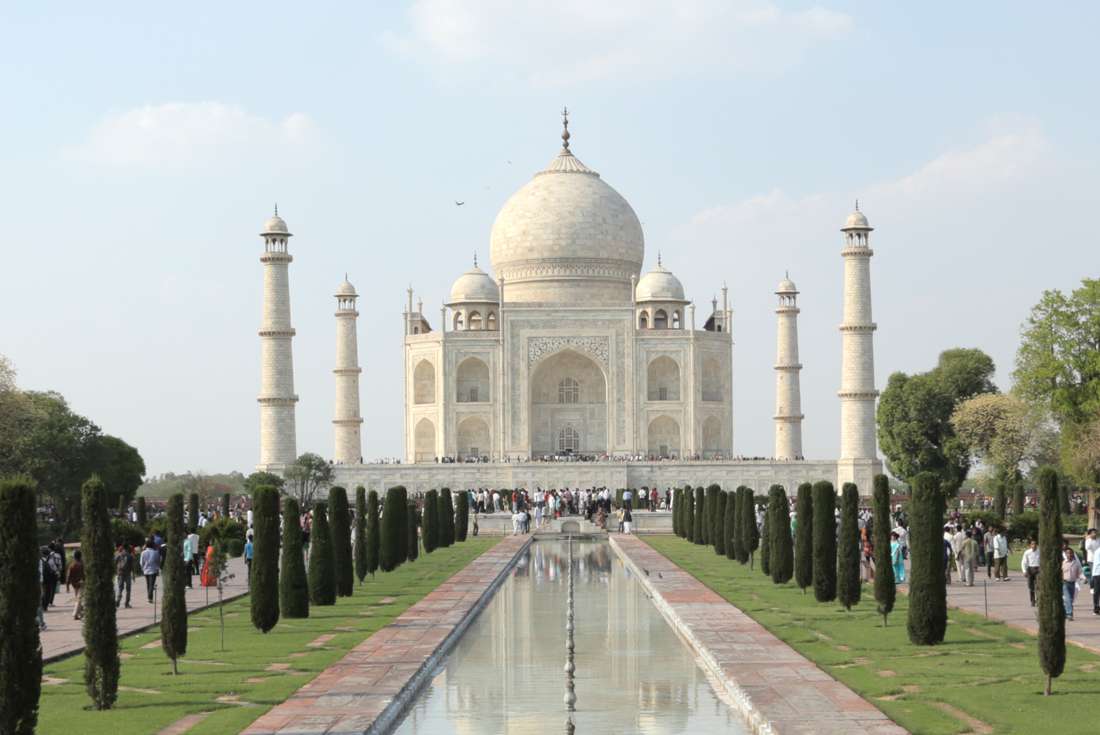 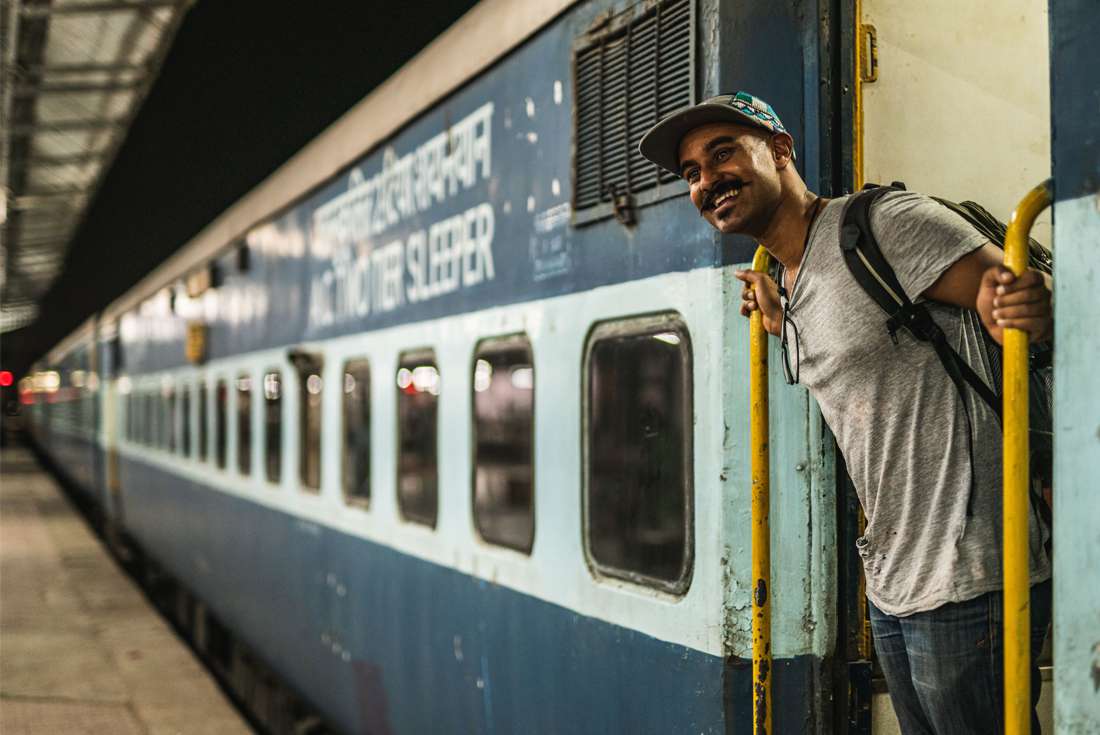 Welcome to India! This adventure begins with a welcome meeting at 1 pm today. In Delhi, watch one of the world's greatest shows unfold as people, traffic, cows, and kids all work together in a kind of organised chaos around historical sites from different eras, museums and galleries, shops, and endless bazaars. This afternoon, join your group leader on an excursion into the sights and sounds of Old Delhi. Set off on the city's modern metro system, then get a taste of India's renowned old-school public transport with an optional cycle rickshaw ride through chaotic streets. Make a visit to the Jama Masjid, Delhi's oldest mosque, and one of its most impressive buildings, then visit the Sheeshganj Gurudwara (Sikh Temple) to learn about the Sikh religion. This evening, maybe grab a chai, put your feet up and let it all soak in.

After arriving into the Agra today by one of India's express air-conditioned trains (approximately 3 hours), you’ll head straight to the most recognisable sight in India. It doesn’t matter who you are, the Taj Mahal will leave you awe-struck with the morning light shimmering off its white marble surface. Best known as a monument to love and loss, the 17th century Taj is a beautiful example of Mughal architecture, surrounded by trimmed English gardens. The highlights keep coming as you take a motorised rickshaw tour, a truly fun and Intrepid way to see the monuments of Agra. Later, you'll also visit Akbar's Mausoleum – a beautiful sandstone and marble tomb built for the greatest of the Mughal emperors.

Agra is also home to one of the finest looking forts in India. This morning you’ll enter the dark red sandstone stronghold of Agra Fort – part fortress, part palace and part prison – and search through throne rooms and tiny but incredibly decorated mosques. Later, travel by air-conditioned train from Agra to Jhansi (approximately 3 hours). Upon arrival in Jhansi, travel through traditional rural Indian landscapes to reach the beautiful town of Orchha on the banks of the Betwa River (approximately 45 minutes). Here you’ll have the opportunity to uncover a very different side of India. Initially a hunting area, Orchha has changed very little over the centuries. Despite its small size, it is filled with many beautiful temples and palaces built here in the 16th century by the ruling Bundelas clan. This evening, witness the Ram Raja Temple puja (prayer) ceremony at the shrine at the heart of the city. Stay in a restored heritage property tonight.

Today you'll visit the stunning Orchha Palace, built by Bir Sing Deo for his friend Jehangir, the great Mughal ruler. Take note of the grand Iwans (domes) that were built large enough to allow the movement of war elephants. You’ll also make a stop at Taragram - a paper making factory that enables local tribal women to work outside the realm usually afforded to them. The paper is crafted from wood pulp and recycled clothing.

Today you'll get to soak up more of the unique atmosphere of Orchha, and excitingly you'll get to soak up the local flavours too. Learn about the local cuisine, its ingredients, and how it's prepared, in a cooking demonstration with our local friends. In not too long, you’ll get to taste the unforgettable results. This evening you’ll return to Jhansi and board an overnight train to Allahabad (approximately 15 hours) – the starting point for your Ganges boat journey.

Arrive in Allahabad and transfer to the Ganges (approximately 2 hours) by small riverboats for the sailing trip. You'll experience the sacred River Ganges, the lifeblood of millions of Indian people, with a boat cruise through the heart of rural India. A support crew will be on hand as you sail down this iconic waterway, passing village communities and viewing river life as it goes on around you. The boats are equipped with life jackets, the deck has mattresses and cushions to relax on, and it’s all covered with a cloth roof for sun protection. Arrive at your campsite and relax riverside, read a book or play some cricket. Watch the sun go down and eat a delicious vegetarian meal prepared by the boatmen.

Leaving your boats at Chunar, transfer by private vehicle to Varanasi (approximately 2 hours). This is one of holiest cities around; the ultimate destination for Hindu pilgrims who travel from far and wide to experience this spiritual city. Overflowing with temples, shrines and devotees, there’s no doubt it’s one of the most amazing cities. Set off on a walking tour of the oldest part of the city, bustling with tourists and priests, and see different rituals being performed. Wander through the Old City with its maze of narrow alleyways packed full of small shops and stalls, and lumbering cows. This evening, soak up the unique magical atmosphere of a candle flower ceremony as the sun sets.

Today starts early with a sunrise boat ride on the Ganges, where you can watch the light gradually illuminate the many ghats and temples along the river as you pass. The rest of the day is free for you to use as you like. There’s an option to take a trip to nearby Sarnath – one of the four main Buddhist pilgrimage destinations. The site is where Buddha preached his message of the path to enlightenment and features a number of stupas and museums to explore. Or perhaps visit Ram Nagar Fort – a crumbling 17th-century fort and palace on the eastern bank of the Ganges, that’s the ancestral home of the Maharaja of Banaras. Alternatively, the day can be spent exploring the laneways and alleys behind the ghats, picking up some examples of the excellent local silk industry, or perfecting yoga in this most chakra-balancing of places.

Today, wave goodbye to India and say namaste to Nepal, as you cross the border at Gorakhpur. Though there’s always something to look at out the windows, it’s a good idea to have some other entertainment on hand for the long day of travelling ahead (approximately 8-10 hours including stops). For groups of less than five, you will travel by car and for bigger groups by bus. On entering Nepal, take a private bus to your hotel in Lumbini (approximately 1 hour). This is no ordinary border town, but the birthplace of Gautama Buddha, the founder of Buddhism, and one of his four holy places of pilgrimage. It's said in the Parinibbana Sutta that Buddha identified the sites as those of his birth, enlightenment, first discourse, and death. You’ll visit the beautiful Ashoka Pillars and hop on cycle rickshaws to the Maya Devi Temple, the actual site where Lord Buddha is thought to have been born.

Continue your journey by private vehicle through the Terai to Intrepid Foundation’s project, the Madi Valley Homestay (4.5 hours). This project provides sustainable incomes and encourages the communities living on the fringes of Chitwan National Park to conserve the wilderness and wildlife around them. On our arrival, the local men and women, dressed proudly in their traditional Magar attire, will be there to greet you and welcome you into their homes. In the evening enjoy a cultural performance by the locals where they demonstrate one of the oldest ethnic dance forms of the Magar community; the Maruni Naach.

In the morning you will be given a guided village tour. After, try your luck fishing in one of the ponds around the village. Depending on weather and road conditions, you will also have the option to take a short drive to Baikunthe Tal where you can trek to a beautiful waterfall, sacred to the local people. After saying your goodbyes to your Madi Valley hosts, you’ll head to your lodge in Chitwan National Park via Twenty Thousand Lakes (Bis Hajaar Tal) by private vehicle (2 hours). Nepal’s second-largest natural wetland, this beautiful reserve area is a maze of small lakes that teems with wildlife. Home to numerous crocodiles, this is one of the park’s best areas for birdwatching, with hundreds of species using it as a migratory route stop. If you’re lucky you might spot an Indian rhino. Chitwan National Park sits at the base of the Himalayas. UNESCO declared the area a World Heritage site in 1984, and it offers some of the best wildlife viewing in Asia, with rhino, deer, monkeys and a wide array of birdlife. Arrive and settle in to your accommodation before jumping on a bike to explore a local village. In the evening, prepare for tomorrow’s exploration of the park with a presentation on the park's history, flora, and fauna. MONSOON ALTERNATE ITINERARY Today after breakfast, take a walk to the Rapti river from where you’ll be taken by boat to Ghagtai village (approximately 3.5 hours). Enjoy some brilliantly-coloured-bird watching along the Rapti river and a picnic lunch. Keep your eyes peeled for gharials - this fish-eating crocodile has long been hunted for the supposed aphrodisiac qualities of its snout. Learn more about them when you drop by the crocodile breeding centre. Spend the night in a guesthouse with a view of the river and plenty of jungle ambience in Ghagtai tonight. Toilet and bathroom facilities are shared here.