Explore Western Australia’s desert landscapes, national parks and spectacular Coral Coast in rugged style on the ultimate small group overland adventure.. The cattle stations, red earth and mining communities of the Pilbara are reminiscent of the sun-baked Australia much of the world imagines, and you’ll get to see it all firsthand.. Consider peering into the ecologically diverse underwater world of Ningaloo Reef by plane, glass-bottom boat or snorkel, and swim with the gentle beasts of the deep in season – whalesharks!. Enjoy the flexibility of a private vehicle, the local knowledge of a passionate guide and the magic of camping under the great southern sky – what’s not to love about this part of Australia?

A colossal land replete with natural attractions, Western Australia’s vast expanses and unique landscapes will surprise you at every turn. From the serene shorelines of Broome and Shell Beach and freshwater swimming holes of Karijini National Park to Ningaloo’s vibrant reef, this 10-day Broome to Perth adventure really does make for an unforgettable road trip. Discover the hidden grottoes and rock pools of the Pilbara, dip into the crystalline waters of Turquoise Bay and admire the world’s oldest living organisms in Kalbarri before finishing up in laidback Perth. Covering an immense distance at a leisurely pace, this trip serves as the perfect getaway for those looking to unearth some of Australia’s most serene delights. 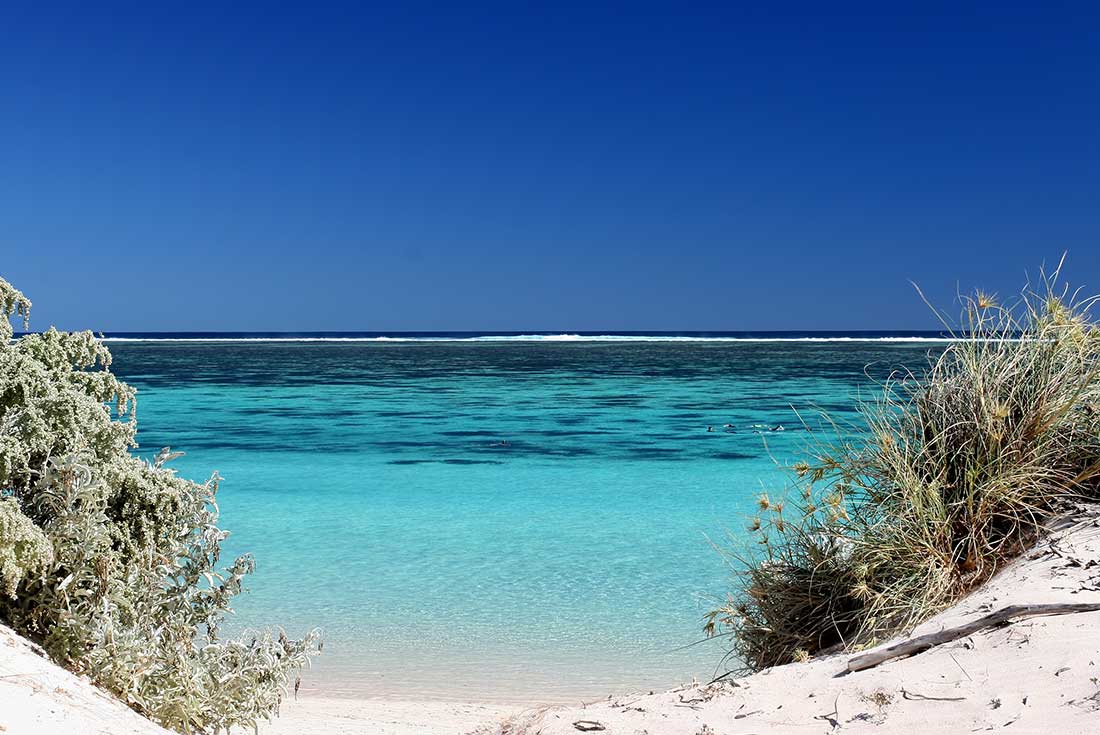 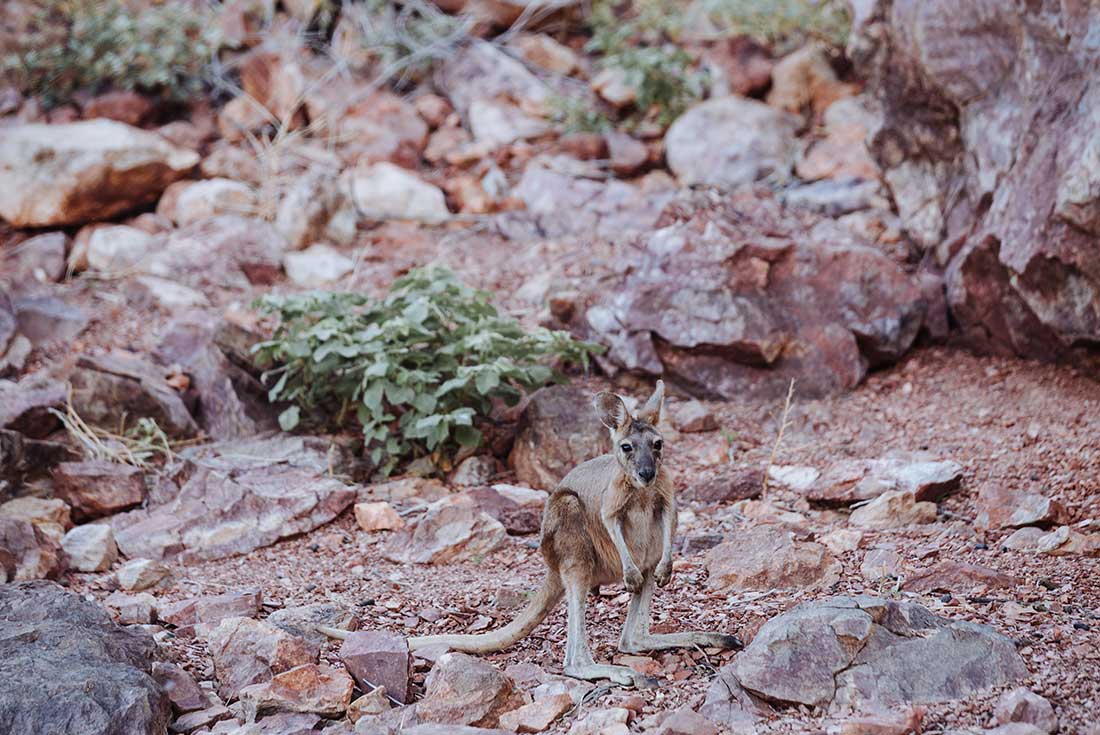 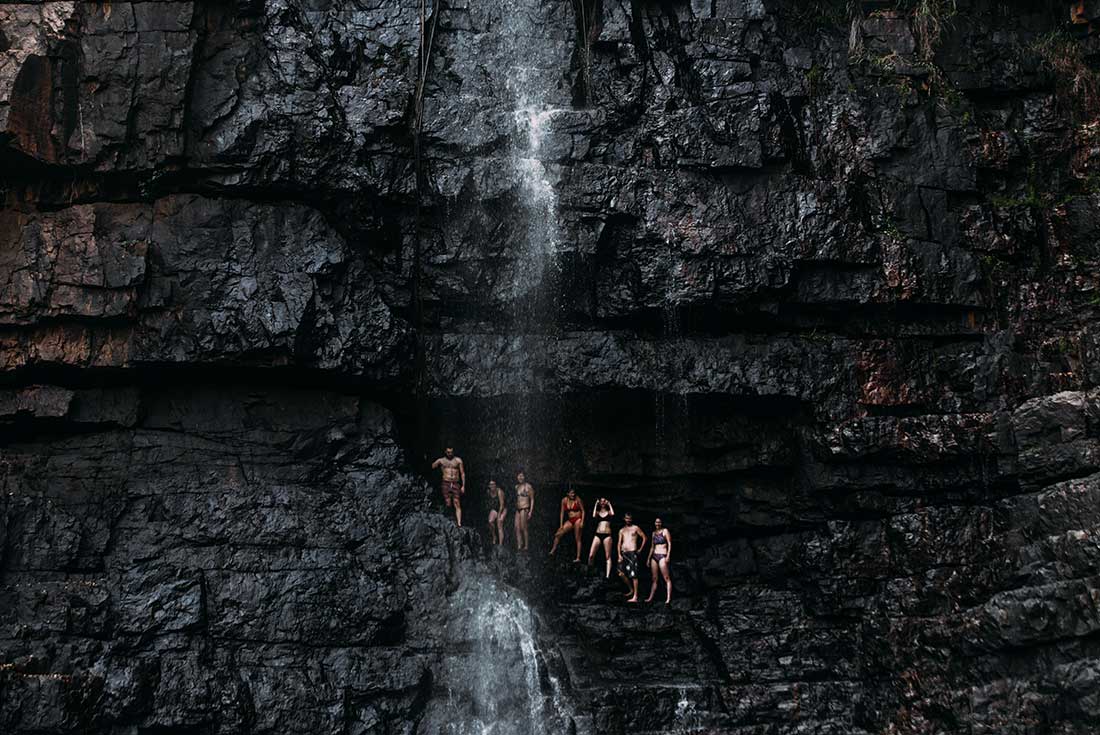 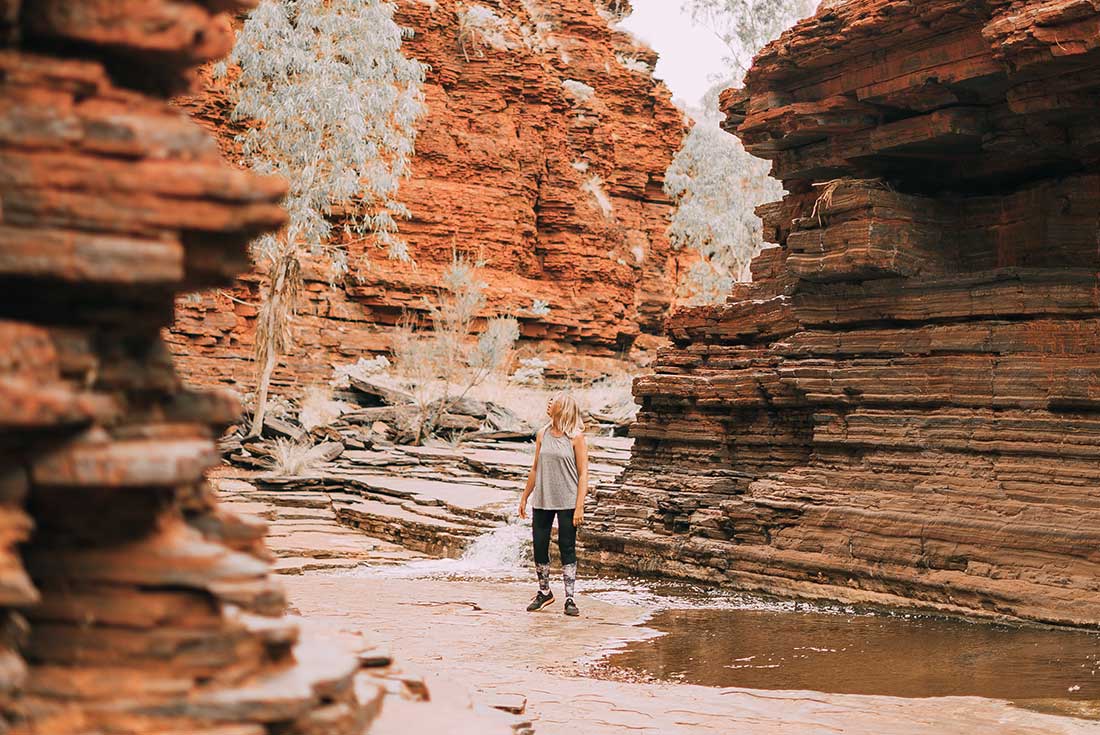 Welcome to the pearling town of Broome, where your Western Australian adventure begins. Those keen on beach-lazing might like to arrive a few days earlier, as the local beaches are superb. Depart Broome and cross the Great Sandy Desert, calling in at Eighty Mile Beach for a stroll along the white sand. From here travel south, passing through the mining city of Port Hedland, where you can witness the enormity of the iron ore industry. Spend the night on a station in the Pilbara Region.

This morning we head toward Karijini National Park with a stop in Port Headland to check out the iron ore mecca of Australia. If time permits, we may duck into one of the gorges this afternoon. If not, we'll set up camp in the park and get a good night's rest before we head in for a full day of exploring tomorrow.

Spend a full day exploring the gorges, gullies and secluded swimming spots of Karijini. Weano Gorge, Hancock Gorge, Dales Gorge and Oxers Lookout are just some of the better-known sites we’ll get to. This, without any doubt, is one of Australia’s most magnificent national parks (and it’s not like Australia has any shortage of them).

Pack up your towel and walking shoes and head out for another day exploring Karijini with your leader. Anything you didn’t tick off the list yesterday you can chase up today – whether it’s a snooze in the sun or a strenuous trek to a lookout. Swim in waterholes, hike along rocky trails and splash about in waterfalls. Paradise!

Today is a long day of driving (approximately 7 hours in total). Leaving Karijini, travel through the vast bushland and cattle stations of Pilbara. This sparsely populated region is known for its red earth and rich mineral deposits. Spend the night at an exclusive campsite at Yardie Creek in the Cape Range National Park, near Exmouth.

Enjoy a day of freedom and relaxation. Depending on the season, you’ll have the option to snorkel or scuba dive in search of whale sharks or manta rays, the largest rays in the world. Perhaps take a walk to Vlamingh Head Lighthouse, or soak up the sun on the pristine beach at Turquoise Bay. In the afternoon, take a short trip to beautiful Coral Bay.

Spend another day on Ningaloo Reef, one of the world’s largest fringing reefs, meaning that it starts practically from the water’s edge. You just swim out from shore and suddenly you’re in a world of coral, fish, turtles and manta rays. Swimming above these enormous majestic creatures is really something else, they might even put on an acrobatics show for you! Not much of a swimmer? There’s also the option of taking in the scene on a glass bottom boat tour, along with many other optional activities. We'll introduce you to the friendly staff at Coral Bay Eco Tours.

Today we cross over the Tropic of Capricorn to Monkey Mia. The main stop for the day is Shell Beach, which, much as name would suggest, is a beach made of shells. They cover a stretch 60-kilometres long and up to seven-metres deep. Tonight, stay in Monkey Mia.

This morning, check out Monkey Mia – part of the Peron Peninsula, which extends into part of the Indian Ocean known as Shark Bay. This popular spot is known for its friendly local dolphins. Afterwards, continue across the Eastern Peninsula. See stromatolites, the oldest living organisms in the world, then head south for Kalbarri. Time permitting, there’ll be a stop along the way at Murchison Gorge, where there’s the opportunity to admire the landscape through Nature’s Window.

It’s a driving day today, but a spectacular one. Cruising through the coastal gorges of Kalbarri National Park, we come to the quaint coastal town of Dongara, which sits at the head of the Irwin River. Visit to Western Australia’s own Pink Lake at Port Gregory. Head on to Sandy Cape (Lancelin), a vast sand desert peopled by the strange limestone structures of the Pinnacles Nambung National Park. After a walk around here it’s on to Perth, where this adventure finishes on arrival at 6 pm. 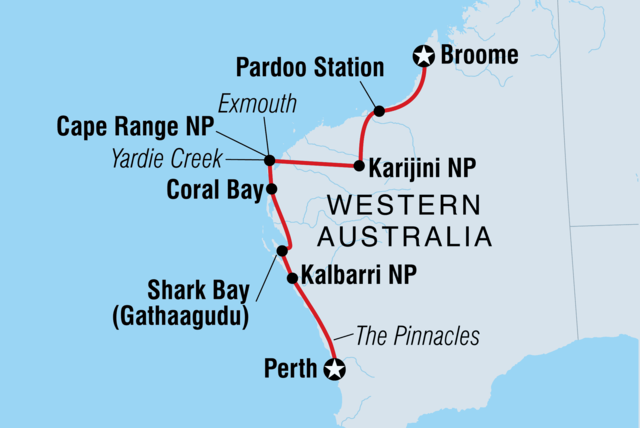