Wander the largest medina in North Africa in Tunis, navigating the twisting alleyways to discover tiny stores overflowing with goods, ancient mosques and bustling squares.. Explore the incredible remains of Dougga, a Roman city (built on a Namibian city) with dozens of standing columns, an impressive amphitheatre and a mausoleum built 2200 years ago.. Go underground into the subterranean homes of Matmata, where a central sunken courtyard leads to cave-like rooms carved from sandstone.. Trek through the Sahara Desert with Berber guides, then settle in at a desert camp to watch the sunset over the epic sea of dunes.

Discover living history, rippling desert landscapes and seaside bliss on this 12-day tour through under-the-radar Tunisia. Wander through waterfront medinas where the scent of jasmine floats on the sea breeze. Explore World Heritage-listed Roman ruins without the crowds they normally attract. Hike over sand dunes and under craggy mountains. Feast on spicy Tunisian cuisine, which blends the staples favoured by the nomadic peoples of North African with Italian and Spanish flavours. From vast stretches of pink-hued salt lakes to turquoise coast and palm-fringed oases – this tour reveals the diverse sides of this little-visited Mediterranean jewel. 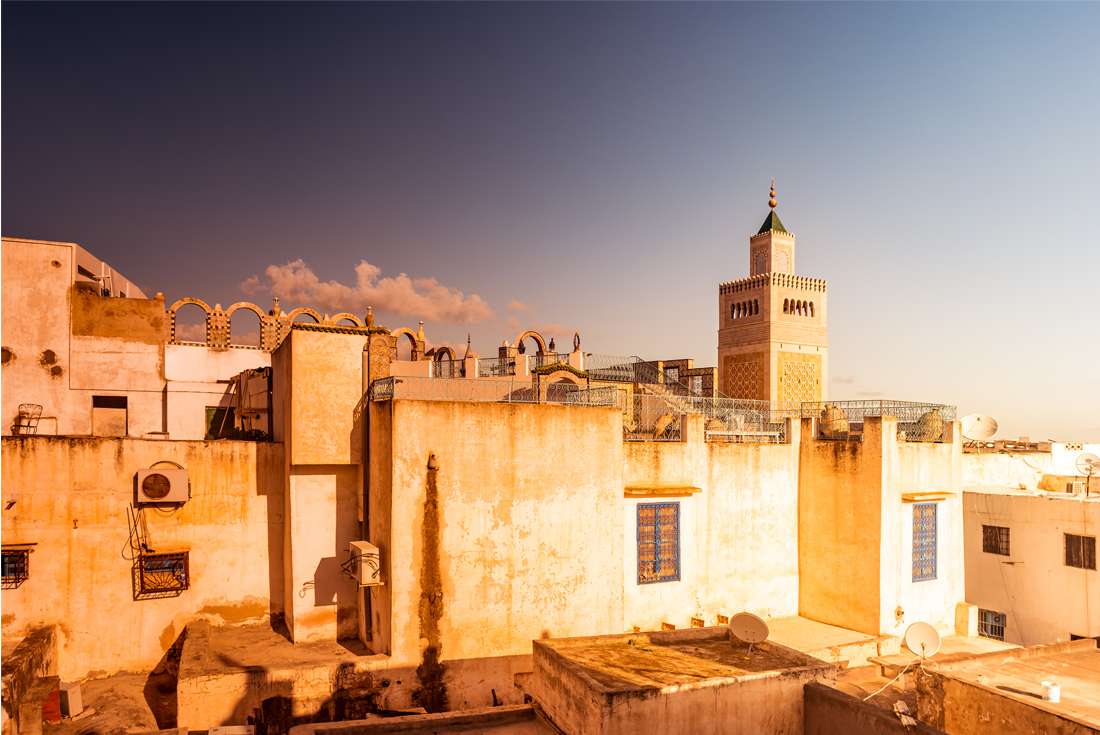 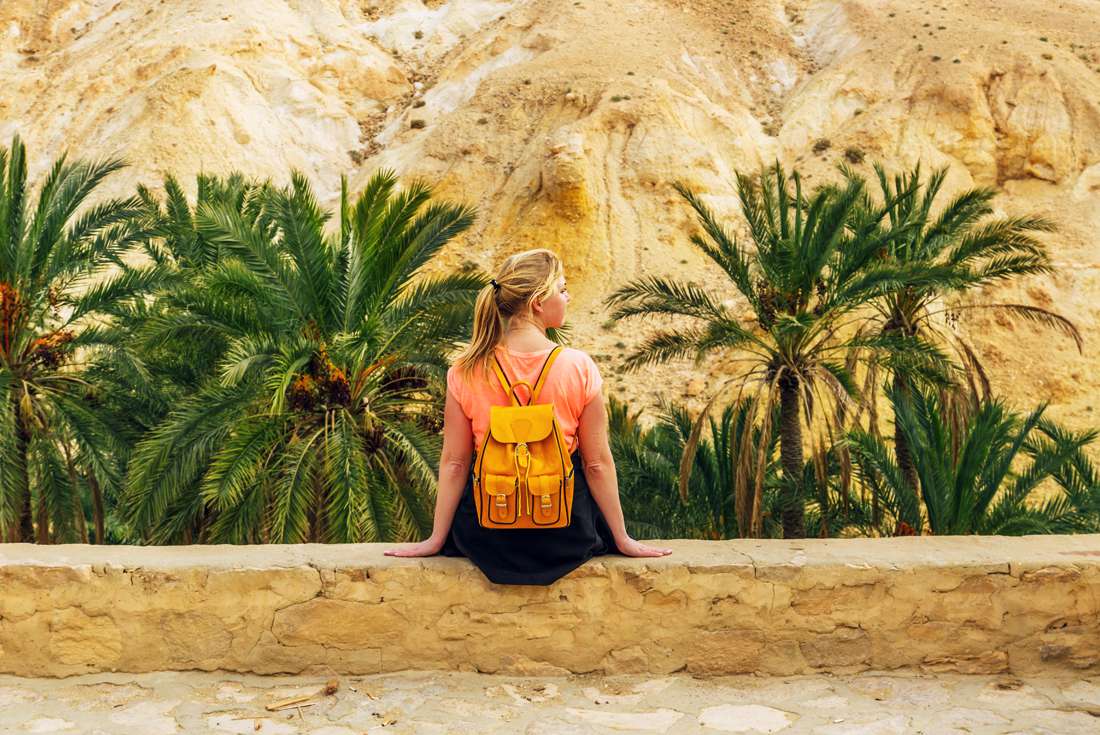 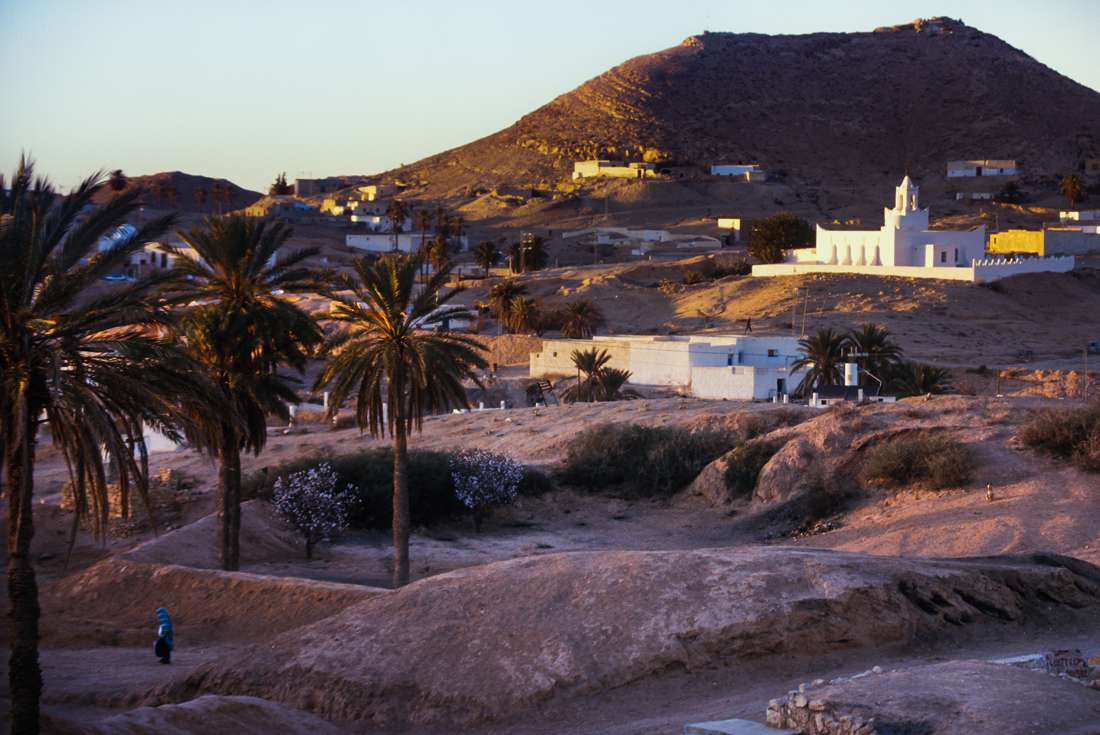 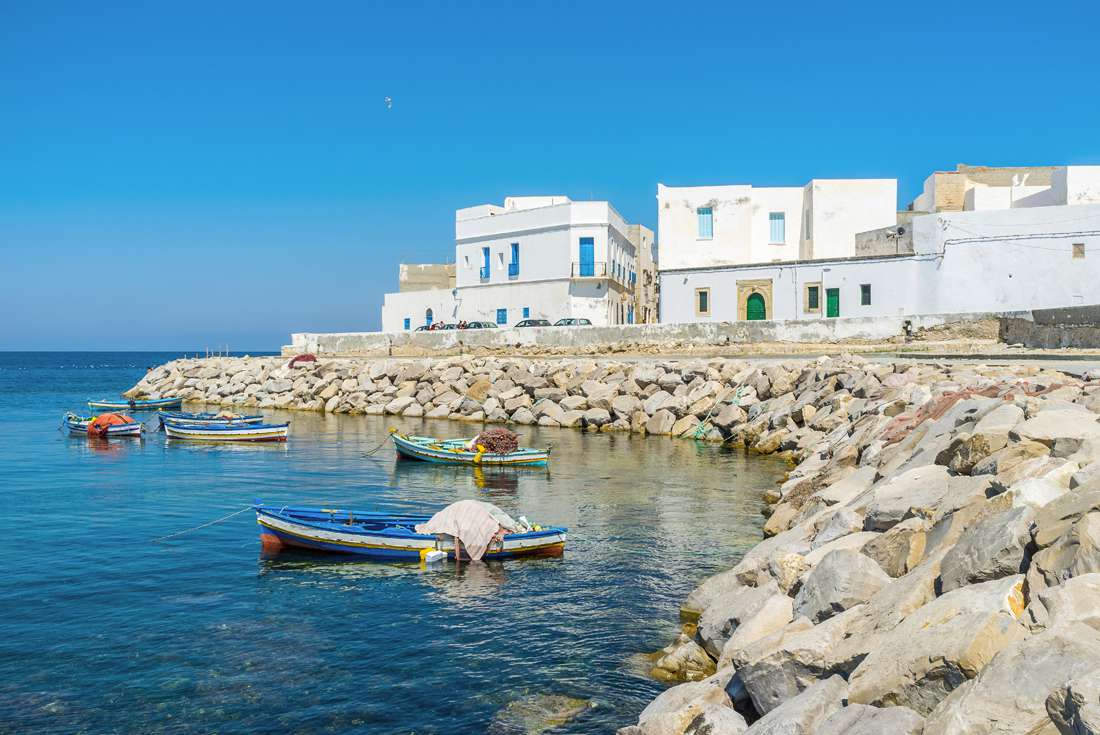 Salam! Welcome to Tunis, capital of Tunisia. The city has two main sections – the 19th-century ville nouvelle grid (created by French colonialists) and the eight-century medina where all alleyways lead to the Great Mosque. You’ll explore both tomorrow. Your adventure begins with a welcome meeting at 6 pm. If you have not booked an airport transfer, the best way to reach the hotel is by metered taxi. If you have spare time before the welcome meeting, maybe head out to sample some specialties like lablabi (chickpea soup), tajine (different from the Moroccan version), or, if you have a sweet tooth, bambalouni (deep fried donughut).

Start your day by travelling to the seaside town of Sidi Bou Said, where the white walls and blue shutters of the seaside village make for incredible photo opportunities. Wander the cobbled streets lined with cafes and local artisanal shops, and maybe try the famous local bomboloni (fried doughnut with sugar). Continue to the ninth-century World Heritage-listed Carthage to see monuments like the vast Antonine baths, the Roman amphitheatre and the Punic ports. Next up is the National Bardo Museum, second only to the Egyptian museum of Cairo in terms of the breadth and depth of its collections. Enjoy lunch in Sidi Bou Said, then make tracks for the Tunis Medina, the largest medina in North Africa. Walk through the twisting alleyways with your leader, passing shops overflowing with goods and visiting the Grand Souq des Chechias, where Tunisia’s iconic blood-red hats are made. In the evening return to Sidi and enjoy an included dinner at your hotel.

Make tracks for Dougga, one of the best-preserved Roman cities in Africa. Stop en route in Testour, where the architecture tells the story of the Muslim and Jewish refugees who arrived in the 16th–17th centuries. Explore Dougga with your leader. Once capital of both the Phoenician and Roman states, Dougga boasts many imposing monuments, including a second-century theatre, the Capitoline Temple, and the 2200-year-old Nubian Mausoleum of Ateban. Wonder at both the monuments and how quiet and tourist-free the site is. Hit the road for a final stretch to Kairouan, your destination for the evening.

After breakfast, head out to explore Kairouan, the fourth holiest site in Islam (after Mecca, Medina and Jerusalem). Discover more about the city with a visit the ninth-century Great Mosque of Oqba Ibn Nafi, an important example of Islamic architecture. Many of the columns throughout the complex were taken from the ruins of cities like Carthage. On a walk through the serpentine streets of the local medina, pass the souqs and get a tasty sample of makroudh (a traditional local pastry stuffed with dates) and learn about the traditional trade of local women – rug making. Continue to Tozeur for the evening.

Explore the oasis town of Tozeur, which is lined by extensive palm groves and was historically an important stop on the Bedouin caravan route. Check out the Eden Palm, a museum set in a beautiful building which tracks the history of dates and the uses for the palm tree. Later stroll through the 14th-century medina and admire the striking architecture and restored brick work. The rest of the day is free for you to explore at your leisure. Maybe visit the Dar Charait Museum, an ethnographic museum depicting scenes of traditional Tunisian life.

This morning hit the mountains on a 4WD tour of surrounding oases, which film buffs may recognise as the setting for scenes from 'The English Patient'. See the mountain oasis of Tamerza, along with Mides and Chebika. You’ll also see set pieces left over from the filming of Star Wars: Episode I – The Phantom Menace. Continue to Douz (approximately 2.5 hours), travelling across Chott El Jerid, the largest salt lake in the Sahara Desert. Take in the green and pink hues of the lake as it streams by. Arrive in Douz and meet your camel drivers. Get a brief lesson in desert etiquette then begin your trek into the Sahara (approximately 3 hours). While the journey to the camp is on foot, the camels will carry your luggage and assist anyone who is tired. Arrive at the camp just before sunset. Enjoy dinner and settle in for a peaceful night under the stars.

Enjoy breakfast while you gaze out at the undulating dunes of the Sahara. Spend the morning in this incredible landscape before the trek back to Douz (approximately 3 hours). Local Berber guides accompany you during the trek to teach you some secrets of life in the desert. Arrive in Douz at nightfall.

Continue to Matmata, stopping en route in Toujane to visit the ruins of an old Kasbah, a centuries-old olive press and other artefacts. Arrive in Matmata and explore some of the local dwellings, underground houses that might look familiar as the setting of Luke Skywalker’s home in Star Wars’. The ingenious homes are a joy to explore, though in recent years migration to cities has seen many fall into disrepair. Embark on an approximately 3.5-hour hike through the rocky, mountainous desert and snap some incredible photos. Your accommodation tonight is in a unique cave building.

Head to Mahdia, stopping en route at the spectacular Roman amphitheatre of El Jem. This third-century structure resembles Rome’s Colosseum and rises above the surrounding city in impressive fashion. Arrive in seaside Mahdia, a relaxed port town, in the afternoon. Perhaps head out to the 16th-century Ottoman fort or the waterfront cemetery. Have your camera charged and ready for action.

This morning check out the whitewashed local medina, then head out to explore the artisan village of Moknine. Visit the folk museum to see some of the fine ceramics and jewellery produced here. Decide as a group whether to stay for lunch before continuing to Monastir. In Monastir explore the seafront ribat (fortress), which was originally a defensive fort built to withstand Christian invasions, as well as important centre of Islamic learning. Climb 90 steep steps to the ribat’s watchtower for panoramic views of the city. Return to Mahdia in the afternoon and enjoy free time. Maybe treat yourself to some good old-fashioned Mediterranean fun and relax on the beach. Return to Mahdia in the afternoon and maybe treat yourself to some R&R and hit the beaches for some good old Mediterranean style fun.

Return to Tunis, with a few sightseeing stops en route. First up is the city of Nabeul, famous for its ceramic workshops as the local clay is perfect for crafting delicate coquetry. You’ll have a little time to look around and perhaps pick up a souvenir or two. Continue to the small fishing town of Kelibia, where the streets are busy with workshops and a striking castle fort dominates the skyline. Next, stop at the World Heritage-listed Kerkouane, the ruins of a Phoenician town where artefacts have been uncovered from over 2300 years ago. The last stop is the mountain of Haouaria, which sits in a beautiful landscape overlooking Cape Bon. Arrive in Tunisia in the evening and decide whether to join an optional dinner with your group.

The trip comes to an end in Tunis this morning.