Mongolia Expedition: Wilderness of the West

Mongolia Expedition: Wilderness of the West

Traverse the far west of Mongolia, where the landscape drastically changes from the largest sand dunes in the country to crystal clear lakes and snow-capped mountains.. Stay with a family in Chandmani, famous for its traditional ‘throat singing’, and immerse yourself in music that captures a love for nature, family and animals.. Visit a World Heritage-listed petroglyph site with carvings from the Bronze Age and hike to a cave that features rock art painted over 15,000 years ago.. Join an intimate celebration to open the eagle hunting and falconry season and visit a traditional falconry school to learn about this proud Kazah tradition.

This journey takes you into the wild west of Mongolia, a place where crystal-clear lakes, snow-capped peaks and giant dunes whisper the legendary stories of nomads and nature. Be mesmerised by khoomii (traditional throat singing), be welcomed into the gers of nomadic families, spot wildlife like ibex, argali sheep and the elusive snow leopard, and join Kazakh eagle hunters at a tight-knit local celebration. Beginning and ending in Ulaanbaatar, this adventure unveils the true spirit of Mongolia’s wild west on an epic road trip with an unimaginably beautiful backdrop. 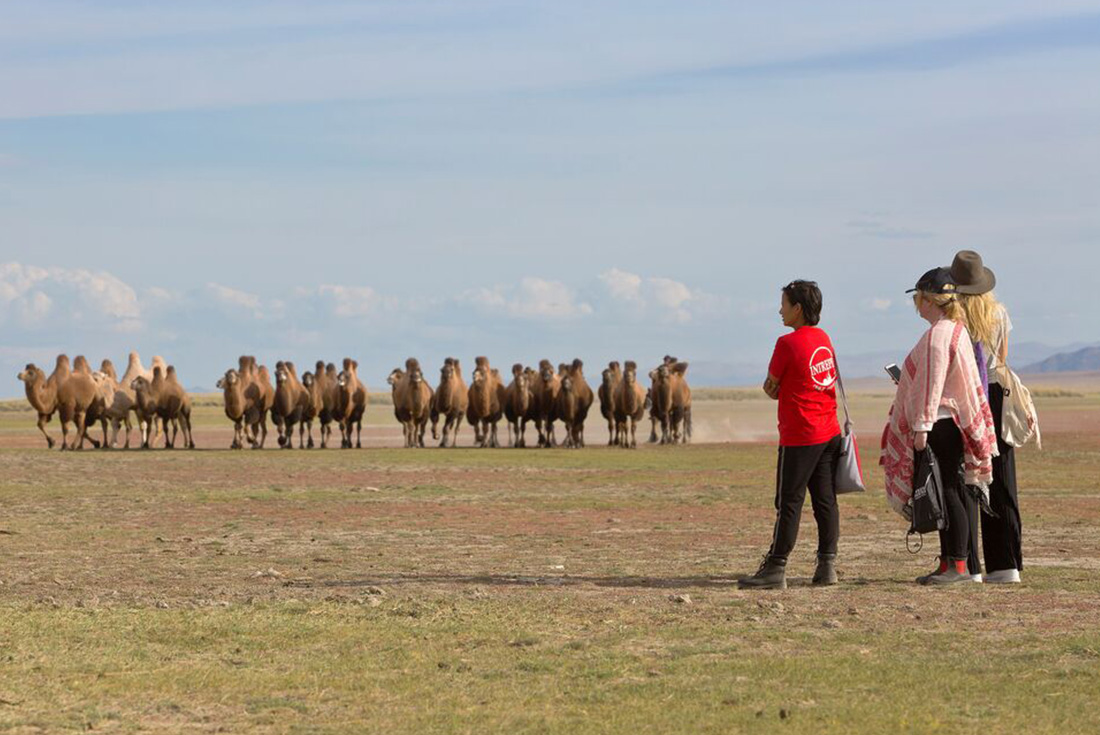 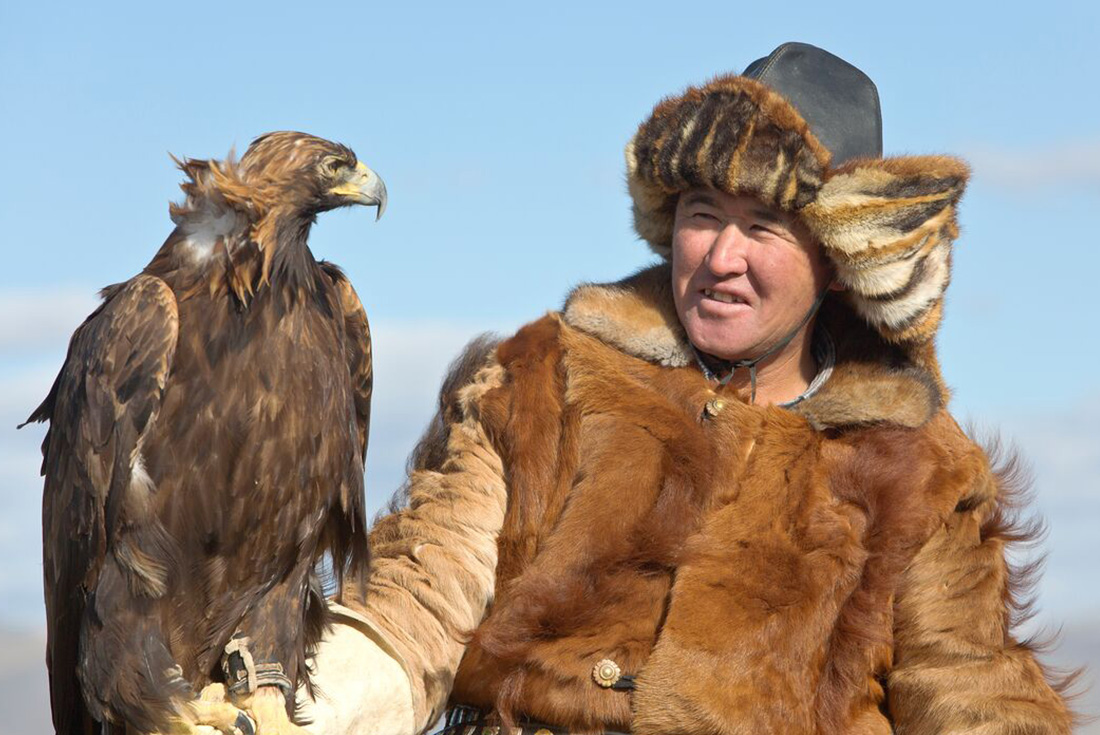 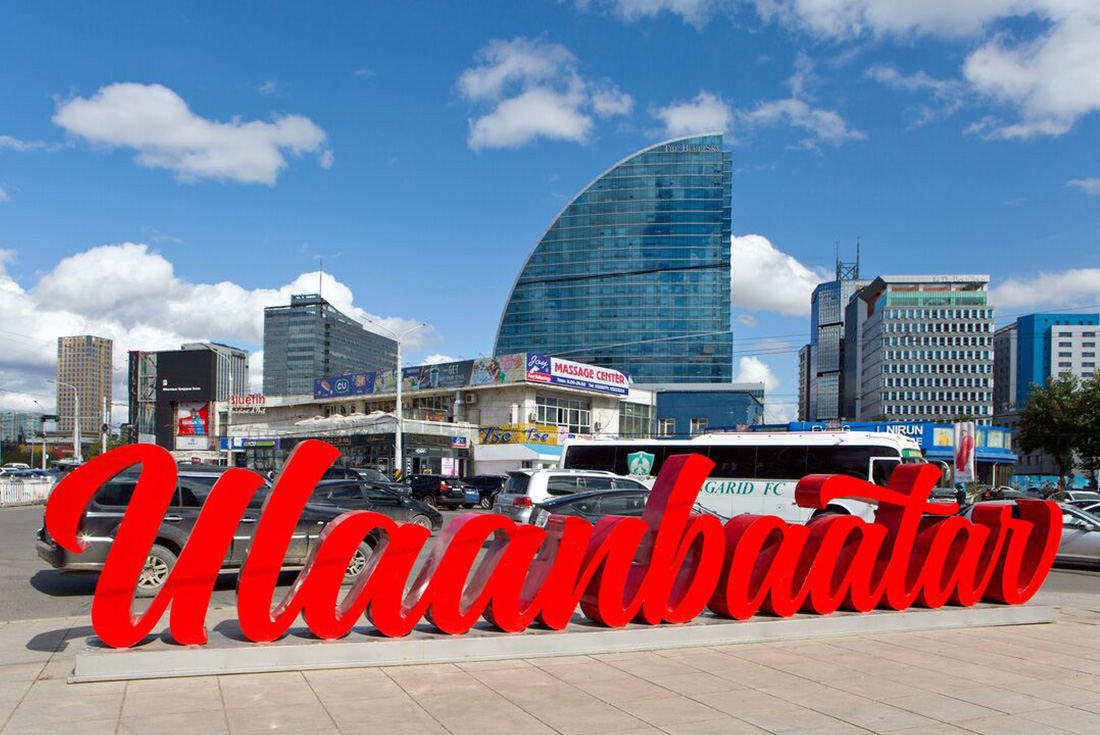 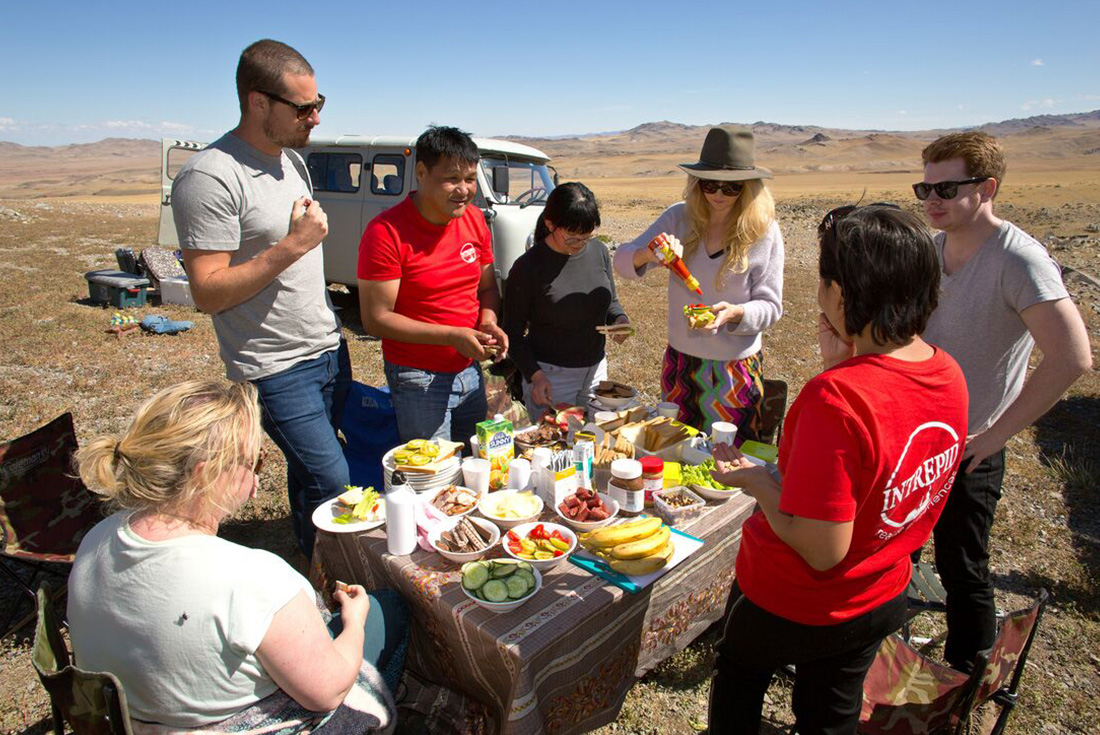 Sain baina uu! Welcome to vast Mongolia, the ‘Land of the Blue Sky’. Your trip officially begins with a group meeting at 6 pm. Afterwards, choose whether to join your fellow travellers for an optional dinner at a local restaurant. If you arrive in town with some spare time before the meeting, be sure to get out and explore Ulaanbaatar – UB – a fascinating city where modernity mixes with tradition. The Fine Arts Museum and Winter Palace Museum of Bogd Khan are both great introductions to Mongolia.

Modern Mongolia is a fiercely independent nation that's trying to hold on to its traditional heritage and wild spirit in the face of immense challenges and change. Learn more about the country's storied history on a tour of Ulaanbaatar, beginning with a visit to Gandan Monastery, one of the largest and most important Buddhist monasteries in Mongolia. Climb Zaisan Hill for a bird's-eye view of the ever expanding city and its ger suburbs, then explore the National Museum of Mongolia to learn about the country's past struggles and glories before finishing up at Sukhbaatar Square. The rest of the afternoon and the evening are for you to do as you please, but we recommend checking out the International Intellectual Museum, an institution dedicated to all things puzzles and games.

The road trip begins today as you depart UB on an early morning flight to Uliastai (approximately 3 hours). Located in Western Mongolia, Uliastal is the capital of the Zavkhan Province and is surrounded by mountains. Meet your drivers at the airport and hop in a 'furgon', a trusty Russian van and the main form of transport for the rest of the journey. Drive approximately 3 hours to Ereen Lake, which is surrounded by the biggest sand dunes in Mongolia. Explore the area by camel and listen to the famous sounds of the sand dunes, which ‘sing’ in a strong wind or when the top sand slides across the surface. Tonight, enjoy your first ger experience in the Mongolian wilds. Settle into camp and enjoy the serenity and getting to know your fellow travellers.

Buckle up for a long drive today (approximately 6 hours) to Dorgon Lake, stopping en route at the Soljir petroglyphs site to view carvings dating back to the Bronze Age. These carvings depict wild animals including ibex, camels and more, as well as some hunting scenes. The site has never been fully researched or studied, so it's a little-known destination. Take a short hike to reach the site, then enjoy time to explore and eat lunch. Continue to Dorgon Lake, which covers an area over 300 square kilometres. With an average depth of 14 metres, this saltwater lake makes up part of the Khar Us Nuur National Park, a huge region encapsulating lakes, mountains and vast open plains. Settle into your tourist ger camp and soak up the stillness and majesty of the area with your group.

Travel approximately 4 hours to the Chandmani district, the legendary birthplace of khoomii, also known as overtone or ‘throat singing’. The origin of this mesmerising style of singing is said to be the sound of water running between rocks in the mythical River Eev, while some lore connects the practice with other natural and supernatural events. Though nobody knows the exact location of the mythical River Eev, the Tuvans, Uriangkai and Western Khalk Mongolians all agree that khoomii is connected to the river's magic. Many Chandmani men are gifted in the practice and tonight you'll learn about the practice during your stay with a local family in their ger.

Farewell your local hosts and drive approximately 3 hours to Tsagaan Sair Valley. This valley lies in the Jargalant Khairkhan mountains, an area sacred to the locals because the range determines the local climate and pastures that are of such importance to their lives. Mongolian nomads utilise the area for pasture during part of the year and it is home to hundreds of ibex, argali sheep and an estimated 24 snow leopards, among others. These mountains are also where the first ancient Altai Harp was unearthed, from the tomb of a fully armed young warrior. Take a hike through the beautiful landscape and spend the evening at a guest ger that was set up by some of the locals.

Make the most of another day spent in this incredible landscape and continue to explore the Tsagaan Sair Valley. The group will take a short drive and begin hiking, looking out for ibex and wild argali sheep among the rocky surroundings. The argali live in high alpine areas and can weigh a mammoth 180 kilograms when fully grown, and the males have particularly impressive curved horns. They're also a favourite prey of the enigmatic snow leopard, and if you're lucky you may see evidence of the leopard's presence in the area. The length and nature of the hike today will depend on the weather and the group's fitness level, but one thing is certain – this is a spectacular region to explore on foot. Spend the evening back at the guest ger sharing a meal and stories with your group.

Start the day with an approximately 2-hour drive to Khoid Tsenkher Cave. Located above the Khoid Tsenkher River, this cave is famous for its rock art paintings, which were discovered in the 1960s and date back to the Paleolithic period (15–20,000 years ago). Entering the cave involves a bit of a scramble, which your leader can help you with, but once inside you'll find images of argali sheep, ibexes, camels, lions, elephants and ostriches. After visiting the cave, continue 2 hours to Khar Us Lake, one of the largest freshwater lakes in all of Mongolia. The lake covers an area of 15,800 square kilometres and the little islands dotting the surface are home to wild ducks, geese, wood grouse, partridges and on occasion migratory sea birds. Spend another evening in a tourist ger camp by the lake.

The best time for birdwatching is early morning and you may well be rewarded if you manage to drag yourself out of your ger. Enjoy a few more hours at the camp then depart for Khovd after lunch. The journey should take around 2 hours, and after the last few days of nature and wilderness, the small, multicultural town of Khovd will feel like a thriving metropolis. Established in the 18th century by the Manchus of China's Qing Dynasty, Khovd has long been a trade and business centre in Mongolia's west. It's now home to many different ethnic groups including the Zakchin, Uriankhai and Torguud peoples. Explore the city with your leader then perhaps take some time to shop for supplies or connect with your friends and family back home online. Mix things up in the evening and swap a traditional ger for a local hotel – talk about cosmopolitan!

Today travel approximately 5 hours to the town of Olgii, the capital of Mongolia's Bayan-Olgii Province. Stop for lunch en route with views of Tsambagarav, a permanently snow-capped mountain that attracts both Mongolian and international alpinists. It’s peak sits at just over 4000 metres and the surrounding national park – replete with glaciers and lakes – is also inhabited by snow leopards. Stretch your legs after lunch on a short hike to a viewpoint. Continue to Olgii, which sits among the Altai Mountains and was first established by Kazakhs fleeing the Russian empire during the 1840s. It's a similar size to Khovd – around 30,000 people – and hosts the Golden Eagle Festival every year to showcase the ancient form of hunting. Following a period of struggle between China and the USSR that led to the suppression of traditional Kazakh culture, other traditions are also being revived here. Stay overnight in a tourist ger camp.

Travel to Sagsai this morning (approximately 1 hour) for the opening ceremony of a small local festival that celebrates the opening of the local eagle hunting and falconry season. It's organised by a close network of friends and attended by about 40 berkutchi AKA eagle hunters. Though the event is traditionally male only, a few female hunters have also attended in recent years. The celebrations include competitions and events, including prizes for the best-looking eagle, best-dressed berkutchi and best-decorated horse. Other contests include tenge ilu, where horsemen grab coins from the ground at full gallop to determine the most skilled, and a competition to see whose eagle catches a dummy rabbit or fox in the shortest time. Spend the night in a ger managed by some local friends.

Visit a recently opened falconry school and meet the eagle hunters to learn more about their training and traditions. The school plays an important role not only in educating eager young Kazakhs about traditional hunting, but also in preventing eagle hunting from becoming commercialised or exploitative and protecting the wild eagle population. The hunters will share some fascinating insights into how they catch eaglets, communicate and feed the birds, train them to hunt, and how and when they release them back into the wild. Spend some time discussing these things with both the hunters and students on a walk, during which you'll learn more about the local landscape and wildlife from those that know it best. Return to Olgii (approximately 1 hour) in the afternoon and enjoy a Kazakh folk concert in the evening before retiring to the hotel.