It’s unlikely you’ll have many other chances to get this isolated in Central Asia and do the amazing things that you will experience on this expedition. This is a trip of unmatched adventure and is defintiely one to show off about.. Walk the most spectacular mountain pass into the Chulyshman River Valley with your small group. This road is like nothing you would have encountered before, and you’ll be camping right in its heart.. On your way to the Karakol Valley, stop by the Anokhin Museum in Gorno-Altaisk to see the Siberian Ice Maiden – the 2500-year-old mummified remains of a Eurasian woman only discovered in the 1990s.. Take on the mighty Pontanin Glacier – the longest in Mongolia – on a trek through the Altai Tavan Bogd National Park. Your expert local guides will get you up close and personal to this beast of nature.

Go wild – very wild – as you unlock the beauty of the Altai Mountains on an 18-day far-out adventure through Kazakhstan, Russia and Mongolia. Beginning in Nur-Sultan (Astana), travel to the depths of Russia and the Uch-Enmek National Park, making your way to some of the most isolated and spectacular mountain passes in the world. Weave your way into western Mongolia and discover the secrets of the Ice Age with a glacier trek in the Altai Tavan Bogd National Park, and see truly wild Takhi horses in Khustain National Park. If you crave those weird and wonderful places, then this is about as uncharted as you can get. So much so, that our inaugural Intrepid Uncharted Expedition, which this trip is based on, sold out in days. This definitely isn’t the usual itinerary you’ll pick up from your local travel agent. 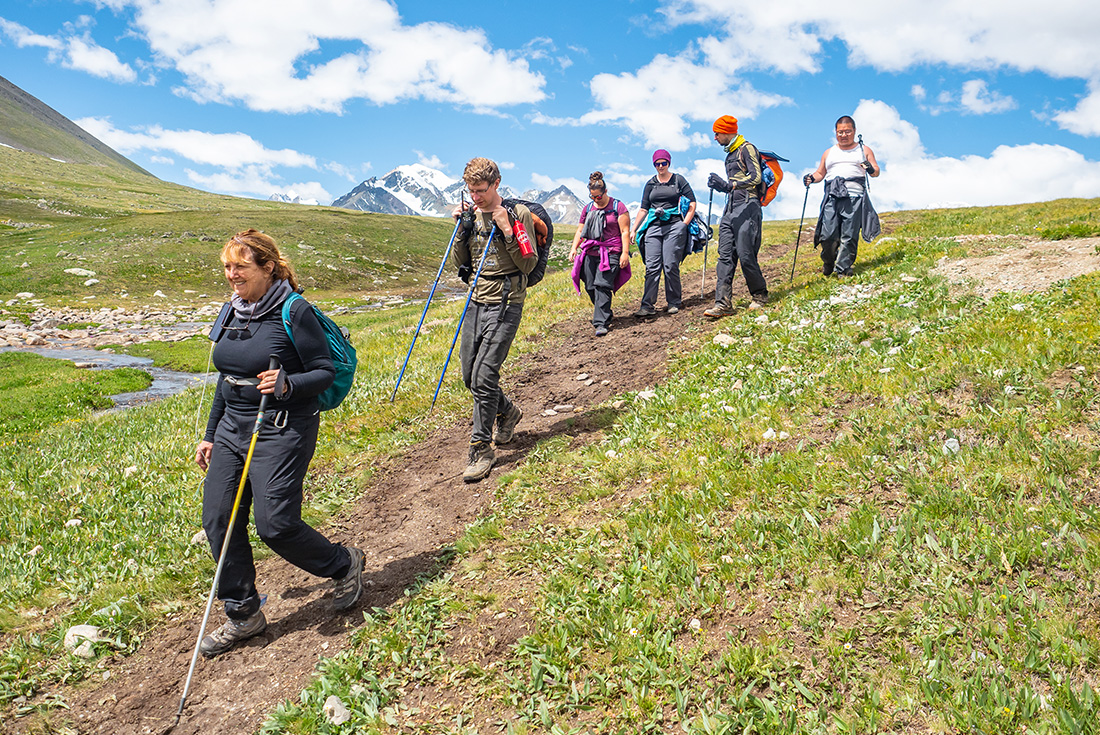 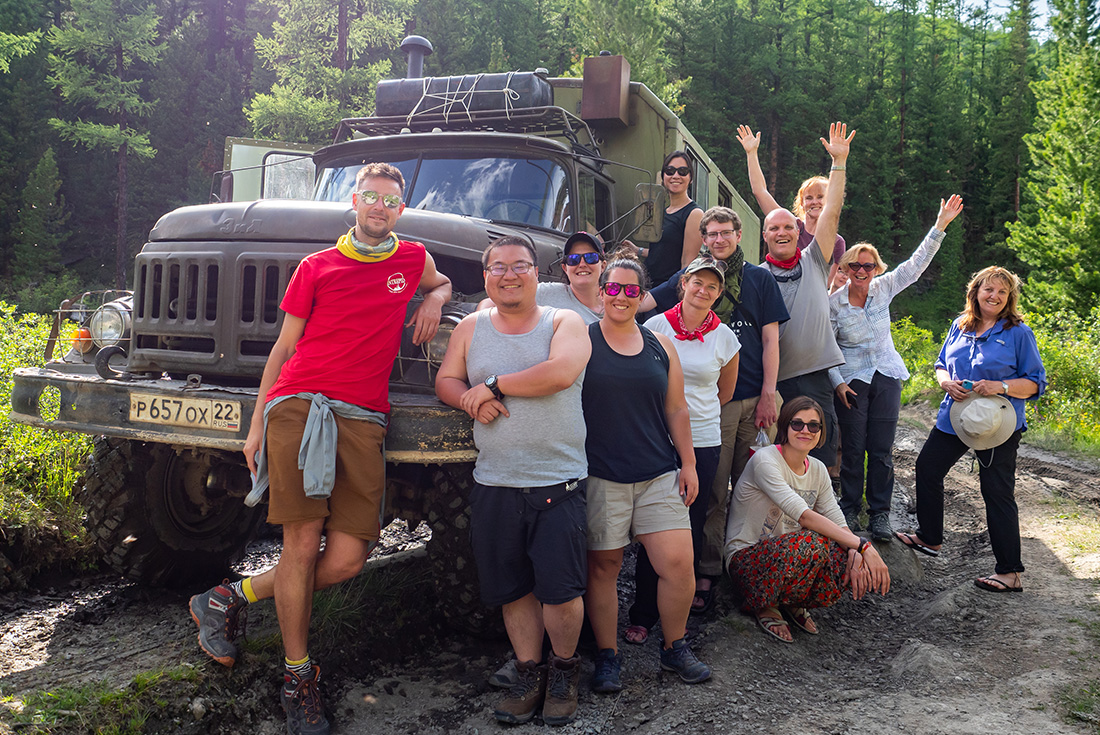 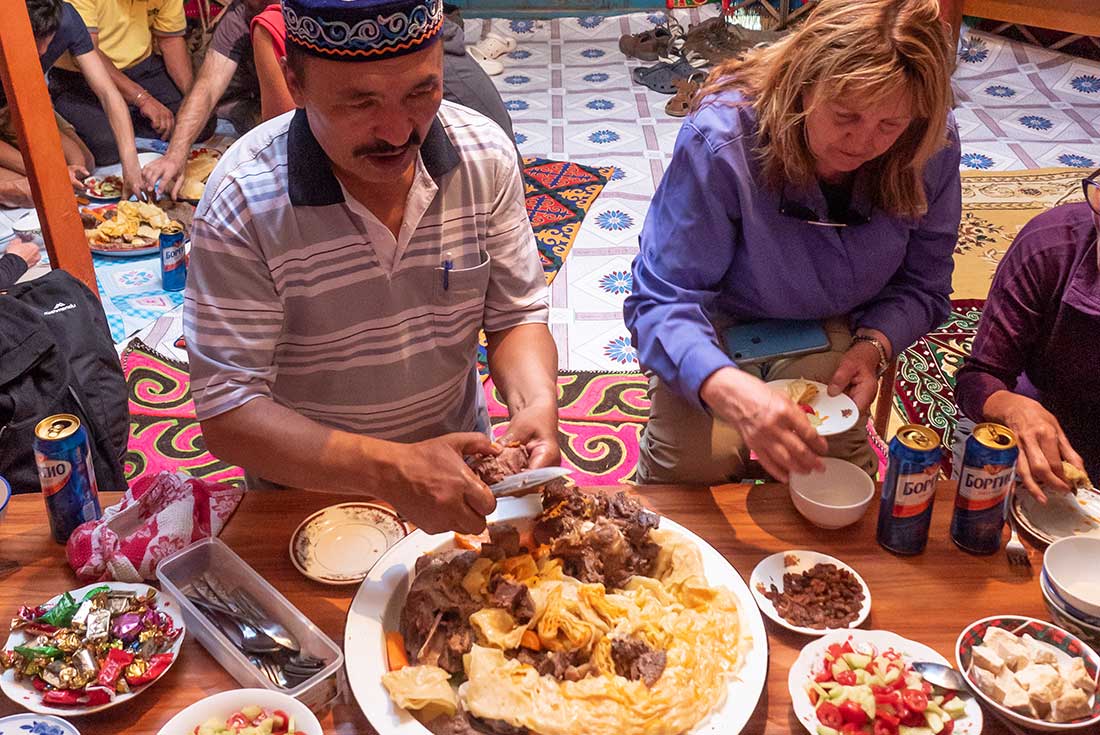 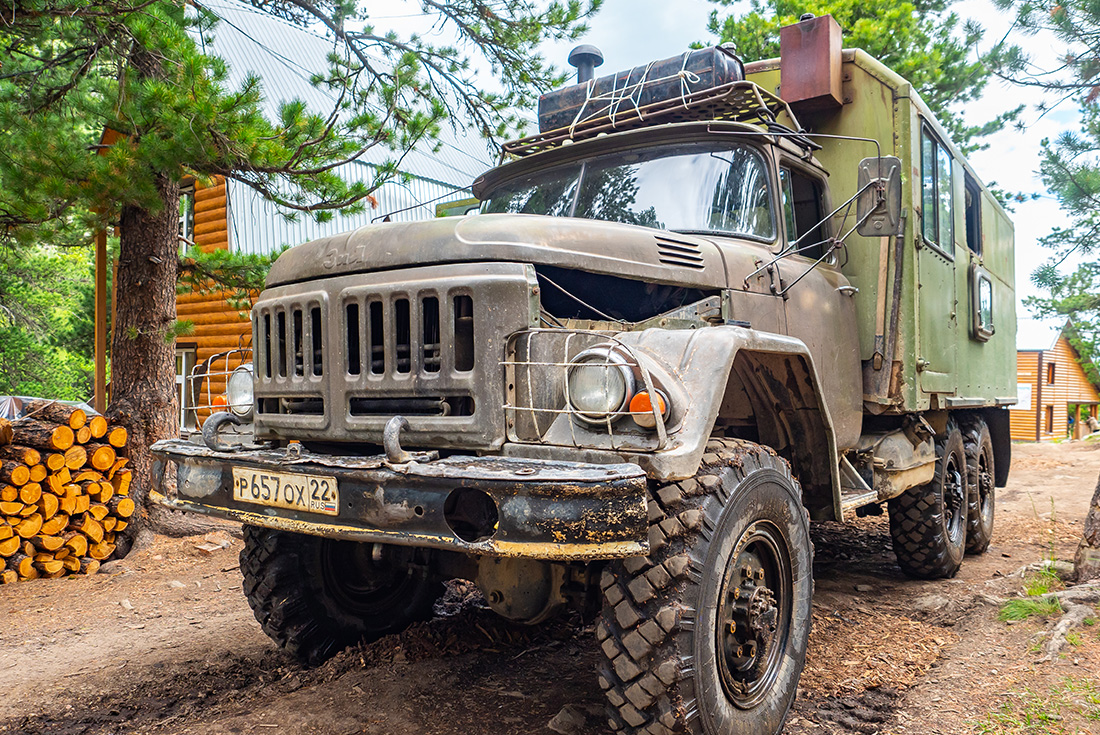 Welcome to Nur-Sultan – the newly named capital of Kazakhstan! There are no activities planned for today until an important welcome meeting at 6 pm, where you’ll meet your group leader and travel pals joining you for this unique adventure. Until then, why not get out and about to explore what’s touted as the ‘Singapore of the Steppe’, and check out the futuristic buildings, opulent mosques and public gardens around town. Otherwise, hole up in one of the traditional restaurants on Turan Avenue for some shashlik kebabs and hot boursaky bread.

Get to know your fellow travellers as well as Kazakhstan’s grand capital on a city tour of Nur-Sultan. Around twenty years ago, this city didn’t exist, but then President Nursultan Nazarbayev decided to ditch the old capital Almaty (some 1200 kilometres away) and completely rebuild here. Walking from Independence Square, you’ll pass the Khazret Sultan Mosque – the largest of its kind in central Asia – and continue along the Ishim River, down Nurzhol Boulevard to the Bayterek Monument and Round Square. Expect to see towering skyscrapers, gold-domed mosques and the stately Presidential Palace during the tour. Your group leader will also likely introduce you to more of Kazakhstan’s traditional foods. Tonight, board an overnight train bound for Barnaul (approximately 24 hours).

You’ve got a full day on the train today, so make sure you’ve stocked up on snacks and have a good book to read or podcast to listen to. During the day, you’ll be crossing the Kazakhstan border into Russia. Arrive in Barnaul late at night and transfer to your hotel.

This morning, drive to Gorno-Altaisk (approximately 3 hours; 250 kilometres) and visit the Anokhin Museum, home to the famous Siberian Ice Maiden. Also known as the Princess of Ukok, the 2500-year-old mummified remains are those of a woman who lived on the Eurasian Steppes in the fifth century BC, and were only discovered by archaeologists in the early 1990s. When her body was exhumed, researchers also discovered clothing, headdresses and a small bag of cannabis, and her preserved skin had a deer-shaped tattoo on one of the shoulders! After spending some time at the museum, continue your drive towards Lake Teletskoye (approximately 3 hours). Lake Teletskoye – or Altyn-Kol, meaning ‘Golden Lake’ – is a stunning body of water in the Altai Mountains with around 70 rivers, including the Chulyshman, flowing into it. You’ll stay in a nearby guesthouse in Artybash overnight, so relax and take in the serene atmosphere.

Enjoy the scenic vistas and the crisp valley air during a boat trip on Lake Teletskoye, covering a large section of the lake and some of the most remote sections and the most beautiful waterfalls in the national park. Afterwards, set off and drive towards the Karakol Valley and Uch-Enmek National Park via the Seminsky Pass (approximately 6 hours; 350 kilometres). Uch-Enmek roughly translates to ‘three peaks’ – referencing the mountain’s three crests – and is known as an ethno-cultural nature park, as there are many culturally significant sites sacred to the local Altai people in the park’s confines. Uch-Enmek was created in 2001 to protect the natural, cultural and historical locations in the Karakol Valley, part of the Ongudaisky district in the Altai Republic. Tonight, stay in a local family homestay to understand the customs and cultures of this small community, before exploring the park tomorrow.

You’ve got all day to explore the stunning wilderness of Karakol Valley and Uch-Enmek National Park – one of the most ethnically diverse and interesting reserves of the Altai. The valley is rarely visited by outsiders. There’s no alcohol for sale here, men wear traditional hats, and the entire community (three villages with a total population of less than 1000) are ethnic Altais. The local religion is Burkhanism, which combines elements of pre-Shamanism, Shamanism, Lamaism and Orthodox Christianity. Burkhanist beliefs include not collecting water after dark so as not to anger the spirits, and not climbing mountains considered sacred. Visit some of the ancient Scythian burial sites and have lunch in the valley with a local family learning about their customs and traditions. Afterwards, return to your hotel for the evening.

Get ready for a big day today, as you drive to the Katu-Yarik Pass (approximately 270 kilometres). This is one of the most hair-raising roads in the world, and you’ll walk the steepest parts (about 3-4 km) which usually takes around 1.5 hours. On the way, you’ll pass some stunning natural wonders such as the Chike Taman Pass (1300 m above sea level), the merging of two powerful Altai rivers – the Chuya and Katun, and Kidelu Lake, framed by the snow-capped mountains. The larger Chulyshman River Valley is one of the world’s most striking canyons, but because of its isolation it’s still pretty unknown and unvisited. Admire the plummeting cliffs and the Chulyshman River weaving through a deep ravine that runs for over 130 kilometres. Tonight, stay in riverside cabins in the valley, and enjoy a traditional Russian barbecue dinner with your group. At your accommodation tonight, you’ll have access to a banya (a Russian-style bath), so soak up your surroundings, and if you’re game, dive into the river afterwards!

Today, breathe in the crisp mountain air and head off to visit the dramatic Mushroom Stones of the Altai. Locally known as Ak-Kurume, these unique rock formations have been caused by years of weathering and water erosion, and are tipped to disappear within the next century or so. The ‘hats’ of the mushroom seem as though they balance precariously on top of their ‘legs’, creating a unique landscape on the side of one of Chulyshman’s ridges. After exploring the surrounding area, you’ll stay in cabins nearby. The lush landscapes around you are a photographer’s dream at any time of the day, so make sure you’ve charged your camera batteries before heading deep into the wild.

As the old adage says, what goes down, must come up (or something like that). Bid the spectacular Chulyshman River Valley farewell today as you climb back up the Katu-Yarik Pass on foot – this time you’re going uphill, so it may take a little bit longer (approximately 2 hours). Once the group has tackled the pass once more, hop back in your private vehicle and drive back to Chibit for the evening. This small village is the perfect rest stop before heading into Mongolia, with comfortable lodgings and shower facilities.

Settle in for another long day of driving today (approximately 4-5 hours; 240 kilometres) as you make your way to the Mongolian border. This is another very remote border that sees very little non-local traffic, so a bit of patience will go a long way. At the border, you’ll say goodbye to your local guides, and you and your group leader will meet a local Mongolian crew who will join you for your journey. After all of the border formalities have been completed, continue to your nearby campsite where you’ll enjoy some lunch with the group. Tonight, as with quite a few of the nights on your Altai expedition, you’ll be very remote and isolated from the usual tourist facilities. Spend the afternoon setting up camp and your tent and relax into the slow life of rural Mongolia.

Today sees another full day of driving to the Altai Tavan Bogd National Park, via the Sogoo River and through Mongolia's highest mountain range. Being in the depths of Mongolia in a van is definitely not as bad as it sounds – think snow-capped mountains on the horizon, tiny ger villages on your path and enthusiastic guides and travellers sharing stories of the land and the local people. Deep in western Mongolia, the Altai Tavan Bogd National Park is a trekker’s paradise, and will be yours to explore over the next couple of days. Your accommodation tonight? A cosy tent at a local campsite.

You’ll be pleased to hear we’re not in the van at all today! But you’ll be super happy that you made the effort in the past couple of days to get to this remote national park. Today, you’ll be taking a hike to the Potanin Glacier, where you’ll spend the night at a camp used by mountaineers. The hike is 18 kilometres and will take all day, but the experience will be unforgettable. This section of Altai Tavan Bogd National Park is said to hold some answers for global warming, as many of the region’s glaciers through the Ice Age are said to have created the mountainous terrain. Researchers from around the world study these rock samples to unearth different causes of weather change, and you’ll be hiking right near all of this source material! Today’s hike isn’t easy, but luckily all of your gear will be carried by camels, who’ll accompany the group to the glacier.