Greece with Turkey by Land and Sea

Greece with Turkey by Land and Sea

Spend less time navigating and more time soaking up the history and majesty of Athens many sights under the guidance of a knowledgeable local.. Experience a different side of Greece in the medieval village of Dimitsana, a seventh-century mountain village, and grab coffee with a monk at a nearby monastery.. Indulge in freshly-baked pastries stuffed with cheese, hearty moussaka, grilled lamb, tzatziki and other local flavours in tavernas and small local restaurants.. Watch the spectacular colours of Santorini’s famous sunset bathe the caldera.

Explore the delights of Greece, plus a brief jaunt into Turkey, on this 16-day combined overland and cruising tour. This tour captures the ancient treasures, charming landscapes, sophisticated cities and turquoise coast that defines Greece. Wonder at the spectacular hanging monasteries of Meteora, dive into clear Aegean waters off the coast of uninhabited island Poliegos and stroll the cobbled streets of Santorini. Explore spectacular ruins with local guides, visit bustling white-washed old towns and unwind on the deck of your comfortable small ship with a drink in hand – this journey is a lesson in sun-soaked relaxation. 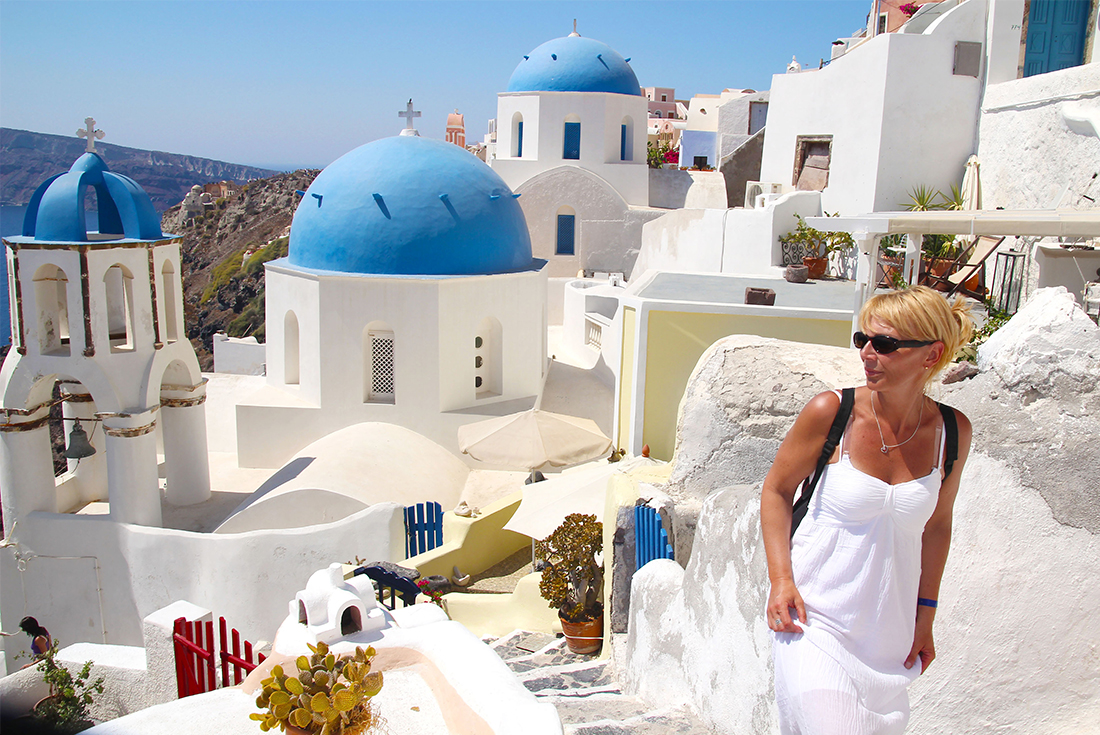 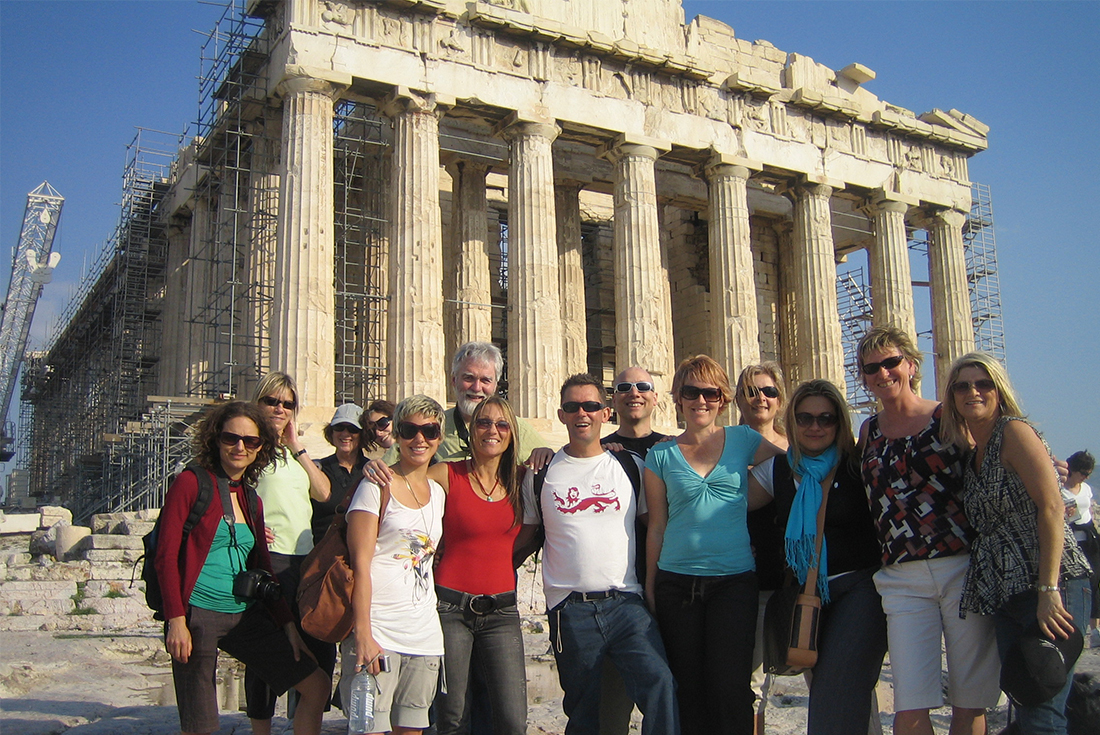 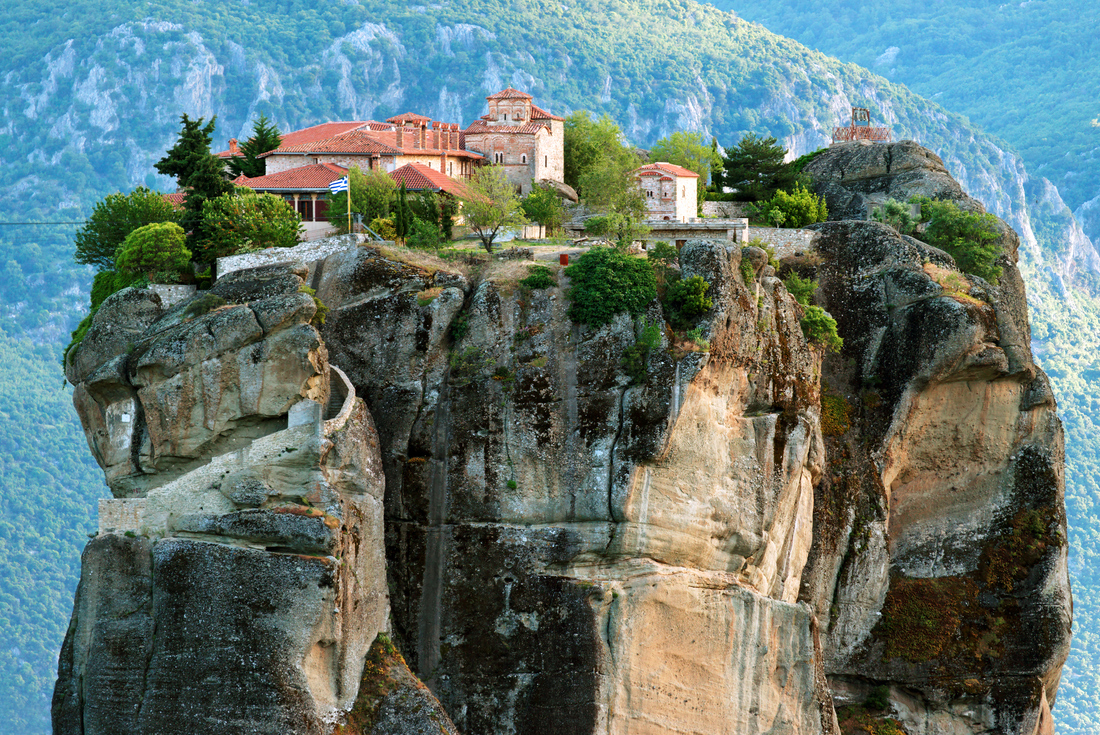 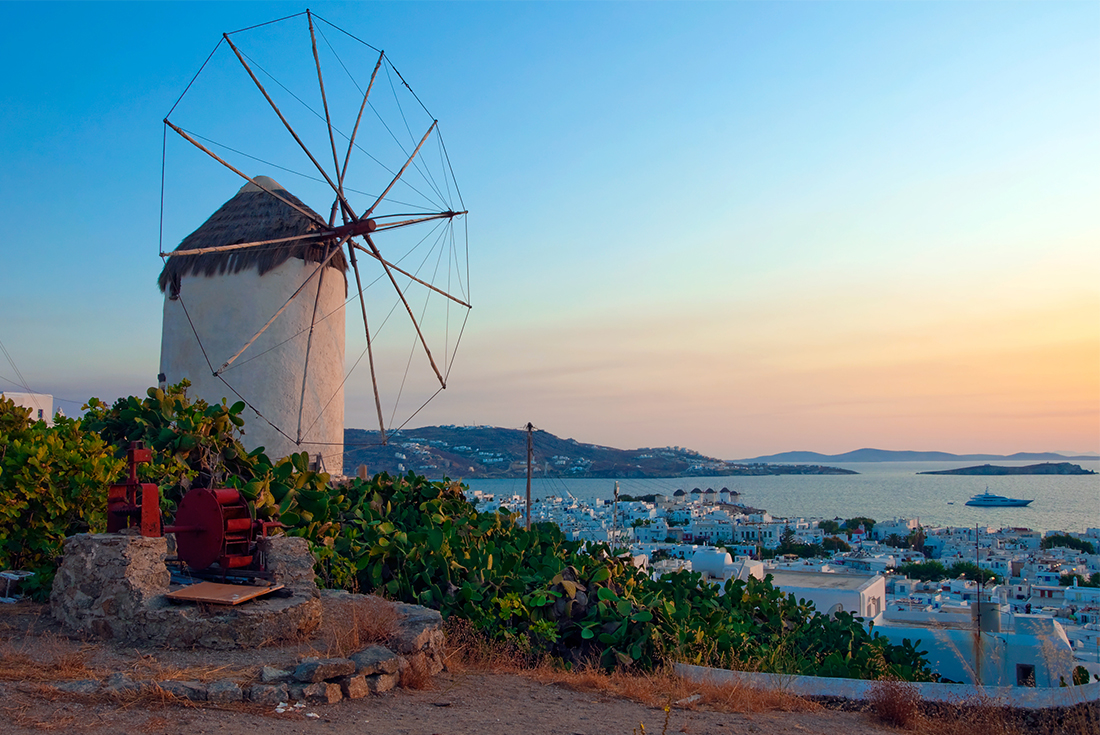 This journey begins in Athens, Greece's storied capital. There is a lot to do and see here in one of the world's oldest cities, so you may wish to arrive a few days early to allow time for exploration. The Archaeological Museum of Athens is highly recommended. There are no activities planned for today, other than an important welcome meeting this evening. Afterwards, head out for dinner with the group and sample some traditional Greek fare and maybe toast the beginning of the adventure with a glass of raki or ouzo.

Enjoy breakfast before travelling to Delphi (approximately 4 hours). On arrival visit the fascinating Sanctuary of Apollo in Ancient Delphi, home to the Delphi Oracle. Legend has it that Zeus released two eagles from different ends of the world, and Delphi was where they came together. Zeus then threw a Sacred Stone at this same point, making Delphi the centre of the world. Walk through the complex and explore the Temple of Apollo, the most important building of the site. This is where statues and offerings to the gods were housed, and where cult rituals took place. You will also see the Sanctuary of Athena, the 4th-century BC theatre and the well-preserved stadium during your visit. There will be free time to visit the Delphi Museum.

After an early morning drive (approximately 3.5 hours) arrive at the archaeological site of ancient Olympia. En-route stop at the village of Galaxidi or Nafpaktos for a visit to a traditional family-owned bakery offering pastries, stuffed with cheese, spinach, chicken or potato, and the famous sesame round bread. Chat to the owner and get updated on the latest gossip. Olympia is a complex that once comprised temples and public buildings, and was the site of the first Olympic Games. Over the centuries, and both during times of war and peace, the games were held every four years without exception. Even during periods of battle, the ancient games were bound by a sacred truce that required city states to cease fighting and travel to Olympia to compete. See all the major sites including the main stadium, gymnasium, wrestling school (palaestra), priest houses (theokoleon), Temple of Hera, Temple of Zeus and the hippodrome. After your exploration enjoy some free time to visit the museum, which houses the impressive marble statue of Hermes of Praxiteles and sculptured head of Hera. Next is the charming medieval village of Dimitsana (approximately 2 hours), where you will spend the next two nights at our feature stay. Dimitsana's charm lies in its location, set amidst magical mountains in Central Arcadia.

Today explore the central part of the Peloponnese peninsula and the spectacular Lousios Valley, one of the most scenic places in the central Arcadia region. Walk deep into the valley to the incredible working monastery of Prodromos. This wood and clay structure, which has stellar views over the valley below, was built precariously into a rock face. The local monks will show you around on a tour of their home and offer you a coffee or the local specialty, the Greek delight. As part of your visit you'll see the splendid 14th-century frescoes decorating the rock walls inside the chapel. Further along on our hike, visit the tenth-century Byzantine monastery of Philosophou. This monastery was the base for a secret school known as 'Kryfo Scholio', which was run by monks during Ottoman rule to teach Greek children their own language and religion. Later on, visit the medieval villages of Stemnitsa, Karitena (with a towering Crusader Castle) and Andritsena. Return to Dimitsana.

This morning drive to the delightful seaside town of Nafplion (Nafplio), the original Greek capital. In your free time you might choose to explore one of the town's three fortresses, or perhaps wander through the narrow winding streets filled with Venetian houses and neoclassical architecture. The seaside promenade is lined with a multitude of lively cafes and restaurants, making it a great place to watch local life unfold. If you're still unsure what to do, your friendly leader will be on hand to offer suggestions. Later, continue to ancient Epidaurus (Epidavros), the most famous healing centre of the Greek and Roman world. The highlight of Epidaurus is the third-century theatre, one of Greece's best-preserved classical structures. The theatre has incredible acoustics and is still used today for major performances. Return to Athens in the afternoon.

Today is free for you to enjoy Athens at your own pace. Explore the ancient ruins, find a restaurant with a view of the Acropolis for dinner or indulge in a bit of retail therapy. The choice is yours. though keep in mind you will enjoy a guided tour tomorrow. There will be a meeting at 6 pm to welcome any new travellers joining you on the next stage of your adventure.

This morning, check-out of the hotel and enjoy a guided city tour taking in the historic Plaka neighbourhood and the Acropolis. This afternoon, take a private transfer to port and board the vessel at about 3 pm, setting sail at around 4 pm. The first stop of your journey is Sounion, where a memorable sunset dinner awaits. Get to know your fellow travellers as you dine under the magnificent temple of Poseidon, the god of the sea in Greek mythology. At a towering 65 metres (213 feet) above the Aegean Sea, its marble columns have inspired many who came before, including poet Lord Byron. Sail overnight to Poliegos.

Arrive in Poliegos. Meaning ‘many goats’ in Greek, the aptly named island is uninhabited aside from a large goat population. Known for its untouched beaches, gorgeous rock formations and sea caves, it’s the perfect place to enjoy you first cruising excursion. Enjoy a swim in the clear Aegean Sea and a lunch barbecue on the beach before setting sail for Folegandros. Disembark and stretch your legs in the clifftop town of Hora, one of the oldest and most picturesque traditional towns in the Cyclades. Enjoy free time for dinner. Stay overnight at port.

Sail to los in the morning for a stop at Manganari Beach. Its remote location makes it a private paradise and an ideal spot for a relaxing morning swim. Enjoy a delicious onboard barbecue as you continue on to Santorini. In the afternoon, take a cable car from Thira Old Port up to town for a leader led orientation walk. Later transfer to Venetsanos Winery and enjoy some local tastings. Next stop is Oia for that picture- perfect view before having free time back in Thira to check out one of the many the local restaurants. Head back to the boat to relax and unwind perhaps under the stars on the deck.

Depart early for Amorgos and spend half a day touring the island. This tour includes a visit to the Monastery of Hozoviotissa (Monastery of the Virgin Mary). Built precariously into the face of a cliff, the 11th-century monastery offers breathtaking views of the Aegean Sea. Follow this with a stop at Aegiali Beach where there’s time to swim and enjoy a barbecue on the beach. Sail overnight to Samos. 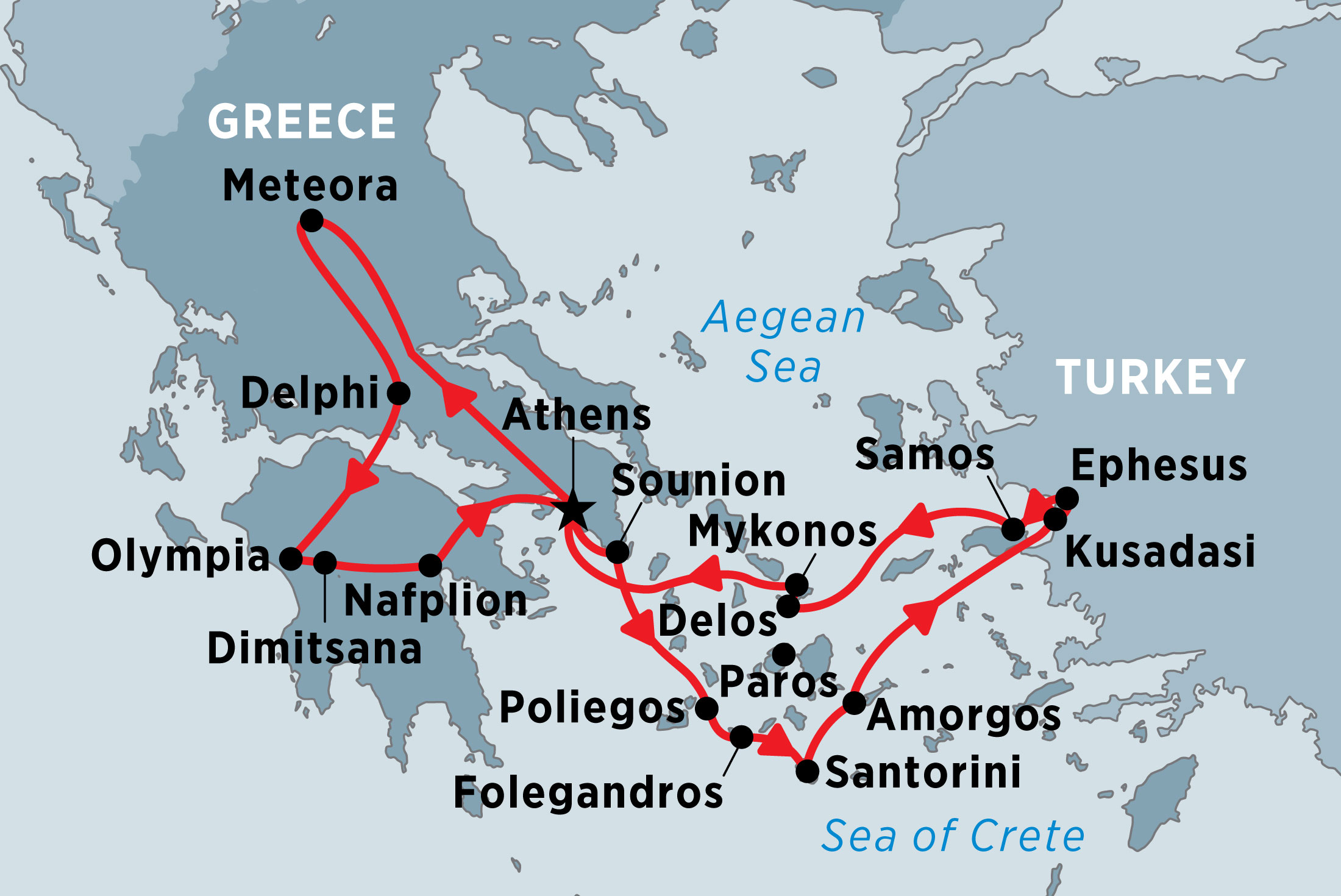