This is our most balanced and comprehensive Greece itinerary: a few handpicked highlights on the mainland, plus the best of the Cyclades and Crete.. You get to visit the sacred island of Delos for a half-day tour with a resident expert. It’s one of the most significant archaeological sites in all of antiquity.. This cruise ticks off the Greek Islands’ classic highlights (Mykonos, Santorini etc) but also visits some up-and-coming gems like Kythira and Monemvasia, a gorgeous fortified town.. Unlike mega liners, which have to moor offshore, The Harmony G can dock right in the centre of town. In places like Nafplion and Kea, you take one step off the gangplank and you’re surrounded by bars, markets and restaurants. You can hop on and off the boat as you please.

Explore the ancient wonders of Greece on this illuminating voyage of discovery. Aboard the state-of-the-art mega yacht Harmony V, take a cruising adventure in style to islands including Mykonos, Crete, Kythira and Hydra. Watch this world of volcanic islands, white house-dotted cliffs, and sparkling blue water float by. From Athens, discover the cosmopolitan lifestyle of Mykonos, experience the stunning natural drama of the caldera of Santorini, and sample local delicacies on Crete. Slip into the waters surrounding the perfect Greek islands of Kythira and Hydra. Navigate the ancient architecture of the fortified town of Monemvassia. Explore lands that host stories of some of the most familiar names in ancient Greek history. For sun on secluded beaches, a glimpse into the past, and an abundance of natural beauty, this best adventure cruise. 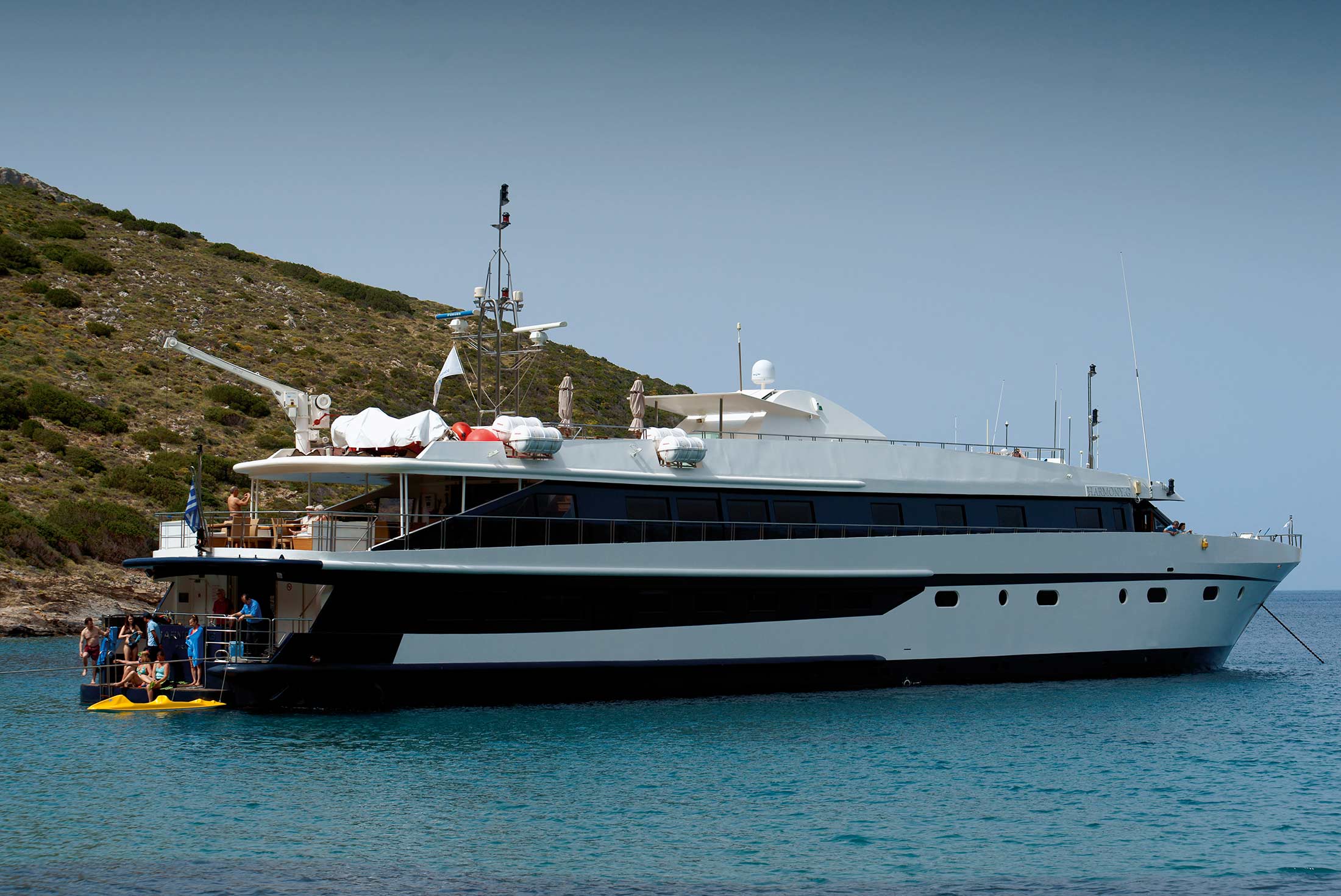 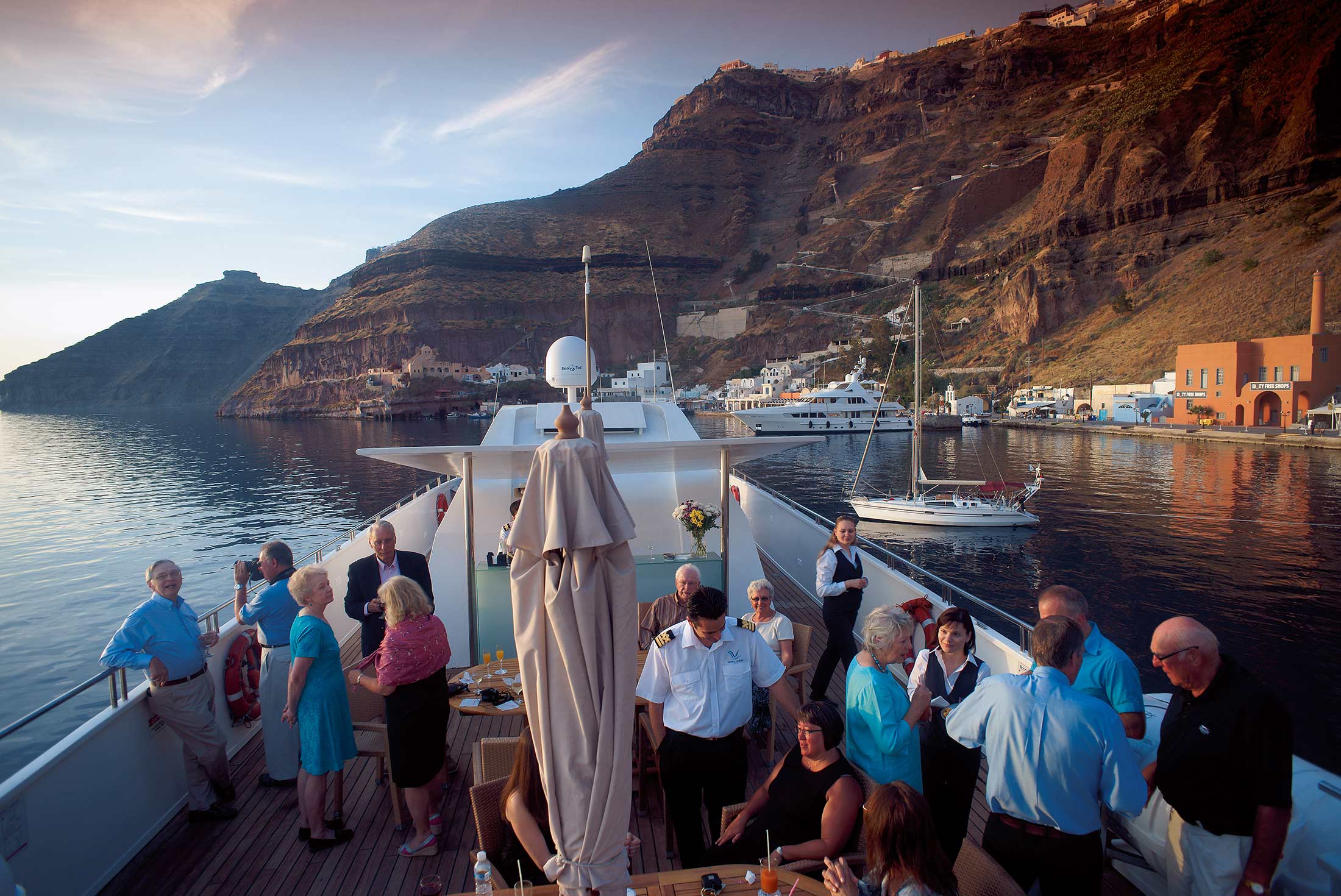 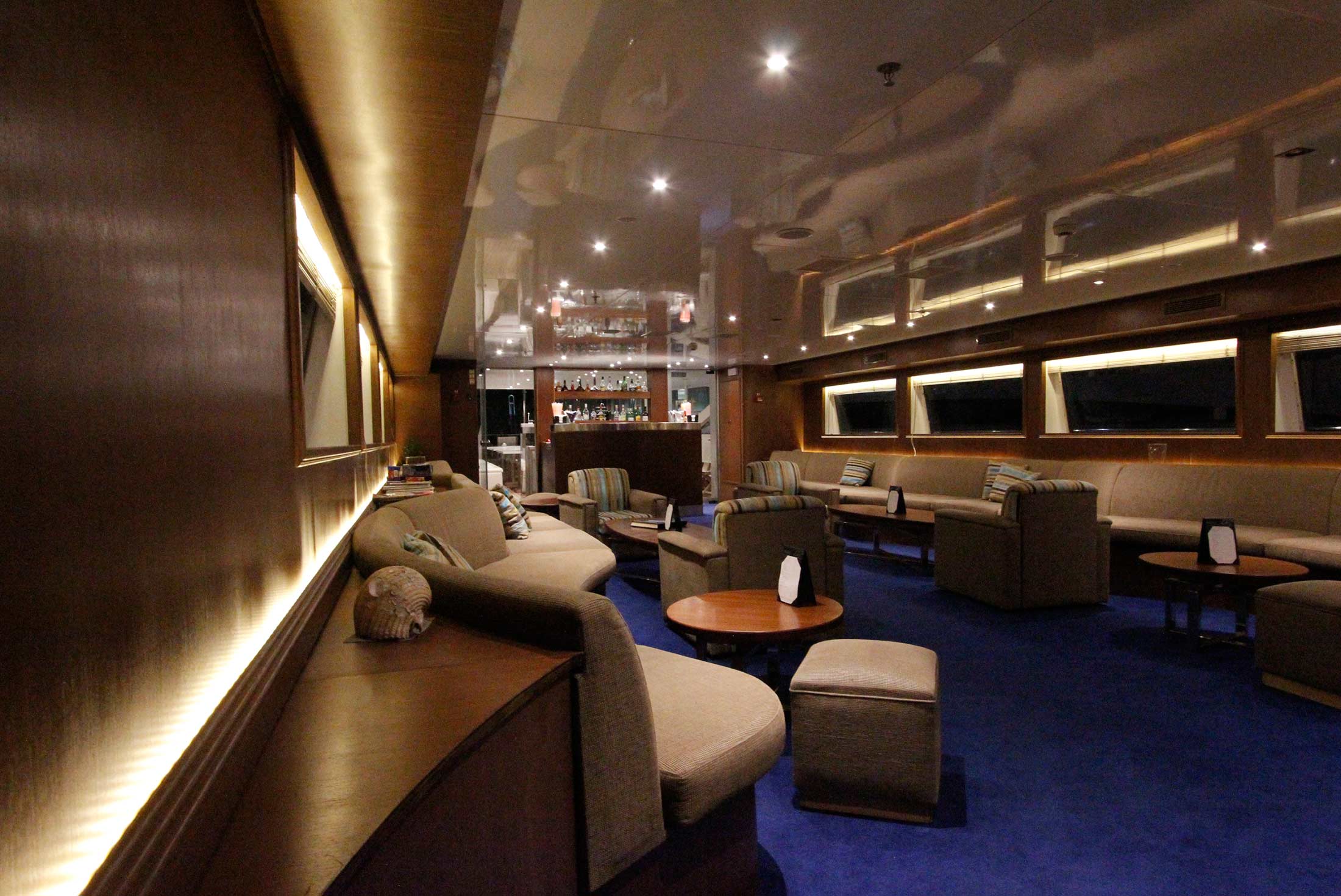 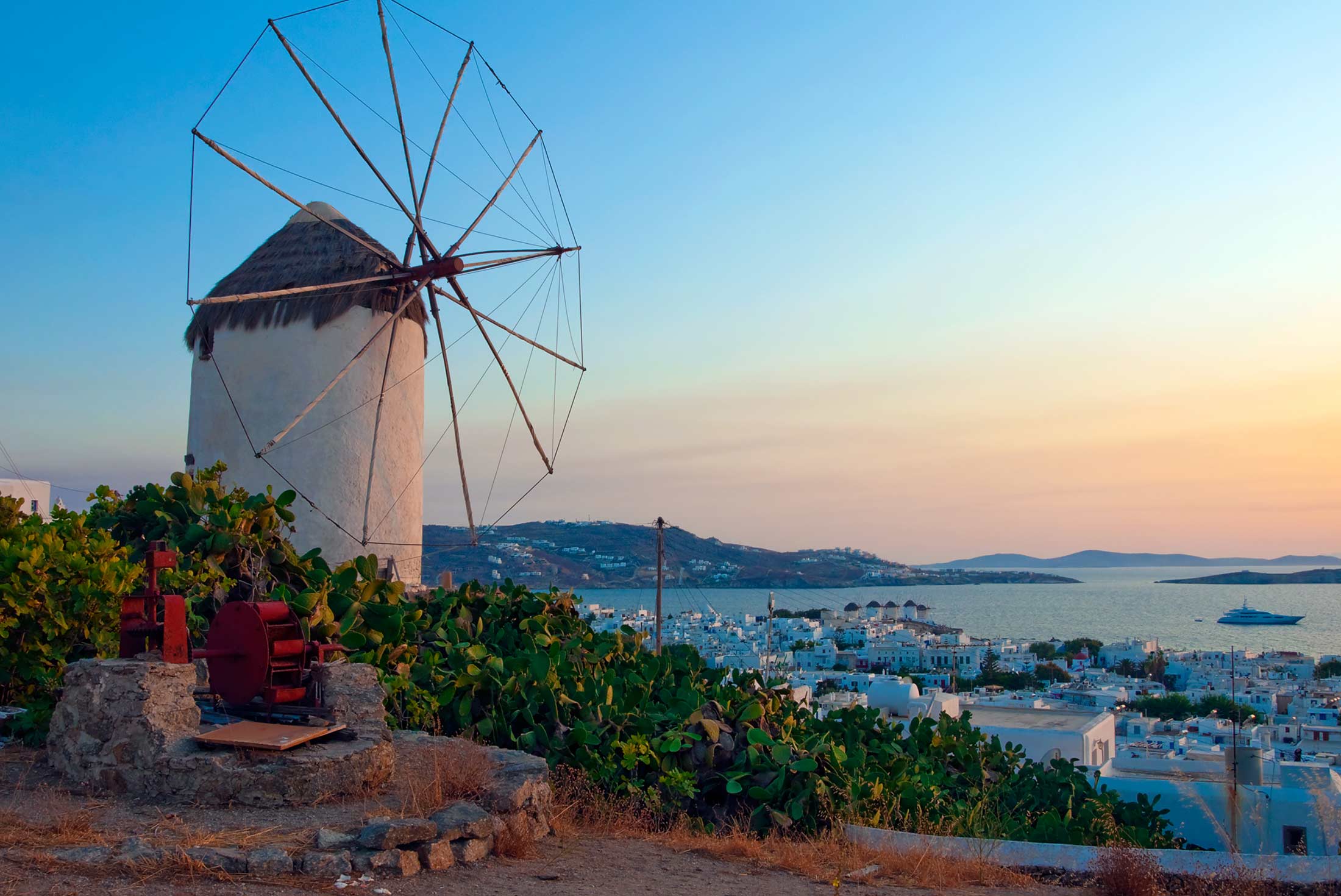 Embarkation in Athens to Kea

Embarkation will take place between 2 and 3 PM. Enjoy a welcome drink and meet your crew and fellow passengers before we set sail for Kea. Time at leisure to explore Kea's tiny port after dinner. We will depart there in the early hours for Delos. Overnight at sea

Take an optional morning tour to the archaeological site of Delos, antiquity's most sacred island. In antiquity, Delos was considered to be the spiritual and commercial centre of the Aegean. After a short tender ride disembark on the island and gather for an introduction before proceeding with your lecturer guide on a unique walk through the original streets of the site’s best preserved quarters. There you will see Hellenistic houses with beautiful mosaics in amazingly good condition, further along you will come to the Sanctuary, where you can see the ruins of a temple dedicated to Apollo – Delos being Apollo’s mythological birthplace. While over the Sacred Way you will see the famous five 7th century B.C. marble lions, guardians of the Sacred Lake. On to the Theatre and the Roman quarter, where you will find ancient statues dedicated to Dionysus and optionally visit the museum with its interesting exhibits. On to the port of Mykonos, with a swim stop on the way. A free afternoon and evening to enjoy the island's cosmopolitan lifestyle. Overnight in Mykonos.

We will arrive around noon in Santorini (anchorage at Fira). Experience the stunning natural drama of the volcanic caldera. Our optional tour will have you disembark by tender and board the cable car to reach the island’s capital Fira for a guided walk through the narrow pedestrian streets. Board the bus for a pleasant drive through the countryside passing the village of Pyrgos to the famous archaeological site of Akrotiri. If Santorini is known as the Greek Pompeii it is because of ancient Akrotiri. Excavations uncovered an ancient town frozen in time by ash from an eruption some 3.600 years ago. Remains of sophisticated buildings with great frescoes and other constructions are evidence of an elaborate lifestyle. Continue by bus to the northern coast admiring views of land, sea and skies to reach Oia, the most picturesque village of Santorini with its magical views over the Caldera. Our local guide will take you to the most photographed blue domes, to insight spots and will give you hints for your time at leisure. A short drive will bring you back to Fira. After reboarding, we sail overnight to Crete.

We arrive in the morning at Crete's famous and lively port or Rethymnon. Take an optional tour to the ancient city of Knossos near Heraklion. After about an hour’s drive eastwards along the coast through areas where Cretan wines grow we arrive at the Prehistoric (2000BC) Minoan Palace of Knossos. Located in a uniquely quaint scenery, the palace is a monumental symbol of Minoan Civilization due to its impressive size and construction and has been excavated and partially restored in the early 20th century by the great English archaeologist Sir Arthur Evans. Was it the palace of mythical King Minos bearing the labyrinth , where the fearsome Minotaur was said to have lurked? After our detailed visit we will proceed by bus to Heraklion to sample healthy local delicacies and have some free time before returning to Rethymnon. After reboarding, we will have a late departure for Kythira. Overnight at sea.

We stop enroute to Kythira for a late morning swim stop. Kythira, a less known island gem, is now fast becoming a favourite among visitors to Greece. We have the evening at leisure to visit the picturesque main town of Chora and experience the subdued charms of this peaceful island. Overnight in Kythira.

We depart early to sail to Monemvassia. Discover a remarkable medieval fortified town, with time at leisure to explore the uniquely preserved Byzantine and Venetian architecture and experience the beauty of the natural setting. Depart for Nafplion in the early afternoon, with a swim stop on the way. Evening arrival at Nafplion. The old quarter is charming, with narrow streets and characteristic period architecture. Also, impressive medieval fortifications can be seen in the port and crowning the hills above. Overnight in Nafplion.

Today, take an optional tour to Mycenae. A short drive through the fertile countryside of Argolis takes us to the ancient city of Mycenae, home to the kingdom of mythical Agamemnon. The importance of the city, which Homer calls “rich in gold” begins in 1650 B.C and ceases around 1100 B.C with the fall of the civilization to which it gives name. Visit the remains of the glorious city including the Lion’s Gate, the Palace and the tomb of Agamemnon. Mycenae in legend was the royal seat of the ill-fated House of Atreus, and from Mycenae Agamemnon, “king of men”, went off as the leader of the Achaean expedition to war against Troy. Early afternoon departure for the islands of Hydra. Time at leisure to explore this picturesque port town. Continue on to Marina Zea in Athens, arriving about midnight.

Disembarkation will take place after breakfast this morning. Make your way to the airport for your onward travels or stay on in Athens and soak up the ancient atmosphere of the city. 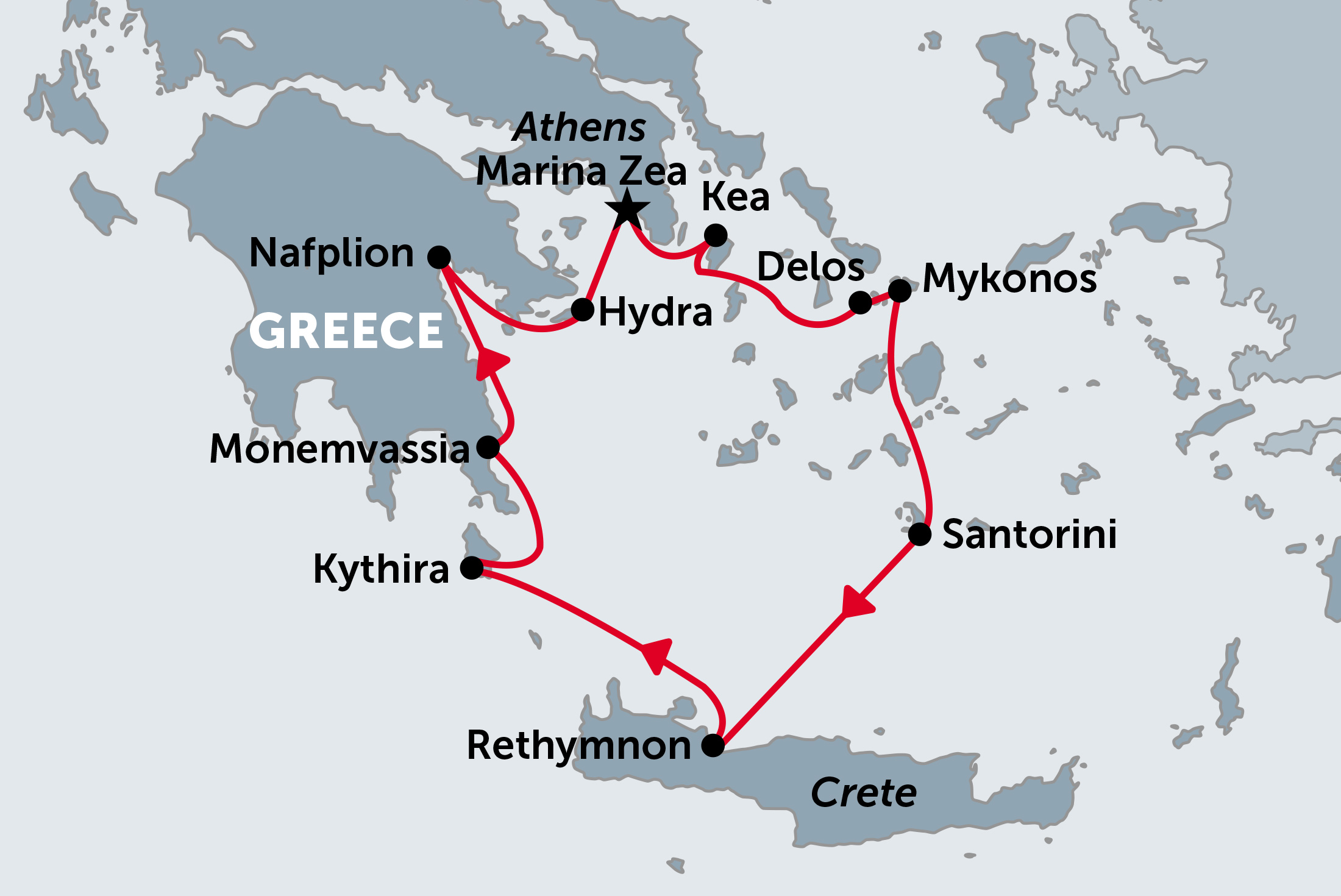