Follow in the footsteps of past explorers and cruise the marvellous Galapagos on board your comfortable vessel, the M/Y Grand Queen Beatriz.. Explore the central islands from your upper decks, on foot and perhaps in the water on a snorkelling experience, keeping your eyes peeled for the next wildlife sighting.. Have the chance to learn about the lives and conservation efforts of the giant tortoise on a group excursion to the Charles Darwin Research Station.. Galapagos penguins, land and marine iguanas, Sally Lightfoot crabs, pintail ducks, sea lions – you’ll be spotting this and so much more on your cruising expeditions.

Take a seven-day exploration deep in the Galapagos to a land of untouched islands and incredible wildlife. Flying from Quito, find yourself in a totally different world as you board the mighty M/Y Grand Queen Beatriz and follow in the footsteps of past explorers, cruising to the central islands of Isla Santa Cruz, North Seymour, Baltra and Santiago. See Tortuga Negra, Sombrero Chino and Cerro Dragon teeming with wildlife, and understand the conservation efforts of the giant tortoise at the Charles Darwin Research Station. With an expert licensed Galapagos guide joining you for the whole adventure, journey to the Galapagos Islands for a wildlife adventure like no other. 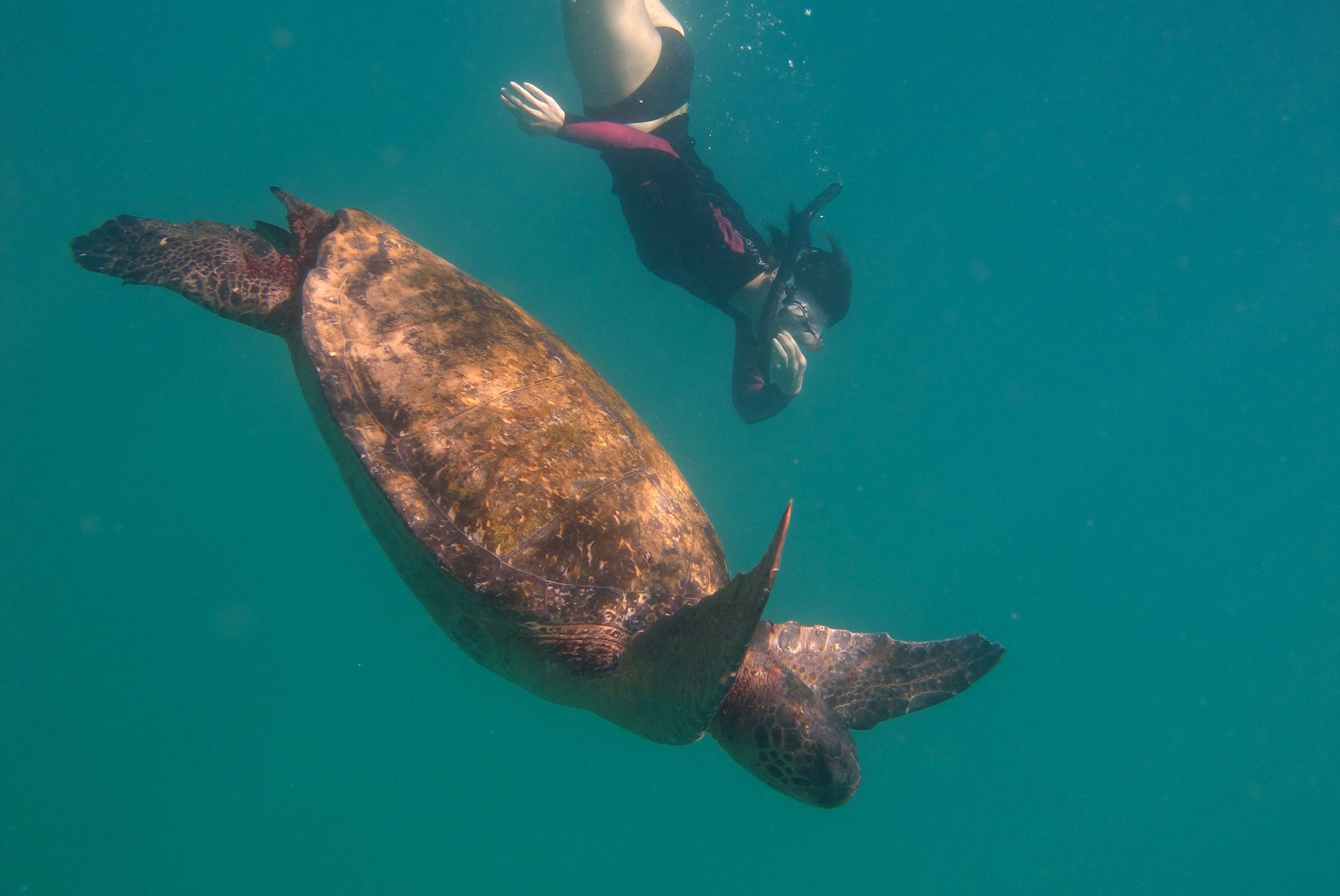 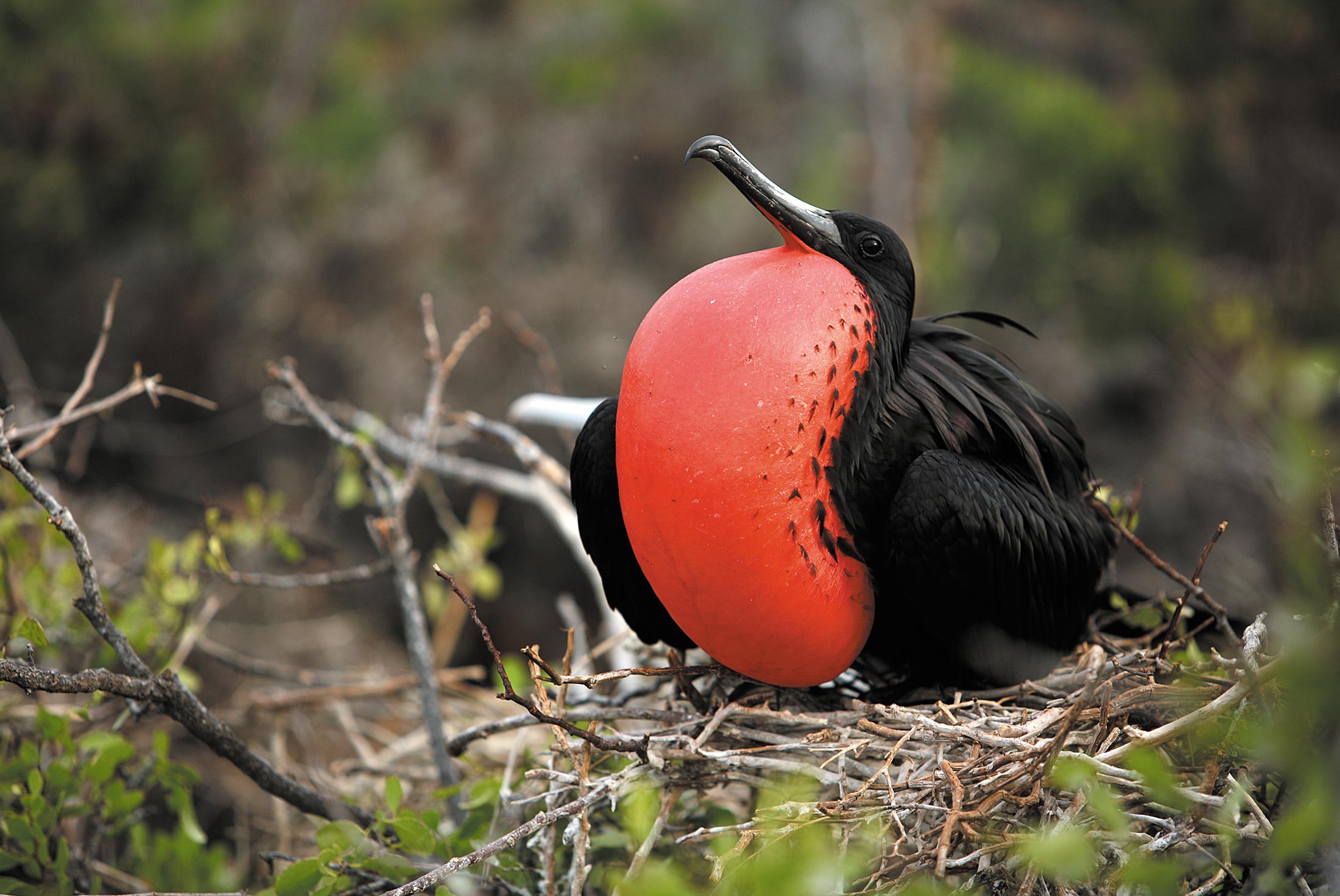 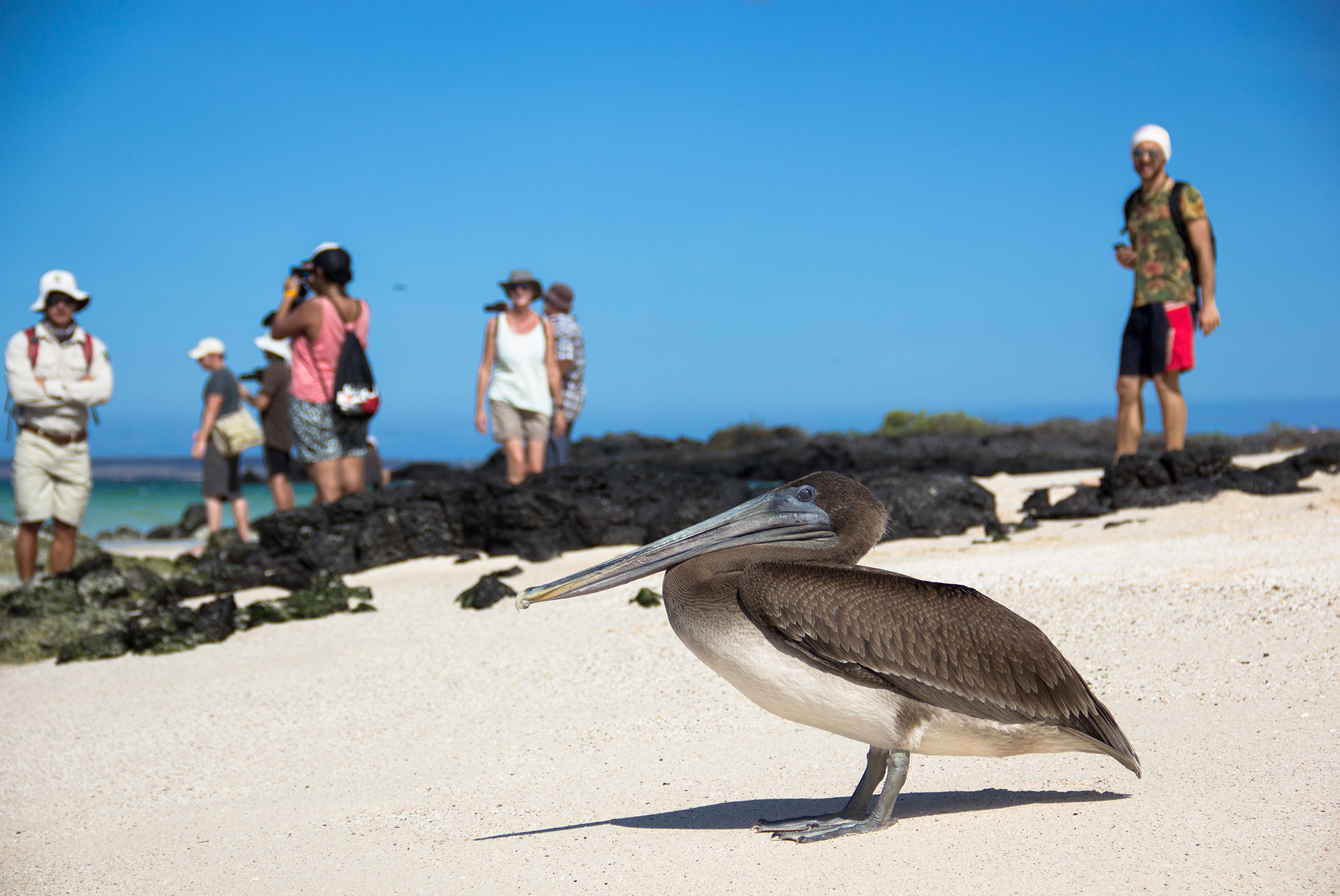 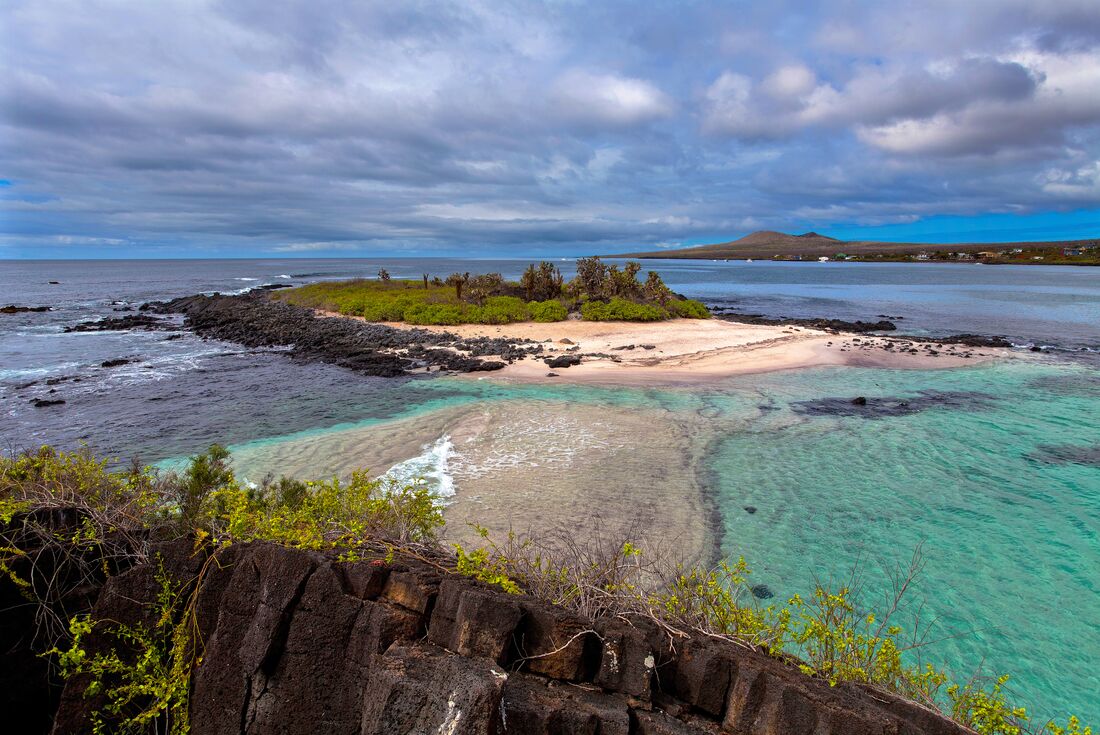 On arrival at Quito's Mariscal Sucre International Airport you will be met and transferred to your hotel. The remainder of the day will be at your leisure. A welcome meeting will be held in the evening at either 5 pm or 6 pm when you meet others travelling with you on your cruise to the Galapagos Islands. As today is an arrival day, you can arrive at any time as there are no activities planned until this important meeting. Quito sits at high altitude under the towering Pichincha volcano. It is a beautiful city, arguably one of the most beautiful in South America. The city stretches along the valley and is surrounded by the Andes. The Old Town of Quito is awash with history, with more than 30 churches to explore, and a number of fascinating museums. La Compania de Jesus is considered to be the most beautiful and ornate churches in the Americas. The city's oldest street, Calle La Ronda, is well worth exploring.

This morning, transfer to the airport for your flight to the Galapagos Islands. Please note the pick-up time will usually be as early as 4.30 am, as the airport is a 1-hour drive away and you must allow for delays and check-in times. Your tour leader will confirm this time with you at the welcome meeting. A boxed breakfast will be provided. The flight to the Galapagos will make one stop in Guayaquil to pick up other passengers. (Total flight time is about 3.5 hours). On arrival in the Galapagos, you will be met in the arrival hall of the airport (look out for 'Grand Queen Beatriz' signs) by a transfer guide and transferred to our motor yacht – the M/Y Grand Queen Beatriz – anchored on the other side of Isla Santa Cruz. A transfer guide will take you on an airport public bus for a 5-minute drive to where you board a public ferry across the Itabaca Channel. The ferry crossing takes only 7 minutes. Once you reach Santa Cruz Island, a private bus you board a private bus for a 45-minute drive to Puerto Ayora, the main port of the island. Here, there will be two dinghies to transport you and your fellow travellers to the M/Y Grand Queen Beatriz. Once on board, cabins will be assigned and there will be a welcome briefing and safety drill. You will then get to meet our crew members and get to know your naturalist guide while enjoying a delicious lunch. Your first stop in the afternoon is Santa Cruz, the second largest island in the Galapagos. The small town of Puerto Ayora is the economic centre of the archipelago, and home to the Charles Darwin Research Station. As well as undertaking vital conservation work, the station also makes for interesting exploration and offers the best opportunities for close encounters with giant tortoises. You will also observe baby tortoises and land iguanas.

This morning, take an excursion to North Seymour which is one of the most visited islands in the Galapagos. The trail on North Seymour crosses inland through the island and then explores the rocky coast. Along the way the trail passes colonies of blue-footed boobies and frigatebirds. The magnificent frigatebird – a large black bird with a long wingspan and a hooked beak – is extremely fast and has excellent vision. During mating season the males throw back their heads, inflate the pouch (sometimes to the size of a soccer ball), and shake trying to capture the attention of female frigates. Boobies and frigates have an interesting relationship. Sharing the same nesting area on North Seymour, blue-footed boobies nest on the ground making their nests from the twigs of the palo santos trees, while the frigatebirds nests just above them in the saltbushes. Your walk is followed by snorkelling where you will find a great variety of fish and possibly white-tipped reef sharks, rays and sea lions. After lunch, visit the small sandy island of Mosquera, a relaxing, picturesque stop situated between Isla Baltra and North Seymour. Along the rocks and in the tide pool, Sally Lightfoot crabs (red lava crabs) scamper back and forth, skipping across small pools of water in search of food. These crabs with their bright red shell tops and blue under shells are stunning against the black lava. The island also has a very large colony of sea lions as well as a sizeable resident brown pelican population. Depending on the tides and visibility, you may have a chance to go snorkelling here.

Today, take a morning excursion on a Zodiac to Caleta Tortuga Negra (Black Turtle Cove) – a red mangrove wetland on the north shore of Isla Santa Cruz. You will paddle among the cove’s peaceful waters, for your first taste of the underwater riches of this region – it’s a wonderful place to see green turtle and is a nursery for golden cow-nose rays, eagle rays and Galapagos sharks. There is also abundant birdlife, such as the yellow warbler and lava heron. This is also a breeding area for turtles, so it is not uncommon to see them mating. In the afternoon, cruise over for a walk on Cerro Dragon (Dragon Hill) this afternoon – one of the best places to see land iguanas in the islands. From a dry landing, walk to a brackish lagoon frequented by lagoon birds including stilts, pintail ducks, sandpipers, sanderlings and occasionally flamingos. Further inland, the trail offers a beautiful view of the bay and the western area of the archipelago. This area is a nesting site for land iguanas, which is constantly monitored and assisted by the Charles Darwin Research Station. The arid-zone vegetation makes for a rewarding location for birdwatching with Darwin's finches, Galapagos mockingbirds, the endemic Galapagos flycatcher and yellow warblers all regulars here. The path can be challenging but you will be well-rewarded with a spectacular view of the bay!

Sombrero Chino is a small islet located near the south-east coast of Santiago. It's geologically fascinating, with many lava tubes leading from the cone to the coast. Approach Sombrero Chino via a beautiful crescent-shaped, sandy beach that is home to sea lions and Sally Lightfoot crabs. Opposite Sombrero Chino, on the rocky shoreline of nearby Santiago, Galapagos penguins are often seen. Follow a trail that circles the cove and passes through a sea lion colony and innumerable marine iguanas. The cove also offers some great snorkelling opportunities, hopefully with penguins and sharks. Isla Rabida is a tiny island sitting roughly five kilometres south of Santiago and is one of the most striking of the archipelago. Introduced species were eradicated in 1971, meaning that the indigenous wildlife has now been returned to a state of splendid isolation. Additionally, volcanic activity here has produced vivid, fantastical colours, not least the beaches of red sand and cliffs of scarlet. From the shore, the trail leads through to what is one of the finest lagoons in the Galapagos for viewing flamingos. Rabida is also a wonderful place to spot nesting pelicans. Elsewhere, pintail ducks, marine iguanas and sea lions are all present. There is an opportunity for snorkelling in a place where sea stars, damsels, gobies and surgeon fish are numerous.

As flights to the mainland from Galapagos depart mid morning, it is an early start for your last morning on the islands. Depending on the time of the flight, our time spent on this final excursion could be limited. Today you will take an early morning excursion to Las Bachas, which was so named after the barges abandoned by the American Navy here in the 1940s. The sandy, white beaches of Las Bachas on the north shore of Santa Cruz are a nesting site for the Pacific green turtle, and marine iguanas are also commonly seen. The sand here is particularly white and soft as it is made of decomposed coral. The rocks provide great snorkelling and are the perfect habitat for the Sally Lightfoot crabs, which are plentiful on the island. A saltwater lagoon near the beach is home to flamingo and whimbrel, and look out too for great blue herons. This is your final excursion before you return to the airport in Isla Baltra for your flight back to Quito. The flight will stopover in Guayaquil to drop off/pick up new passengers. Upon arrival in Quito Airport (approximately 4 pm) you will be transferred back to your hotel for an overnight stay.

Your Galapagos adventure will come to an end today after breakfast. There are no activities planned for the final day so you are able to depart the accommodation at any time. There are many fascinating things to do in and around Quito, so please speak to our customer service representative about any optional activities that might be of interest. They can also assist you in booking a departure transfer to the airport. 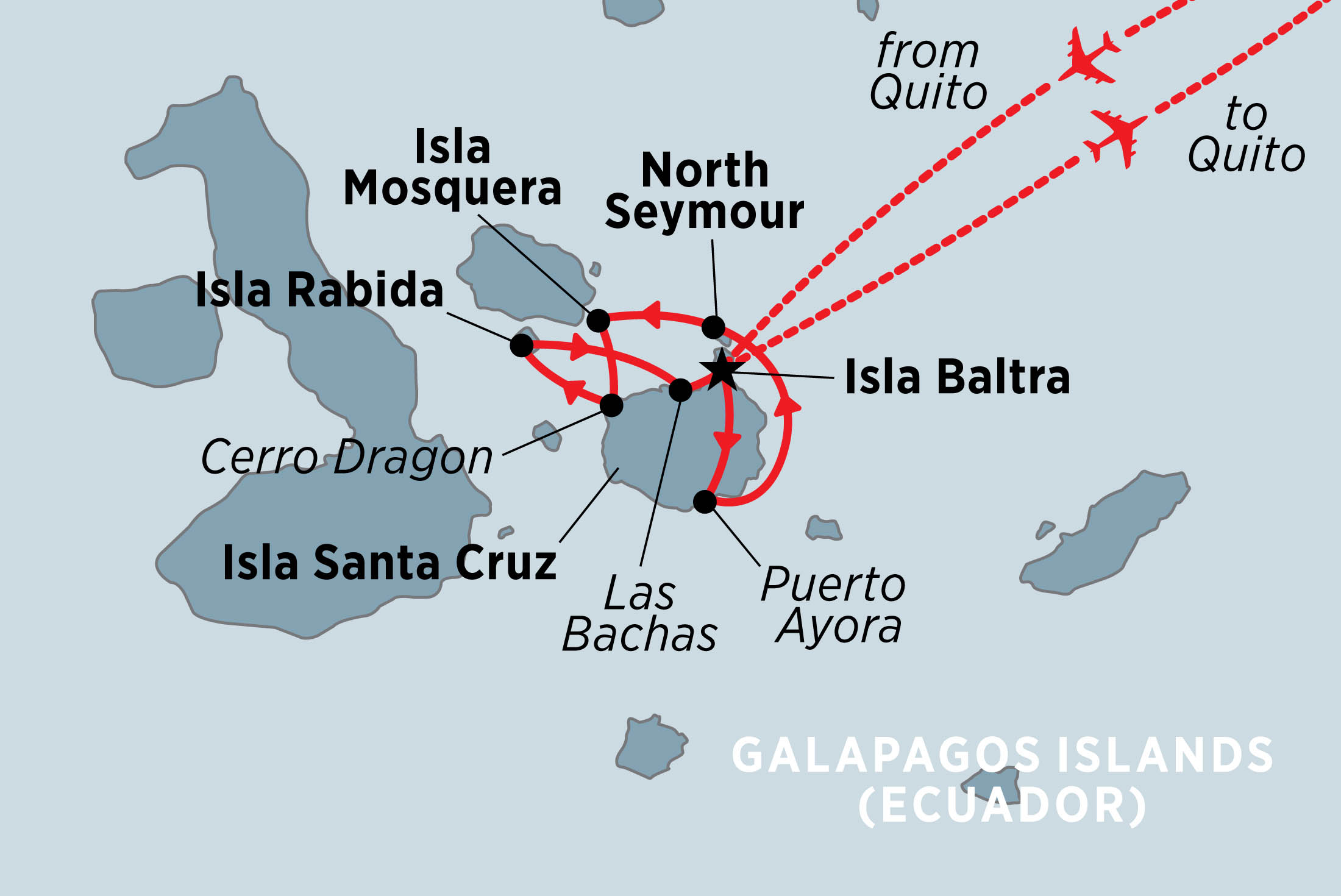