Hike, snorkel, sleep, repeat – this isn’t your average cruise. Get active in the rugged and isolated northern Galapagos Islands.. From sunbathing sea lions to colourful crabs, this trip is bound to feature encounters with crazy critters of all shapes and sizes.. Wander along the red-sand shore of Isla Rabida, then head inland in search of the flamingos and other water birds.. This 7-day tour is a short and sweet introduction to the famed archipelago, the perfect addition to any South American adventure.

With almost 1000 kilometres of water lying between them and the South American mainland, the islands of the Galapagos were able to evolve largely unfettered by the presence of humanity. The archipelago has captivated explorers for years, and it remains almost as rugged, as remote and as enchanting as ever. Encounter sassy sea lions, hike over hardened lava, and cool off with multiple snorkels in aquamarine waters. This cruise is perfect for those who like their adventures active and action-packed. 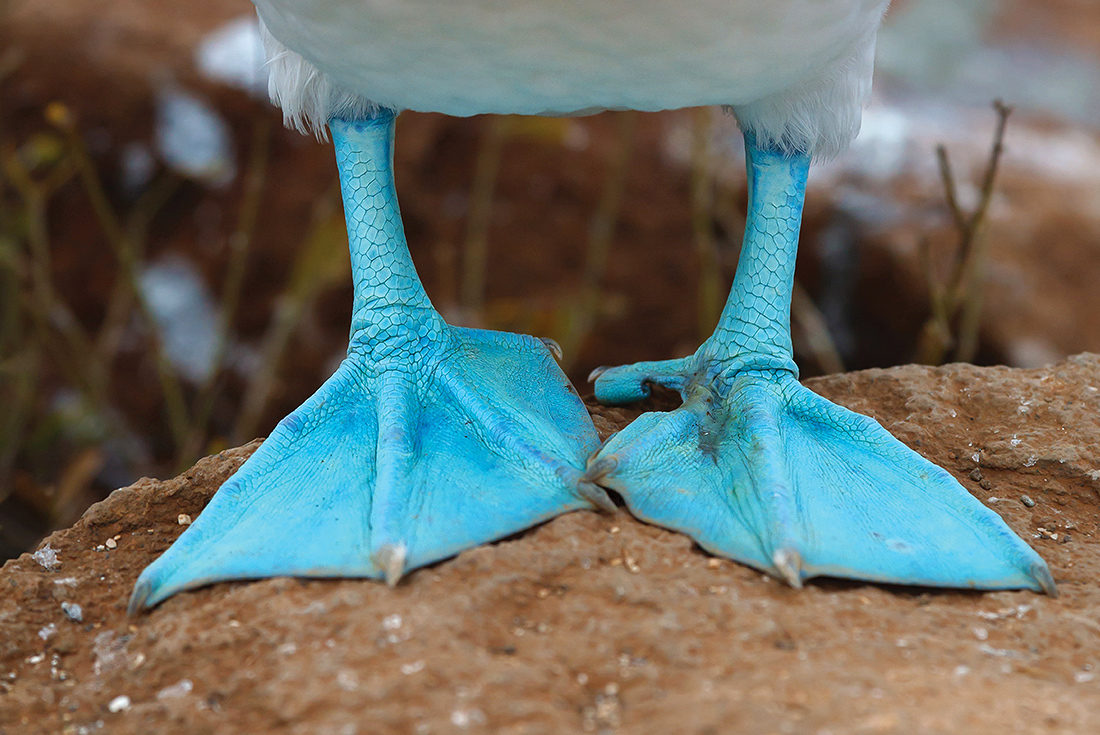 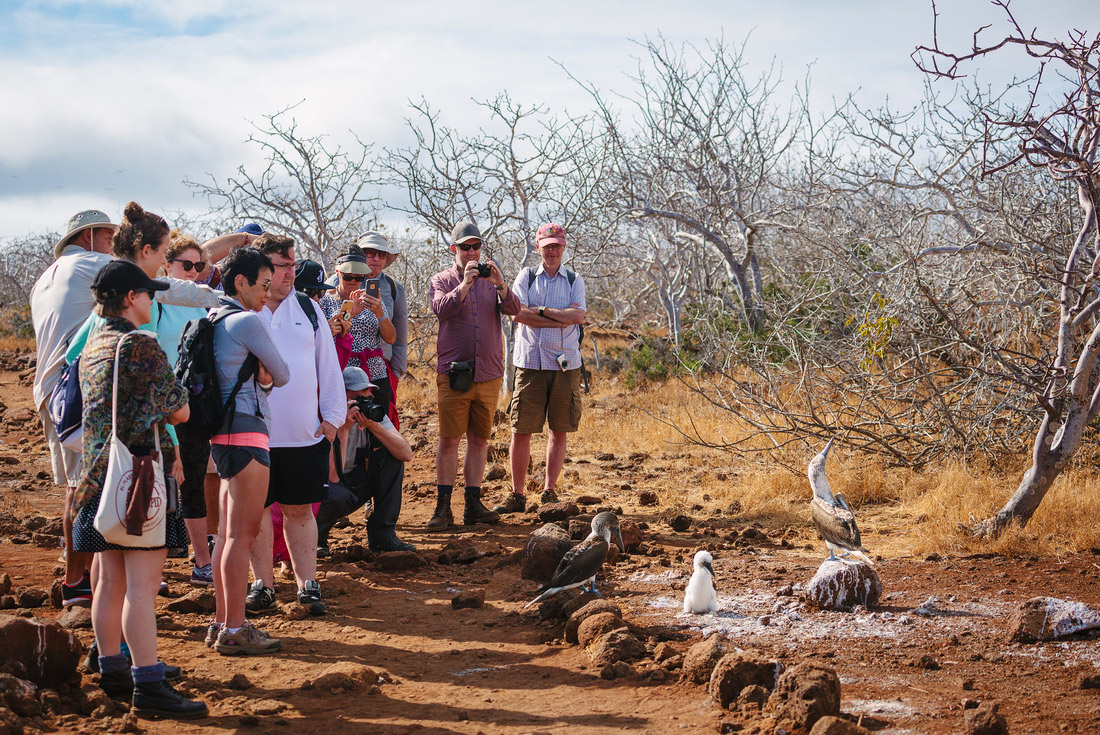 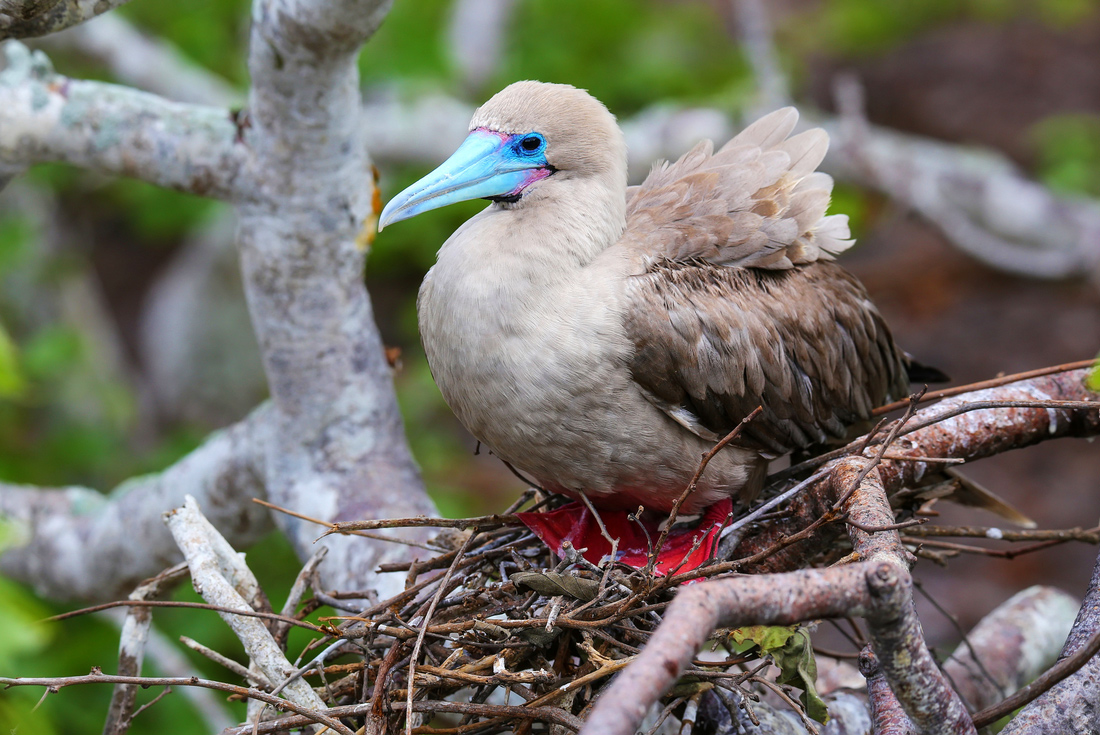 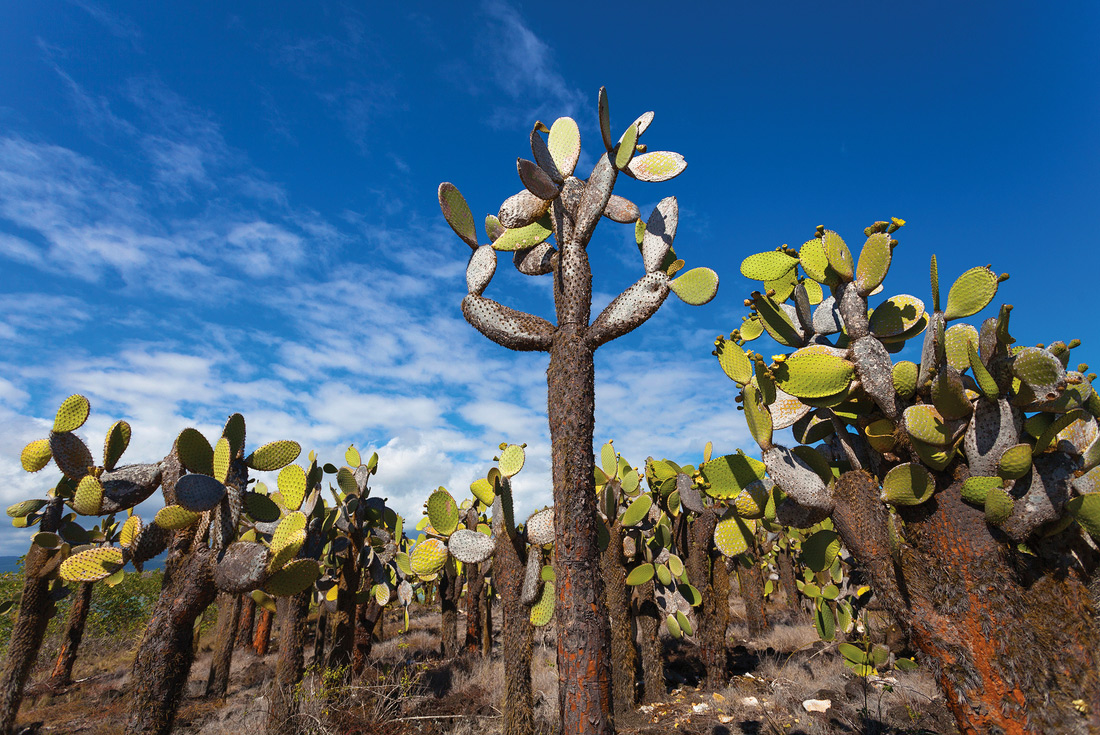 The adventure gets underway in Quito, Ecuador’s sprawling but refined capital city. A welcome meeting will be held this evening at either 5 pm or 6 pm so that you can meet your fellow travellers, but aside from that you are free to check out the city on your own today. If you arrive with time to spare, perhaps head to Quito’s Old Town and pick one (or more) of the 30 churches to explore.

Rise and shine! An early start is necessary this morning to make it to the Galapagos with time to play today. This could mean leaving as early as 4.30 am, and an Intrepid representative will confirm the exact departure time during the welcome meeting on day 1. Transfer to Mariscal Sucre International Airport (aka Quito Airport), enjoying a boxed breakfast en route. On arrival in the Galapagos, meet your local naturalist guide in the arrival hall and transfer to Le Grande Daphne. Climb aboard and settle into your assigned cabin, meet the crew and listen to a safety drill. With the formalities out of the way, sit down to lunch and get to know your shipmates a little better. The first stop today is the San Cristobal Interpretation Center. The centre brings the history and geography of the archipelago to life, from its volcanic origins to the present day. Get a complete overview of the Galapagos, the perfect way to start your adventure. This afternoon, there will be an opportunity to travel to the highlands in order to view Giant Tortoises in a protected area. Please note that this will be your only opportunity on this trip to see these magnificent creatures, but the price is not included in your trip price. This optional excursion will take approximately 2 hours with a shared cost around US 120, though individual cost will vary depending on how many of your group choose to partake.

Take a walk on Isla Santa Fe, home to a collection of the most spectacular wildlife in the Galapagos. You can expect to see sea lions, Galapagos hawks, land iguanas, a variety of finches, Galapagos mockingbirds, marine turtles, frigatebirds, Galapagos doves and lava lizards. Phew. The approximately 1.5-hour hike takes you along the coast and through a forest of opuntia (prickly pear cacti). The trail can be a little rocky, so mind your step and wear solid walking shoes. Afterwards, continue to Isla Plaza Sur, a small, picturesque island. Take a walk (approximately 1.5 hours), getting close to sea lions and passing one of the Galapagos’ largest land iguana populations which rest among cacti. The southern cliffs of Plaza Sur are great for spotting tropicbirds and swallow-tailed gulls, as well as ‘the Gentlemen’s Club’ – a gathering of male sea lions. Today there may be an extra stop along the way to Plaza Sur to restock the provisions for the boat. Later tonight, set sail for Isla Genovesa. Estimated travel time/distance: Isla San Cristobal to Isla Santa Fe: 3.5 hours (26 nautical miles) Isla Santa Fe to Isla Plaza Sur: 2 hours (16 nautical miles) Isla Plaza Sur to Bahia Darwin (Isla Genovesa): 7.5 hours (59 nautical miles)

After an overnight sail, reach Isla Genovesa, the archipelago's north-eastern outpost. It’s undeniably worth the voyage. Dolphins are often spotted in the waters here, so keep your eyes peeled. These varied landscapes are a twitcher's paradise, with all three kinds of boobies, including the rare red-footed booby, making their home here. Next up is Bahia Darwin (Darwin Beach), another superb site with large breeding colonies of seabirds and frigates and other birds such as lava herons, swallow-tailed gulls, mockingbirds and, hopefully, vampire finches. Enjoy a moderate walk (approximately 2.5 hours) that passes tide pools, sea lions and diamond stingrays. This walk involves sand and some rocky sections. The steep Prince Philip's Steps lead you to the heart of the seabird rookeries, with birds overhead and nesting among the cliffs. Look out for storm petrels on the island’s rocky plains; Genovesa is the only place in the world where these birds can be seen flying during the day. Afterwards, perhaps cool off with a snorkel. The island's magnificent marine life makes for spectacular snorkelling – you might encounter manta rays, sharks, turtles and moray eels, plus many species of fish. Later tonight, depart Isla Genovesa for Isla Santiago. Estimated travel time/distance: Prince Philip's Steps to Bahia Sullivan (Isla Santiago): 8 hours (48 miles)

On Santiago Island's eastern coast sits Bahia Sullivan, also known as James Island. Here you’ll take a walk along pahoehoe lava (approximately 1 hour), which was created by an eruption that occurred in 1897, and witness the plants that have grown on the site since that last eruption. With some luck you might see some marine iguanas, Sally Lightfoot crabs, sea lions, finches, turtles, sharks and penguins. During your walk, your guide will recount the geological history of the islands. Then it’s on to Isla Rabida, known for its gorgeous red sandy beach (coloured that way due to rusting iron). This is one of the most striking islands of the archipelago. Starting at the shore, follow a walking trail (approximately 45 minutes) through to what is one of the finest lagoons in the Galapagos for viewing flamingos. Rabida is also a wonderful place to spot nesting pelicans. Elsewhere, pintail ducks, marine iguanas and sea lions are present. Here you will find Opuntia cactus forest, which suggests previous existence of land iguanas and possibly Galapagos hawks, mockingbirds, doves, finches and lava lizards. You’ll have the chance to snorkel among sea stars, damsels, gobies and surgeon fish, and take a panga ride in search of wildlife. Estimated travel time/distance: Sullivan Bay to Isla Rabida: 2 hours (16 nautical miles) Isla Rabida to Black Turtle Cove (Isla Santa Cruz) 2 hours (16 nautical miles)

Take a walk along pahoehoe lava on Bahia Sullivan (approximately 1 hour), which was created by an eruption that occurred in 1897. With some luck you might see some marine iguanas, Sally Lightfoot crabs, sea lions, finches, turtles, sharks and penguins. Then it’s on to Isla Rabida, known for its gorgeous red sandy beach (coloured that way due to rusting iron). This is one of the most striking islands of the archipelago. Starting at the shore, follow a walking trail (approximately 45 minutes) through to what is one of the finest lagoons in the Galapagos for viewing flamingos. Rabida is also a wonderful place to spot nesting pelicans. You’ll have the chance to snorkel among sea stars, damsels, gobbies and surgeon fish, and take a Zodiac ride in search of wildlife. Estimated travel time/distance: Bahia Sullivan to Isla Rabida: 2 hours (16 nautical miles) Isla Rabida to Black Turtle Cove (Isla Santa Cruz) 2 hours (16 nautical miles)

There are no activities planned for the final day after breakfast. There are many fascinating things to do in and around Quito, so consider staying for a few days to explore. If you are planning to spend more time in this charming city, consider booking an Urban Adventure. These day tours are the perfect crash course in the city. Find out more at urbanadventures.com/destination/Quito-tours. 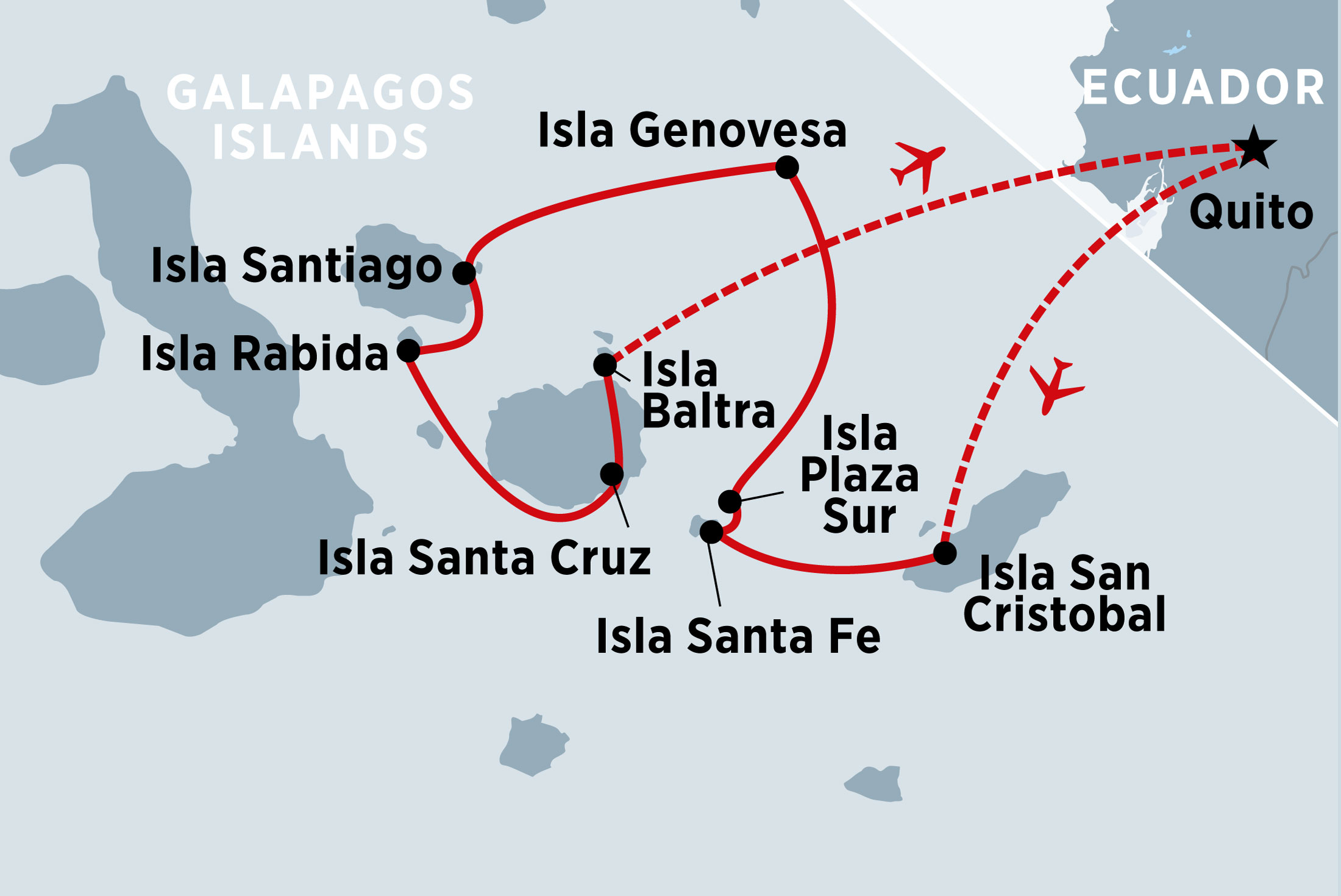