Visit the Saloum Delta, a UNESCO liste Biosphere reserve and important birding area. Visit Kunta Kinteh, the island named after the character in Roots and a UNESCO World Cultural Heritage Site. Observe chimpanzees from a motor pirogue on Baboon Island. Look out for dolphins in the Gambia River estuary

See a different side of West Africa on this spectacular adventure cruise from Senegal down into The Gambia. Explore the wild realm of the Saloum Delta, where marine turtles, crocodiles and manatees lurk. Sail to Banjul and to former St James Island to uncover the story of Kunta Kinteh. Head on up to Tendaba village, where wildlife-filled parks and wetlands are just a safari-truck or motor-pirogue ride away. Continue to Kuntaur for the chance to get up close to chimpanzees, experience lively local culture and music, visit the Wassu Stone Circles and observe local fishing-village life. Drop anchor in Banjul for a kora performance, before returning to Dakar via the dolphin-filled Gambia estuary and the Atlantic Ocean. Along the way, discover the unique traditions and lively rhythms that make West Africa such a fascinating cultural tapestry, with optional land excursions from your plush base, the Harmony G. 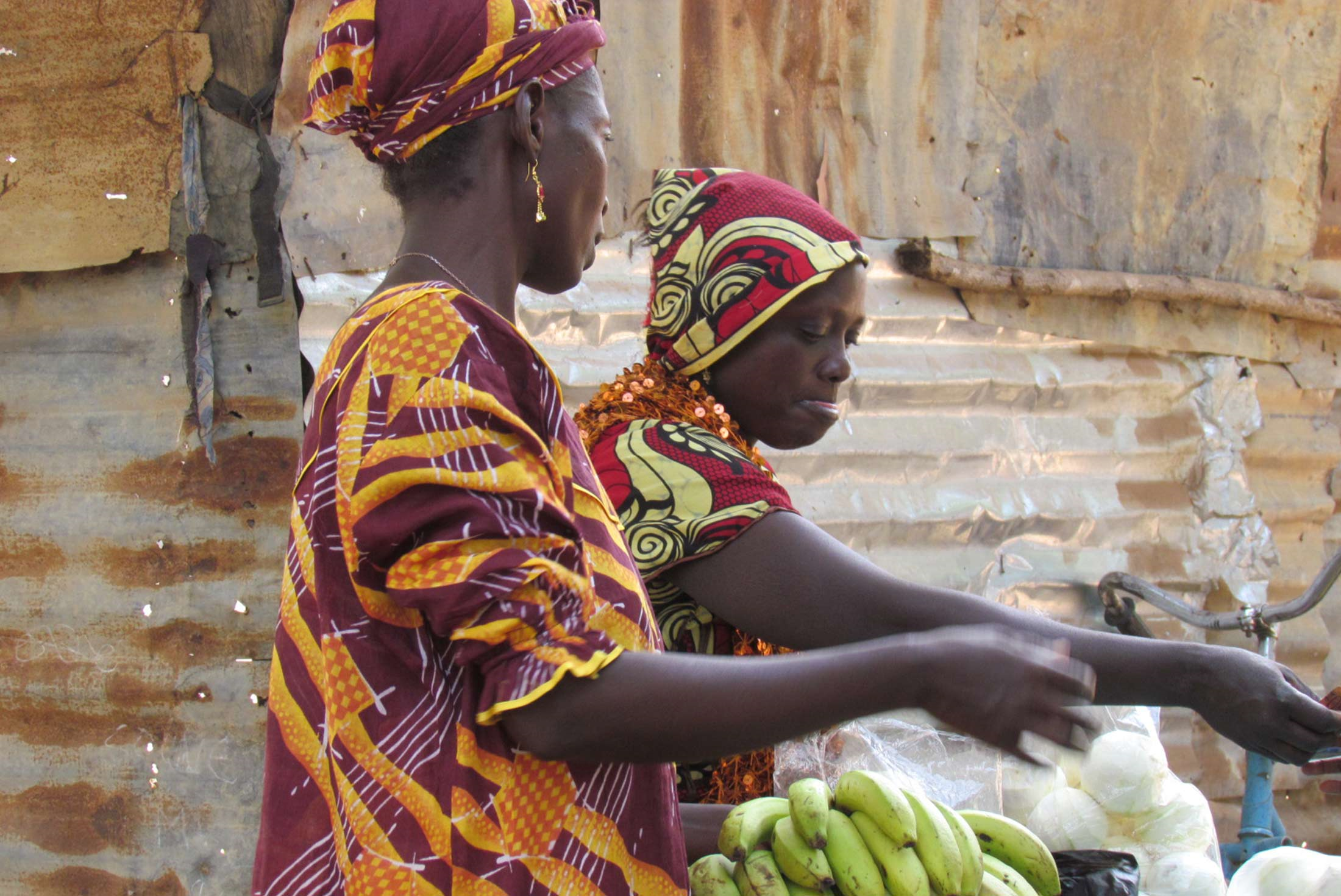 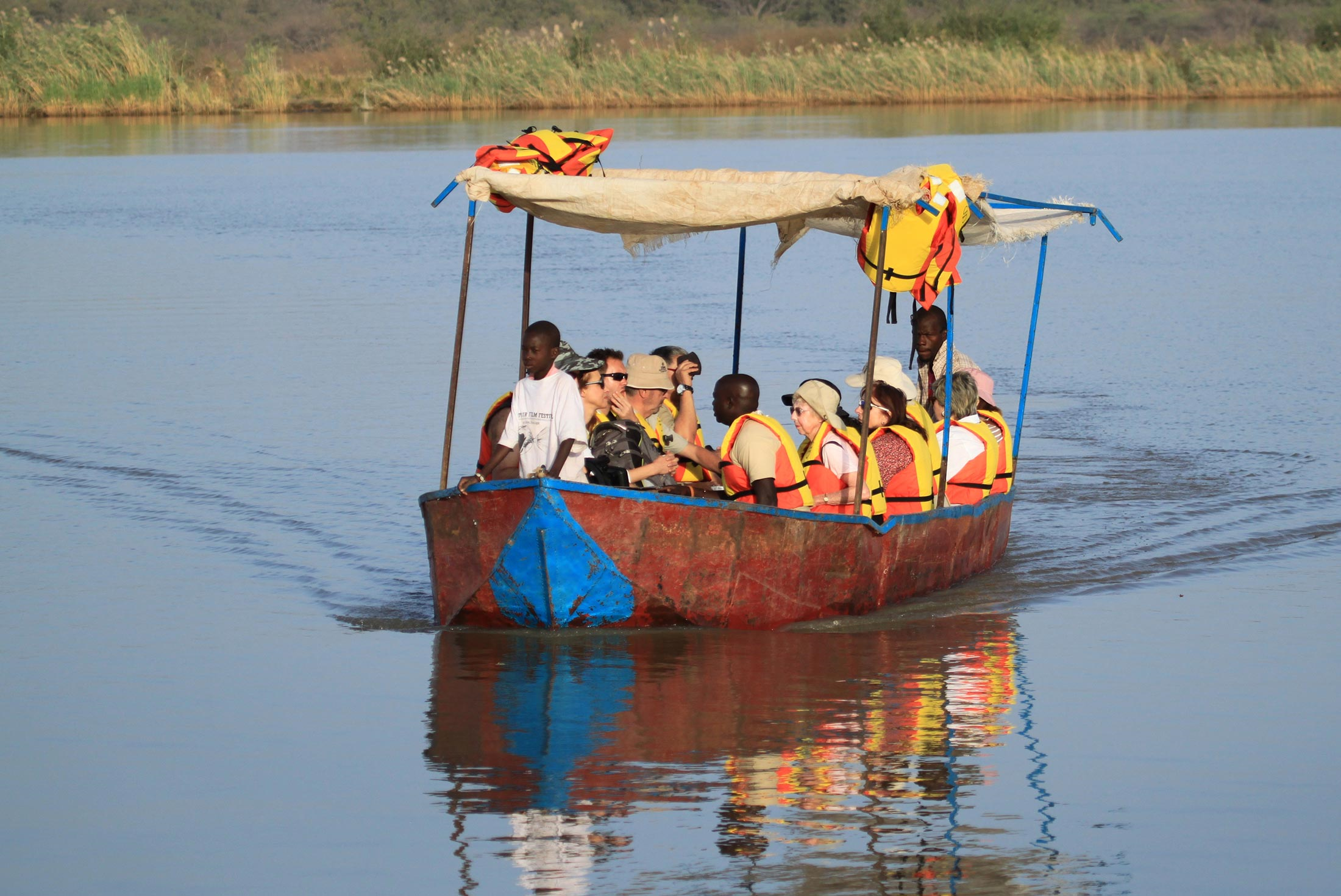 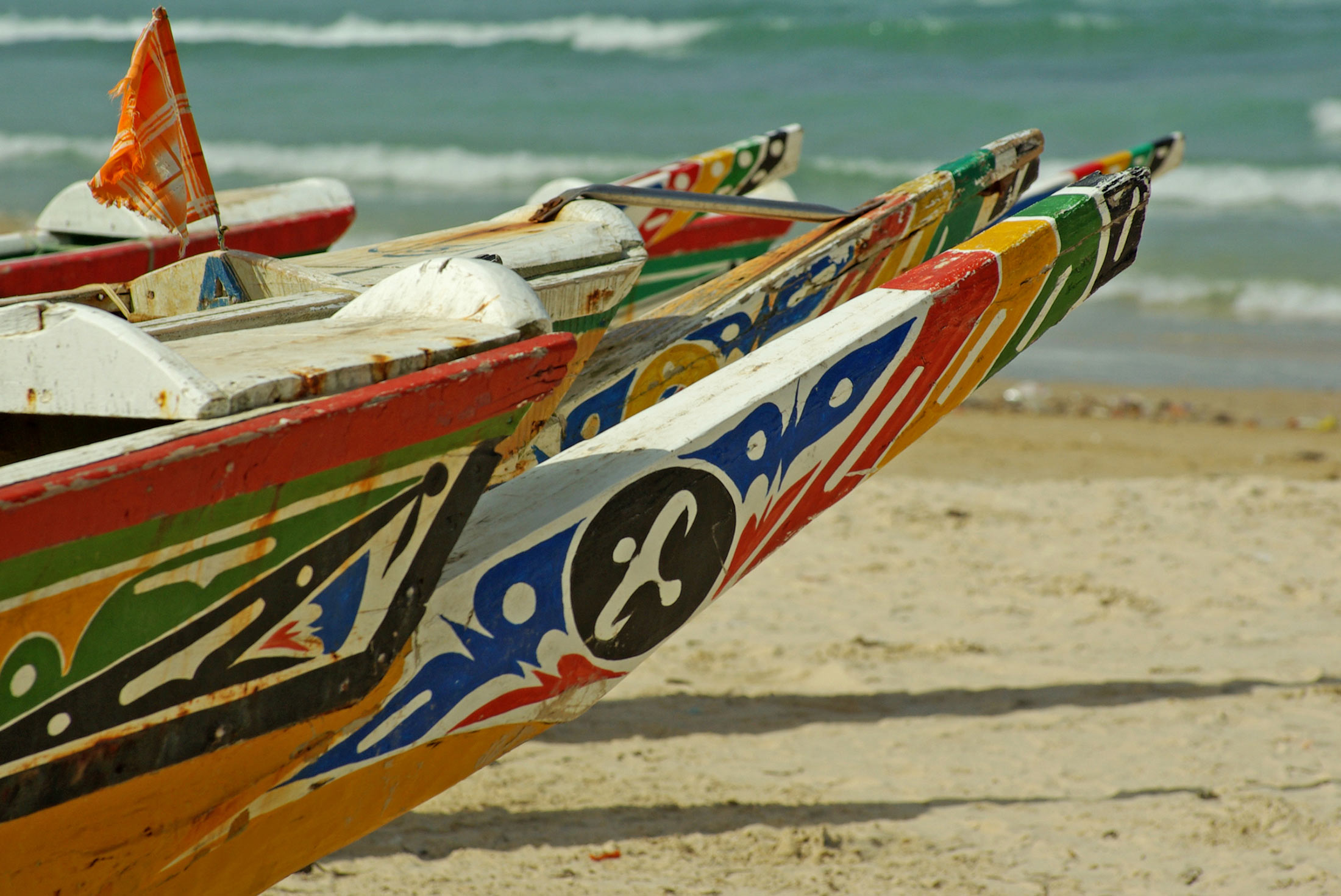 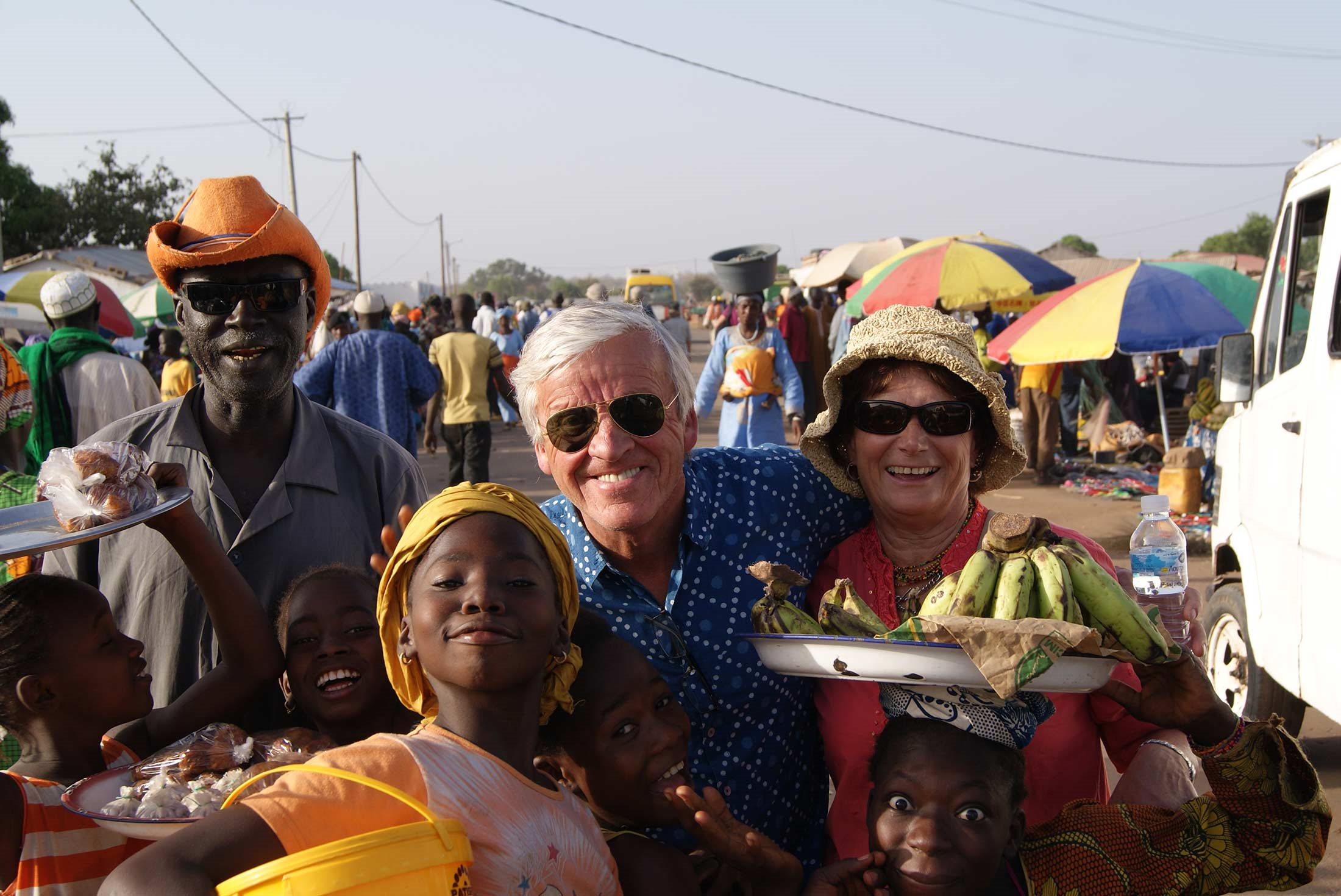 Board in Dakar, Senegal

Embarkation will take place between 2pm and 6pm this afternoon. Enjoy a welcome drink and meet your fellow passengers before dinner on board. After dinner, we set sail southward towards the Saloum River Delta. Overnight at sea.

Important Birding Area as designated by Birdlife International. This area is a natural habitat for many bird species along with marine turtles and dolphins, West African manatees and crocodiles. Our optional excursion starts at the fishing village of Djiffere, disembarkation takes place by local tenders, called motor pirogues. Then we board a bus and drive to the village of Joal. During the 1.5 hours journey you can enjoy spectacular panoramic views, watch local every-day-life and might observe various species of birds. Todays sights include, granary huts on stilts, sea-shell cemetery and village of Faiouth which is on a small island made out of sea shells. After lunch we take the same road back to Djifer, stop shortly at a giant Baobab tree and return to the ship by motor pirogues. In the afternoon, we leave Senegal and the Saloum Delta and sail south to Gambia to reach Banjul, the capital of Gambia and gateway to the 700-mile Gambia River. Stay overnight in Banjul.

The morning in Banjul there is an optional half day excursion to Bakau (with its crocodile 'kachikaly' and Botanic Garden) and a short Banjul Tour. After lunch, leave Banjul and sail upstream to Tendaba. Stay overnight at the dock in Tendaba.

From the ship we take motor pirogues in order to reach Tendaba, located on the South Bank in the Lower River Division, our starting point of our morning optional excursion. It is a small fishing village of mainly Muslim faith with approximately 600 inhabitants. From there we will walk through to Batelling, a small village at the entrance to Kiang West National Park. The area boasts of over 250 species of birds; many of which are difficult to observe anywhere else. Other residents include Guinea baboons, bushbuck, warthogs, Senegal bushbaby and marsh mongoose. After a refreshing stop in Batelling, we will board an open safari truck which brings us back to Tendaba. On the way we pass again local villages where you get an impression of local life in The Gambia. In the afternoon, we are picked-up from the ship by motor pirogues for another optional excursion to the Bao Bolong Wetland Reserve. This reserve, lying across from Kiang West National Park features six major bolongs (creeks) that provide great birding and boating opportunities. Numerous rare and migratory birds also reside here including the Pel’s fishing owl, African fin foot and brown-necked parrot. Spend the night docked in Tendaba.

Early morning we leave Tendaba and sail upstream on the Gambia River to reach Kuntaur. We arrive early afternoon in the bustling Gambian port town, the last inland stop along the river that is navigable for ocean-going ships. Later in the afternoon we board a large motor pirogue for a 3 hour optional excursion on The Gambia River. First we head to the southernmost tip of Baboon Island, one of the five islands of The Gambia National Park. There a local national park ranger will join us onboard to talk about the park and its fauna & flora. Then we turn, downstream to motor slowly back to Kuntaur following closely the shores of Baboon Island. This island is home of the Chimpanzee Rehabilitation Project. If we are lucky, we can closely observe the chimps from the water with minimal intrusion. There is also the possibility of seeing hippos, crocodiles, Red Colobus, Green Vervet monkeys and also The Gambia’s famous birdlife. We return to Kuntaur where we are met by the “Kankurang” and a local dance group on the pier. Believed to have spiritual powers the “Kankurang” dispenses justice and wards off evil spirits. Overnight docked in Kuntaur.

This morning, our optional excursion by bus takes us to the ferry station of Janjanbureh. There we board the local ferry for a short cruise over The Gambia River to Janjanbureh. We continue our excursion with a visit of one of the oldest towns of The Gambia, formerly called Georgetown. During the walk you get an impression of this laidback town and see the residence of the governor, the market and the Methodist church with its school. Afterwards we take the ferry back and re board the bus to reach Lamin Koto. Through the generosity of Variety Cruises and of many of its clients, a new school building is being built. Later in the morning we stop at the mysterious stone circles in Wassu, a megalithic site believed to be a burial ground thousands of years ago. You will visit the little museum of this archaeological site, a UNESCO World Cultural Heritage Site. In the afternoon, after lunch, we sail downstream to Kaur a small fishing village on the banks of the Gambia. You will have the opportunity to walk around this small community and see how Gambians live today. In the evening we leave Kaur and sail downstream towards Banjul. Enjoy a captains farewell dinner tonight.

This morning we anchor at St James Island in the middle of the Gambia River. The first settlers on the island arrived in 1651 and under the British rule it became an important slave trading post in The Gambia. In 1976 St James Island became famous due to the author Alex Haley and its bestseller book 'Roots' and the story of a slave, called Kunta Kinteh. The island was recently renamed Kunta Kinteh Island and is now a UNESCO World Cultural Heritage Site. We will have the option of taking a walking tour. After disembarking by local tenders your local guide will tell you more about the history of James Island and afterwards you will have some time to explore this island by yourself. After lunch, we leave "Kunta Kinteh" to reach Banjul around 4pm.  After formalities, later in the evening, we will sail out of the Gambia estuary into the Atlantic Ocean northwards to Dakar. Tonight is Gambian Night with Kora instrument Concert. Overnight at sea to Dakar.

Disembarkation will take place at about 9am today, after breakfast 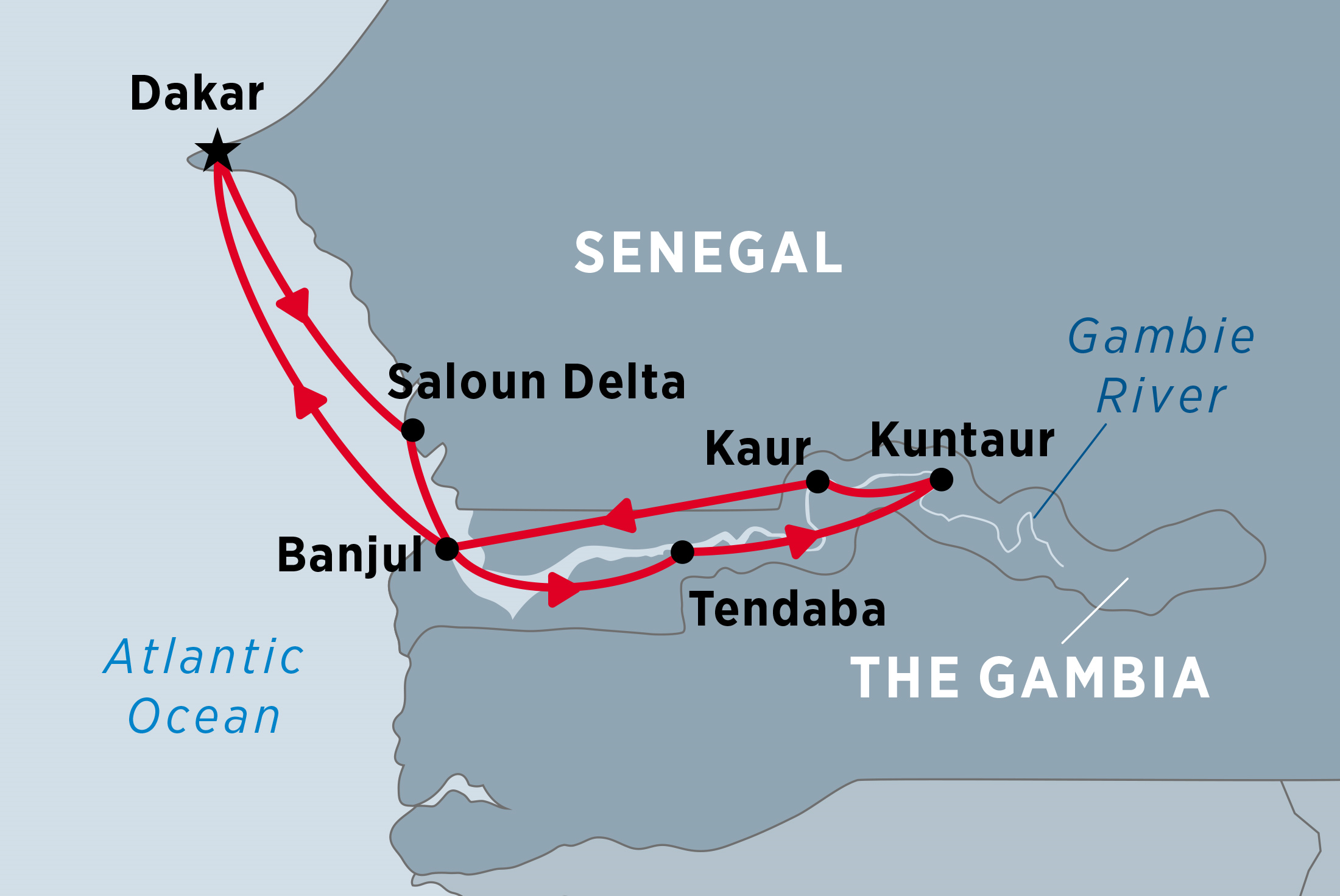