Cruising in the Seychelles (Garden of Eden)

Cruising in the Seychelles (Garden of Eden)

Unlike other larger cruise liners, your small ship – the M/Y Pegasus – has the option to drop anchor beside tiny islands and swim in bays that others cannot reach.. Stop at the stunning Anse Source D’Argent on La Dique with your small group. It’s consistently rated as one of the best beaches in the world, and you’ll soon know why.. Accompanied by a fully qualified onboard naturalist, you will be led on insightful shore excursions through mangrove forests and World Heritage-listed reserves.. Drop anchor in the centre of port towns such as Mahe and La Digue, having the opportunity to explore independently and hop on and off the boat as you please.

White sand beaches and brilliantly blue seas are on full show on this nine-day small ship cruise around the Seychelles islands. Board the twin-hulled Pegasus and enjoy magnificent sea views and crisp salt air from the deck, relaxing with new friends and dining on board. Cruise to uninhabited islands, walk through mangrove forests, spot giant tortoises, explore World Heritage-listed nature reserves and relax on some of the world’s most beautiful beaches. This Seychelles cruising adventure allows you to explore at your own pace and relax into island life. It is, after all, a true slice of Indian Ocean paradise. 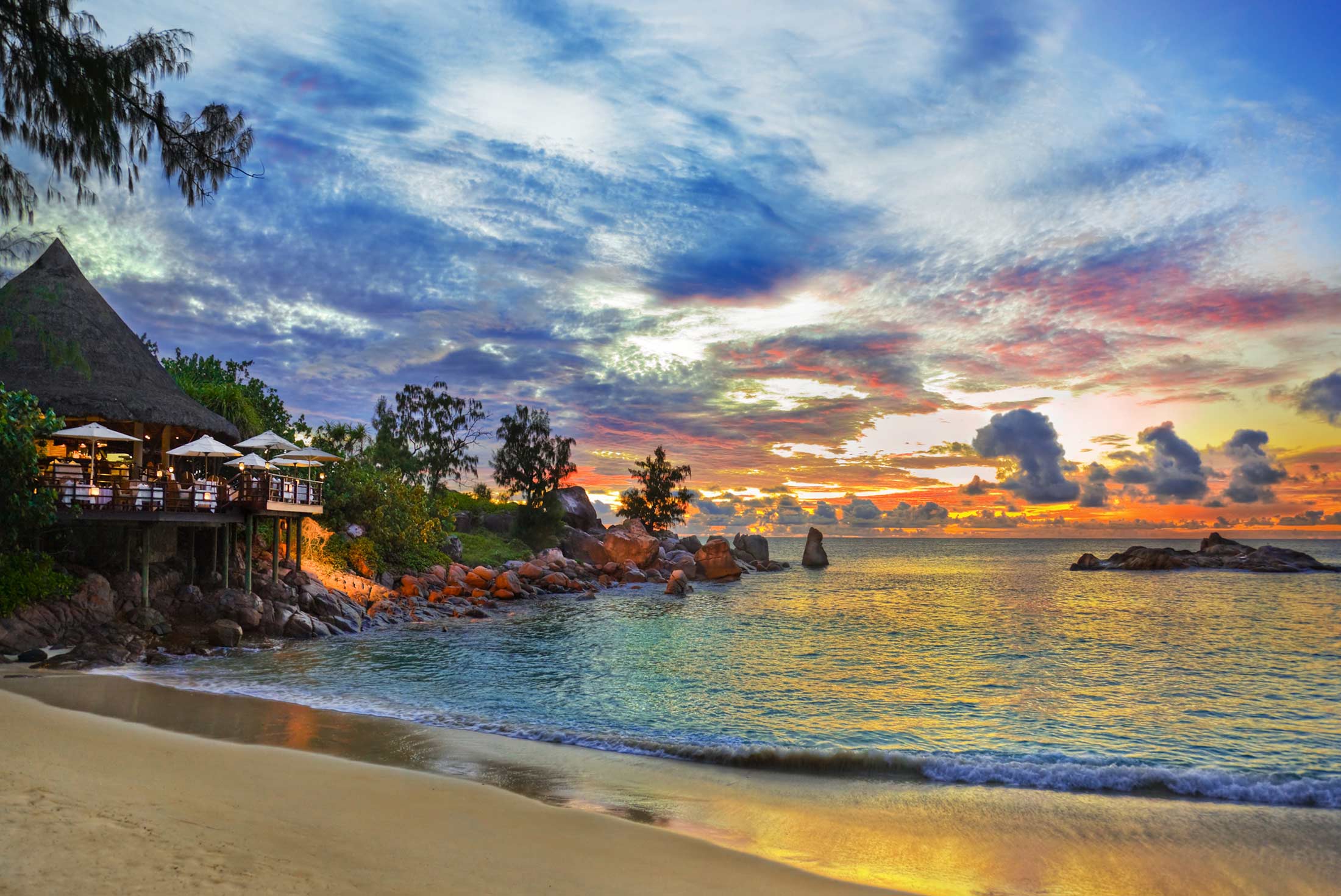 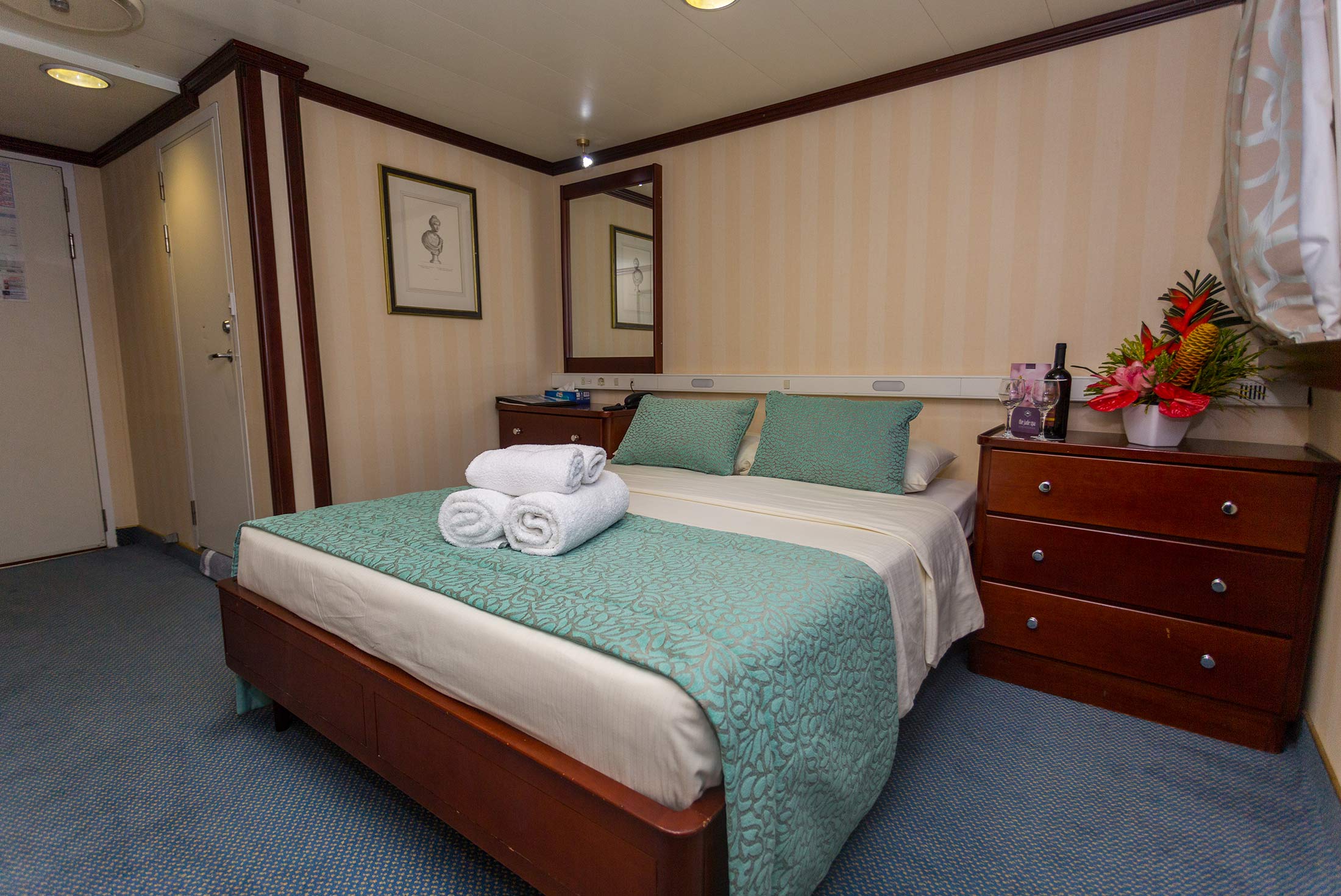 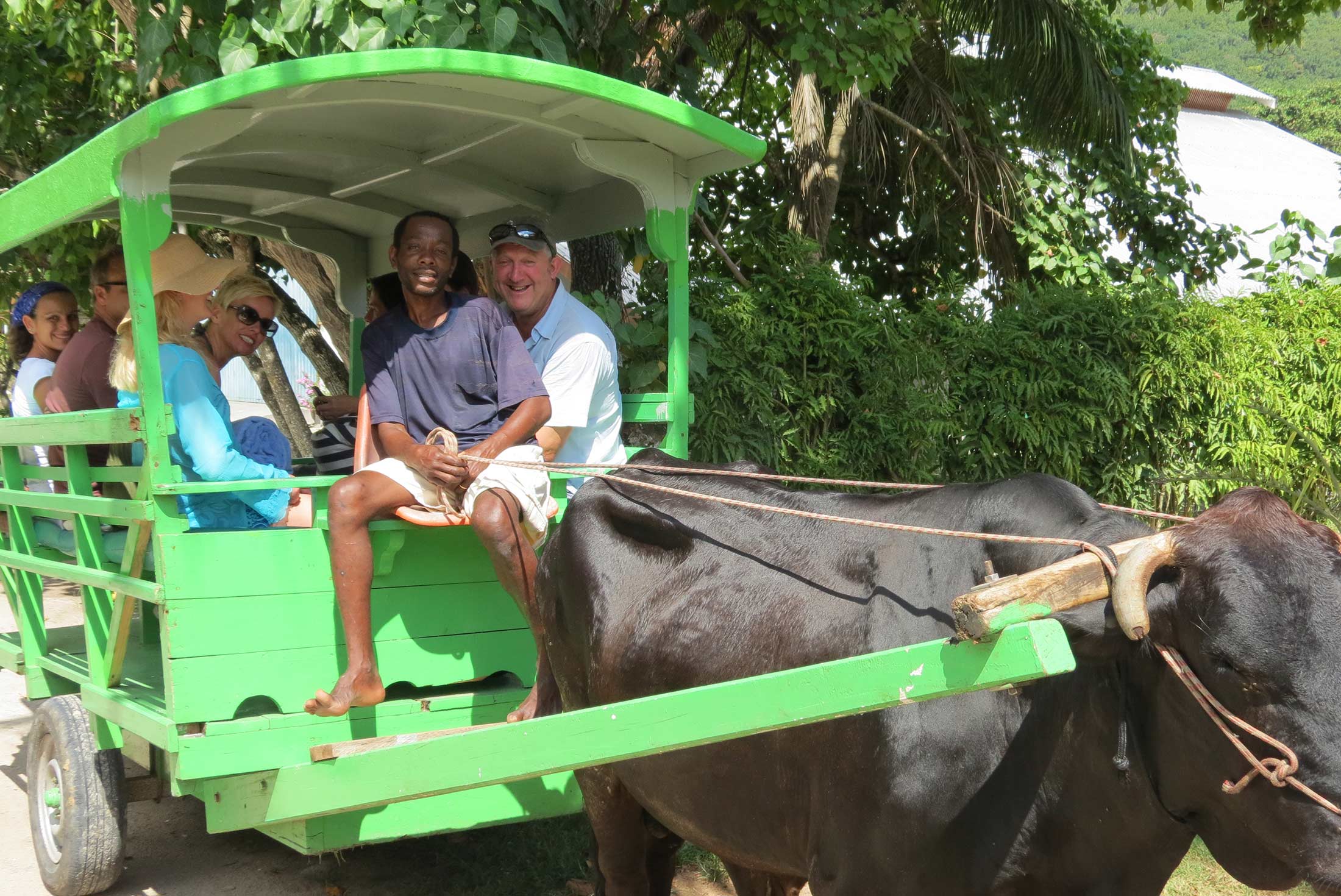 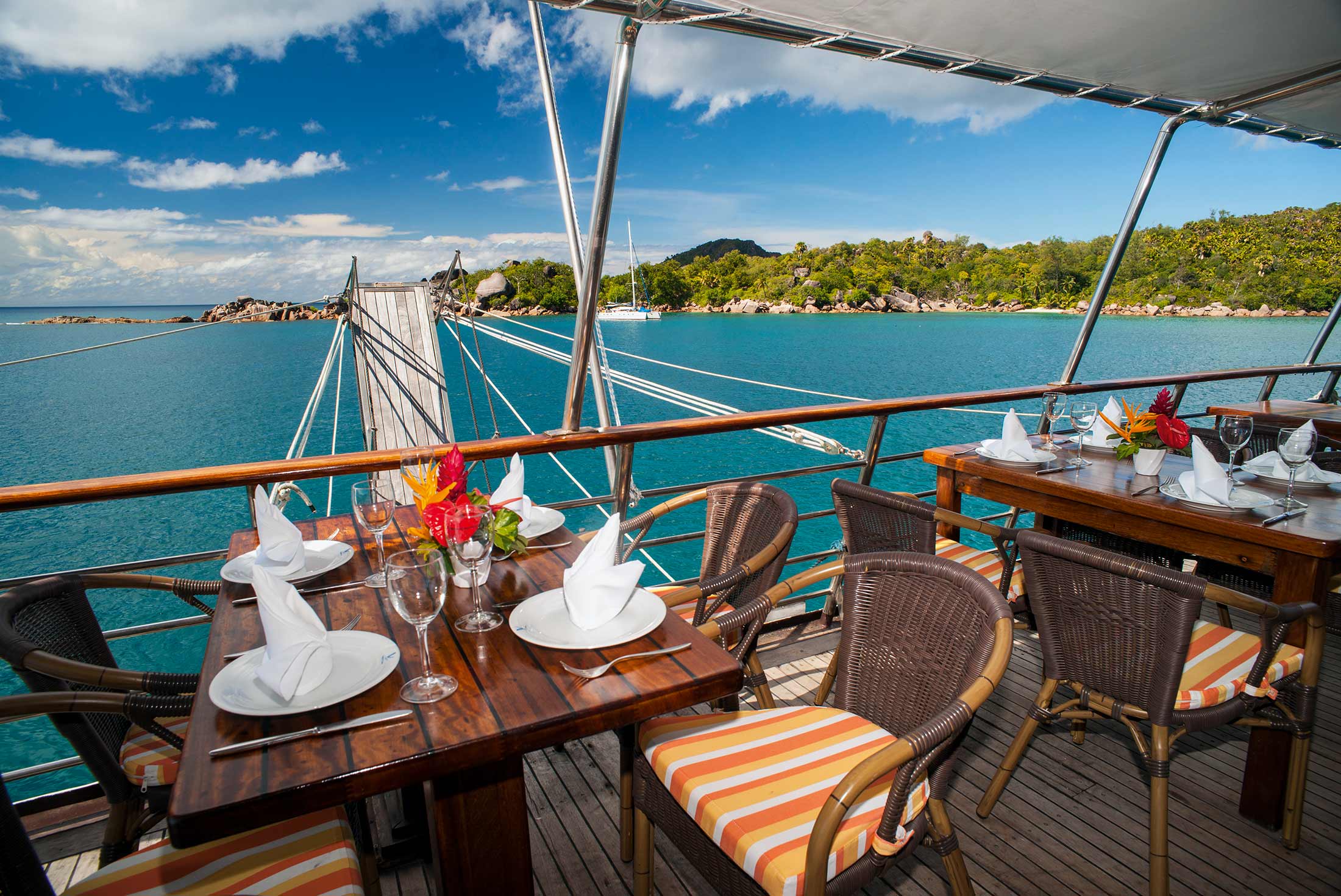 Welcome to the Seychelles! Embarkation will take place between 3 and 4 pm. After the welcome cocktail and safety drill, leave Port Victoria and sail to nearby St Anne for a refreshing swim stop off the ship. Spend the night at anchor near St Anne and enjoy a welcome dinner with your fellow travellers.

Leave St Anne Island early in the morning to reach Curieuse. This morning, visit this uninhabited island for an included walking excursion with a park guide. Lying about one mile to the north-east of Praslin, this island of about two miles long was first given the name Ile Rouge because of its red earth. As part of the Marine Park, the island is strictly protected and only a few families live here. Like Praslin, Curieuse is home to the Coco-de-Mer palm. There is a wild population of about 250 giant tortoises, brought over from Aldabra in the 1980s and a breeding scheme has been in place there for several years. Curieuse was once a leper colony, and the ruins of the houses can still be seen. There is also a large, restored colonial villa, known as the Doctor’s House, where the island doctor lived in the 1870s. Nature trails wind their way across the island, notably through the extensive swamps, home to eight different species of mangrove. Later, return to the beach for a barbecue under the trees and in the afternoon, enjoy the beach and sea activities. Overnight at anchor in Curieuse.

In the morning, sail for Cousin Island for an included excursion. Cousin Island is a granitic island covering 27 hectares and lies approximately 2 kilometres from Praslin island. It became the world’s first internationally owned reserve when it was purchased in 1968 by the International Council for the Protection of Birds (ICBP), now Birdlife International. The objective was to save the last remaining population of the Seychelles warblers. It is not only significant for sea birds and endemic land birds but is also the most important breeding site for Hawksbill turtles in the Western Indian Ocean. The reserve is managed solely by local staff and benefits local communities on the neighboring Praslin island through eco-tourism. Today, Cousin is managed by Nature Seychelles. Conservation activities include monitoring of the island's biodiversity, research, re-introduction of endangered species such as the Seychelles Magpie Robin. Later in the afternoon, reach Anse Lazio, Praslin – one of the most beautiful beaches in the world. Time for water sports and snorkelling! Enjoy an evening at anchor.

In the morning, leave for Aride. A visit to Aride Island is an essential part of the itinerary for any visitor to Seychelles to discover what the islands were like 250 years ago before human settlement. It also hosts one of the most important seabird populations in the Indian Ocean with more breeding species than any other island in Seychelles. Eighteen species of native birds (including five only found in Seychelles) breed on Aride, including the Audubon's shearwater and the Seychelles warbler. It is also home to the Wright's gardenia which is found nowhere else on earth. The island is managed as a nature reserve by the Island Conservation Society of Seychelles and the only human inhabitants are the reserve's staff, including the Island Manager, Conservation Officer and rangers. Aride is also an island where native plants find fertile soil for growth. Because of this, it plays a very important role in the conservation of Seychelles wildlife both terrestrial and marine (with a 200 metre protected area from the coastline). At around midday, sail for St Pierre Island, arriving just after lunch in time for snorkelling and swimming stop. At sunset, leave St Pierre to sail into Baie St Anne, Praslin. Spend the night at dock and a enjoy a Creole-themed evening.

This morning, perhaps opt for an optional excursion to Vallee de Mai Nature Reserve, via the main mountain pass. A scenic coastal drive through picturesque fishing villages and dense forest of contrasting shades of green takes you to where you start a guided tour. Discover the mystical World Heritage-listed site renowned for its Coco de Mer – the largest seed in the plant kingdom. Watch for the Black Parrot, one of the rarest birds in the world and listen to its high pitched whistle. Depart Vallee de Mai for Cote d’Or Beach – voted on several occasions as one of the world's most beautiful beaches – for a swim and a refreshing afternoon drink. Rejoin the boat for an afternoon sailing to the uninhabited island of Felicite or Grand Souer for snorkelling, swimming and optional dive excursion. Take an evening sail to La Digue where you will anchor in the port overnight.

This morning, perhaps take a half-day optional excursion in La Digue – a picturesque, quaint community in the Seychelles. After disembarking by Zodiac, head by bus to the Veuve Nature Reserve and through Union Plantation to l’Anse Source d’Argent beach. Arrive at L’Union Estate and tour the copra kiln, a traditional coconut oil mill and the colonial plantation house. Spend some time at the magnificent Anse Source D’Argent beach, marvelling at some of Seychelles' most impressive rock formations, while enjoying a refreshment. Time for hunting souvenirs at La Passe, the islands main village, before returning to the ship. In the late afternoon, set sail for Moyenne Island, opposite Mahe, to spend the night at anchor.

Take a short, included guided tour around the island before there is time for swim and a barbecue on the deck. This is the last opportunity for snorkelling and swimming before heading back to Mahe. Leave Moyenne Island for Mahe’s Victoria port in the afternoon arriving late at the Inter Island Quay. Enjoy the Captain’s farewell dinner with live music and dancing, spending the night in Mahe.

Disembarkation takes place after breakfast between 9 and 10 am. With no activities planned for today, you are free to depart any time after disembarkation. Make your own way to Mahe Airport for an onward flight connection or perhaps stay on and enjoy one of the amazing resorts in the Seychelles.