A true expedition voyage in every sense, our inaugural journey will explore Indonesia’s rarely visited and little known biodiverse-rich jungle-capped volcanic islands scattered across pristine pellucid waters well beyond traditional tourist routes. Join acclaimed author, scientist and explorer Professor Tim Flannery as we discover a true paradise where untouched dense jungles home to some of the rarest flora and fauna on the planet meet crystalline tropical waters teeming with exotic marine life and some of the world’s best coral reefs all wrapped in a land steeped in history and rich in culture and tradition.

Comprised of some 18,000 islands, this South East Asian archipelago’s fascinating human history dates back almost 2 million years to the fossilised remains of Homo erectus/‘Java Man’ discovered in the early 1890s, while ancient rock art waits in hidden caves on renowned Misool Island. European arrival saw Portuguese spice traders chasing the fragrant bounty of nutmeg and cloves in the 16th Century, this was followed by Dutch colonisation then Japanese occupation during World War II before Indonesia regained its independence in 1949 (excluding the Dutch territory of West New Guinea).

While still a heavy hitter on the spice trading scene, Indonesia is now attracting attention for having one of the richest concentrations of flora and fauna on the planet. One of the world’s 17 mega diverse countries, Indonesia is home to 2 of the planet’s 25 biodiversity hotspots, 18 of the World Wildlife Fund’s Global 200 ecoregions and 24 of BirdLife International’s Endemic Bird Areas. Its dense forests, jungles, oceans and waterways we will be exploring boast more than 25,000 species of flowering plants (40 per cent of which are endemic), 1,592 bird species (430 of which are endemic and 114 considered extremely threatened), 1,051 reptile and amphibian species, 515 species of mammal and half of the world’s fish species. For botanists, birders and nature lovers alike, this expedition offers numerous opportunities to spot once-in-a-lifetime species and experience rare wildlife encounters on remote and unknown islands.

Indonesia’s extraordinary diversity also extends to its population where more than 300 ethnic groups, many with their own set of customs, cultures and languages, live scattered throughout the archipelago. Our expedition embraces some of these cultures with visits planned to some of these villages. Sublime wildlife, incredible underwater encounters, exceptional birding and thrilling cultural exchanges await on ‘Indonesian Explorer’.

The Spirit of Enderby is a fully ice-strengthened expedition vessel, built in 1984 for polar and oceanographic research and is perfect for Expedition Travel.

She carries just 50 passengers and was refurbished in November 2004 to provide comfortable accommodation in twin share cabins approximately half of which have private facilities. All cabins have outside windows or portholes and ample storage space.

On board there is a combined bar/library lounge area and a dedicated lecture room. The cuisine is excellent and is prepared by top NZ and Australian chefs.

The name Spirit of Enderby honours the work and the vision of the Enderby Brothers of London. The Enderby Captains were at the forefront of Antarctic exploration for almost 40 years in the early 1800’s. It also celebrates Enderby Island, arguably the greatest Subantarctic Island in the world. 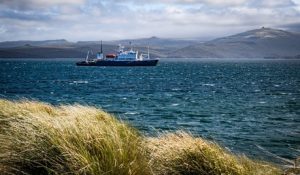 One of the fastest growing locations in Indonesia, Sorong is the starting point of our expedition. Meet your fellow travellers at a central city location and transfer to the ship. Settle into your cabin and meet your expedition team and captain for a welcome on board.

Part of the Sultanate of Tidore during the spice trade wars, Misool Island is the second largest island in the aquatic wonderland that is Raja Ampat (aka Four Kings Islands, named after its four main islands) and our introduction to this stunning marine environment. Discover caves hidden among verdant forests featuring rock art dating back more than 5,000 years, while under its protected waters Dugong, Bumphead Parrotfish, Clownfish, Manta Rays, Ghost Pipefish, Harlequin Shrimp, Pygmy Seahorse and more can be found among spectacular coral gardens and sea-cave cemeteries. We aim to explore the labyrinth of caves and passages including the water-filled dome-topped network of Tomolol Caves and enjoy the extraordinary experience of swimming among thousands of stingless jellyfish.

Kofiau Island is an ancient slice of isolated continental crust covered in lush rainforest, the least visited among the major islands in Raja Ampat and ours to explore. Activities on offer during the day include snorkelling and exploring the island where we will be on the lookout for the endemic birds Kofiau Paradise Kingfisher and Kofiau Monarch, lime-green Kofiau Green-tree Python and, if lucky, the Red Bird-of-paradise.

Lapped by stunning turquoise waters, Raja Ampat’s collection of 1,500 tiny, jungle-cloaked islands are Indonesia’s least developed and easternmost islands. Forming part of the Coral Triangle (one of the most biodiverse marine habitats on the planet), we plan to spend 3 days exploring the bounty of rainbow corals, shoals of fish, ocean-carved limestone formations and jungles of this tropical paradise of forgotten islands. Spotting the Wilson’s Bird-of-paradise and Red Bird-of-paradise will be high on our agenda, with two early morning visits ensuring the best opportunity to see these spectacular birds in their natural habitat. If we are lucky we may also spot the Lesser Bird-of-paradise.

Part of the Su Islands (Mios Su) or the Soe Island Group, a cluster of small islands off the northern coast of Western New Guinea, our visit to little-known and explored Amsterdam Island channels the true expedition nature of our voyage providing an opportunity to explore this pristine environment very few have seen.

Located at the top of the Bird’s Head Peninsula and surrounded by lush rolling hills and imposing spine of the Arfak Mountains, Manokwari is the capital of West Papua. Here we plan to travel into the Arfak Mountains to the Pegunungan Arfak Nature Reserve and enjoy the rare opportunity of exploring the higher elevations and misty tropical montane rainforests with their exceptional suite of endemic plants, animals and birds. During our journey we will be on the lookout for the Western Parotia, Vogelkop Bowerbird and Magnificent Bird-of-paradise among the region’s 320 bird species.

Enjoy an unforgettable day swimming with the iconic Whale Sharks of Kwatisore Bay in Cenderawasih Marine Park. One of the best places in the world to snorkel with these gentle giants, we aim to visit the local fishermen’s Bagans (handmade floating platforms) where these mega-fish, hopeful of catching smaller fish escaping fishermen’s nets, are known to congregate. This spectacular 15,000-square-kilometre marine park is also home to some of the finest coral reef examples in the world and 18 tropical islands where 209 species of fish, 4 species of turtle, dolphin and Blue Whale can be seen.

Exploring the seldom-visited remote coasts, white sand beaches and crystalline waters of twin islands Biak and Supiori in the Schouten Islands archipelago of Cenderawasih Bay is our plan for today. Separated by a narrow mangrove-lined channel, the islands boast the highest endemic diversity in Papua including 17 endemic birds. Among the species we may encounter are the Long-tailed Honey Buzzard, Redcapped Flowerpecker, Yellow-bibbed Fruit Dove, Geelvink Imperial Pigeon, Biak Black Flycatcher and Numfor Paradise Kingfisher and Leaf Warbler. A snorkel excursion exploring the abundant marine life and pristine reefs is also planned.

Flanked by tropical rainforest and at around 800-kilometres long, the biologically-rich Mamberamo River is considered the Amazon of Papua. Snaking through dense, unexplored and unspoiled terrain it sustains a plethora of wildlife including wallabies, tree shrews, crocodiles, frogs, butterflies, endemic birds and hundreds of species of plants, as well as a number of traditional tribes who are largely cut off from the outside world. We plan to Zodiac cruise the river’s mouth searching for wildlife and visit local tribal people.

The peaceful paradise of Lake Sentani, the glittering freshwater lake reflecting the steep, verdant mountains in the Cyclops Strict Nature Reserve of Papua’s capital Jayapura, is renowned for its famous artifacts, traditional motifs, pottery, woodworking and bark paintings. Taking local buses, we will journey to the seldom visited lake’s edge before enlisting traditional longboats, passing stilt houses, as we navigate its many islands. Experience local culture in the form of dance and artists at work making bark paintings and bride money, visit the small church built at the beginning of the 20th Century and World War II monument to General Douglas MacArthur on Gunung Ifar for breathcatching lake views before returning to Spirit of Enderby for lunch and sailing towards Vanimo and Papua New Guinea.

Undoubtedly a highlight on our voyage, we plan to explore by Zodiac the intricate network of lagoons and mangroves surrounding this cluster of salt and freshwater lakes sustaining a myriad of wildlife where the Sepik River (the longest in Papua New Guinea) joins the Bismarck Sea. Used as a staging location for barge traffic by the Japanese during World War II, it is also the location of at least four Allied aircraft that were lost or abandoned between 1943 and 1944. Home to more than 100 villages and inspiring the region’s renowned Sepik art, we expect to enjoy their hospitality and handiwork firsthand.

The self appointed ‘Prettiest Town in the South Pacific’, Madang is bound by lush rainforest, calm blue waters studded with volcanic islands, 34-sunken ship dive sites, Tupira’s supreme surf break, flourishing coral gardens and rich history. For those disembarking, a transfer to a central hotel, or the airport, will conclude your voyage, OR continue the adventure with us on ‘Melanesian Discoverer’.

Itineraries are subject to change.
Prev
Next