The Sub-antarctic Islands are tiny havens for some of the most abundant and unique wildlife on the planet. They lie in the cool temperate or Sub-antarctic Zone to the south and east of New Zealand in the great southern ocean that encircles Antarctica. This is a windswept and at times forbidding swath of sea, surprising in its fecundity.

It is little wonder that these islands of the Sub-antarctic are all Nature Reserves and World Heritage sites. As such, the New Zealand and Australian Governments that administer them afford the Sub-antarctic Islands the highest protection. Tourism is allowed, but only under special license, and numbers are restricted to minimise impact and to ensure a world class wilderness and wildlife experience. The Sub-antarctic Islands not only play an important role in the Southern Ocean ecosystem – they also have a rich human history. From their discovery 200 years ago, they were exposed to an era of exploitation. In time we began to understand their true worth and treasure them for their intrinsic value as wild and beautiful places. Visiting them is a pleasure and a privilege. You will not be disappointed.

This is without doubt one of the most inspirational and informative journeys or expeditions into the Southern Ocean ecosystem that one can make anywhere in the world. Long recognised for their rich biodiversity, the Sub-antarctic Islands lying to the south of New Zealand are UNESCO World Heritage sites. This places them in a select group of only 180 natural sites that have been designated as ‘the most important and significant natural habitats’ on the planet. They are also afforded the highest conservation status and protection by the Australian and New Zealand governments and access to these islands is by permit only. On this expedition we offer you the unique chance to explore, photograph and understand these wonderful places in the company of some of the most knowledgeable and passionate guides.

As a young biologist, Heritage Expeditions founder Rodney Russ first visited these islands in 1972 with the New Zealand Wildlife Service. He organised New Zealand’s first commercial expedition there in 1989 and it was only natural that his family should travel with him, what wasn’t predicted was that they would join him in the business and be as passionate about the conservation of this region as he is. Now, many years and over 100 expeditions later, Rodney’s sons Aaron and Nathan continue their father’s enthusiasm and legacy for this region with Heritage Expeditions. As the original concessionaire we enjoy good relationships with the conservation departments and some of the access permits we hold are unique to these expeditions.

The name we have given to this voyage ‘Galapagos of the Southern Ocean’ reflects the astounding natural biodiversity and the importance of these islands as a wildlife refuge. (The book Galapagos of the Antarctic written by Rodney Russ and Aleks Terauds and published by Heritage Expeditions describes all of these islands in great detail.) The islands all lie in the cool temperate zone with a unique climate and are home to a vast array of wildlife including albatross, penguins, petrels, prions, shearwaters and marine mammals like sea lions, fur seals and elephant seals. The flora is equally fascinating; the majority of it being like the birds and endemic to these islands.

This renowned expedition includes four of the Sub-antarctic Islands, The Snares, Auckland, Macquarie and Campbell. Each one is different, and each one is unique – just like this expedition.

The Spirit of Enderby (Professor Khromov) is a fully ice-strengthened expedition vessel, built in 1984 for polar and oceanographic research and is perfect for Expedition Travel.

She carries just 50 passengers and was refurbished in May 2019 to provide comfortable accommodation in twin share cabins approximately half of which have private facilities. All cabins have outside windows or portholes and ample storage space.

On board there is a recently updated combined bar/library lounge area and a dedicated lecture room. The cuisine is excellent and is prepared by top NZ and Australian chefs.

The name Spirit of Enderby honours the work and the vision of the Enderby Brothers of London. The Enderby Captains were at the forefront of Antarctic exploration for almost 40 years in the early 1800s. It also celebrates Enderby Island, arguably the greatest Sub-antarctic Island in the world. 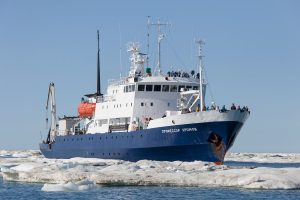 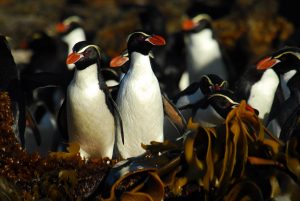 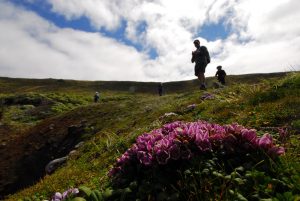 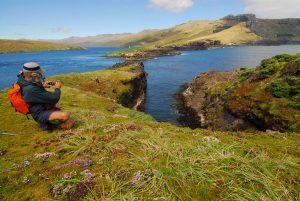 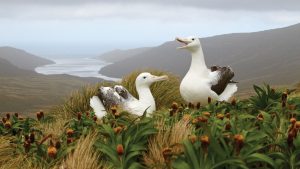 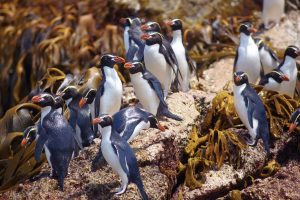 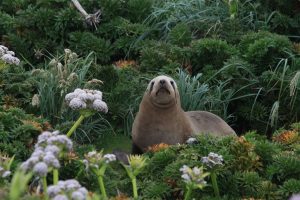 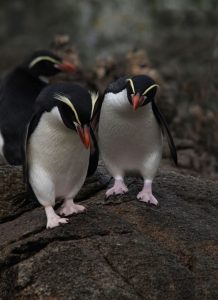 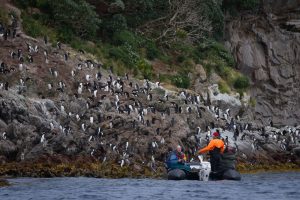 Day 1: Invercargill or Dunedin
Meet your fellow voyagers and expedition staff for an informal get-together over dinner at the hotel, where you will stay overnight.

Day 2: Port of Bluff or Otago Harbour
We transfer you to the port where staff will welcome you on board the Spirit of Enderby, and as you settle into your cabin, our adventure begins.

Day 3: The Snares – North East Island
North East Island is the largest of The Snares and staggeringly, this one island is claimed by some to be home to more nesting seabirds than all of the British Isles together. Zodiac cruising the rugged coastline we learn how the islands got their name and encounter Snares Crested Penguins, Cape Petrel and Buller’s Albatross on the imposing cliffs. We are also likely to encounter Antarctic Terns, White-fronted Terns, Red-billed Gulls, Tomtits and Fernbirds.

Day 4: Auckland Islands – Enderby Island
Named for the same distinguished shipping family as our own vessel and one of the most beautiful islands in the group, this is a great birding location and a chance to see everything from the famous Southern Royal Albatross and Northern Giant Petrel to parakeets, Bellbirds and the endemic shag, teal and snipe. Sandy Bay is one of three breeding grounds on the Auckland Islands for the rare Hooker’s, or New Zealand, Sea Lion.

Day 5: Auckland Islands – Carnley Harbour
These islands have witnessed many a shipwreck in days gone by. Loaded in human history, they harbour tales of castaways, bullion and Coastwatchers through to today’s scientific visitors. Today we land in Carnley Harbour and, if weather and sea conditions permit, visit the Shy Mollymawk colony at South West Cape or, if weather is not suitable, we will select one of a number of other sites available to us.

Day 6: At Sea
As we make our way through an area known as the Furious Fifties in the tumultuous Southern Ocean, we will learn more about the flora and fauna as we prepare for our arrival at Macquarie Island. En route there are great birding opportunities which may include the Wandering Albatross, Royal Albatross, Black-browed Albatross, Light-mantled Sooty Albatross, Salvin’s Albatross, Grey-headed Albatross, Northern and Southern Giant Petrel, Sooty Shearwater and Little Shearwater. We will endeavour to spot the Fairy Prion, Fulmar Prion and Antarctic Prion – never an easy task – but we should get some great views. Other species to be on the lookout for include the Soft-plumaged Petrel, Mottled Petrel, White-headed Petrel, Grey-faced Petrel, White-chinned Petrel, Grey-backed Storm-Petrel, Wilson’s Storm-Petrel and the Black-bellied Storm-Petrel.

Days 7 to 8: Macquarie Island
Described by one Australian explorer as “One of the wonder spots of the world” this is the only place in the world where the beautiful Royal Penguin breeds. Three other species of penguins, the King, Gentoo and Rockhopper also breed here. You will never forget your first experience of a noisy ‘penguin city’, where the dapper inhabitants show no fear of their strange visitors and where you will be immersed in a tumult of chattering, feeding chicks; territorial disputes; petty pilfering and courtship displays. This all happens amongst the hundreds of Southern Elephant Seals lolling on the beaches and dunes. On arrival we meet with scientists and Park Rangers based here who will accompany us on all our landings.

Day 9: At Sea
We head north from Macquarie Island through waters rich in seabirds towards Campbell Island. We invite you to join the captain on the bridge, to keep a keen lookout for birds and for whales. Today there will also be briefings and lectures on Campbell Island in preparation for our visit there.

Days 10 to 11: Campbell Island – Perseverance Harbour
We spend two days exploring the island by foot taking in the panorama of rocky islets and sea stacks; once the lonely preserve of settlers and seal hunters and now returned to nature. Enjoy an easy walk to the nesting site of the Southern Royal Albatross at Col Lyall or walk across the hills to Northwest Bay and see the strange and beautiful megaherbs on the hills. These huge pink and yellow wild flowers have adapted well to the harsh conditions. We also seek out other wildlife such as Campbell Island Shags, Light-mantled Sooty Albatross and, on the beaches beyond, young male sea lions testing their strength.

Day 12: At Sea
At sea en route to the Port of Bluff, take the opportunity to relax and reflect on an amazing experience. We will recap the highlights of our expedition and enjoy a farewell dinner tonight as we complete the last few miles of our journey.

Day 13: Invercargill
We arrive at the Port of Bluff early in the morning. After breakfast, customs formalities and a last minute opportunity to bid farewell to your expedition team, you disembark and board our complimentary coach transfer to downtown Invercargill or Invercargill Airport. Enquire for a full itinerary and/or a Bird and Mammal List. NOTE: Voyages depart from both Invercargill and Dunedin, please see downloadable brochures for embarkation city of your selected voyage.