Delhi is all kinds of delhi-ciousness – wash down the beautiful street chaos with a fresh fruit beer and some delectable street food.. You might think you’ve seen the Taj Mahal, but you ain’t seen nothing yet until you’ve checked out this teardrop in the morning light.. Ditch your alarm, there’s only one way to wake up in this world and that’s with a sunrise sail along the Ganges.. Lumbini is no ordinary town. Visit the birthplace of Gautama Buddha, the founder of Buddhism, and tour its temples and the legendary Ashoka Pillars.

Head from bustling Delhi to remote Tordi, get down and dirty with the best street food, gape at the Taj, cruise down the holy Ganges in Varanasi, hang in Buddha’s hometown (Lumbini), search for sloth bears and rhinos at Chitwan and finish up in Kathmandu. Got a sweet tooth? India’s got the cure. Take one soft, fluffy ball of buffalo milk dough. Deep fry until it’s the texture of a donut. Drop into sugar syrup flavoured with cardamom powder, rose essence and saffron. Eat. Repeat. 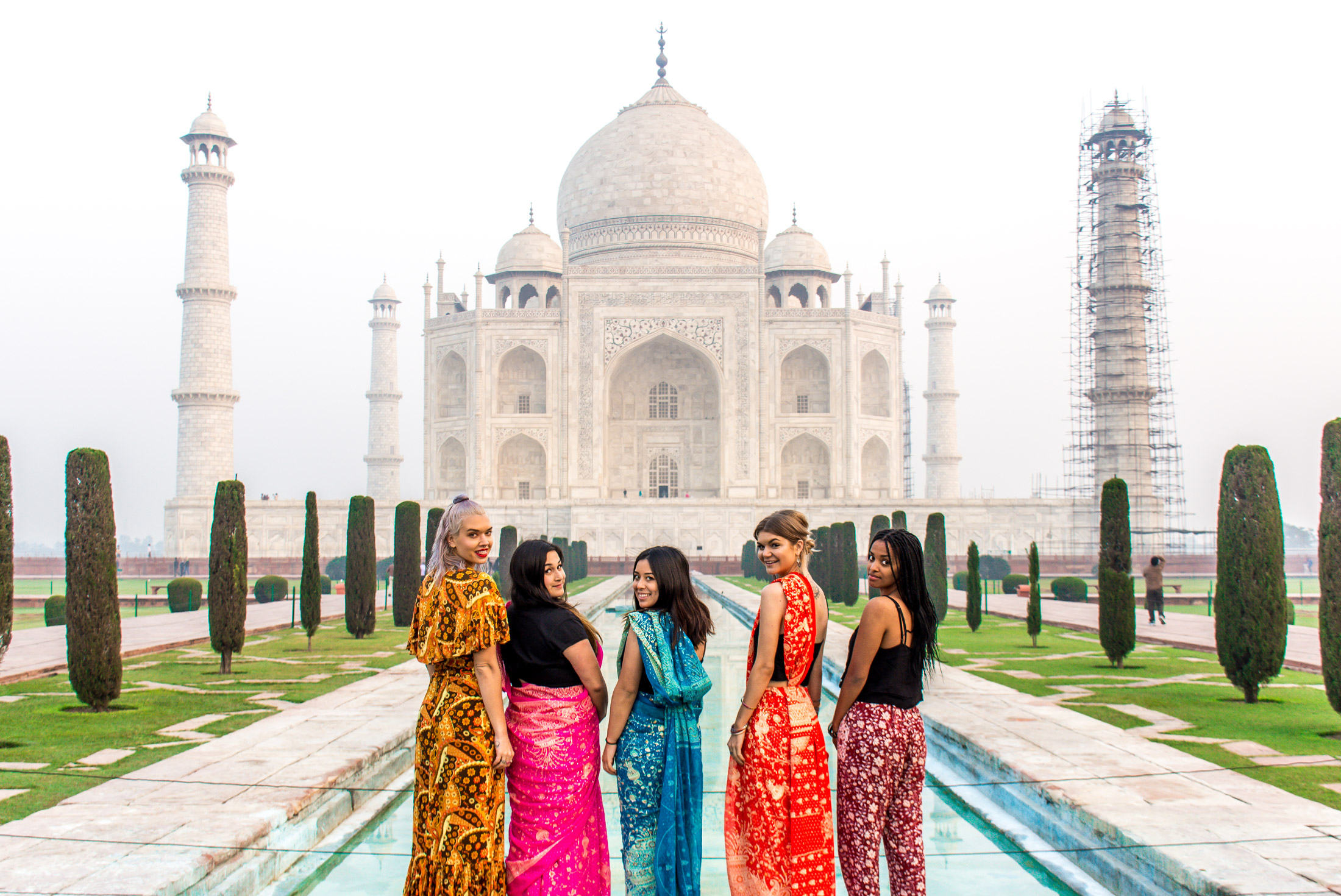 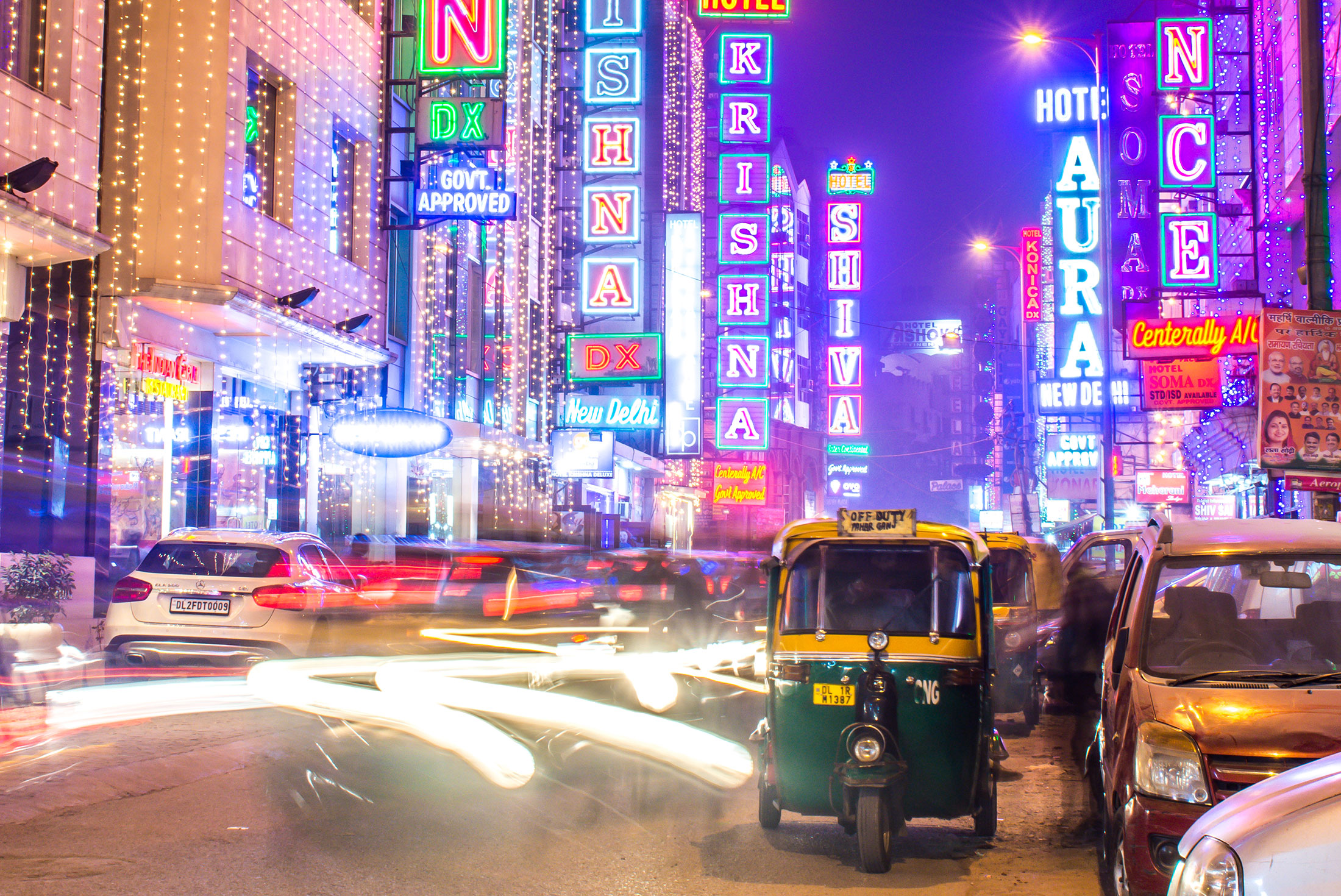 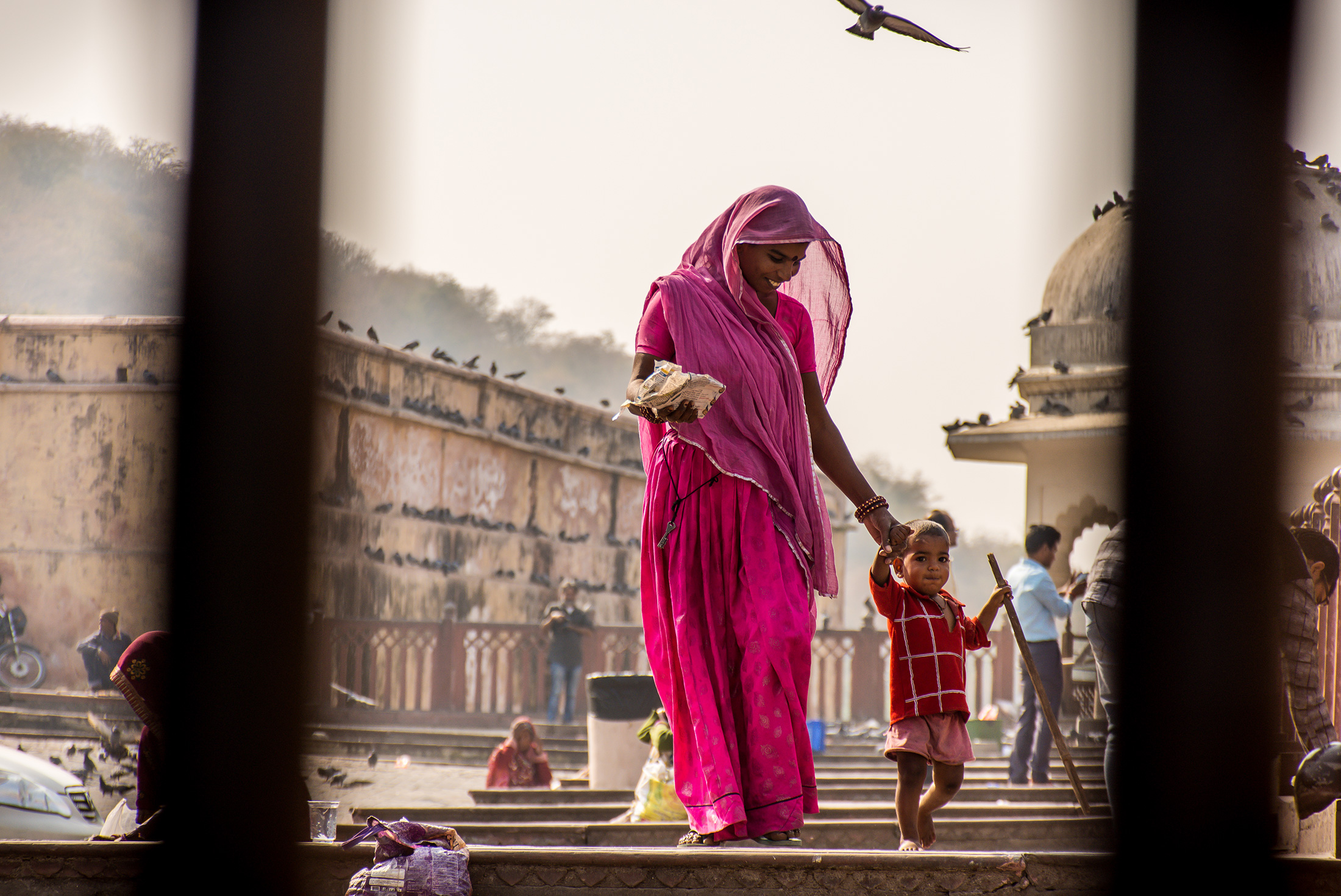 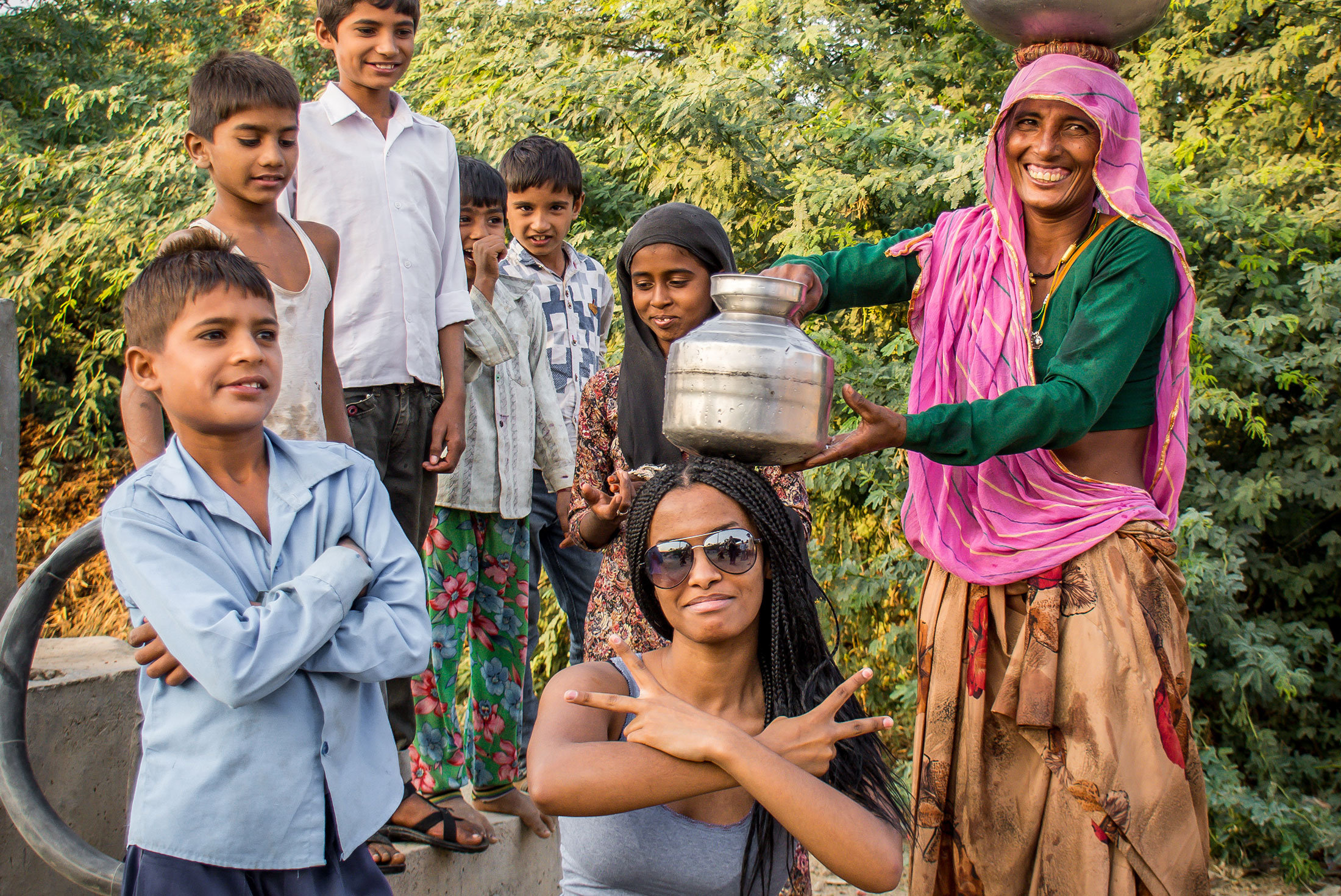 This Himalaya adventure kicks off in Delhi. Meet your tour leader and new travel mates at a 6 pm welcome meeting. If you arrive early, there's plenty to do in this wonderfully chaotic city. Wander the streets, sip on your first chai or practice haggling in one of the many markets. If you prefer some structure, there's a variety of Urban Adventure day tours that offer a great first taste of Delhi.

Keep this one quiet. Your next destination takes a bit of work to get to, but that’s because it’s our little secret! Journey through picturesque countryside by train, first to Jaipur, and then onwards by private vehicle to Tordi (approximately 7 hours). This remote and rarely visited village offers a fantastic glimpse of the real Rajasthan. We stumbled across it years ago, and everyone loved it so much we put it on the itinerary. The locals will feed you and you'll sleep in a 16th-century palace with its owner as your host. And there's a ruined temple and fortress nearby. Settle in, then savour delicious local flavours at an included dinner of tonight.

Kick on to Jaipur (approximately 2.5 hours), India's oh-so-pretty 'Pink City'. You'll have plenty of free time here to haggle to your heart's content at the bazaars and backstreets where vendors sell a variety of textiles, precious and semi-precious gems and stunning blue pottery. Drop by one of India’s finest palaces, the Royal City Palace, where the guards’ moustaches are almost as impressive as the building itself. Foodies will want to hit the streets for raj kachori chaat, a big fluffy chaat served with chutney, yoghurt, chilli and potato. Then cool off with a lassi from Lassiwala on MI road, Jaipur's oldest and most famous lassi shop. Cinema buffs won't want to miss the chance to take in a Bollywood blockbuster at the spectacular Raj Mandir Cinema.

If you're keen for a different view of the Pink City, an optional early morning hot air balloon ride is a trip highlight for many visitors. For more information please see the 'Important Notes' section of your trip notes. Later in the morning, you’ll drop by Hawa Mahal (Palace of the Winds), the impressive five-storey facade with pink and honeycombed windows is it the most photographed building in the country after Taj Mahal. Then it’s out to the old capital of Amber and an exploration of the hilltop fort complex known as the Amber Fort. The rest of the day is free for you to use as you like.

Take advantage of the chance to rub shoulders with the locals on a five-hour public bus ride to Agra today. Agra might not be the prettiest city in the world, but the minute you check out its top-notch site that won’t matter one bit. Of course, we're talking about the Taj Mahal, India's most enduring symbol and an epic monument to love and loss. Get your first glimpse today, then go in for a closer look tomorrow.

This is a bucket-list day. For some reason local families find it more interesting to take photos of you than the actual Taj Mahal. But none of it matters, you'll be too busy standing there with your mouth gaping open to notice. If you’ve got the energy there’s the option to head out to Agra Fort and stroll the palatial gardens of this red sandstone stronghold with cheeky monkeys in tow. Then it's on to the next stop - Varanasi. Tonight it’s time for a unique slice of Indian life aboard an overnight train (approximately 12 hours).

One of holiest cities around, Varanasi is the ultimate destination for Hindu pilgrims who travel from far and wide to experience this spiritual city. Overflowing with temples, shrines and devotees, it might not be one of the world's cleanest cities but there’s no doubt it’s one of the most amazing. Maybe take the chance to perfect your yoga in this epic chakra-balancing place. Otherwise, just chill out and soak in the spiritual surrounds as it's an early start tomorrow.

Today’s an early start, but it’s completely worth it - a sunrise boat ride along the sacred Ganges is a revelation. Even if you're not the spiritual sort, you can't help but get goosebumps. Pass the many ghats (stairs leading to the water) and temples along the river, and watch thousands of Hindu pilgrims cleanse their sins in the holy water as the sun bathes the surrounds in glorious shades of amber and orange. Afterwards, set off by auto rickshaw to the oldest part of the city, to explore its maze of narrow alleyways packed full of small shops, stalls and lumbering cows. See pilgrims performing rituals  unchanged for hundreds of years and pass chiming temples as wafts of incense fill the air.

Wave goodbye to India as you travel to the border (Sunauli border crossing) and enter into Nepal, continuing to the town of Lumbini. Make sure to charge up your music and fish out your book as it's a long day of travel (about 8-10 hours including stops). Lumbini is no ordinary border town, but the birthplace of Gautama Buddha, the founder of Buddhism, and one of his four holy places of pilgrimage. Check out the beautiful Ashoka Pillars and hop on cycle rickshaws to the Maya Devi Temple, the actual site where Lord Buddha is thought to have been born. Later on, bunk down in a jungle camp for the night.

Take off you religious hat and pop on your safari one as you drive to Chitwan National Park by private vehicle (approximately 5 hours). UNESCO (who know at thing or two about this kind of stuff) declared it a World Heritage site in 1984, and it offers some of the best wildlife viewing in Asia. Think the Jungle Book come to life with rhinos, deer, monkeys and a wide array of birds, including Nepalese wild chickens, all found here.

This morning you’ll hop aboard a jeep, meet your local guide and take a safari drive through Chitwan National Park. Maybe you might catch a glimpse of one of the 100-or-so Bengal Tigers that call the park home. There are also a number of optional activities available through your accommodation, including biking, bird watching, cultural performances, canoe rides and village tours.

On to your final destination of the Nepalese patchouli–scented capital, Kathmandu (approximately 7 hours). Maybe book in for a massage or a yoga session when you get there to ease those body kinks. With the rest of your free time, perhaps visit the giant Buddhist Stupa at Bodnath, head out into the narrow streets – home to holy men, monks, bicycles, and sacred cows – and buy souvenirs or chill out with cool drink.