Oh, Central America, what a land. Get a taste of four different countries on an epic Latin adventure that takes in the sights and offers a whole heap of optional activities too.. Cerro Verde is waiting to be explored. Enjoy a full day at leisure in one of El Salvador’s most beautiful national parks – climb a volcano crater or take the plunge in the pristine lake. The choice is yours!. Island life doesn’t get much better than Ometepe in Nicaragua – volcanoes, wildlife-rich rainforest, stunning beaches, ancient rock carvings, and a massive lake are all on your plate.. Central America likes to keep you on your toes – hike, cycle or zip-line through the steamy cloud forests of Monteverde in Costa Rica and get up close to nature in one of the world’s most incredible landscapes.

From the Guatemalan highlands to the cloud forests of Costa Rica and all the adventure towns and surf spots in between, roll through four Central American countries for a taste of what this incredibly diverse region is plating up. From tropical forests alive with jungle melodies to vast freshwater lakes and active volcanoes, this pocket of Central America is pure, unrefined paradise. Whether you’re climbing a volcanic crater in Cerro Verde, spotting colourful birds perched on the colonial facades of Granada, standing in the shadow of mighty Arenal Volcano or spotting sloths among the canopy of Monteverde Cloud Forest – this trip through Guatemala, El Salvador, Nicaragua and Costa Rica is perfect for those who like their adventures ‘la forma natural’. 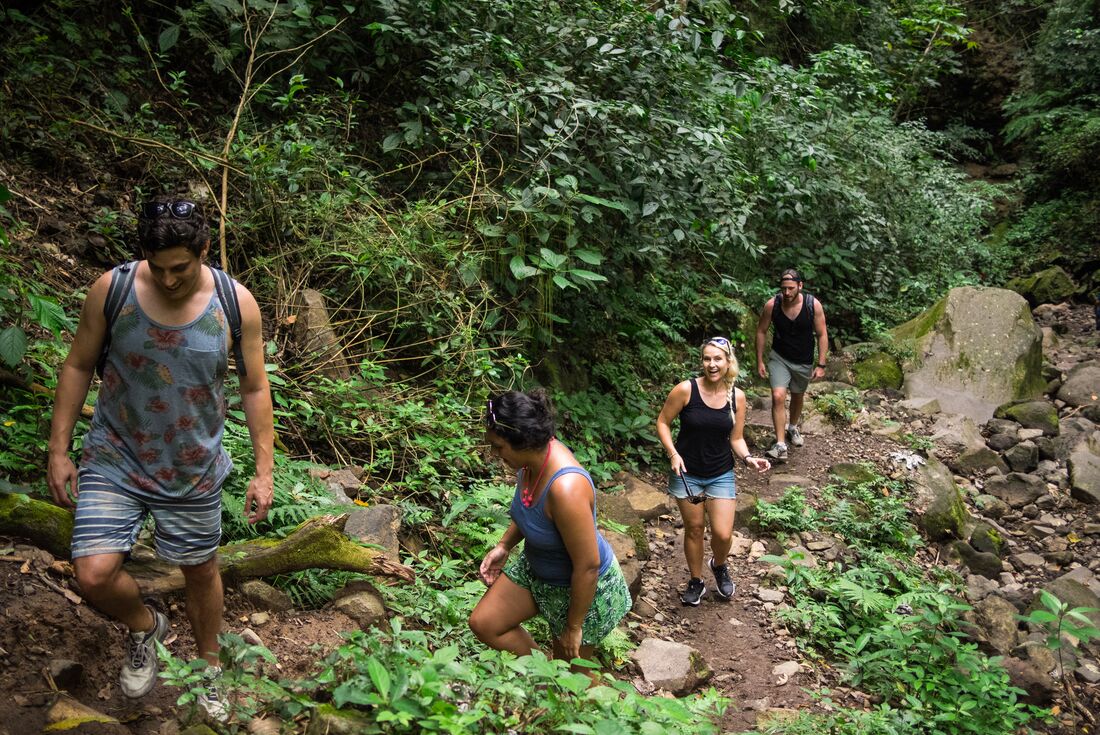 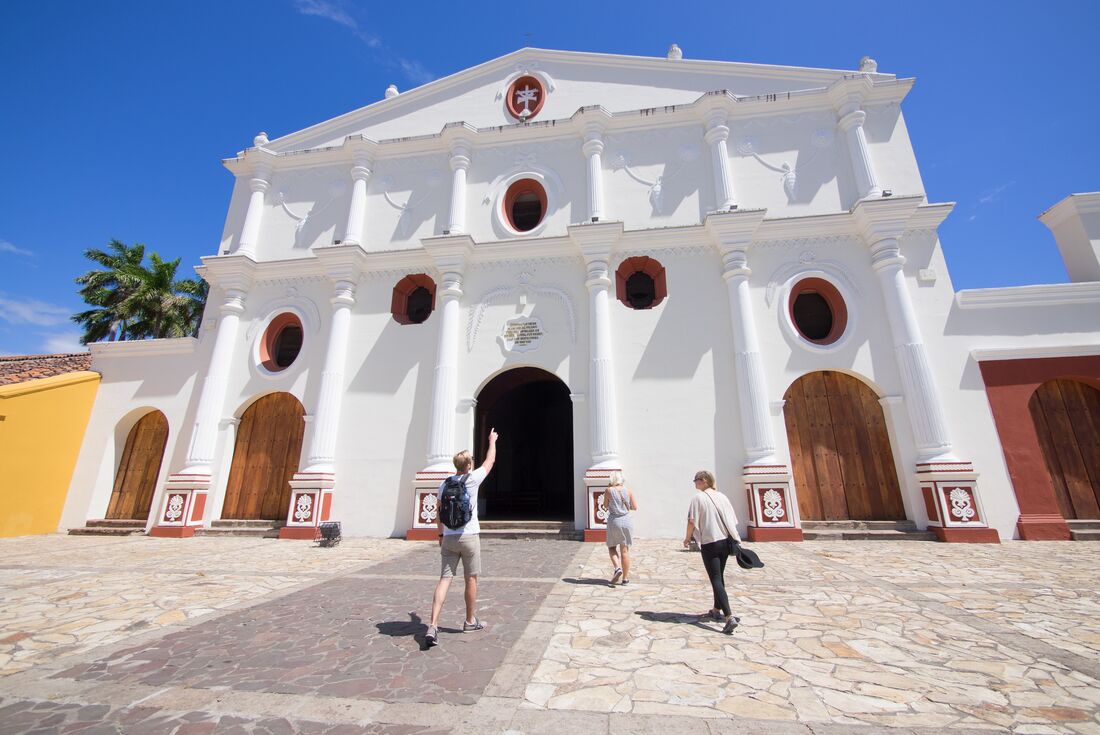 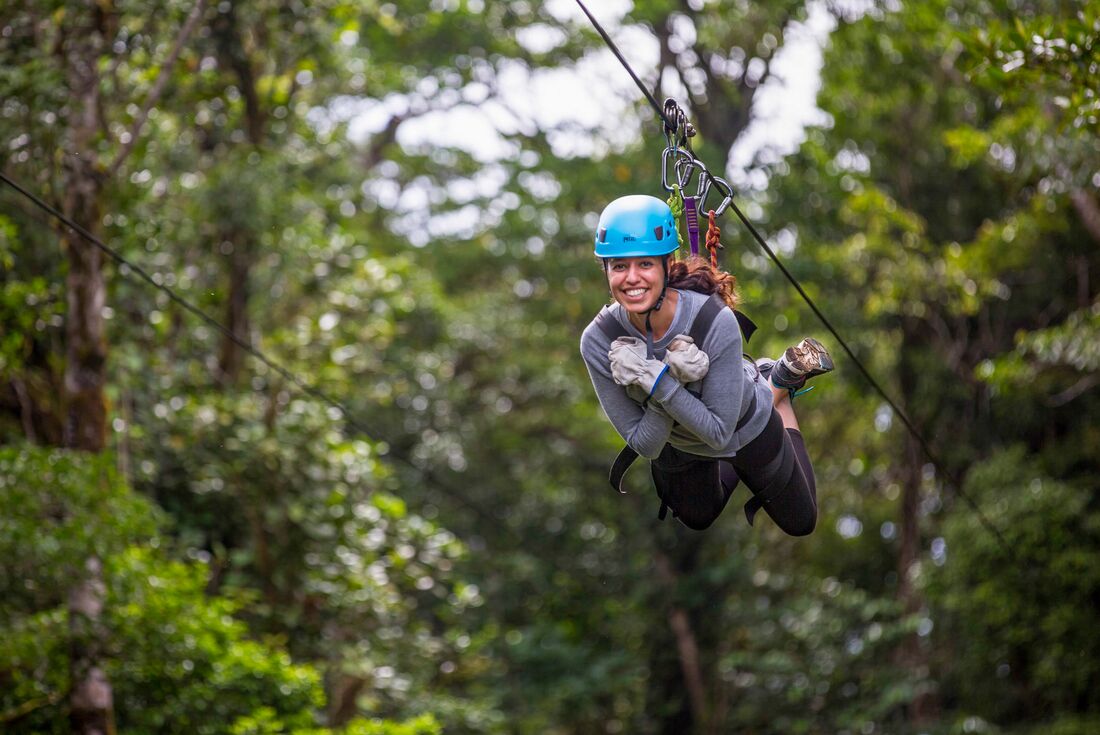 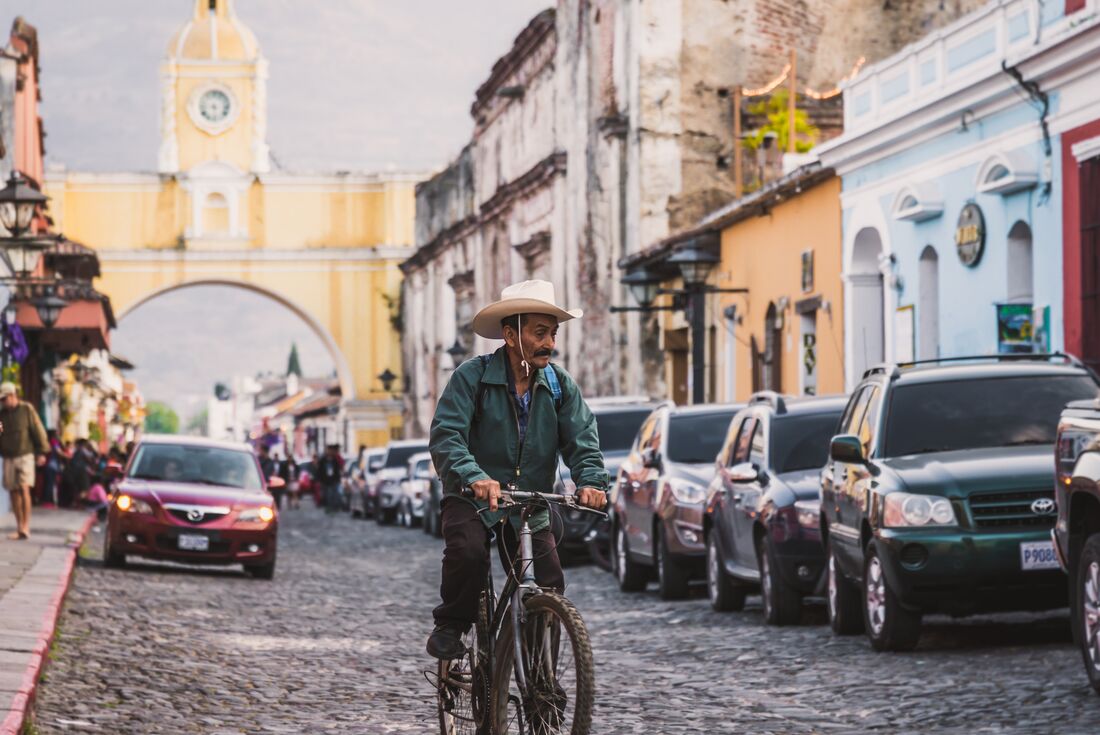 Bienvenidos! Welcome to Guatemala. There are no planned activities today until your important welcome meeting at 6 pm. If you arrive early, why not head out on a caffeine-fuelled coffee quest with Urban Adventures – head beyond the city to explore local plantations and get buzzed and brewed as you learn the history of the bean in Guatemala. Find out more at urbanadventures.com. After the meeting, take an orientation walk around the city with your leader and acquaint yourself with the cobblestone streets and colonial-era plaza. In 1773, the city of Antigua was destroyed by an earthquake, but many of the colonial buildings have been restored. For dinner tonight, perhaps sample a tamale, a local dish served in corn husk, or some pepián, a rich, meaty stew, then surely it’s time for a mojito with your new friends!

Rise and Shine! Today is an early start as you journey across the Guatemalan border to your next destination, Cerro Verde, El Salvador (approximately 5 hours). From rolling hills to rolling R’s, watch the world go by from the comfort of your private vehicle as you travel through lush volcanic landscape and endless mountain terrain all while learning the local lingo from your leader in an informal Spanish lesson. Arrive in Cerro Verde and enjoy the rest of the day at leisure.

Today is a free day for you to get outdoors! Opt to hike up to the edge of Santa Ana’s Volcano crater for some more spectacular views of Lake Coatepeque, Juayua and Izalco Volcano. Alternatively, instead of admiring it’s view from the volcano crater, why not take a dip in Lake Coatepeque! There are many ways to keep busy in one of El Salvador's most beautiful national parks.

Continuing south by private vehicle today, pass through the capital of San Salvador on your way to San Miguel (approximately 3-4 hours). Resting in the shadows of Chaparrastique, an active volcano that sets the backdrop to this vibrant town, San Miguel has rebuilt itself into one of the largest and most populated cities in the country since facing a severe earthquake in 1917. El Salvador is also home to Papusas, a type of flatbread made from cornmeal and often stuffed with delicious fillings like cheese, chicharrón (fried pork) or refried beans. Today in San Miguel, visit a local street vendor and watch a papusa making demonstration, then try some of course!

Say a quick hola and adios to Honduras as you cross through two borders to reach ‘the land of lakes and volcanoes’, Nicaragua (or Nica as it’s known as locally). The 6-hour drive (plus stops) will be well worth the ride as you’re welcomed into the charming, artsy and sophisticated city of Leon. Why not refuel after your journey with some traditional Nicaraguan dishes, Gallo Pinto, with its hearty combination of rice and beans, is considered a national symbol – alternatively, perhaps try out some of your new Spanish skills and order a Quesillo, a cheesy treat made of corn tortillas, pickled onion and sour cream. Once the capital of Nicaragua, Leon has long been the heart and soul of the country’s political movements, which is demonstrated through the city’s colourful street murals – an artistic reflection of fallen heroes and revolutionary icons. Home to one of the oldest universities in Central America, Leon is considered a ‘college town’ and is known for its youthful, fun atmosphere and energetic nightlife. This evening, why not head out with the group for some bachata or salsa dancing!

This morning is free to explore Leon, perhaps check out the Basílica de la Asunción – Central Americas largest cathedral – or stop by the Museo Histórico de la Revolución for an insight the revolutionaries who fought hard for the freedom of their country. Alternatively, you might like to go volcano sandboarding! (This is the only place in the world that you can do it). Afterwards, if you’re feeling peckish, why not fill up on the traditional breakfast of scrambled eggs and gallo pinto before jumping on a local bus this afternoon to Granada. First, take a taxi from the hotel to the bus station, next board a local bus bound for Managua that will depart when it's full and takes around 2-3 hours depending on the amount of stops it needs to make and the complexity of onloading and offloading the passenger’s luggage. There will be about a 30-45-minute transit in Managua before taking the next public bus to Granada with a duration of approximately 1.5 hrs, and finally taking a 20-minute taxi ride to the hotel. Founded in 1524, Granada is the oldest city in Nicaragua and home to iconic Moorish and Andalusian landmarks that have survived repeated pirate invasions. Draped in colourful colonial architecture and oozing aesthetic charm, this enchanting city is set on the banks of Lake Nicaragua and is surrounded by active volcanoes.

Today is free to explore Granada, one of Central America’s least spoiled colonial towns. Perhaps you’d like to take a guided tour of the city, bargain hard in the markets, or wander the cobblestone streets, snapping photos of the colourful buildings. If you’re an adventure enthusiast, opt to hire a kayak and paddle around the islets of lake Nicaragua, rent a bicycle and ride to Laguna De Apoyo (a 200 year old lake set into a lush forest crater), or hike through the lush flora and fauna along the Mombacho volcano crater trail. For a cultural insight into the heritage of the Nicaraguan people, the city of Masaya aka ‘City of the Flowers’ offers a mixture of folkloric entertainment, from marimba music to street theatre. If you’re looking to purchase some traditional handicrafts, then you’ll also find ‘Mercado de las Artesanías’ – a craft market offering handmade souvenirs reflective of the Masaya area. After a day of exploration, why not enjoy an evening along Calle la Calzada – grab a drink at one of the many outdoor bars and watch the wandering performers, from mariachis to break dancers, bring the street to life.

This morning, enjoy an included breakfast. Then, travel by local bus to Rivas where you'll transfer to San Jorge ferry port by taxi (approximately 2.5 hours). Catch a 1-hour ferry across Lake Nicaragua (the largest in Central America and the tenth largest freshwater lake in the world) to the island of Ometepe, and head to your hotel. Hourglass-shaped Ometepe Island was formed by two volcanoes rising out of Lake Nicaragua (Ometepe literally means two volcanoes in the Nahuatl language) and the deep jungle is home to exotic wildlife such as monkeys and parrots. A great experience is to sit on the shore and watch fishermen return from a long day on the water with their catch.

Take advantage of a free day to discover the island. Perhaps take a hike up to the summit of either the Concepcion or Maderas volcanoes, but be warned, at 1700 and 1394 metres above sea level respectively, these are serious volcanoes and the treks are no walk in the park. You might prefer to splash around in the natural springs, soak up the sun on the shore or check out the island's petroglyphs (ancient rock carvings). If you like watermelon, coffee, banana and citrus fruits then Ometepe is the place for you, plantations abound, you’ll have loads of delicious fresh food to feast on. In the evening, head to Los Ramos, an indigenous community situated right in the middle of the island’s volcanos, for a cooking class. Learn traditional techniques used to make Nicaraguan dishes like nacatamales (a dough-based snack often filled with meat and steamed in banana leaves) before sitting down to a meal together.

Today you’ll take the two-hour journey (by ferry and public bus) to San Juan del Sur, a laidback surf town on Nicaragua’s south-west coast. Though the beach that lines the town’s horseshoe bay itself isn’t particularly great for swimming, you don’t need to travel far to find beautiful golden beaches with year-round waves. Go on an orientation walk with your leader and then enjoy free time to acquaint yourself with this fun little town. Tonight, you’ll be sleeping in style under the cover of a tepee! Connect with nature in these cosy dens and fall asleep to the sound of the ocean.

Enjoy a free day exploring San Juan del Sur’s colourful coastal scenery. If you’re feeling active, San Juan del Sur has plenty to offer. You might like to rent a surfboard and spend the day riding the waves at nearby beaches like Playa Maderas or Playa Marsella, alternatively, head south to La Flor beach reserve, where it’s possible to see olive ridley, hawksbill, leatherback and green sea turtles nesting between July and November. A huge statue of Christ (the largest in Central America) sits atop a cliff above the bay – why not hike to the top for spectacular views of the town and Pacific. In the evening, the city boasts a variety of greats bars and restaurants where you can share a meal with the group.

Say Adios to Nicaragua and continue your journey south to Costa Rica. Take a 1-hour bus to the border and then travel by private vehicle to Monteverde (approximately 5 hours). Monteverde was founded as an agricultural community in 1951 by a group of North American Quakers, these environmentally aware settlers also established a small wildlife sanctuary, which has since grown into the internationally renowned Monteverde Cloud Forest Biological Preserve. Cloud forests are similar to rainforests, but instead, draw their water from a semi-permanent cloud covering the region. Constant mist in the forest makes it feel a bit like a nightclub! But with less bass and more fresh air, this is truly a nature lover's paradise. More than 2000 plant species, 320 bird species and 100 mammal species call Montverde home – be sure to keep an eye out for the resplendent quetzal, one of the most elusive birds in the world.