Cities like Cairo can be dizzying, but your local leader and guides are there for a reason – they’ll have you heading straight for the best local spots.. Yep, the pyramids and Sphinx are awe-inspiring. But the smaller moments are special too – like kayaking on the Nile, dancing with Nubian locals and learning to spell your name in hieroglyphs.. Sleep under the stars (or in a comfortable tent) at a Bedouin-style camp in Wadi Rum. Only Petra’s Treasury is stunning enough to be the temple of the Holy Grail (well, according to Indiana Jones at least), and you’ll be blown away on a full day exploring the majesty and mystery of this world wonder.

From the Land of the Pharos to the land of the nomads, take a trip you’ll never forget through Egypt and Jordan. Lawrence of Arabia, Indiana Jones, Tutankhamen. These destinations attract the big names, and deservedly so. Cruise the Nile, haggle the Nubian Bazaar, see the Valley of the Kings, get lost in Petra and eat your weight in tabbouleh. 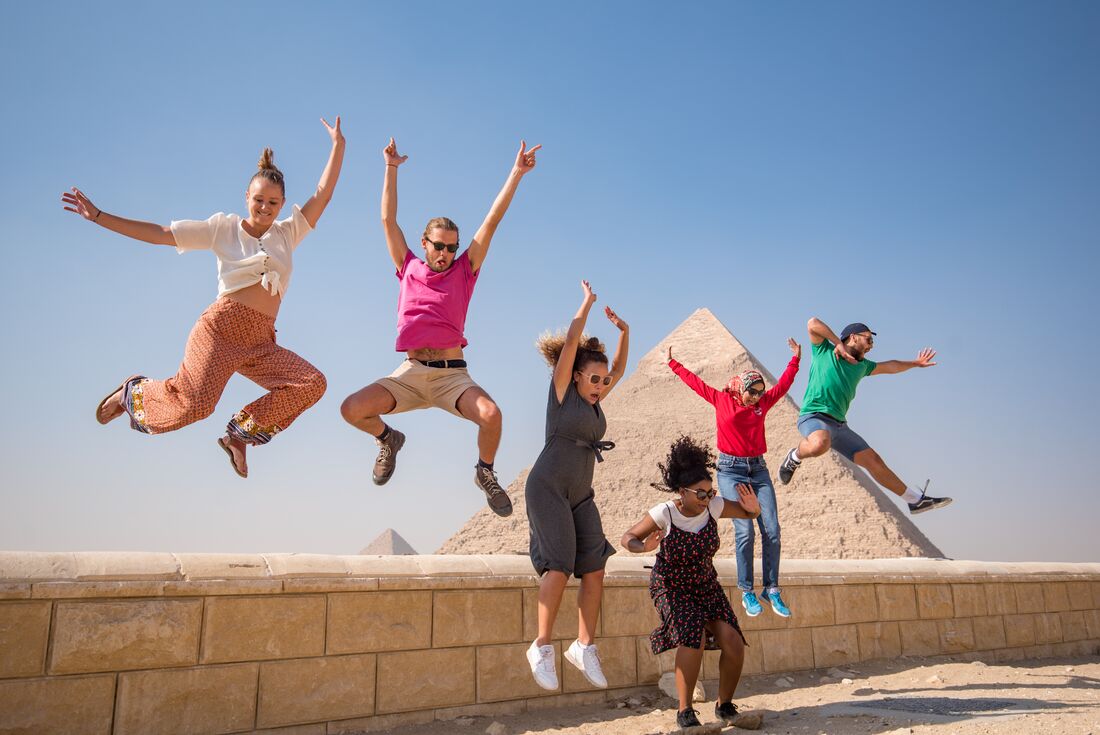 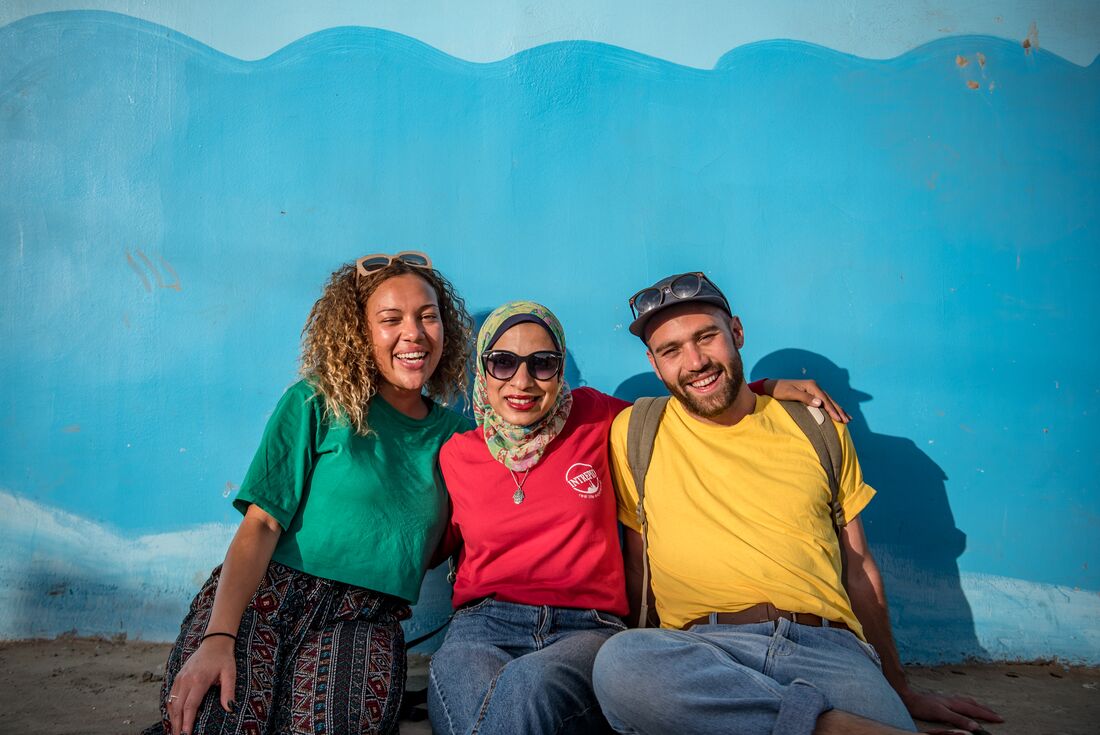 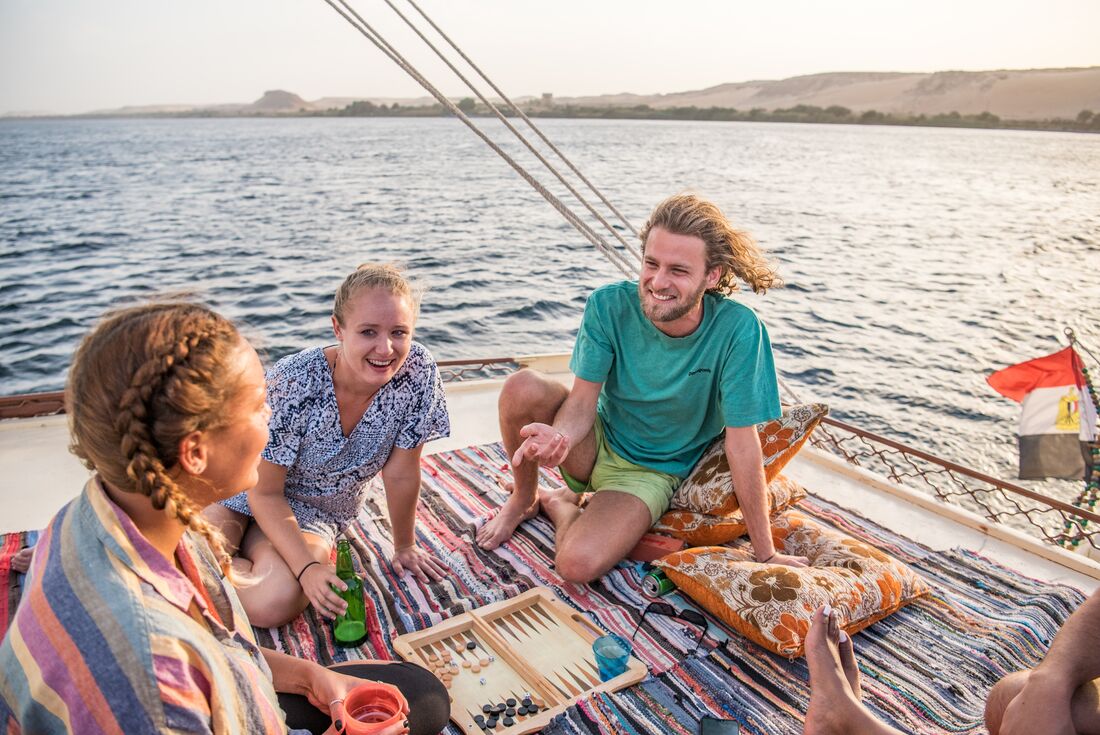 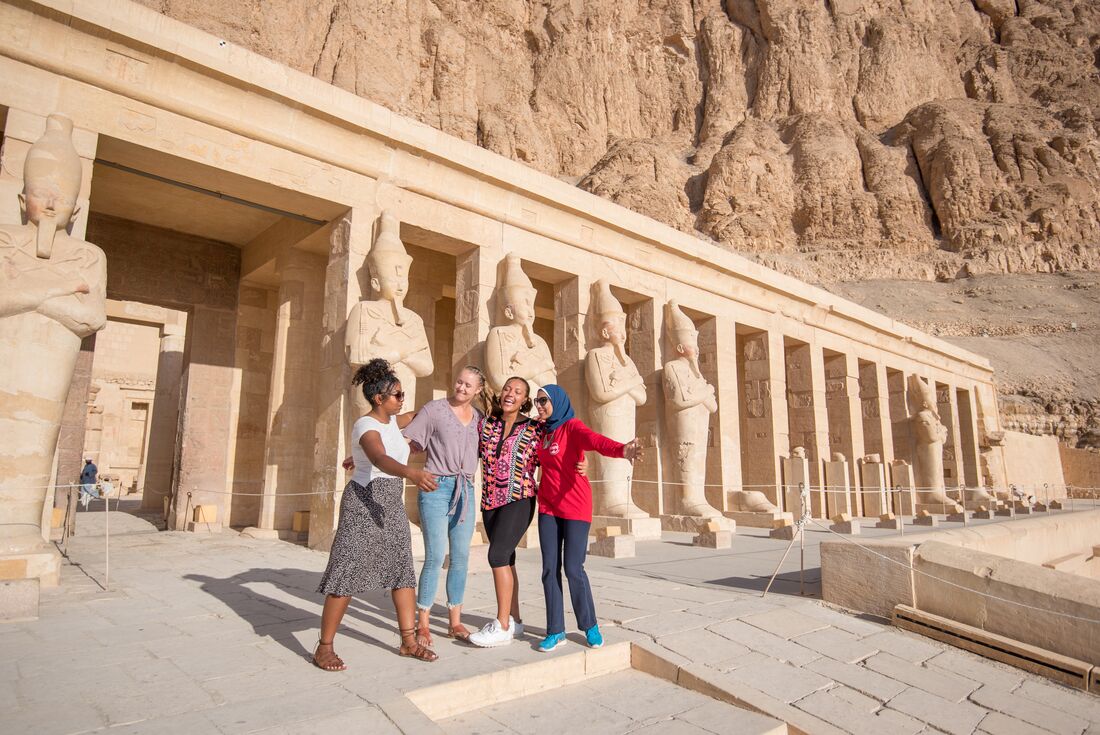 Welcome to Cairo! You will meet with your trip leader and the rest of your group at 6 pm this evening. If you arrive with time to spare before your tour begins, maybe go immerse yourself in the madness: grab a pair of authentic Roy Bunds sunnies from the bazaar, embrace the kitsch world of Dr Ragab's Pharaonic Village, or wash down the dust with a sahlab (sweet, hot custard drink with nuts). Be ready tonight to put your tastebuds into overload as you head out with your new travel buddies for some koshari where all the locals go.. downtown of course.  Koshari? think vegetarian Egyptian chilli, you may want a fresh lemon juice with that.

Today you'll take a trip to the Egyptian Museum to see the golden mask of none other than King Tutankhamun. Drive out to the edge of the desert and explore the Pyramids and the nearby Sphinx (nobody's quite sure how it lost its nose). A guy called Khufu was responsible for building the Great Pyramid. It’s 4500 years old, 146 metres tall and made from 2.3 million blocks weighing around 2.5 tons each. And how did they honour him? With a 9 cm tall statue. Bummer. Later there are plenty of options, like visiting the Valley Temple of King Khafre (Chephren). Just remember these will cost you extra. In the evening, it's time for your sleeper train to Aswan (Sleeper Train to Aswan sounds a bit like the title of an adventure novel, doesn't it? Just you wait).

Hit the bazaar this morning on a tour with your leader. Be prepared for friendly shouts of ‘welcome’ and ‘where are you from’ coming from the vendors. Visit an oil and perfume merchant to learn about how aromatic botanicals have been used in Egypt throughout the ages. From mummification to smelling pretty for a date, you’ll discover their myriad uses. Later, choose whether to join an optional tour to the Philae Temple Complex. A standout here is the Temple of Isis (the Goddess of health, marriage and wisdom) that was rescued from the rising waters of the Nile and relocated in the 1960s. In the afternoon, pop on a lifejacket and grab a paddle for the kayaking adventure of a lifetime as you navigate the Nile. For dinner, you’ve got the chance to head to a Nubian village and enjoy an included dinner with a local family.

This morning is yours to spend as you please in Aswan. If you can manage a (very) early start, the optional drive to Abu Simbel is well worth it. Cut out of a solid rock cliff, this temple’s a real winner as far as sightseeing in Egypt goes (and that is obviously saying a lot). Renting a minivan with your fellow travellers is the cheapest option. Remember, it takes 3 hours to drive there and 3 hours to drive back, plus you’ll want at least 2 hours to explore when you’re there. Back in Aswan the evening is free to check out the town.

Chill this morning before boarding your overnight felucca. A bit like a floating tent, a felucca is a traditional Egyptian vessel and the perfect way to explore the Nile. Later, take a stroll through a colourful Nubian village and discover what life is like for people living along the Nile. Depending on the group vibe, tonight might include a little beach party.

Disembark your fine felucca this morning. While your body might be crying out for a shower, there’s one more temple to see before heading to the hotel. Check out the Temple of Edfu, where inscriptions give insight into life during the Hellenistic period when the temple was built. Continue to Luxor, where you’re free to explore this open-air, museum-city on your own. Can we suggest Karnak as the first stop? Wandering through this ancient village is a cool way to get a sense of life here more than 3000 years ago (hint: religion was a big deal). Legend has it that is you walk around the granite scarab that is west of the Sacred Lake seven times, you’ll meet your soulmate.

Luxor / Valley of the Kings

We hope you missed being on the water, because today you’ll jump back on a boat to discover the West Bank. Check out three burial tombs in Valley of the Kings, with the option to pay for an exploration of the formerly lost tomb of Tutankhamun. Continue to the Colossi of Memnon, where two huge statues of Pharaoh Amenhotep III will have you pondering whether posting selfies to Instagram twice a day is really the height of narcissism. If your fellow travellers are up for it, you can choose to finish your West Bank adventure with an optional visit to the tomb of Hatshepsut. She became pharaoh when she married her half-brother, which wasn’t all that uncommon at the time.   If you’ve got any energy left, there will also be time to squeeze in a visit to Luxor Temple before your overnight train to Cairo.

Head south from Bab al-Futuh (one of three remaining gates from the Old City), walking past the old Islamic monuments that stand watch over the bazaars. Join in some good nature haggling at the Kahan-el Khalili bazaar, then head to El Fishawy. This ramshackle 240-year-old cafe is the perfect place for a cup of tea or a glass of cold water with lemon and mint. While there is nothing scheduled for tonight, we recommend heading into town as a group for one last bowl of koshari (pasta, rice and lentils).

Farewell Pharaohs with a flight from Egypt to Jordan. Touch down in main town – Amman. When you get here you'll meet your brand new leader and any fellow travellers joining the trip here in Jordan at a 6 pm welcome meeting tonight. Make sure you’ve got all your important docs and deets on you. You've got some time to wander around - you don’t know the meaning of ‘bustling labyrinth’ until you walk around the Jordanian capital. If it all gets too cray, duck into a cafe for a sweet mint tea. Make a beeline for Rainbow Street for a falafel and a sheesha. It's what the locals would want. Something more substantial? Maybe head to the Old Town’s Roman Amphitheatre, have a cultured afternoon at the Jordan National Gallery of Fine Arts, snap some pics of the city from the hilltop Temple of Hercules, or sweat it out in a Turkish bath house. Afterwards, rendezvous with your new Intrepid crew for a team catch-up. It may or may not be at the local pub.