Eat, swim, sunbake, repeat – that’s what will happen when you get cruising along Turkey’s Mediterranean coastline. The choice is yours if you’d like to go exploring, or just relax on deck.. Thought all the best Roman ruins were in Italy? Think again! Turkey is home to one of the best-preserved classical of Ephesus – so discover it just like Anthony and Cleopatra did 2000 years ago.. Take a group hike from the deserted ghost town of Karakoy over the hills to check out the stunning Blue Lagoon – your group leader will know all the spots to go to get the best vantage points.. Pay your respects of the battles fought and lives lost in Anzac Cove in Gallipoli. This once war-torn stretch of coastline is now a peaceful reminder of times past.

You’ll be hard-pressed finding a country that can provide all the goods of a cultural crusade – ancient ruins to explore, alluring beaches to swim at, local food to indulge in, lively cities to discover, and plenty of time to travel at your own pace. Get the essential low-down of everything Turkish on this 11-day cultural adventure from Istanbul, through the peaceful Gallipoli peninsula, acclaimed Ephesus, traditional Selcuk, seaside Fethiye through to attractive Antalya. With some south coast cruising, hot springs and ghost towns all thrown in, you’ll be seeing Turkey in a whole new light. 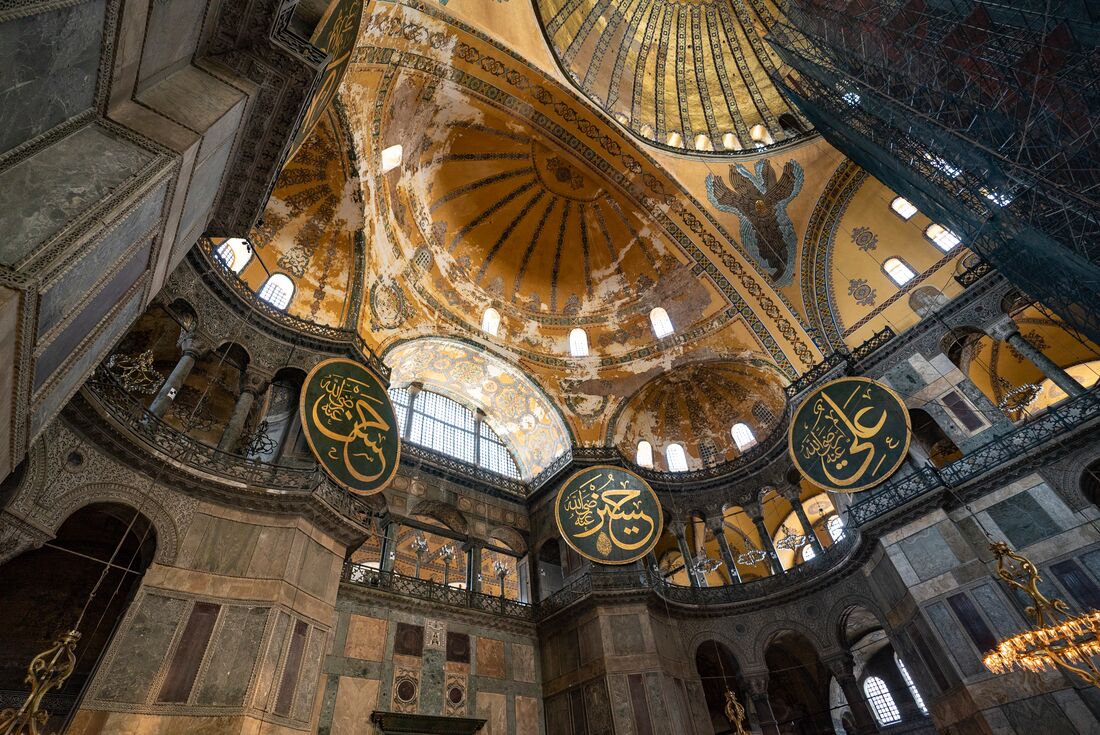 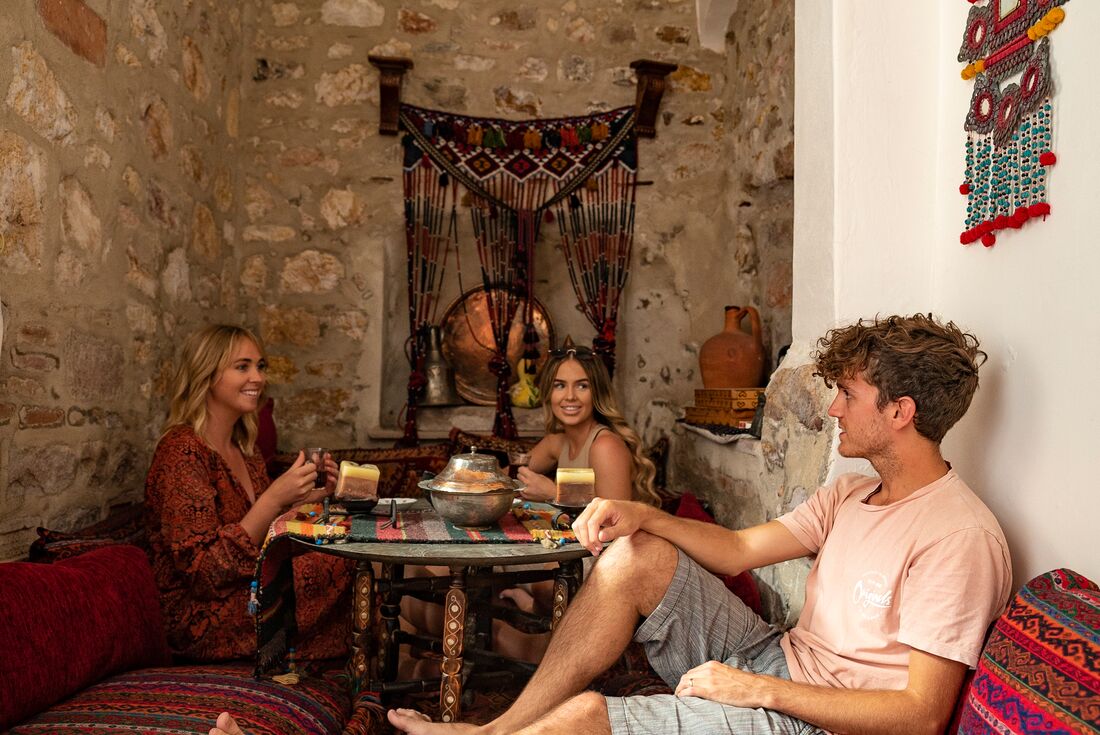 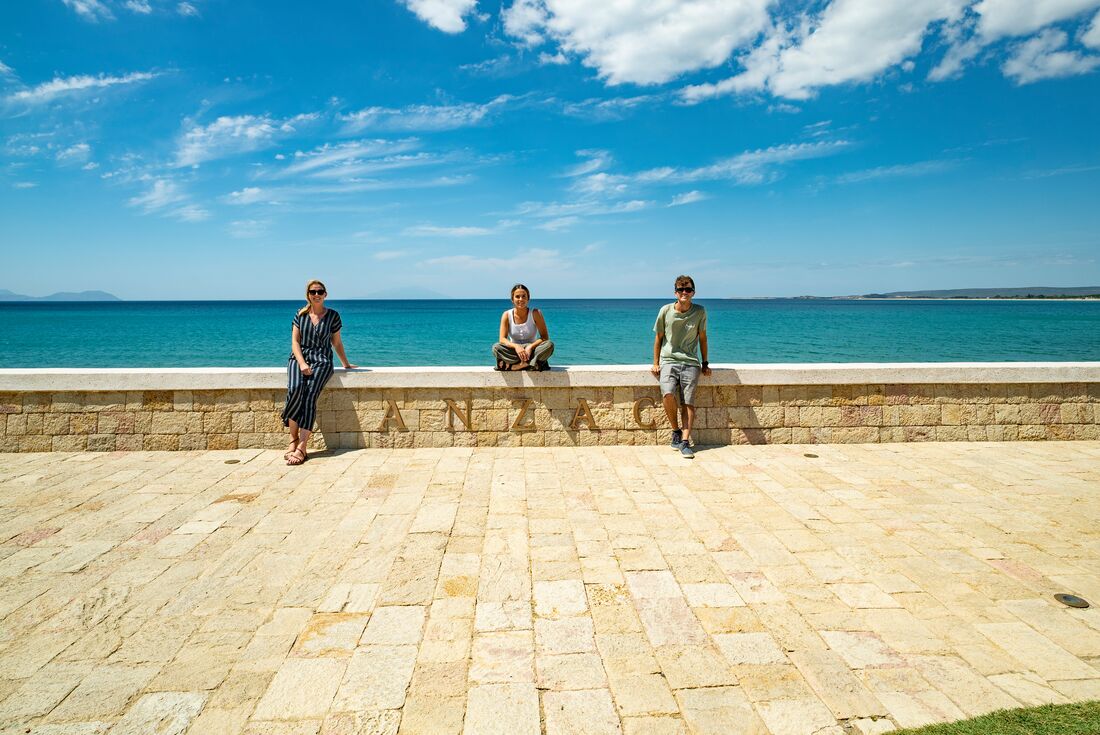 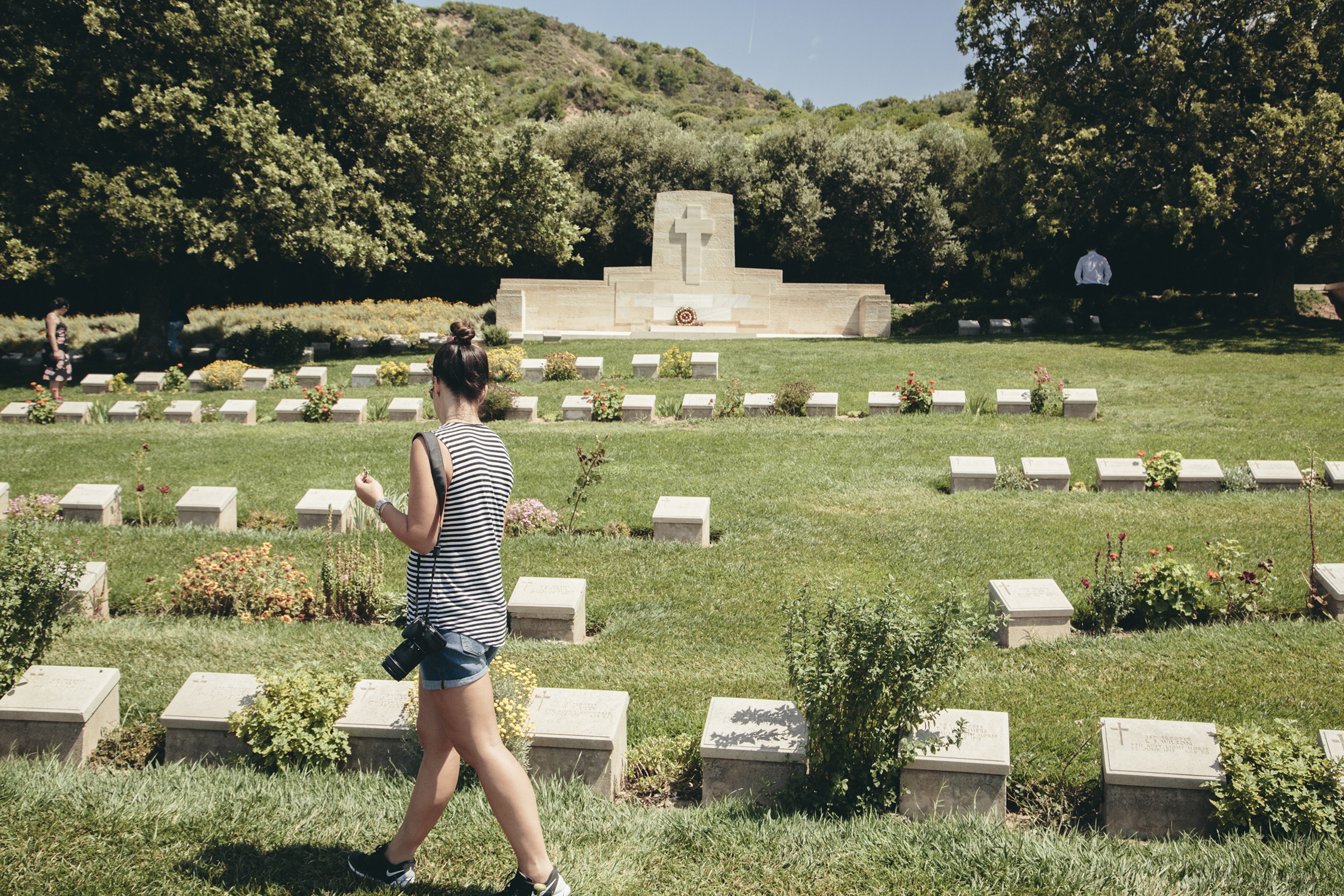 Kicks off your Turkish adventure in Istanbul – the continent-straddling metropolis that the Greeks, Romans, Byzantines, Ottomans, and now you – for one night, at least – have called home. You’ve got all of today to explore the capital city before you join up with your travel crew and group leader at an important welcome meeting at 6 pm. Until then, maybe get out into the city streets to see the Blue Mosque, Hippodrome, Grand Bazaar and stunning Aya Sofya. Your accommodation is right in the thick of the action, so you won’t have to walk far for your first kebab. After the meeting, why not head out on an optional group dinner – a good introduction to some fabulous Turkish cuisine is in a street-side cafe.

Today you’ll take a bus to the shores of Gallipoli (approximately 5.5 hours) – a significant peninsula for Australians and New Zealanders. It is a spot of pilgrimage for many to see the now calm waters and peaceful landscape that reside where such brutal battle took place during the First World War. Take in the reverence and serenity of the region, and hear stories of heroism and mateship that shone through the tragedies of war. Continue onwards to Canakkale where you’ll spend the night. This city has young local vibe due to it being a popular university town, so chill on the edge of the Dardanelles with a drink or check out a local band with some of your travel pals.

Today, there's the option this morning to take an excursion out to the ruins of Troy, where you can explore the ancient walls, climb around the 4500-year-old ruins, check out the Trojan horse statue and gaze across the Troad (the Plains of Troy) towards the Dardanelles and the hills of the Gallipoli Peninsula. Later on, drive down the coast to Ayvalik (approximately 3.5 hours). Head on a leader-led orientation tour to discover a town that’s a fascinating mix of Greek and Turkish cultures. Check out the cobblestone backstreets, beautiful houses and lively cafes. You could also hop on a boat from Ayvalik to Cunda Island, which is filled with Greek Orthodox churches and known for its dairy farming. The town is set around a harbour and looks out to the Aegean Islands, so what better way to kick of the evening then with a drink at a harbour-side bar, eating a local Ayvalik tost – think a Turkish-style toasted sandwich with all the trimmings.

This morning, take a 4-hour journey by local bus to the traditional farming village of Selcuk. Once arrived, take an orientation walk to get your bearings – a town full of history and packed with artefacts and relics that reflect its past as an ancient fortress on. Later you can head out to the nearby ruins of Ephesus and explore the streets once walked by Marc Anthony and Cleopatra. This is one of the best-preserved Greco-Roman classical cities in the world. You’ll be amazed by the sophistication of this ancient city, which had running water, public toilets, in-house heating, a medical institute, a brothel and Roman baths. The theatre is also well preserved, but it’s the magnificent library that’s perhaps the coolest structure. Nearby are the remains of the Temple of Artemis – one of the Seven Wonders of the Ancient World. Chill out tonight in Selcuk, where you could try some Turkish meze and raki for dinner with some of your travel crew.

Travel east inland to Pamukkale (approximately 4 hours), which literally translates to 'cotton castle'. Here, spectacular natural hot springs with a high calcium content cascade over the edge of the cliffs, leaving bright white terraces, or ‘cotton’. It's been used as a spa since the second century BC, and its waters are said to have heaps of healing properties. If you’ve got Cleopatra on the mind after yesterday’s stories, then maybe choose to head out to the ancient city of Hierapolis and take a dip in what used to be her old pool – the transparent water-filled springs sculpted as a gift from Marc to Cleo. You can also check out the other ruins of the city – Hierapolis is known for its abundance of temples and religious structures, and the amphitheatre shouldn’t be missed.

Jump on a local bus bound for Fethiye (approximately 3.5 hours). Arrive in time to check out this seriously vibrant harbourside city, and if there’s time, catch a dolmus to Saklikent Gorge or explore the back streets of the Old Town of Fethiye and hunt for a bargain. The best thing is – you’ve got the power to decide. Tonight, enjoy a walk by the harbour with your group, try some local seafood and check out the thriving nightlife scene.

This morning, travel to the eerie ghost town of Kayakoy. Wander through deserted stone houses and through the overgrown countryside, and be sure to watch out for the goats. You’ll be setting off on a hike today, so make sure you’re wearing some good shoes. From Kayakoy, continue by foot over the hills to catch a glimpse of the amazing Blue Lagoon in Oludeniz. Once arrived in town, hang out for a bit, quench your thirst and take a swim in the sparkling Mediterranean before jumping back on a local bus and heading to your place to stay tonight. Cast your eye out to some pretty scenic surroundings tonight, out over Butterfly Valley and a perfect place to watch the sun set over the ocean. Chill out and enjoy an included dinner in Faralya.

This morning you’ll take a local bus to Kas (approximately 3 hours), which is right near the southernmost point of Turkey. With its whitewashed buildings covered in bougainvillea and cobbled streets, Kas is one of the most attractive towns on the Turkish Mediterranean Coast. Spend an hour or two lunching and wandering the streets, before you transfer an hour down the road to Kekova. At about 6 pm, you’ll board your ship and make waves on a memorable voyage along the coast. The next couple of days will be spent swimming, exploring sunken cities, sunbaking and eating fresh seafood. This evening, cruise to Tersane Bay for a swim and then enjoy a home-cooked dinner on board, before docking for the night and sleeping under a blanket of Mediterranean stars.

Wake up to a spectacular Mediterranean sunrise this morning and enjoy a hearty breakfast on board. Cruise onwards to the sunken Lycian city of Simena, from where remains of a mysterious civilisation can be viewed, as earthquakes sunk this land almost 2500 years ago. Here you can walk up to nearby Simena Castle, swim in crystal-clear waters, or explore Lycian rock-tombs. More swimming, sunbaking, eating and repeating – cruising the Turkish coast is a dream. Spend another memorable evening on the boat, sleeping under the stars if you’d like.

Soak up the last of life as a glamorous boat-dweller with breakfast on board. Then transfer by public bus approximately 3.5 hours to Antalya – the capital of the Turkish Mediterranean. It’s hard to get a bad photo of Antalya due to it charming cobblestone streets, historic Old City, vibrant marina and the Taurus Mountains framing the city. Head around town with your group leader, jump on the old Nostalgic Tram or go to Konyaalti Beach for some more time chilling out beachside. If you are in the mood for some last-minute history, check out some of the best museums in the country, or get theatrical at Aspendos ancient city with a beautiful, intact theatre from Roman times. Tonight, why stake out some food and shisha with your travel crew – Antalya has a thriving nightlife scene, so use it to your advantage.

With no activities planned for today, you are free to leave the accommodation at any time after breakfast, provided you comply with your accommodation’s internal check-out times.