Get into the ancient and modern sides of Jordan, Israel & The Palestinian Territories with your enthusiastic and extremely knowledgeable local leader, who’ll be heaps of fun too. This trip’s got it all. History? How about 11,000 years of it. Culture? Oh, just incredible architecture, food and music. Scenery? City, beach and the desert. What more could you want?!. Only Petra’s Treasury is stunning enough to be the temple of the Holy Grail (well, according to Indiana Jones at least), and you’ll be blown away on a full day exploring the majesty and mystery of this endors. Graffiti has filled the walls in Bethlehem by many artists over the years, including British Artist Banksy. Check it out on a walking tour with your leader

If you’re looking for travel that will really surprise and inspire you, look no further than Jordan, Israel and the Palestinian Territories. Get amongst the cafe culture in Amman, set up camp under the stars in the Wadi Rum desert, and get blown away by ancient buildings carved into the pink mountains of Petra. Along the way you’ll have a leader showing you the ropes and helping you navigate manners and etiquette. For example: in a traditional Bedouin coffee ceremony you’ll actually drink three cups of coffee: one for the soul, one for the sword and one because you’re a guest. Don’t ask for a fourth – it’s greedy and you might wet your pants on the bus. 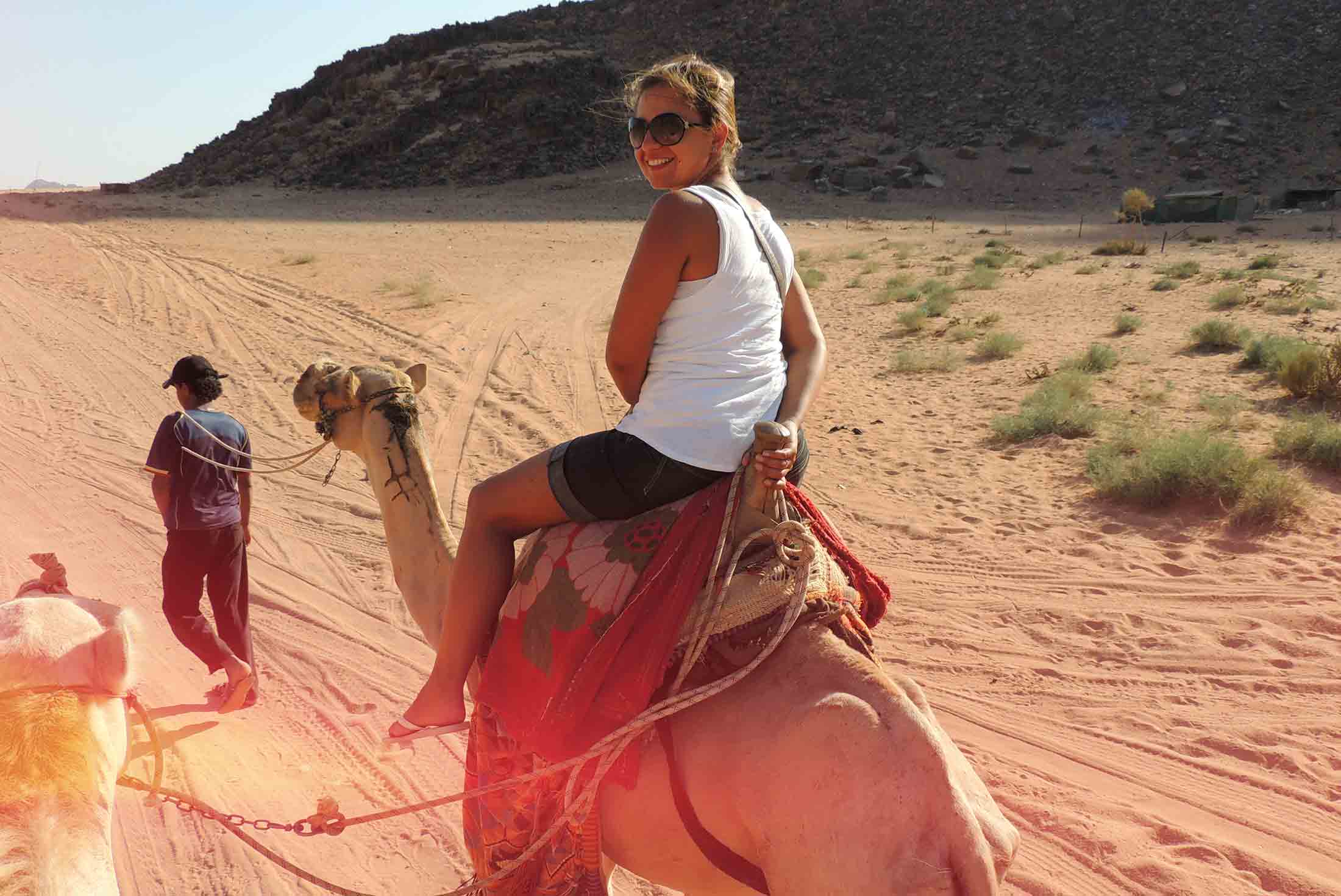 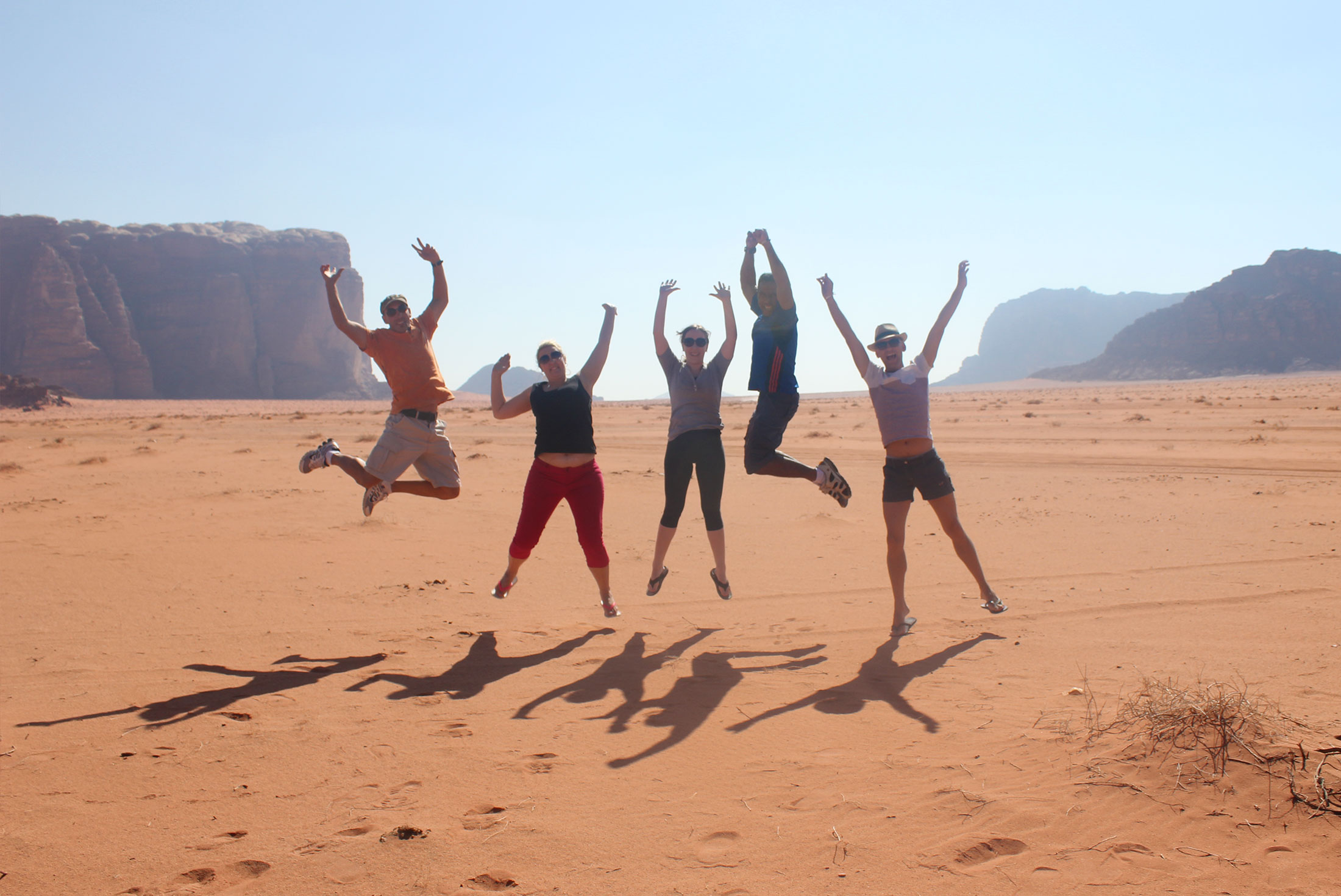 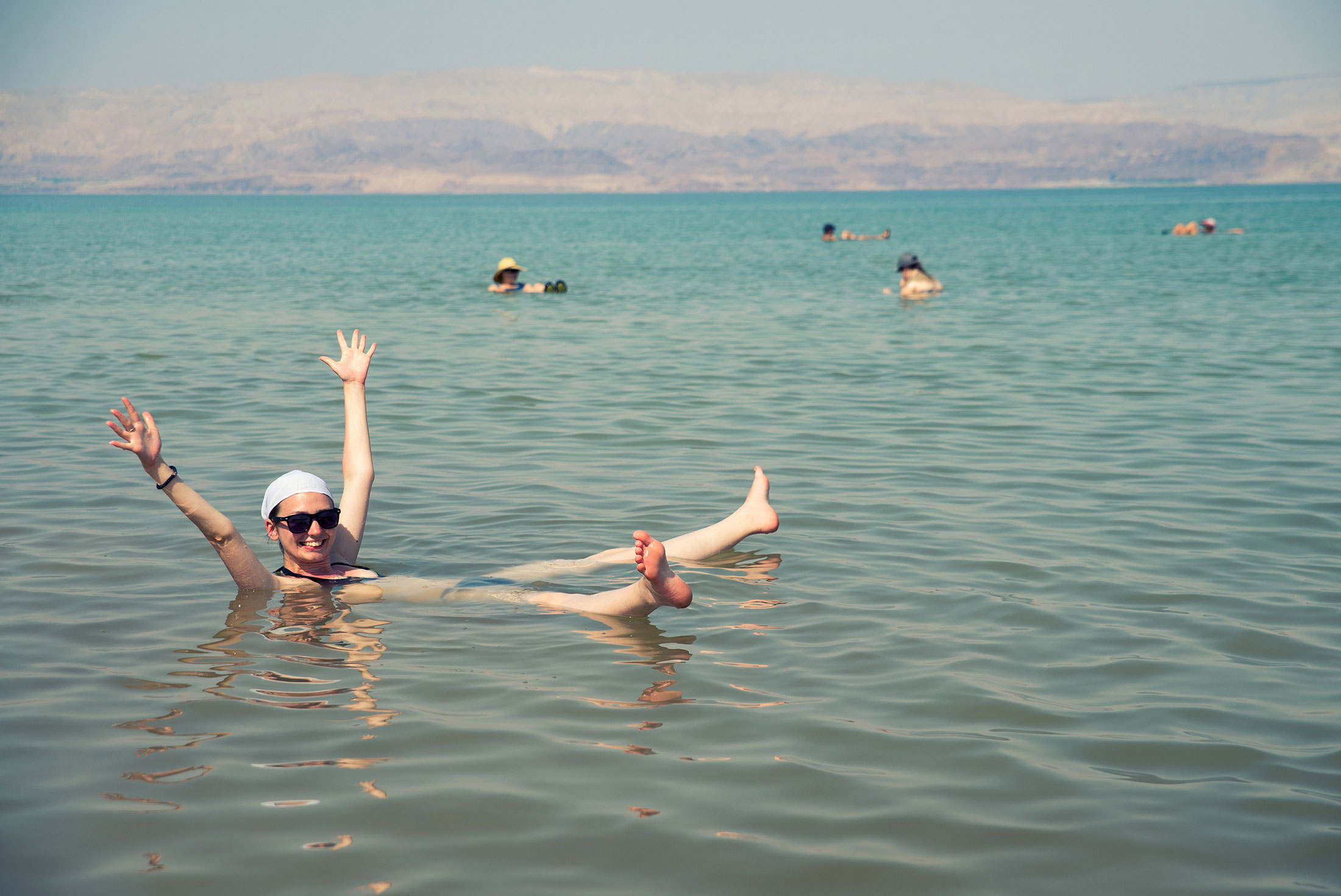 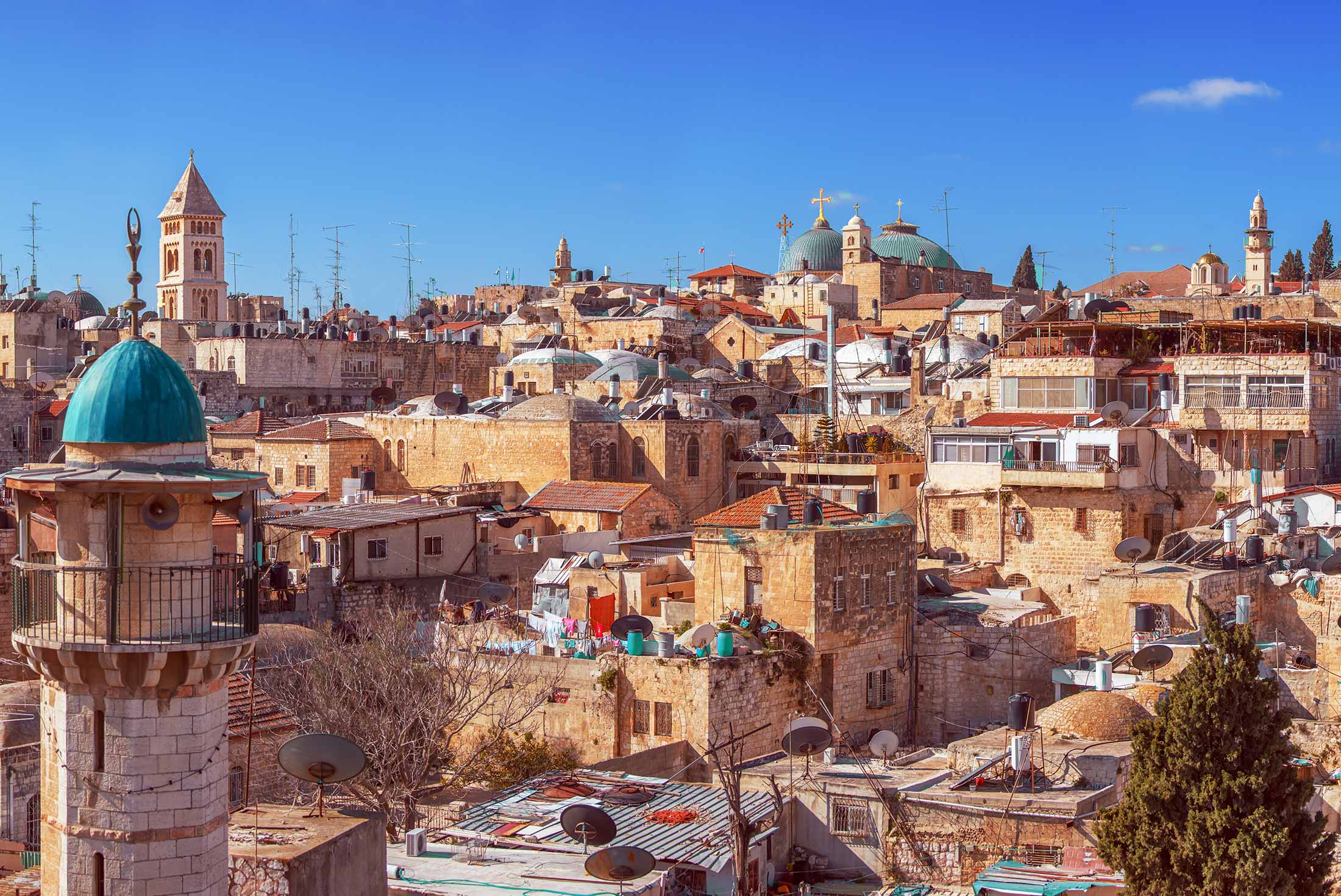 Welcome to the Middle East! Touch down in Jordan's main city: Amman. Meet up with your leader and crew at an important welcome meeting at 6 pm tonight, but until then, you’re free to hit the streets. Why not a beeline for Rainbow Street for a falafel and a sheesha – it’s what the locals do. Something more substantial? Maybe head to the Old Town’s Roman Amphitheatre, have a cultured afternoon at the Jordan National Gallery of Fine Arts, snap some pics of the city from the hilltop Temple of Hercules, or sweat it out in a Turkish bath house. After your welcome meeting, you should get a group together and head out for the night – your leader will know of some spots to go.

You’ve got another day to explore the majestic Petra, and the best thing is you’re free to do as you please. Perhaps walk the road to Al Khanzneh (The Treasury) – one of the most stunning temples of the whole site. Or, if you didn’t make it yesterday, head up the stairs to El Dier (the Monastery). Other great options today are to hike to the royal tombs or visit the incredible Byzantine mosaics. Your leader will know all the good things to do, so ask them for help with arranging these.

This morning after breakfast, head away from Petra and drive down the King’s Highway towards Madaba. You’ll stop to check out the renowned Dead Sea and have a swim in these salty waters. If you’re feeling a bit sore and weary after your Petra expedition, do not fear, as the Dead Sea’s mud has known healing properties and will be sure to bring back your youthful good looks. Afterwards, swing past Mt Nebo and view the Promised Land, just like Moses did. Arrive in Madaba – the city of mosaics – and take a leader-led walking tour to get your bearings of the city. Included this afternoon is a visit to St Georges Church where you’ll see the intricate mosaic map, containing the oldest surviving cartographic depiction of the Holy Land and Jerusalem. Later on, perhaps head out tonight with the gang for dinner – there are some awesome places to eat in this city; your leader knows where to go.

This morning your private transfer will collect you for the 1.5 hour journey to the Allenby Bridge Border Crossing. Here you will make the crossing into Israel. Please be aware that you will cross the border unaccompanied. There will be a transfer driver waiting to collect you for the 1 hour journey to Jerusalem. Shalom! Welcome to Jerusalem, Israel. On arrival to your hostel there will be a welcome note waiting for you. Meet your leader at the hostel at 4.30 pm .After your meeting finishes head out on an orientation walk up to the very cool Machane Yehuda Market. Here you can sample tasty local eats using your bite card at any of the vendors. Your leader will leave you here so you can kick-on after dark. We recommend grabbing a beer in one of the many laneway bars and watch the market come to life in the evening, bar hop, or go for a wander to check out the amazing graffiti popping up on shop shutters.

This morning drive to Jaffa Gate where you will start a walking tour of the Old City from above and below! Start with the Ramparts Walk from Jaffa Gate all the way to Herod’s Gate. This will take about 45 minutes. Go down at Herod’s Gate and walk along the Via Dolorosa (Stations of the Cross), stopping at the Austrian Hospice for a short break and go up to the rooftop for a view of the Old City, before continuing to the Church of the Holy Sepulchre. Walk to the Wailing (Western) Wall stopping at the 'Cardo' in the recently restored Jewish Quarter. The rest of the afternoon is free for you to do as you please.

Rise and shine nice and early (approximately 5 am) to drive out to the spectacular cliff-top fortress of Masada, near the Dead Sea. Kick off the day with an early morning hike up the Masada Snake Path which winds its way up approximately 400 meters from the lowest point on earth (The Dead Sea) to the Peak. This UNESCO site is super important to the Jewish people, a symbol of their exile from the Holy Land and of bravery and self-sacrifice. The story goes that here a Jewish sect called the zealots held out against the Roman army in AD66. Rather than surrender, they either fought to the death or committed suicide, every last man, woman and child. Catch the Cable Car back down then drive to the Dead Sea for a float in the salty waters. Apparently, Cleopatra used products from the area as part of her beauty regime, which also allegedly included animal milk and almond extract! After soaking in the salty waters, transfer back to your hostel in Jerusalem for a free evening.

This morning, check out of your hostel and head to the Mount of Olives for a panoramic view of the Old City. From there, drive to Bethlehem – no doubt you're familiar with it from all the Christmas carols and nativity plays. Drop by the Church of the Nativity, built on where it is said Jesus was born, and also head to the Shepherd’s Fields, where the angels appeared to bring the good news. You’ll also have time to explore the graffiti walls that have been added across the years, including by Banksy. Learn the personal stories behind some of the more prominent pieces. Afterwards, continue on to Tel Aviv via the ancient port city of Jaffa, the basis of modern Tel Aviv. Once checked-in to your hostel, join a sunset bike ride (approximately 2 hours) to get acquainted with this vibrant seaside city. Tonight, why not get the gang together and hit the town this evening – Tel Aviv is known for its happening nightlife scene.

There aren’t any activities planned for today, so you’re free to leave the hostel at any time. That doesn’t mean your Middle Eastern adventure has to come to an end! If you’re looking at spending more time in Tel Aviv, we don’t blame you. We’ll be happy to organise additional accommodation (subject to availability).