Experience the tropical lifestyle of Honolulu for yourself and get some surf lessons on one of the world’s most famous coastlines: Waikiki Beach.. Take a group driving tour to Oahu’s North Shore, past rugged mountains, winding coastlines and gnarly surf breaks.. Take the once-in-a-lifetime opportunity to swim with manta rays and marine life at sunset as an optional but highly recommended activity.. Get your hiking shoes on and visit Papakolea Green Sand Beach – one of only four of its kind in the world, and situated near the southern most point in the United States!

When you think of Hawaii, you might imagine a sun-drenched paradise full of sandy beaches, picturesque coastlines and laidback surfer types. You’d be right. The Essential Hawaii tour will let you explore all the hotspots of America’s archipelago state and, at the same time, relax into island life. Become one with the vibe of Waikiki beach, hike past spectacular craters, stroll on green sand beaches and experience the underwater world of beautiful marine life on your 9-day island-hopping adventure. From the buzz of Oahu’s North Shore to the prehistoric wonder of the Big Island, to the relaxed mood of Maui – say aloha to Hawaii and an unforgettable adventure. 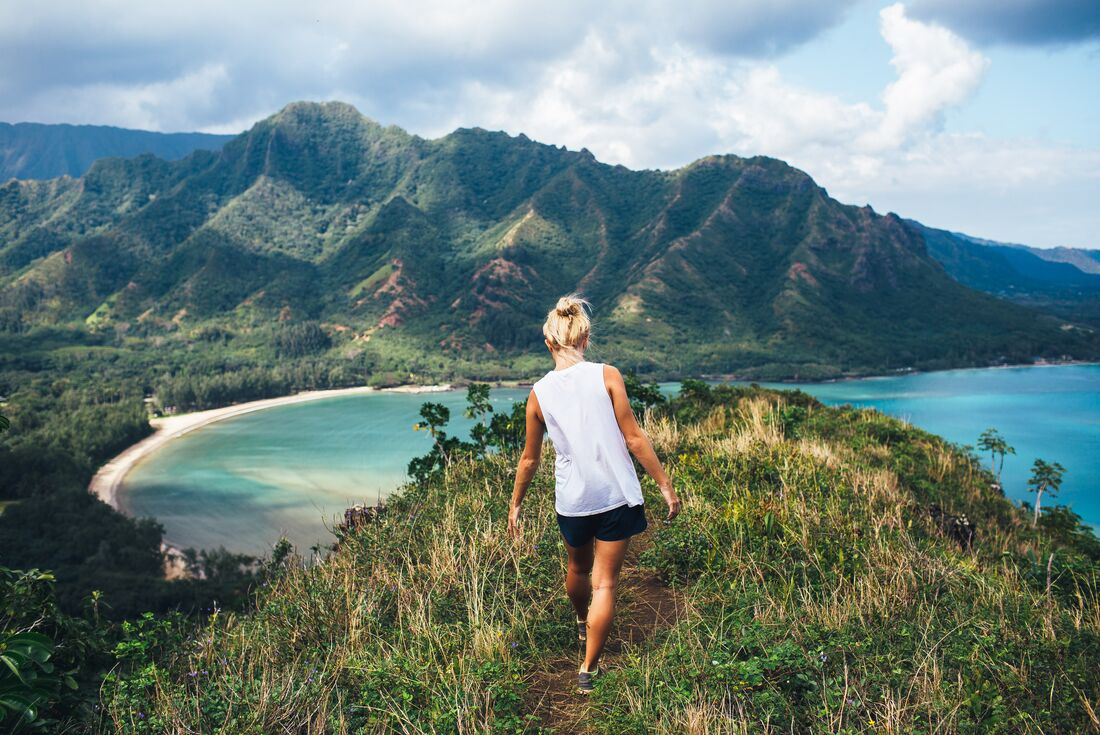 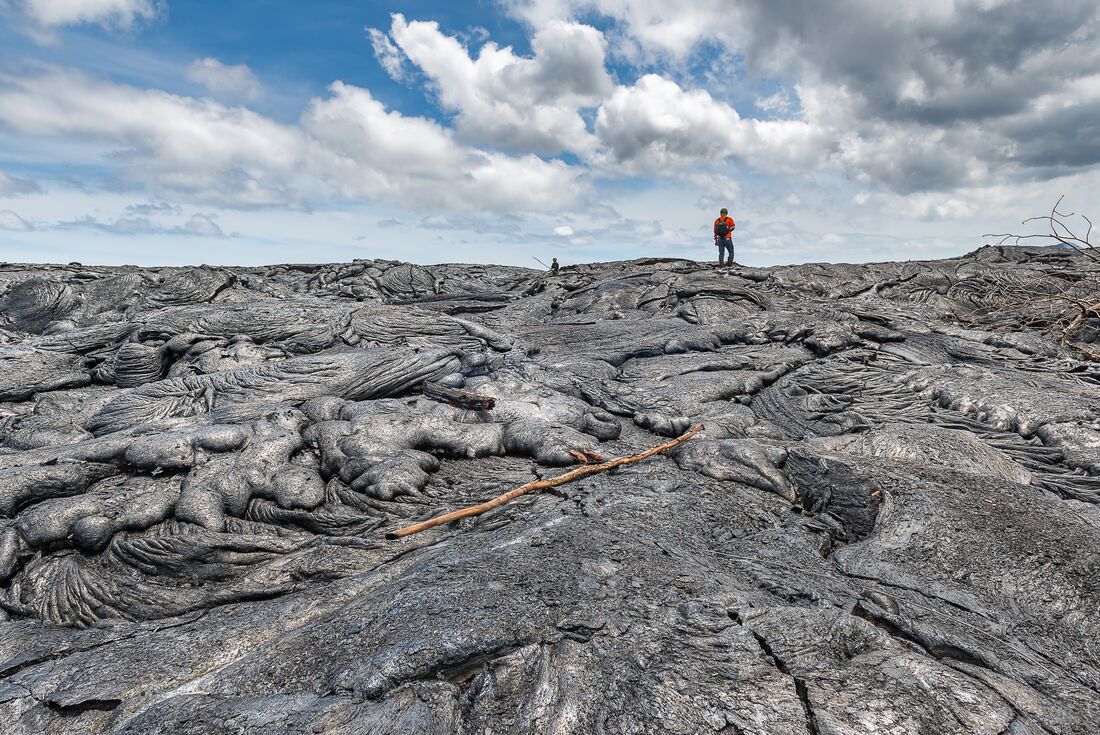 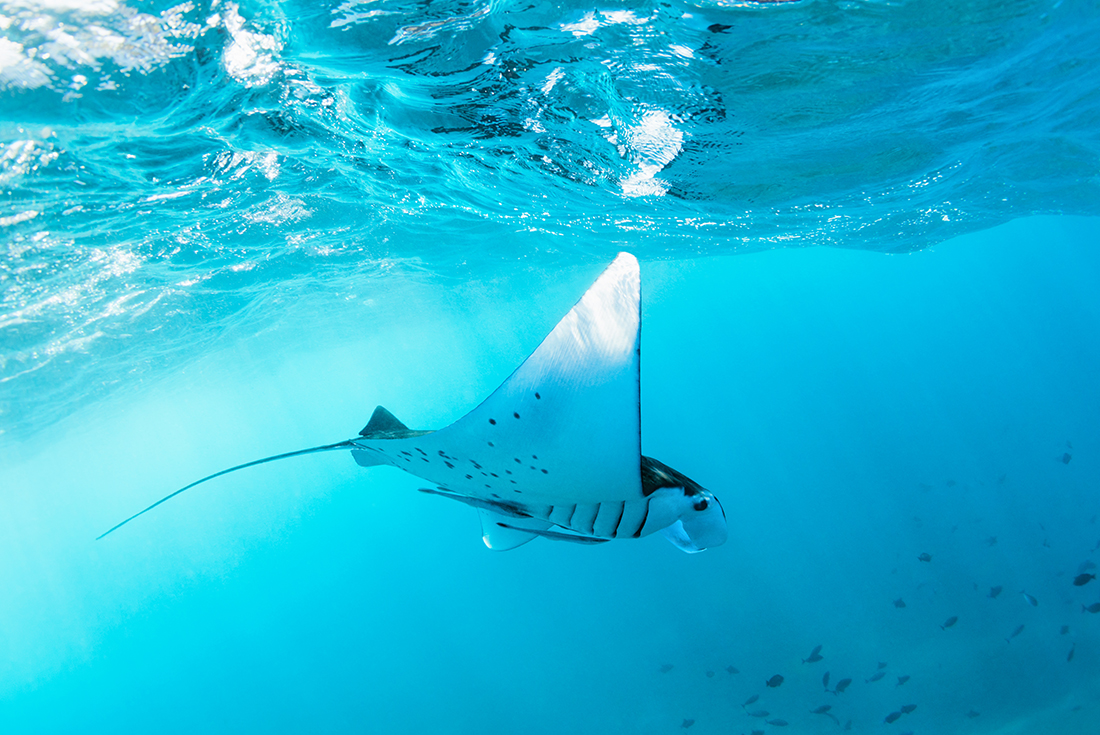 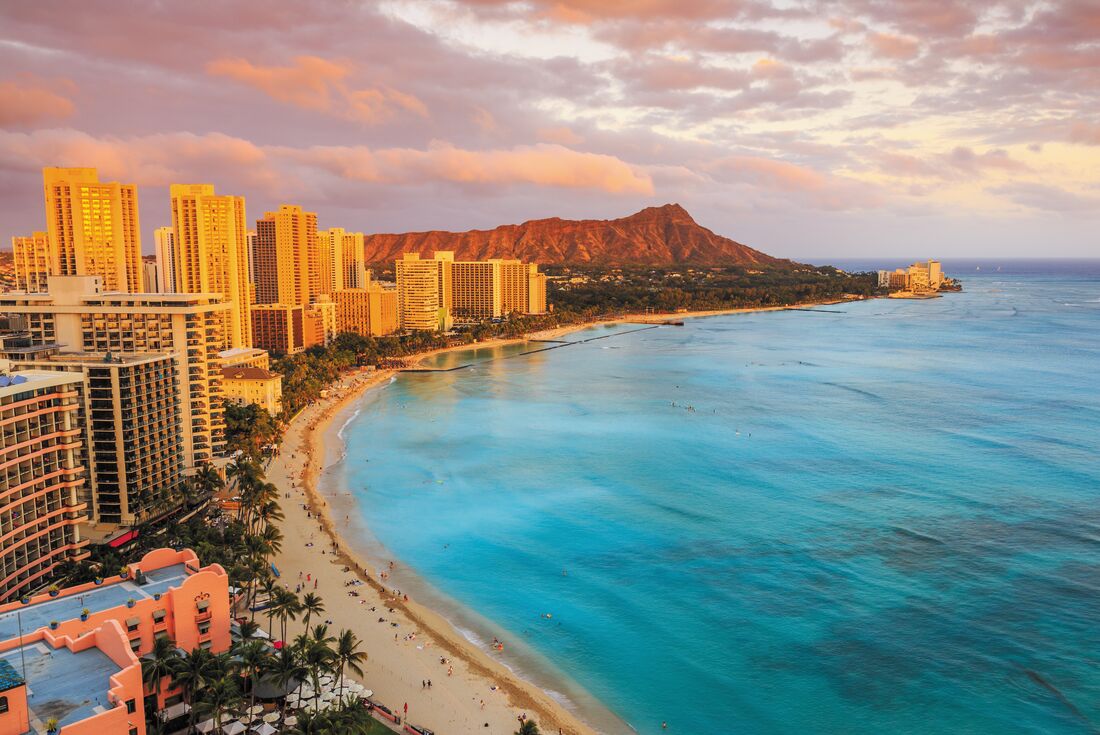 Aloha! Welcome to tropical Hawaii. Your adventure begins in Honolulu, the capital of the most populated island Oahu. Meet your group leader and fellow travellers at a welcome meeting at 3 pm at your hostel. If you do arrive early (recommended), there is a heap to do in Honolulu and surrounds. Spend the day checking out Waikiki, where you could hire a surfboard and take some lessons, soak up the sun on its famous shores, or check out the range of restaurants and outlet malls on offer. A little bit further out of town is Pearl Harbor, where you can learn about the beginning of America’s involvement in World War II with a tour of the Memorial and Museum. At night, head for a group sunset walk on the Diamond Head Crater trail – an extinct volcano with panoramic views of the iconic bay. Take a break at the top to watch day turn to night and the glistening waves shape, roll and break over the shoreline.

The day begins with a visit to Hanauma Bay, a nature reserve and snorkelling destination ideal for underwater exploration, a spot of swimming or simply admiring the views of white sand and crystal-clear water. Your group leader will then lead a driving tour to the North Shore of Oahu (yes, the one with world-class surf breaks, sandy beaches and the laidback Hawaiian vibe you’ve been yearning for). There will be time to stop at different lookouts along the way and scout some of the various movie locations dotted along the coastline, plus indulge in some delicious food truck eats. Grab a shaved ice and watch the planet’s best surfers search for some epic waves again and again.

Fly to Kailua-Kona on the island of Hawaii. A lesser-known fact is that the Big Island of the Hawaiian archipelago, home to the Kilauea Volcano, is also named Hawaii! The town of Kona, as the locals call it, is a lively town on the west coast of the island. Your day is free to explore Kona and its surrounds. You have the option at night to attend a traditional luau, full of Hawaiian food and vibrant dancing – a highly recommended activity and definitely a fun experience to have at least once in your visit.

Take the opportunity with a free day to explore some of the stunning beaches (some with black sand) and clear lagoons on Hawaii. Your group leader will be able to direct you to a hidden cove or secret lagoon, so maybe pack a picnic, take your snorkelling gear and set off on an underwater expedition to spot sea turtles and tropical fish. For a once-in-a-lifetime experience, think about booking a night snorkel with manta rays. The underwater ecosystem comes to life under beams of light streaming from the surface, and with the rays circling, you have the opportunity to get up close and personal with these flat, UFO-like marine creatures.

Leave Kona today and head to the Hawaii Volcanoes National Park on the southern side of the island. On the way, you’ll stop at Pu'uhonua O Honaunau National Historic Park, where you can learn about the ancient Hawaiian belief system of kapu: a code of conduct that underpins traditional island life. Then, put on your hiking shoes to experience one of only four green sand beaches in the world: Papakolea Green Sand Beach.

Today is the day to hike sections of the mighty Hawaiian volcano, Kilauea. After breakfast, head out to explore the park with your leader. The first stop will be a park ranger talk at the Kilauea Visitor Centre. The group leader will then take you on a driving tour, and along the way there are plenty of times to stop and take a hike, from brief trails through lava tunnels to longer hikes across an actual crater. Seeing glowing lava was once the main attraction, but since Kilauea Volcano’s eruption in May 2018, a visit to the Kilauea Caldera and Halema’uma’u Crater will give you an understanding of how the landscape of the Big Island is constantly being shaped by these regular eruptions.

After leaving the Big Island, fly to the paradise that is Maui and arrive in Kahului. Using this as the base, you’ll have time to explore the island and plenty of opportunity to relax on one of Maui’s beautiful beaches. If adventure is on the agenda, head out of town to Pe’ahi, where monster waves (not for the faint-hearted) often occur, and you’ll understand why this break deserves its name: Jaws.

Hit the road on a Road to Hana driving tour. Hana is a region on the eastern shore of Maui, considered one of the last unspoiled Hawaiian frontiers. This is a full day activity but there is a lot to see and do along the way, and even though it is a relatively short driving distance, the narrow one-lane bridges and hairpin turns along the coast lend themselves to cruisy driving because of the stunning views. Think waterfalls, bamboo forests, lava tubes, and dense rainforest meeting the ocean at colourful sandy beaches.

Say a big mahalo (thank you) to the group leader as there are no activities planned on this day. If you’re wanting to stay in Maui, now is a perfect opportunity to go on any optional activities that take your fancy. Perhaps head to Haleakala National Park to its dormant volcano early in the morning to witness spectacular sunrise views, or (season depending) consider a whale watching adventure to see the humpback giants up close. Otherwise, pull up a towel on one of the many beaches and soak in the Hawaiian sun.