Enjoy the full experience of surprising Ashgabat, exploring this marbled city that was largely rebuilt following a destructive earthquake in earthquake in 1948.. Traverse across the country on an overnight train journey in twin share cabins from Ashgabat to Dashoguz.. Explore sprawling Silk Road ruins of Mary, Merv and others with a local guide – testaments to the once grand empires that ruled these lands.. Watch the sun set over the surreal flames of the Darvaza Crater with a night camping in the desert.

Discover the ancient ruins, endless sands and mythical haunts of isolated Turkmenistan, a country that is largely ignored by travellers. Journey through the prehistoric towns that dot the Silk Road and encounter humble and hospitable people along the way. From the marbled metropolis of Ashgabat to the tiny desert community of Yerbent, this ten-day adventure is a fantastic introduction to this mysterious country. 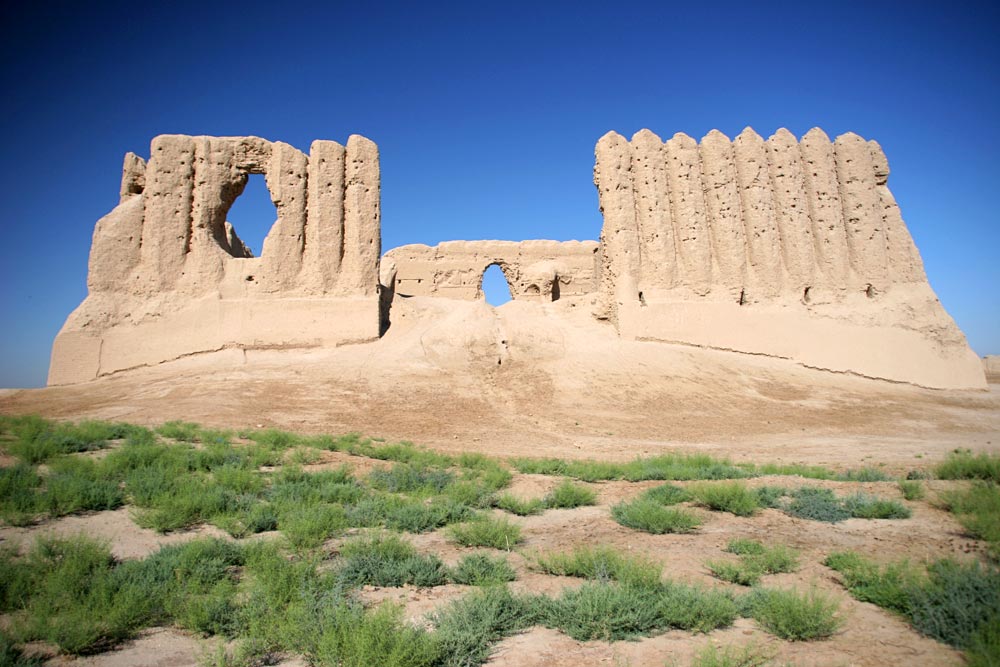 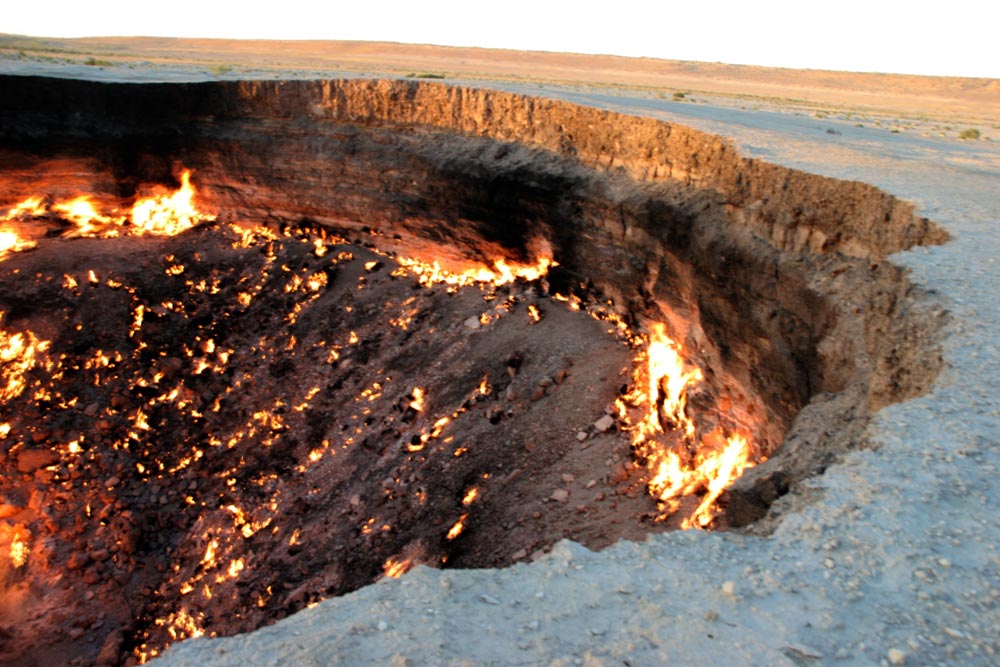 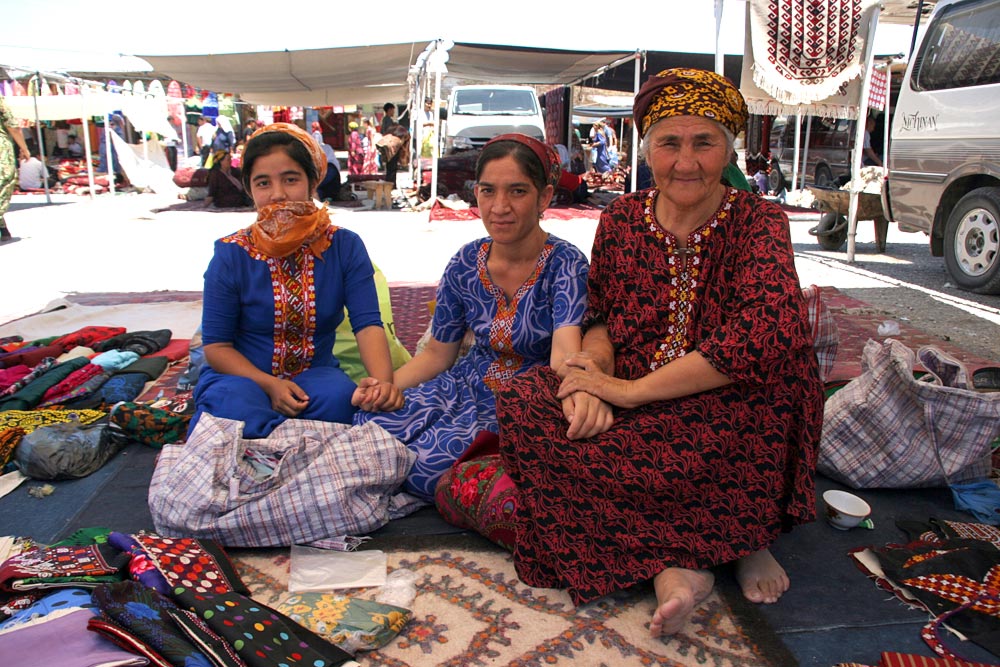 Welcome to grandiose, monument-rich Ashgabat! On arrival you will be transferred to your hotel. You may check in anytime after 2 pm, but you journey truly begins with a welcome meeting at 6 pm. Here you will meet your leaders, fellow travellers and hand over the details of your insurance and next of kin. Join your group for an optional dinner tonight.

Begin your day with a tour of this unique city. Extensively rebuilt since the country gained independence 25 years ago, little is left of the original Russian Imperial city, as most of it was destroyed in a massive earthquake in 1948. Today the centre is a mix of futuristic and outrageous public buildings that are an extraordinary sight. You will take a short tour of some of the main sights, including the Independence Monument and Neutrality Square, with its three-legged arch (locally known as 'The Tripod'). This is the foremost monument dedicated to the long-serving former leader Niyazov. You will also see the Ertugrul Gazi Mosque constructed as a present to the Turkmen nation from the republic of Turkey. This unique complex consists of the mosque itself, a madressa, a cultural centre with library and assembly hall for 250 seats, and a park. Enjoy dinner before transferring to the station and boarding an overnight train bound for Dashoguz (approx 15 hours).

Eat breakfast on board before arriving in the city of Dashoguz around 10 am and transferring to your hotel. Rest up and then enjoy lunch at a local restaurant before a long afternoon of sightseeing. The conical-dome topped History Museum will be your first stop. Home to archaeological finds, clothing and other artefacts, the museum offers fantastic insight into the history of the region. This overview will help put into context the next stop of todays tour – the ruins of the ancient city of Zamahshar (Izmukshir). Located 25 kilometres southwest of Dashoguz, this fortress city is thought to date from the 3rd century. Once covered with sand, several buildings from this once grand city remain and you will explore them with your knowledgeable guide.

World Heritage site Konye-Urgench awaits after a 2-hour drive. Once a centre of the Islamic world, it was destroyed by Genghis Kham and the Timurids and fell into decay until the 20th century. Despite this, it still boasts monuments that span from the 11th to the 16th century, many of which are considered outstanding architectural achievements for the time. The mausoleum of famed Muslim theologian and philosopher Fakhr al-Din al-Razi is one of the earliest, with most scholars dating it to the 13th century. Marvel at this remarkably well-preserved structure, with its conical dome and glittering blue tiling. Next, see the mausoleum of a more controversial figure, the famously ruthless Sultan Tekesh. At nearly 100 feet tall, the building is another prime example of pre-Mongolian architecture. You’ll also stop by the more complex Turabek Khanum Mausoleum, a 14th-century monument that is richly-decorated and steeped in legend. Continue to one of the most sacred buildings in the city – the resting place of religious teacher Najmuddin Kubra. Stroll through the walled compound, which features a peaceful courtyard. Finally, wonder at the intricately carved Kutlug Timur Minaret – a slender 200-foot tower built over three centuries, the oldest of its kind in the world. Jump into a 4WD and make tracks for the Darvaza Crater also known by the more dramatic title 'Door to Hell'. The drive takes 4 hours, but the payoff is the permanently flaming crater that burns in the middle of the arid Karakum Desert. Accidentally created by geologists who tapped into a cavern filled with natural gas in the 70s, the 70-metre-wide hole has been ablaze ever since. Watch the sun set over the surreal glow of the crater with a drink in hand, while the fragrance of Turkmenistan-style barbecue – your dinner for the evening – lingers in the air. Tonight you will sleep in a basic camp set up in the vicinity of the crater.

Eat breakfast at our camp, then jump back in the 4WD and make the 4-hour return journey to Ashgabat. Stop in at the small settlement of Yerbent, a desert town made up of yurts that lie in the creases of rippling sand dunes. Learn about how people survive in this barren environment and see a monument that pays tribute to a group of socialists that died in the Basmachi Revolt in 1931. Continue to Ashgabat, looking out for the road signs that alert drivers to watch for camels. Check back into our hotel where we can enjoy a bit of luxury again after our night of camping.

Begin your day with a visit to the National Museum, a small building filled with half a million artefacts from the Bronze and Middle Ages. Other sections of the museum include displays of local nature, ethnography, military, and jewellery. Later, drive just beyond the city bounds to the pentagon fortress of Old Nissa, built no later than BC300. That so many of the columns and towers remain is a testament to the ingenuity of their design and execution. Return to the city and stop by the white and gold Turkmenbashy Ruhi Mosque and family Mausoleum, characterised by now familiar domes and thin towers. Later, bargain ad barter in the Russian Bazaar, an open-air bazaar where locals shop for groceries and household items. Next, travel 12 kilometres to the crumbling medieval city of Anau, including the beautifully restored mosque. In the evening, make a toast over panoramic views of the city from the observation platform in the glowing Wedding Palace.

Set off for Mary, the capital of Mary Province, located 5-hours drive from Ashgabat. Stop for lunch en route, and then stretch your legs with a wander through the remnants of ancient Abiverd. This fascinating archaeological site was once an important trading town and a key link on the Silk Road. Arrive in Mary in the afternoon for an overnight stay. Small mounds and the remains of walls spring from the flat landscape, and shards of brightly coloured pottery can still be seen in the sand. Continue to Mary, arriving in the afternoon. The relative affluence of this desert oasis is the result of the local cotton industry and recently discovered natural gas reserves.

Take a drive to Merv, located about 40 minutes from Mary, and explore the vast, UNESCO-protected site. The walled towns that spread across 1200 hectares are from various periods and some date back further than two millennia. Spend some time exploring the various fortresses and structures here. Take in the worn columns of Big Kizkala and Small Kizkala, climb the remarkably steep walls of Erk Kala and walk through Gayur Kala and the restored cube mausoleum of Sultan Sanjar. Return to Mary in the afternoon and visit the Regional Museum. Housed in a palace of white marble, the museum features archaeological displays and exhibits on traditional Turkmen life and culture. Later, enjoy dinner and a relaxing evening.

Return to Ashgabat, breaking up the 5-hour drive with a picnic lunch along the way. On arrival enjoy some free time to further explore this Persian 'city of love'. The 1948 earthquake affected every family in Ashgabat and resulted in the death of over 100000 people. The disaster is ingrained in the psyche of the local people and the Halk Hakydasy Memorial Complex, which features giant sculptures in memory of the tragedy and other national events, is well worth a visit. Those with an interest in textiles may wish to visit the Carpet Museum. In the afternoon, take a cable car into the foothills of the Kopet Dag Mountains for views of the city from above. On clear days, the white city set among the seemingly endless beige is a sight to behold. In the evening, bid farewell to your leader and fellow travellers over a final group dinner.

There are no activities planned for the final day and you may depart the hotel at after check out. 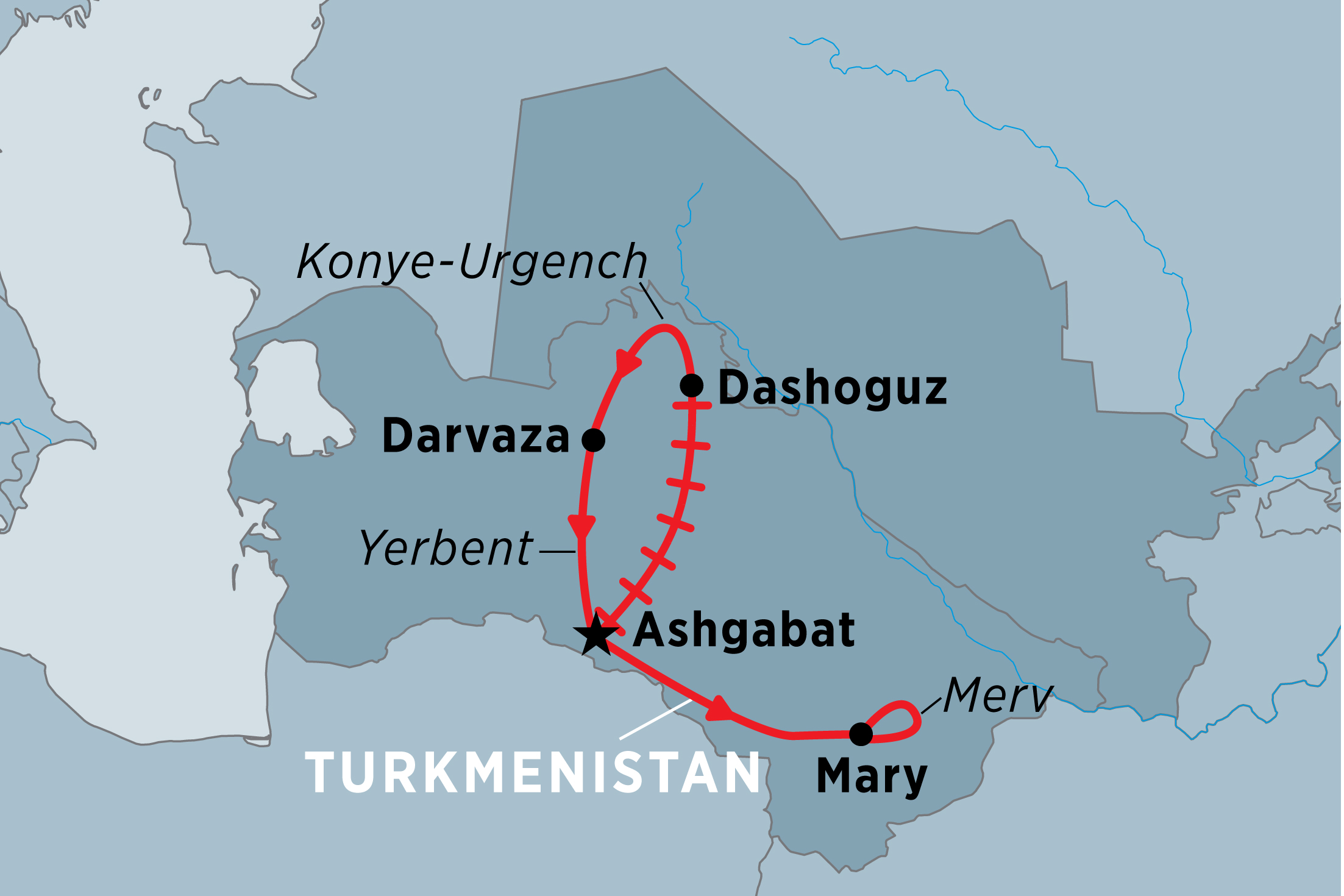