Discover the Novodevichy Convent and Cemetery and learn about history through the lives of the famous Russians who now rest here.. Journey to Leo Tolstoy’s estate at Yasnaya Polyana where he wrote his masterpieces War and Peace and Anna Karenina, plus enjoy a traditional lunch of his household recipes.. Be wowed by the delicate carvings and craft of a Siberian shaman and folk artist in Tobolsk.. Join in local life and customs as you share a meal in a Russian home in the fairytale-like Golden Ring town of Suzdal.

Peer into Russia’s past and present on this comprehensive tour through some of Russia’s less explored cities, towns of the famous Golden Ring as well as the jewels in Russia’s crown – Moscow and St Petersburg. Explore the marvels of this transcontinental nation, travelling east from Moscow to Yekaterinburg, and on to Siberia. Traverse a section of the Trans-Siberian Railway and explore the legends the past with visits to palaces, museums and Moscow’s iconic Red Square. Surround yourself with culture, history and breathtaking architecture and get beneath the surface of Russia on this ultimate 19-day small group adventure through such an endlessly intriguing country. 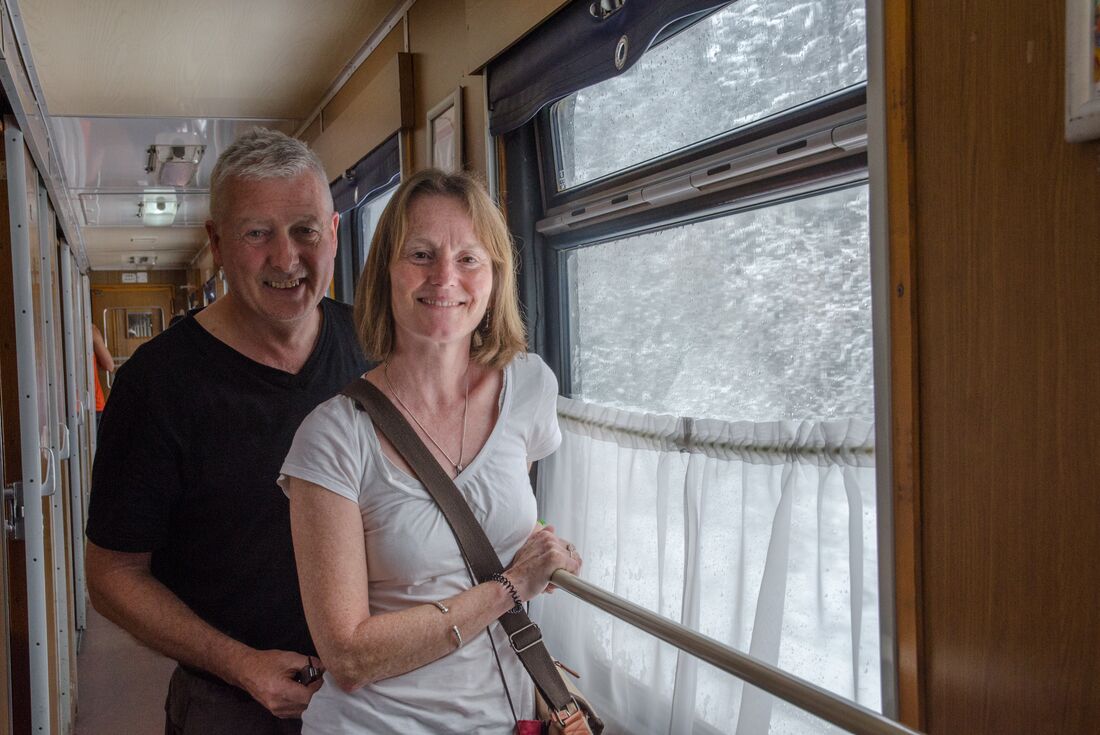 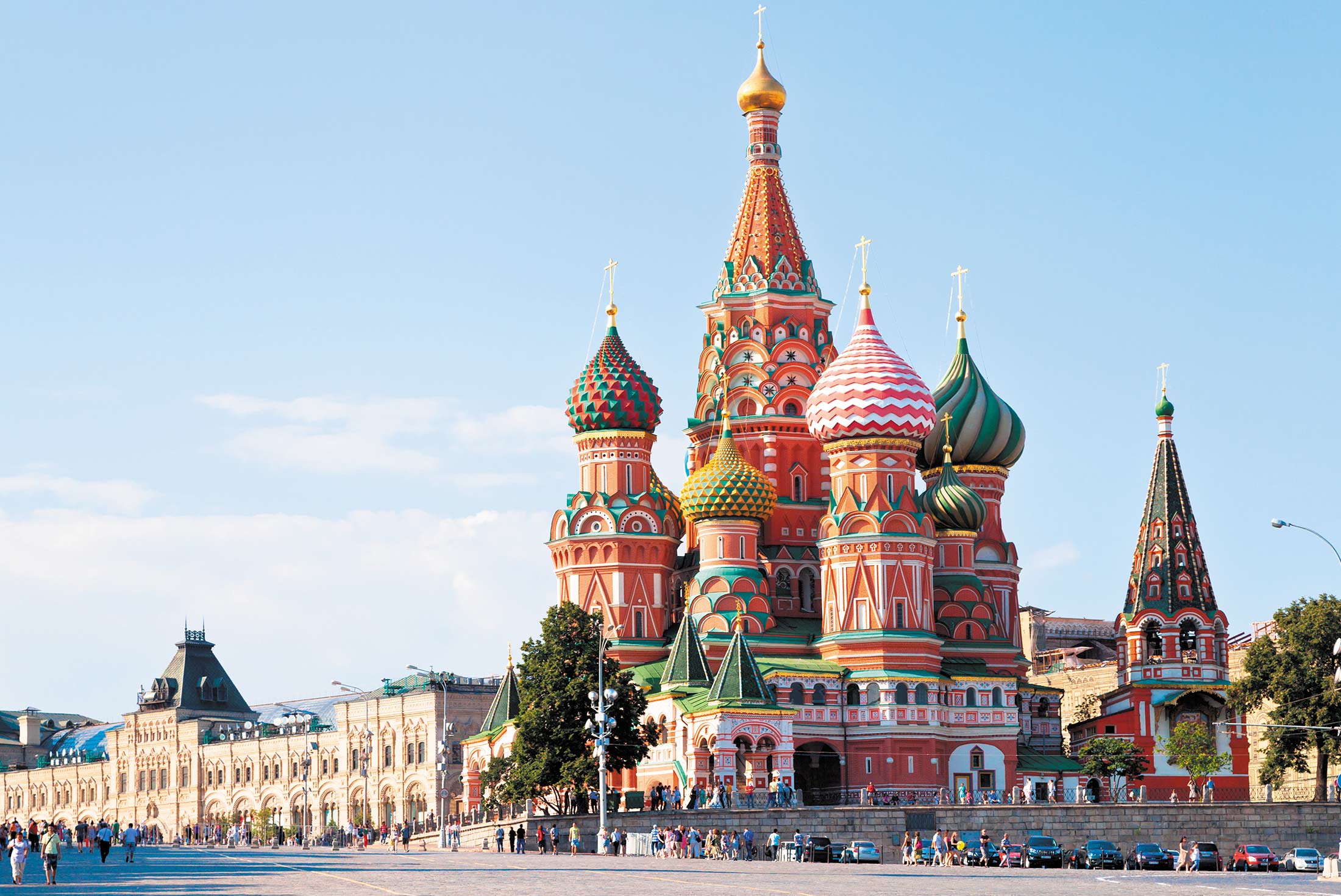 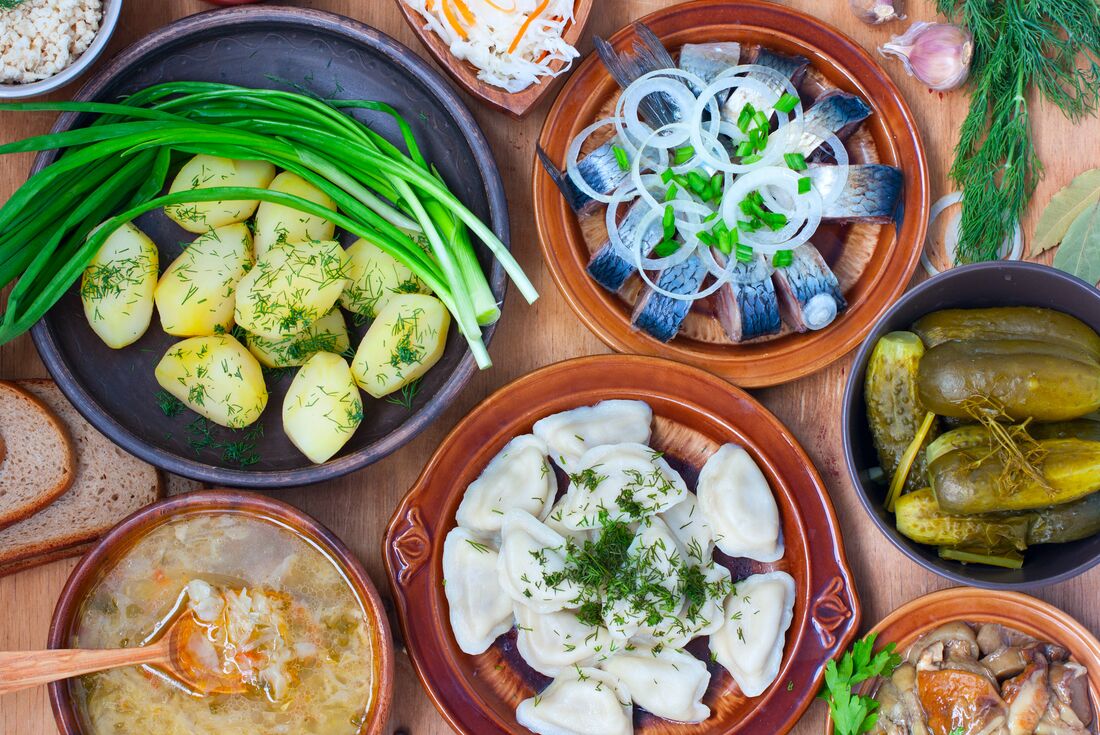 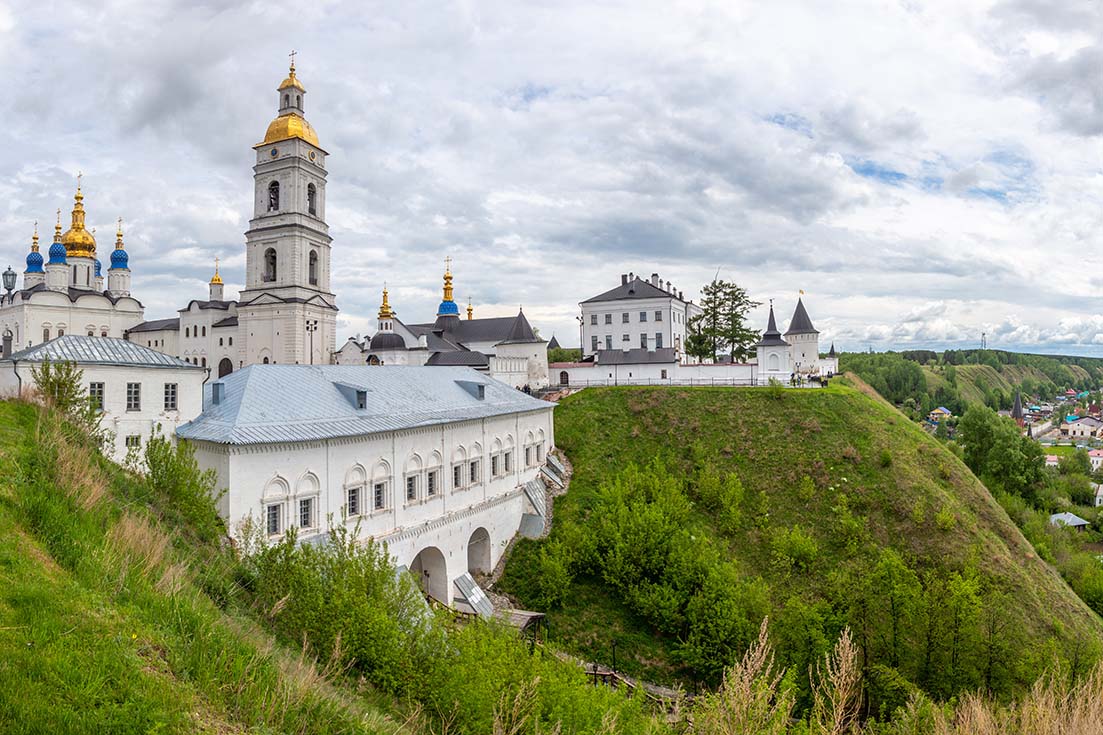 Zdrastvutye! Welcome to Russia. The great city of Moscow has survived centuries of revolution and tumult, from the days of the tsars through the communist era to today's contemporary society. Moscow is a fascinating, historic city with a wealth of sights to see. You will be collected from the airport on arrival and transferred to your hotel if you have booked an airport transfer with us prior to travel. There will be an important welcome meeting at 6 pm where you will meet your group leader. After the meeting, perhaps head with everyone for an optional dinner so you can get acquainted with your fellow travellers and enjoy your first taste of delicious Russian cuisine.

This morning, hop on the metro and join your leader on an tour to the Novodevichy Convent and Cemetery. The fortress like Convent is a true architectural masterpiece of the 16-17th century, representing the Baroque style popular in Moscow at the time. It has also played a crucial part in Russia's political and religious history. Next to it is the peaceful cemetery, where many of the greatest Russian minds rest forever, including Nikita Khrushchev, Boris Yeltsin, Mikhail Bulgakov, Nikolai Gogol, Konstantin Stanislavskiy and many others. Learn about their life and stories which also contain some of the most important parts of Russian history. In the afternoon, enjoy some free time in this magnificent city. Moscow’s metro system is renowned for its beautifully crafted stations, adorned with high ceilings, curved archways, and in some instances, chandeliers. Stalin’s vision was to create a metro system that would resemble 'palaces for the people' and, even moving roughly nine million people each day around Moscow, they are palatial, meticulously clean and an easy way to get around. So why not spend some time hopping on and off the metro to see some of the most beautiful stations? Your leader will be able to help you with more directions. Otherwise, maybe take the time to visit Red Square and Kremlin if you haven't already, or take a cruise on the Moscow river. Tonight, you might want to watch one of the renowned ballet performances on offer at a grand theatre such as the Bolshoi – be sure to book in advance so you secure a seat.

This morning, travel from Moscow to Yasnaya Polyana – the birthplace of writer Leo Tolstoy (approximately 3 hours). Yasnaya Polyana is his former estate and is now a lovingly preserved museum. Here is where he wrote his aclaimed novels War and Peace and Anna Karenina. His grave is also within the grounds. Lunch will be included here, where you'll taste traditional specialties from Tostoy's day. Afterwards, continue on to Kozlova Zaseka Station Museum, commonly known as the 'last station'. This is where Tolstoy set off for his final journey, and the station has kept its unique 19th century appearance. Today is all about exploring a time gone by and understanding the life of this famous writer and icon of Russian literature. In the late afternoon, take the short journey to Tula, where you will stay overnight. If there is time, your leader will take you for a walk around the Kremlin and central parts of town. Enjoy an optional dinner out with the group before relaxing for the evening.

In the morning, travel back to Moscow, taking approximately 4 hours. You’ll have a small amount of time in Moscow to purchase snacks or drinks for tonight’s train journey, and then late in the afternoon, board your train to Yekaterinburg (approximately 27 hours).

Enjoy breakfast included in the dining car this morning and spend the rest of the day watching the countryside pass by as you traverse this section of the Trans-Siberian railway. Arrive into Yekaterinburg in the late evening and transfer to your hotel for a restful night.

Today is time to stretch your legs and explore the fourth largest city in Russia. Named after Peter the Great’s wife, Yekaterina, and known as Sverdlovsk during the Soviet era, Yekaterinburg is located near the crossroads between Europe and Asia. In the morning, take a guided city tour of Yekaterinburg, strolling along the main streets and learning about its history and development as a major intersection in the Ural Mountains. Walk along the man-made dam 'Plotinka', catching a glimpse of the Cathedral on Blood and learning how it got such a name. Head to the former KGB headquarters and see the Black Tulip memorial – commemorating victims of the Afghan Wars. Finish in downtown, where you’ll have an optional lunch. In the afternoon, drive to the monastery complex of Ganina Yama outside of the city – the location where bodies Romanov royal family were discovered down a mine shaft after their horrific execution.

Yekaterinburg is close to the Europe-Asia border and so today, you will visit one of the monuments that symbolise this 'border' between West and East. This monument was the first, opened in 1837, and is located in the town of Pervouralsk. It was built when the country was preparing for its first visit by Emperor Alexander II to the Ural region. The journey takes around 1 hour. Enjoy a picnic lunch, including champagne and caviar. Transfer back to Yekaterinburg in the afternoon, with an evening at your leisure.

Take a morning transfer to the Siberian city of Tyumen (approximately 5 hours). Founded in 1586, Tyumen was the first major city in Siberia. Walk down the Tura Embankment and over Lover’s Bridge and visit the Aleksandrovsky Garden. This evening, enjoy an included dinner of northern Siberian cuisine with your group at Chum Restaurant-Museum. It’s a unique institution that feels like you’re in a lodge deep in the Siberian wilderness.

In the morning, transfer to Pokrovskoye (approximately 1.5 hours). Here, you will visit the House-Museum of Grigory Rasputin – a mysterious man who had great influence over the Romanovs, and who died at the hands of conspirators in St Petersburg. His original house was demolished in 1980, however in 1991, Marina and Vladimir Smirnov reconstructed the house opposite its original position and opened a private museum. After visiting the museum, continue on to Tobolsk (approximately 2.5 hours). Lunch is included today.

Today, take a guided city tour of Tobolsk, visiting the Kremlin and the old Castle Prison, where prisoners including Fyodor Dostoevsky and Tsar Nicholas II served sentences. Tobolsk is rich with history, and your knowledgeable guide will provide great insight into the past. In the afternoon, take a fascinating visit to Minsalim’s workshop – a welcoming artist and sometimes shaman who creates traditional carvings from bone, wood and rock. Check out his refined work over a cup of tea and learn about some of the cultures who have long called Siberia home. If you have time, you could explore the old town beneath the Kremlin's gatehouse, or the Governor's House – one of the best in Siberia and also known as the Museum of the Family of Nicholas II, opened in 2018.

Today is quite a long travel day where you will transfer back to Moscow. Take private transport back to Tyumen (approximately 4 hours), then head on an afternoon flight to Moscow (approximately 2 hours). Depending on flight schedules and traffic from the airport, you should be back in Russia’s capital early evening, in time for a optional dinner with your group. Look back over your Russian journey together as you celebrate the memories you've made.

Spend the day at your leisure in the grand city of Moscow. You might like to head on the metro to discover the Red Square and palatial shopping mall GUM, or better yet, you may like to book yourself in to an Urban Adventures tour, like Made In Moscow Shopping Tour, where you’ll spend the afternoon checking out the bohemian district, full of modern art and hipster culture. For more information see urbanadventures.com/destination/Moscow-tours. Keep in mind that there will be another group meeting at 6 pm, where your group composition may change. After the meeting, your group leader will organise an optional meal so you can enjoy some delicious Russian cuisine with new friends, if you wish. 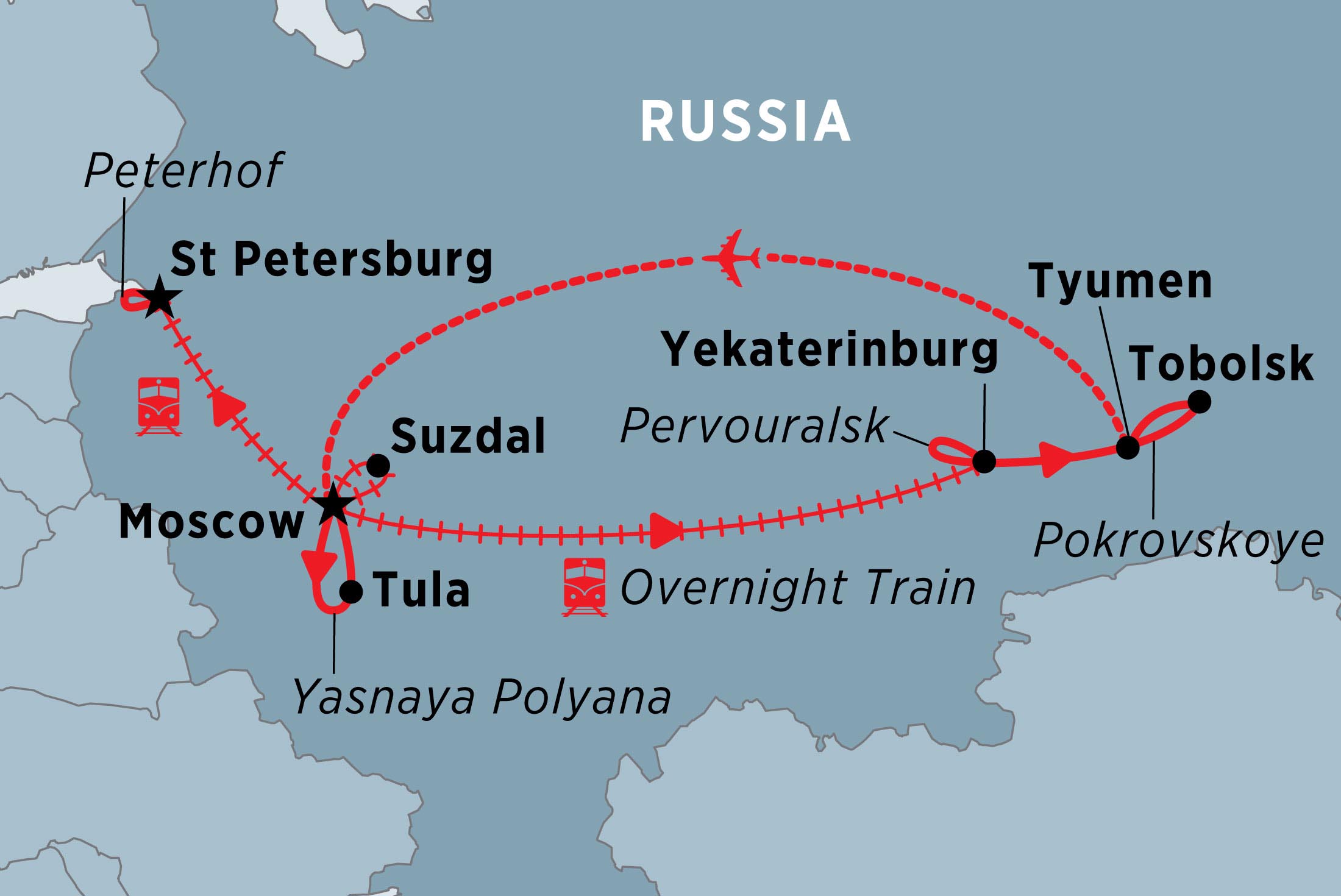