Spirit of the Silk Road

Spirit of the Silk Road

Enter the fascinating Xinjiang Autonomous Region and encounter a melting pot of cultures and traditions in Urumqi.. Share meals and stories with several different ethnic groups of the region, including the Uyghur, Tajik and Kyrgyz people.. In the comfort of a private vehicle, travel an incredible breadth of landscapes, from the lush pastures of Heavenly Lake to the Taklamakan Desert and the rugged Pamir range.. Peruse the Kashgar Sunday Bazaar, where the spirit of Silk Road trade lives on in a fascinating, booming frontier city.

Uncover the treasures of the famous Silk Route and witness the great clash of cultures on these ancient crossroads. This special itinerary not only takes in the markets, museums, monuments, and Buddhist and Islamic sites that make this region so magical – it delves deep into the heart of the Silk Road and ventures to where few other trips do. Head into the Taklamakan Desert – China’s ‘Death Valley’ – and the high Pamir mountains, break bread and share stories with Uyghur, Tajik and Kyrgyz folk in their homes, and marvel at ancient ruins in remote desert locations on this incredible journey through the past and China’s modern present. 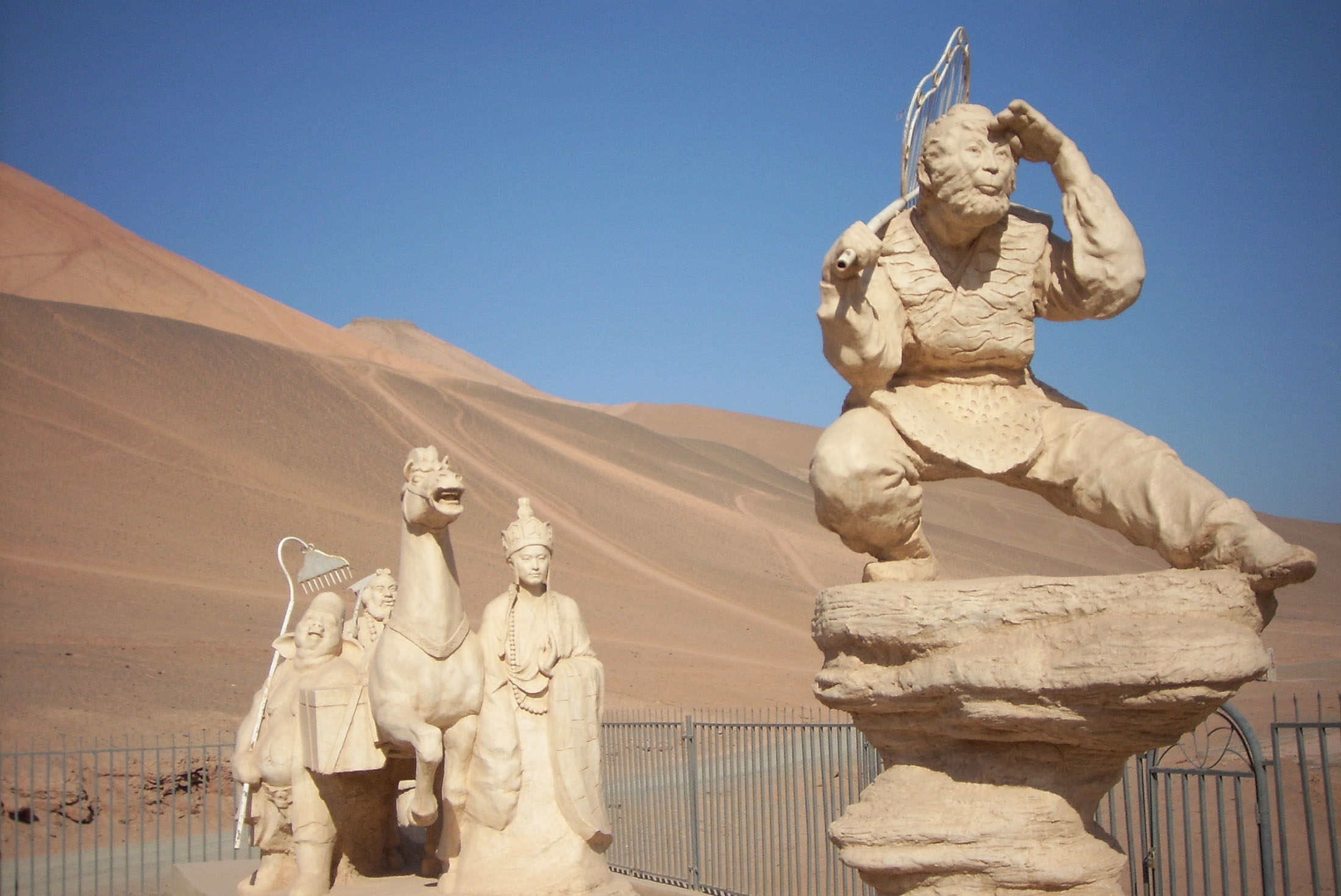 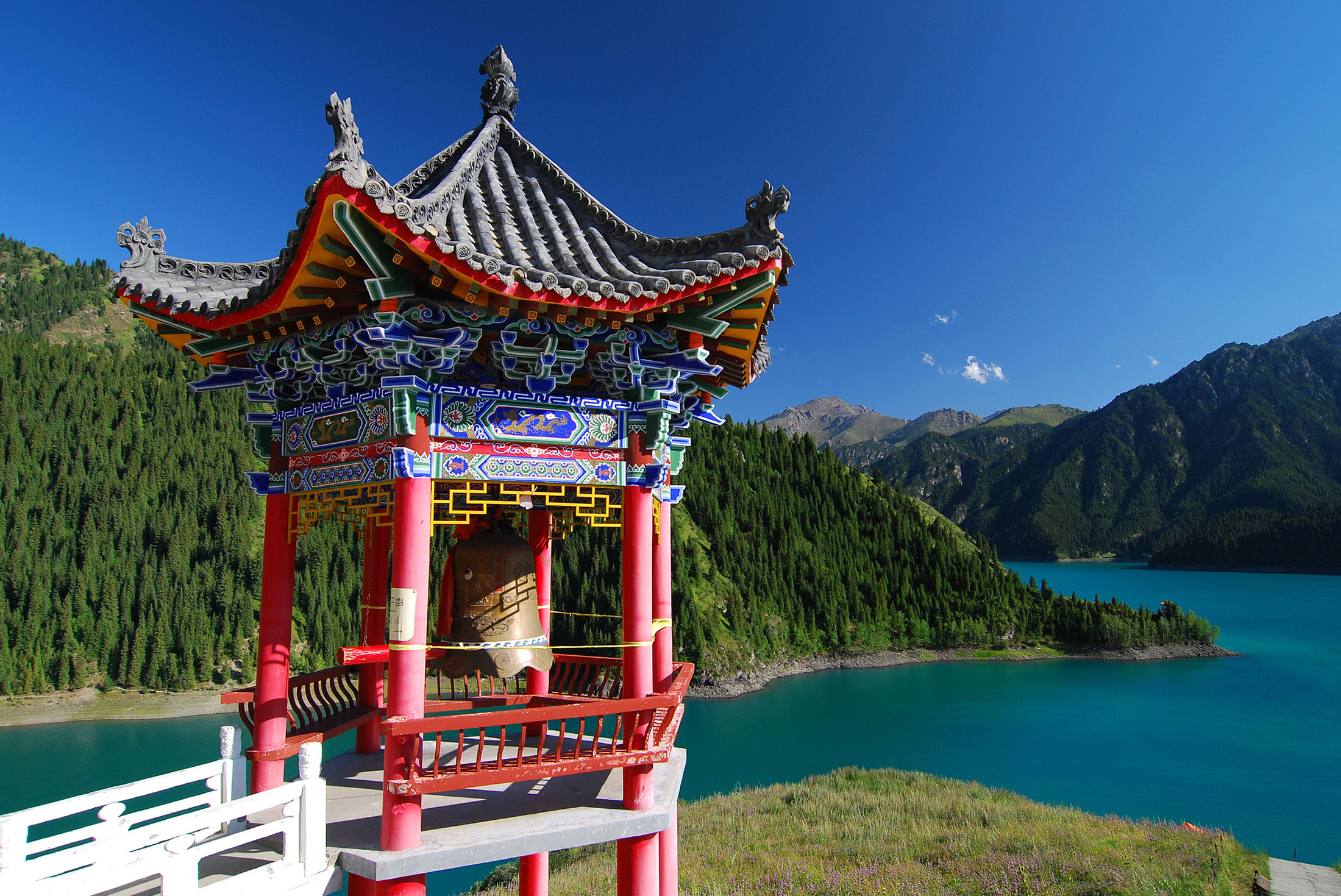 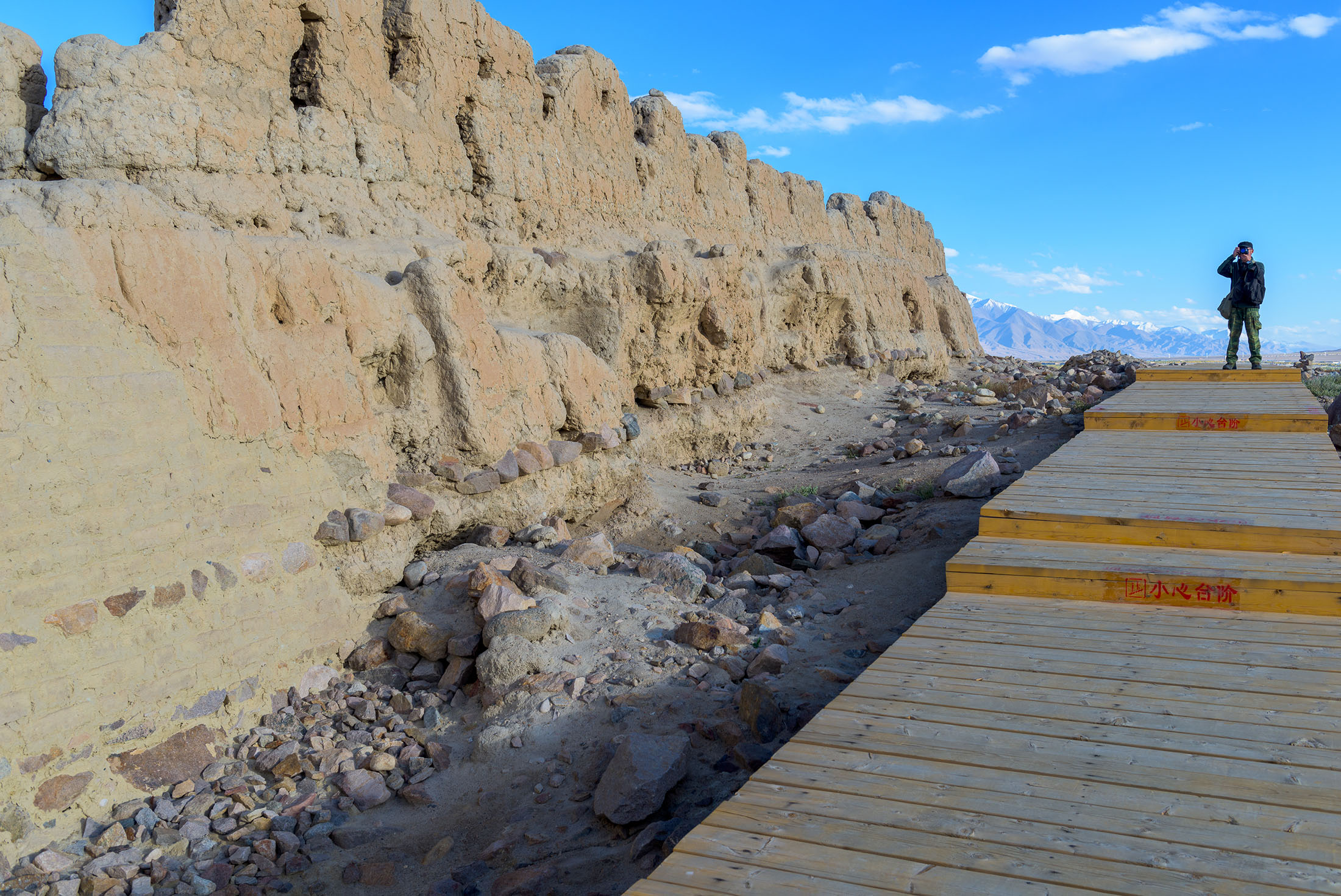 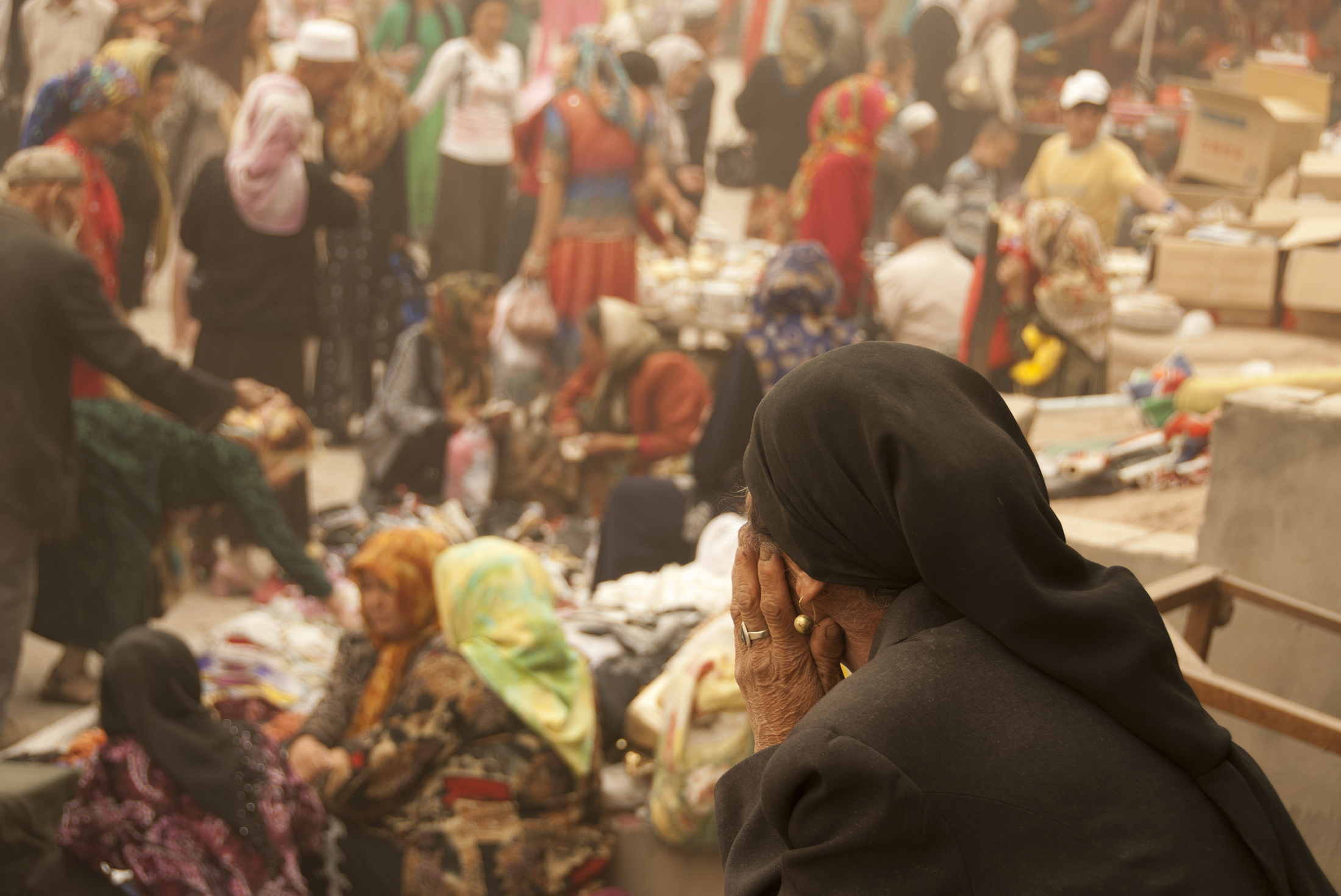 Assalamu laykum! Welcome to Xinjiang. An arrival transfer is included, so please provide your flight details at the time of booking, or no later than 14 days prior to travel. Once you have provided your details a transfer representative will be booked to meet you and transfer you to your hotel. There will be a welcome meeting at the hotel tonight at 6 pm. Urumqi is the capital of the Xinjiang Uyghur Autonomous Region, a multinational province with many languages, customs, cultures and colourful ethnic traditions. It is also China's gateway to Central Asia, with air links to all the former Soviet republics, and it is widely regarded as the city farthest from the ocean.

Leave the busy city behind and drive out to the beauty of Heavenly Lake, approximately 2 hours away. The area resembles a little piece of alpine scenery with hills covered by fir trees and the area dotted with Kazakh settlements. Local people live in tent-like structures made from animal skin, known as yurts. The steel blue lake sits below the towering Peak of God (Bogeda Feng). You can walk along the lakeside or take longer walks up into the hills, taking in waterfalls, greenery, and the memorable mountain scenery which will be in start contrast to some of the landscapes later on our journey. Back in Urumqi, visit the large and fascinating Xinjiang Autonomous Region Museum, which houses an amazing collection of Silk Road artefacts and treasures, including some incredibly well preserved mummies.

Today you will travel from Urumqi to Turpan (approximately 2 hours). The Turpan Depression is second only to the Dead Sea in Jordan as the lowest point on earth, and it can get fiercly hot here in summer. It's a small city by Chinese standards, but the surrounding area is full of interesting places such as the Jiaohe ruins, remnants of a once great city on the Silk Road. Learn about the ancient Karez irrigation system at the Turpan Karez Museum. In order to get enough water in the area, long ago the local people dug lengthy underground tunnels that brought the flowing water from the mountains in the north. These tunnels have vertical access shafts that were spaced at intervals that allowed people to bring up water in buckets or to access the tunnel for repairs. You will also stop at Emin Minaret, which at 44 metres is the tallest in China. It was built in 1777 to honour a local general, Emin Khoja. The geometric patterns that cover the outer walls are beautiful, and reflect both Islamic and Chinese design. After a rewarding day of sightseeing, spend the night in Turpan. Perhaps visit the night market tonight to browse and sample some of the local food on offer.

This morning visit the ruins of the ancient town of Jiaohe, located 13 kilometers west of Turpan. The name ‘Jiaohe’ refers to the two rivers that join together in the southern part of the town. It was built with rammed earth and bricks 2,300 years ago. Spend some time wandering around the ruins. Be sure to bring plenty of sunscreen and water, as well as a hat, and brace yourself for the heat. You will then return to Turpan for a free afternoon. You can escape the heat with a walk under a beautiful central avenue that’s covered with grape vines, where couples stroll, old men play games, and shops and cafes line the side streets.

Travel from Turpan to Kuqa by train (approximately 7 hours), skirting the deserts of central Xinjiang. Glimpse the Taklamakan, also known as the “Place of Ruins” or the 'Sea of Death' and the largest desert in China at over 1,000 kilometres long and 400 kilometres wide. Lying between the Tien Shan and Kunlun mountain ranges, the Taklamakan Desert is a waterless death trap, experiencing an average annual rainfall of just 0.4in (1cm). Legend states that you can get into the Taklamakan, but you may never get out. Don't worry, we will! Arrive in Kuqa and transfer to our hotel.

Set out this morning on a tour of Kuqa with a local guide. This large Han majority modern city still has pockets of Uyghur culture to explore. Visit the old town, bazaar and Great Mosque. The most is the 2nd largest in Xinjiang behind the Id Kah Mosque in Kashgar. Then travel the 23km out to the Subash Ancient City ruins - an extensive complex of Buddhist buildings from the 3-13th centuries.  If you have free time during your stay in Kuqa, some other sights you might like to explore include  the small Rasta Moque a few kms from the city centre, the rebuilt Qiuci Palace and Qing dynasty wall in the old town or th Maulana Ashiddin Mazar - a tomb and mosque dedicated to a 13th century Arabian missionary.

Visit the Thousand Buddha Caves and Kizil Valley today, approximately 75 kilometres from Kuqa. The Caves sit on the cliffs on the northern bank of the Muzat River. Currently there are 236 preserved coded caves, which are divided into west, inner valley and rear mountain areas, extending to over 3 kilometres. The interior murals date from the 3rd to the 8th centuries and, as ancient Kuqa was an ethnically diverse place, artisans were inspired by Afghan, Persian and Indian motifs and styles. The heavy use of blue pigment in middle-period murals is a Persian influence, for example. Only the last phase shows any Chinese influence. Spend time exploring this fascinating site with a local guide.

Another long travel day today on our next and final train to Kashgar (approx 8 hours). Watch the scenery go by, share snacks with your fellow travellers or catch up on the experiences of the last few days in your travel diary. Arrive in Kashgar and transfer to the hotel.

Once a frontier town straddling the crossroads of empires and trading routes, Kashgar is now very much a modern, fast developing city that continues to take advantage of its geographical position near the border of Pakistan and Central Asia. Far from Beijing it may be, but there are still plenty of signs that you are still in China, such as the country's largest Chairman Mao statue. The once extensive Old Town is just about all but gone, with only a few areas still left to be demolished or rebuilt under the guise of it being overcrowded, with poor drainage and vulnerable to earthquakes. There has been a huge loss of culture with Uyghur families being relocated to newly built apartments. We explore remnants of the past and Kashgar's new reality with a local guide today. Our tour will include stopping in at a Uyghur musical instrument workshop as well as spending some time enjoying the hospitality of a local family for a traditional meal. In your free time perhaps take advantage of the proximity to Pakistan by having a meal of curry and chapattis at a Pakistani cafe, play a round or two with the lads hanging out at the open door pool tables on Id Kah Square, get lost meandering down lanes and alleyways, stopping at stalls selling tandoori-baked bagels or mulberry juice, or visit some of the city's holy sites such asthe Abakh Hoja Mausoleum.

Kashgar's main attraction is undoubtedly the Sunday Bazaar, which you’ll visit today. It’s said to be one of the biggest markets in Asia, and on its main day it can feel like everyone from hundreds of miles around has converged on the city. It’s alive with traders selling all kinds of wares – rugs, hats, spices, boots, dates, ingredients for traditional medicines, auto parts, you name it. Now much modernised, it's divided into two sections – the Downtown Bazaar, which sells clothing, household goods, produce and everything else you could imagine, and the Animal Bazaar just outside the city. You'll also travel out to the Animal Bazaar to see the frantic bargaining and bustle of local herdsmen and farmers trading and bartering – even taking donkeys for a 'test drive' – while their handlers catch up on the latest news and gossip. It’s certainly a memorable scene to see every farmer, handler, sheep, cow, camel, horse and donkey from the surrounding villages packed into a small square overflowing with sound and smell. Later, return to the city to visit the main bazaar and mingle with the traders and shoppers at your own pace, bringing to life the legends of one of the world's great trading towns. If we didn't have a chance yesterday, we will make sure we stop by the Id Kah Mosque today - it's the largest in the province and a focal point of Kashgar culture.

Travel by to Karakul lake via the town of Upal this morning (approximately 5-6 hours). The Upal country market is a great place to stop off to stretch your legs and browse through the food and daily supplies on sale. Next stop is Karakul Lake with the stunning snow capped Muztag Mountain as the backdrop. Here you'll visit a Kyrgyz family, the local ethnic group living in this area. Try their specialty of milk tea, and there might be the opportunity for some traditional dishes for lunch. You'll also see their handicrafts and learn a little about customs and daily life here. Then, continue on to Tashkurgan, where the Tajiks make up a sizeable part of the population – around 30,000 altogether. This town is the last town on the China side, situated high in the Pamir mountains along the border crossing between China and Pakistan. The options for accommodation are limited here, but you'll stay in a comfortable hotel for the night.

Learn about the history of the area today with a visit to the Tajik Museum and the nearby Stone City – an ancient fort on the outskirts of town. You'll then meet a Tajik family and spend time enjoying a meal together. Tajik people are the only Caucasian ethnic group in China. Learn about their life and their traditions over a light lunch. Travel back to Kashgar this afternoon, following the same route that brought you here. Tonight is your final chance to enjoy a meal together as a group and reflect on tour journey on China's Silk Road.