Breathtaking walks with expansive views are the perfect way to experience Sicily’s spectacular beauty. Explore the lunar-like landscape of Europe’s largest active volcano – the towering Mount Etna. Discover the truly ancient history of the island with the ‘Sicilian Stonehenge’ in the Malabotta forest. Enjoy a lunch of local specialties in the forest, with views of Mount Etna rising in front of you.. Search crumbling Greek and Roman ruins in the charming seaside town of Taormina

Ancient civilisations, prehistoric caves, Byzantine churches, Baroque buildings and majestic landscape – the island of Sicily has it all. Immerse yourself in all the glory of Sicily including its mouth-watering cuisine! Explore the volcanic valleys of Mt. Etna, timeworn streets of Siracusa, the architectural wonders of Ragusa and the rich history of Palermo. Starring dramatic cliffside villages, clear waters and delicious seafood, this is a chance to experience the highlights of Sicily. 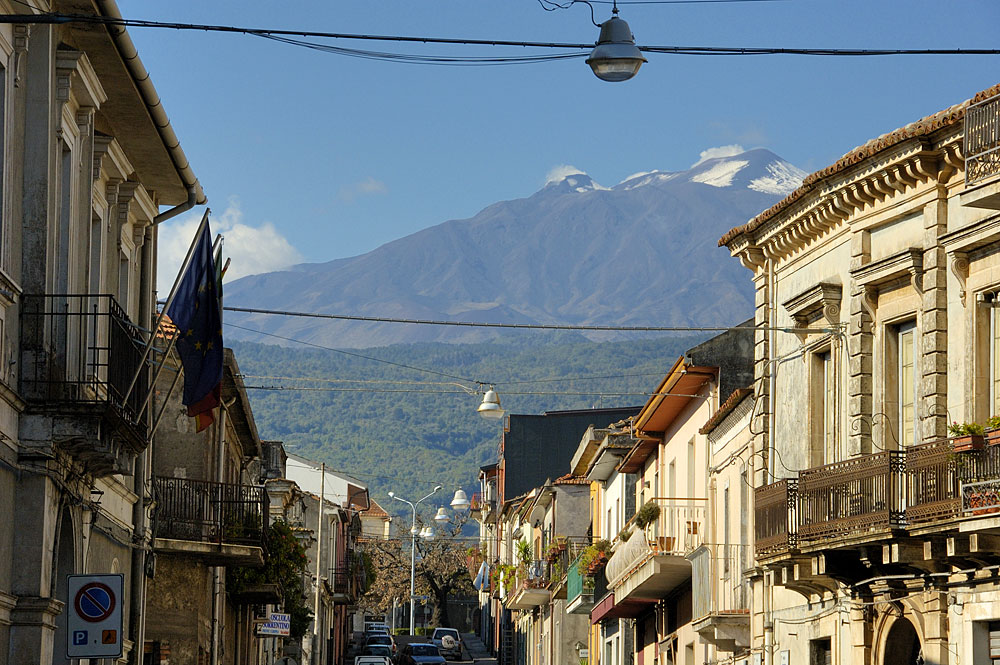 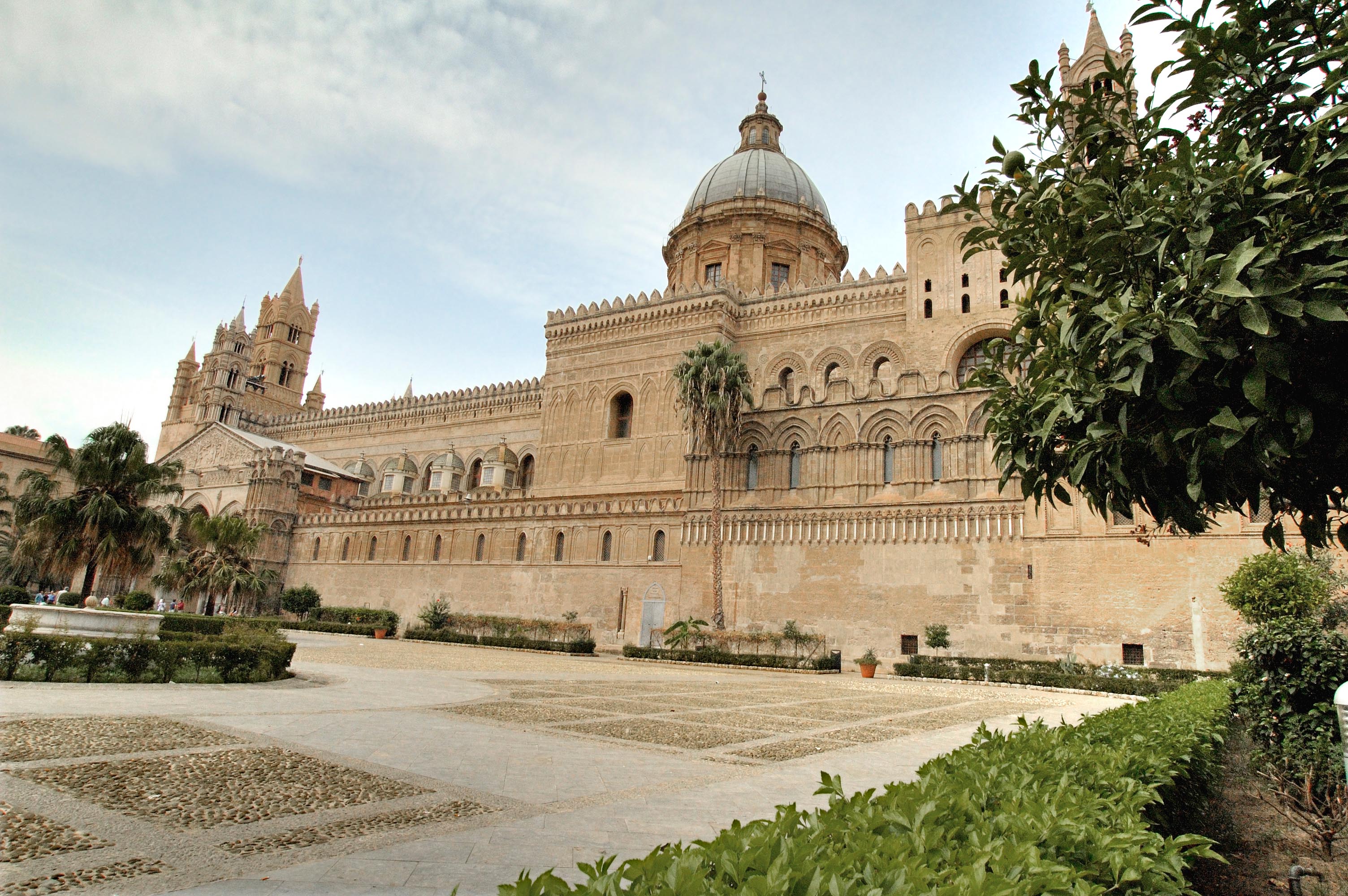 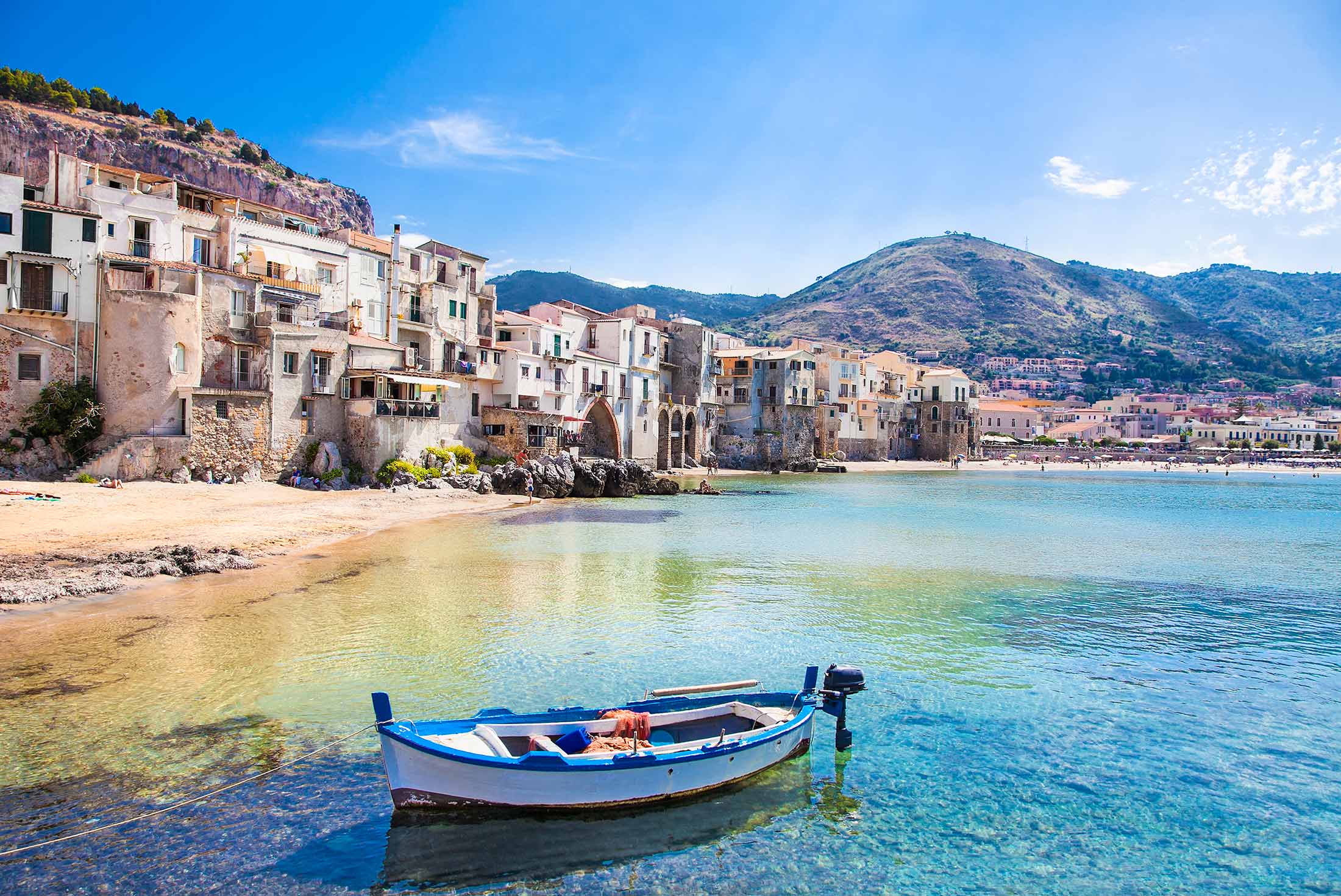 Your journey starts in the bustling city of Palermo, the capital of Sicily. On this illustrious island you’ll be rewarded with rustic coastal retreats, delicious provincial dishes, and a fascinating gathering of historic and natural sites. There are no activities planned before tonight's group meeting so you may arrive at any time. After the meeting, you will join your group for your first taste of Sicilian cuisine in a local restaurant.

This morning, stroll through the old heart of Palermo admiring some of its main monuments, such as the cathedral, which has a wonderful mix of styles. Originally built in the 12th century, it has been modified a number of times, most notably in the 18th century with the addition of its dome. Explore a labyrinth of small alleyways, buzzing colourful market squares and winding roads. Then take a private minibus to nearby Monreale, situated in a panoramic position above Palermo with fantastic views over the city and the sea. Visit the stunning interior and exterior of its cathedral, described as one of the ‘wonders of the medieval world’, and climb to its roof. Stroll through the old historical centre before returning to Palermo where the afternoon is free for you to continue to explore this extraordinary city. In the evening why not join the group for an optional dinner in one of the nearby traditional Sicilian cuisine restaurants.

Travel along the northern coast to the beautiful small town of Cefalù, one of Sicily’s ‘undiscovered treasures’. You will be dropped off at the foot of the town’s Roca, a mountain with a castle on top that overlooks the old city centre. Embark on a walk up to the castle, then descend back into the old town and discover its charming narrow alleyways and imposing Norman cathedral. After lunch, maybe take a swim before continuing your travels along the north coast and then inland into the foothills of the Nebrodi Mountains. Upon arrival, settle into the agriturismo, overlooking the coast and the Aeolian Islands.

After a leisurely breakfast in the morning, start with a short walk through the spiralling streets of nearby Montalbano Elicona. Discover the interesting medieval town centre and walk to the top of its impressive 13th century castle, which was recently restored to its full glory. Then hop back onto your private bus to discover the natural beauty of the greenery-drenched forest of Malabotta, a beautiful and little known nature reserve inland. Embark on a circular walk, partly through the forest, partly alongside strange rock formations locally known as ‘megaliti’. An ancient megalithic site, the Megaliti dell'Argimusco (now known as the ‘Sicilian Stonehenge’) has recently been discovered here. Enjoy a lunch of local specialties in the forest, with views of Mount Etna rising in front of you. Continue to our next destination, the enchanting sea-side town of Taormina, situated in one of the most dramatic spots of the whole Mediterranean.

Drive to the charming hilltop town of Castelmola, a small fortified town with stunning views over the surrounding area, including Taormina, Mount Etna and the Mediterranean. After a stroll through its medieval streets, an optional visit to the castle and perhaps a drink on one of the terraces, walk down to Taormina along a beautiful panoramic footpath. Through pleasant agricultural landscape, with breathtaking views of the coastline and glorious Etna, reach charming Taormina. Notice the Greek influence in the architecture, and be transported back to the days when this part of Italy remained an Aegean stronghold. Picturesque ruins and a backdrop of Etna make for memorable views. Walk through the backstreets, gardens, and of course visit the world famous Greek/Roman theatre and the cathedral. The whole afternoon will be at your leisure, so there's plenty of time to explore at your own pace. Those interested can join an optional walk down to the sea opposite beautiful Isola Bella, a small protected island nature reserve. After a swim and some relaxation, and possibly a drink in the Mediterranean sun, you’d return to town by cable car.

Come face-to-face with Europe’s largest active volcano, Mt Etna, today. Take your private minibus from Taormina into the valley of the Alcantara River, irrigated by a complex system of basins and canals that date back to the times of the Arab domination of Sicily. In Francavilla you’ll walk along the river, through a pleasant terraced landscape of orchards and fruit trees, and pass a few hamlets built of lava stone. See many strange lava formations, all sculpted by the Alcantara River. Back on your minibus continue along the river, up to the charming little town of Linguaglossa. The volcano makes for very fertile soil, so enjoy a wine tasting in one of the renowned Etna wineries while overlooking the sea. Next, travel along the scenic Via MareNeve, the ‘road of sea and snow’. Here you can see the most recent lava flows, some only a few years old, reminding you that Etna is still very active! A walk here lets you feel the immense forces still working beneath you. Continue to the Sartorius Mountains, a completely different landscape. Walk partly through the forest and partly over older lava flows to a mountain hut with special views over the Strait of Messina. It’s then on to the southern side of Mount Etna, perhaps the best known part – again a completely different landscape. Here you will settle into a charming hotel that’s the highest in Sicily.

Get ready to travel towards the very top of Mount Etna by cable car. Once arrived at an altitude of 2,500m you will then embark on a walk to the famous and dramatic Valle del Bove (Bull Valley), a valley formed when the original crater of Etna collapsed. It is Etna’s largest valley, in which many lava flows can be seen, one atop of the other. From here you will start your downhill walk past the craters of Montagnola, finishing at the crater series of Silvestri, a barren landscape formed by the explosion of 1892. Alternatively there is the option to take the cable car back down to base. After lunch you will continue on to our next destination, Ragusa.

Start the day with a short stroll through Ragusa, which is equally beautiful by day as it is by night. Ragusa is one of the most scenic Sicilian towns, and one that blends wonderfully into its surrounding landscape. The ‘new’ baroque city of Ragusa was completely rebuilt after the devastating earthquake of 1693, but the historic part of the town still features older monuments. Both parts of the town deserve a visit. You will then travel on to Modica, yet another wonderful baroque city, famous for its precious chocolate, made for centuries according to the same secret recipe. Indulge in a chocolate tasting at the oldest chocolate factory in Sicily, active since 1880. They still make their chocolate using the same ancient technique and ingredients brought to Sicily by the Spaniards. Travel back to Ragusa by local train, an experience in itself. Back in Ragusa, stroll through the wonderful baroque streets and choose from a range of restaurant options for dinner.

Travel on to the nature reserve of Vendicari, one of the last remaining pristine bits of coastline in Sicily. Embark on a relaxed coastal walk, with the possibility of a refreshing swim. Continue to the beautiful small village of Marzamemi, deemed to be the most beautiful of all Sicilian fishing villages, with time for lunch and a stroll along the harbour. By mid afternoon you will leave for nearby Noto, perhaps the best known of Sicily's baroque cities, where you can admire the wonderful colours of its many monuments in the beautiful late afternoon light. Next on your itinerary is Syracuse (Italian: Siracusa), an ancient town by the sea that was of immense importance as Greek Syracuse. Much of its charm lies in wandering the narrow medieval lanes, past romantically crumbling medieval palaces and churches. Your feature stay hotel is located in the middle of the lovely historical heart of Siracusa, on the island of Ortigia. Hidden in its basement is Europe's oldest Jewish ritual bath, a so called mikveh, discovered during renovation works.

This morning, take a walking tour through the most interesting parts of the old town. You will discover many archaeological areas (some are amongst the world’s finest), countless baroque churches and many other important monuments. The character of the city is enchanting, with its crumbling facades and balconies supported for centuries by a host of stone lions, tigers, bears, dragons, moors, satyrs, devils, angels, kings, paupers, wenches and cherubs. Walk along limestone-paved streets overhung with drying laundry and ancient scaffolding, and discover some of the most expansive piazzas that Italy has to offer. Passing some open doors might give you a glimpse of an ornate secret courtyard, whilst others open right on to someone's dining room where lunch is being prepared. The rest of the day will be free for you to take a boat trip around the island of Ortigia, a bike ride through the old city, or to just stroll around town, visit its monuments and enjoy a coffee or savour a granita in one of the lively bars. This evening you can gather together for an optional farewell dinner, a great opportunity to reflect on your just-completed Sicilian adventure.

Your trip will come to an end after breakfast in Siracusa. There are a number of bus and train services to onward destinations including Catania (airport) and Messina. The bus station is within walking distance of the hotel and the train station is also close by. Arrivederci! 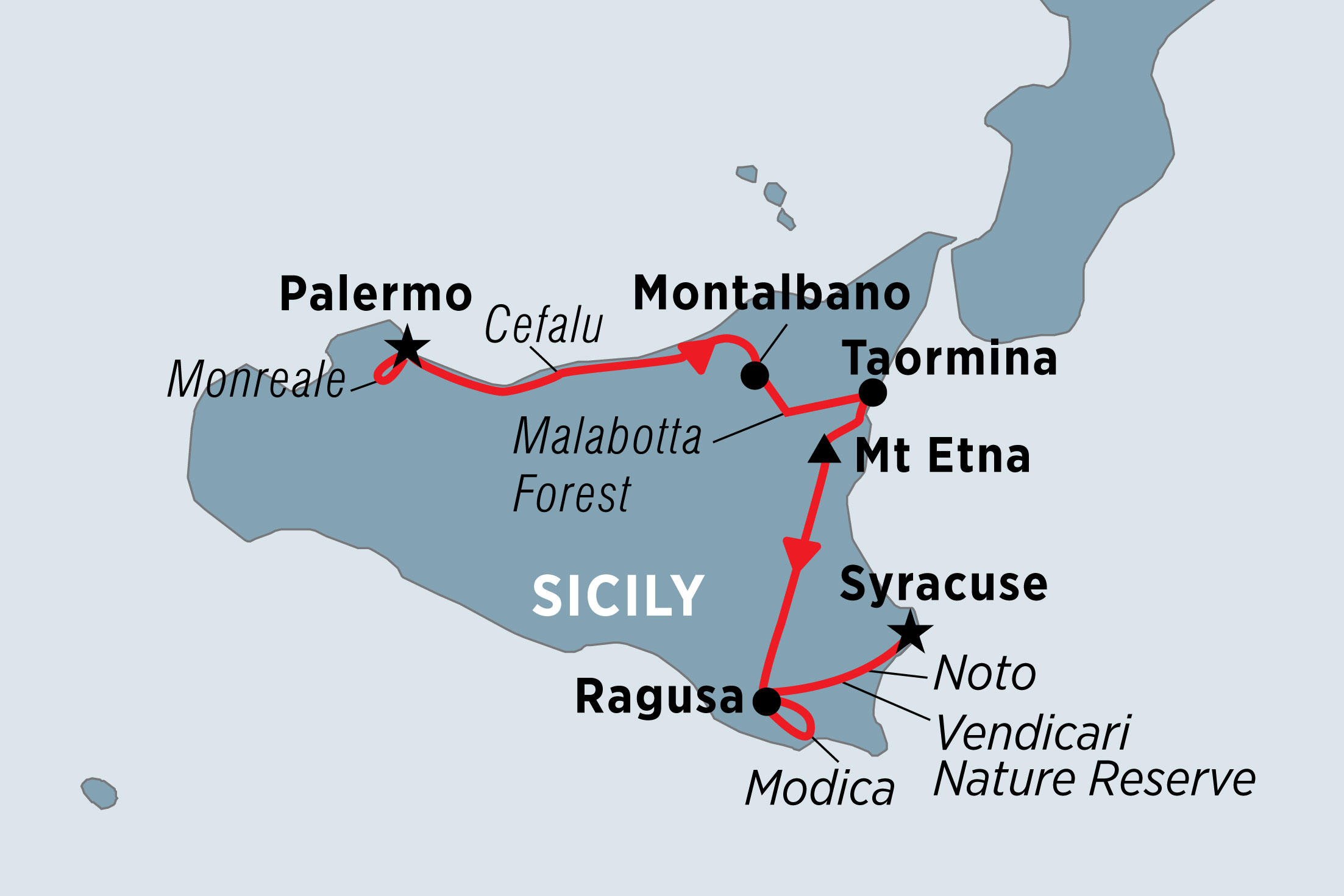