Travel through Transylvania and see the gothic churches and castles that inspired the legend behind the world’s most famous vampire, Count Dracula. In Brasov, listen to ghost stories and legends about the Black Church and city fortifications. Visit Viscri’s 15th-century fortified church and hear how this church saved locals from invaders. Afterwards visit a local in her home and be entertained by stories about village life.. Delve into the communist past and the thriving, artistic present-day vibe of Bucharest, a surprisingly dynamic city on the edge of Eastern Europe.. Experience delicious home-cooked meals and true Romanian hospitality on a visit to some of the country’s lesser known towns and villages. Embark on a horse and cart ride with a local coachman through a landscape of rolling hills and wildflower meadows.

No place on Earth conjures images of gothic horror quite like Transylvania. Beyond Bram Stoker’s famous Count Dracula and Ceausescu’s equally horrifying reign of terror exists a land of surprising natural beauty, remarkably preserved medieval villages and a very modern capital city. From Bran Castle in Brasov and the pristine forests outside Viscri, to the shabby chic of Bucharest, this tour delivers the real, resplendent Romania. 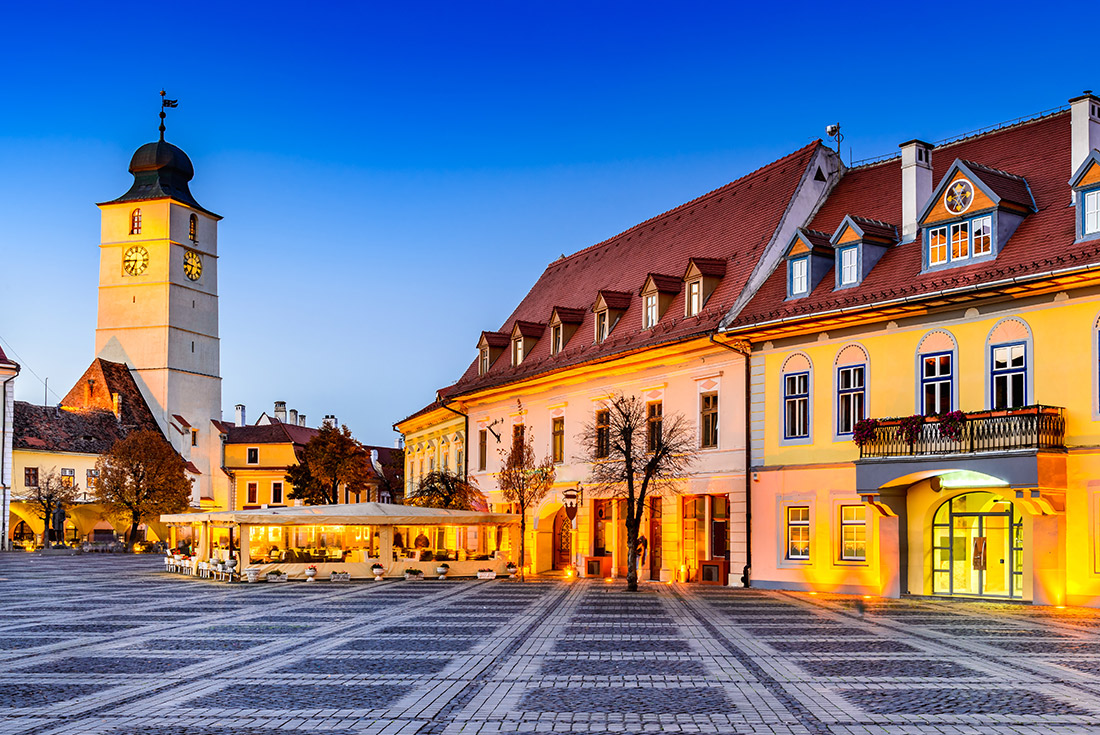 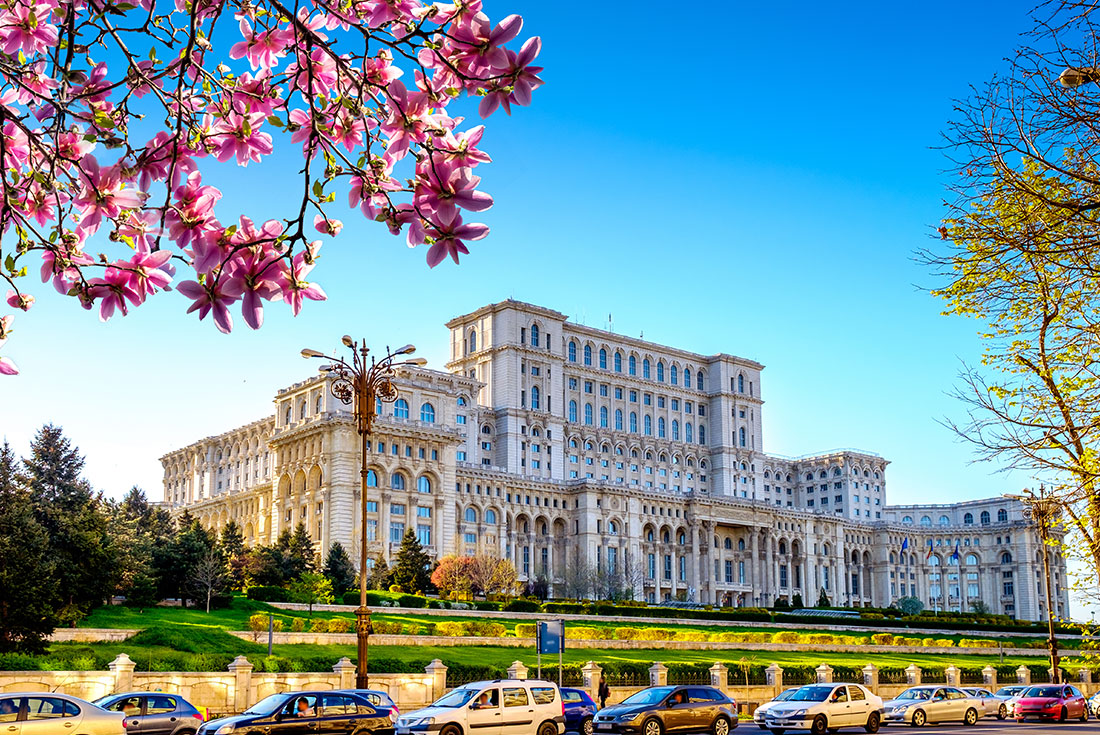 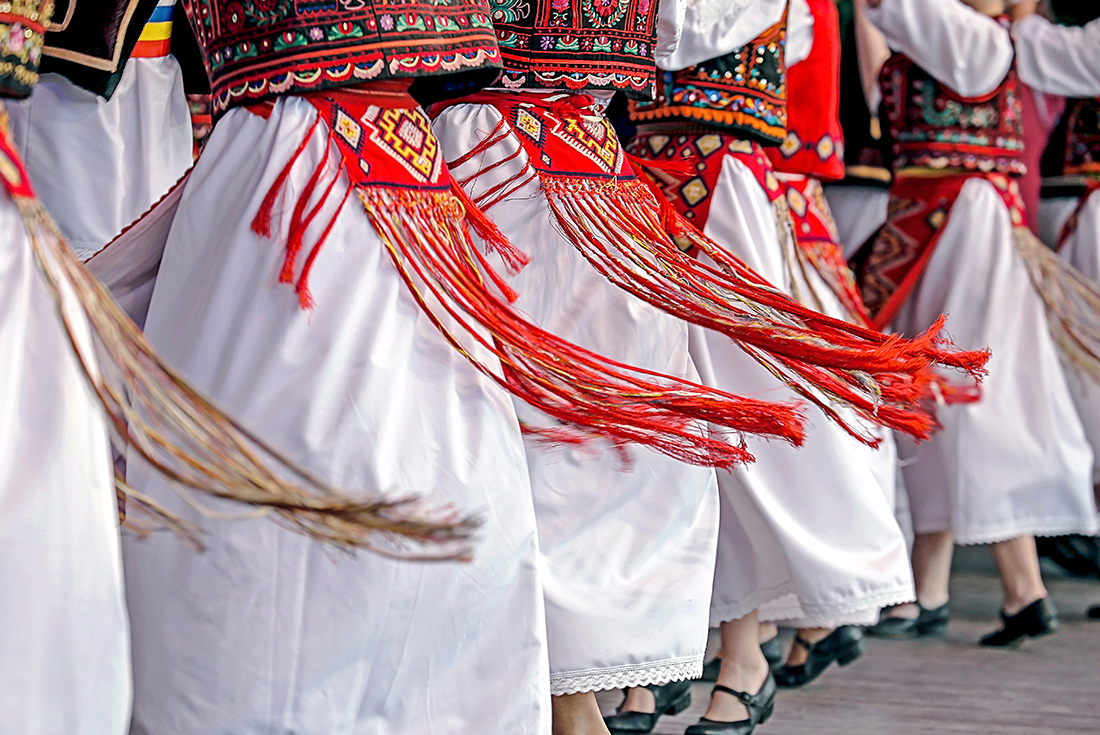 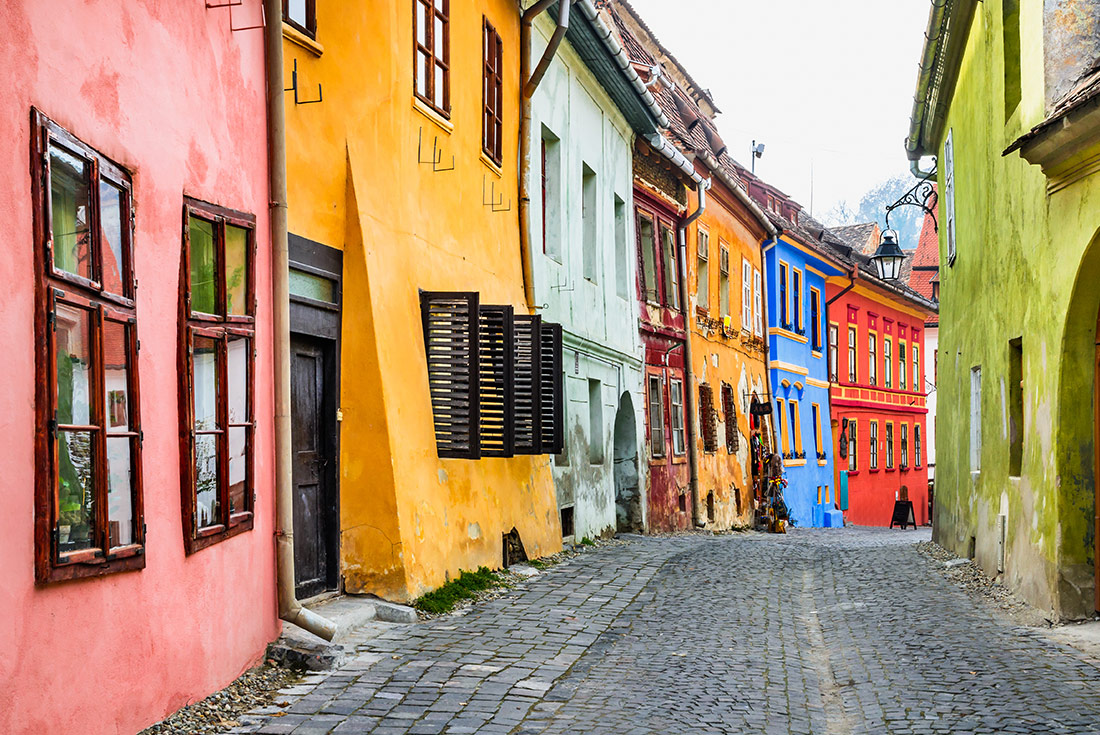 Enjoy a guided walking tour through the 'Little Paris of the Balkans'. Known for its Belle Epoch architecture, thumping nightlife and communist sites, Romania’s capital is home to one of Europe's biggest squares and a bevy of unique museums. You may also choose to take a guided tour of Romania’s most controversial building, the mammoth Palace of Parliament (or Casa Poporului, the ‘people’s house’). Built at the behest of Nicolae Ceausescu, last leader of Romania's Communist Party, it’s the second largest building—after the US Pentagon—in the world. Another option is to visit Bucharest’s Old Town, which is both a time capsule of Bucharest’s past and symbol of post-communist transformation, and bursts with art galleries, antique shops, coffeehouses, restaurants and nightclubs.

Heading north towards the Transylvanian city of Brasov you’ll first visit the spectacular Peles Castle in Sinaia. A stunning example of Neo-Renaissance architecture, Peles Castle rises from the Southern Carpathians like something out of a fairy tale. It was commissioned in 1873 by King Carol I and in 1883 became the summer residence of the royal family until the forced exile of King Michael I in 1947. Its 160 rooms are adorned with a staggering array of European artworks, chandeliers, stained-glass windows and more. You’ll then head deeper into Transylvania before stopping at Rhein Cellars in Azuga for a taste of sparkling wine produced using the traditional method of Champagne. Opened in 1892, the winery was recognized as "Supplier of the Royal Court" between the first and second world wars. Arrive in Brasov in the evening and enjoy a guided tour of this charming city.

After breakfast you’ll have a full day in and around one of Romania’s most popular destinations, Brasov. Also known by its German name of Kronstadt, the town was once a major medieval trading centre. First up is Bran Castle, Transylvania’s most famous link to the Dracula legend. Built in 1377 and perched on top of a 61-metre (200-foot)-high rock, its imposing towers and turrets make it easy to imagine Bram Stoker’s famous vampire calling it home, even if the Irish writer never visited Bran Castle himself. From 1920 to 1957 the castle was the summer residence of Queen Victoria’s granddaughter, Queen Marie of Romania, and features a display of her art and furniture. You’ll next visit Prejmer fortified church and Saxon village, the largest fortified church in Southeastern Europe. Built by Teutonic knights in 1212-1213 and today a UNESCO World Heritage Site, it’s a marvel of medieval design with massive walls that helped villagers survive many attacks from the Turks.

Travel back in time with a drive through pristine Transylvanian countryside to the ethnic Hungarian-Szekler village of Miclosoara. Check in to Count Kalnoky’s Guesthouse, an authentic, 18th-century hunting lodge consisting of four carefully restored buildings, all beautifully furnished with antiques in the Transylvanian Szekler and Saxon style. Enjoy a locally prepared lunch at the guesthouse, and then perhaps head out for a walk through a landscape of rolling hills and wildflower meadows, to discover why this historical region of Transylvania is called 'The Woodlands'.

Continue on this morning to the village of Viscri. Originally inhabited by Saxons from the Luxembourg area for over 800 years, this idyllic village of red-tiled roofs is a World Heritage site that’s benefitted from the preservation efforts of the local Roma community. Next, hop on a horse-drawn cart with a local coachman and discover the village from a different vantage point. Stop at Viscri’s Saxon-fortified church, from which the village got its name. It was built around 1100 by the Szekler population and taken over by Saxon colonists in 1185, who began fortifying it in the 15th-century. Be sure to go inside, as its classic 19th-century altar features a Blessing of the Children centrepiece by Romanian painter J. Paukratz. Visit a Viscri resident’s house for lunch and make the most of a unique opportunity to try a selection of fresh, traditional Romanian fare. It’s then on to Sighisoara, one of the most beautiful and best-preserved medieval towns in Europe.

After breakfast it’s time to explore the most seductive city in Romania. Sighisoara’s mix of original medieval architecture, winding cobbled alleys, steep stairways and secluded squares feel like you’ve stepped into a living history book. Another World Heritage site, the town was first settled by the Romans but flourished under the Saxons from the 12th century. Take a walk around the Old Town, which coils up a narrow hill and is surrounded on all sides by fortified walls, and explore the 64 metre (210 feet)-high clock tower that dominates the citadel. The town is famed as the birthplace of Vlad Dracul III, better known as Vlad the Impaler, whose name was the inspiration for Count Dracula. Vlad III is revered as a folk hero by Romanians for driving off the invading Ottoman Turks. You may also wish to take a trip to nearby Biertan, a timeless village boasting Romania’s largest Saxon fortified church.

After several days of Saxon villages and fortified churches you may be slightly bewildered by the Turda Salt Mine, your first destination on this busy day. It sounds impossible: An amusement park and museum 400 meters (1300 feet) underground in a shuttered salt mine that originally opened as far back as 1075. Yet inside the massive cavern you’ll find a giant Ferris wheel, a mini-golf course with six different tracks, tennis courts, and even an underground lake. Afterwards continue on to Alba Iulia. Also known as Apulum in ancient times, when it served as a political, military and cultural centre during the Roman occupation, this city is where the union of Transylvania and Romania was declared on 1 December 1918. Visit Alba Iulia’s spectacular baroque fortress, constructed between 1716 and 1735 and consisting of seven bastions in a stellar shape. Call it a day with a drive to another medieval wonderland, the unabashedly bohemian city of Sibiu.

After a guided walk this morning, enjoy a free day to explore Sibiu. Called Herrmannstadt when it was the wealthiest and largest of the Saxon strongholds, Sibiu retains a medieval Germanic feel to this day. Perhaps head to Grand Square for a coffee and some people watching, or stroll along the medieval walls on the town's perimeter. While most of the historic sights are in the Upper Town, make sure you take a wander through the Lower Town, a tangle of streets lined with colourful houses. The well-preserved Citadel of Sibiu is one of the finest in Romania. Admire the Tower of Stairs, Sibiu’s oldest building, as you amble along the 13th-century Passage of Steps. You can admire icons and Romanian impressionists in Sibiu's Brukenthal Museum, or stroll to the nearby Liars' Bridge, Romania's oldest cast-iron bridge, which is said to collapse if you tell a lie when standing on it. Perhaps visit the 14th-century evangelical church, where the son of Vlad the Impaler was stabbed.

After a short drive from Sibiu to Carțișoara you’ll see breathtaking mountain scenery via the Transfagarasan Road to Balea Lake. Meandering through a glacial valley—and once called the ‘the greatest road in the world’ by the Top Gear TV show—Transfagarasan Road connects the highest peaks in the country, Moldoveanu and Negoiu, and therefore sections are closed during winter. Situated at an altitude of 2034 metres (6673 feet), Balea Lake sparkles beneath the rugged peaks of the Fagaras Mountains in the Carpathians. The astonishingly picturesque glacial lake draws visitors from around the world. For lunch you’ll dine at one of Nicolae Ceaușescu’s former hunting lodges. Afterwards, enjoy the scenery on the drive from Transylvania to Bucharest. Perhaps enjoy a final Romanian feast with your group at one of Bucharest’s many fine eateries.

Your trip comes to an end after breakfast this morning. If you’d like to stay on in Bucharest, we can help arrange additional accommodation for you on request. Why not soak up all that historic Bucharest has to offer on an immersive one-day Urban Adventure tour? Visit urbanadventures.com for more details. 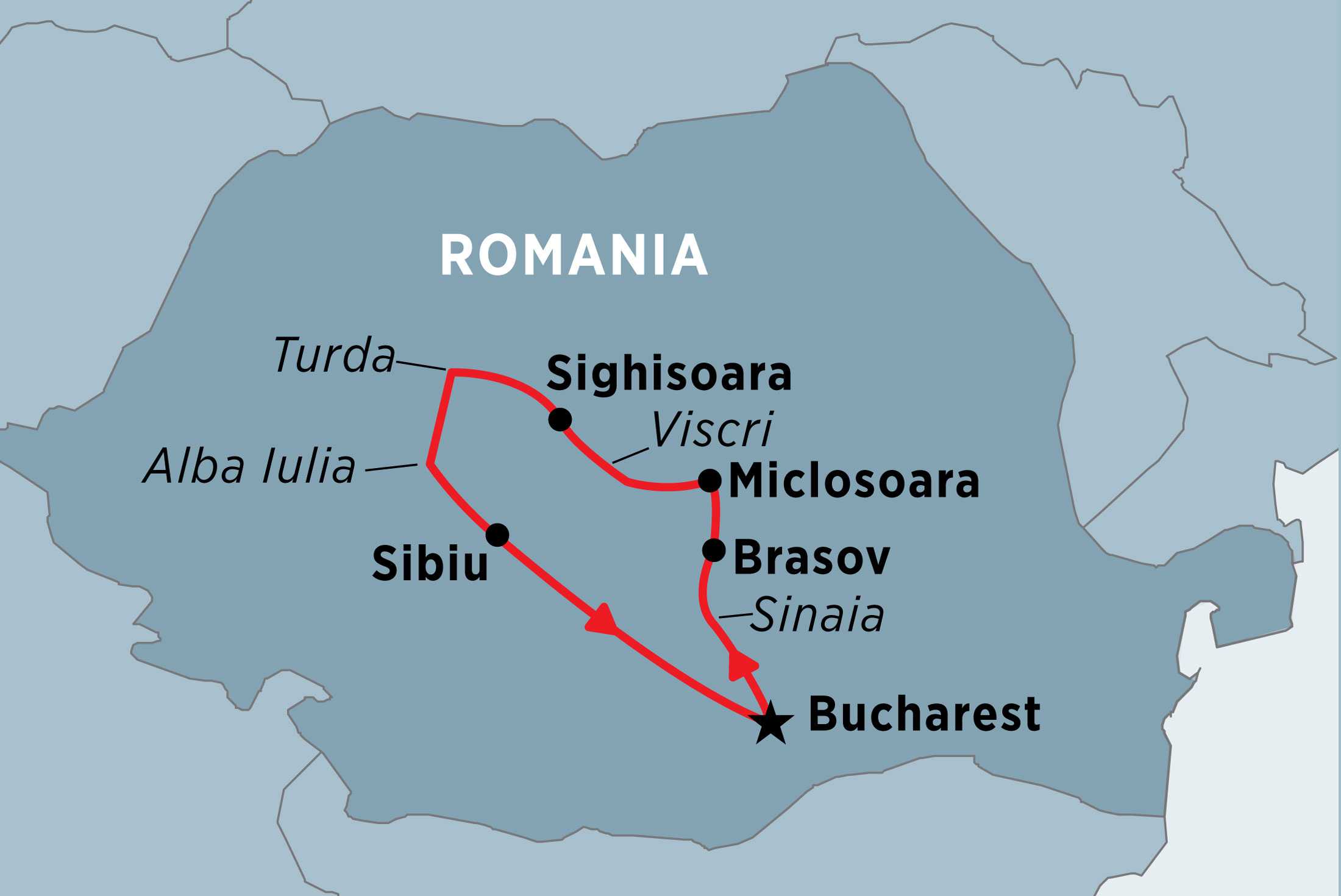