Marvel at ancient Inca architecture in the fertile Sacred Valley before discovering the mother of all Inca cities – magical Machu Picchu – on two insightful guided visits.. The giant desert inscriptions of the Nazca Lines are one of Peru’s great unsolved mysteries. See them up close on foot or from up in the sky on an unforgettable optional scenic flight.. Look out for pelicans, flamingos, sea lions and penguins on a boat tour through Paracas National Reserve, and gaze into the deep ravine of the Colca Canyon with condors circling overhead.. The floating reed islands of Uros on Lake Titicaca are a marvel of concept, construction and history. Take a boat tour on the world’s highest navigable lake and spend two nights on a private island.

Uncover Peru’s best on this 18-day journey through lush valleys and Inca heartlands. Travel south from Lima to the rich marine ecosystem of Paracas National Reserve, visit the confounding Nazca Lines and see condors circling some of the deepest ravines in the world at Colca Canyon. Consider trekking along the acclaimed Inca Trail, or relax on a scenic train ride, all to witness the magnificence of the ancient citadel of Machu Picchu. With a local leader each step of the way joining you on orientation walks and filling you in on the histories of the land, you’ll get to peruse Peru the local way. 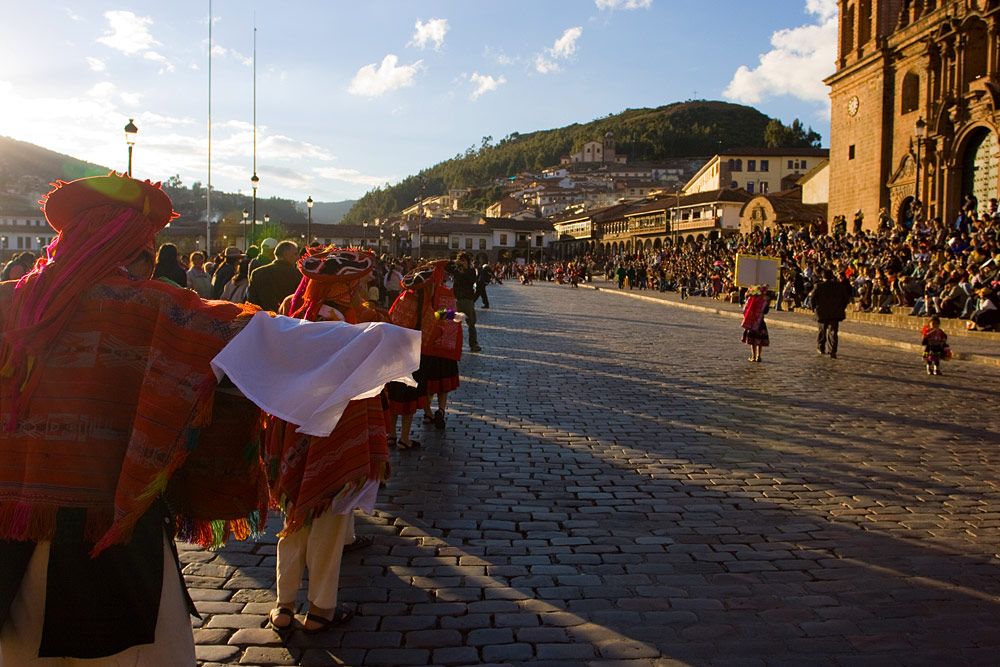 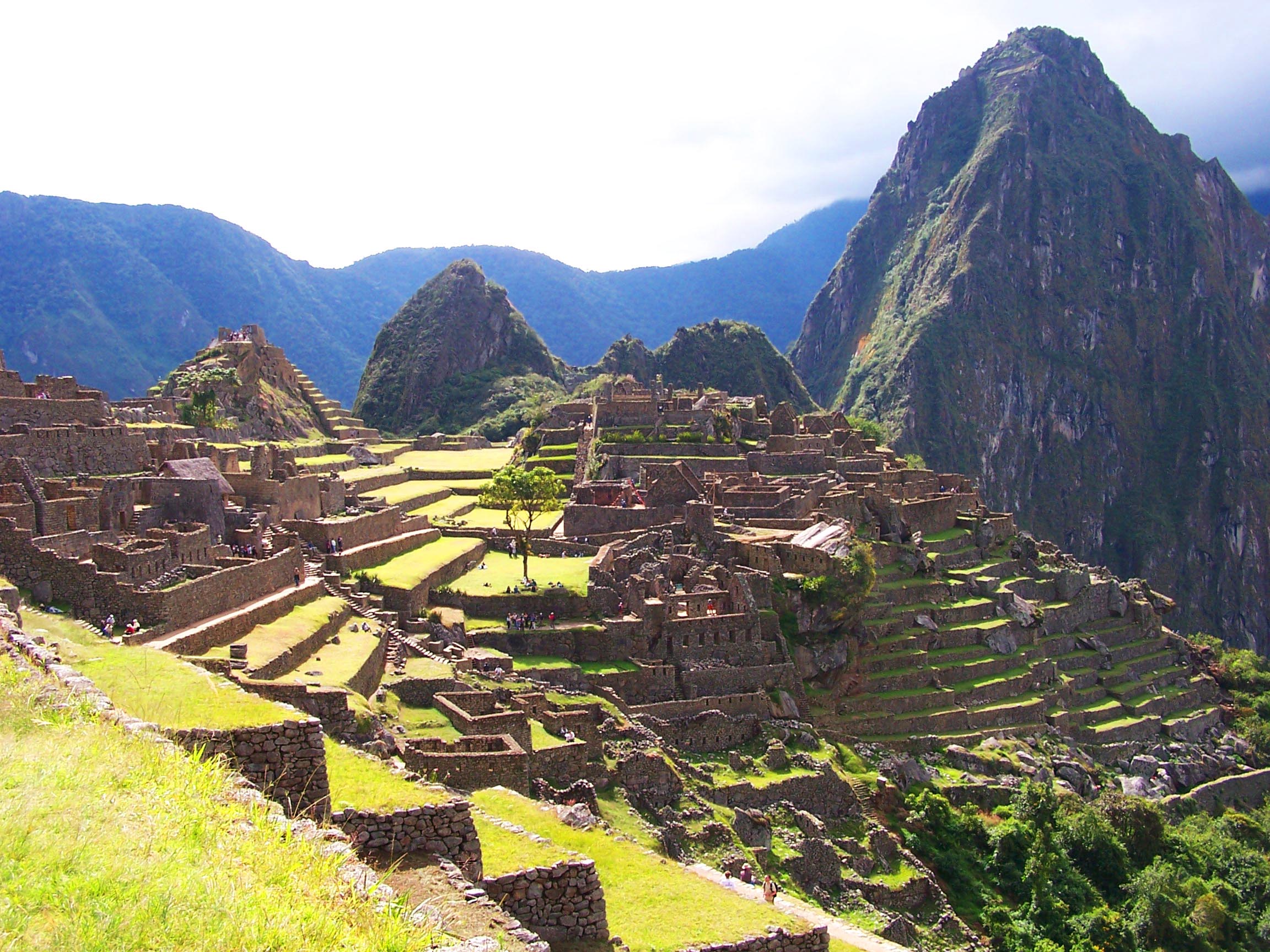 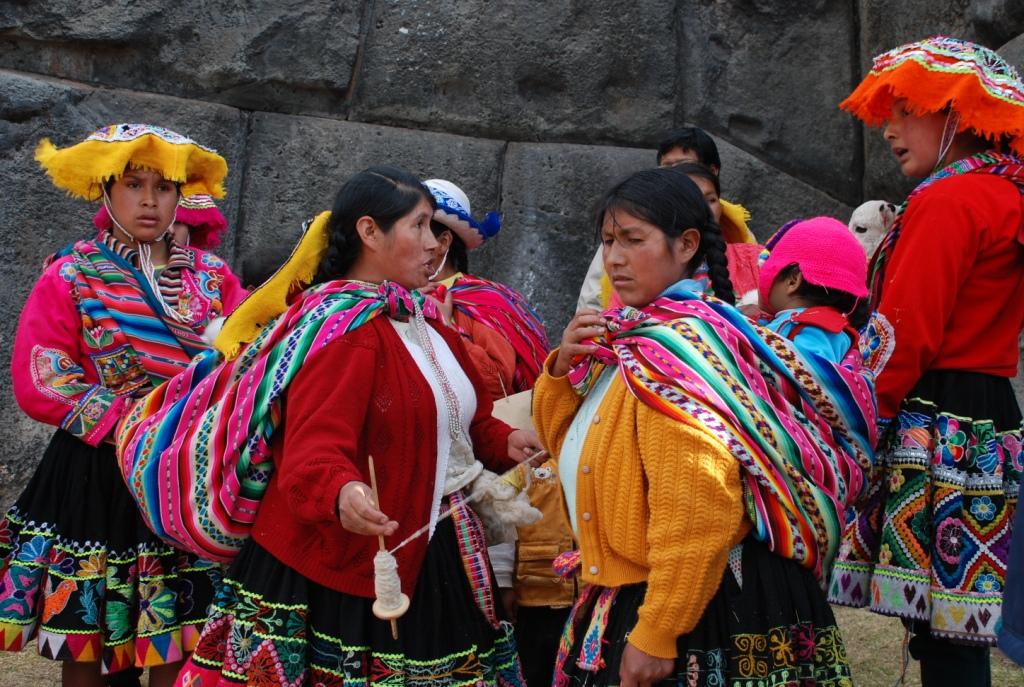 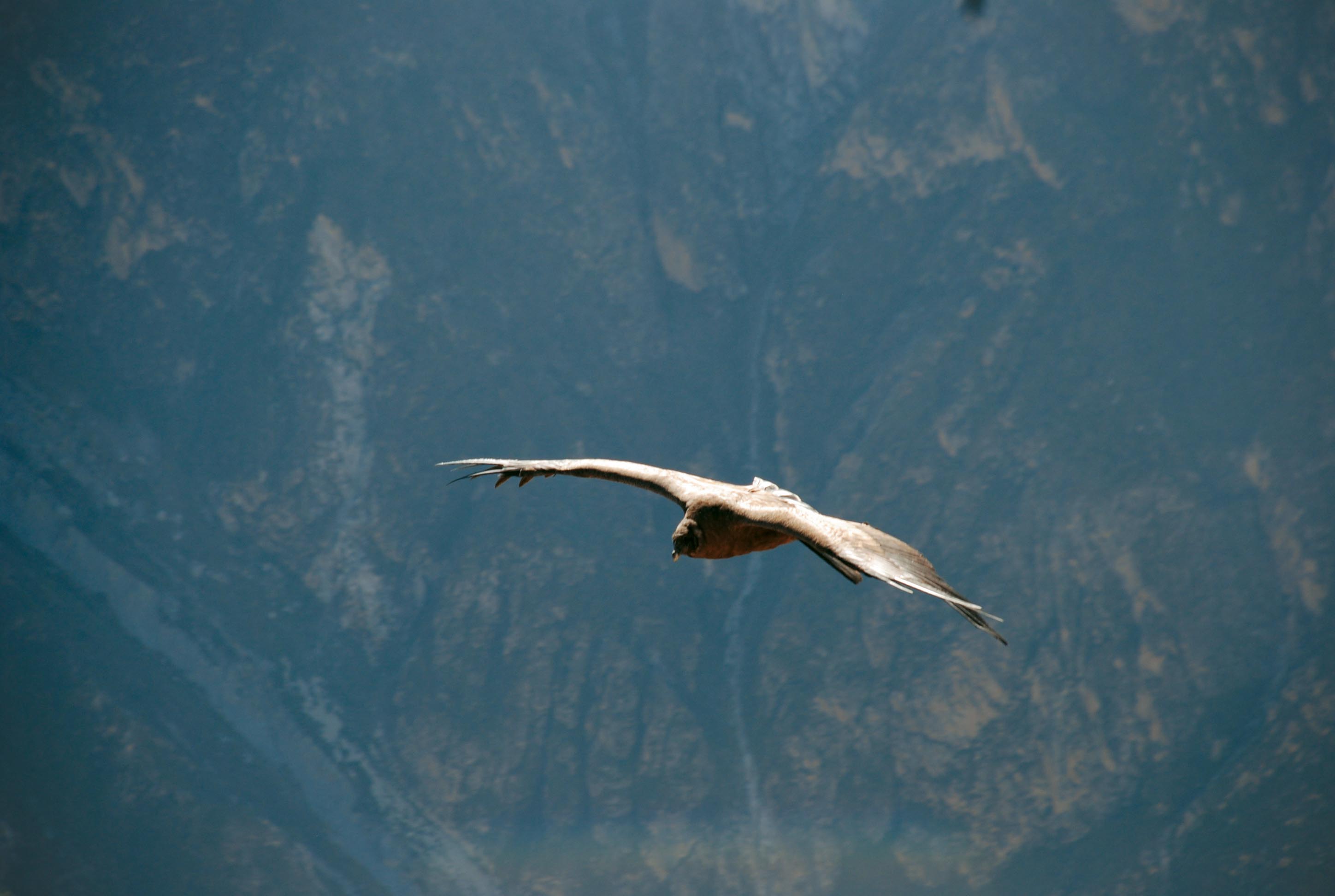 Welcome to Peru! On arrival into Lima's Jorge Chavez International Airport you will be transferred to your hotel. Meet your leader and fellow travellers for a pre-trip briefing, usually held at 2 pm. Please check the noticeboard near the hotel reception for confirmation of the location of the meeting. After the meeting your leader will take you on a brief orientation tour of the Miraflores area – your in-depth city tour will take place tomorrow morning. Lima has some of the best cuisine in South America and is especially renowned for its seafood. Perhaps sample Peru's national dish of ceviche – raw fish cured in lime juice and often served with hot peppers.

This morning at approximately 8 am your leader will take you on a walking tour of downtown Lima, including the city's historical centre. Flanked by streets of ornate mansions, palaces and churches, Plaza Mayor is the best place to start any exploration of Lima. Take a walk through the old streets to get a feel for colonial life. On one side of the plaza is the Cathedral of Lima, which houses the remains of Lima's founder, Francisco Pizarro. You have an included visit to the nearby San Francisco Monastery, with its catacombs containing some 70,000 human remains. Continue on to the Central Market where you'll take a walking tour. The market has a huge variety of fresh produce on offer, including fruits, vegetables and even guinea pigs. You'll also have the opportunity to try some local Peruvian fruits and street food. Next, head away from the tourist trail and visit Alameda de Chabuca Granda, an area really only known to locals. It's a place where people go as a treat to enjoy a variety of local street food and authentic Peruvian desserts such as ‘mazamorra morada’, a sweet porridge made from purple corn, or ‘picarones’, Peruvian donuts made from local squash called macre and sweet potatoes served with a sweet syrup – both are a must to try while in Peru! Later in the afternoon, travel by minivan for approximately 4 hours to Paracas, arriving in the early evening.

This morning, rise early for an excursion to the Ballestas Islands. We will depart the hotel at approximately 7.30 am. Make your way to Paracas port to board a boat at approximately 8 am. The Ballestas Islands are home to an abundance of wildlife, including pelicans, red-footed boobies, flamingos, sea lions and even penguins. You'll have the opportunity to see wildlife up close on a boat tour of the islands (approximately 1.5–2 hours). Afterwards, drive to Nazca (approximately 3 hours) with a possible stop at Huacanchina – a small lakeside village – on the way, if your group chooses. On arrival in Nazca, visit the viewing platform to see the famous Nazca Lines. Etched into the landscape some 22 kilometres north of Nazca, these mysterious wonders are an assortment of perfectly straight lines, trapezoidal zones, and strange symbols of birds and beasts on a giant scale. For another perspective on the Nazca Lines, opt for an aerial tour this afternoon. The plane ride lasts for around 30 minutes and covers the 26 figures scattered throughout the desert. Although bumpy at times, the experience is unforgettable.

Early this morning, make the 10–12 hour journey (depending on traffic and stops) to Arequipa by private van. The trip may be long, but it's well worth the effort. There will be toilet and lunch stops along the way. Arequipa is a beautiful Spanish colonial city. Known as La Ciudad Blanca (The White City), the buildings have been built almost exclusively from a white volcanic material called sillar. The city lies in a valley at the foot of the El Misti volcano – a perfectly shaped cone.

Enjoy a walking tour of Arequipa at around 9 am with a local guide. Explore the main square, the Santa Catalina Monastery, the San Ignacio Chapel with its colonial mural paintings and the suburb of Yanahuara. The tour will finish at approximately 1 pm, just in time to cosy up at one of the plaza's cafes. Another option is a visit to the museum that houses 'Mummy Juanita' – the well-preserved body of a young Inca girl who died sometime between 1450 and 1480.

Take a free day to further explore the laidback city of Arequipa. Pick up an Alpaca jumper and meet the llamas and alpacas of Mundo Alpaca, stroll to the pretty, peaceful neighbourhood of Yanahuara or take part in any optional active adventures in the surrounding hills and rivers.

This morning will begin at approximately 8 or 9 am, depending on what the group decides. Drive through the Altiplano – high plains – to the Colca Valley and Canyon. This drive takes approximately 5–6 hours including stops. On the way you'll see grazing vicunas, llamas and alpacas, as well as stone cairns built by local indigenous communities. More than twice as deep as the Grand Canyon, the Colca Canyon provides some breathtaking views. The pre-Inca terraces carved into its walls are still cultivated today, and traditional Indian villages are dotted around, where it's possible to see locals in colourful traditional dress. Stop at the highest point (4910 metres) to enjoy views of the bleak landscape below and the snow-capped volcano of the Nevado Ampato in the distance. At this point you might notice the thinner air, but after taking some photos you'll quickly get back in the vehicle and descend to a lower altitude. Continue on to the town of Chivay, where you'll have some time to visit the local hot springs. In the evening, you may wish to visit a local 'pena' to enjoy a Peruvian dance and music show. Spend the night in Chivay.

Around 6 am this morning, you'll visit the Cruz del Condor viewpoint, where Andean condors, one of the world's largest flying birds, can often be seen soaring in the air. This journey will take approximately 5 hours return. After lunch it's about a 6-hour (including stops) drive to Puno. On the way the group will stop at the Sillustani archaeological site. The ruined 'chullpas', or funeral towers, of Sillustani were built by a pre-Inca civilisation centuries ago to house the remains of noble men. Located on the shores of Lake Titicaca, Puno is full of Aymara and Quechuan Indian culture. The town is known as the folklore capital of Peru and is renowned for its traditional dances.

Be enchanted by the striking scenery and unique cultures on a cruise around Lake Titicaca today. As Lake Titicaca is the highest navigable lake in the world, the sun can be extremely strong, so make sure you wear a hat and sunscreen, even on cloudy days. This morning at about 8 am you will depart from the port in Puno for the floating Uros Islands. The boat journey will take about 30 minutes before reaching the Islands. The Uros people constructed these islands to isolate themselves from rival tribes in ancient times. They are built completely from multiple layers of totora reeds, which grow in the shallows of the lake. Call into Taquile Island for some woollen handicrafts. On the island, knitting is strictly a male domain, while women do the spinning. You will spend approximately 1–1.5 hours here. Later the afternoon you will travel a further hour or so to the private island of Suasi where you'll spend the next two nights.

This morning you will visit the cultural museum on the island which houses maps, pictures of the lake and books about the history of the lake and its communities. There are handicrafts and fabrics from the different groups that developed around the lake, types of Andean grains like quinoa, and a chance to learn about the process of painting wool. An easy late-afternoon walk (approximately 1–2 hours) will take you to the highest point of the island – the perfect place to witness an unforgettable sunset over the waters of Lake Titicaca. Enjoy a private picnic with drinks; a unique moment to soak in the beautiful landscape, appreciate the serenity and – if the clouds behave – watch the sun go down.

Around midday (12 pm) today, travel back across the lake to Puno. On the way you will be provided with a packed box lunch. Enjoy a free night in Puno to explore, eat dinner at a local restaurant or relax in the hotel. Puno is famous for its festivals. If you're lucky, your visit might coincide with an evening parade, when the streets fill with costumed dancers and musicians.

This morning, continue to Cusco by private van. This will be a long ride with opportunities to stop for breaks, but you may want to stock up on snacks for the journey. Cusco is South America's oldest continuously inhabited city, and was the home of the Inca for two centuries before the Spanish built their first capital here. Today Cusco is a fascinating combination of both cultures. At 3450 metres (11,150 feet) above sea level, it’s important to take time to acclimatise to the city’s altitude. After settling in at the hotel, take a casual orientation walk around the hotel and Plaza de Armas with your leader. This tour will also include a visit to the Cusco Cathedral with specialist guide Professor Alfredo Hinojoza Galvez. Alfredo was born and raised in the city of Cusco. He studied at the National College of Sciences of Cusco and later studied Administration and Tourism then a Masters in Colonial Art at National University San Antonio Abad del Cusco (NUSAAC). Alfredo has served as Dean of the College of Tourism and has published eight books, including a guidebook for the Touristic Tour of the East Valley. He is considered an icon among colonial art and tourism students for his impressive career spanning 30 years. Alfredo will be uniquely placed to offer special insight into Cusco Cathedral, which is also a World Heritage site. 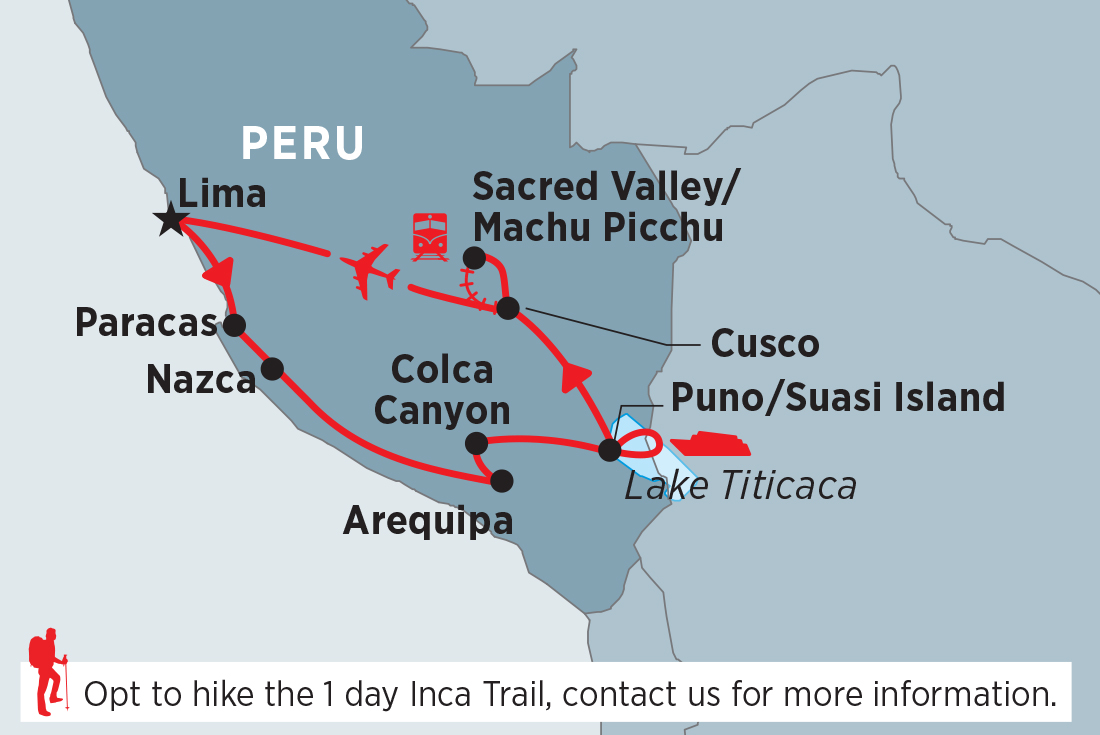